From creepy castles and petrifying palaces to nauseating nature reserves and spirit-filled underground avenues, the UK is brimming with ghoulish locations to hit up for Halloween 2021

As the nights draw in and Halloween looms, it's time to prepare a petrifying programme of places at which to scare yourself stupid. Luckily for phantasm stans, this country is absolutely full of them. Here's our pick of the most beastly where, if you're unlucky, you may well meet hanged witches, malevolent poltergeists, screaming apparitions – or even a spectral spaniel or two. Just keep telling yourself they're not real, OK?

The palace with a ghastly guide in London 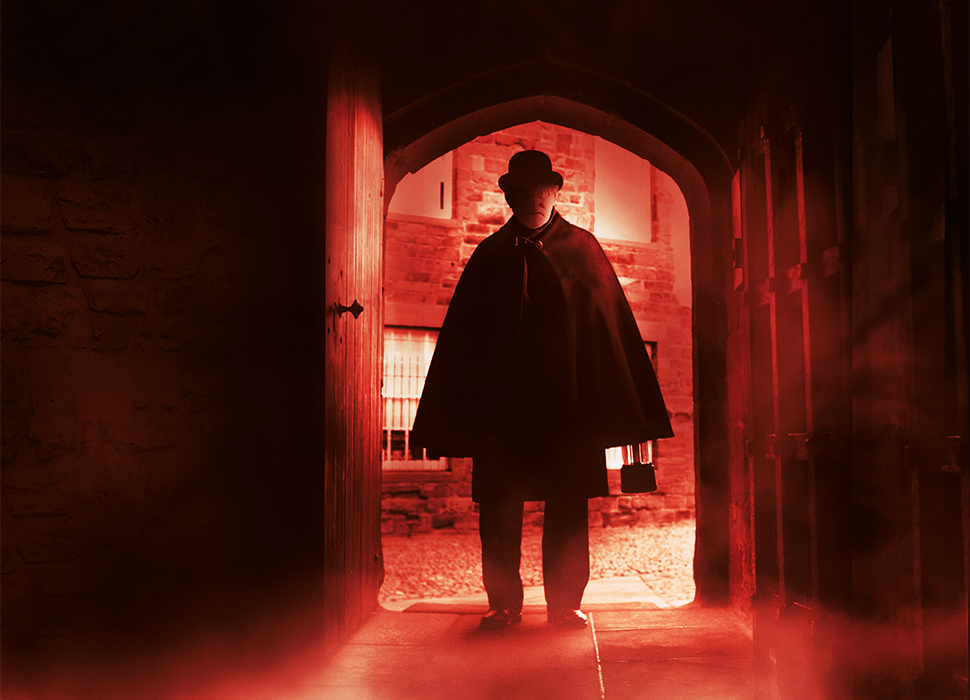 Make sure to follow the right guide at Eltham Palace this year / Image: © English Heritage

As you’d expect for such a storied city, London is chock-full of choice spookers. There's a spectral bear at the Tower to London. Two of Henry VIII’s ex-wives at Hampton Court Palace (including a screaming Catherine Seymour). Even a Millbank pub, The Morpeth Arms, that has a CCTV link to the haunted basement below. Southeast London’s mash-up art deco / medieval Eltham Palace has a wraith of its own – a former member of staff who died a week after retiring, but is still spotted giving guided tours from the afterlife. This year, English Heritage is running a series of bone-chilling Halloween ghost walks of its own around the palace (but with a more conventionally corporeal guide).

A sinister subterranean street in Edinburgh 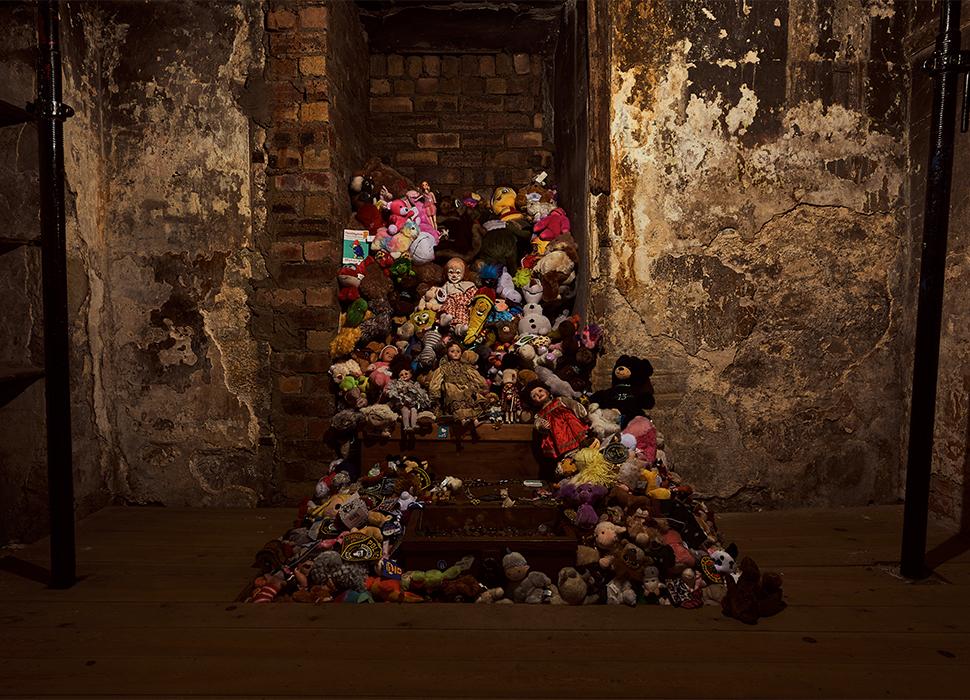 Edinburgh’s only preserved 17th-century street is a subterranean wonder – hidden under the city’s Royal Mile. Down there, visitors can explore a tight warren of passages and streets, learning about those who lived and – crucially – died here (all the while avoiding the scatological cries of “Gardyloo!’ from the upper windows). Real Mary Kings Close isn’t a haunted hotspot per se – but it does have one spirited resident in the form of Annie. This nine-year-old spectre was contacted by visiting Japanese medium Aiko Gibo in the 1990s. Now, visitors leave dolls and other gifts to comfort the lost soul, who, according to Gibo, was wandering the dark streets looking for her parents. 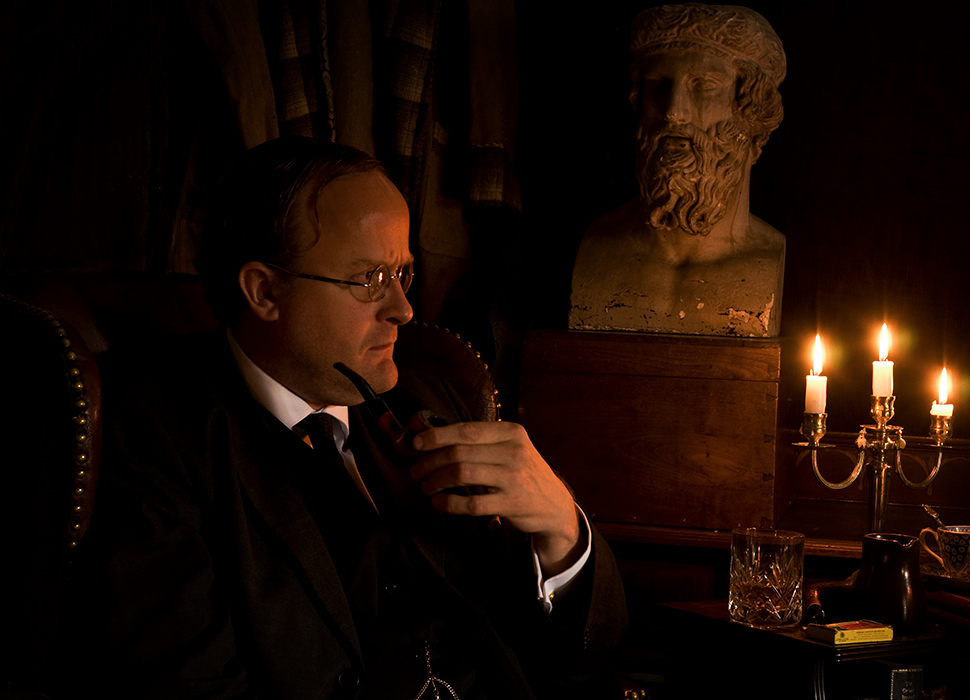 Prepare for the heebie-jeebies with one of Nunkie's classic readings

Robert Lloyd Parry – the old-world, tweed-bedecked storyteller, whose one-man show also goes under the name 'Nunkie' – is the UK's pre-eminent performer of weird and horrifying tales. He can most often be found in pubs, chapels and arts centres across the UK, recounting stories by ghostly impresarios like HP Lovecraft, MR James and Arthur Machen by candlelight to affrighted audiences. These 'rehearsed readings' are wicked, but Lloyd Parry also runs weekly art-historical and spooky literary tours of Cambridge. 'Ghost Writers on the Cam' aims to revive the forgotten horror traditions of this atmospheric city (and put "some flesh back onto mouldering literary bones", he says); while 'VII Strange Stories from the Fitz' explores the outré stories behind seven forgotten images at the local Fitzwilliam Museum. Whatever your poison, anything Nunkie-related is a chilling must at this time of year.

An entire haunted village in Kent 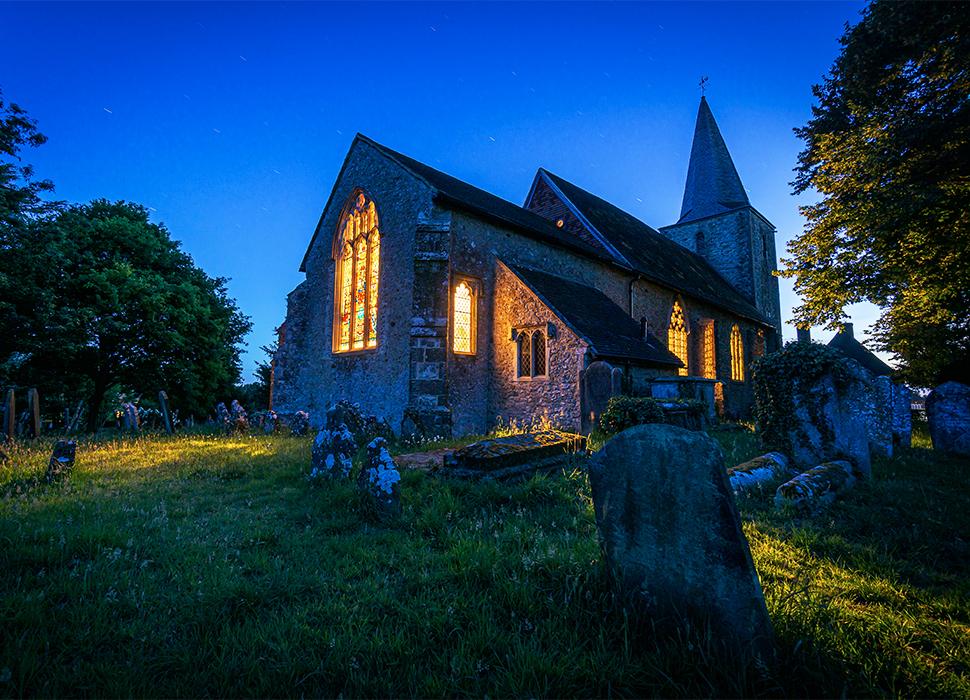 The Kentish village of Pluckley is Britain's most haunted / Image: Getty Images

What could be eerier than one ghost? An entire village of them, that’s what – and that’s exactly the deal with Pluckley in Kent. This seemingly benign little settlement, about an hour east of Gatwick, is home to 12 of 'em. There’s a pipe-smoking old crone near the village bridge. The still-swinging body of a suicided schoolmaster in the trees near Dicky Buss’s Lane. The rose-clutching ghost of beautiful local Lady Dering, known at 'the Red Lady'. Best (or, we suppose, worst) of all? The phantom of a man smothered by a falling wall of clay near the railway station, who is still heard shrieking in the same manner as when he perished. Estate agents must despair.

A weeping wetlands wraith near Belfast 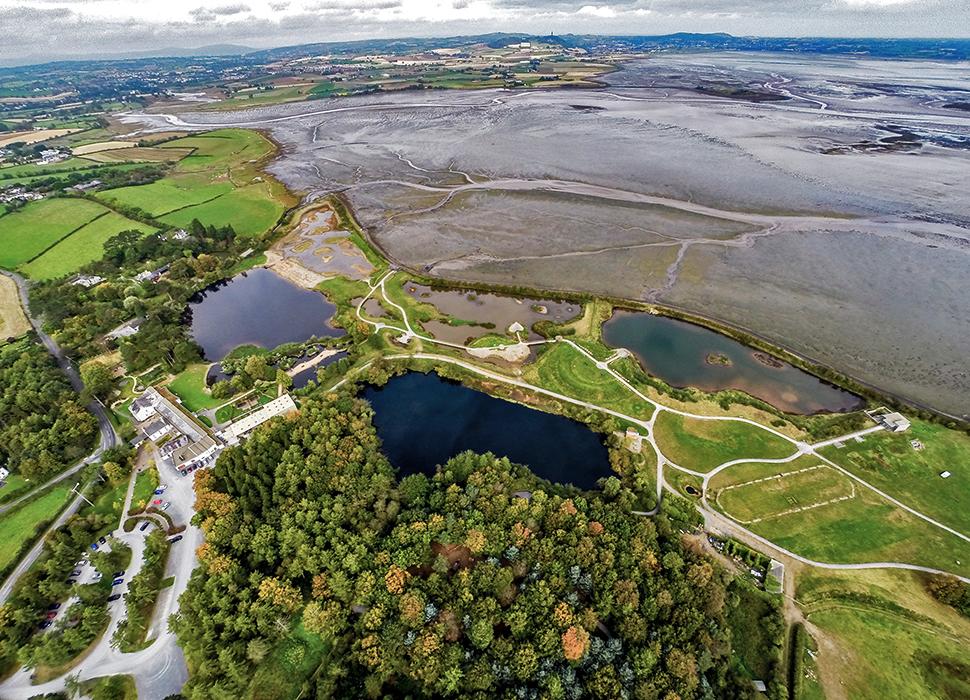 Peer hard enough and you might see the wretched wraith of a young girl at Castle Espie / Image: @WWTCastleespie

Haunted waters – as The Woman in Black, The Innocents and The Grudge made quite clear – have an especially unsettling effect on the faculties. Castle Espie reserve near Belfast brings this to horrifying life (or afterlife?). The 60-acre wetlands, with gorgeous views across Strangford Lough, are home to Northern Ireland's greatest collection of exotic and native ducks and geese – as well as the ghost of a Victorian girl in a ripped shawl carrying a lantern and a baby, desperately seeking help and warmth (but who disappears behind a tree when approached).

A crumbling castle near Bournemouth 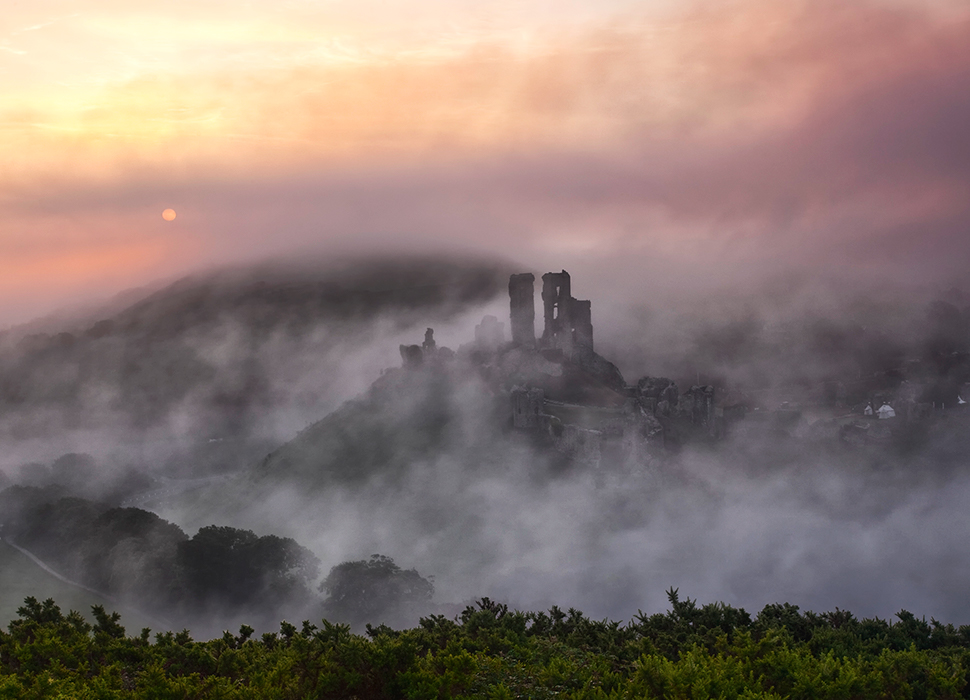 Corfe Castle – a ruined hilltop fort on the Isle of Purbeck in Dorset – is a true icon, its ragged battlements one of the country’s most eerily pervasive images of the English Civil War. A former Royalist stronghold, it was ‘slighted’ by Parliamentarians in the late 17th century, giving it the eldritch appearance it retains today. Ever since the war, a headless white ghost has been seen wandering the ramparts – supposedly of the woman who betrayed its owners to the Roundheads in 1645.

A full house of phantoms near Bristol 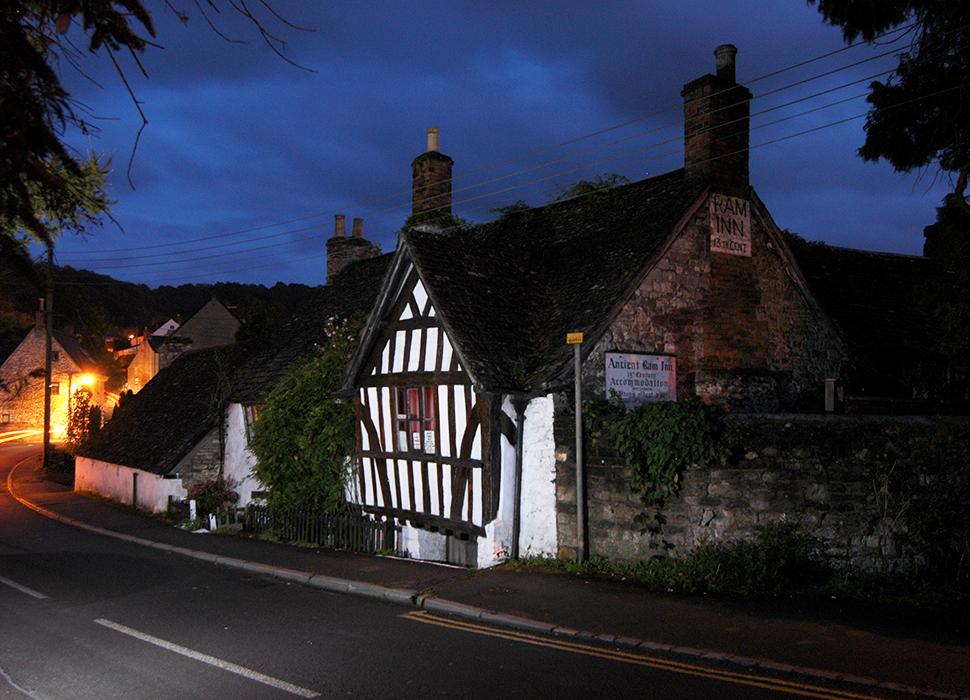 Friends of the devil in Glasgow 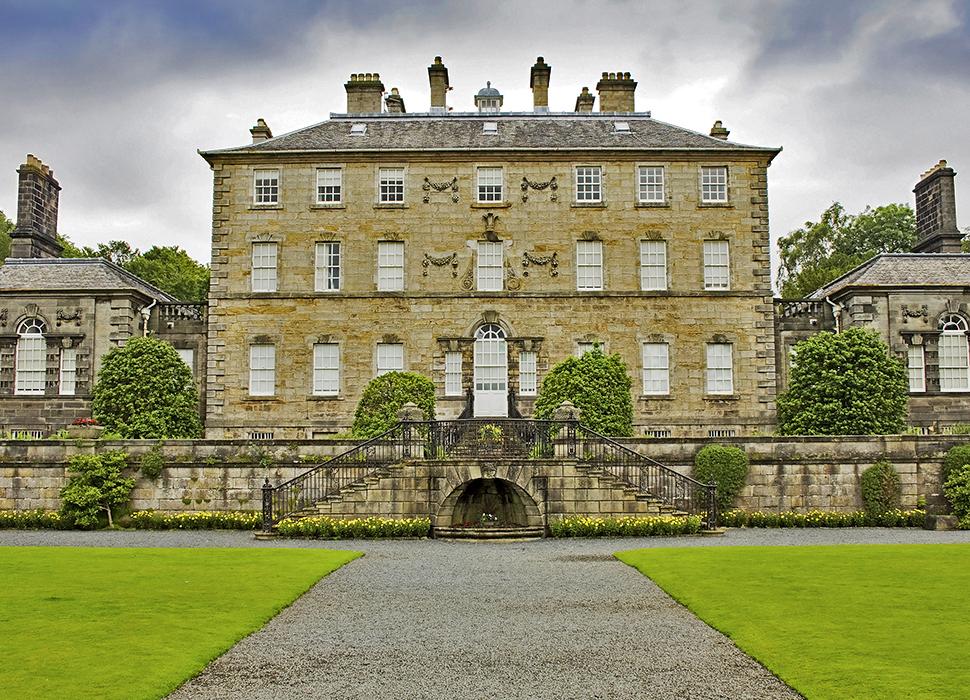 The stately home of Pollok House – owned by the Scottish National Trust and sitting proud in Pollok Country Park to the south of Glasgow – is much loved for its collection of classic Spanish art and grandiose Georgian architecture. But it’s also possessed of a creepy history. Back in late 1600s, a little after the height of the witch trials, a mute serving girl arrived at the house, which was then owned by famed witch-hunter Sir George Maxwell. He soon fell ill; she regained her speech and accused five locals of running with the devil, and they were subsequently burned on the grounds. They must have had taste, as their spirits are still said to appear around the park’s fancy Burrell Collection art museum.

A deathly dog-handler near Birmingham 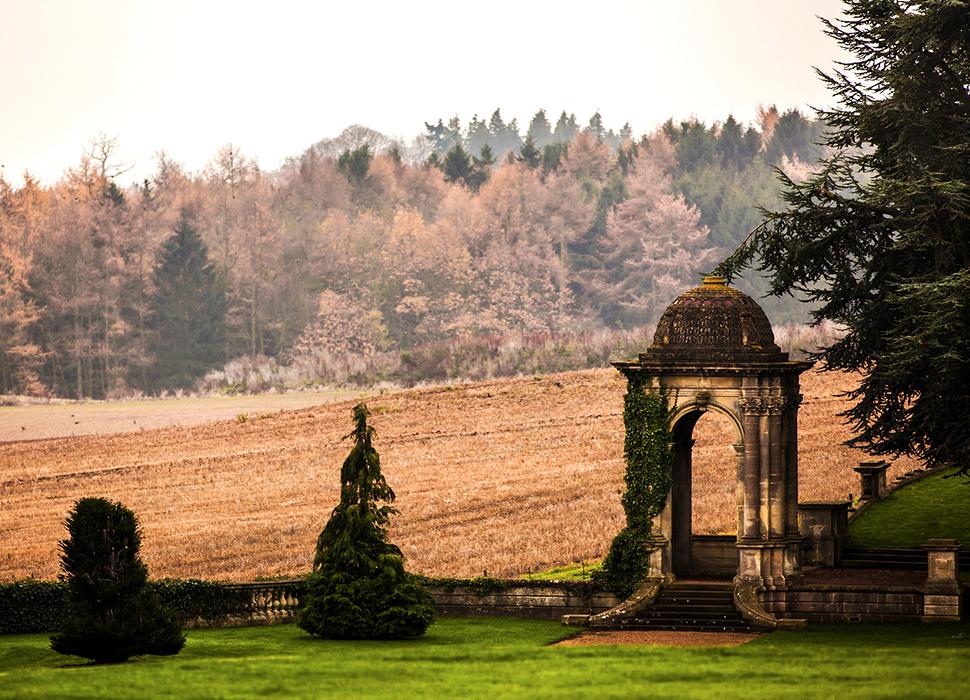 The spirits of a man and his pooch still wander Witley Court's gardens / Image: © English Heritage

Once an opulent mansion and the setting for lavish society parties, Witley Court was gutted by fire in 1937, rendering the house the ruin it is today (though the landscaped gardens, with their resplendent Perseus and Andromeda fountain, are still utterly lovely). This maudlin past lives on in the mysterious sounds and apparitions – including the phantasms of a man and his dog – which still roam the grounds. English Heritage is running Halloween walking tours around the site this month – perfect for those who like a bit of storytelling with their heebie-jeebies.

A contemptible coven near Manchester 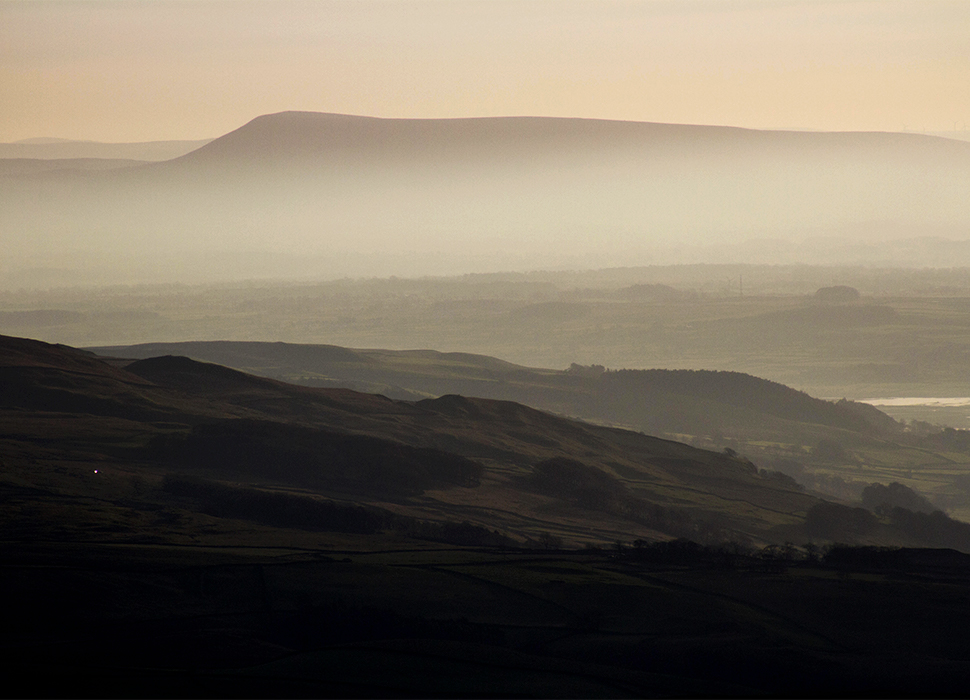 The brooding plateau of Pendle Hill saw one of Britain's most brutal witch trials / Image: Alamy

Brooding above the Lancashire countryside, Pendle Hill and its surrounding villages are associated with one of the darkest events in English history. The area’s 1612 witch trials saw 12 locals (drawn from two families headed by matriarchs Demdike and Chattow) charged with the murder of 10 people by way of black magic. Only one would emerge alive, as 10 were found guilty and hanged on the moors above nearby Lancaster (one, arguably more fortunately, died in prison awaiting trial). VisitLancashire has devised an excellent self-guided walking tour of notable spots associated with the doomed harridans – from Faugh’s Quarry, where Demdike met the devil, to the village of Newchurch, where Chattow was said to have stolen teeth from skulls in the churchyard, and the bleakly looming hill itself.