The best farm-to-table and hyperlocal restaurants in the UK

Food miles are so last decade – these days, the most innovative chefs are looking to the world directly outside their doors for both inspiration and ingredients. These are the finest super-seasonal and local restaurants in the UK

Coombeshead Farm is a gastronomic no-brainer. But while you're in the south-west, make sure to check out the best places to eat in Cornwall.

And embrace your ethical initiatives further with 11 astounding ethical, green and off-grid holidays to sate your inner eco warrior. 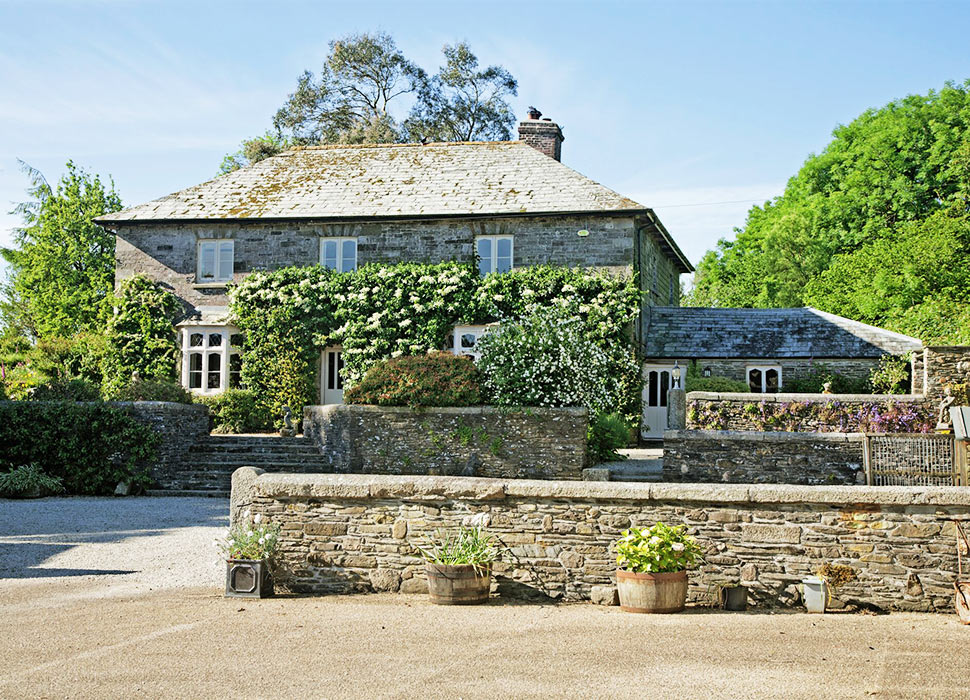 The Coombeshead farmhouse in its stone-faced glory

When Tom Adams (founder of London barbecue pioneers Pitt Cue Co) and April Bloomfield (of New York’s ignominiously-closed-but-formerly-feted gastropub the Spotted Pig) took on a sprawling farm near the Devon/Cornwall borders, they probably didn’t expect to become figureheads of the farm-to-fork revolution. But lo: Coombeshead is it. A stay here is as idyllic as epicurean escapes come: amble the 66 acres of copse-flecked meadows and eyeball the furry mangalitsa pigs, before retiring to the farmhouse for pre-prandial nibbles then stumbling to the restaurant for five courses of superlative, super-seasonal fare overwhelmingly raised, grown and fermented on site. 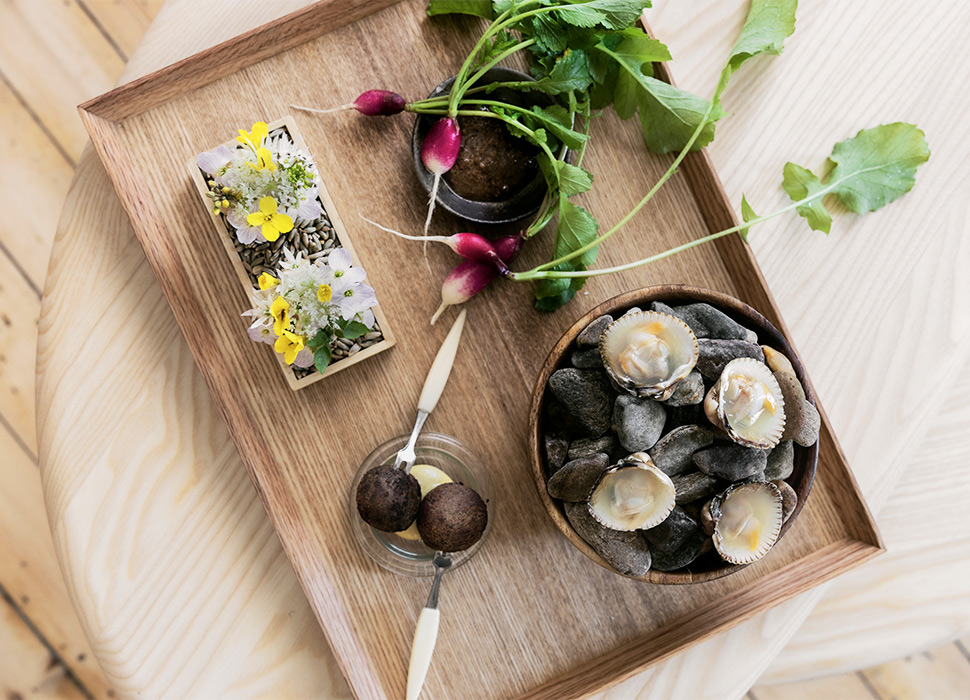 An ace edible assemblage on the shores of Loch Fyne / Image: Alexander Baxter

Trek west of Loch Lomond to a wild stretch of the Loch Fyne shore and you’ll happen upon Inver – a diminutive, white-walled pile that also happens to offer one of Scotland’s most thrilling feeds. Chef Pam Brunton put in the hours at Noma and Faviken, and drags the seasonal New Nordic ethos into her contemporary (and historically minded) Scottish cooking. Shellfish is pulled from the loch’s languid shores; local gardeners and foragers supply veg, hedgerow greens and other outré titbits; and mainstay meats like Gigha halibut (served with mussels and monks beard) and St Brides chicken (with nettle and black lime) come from feted Scottish producers. When stuffed, retire to a room to snooze it all off. 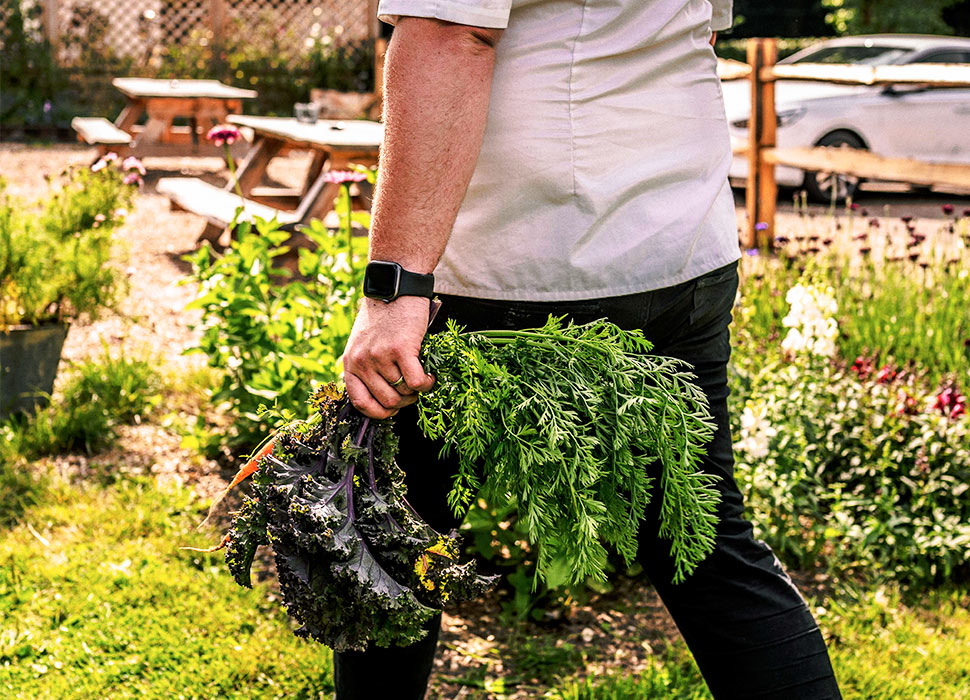 Will Devlin picking fresh carrots from the farm at The Small Holding / Image: Key & Quill

An early-career spell toiling in finicky London and hotel restaurants gave chef Will Devlin the impetus to return to his home turf of Kent. Piqued by the county’s killer produce, he opened The Small Holding in 2018, in a converted boozer in the bucolic village of Kilndown. Most everything on the menu comes from either the pub’s own dinky farm (they cultivate around 200 varieties of fruit and veg, and raise pigs, chickens and sheep), local farmers or hedgerows; every painterly little dish is reactively conceived as a reflection of the surrounding landscape. Inevitable were the accolades – a 2021 Michelin ‘green star’ among 'em. 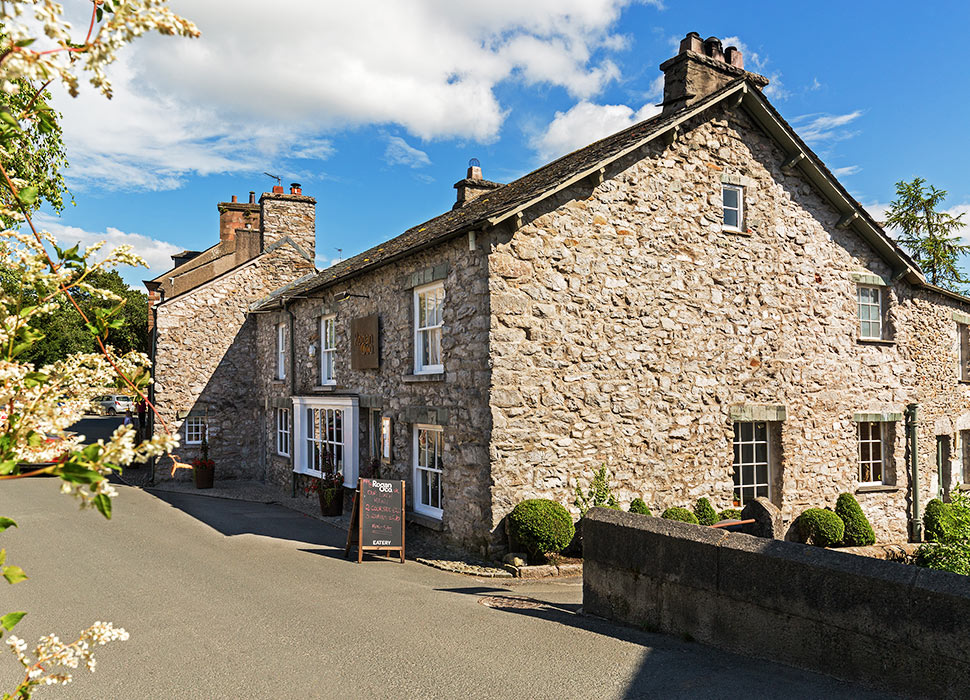 Despite the newfangled ‘green revolution’ brouhaha, Simon Rogan’s been knocking this stuff out at his totemic restaurant l’Enclume for 20 years. He’s opened another four since, but the pretty village of Cartmel in the Lake District remains his fiefdom. It's also home to Rogan & Co – a more informal sibling to l’Enclume’s lofty, hours-long menus. Ingredients are finagled from local growers and Rogan’s own Cartmel Valley farm, before being fed through a vaguely modern European wringer in dishes like cheese dumplings with onion dashi, hot-smoked chalk stream trout, fresh pea and jasmine, or lettuce brined in savory, cep mushroom, elderflower and nasturtium. 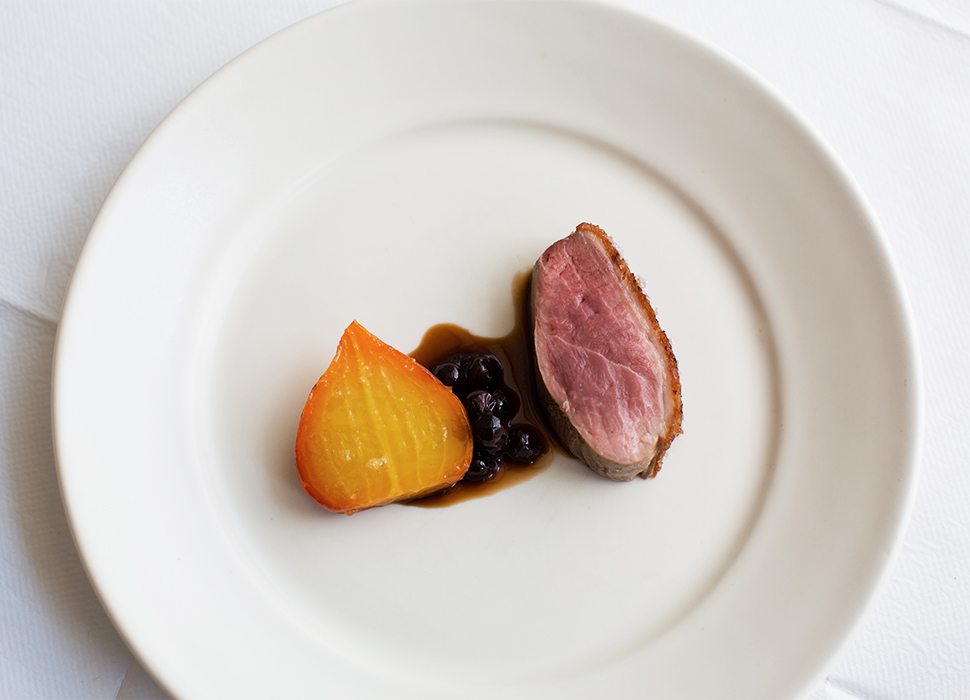 With its muted, Modern House-y interiors and cohort of softly spoken staff in Studio Nicholson clobber, Osip – located in the arty Somerset town of Bruton – is inevitably the hippest outpost in the hyper-local scene, and chef-founder Merlin Labron-Johnson its de facto poster boy. Which would be nothing if the food wasn’t good – but it’s monumental. Poetically conceived, meat-light menus – expect oca root with raw trout, bone jelly and smoked cream, say; or carrot soup with bread miso and egg yolk sabayon – are led by the availability of ingredients in Osip’s own kitchen garden, whatever local artisans are smashing out and the surrounding countryside; while there’s a top-tier list of British natural wines and ciders (plus further Old World bottles) to wash it down with. A mere £69 for the dinner tasting feels ludicrously good value. 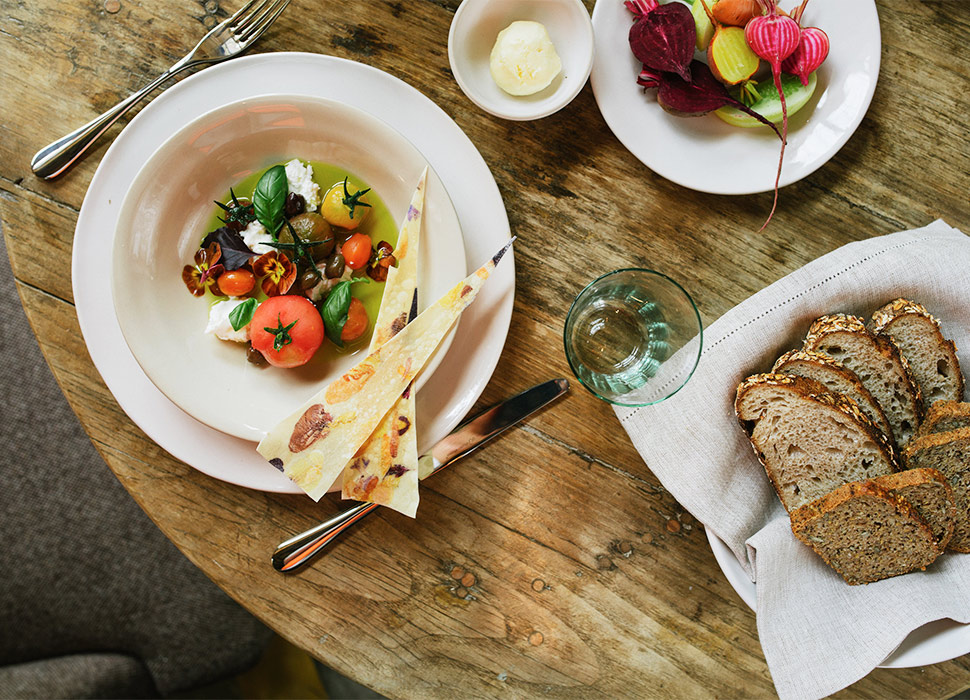 This extra-tranquil Hampshire hotel – housed in a modernised Georgian manor and slathered in serene Farrow & Ball-esque hues – boasts two fine restaurants, both symbolically presided over by ex-Petersham Nurseries and current Spring chef Skye Gyngell. If you like your dinner flame-licked and meaty, then head to the excellent Hearth. If you prefer something a bit more omnivorous, make for Marle: a pared-back spot that draws on both the estate’s biodynamic garden and the local salad specialist Fern Verrow for its delicate, seasonal modern Euro plates. 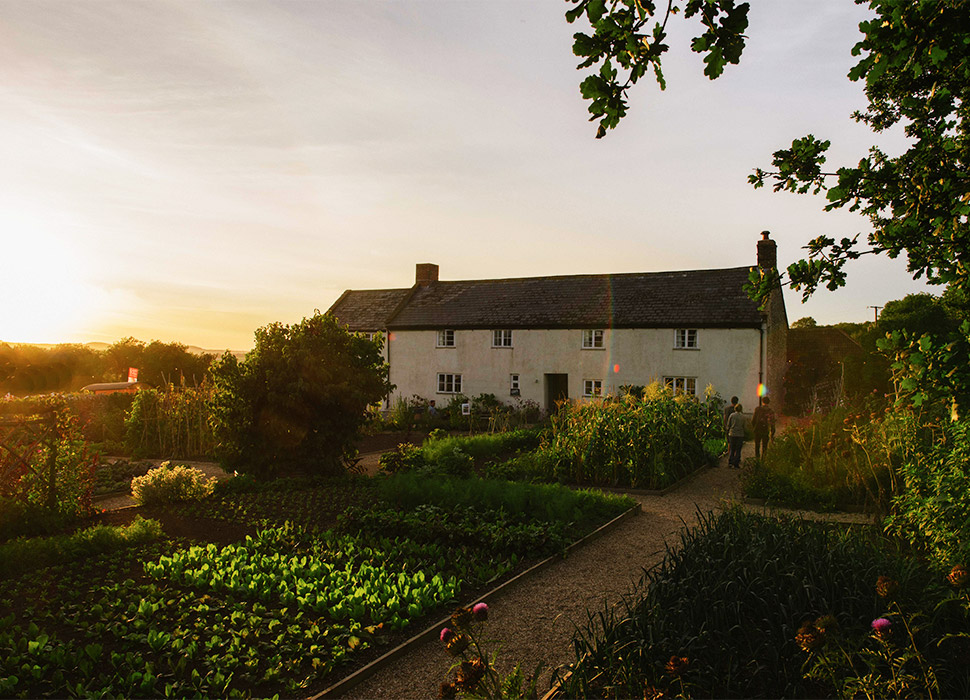 Since sacking off the rat race for his televised smallholding experiment back in the late '90s, Hugh Fearnley Whittingstall has become one of the UK’s most respected food-focused eco-warriors. River Cottage is now a full-bore lifestyle brand; a titular restaurant in the Devon town of Axminster its Michelin-gilded star-turn. Take a seat in the rusto-chic, girder-filled dining room and settle into a pared-back menu of lunchtime pies, sandwiches and soups, plus more elaborate, multi-course Saturday evening ‘feasts’ and Thursday night curries. Organic and plant-based fare is a focus, and much of the produce comes from the blisteringly bucolic River Cottage HQ farm/school just outside of town.

You probably know Riverford for its popular veg boxes, weekly fixtures on the doorstep of every aspirational London gaff. But betcha didn’t know about its dreamy countryside restaurant, hidden away in a soaring converted barn on their Devon farm. The setting couldn’t be lovelier – walls plastered with dried bouquets, a large suntrap terrace outside, chequered Devon hills beyond – and the veg-heavy food is outstanding. Service is, ahem, leisurely (they tell guests to allow 2.5 hours for their meal) – but it’s so lush here, you won’t mind one bit. 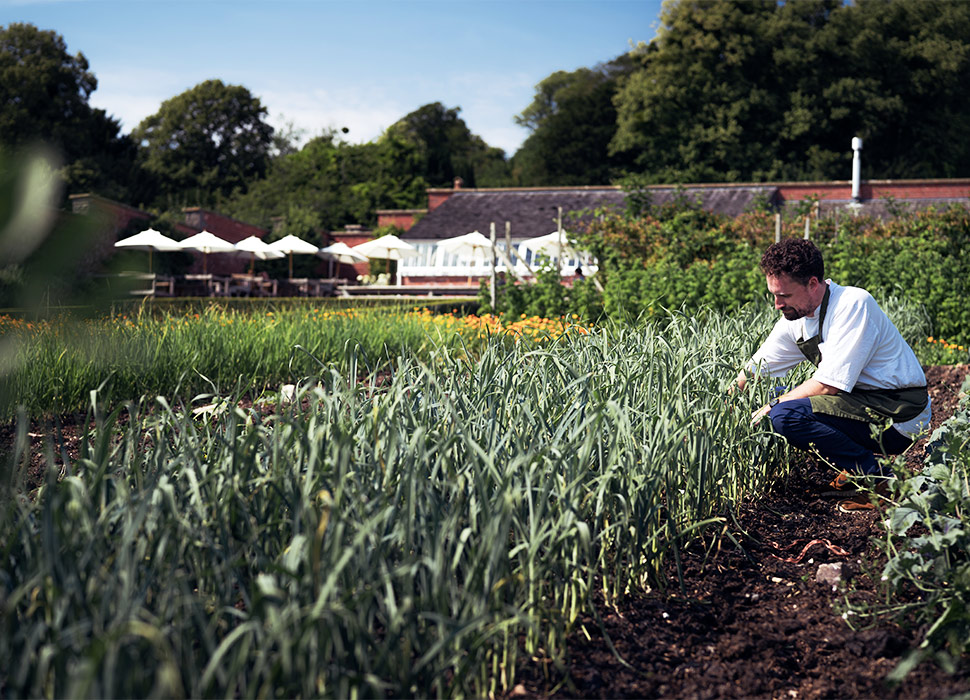 A chef surveys the crop at The Ethicurean / Image: Iain Pennington

Ignoring the punny name: this high-minded, highly decorated restaurant on the outskirts of Bristol is a virtuosic example of ‘good’ dining. The team here pursues sustainability in every sense: the soil in the on-site vegetable patch is protected by a ‘no dig’ edict, the staff are fairly compensated and the locally sourced fish are killed using a humane Japanese technique. Even those grumpy sods at Michelin were impressed – they awarded the restaurant a ‘green star’ for its worthy ethos. The food and the setting – an old orangery inside a walled garden – are equally stunning.

The Black Swan at Oldstead, York 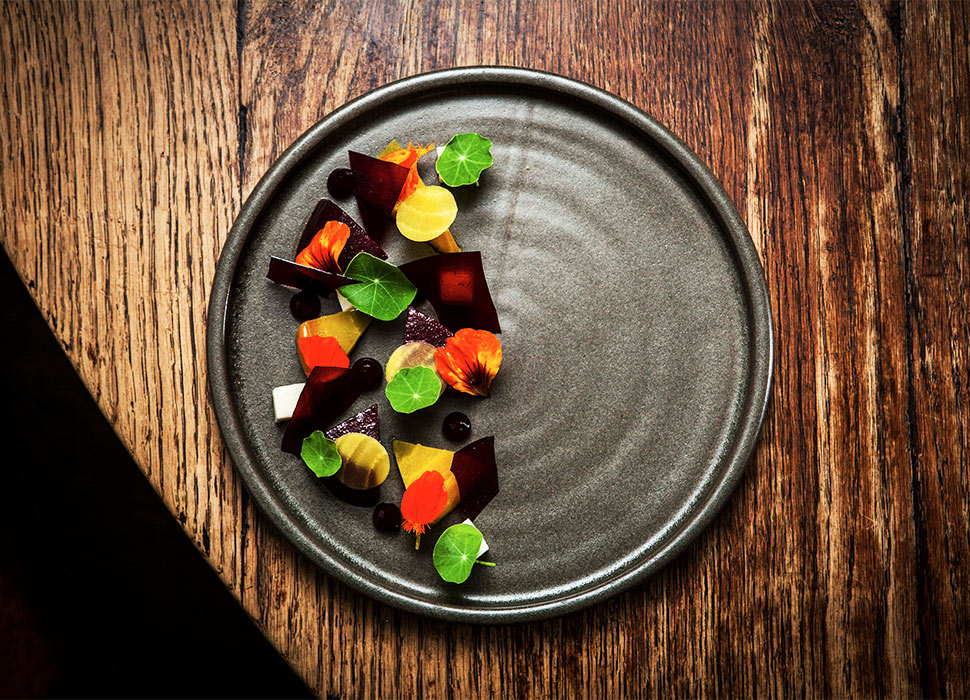 Down a mud-specked country lane that swerves through the stupidly idyllic North York Moors, The Black Swan at Oldstead is the sort of place bleary city-dwellers feverishly dream of. This Michelin-starred restaurant with rooms is run by Tommy Banks – who’s done the rounds on both Masterchef and Great British Menu – and his family, all Yorkshire natives and part-time farmers with a fondness for local crops. The dining room is cosy but cool – Persian rugs, Scandi furniture, flickering candles – and the food sublime. There’s a single tasting menu that changes based on whatever’s been picked or foraged, but you can expect unpretentious, sure-footed cooking with a delightfully wild streak. 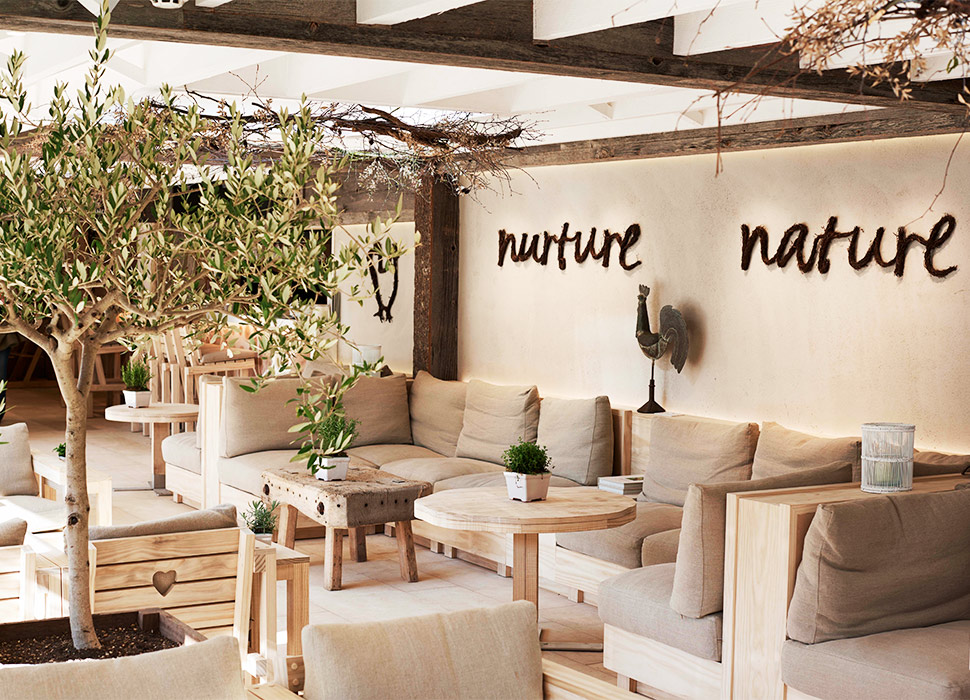 Sincere sloganeering at The Legbar at Daylesford

Daylesford Farm – set fortuitously over 2,000 acres in the Cotswolds – is quite the operation. Across its varied pastures you’ll find a market garden with over 300 varieties of growing veg, pedigree Aberdeen Angus cattle grazing to their heart’s content, five types of sheep frolicking freely, and a flock of Blue Legbar hens squatting out Easter-coloured eggs. Yep, it’s all a bit idyllic, and the best place to avail yourself of Daylesford’s top-shelf products is at the three on-site restaurants: the Old Spot for wood-fired pizza, the Legbar for drinks and snacks, and the Trough for veg-centred small plates and straight-from-the-source meat mains. 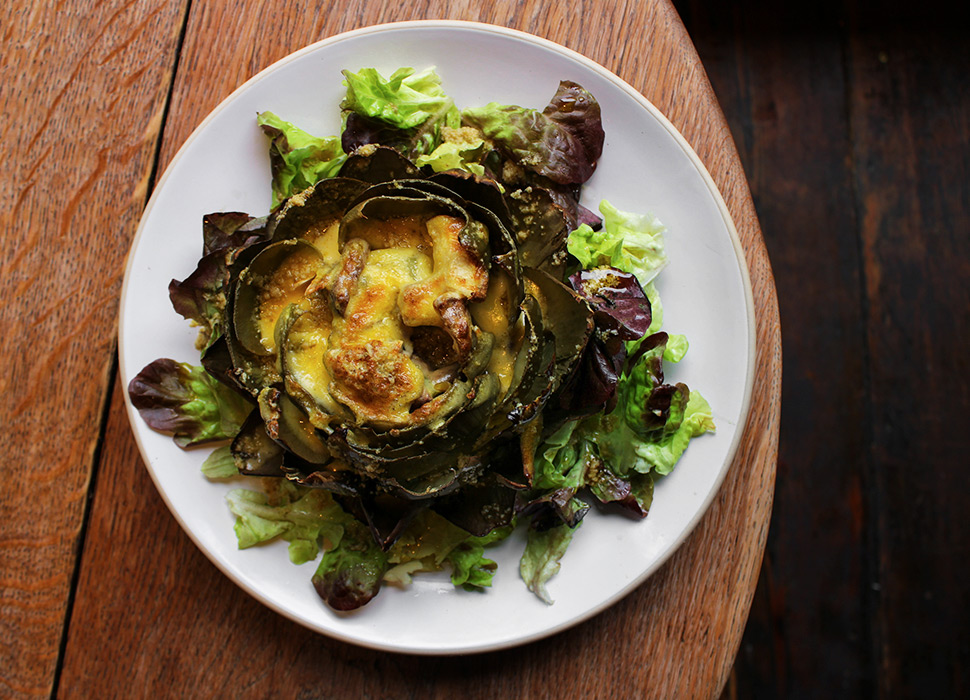 The grub at Rabbit's enough to make you 'choke up

In case any errant vegetarians start thinking the name is code for ‘rabbit food’, don’t be fooled: it’s mostly game, chops, and other red-blooded pursuits at the Gladwin brothers’ (also of The Shed in Notting Hill) popular Chelsea restaurant. But that’s not to say vegetables are snubbed completely: all the ground-grown stuff (and some of the animal fare, for that matter) comes from the Gladwin’s farm in West Sussex, hard by their family’s vineyard. Though most of the menu items can be intimidatingly macho (lamb sweetbreads dolloped with bacon jam; rabbit-flavoured bread), the zany, faux-taxidermy-heavy decor brings a bit of levity, and the staff are warm and helpful. 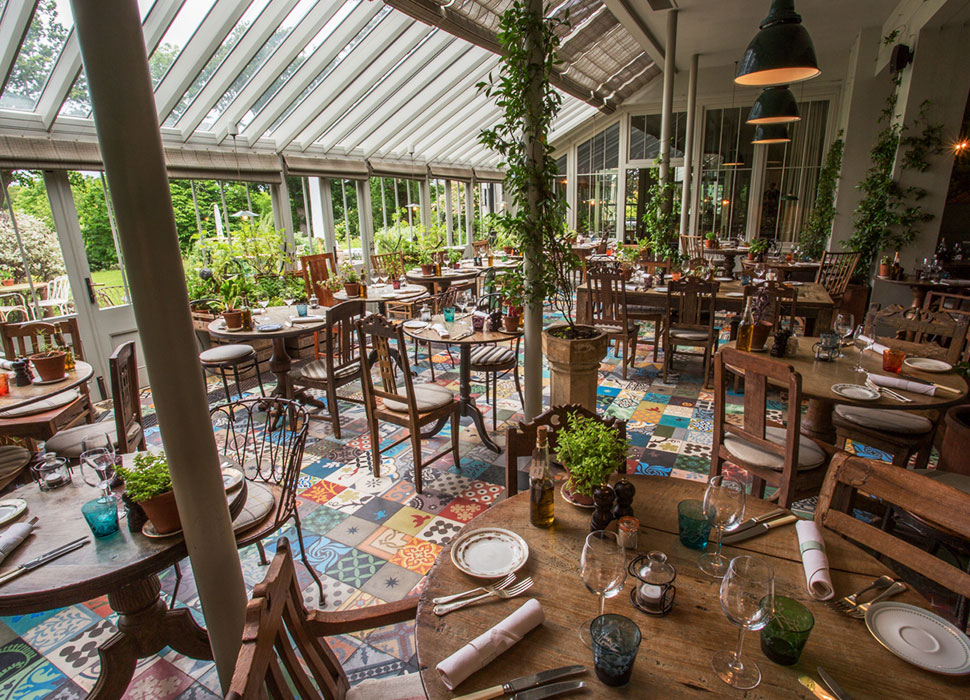 The Pig’s chain of hotels is worshipped by every lifestyle-y staycationer in the country, and its Hampshire outpost – more restaurant with rooms than classic bolthole – is the one that started it all. The conservatory dining room has a bit of magic about it, furnished with sturdy wooden furniture, a colourful mosaic floor, and climbing ivy. The food all comes from the surrounding New Forest, and the daily menu is dictated by whatever their on-staff forager happens to scrounge up that day. True to their name, things lean heavily on the porcine side (scratchings, chops, ham), but a long menu means vegetables get a good look in, too.