From Whitstable to Deal: How to spend a perfect day in Kent's coastal towns

Cool Margate, trad Broadstairs, idyllic Deal, medieval Sandwich: England's southeast coast is lined with pleasant towns. And luckily, most can be explored in a day – but you need to plan wisely. Here's how to make the most of 24 hours in these Kent coastal hubs

Inland, the 'Garden of England' attracts weekenders for its hilly, sylvan landscapes and manicured country estates. But Kent's cliff-lined coast is where it's really at – a stretch of land that teems with louche seaside intrigue, slowly gentrifying towns and some of the UK's most genial beaches. With so much to see, it's best to carefully plot your visit to this beguiling bit of the country – here's how to do it the proper way. 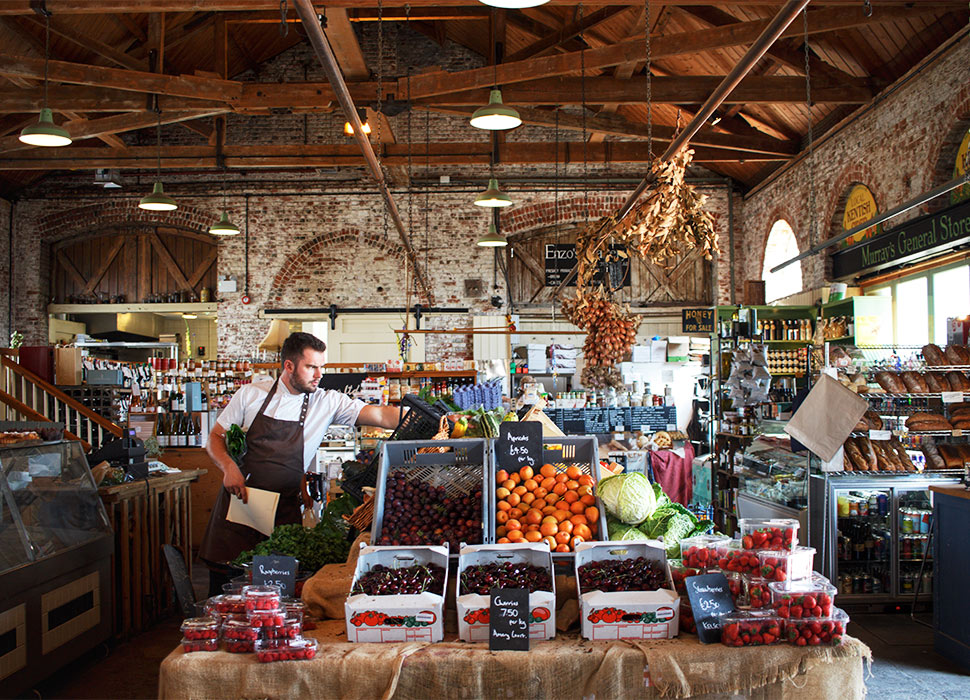 Fill your boots with top-shelf produce at the Goods Shed / Image: Sally Gurteen

Morning: Not-quite-coastal Canterbury still makes an excellent base for exploring Kent’s shoreline (Whitstable is a swift seven miles away), and its myriad historic sites and winding medieval alleyways mean it’s a worthy destination in its own right. Fuel up for a big day of exploring at the Goods Shed, a covered farmers market, food hall and restaurant hawking the best Kentish produce. Next up, it’s time to visit the big daddy: Canterbury Cathedral. Often touted as one of Europe’s finest heritage sites, this Gothic stunner rarely fails to impress. Don’t skip the fascinating, historically faithful herb gardens, a colourful replica of the various plots kept by medieval monks.

Afternoon: Cafe des Amis is a Canterbury stalwart – this colourful Mexican dive has been serving sizzling fajitas and frosty margaritas since the 80s. It's always makes a fun stopover, so lunch here, then head river-wards, where you can board a rowing boat on the Stour through Canterbury Historic River Tours, who will regale you with (some dark, some risible) anecdotes from the city’s centuries-long history. After a long drift downstream, take a late afternoon stroll along the dreamy riverside Westgate Gardens.

Evening: The Fordwich Arms – in Fordwich, officially Britain’s smallest town, just to the east of Canterbury – is one of the loveliest pubs in Kent, officially operating for an impressive 1,000 years and housed in a wisteria-covered Arts & Crafts building. The food is note-perfect – meticulous cooking that emphasises provenance and embraces all of Kent’s comestible blessings. 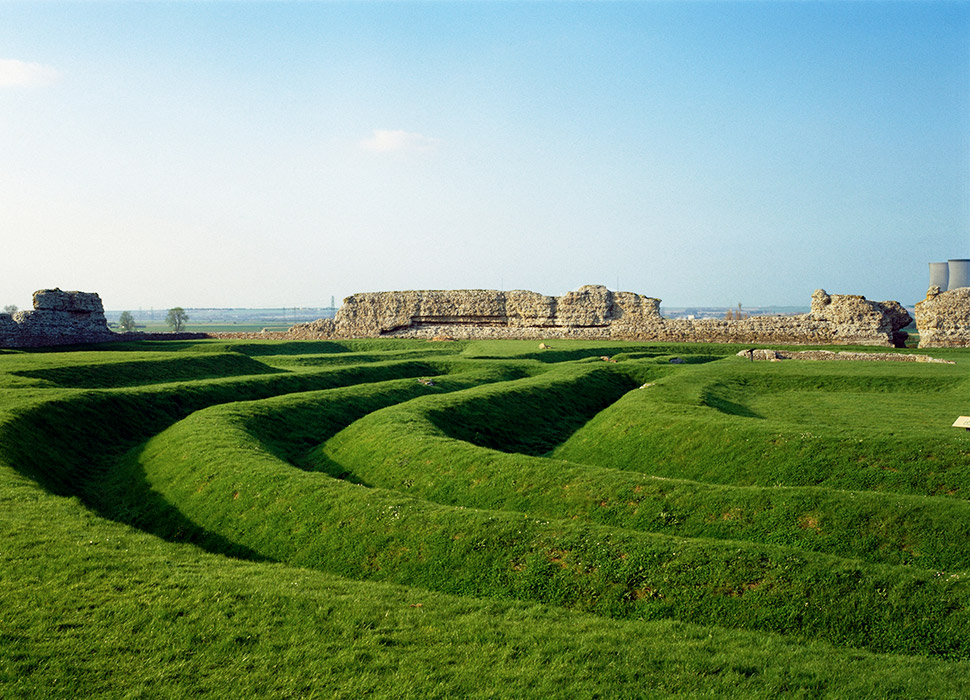 Go on a roam through Richborough Fort / Image: @English Heritage

Morning: Your first port of call should be the cottage-cute No Name Shop for French pastries and a fortifying brew. Take your breakfast to go and wander along the quay – once part of a mighty and militarised port, now a pretty little slice of the Stour dotted with happily bobbing boats. For something spectacular, hitch a ride on a River Runner boat to Shellness Point, where you’ll get the chance to spot the resident seal colony that flops along its pebbled shore.

Afternoon: After touching back on terra firma, break for lunch at the Bell Hotel, a grand Tudor pile that serves – what else? – slap-up sandwiches in its restaurant. Once you’ve tasted the local fare, time to hit the trail again – this time, it’s the Saxon Shore Way, which you can follow by foot along the Stour all the way to Richborough, a hulking Roman fort that was built after the invasion in 43 AD. Once you’ve explored the windswept site, swing back around to Sandwich, stopping at the Salutation stately home (now a hotel) to nose around the impressive gardens.

Evening: Dinner has to be Tan Bueno, a friendly little Mediterranean restaurant with a heavily vegan menu. Drinks? The Crispin Inn – built in 1491 – is the place to go for a taste of ye olde Sandwich. 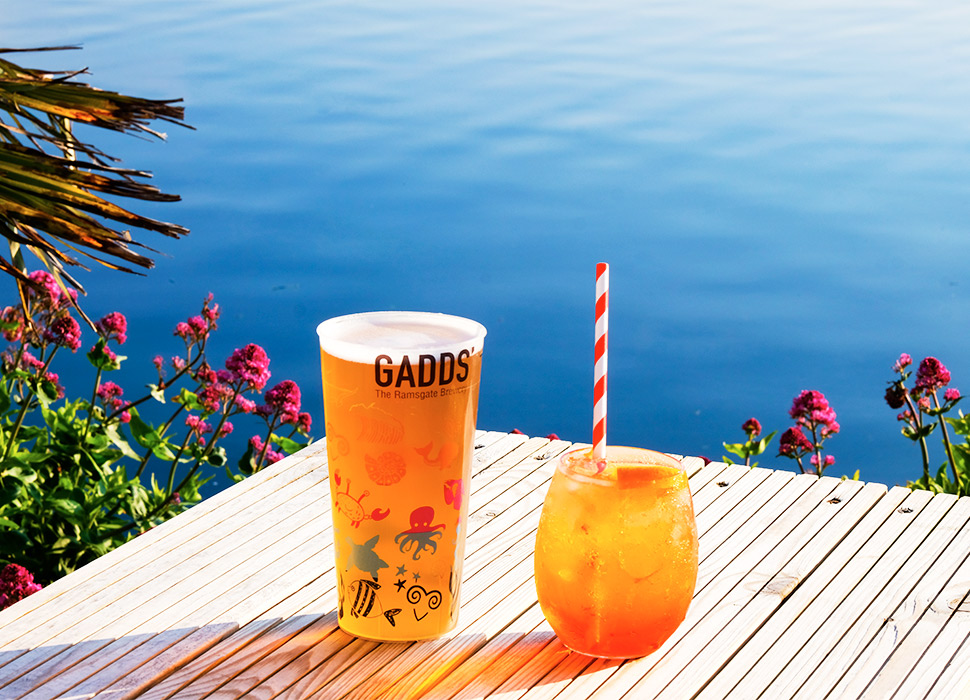 Sip a cold one at the Ravensgate Arms / Image: Eleanor Marriott

Morning: The artsy-chic Falstaff serves belly-busting breakfasts and pastries in its pretty back garden, so start the day there. Once you’re full, it’s time to explore Ramsgate’s most famous subterranean attraction – the town’s network of tunnels that sheltered 60,000 residents during World War II air raids.

Afternoon: Ramsgate may not have the hipster appeal of its Tracey Emin-championed neighbour Margate, but its vintage shops can easily rival it in terms of both selection and snap-up prices. Start your hunt at the sprawling Petticoat Lane Emporium – where 200 stall owners hawk their wares – and then move onto homeware treasure trove Arch 16 Antique Vintage and Retro Junk. Time for lunch: Flavours by Kumar is where you’re going, a much-lauded Indian serving fancied-up favourites from the subcontinent. Afterwards, walk off the curry on a ramble down to Viking Bay, and reward your valiant 2.5-mile effort with a bracing sea swim – or a pint at The Charles Dickens.

Evening: Ease into your final meal of the day with a pre-dinner drink at the Ravensgate Arms, then nab a table at the Albion House Hotel’s dining room for excellent surf and turf. Once the sun sets, the Royal Victoria Pavillion is usually heaving – this stunning former concert hall has the 'honour' of being the biggest Wetherspoons in the country, but its first-floor terrace offers the best vantage for admiring Ramsgate’s starry, pollution-free sky – though the unprepossessing Bedford Inn, with its open fire and flint-lined yard, is rather more charming. 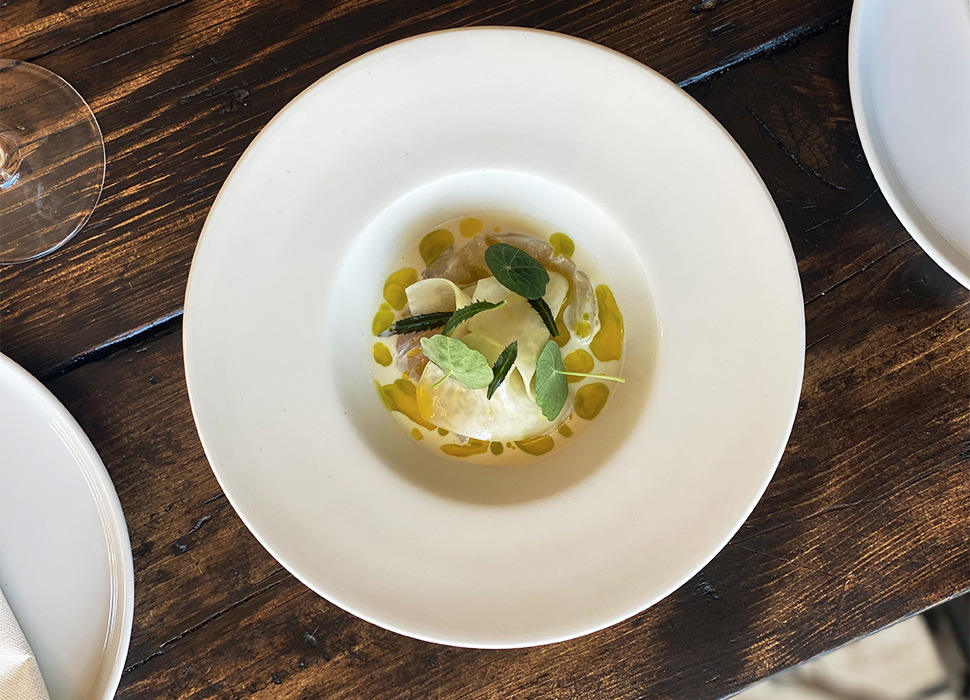 Morning: One pastry rules them all in this sleepy town: the sticky gyspy tart at the Old Bakehouse, a shortcrust-bundled treat that’s as welcome in the AM as it is with afternoon tea. Grab one on to go and make your way to the Dickens House Museum, an adorable little cottage-housed collection that chronicles the writer’s frequent trips to Broadstairs and all the local landmarks that inspired him – including the very house it sits in, which became the prototype for Betsey Trotwood’s home in David Copperfield. Just a few yards away, the imposing, clifftop Bleak House – currently closed, but still impressive from the outside – inspired CD’s novel of the same name, so round off your tour of Broadstairs here.

Afternoon: Beachside Flotsam & Jetsam serves perfect, greasy-fingers seafood and thick-cut chips from its counter. Take your paper cone-swaddled bounty to the sands and pick at it happily. The only appropriate post-lunch treat here is ice cream, of course, and the delightfully retro Morelli’s is the undisputed king. Time to burn off the cals: walk for three miles up to Botany Bay, and paddle in the placid Kentish waters.

Evening: You had a pretty full day, take it easy with a lingering dinner at The Table – the best restaurant in town, helmed by chef Joe Hill who serves whatever he fancies to cheek-by-jowl diners in the diminutive space. 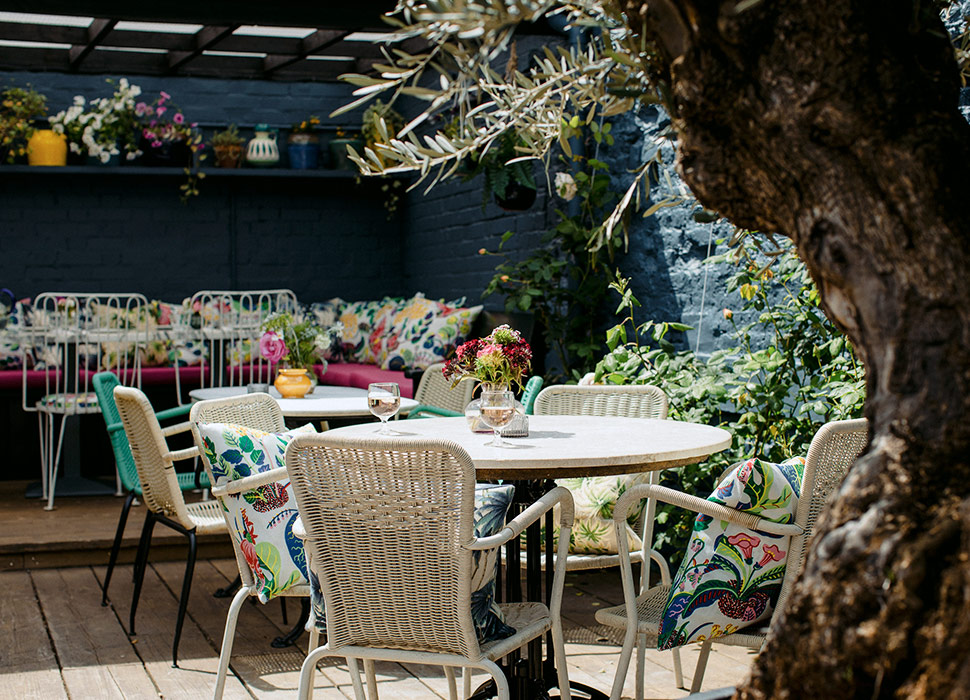 Find a secret garden-style terrace in back of The Rose / Image: Seth Carnill

Morning: Bang in the centre of the high street, the Scandi-minimal Popup Cafe has Deal’s best coffee and some decent breakfast bites. Eat up, then walk along the shore to the impressive Deal Castle, a 16th-century artillery fort that guarded against invasion by the Romans and the French. If one fortress is never enough, continue 1.5 miles to Walmer Castle, another old citadel with rambling grounds veiled in flower meadows.

Afternoon: Make your way back to town, where a mammoth portion of fish and chips await you at Middle Street Fish Bar. Take lunch on the seafront (with an optional post-repast dip), then head back into Deal’s warren of winding lanes for a little shopping. You’ll find a ridiculous number of cute shops along the high street, but be sure to make time for Hoxton Store, Will & Yates and Smugglers Records. Before the afternoon winds down, stop in for a quickie at miniscule micropub’The Just Reproach.

Evening: The Frog & Scot – run by a half-French, half-Scottish couple – is flawless: an unpretentious bistro serving French-inflected dishes that thrum with garlic and radiate care. If the well-pitched wine list doesn’t totally steamroll you, go for a night cap at the impeccably designed Rose Hotel, run by ex-Wallpaper* editor and excellent taste-maker Alex Bagner and her husband. 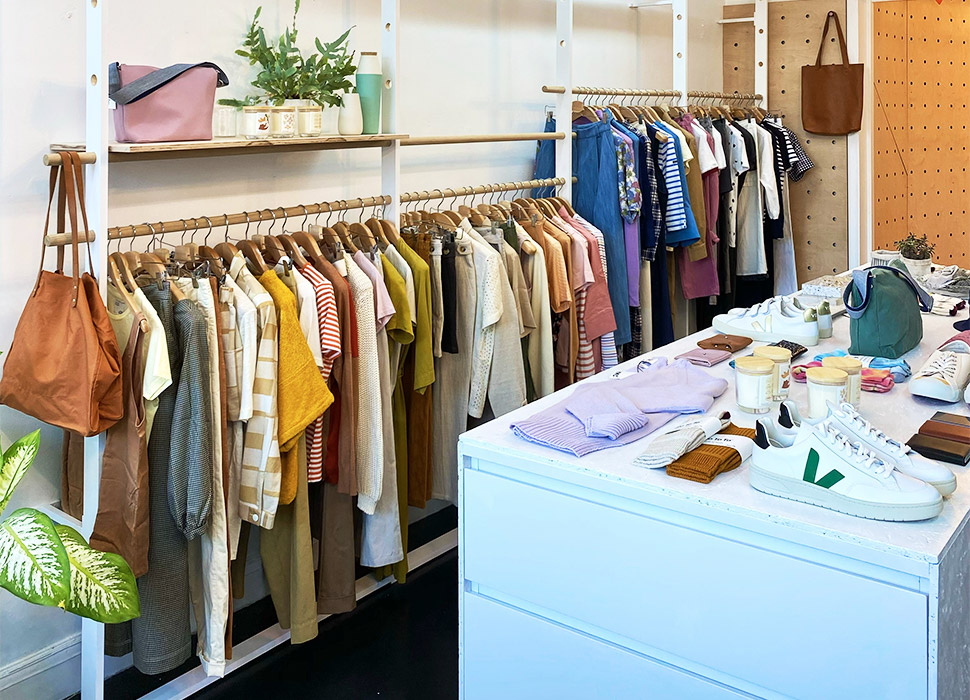 Ruskin's stock is worth a browse / Image: @ruskin_clothing

Morning: Set in a Tudor cottage, the almost criminally adorable Blueprint Coffee & Books is a half-bookshop, half-café hybrid serving delicious coffee and the most decadent brownies in town. Spend some time browsing the stacks before pulling up a window seat for a quick nosh. Once you’re done here, make a beeline for the tranquil Tankerton Beach for a morning swim and chill.

Afternoon: A leisurely morning calls for a leisurely lunch – you’ll find Jojo’s ten minutes down the promenade. It's a Greek-ish seafront restaurant serving flop-fresh seafood and whopper mezze plates furnished with fresh salads, cheese and cured meats. Take a seat on the terrace and take your time. Afterwards, meander along the coast to neighbouring Herne Bay, and the lovely She Rose gallery and shop, owned and run by artist Jo Oakley, who lives just above. Jo holds soy candle making workshops on her dreamy, tree-shaded back terrace – check her website to see when the next one is scheduled. Head back to Whitstable before closing time for a little nose around shop-lined Harbour Street, particularly for contemporary-cool clothes from Ruskin and rare records at Gatefield Sounds.

Evening: From the outside, the roadside Sportsman pub doesn’t look like much – but its shabby exterior betrays the quiet genius going on inside. Said by many to be the UK’s best gastropub, this Michelin-starrer serves ludicrously delicious micro-seasonal plates made from ingredients plucked from the Kent coast. It’s marvellous, and – with a tasting menu that clocks in at £65 – marvellously well-priced. 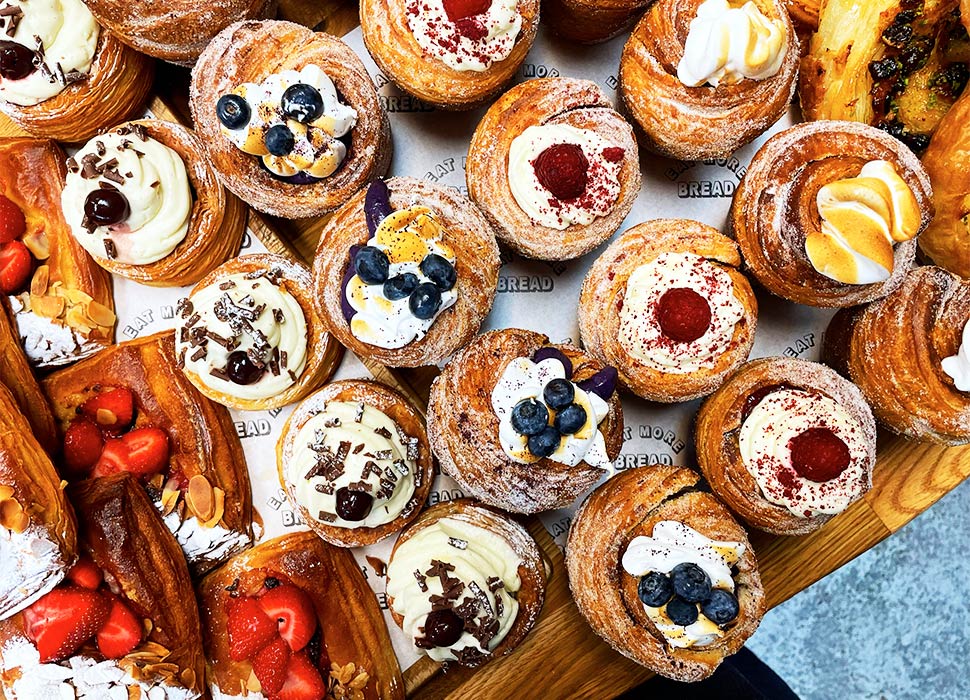 A cornucopia of pastry at Modern Provider

Morning: Too-cool Margate is home to a wealth of delicious places to eat, so start your food opus at Modern Provider, a bakery run by former accessories designer Ben Wykes. His loaves are divine, so bag one for later and grab an oven-fresh pastry to eat there and then. Next, it’s time for a swim, and Walpole Bay is the best place to do it. Walk along the Viking Coastal Trail until you find it – honey-sanded and serene – and paddle around in the four-acre tidal pool that traps the tranquil sea water. Before heading back into town for lunch, have a peek at the very cool Shell Grotto – a subterranean passageway decorated with a kaleidoscope of seashell mosaics – and the nearby Margate Caves, originally dug as a chalk quarry in the 17th century and daubed with animal murals.

Afternoon: We said Margate is a good eating town, and we mean it: even its local chippy has the best fried fish in Kent. Head to Peter’s Fish Factory for flaky, golden cod and sea-salty chips. Next up, trek up to cute, residential Cliftonville and dip into Scott’s Furniture Mart, a multi-level mecca of homeware oddities and furniture bargains. After that, it’s back to the Old Town for insanely good handmade ice cream served from a counter at the back of antiques shop Ramsay & Williams, then pre-dinner cocktails at Little Swift, a friendly bar overlooking the main sands.

Which Cornwall town should I visit?