Where the wildlings are: prehistoric survival skills with Will Lord

The English region of East Anglia is home to ‘wildman’ Will Lord, an expert in ancient survival skills, and his eager students. He gives us a gory taste of the prehistoric good life

Grime’s Graves is an age-old flint mine just over an hour’s drive from Stansted Airport. I’m here on a hunt – a manhunt.

“Are you looking for the Wild Man of Norfolk?” asks the smart-looking site custodian. “You can’t miss him – he’s just over that hill.”

I trek gingerly through a clearing in the overgrown heather and bracken, and there, in the middle of the cratered expanse, is Will Lord, the UK’s most famous living caveman. He’s dressed from head to booties in full fur get-up, with the pelts of several creatures – and their teeth – on leather straps draped across him. He’s also sporting a terrifying shamanic mask. I realise it’s too late to run away. 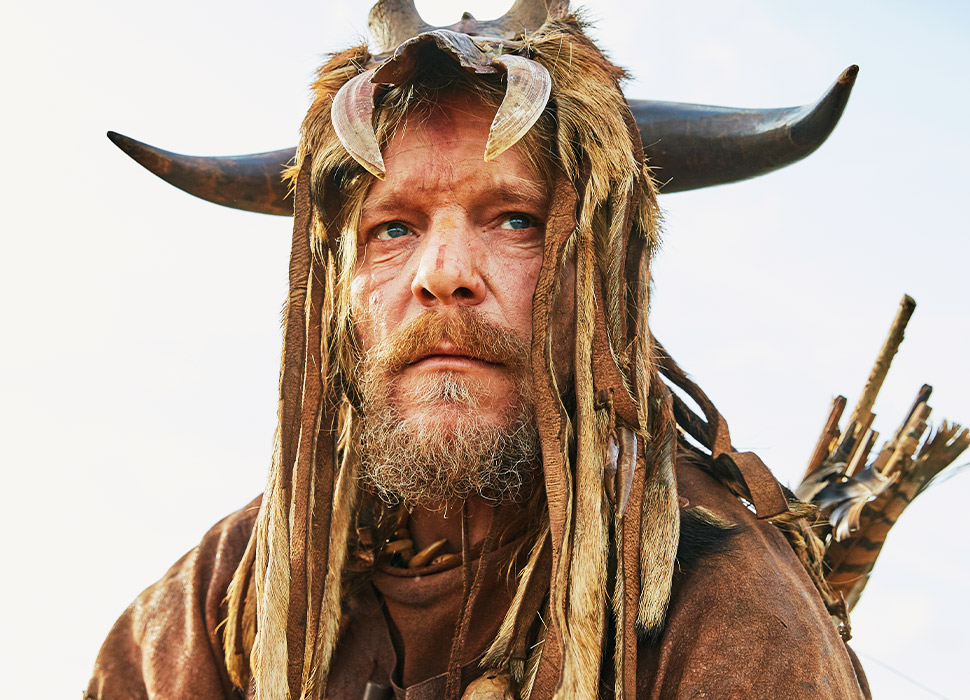 I’ve come here to learn about the ancient survival skills of our prehistoric ancestors in case global disaster strikes, but right now, the apocalypse is looking more appealing than having my molars end up as a caveman fashion accessory.

“Hello!” he greets me warmly, striding out of the brush. “Fancy a cup of coffee?”

This is Will, who does civilised things, like make coffee. But Will has an alter ego called Wood, who is fascinated with flesh and bone. Wood is who Will channels when teaching guests about life in 2000 BC, which he’s been doing on this historic land near the town of Thetford for the past 15 years. As we sit down with our drinks, I’m thankful it’s Will answering my questions.

“I’m an experimental archaeologist practitioner,” he tells me.

“I prefer the term thrivealist,” he says. “A survivalist means you’re trying to get back to where you were before, while a thrivealist is much happier staying and living on their own in nature.”

Forty-eight-year-old Will’s wild way of life is definitely thriving. Several times each week, Will – sorry, Wood – and his cavewoman partner Susan (just Susan) give classes of children the coolest experiential history lessons ever, such as learning how man first made fire. For the adults, he offers popular four-day residential Stone Age adventures with flint knapping, bronze casting and longbow-making courses. 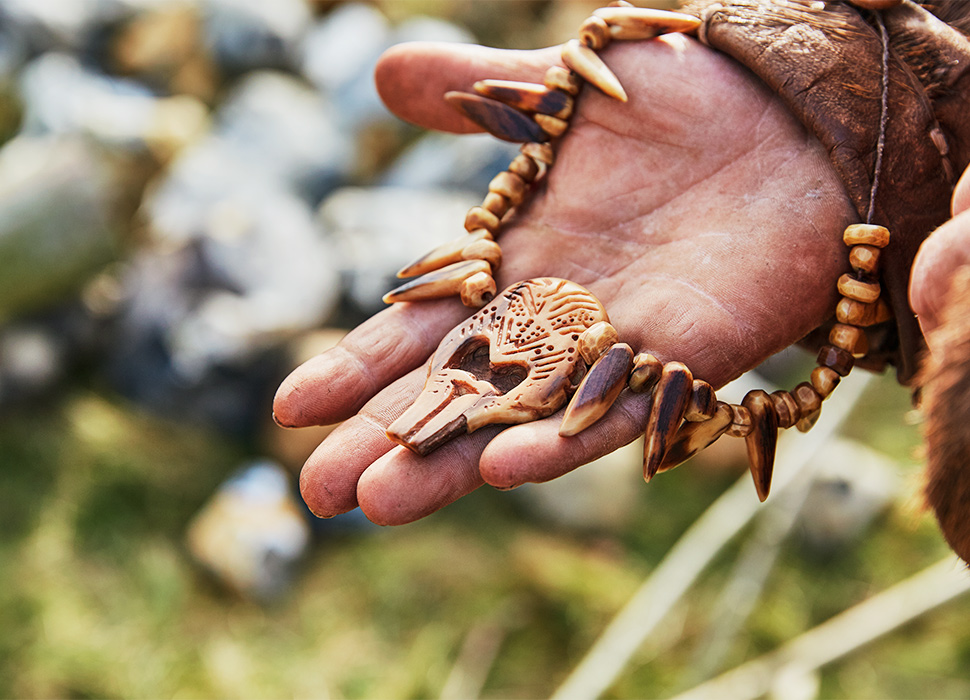 Thanks to the revival of movements including the meat-heavy paleo diet and the boom in bestselling self-help books encouraging a return to living according to hunter-gatherer principals, the public are once again looking back over past millennia for lifestyle tips, with the bonus that pastimes like foraging and wild camping are free. It’s meant Will’s childhood obsession (his parents were previously the custodians of Grime’s Graves), now his vocation, has unwittingly tapped into a very modern trend.

“A thrivealist is happiest staying and living on their own in nature.”

“I think people want to try out a different way of thinking and living,” says Will of his new cave-people converts. “We all have this remarkable set of natural skills within the code of our DNA that’s just been forgotten over time. Back in the Stone Age, they knew everything about how to be self-sufficient in nature. I think people are visiting me to gain these practical skills and a sense of happy, confident solitude again.” 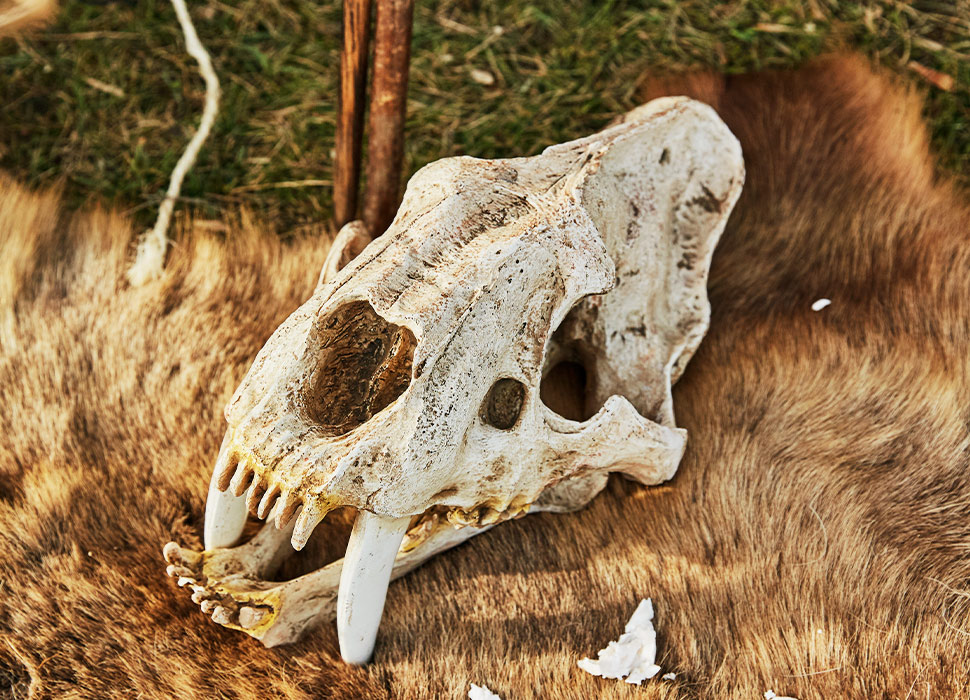 Now it’s my turn to find out if I could survive in times past – 10 million years previously, to be exact – by climbing into one of the UK’s oldest prehistoric flint mines, where the cave people would have spent their days working.

“Each step you’re taking down the ladder is about 10,000 years through history,” Will shouts down at me through the opening to the bunker door, as I descend into the cold, dark abyss.

Will and I then crawl through slightly panic-inducing smaller chalk-cave openings on our hands and knees, where ancient men and women carved out material for their tools and weapons.

“Argghhh!” I scream. “A bat!” One solitary mouse-with-wings navigates the tunnel, having come out of an eerie chamber containing a pile of broken flint bedrock and what looks like bones next to it. Is this what’s left of the last people who ventured down here? Will laughs. 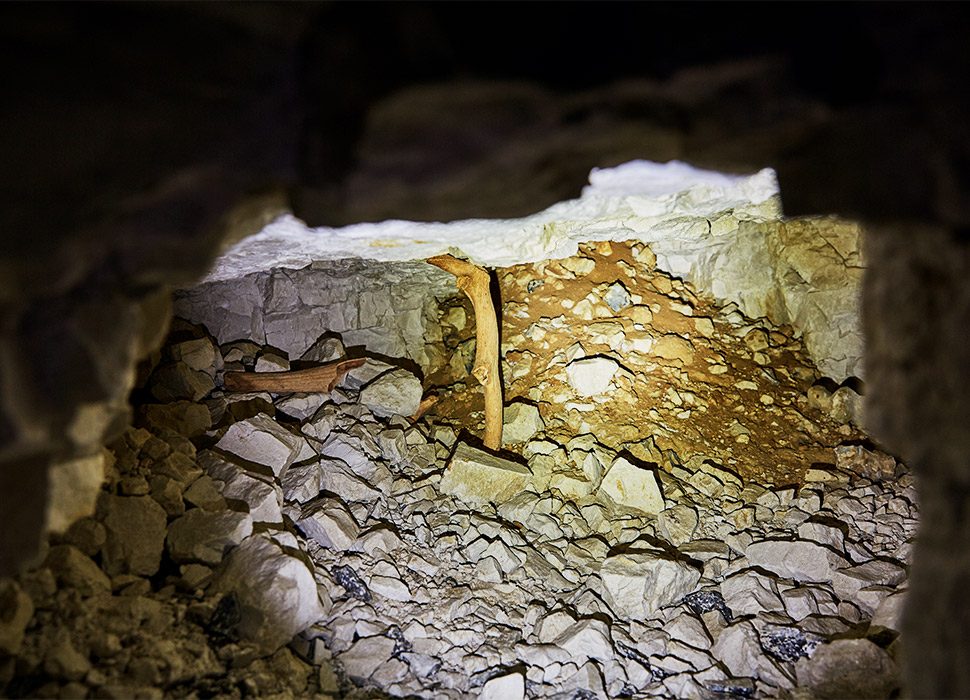 “No, these are the deer antlers that prehistoric men fashioned into picks for mining. They’ve lain untouched for thousands of years.

“I can definitely feel spirits in the pits,” he adds. “I often apologise to the pit for disturbing it. It’s like stepping into a puddle – the energy ripples outwards. Shall we turn off our torches and sit in the dark to absorb the ancient energy?”

Absolutely not. Spirits or no, I am spooked and shoot back up the ladder, happy to be back in the bright sunlight of the 21st century.  “You’ve just time travelled!” Will says, as he re-emerges behind me. “How great is that?” 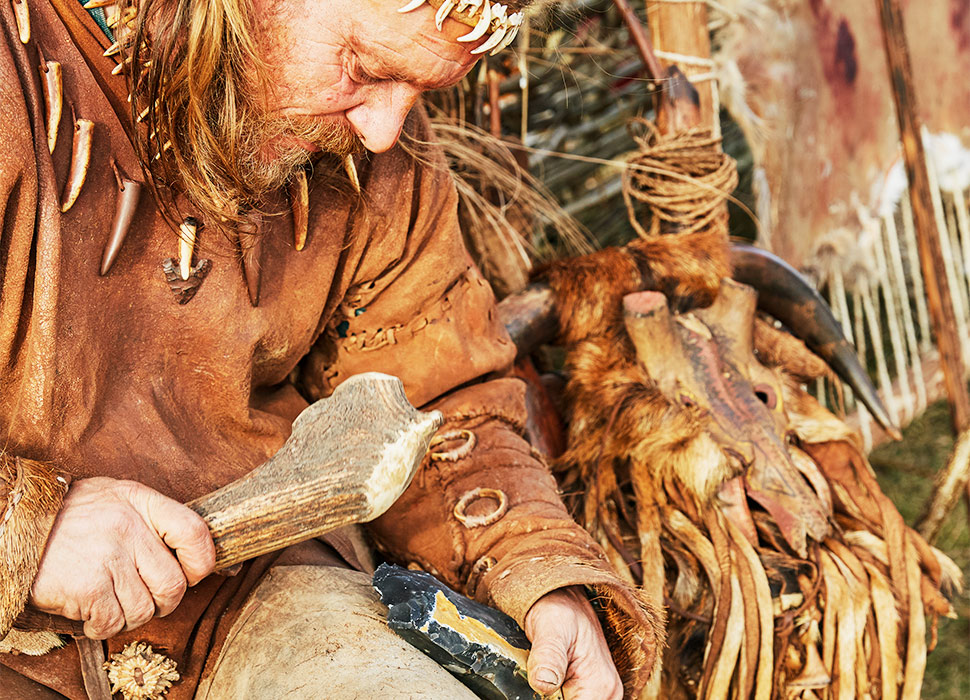 Will’s comfortable living in the past, because he’s done it all his life. As a child, with no TV for entertainment, he immersed himself in the history of the land around him. He still doesn’t own a TV, which means he’s not only missed out on the retro romp that is Game of Thrones, but has also never seen the many programmes and films he has consulted on for historical accuracy.

It’s getting chillier out on the wild expanse, so we begin the next caveman task: making fire – a vital skill for anyone preparing for the collapse of civilisation. Will says that – alongside the outdoorsy sorts and bushcraft enthusiasts – quite a few ‘preppers’ attend his courses, believing his skills will help them get ready for the end of the world. Maybe it can’t hurt to join them.

He starts by showing me the Neolithic trick of hitting a marcasite stone with a flint from the mine. We’re trying to catch a spark on something called amadou – or mushroom ‘leather’ – from a giant fungus. In a sharp downward motion, I hit the two stones together. Nothing. I hit again. Still nothing. I’m getting pretty hungry and if I don’t make fire, there’s going to be no dinner. Ancient man didn’t have Uber Eats. 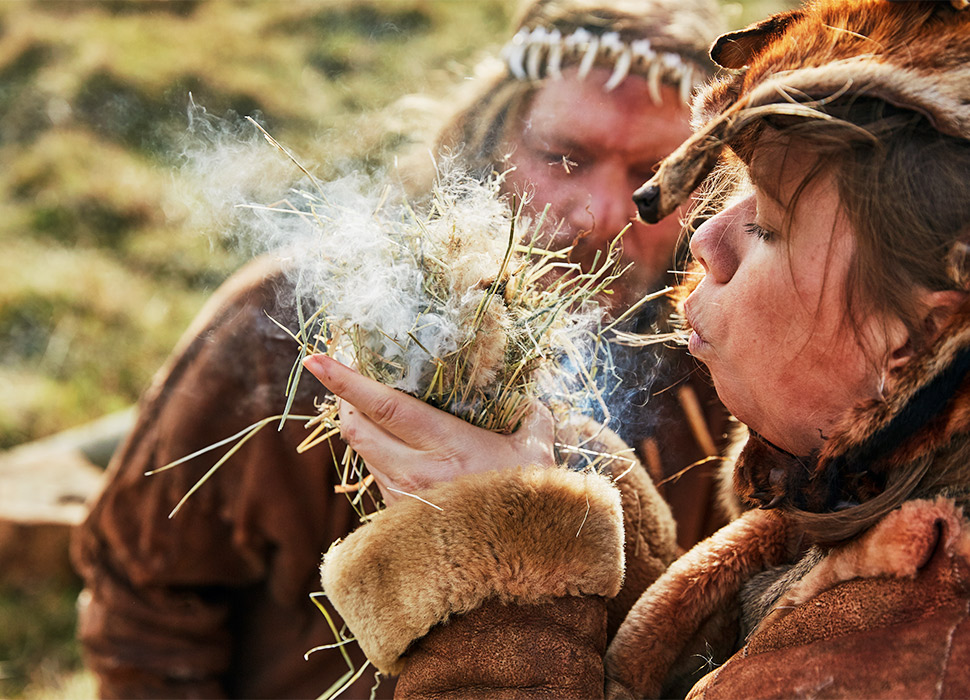 Our writer gets a spark of inspiration

The late winter sun is beginning to get low in the sky, but its light means that it’s almost impossible to see if there are any sparks flying yet.

And then… a few glowing crumbs of ember start to quickly eat away at the amadou. “That’s it!” says Will. “Now, place these fluffs of bullrush around the mushroom with some hay.” I cup the bundle tightly between my two hands to nurture it and start to blow. Plumes of smoke suddenly burst out. I blow again – this time a lick of a flame! 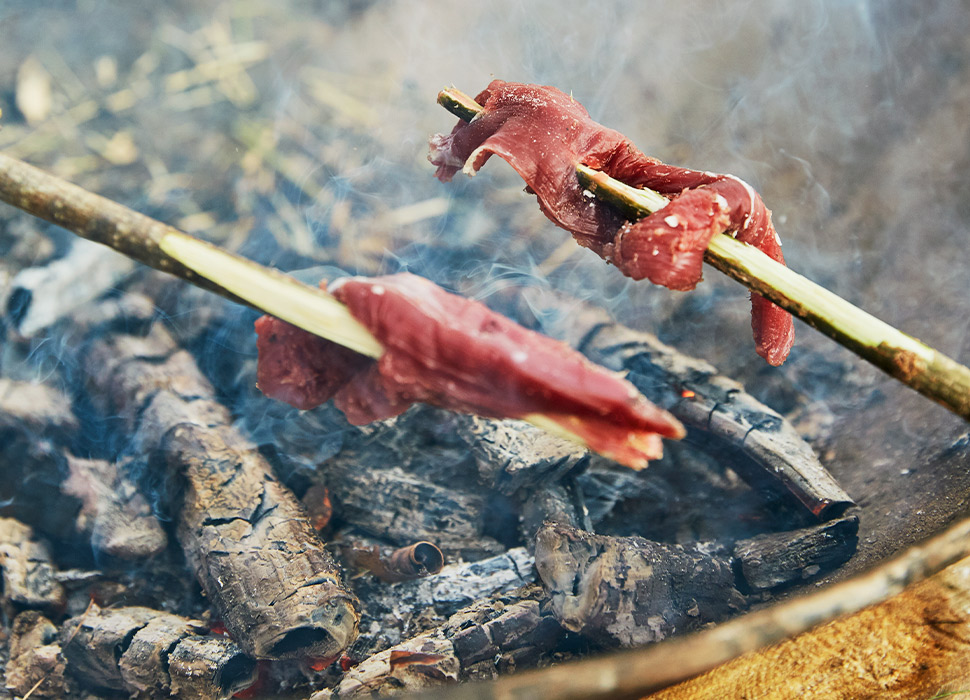 Venison cut with a knapped flint roasts over an open fire

I drop the burning wad into a metal pan and soon we’ve got ourselves a roaring campfire, ready to cook the raw, bloody, but now strangely appetising venison Will’s sourced for dinner.

“Some people get emotional when they make fire for the first time – it ignites a primal spark,” says Will. Obviously, some of us are meant to dwell in dank caves and others are destined to be firestarters. I’ve found my calling.

I’ve enjoyed wildling life, but I’m excited to get back to 2019, where Tinder isn’t something you light and ghosting doesn’t happen in caves. I know I’ll be taking something with me, however. Watch out if you’re coming around to mine for a BBQ this summer. I’ll be the ancient warrioress tending the grill.

"Travel has been therapy for me": an interview with adventurer Simon Reeve