10 of the best fish and chip shops in London

London experiences don't come more authentic than woolfing down a warming portion of fish and chips, vinegar steaming into your eyes as you go. Here are 10 of your best options

Some clichés persist for darn good reason. And the great British chippy is absolutely one of them. If you’re visiting London it would be downright mad of you not to sample the national cuisine. That being golden battered fish – or its vegan equivalent – served with substantial, hand-cut chips, all fried in molten oil. Here’s a selection of the best fish and chip shops all around London – whether you plump for humble ketchup, posh tartare or even a cheeky gherkin is entirely up to you.

Stuffed on beige carbs but ready for round two? These are the most exciting new restaurant openings in London.

And, hell, these are the actual best restaurants in London proper. Consider it a checklist. 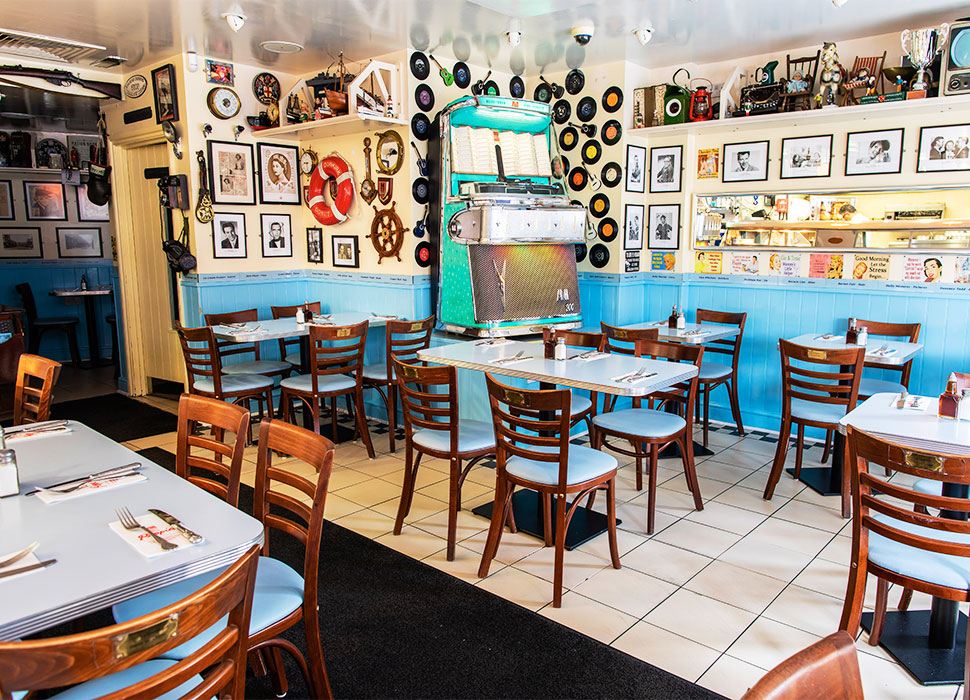 Now a thriving chain with outlets in Soho and Camden, the OG branch of Poppies sits on a plum East End corner. The American diner vibe is maybe a shade incongruous, but never mind that – there are vanishing few places in this town that still serve jellied eels, let alone as a starter. Friendly and fun with popping crispy batter, Poppies’ reputation is such that John Legend and Chrissy Teigen were recently spotted chowing down in a booth. You could be next.

The undisputed king of chippies around Hackney’s chi-chi Victoria Park Village, Fish House is tailor-made for picking up an agreeably greasy bag of goodness for an impromptu picnic on the grass. But it’s also a date-night-fancy, sit-down restaurant, its pretty tiled space doling out the likes of fresh Colchester oysters, fish tacos with house slaw, and even vegan ‘fish' and chips. Full marks for sustainability here. 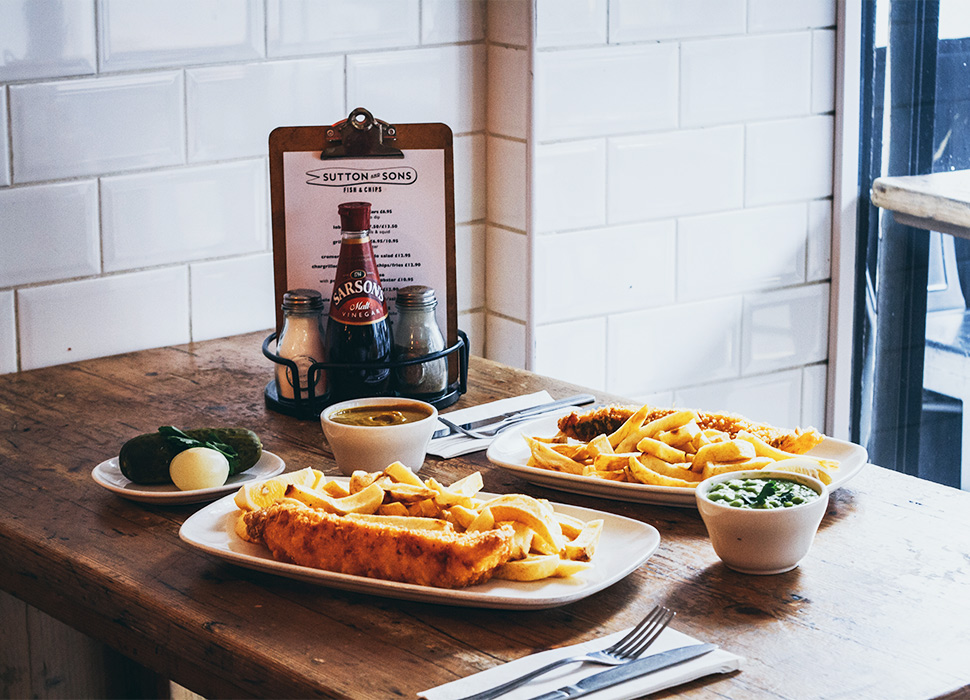 They had us at the branding – just look at that logo, emblazoned on a retro wooden chip fork. You know what you’re getting here. Tracing its roots back to Stoke Newington fishmonger Danny Sutton, who started frying up his catch of the day in 1998, this sprawling chippy empire now has outlets in Hackney and this, an upscale spot on Islington's Essex Road. In addition to the standard fare, get a load of specials running the gamut from chargrilled sea bass to grilled oysters, or a lavish lobster sub.

Don’t be put off by the diner-style glossy tiles and neon signage. This gleaming restaurant on Soho’s Poland Street is the real McCoy, with great hunks of flaky cod – carefully sourced and traceable back to the boat that caught it – rubbing fins with plant-based vegan cutlets and secret-recipe tartare sauce. If you’ve ever wondered about saveloys, those rather obscene, long red sausage things, this is a perfect place to give them a whirl. Thank us later. 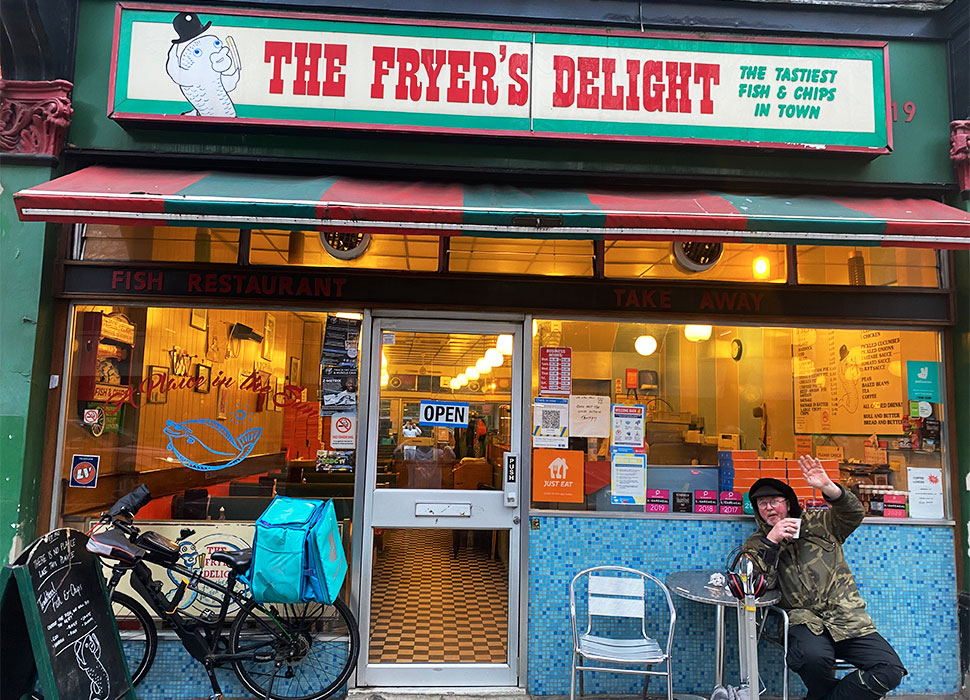 No frills heaven at this Holborn stalwart

This Holborn institution is beloved of cabbies and other colourful cockney characters. As such, don’t expect too much in the way of frills, fancy condiments or sustainable goody-two-shoes touches. What’s that taste? Beef dripping, which infuses the chunky old-school chips and irresistibly crunchy batter. It’s an authentic spot, is what we’re saying, from the tatty 1960s furniture to the astounding signage and grizzled staff. Absolutely banging cod, too.

A proper London chip shop, Toff’s has been satiating the peckish denizens of leafy Muswell Hill for decades under the able stewardship of the Georgiou family. Freshly spruced inside, Toff’s nevertheless keeps the menu largely traditional, with groundnut-fried chips and big hearty chunks of fish. Not that they’re averse to a bit of experimentation – if you're dining in, plump for the home-made semifreddo, a kind of Italian ice cream cake. Bellissimo.

Michelin-starred culinary bigwig Tom Kerridge has set up a high-end, high-priced chip shop in iconic Knightsbridge department store Harrods. What do you get for your eye-watering £35 outlay? Well, there's the triple-cooked chips – that apparently take two days to make – shimmering with savoury flakes of sea salt. And flaky, ethically-caught and handpicked fish served in Kerridge’s signature light, gluten-free batter. There’s plenty of fun stuff beyond that – think deep-fried cockle popcorn, native lobster Thermidor, or caviar and crème fraiche as a side. Served in newspaper it ain’t.

This easy-on-the-eye Balham spot pulls off the nifty balancing act of being really quite old-school in its flavoursome fried headliners, yet also rocking a contemporary hipster ambience. What does that mean? It looks fab, with gleaming alabaster tiles, distressed wood benches and pendulous Edison lightbulbs. And it tastes authentic – anybody who grew up in London will enjoy a Proustian rush at the herby fishcake aroma inside. And it’s licensed, so you can have a nice beer while you’re reminiscing.

Gleaming seafood and burnished chips at a Marylebone classic

There’s been a chippy of some description on this spot since the First World War. Assorted changes of management and an ugly fire in 2009 could’ve sunk the operation, but generations of devoted fried food stans have kept it going. Today it’s a faintly upmarket restaurant with a swooping central Art Deco bar and lots of moody subaquatic sculptures. It’s unashamedly trad, with subtle notes of modernity creeping into the pinky-breadcrumbed batter. Pricey, but worth shelling out.

For a warm welcome and frankly ludicrous portions this discreet Brixton hideaway is hard to top. Classic staples – your haddocks, your sausages in batter – rub crispy shoulders with spicy neighbourhood faves like masala fish and southern fried chicken. The seating bit out back is cosy enough for a semi-fancy dinner, and the chatty staff are full of local goss and strong views about the football. For a taste of real London, this is the plaice.