Winningly retro interiors at Upstairs at The George

Review: Upstairs at The George, Fitzrovia

FEELING ABSOLUTELY STINKING RAVENOUS? THEN JOIN US AS WE CHOMP OUR WAY THROUGH LONDON'S HOTTEST NEW RESTAURANTS, ONE GLORIOUS OPENING AT A TIME. THIS WEEK, A trad-luxe gem of a dining room at a refurbed boozer in central

Winningly retro interiors at Upstairs at The George

Seen the below but got Chelsea on the mind? Try our review of 1771, a low-key, low-lit neighbourhood joint from a megawatt chef.

Want to fill put that go-to list? We've got plenty of gems on our best restaurants in London guide. 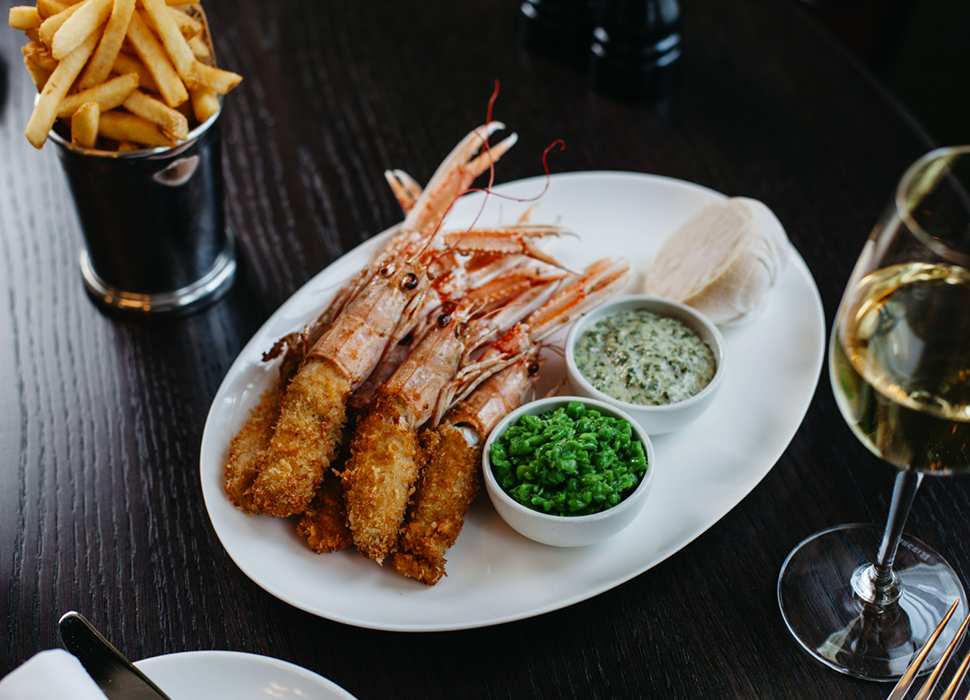 The George, then. Downstairs: an attractive boozer in the classic sense, all storied panelling, cask ales and thrumming post work brouhaha. It is heaving on a Thursday evening (the spring downpours having briefly paused), credit less to the fact that’s now run by London’s finest hospitality group, JKS, and more to the fact that Brits are inveterate midweek boozehounds and this is now one of the nicer pubs in central London, a zone oddly bereft of ‘em (this west Fitzrovian stretch, in any case).

But scootch around the left of the bar and up a tight stairwell, and the throng disperses. Upstairs at The George is a different beast entirely: a gorgeous, 28-cover bolthole of a dining room, with a Lilliputian English wine bar attached, doing upscale (but, for the most, quite gloriously unreconstructed) British pub grub.

The room is a blinder: over-styled, near-camp, utterly resplendent. This is a sister pub to The Cadogan Arms in Chelsea, the maximalist aesthetic of which seems almost dowdy compared to the retro-luxe Georgian splendour here. As there, Kitchen Table’s James Knappett is responsible for the menu. And again, it’s a triumph. Fury-making in that I want – but am restricted by decorum and capacity – to order literally everything on it.

Lo. There are devilled eggs, of course – 2022’s ubiquitous titbit, here further burnished with espelette pepper. Flor sourdough (a tad too malty, personally, but I remain in the minority with such noxious opinions). A ‘seafood bar’ subsection of whelks with curried mayo, dressed crab, prawns with marie rose, and so on. Superlative steak tartare with smoked egg yolk; devilled veal kidneys on toast, heartbreakingly sold out on our visit; an unprepossessing soup of the day. Oof.

The mains are even more unashamed: bangers and mash, a lamb hotpot (which needed a crisper scalloping of potato, but still), scampi and chips made genius with eldritch whole langoustine (the bare tails of which are breaded and fried) and, in an unprecedented concession to the ‘70s, a steak tournedos rossini, of which more shortly. See? Impossible.

They've been canny with the drinks, too. The wine list is sprawling, its English selection gargantuan and intriguing – some sparkling numbers from which aren’t served anywhere else in the UK – and both the pre- and post-prandial cocktails are inventive and meticulous (I’d happily drown in both the spritzy, Alpine-bitter-laced ‘Oopsie Daisy’ or the wicked 50/50 sazerac that washed down some decent soft-serve for pudding).

It seems a trite cliché to say that JKS, given the group’s laughable consistency, has done it again. But such is the case. Upstairs at The George is the trad-luxe pub-grub revivalist you never knew you needed. Ascend. 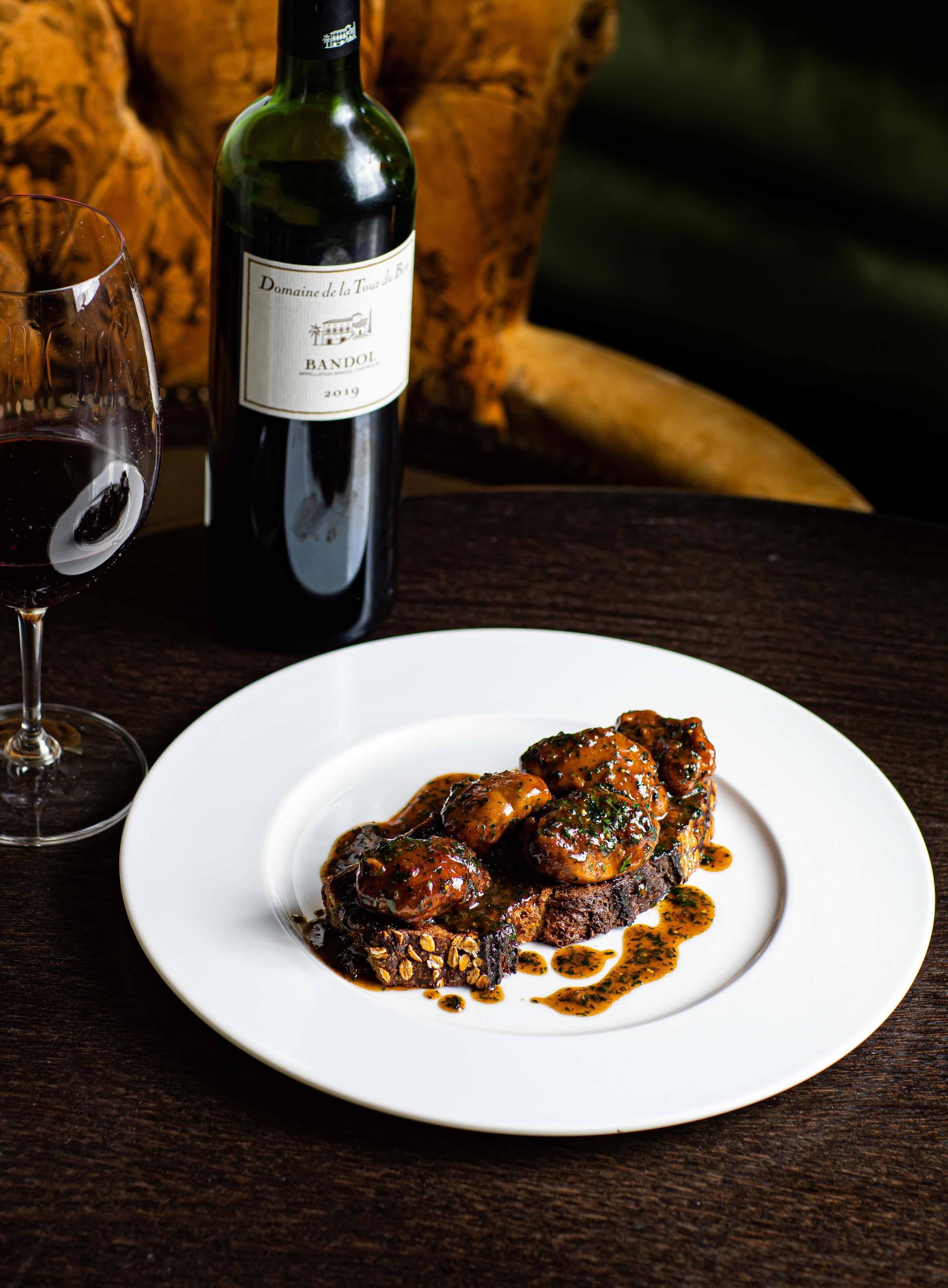 Veal kidneys on Flor sourdough (we were robbed)

The black pudding scotch egg is a perfect take on the bar-snack staple – fatty pork laced with nuggets of pitch gold, plus a dinky bowl of house Oxford sauce (that wasn’t really a true approximation of the thin, spicy regional classic but piquant nonetheless).

Most everything here is artery-furring in the extreme. Realistically, that probably goes for the Caesar salad, too – crowned with a barely-set yolk in a crispy, fried dome of artichoke – but the iceberg crunch and cool dressing feels like a healthy breather among all the gouty stuff.

Speaking of gout, it takes some chutzpah to serve tournedos rossini in London 2022, but thank god Knappet’s got it. A rare fillet steak, sat on a round of toast soaked in beef fat, topped with a hunk of caramelised foie gras. Add fries for the full French coma experience. 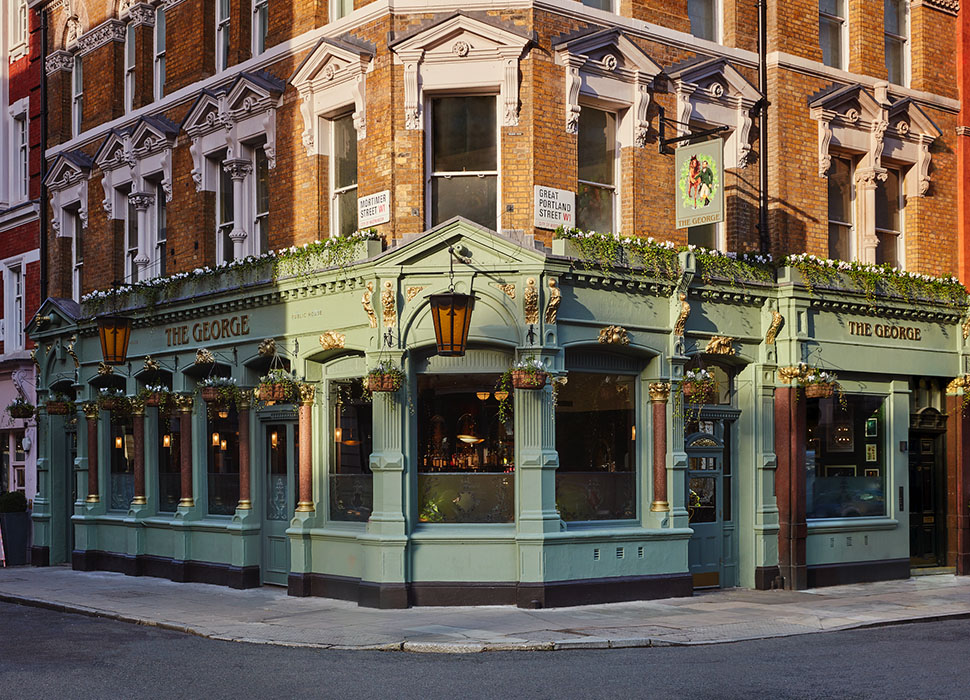 To scoff million-calorie retro classics in a room Blackadder's Prince George would have been cock-a-hoop over.