FEELING ABSOLUTELY STINKING RAVENOUS? THEN JOIN US AS WE CHOMP OUR WAY THROUGH LONDON'S HOTTEST NEW RESTAURANTS, ONE GLORIOUS OPENING AT A TIME. THIS WEEK, a much-lauded, cuisine-mashing restaurant with a new and improved tasting menu

Looking for something a bit more subdued? Townsend – in the Whitechapel gallery – is ideal for long, leisurely lunches.

Or, if you're only after the best, check out our guide to the best restaurants in London. 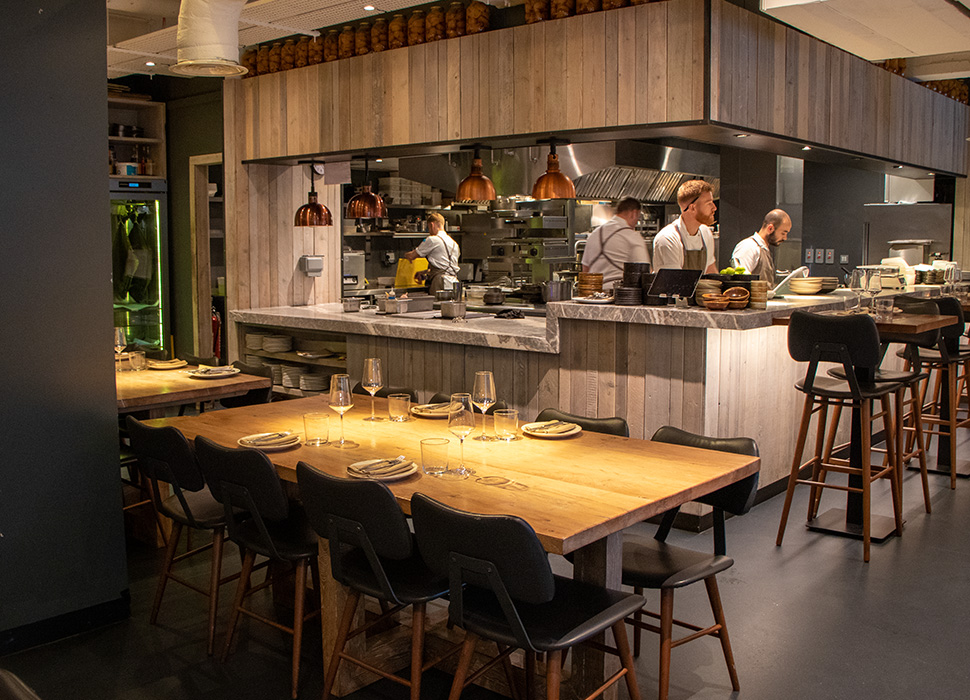 Post-pandemic, loads of London restaurants are suddenly eschewing a la carte options in favour of set menus. It’s a way of stabilising profits in a notoriously fickle industry; it also speaks to the fact that, after being cooped up at home for two years, diners are looking for a full-scale “experience” rather than just a meal. Scully is one of the latest to jump on the bandwagon – the much-loved restaurant, located in a hidden courtyard at the back of St James’s market, opened in 2018, but made the pivot to an eight-course tasting menu in September of 2022.

It might seem like a strange gamble for a restaurant as popular and widely lauded as Scully – if it ain’t broke, why fix it? Since it opened, the restaurant has steadily collected plaudits for its eponymous chef’s super-fusion cooking style, melding the flavours of Malaysia (where he was born) and Australia (where he grew up) with those of his heritage (he is Chinese and Indian on his mum’s side, Irish and Balinese on his dad’s). There’s also a bit of Russia thrown in there for good measure – Scully spent time cooking in the country, which is where he picked up an affection for fermentation and pickling (the jars which line the walls of the restaurant attest to this).

But, actually, a tasting menu is the best showcase for Scully’s showmanship cooking style. The ex-Ottolenghi disciple (he began his career working for the famed chef) is at his best when he’s crafting something cohesive, a solid infrastructure to accommodate his wide-ranging culinary influences. If ordered a la carte, it may all feel too unruly, too jumbled – but in a structured format, it makes sense.

There are two options for lunch and dinner: the regular tasting menu, which clocks in at £110, and vegan option, which costs £90. Though vegan tasting menus are becoming more and more popular in London, the one here stands out for not just being an accommodating counterpart, but a thoughtful reinvention of the main menu that’s every bit as inventive and exciting. In fact, we recommend ordering it over the regular tasting menu – Scully’s fondness for bright, zingy flavours work especially well in a plant-based context. Go for the £70 wine pairing for a splash-out meal that still ranks higher on the affordability scale than comparable London restaurants, or the £40 non-alcoholic option that showcases Scully’s talent for fermenting (the apple, tonka, and marigold kombucha is something else). The compact dining room – which has the feel of a Nordic bistro with its muted colours and clean lines – makes a clean, relaxed background, letting Scully’s cooking speak for itself. Turns out, it’s saying: I’m delicious. The gamble paid off. 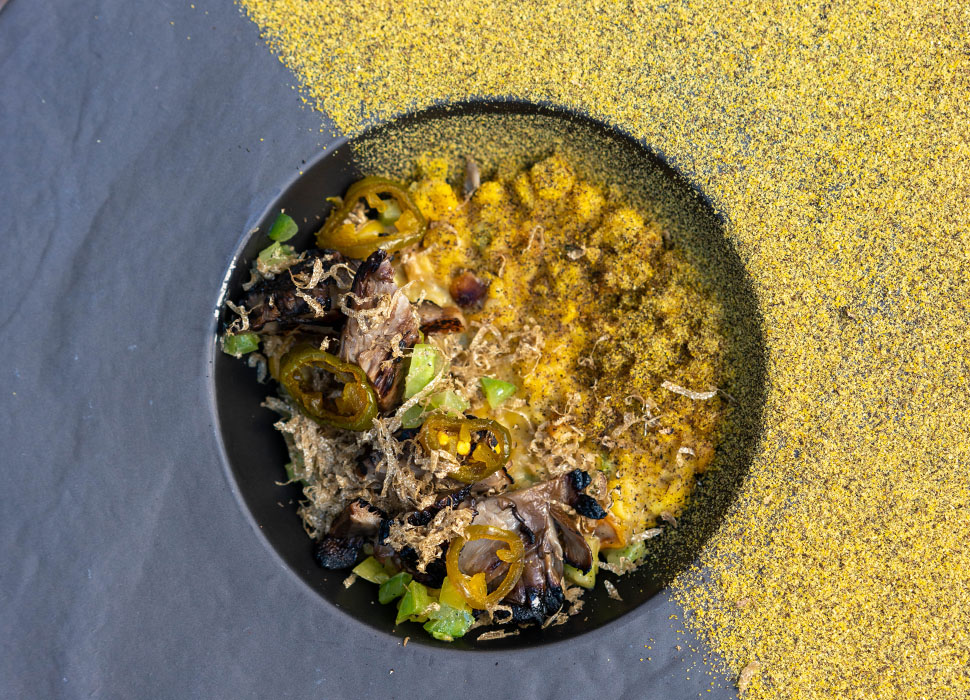 Early on in the meal, both veggies and meat-eaters get an arepa, made with eight-day fermented corn bread and stuffed with a fragrant eggplant sambal, apparently inspired by Scully’s mum. For meat-eaters, it’s served with a side of bergamot-infused labneh; for vegans, it’s a cedro lemon and coconut version. Both are dusted with a divine, dandelion-yellow queso dust, giving it the finger-licking moreishness of a cheetoh.

The vegan menu works up to two main dishes; one is a Nasi Jagung – a traditional Indonesian dish that here trades rice for cracked corn, cooked down to a creamy, canary-coloured, risotto-like mound and served with barbecued maitake mushrooms and candied jalapenos. As satisfying as a bowl of mac and cheese.

For dessert, Scully once again taps into adolescent memories with a caramelised coconut sticky rice dish served with jackfruit sorbet. A Southeast Asian street staple, Scully’s version – fermented in a rice cooker for ten days and served with jackfruit sorbet, slow-toasted jasmin powder, and shards of dark chocolate – is a loving tribute to his his favourite childhood snack. 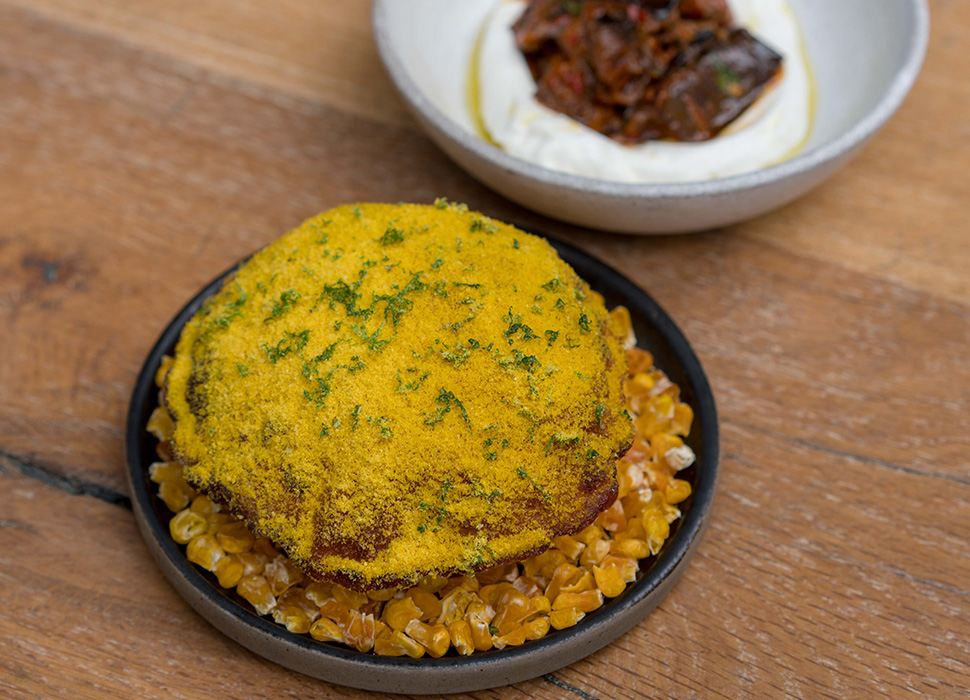 To try Scully's super-blender cooking style in its highest form.