Fallow isn't cheap, but shelling out on their ultra-inventive food is worth it

FEELING ABSOLUTELY STINKING RAVENOUS? THEN JOIN US AS WE CHOMP OUR WAY THROUGH LONDON'S HOTTEST NEW RESTAURANTS, ONE GLORIOUS OPENING AT A TIME. THIS WEEK, A sustainability-focused, food-nerd paradise near Piccadilly Circus

Fallow isn't cheap, but shelling out on their ultra-inventive food is worth it

Buttered cod's head a bit too much for you? Not to worry – those with a less intrepid palate can try pan-Indian plate-sharer Manthan or Japanese noodle bar Koya Ko.

Or if you're after the city's most slap-up dining options, feast on our guide to the best restaurants in London. 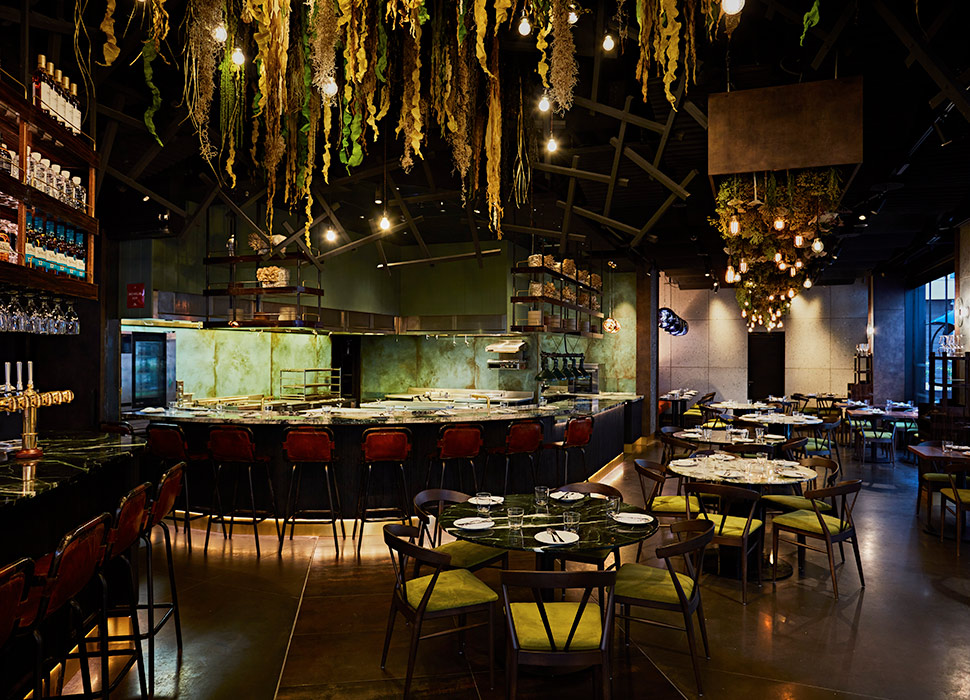 Trends, as we all know, invite counter-trends. In the food world, this law holds especially: when the pendulum swings towards sharing plates, you can bet it'll careen all the way back to a starter-and-main formula eventually. These days, the reactionary trend – a riposte to the technique-forward cooking championed by Heston Blumenthal et al – is straightforward, no-frills food that’s dictated by cravings rather than science. Super-cool London restaurants like Rita’s or Trattoria Brutto showcase their dishes with lo-fi, flash-heavy photos that depict, simple ingredients on a plate, rather than anything concerned with the chemical transformation of molecules. The message: technical gastronomy is for nerds now.

So it’s actually refreshing to find a new restaurant that's so obsessed with ingenuity, they’ve turned their dining room into a quasi-food lab, complete with a dripping stalactite-like ‘seaweed installation’ that doubles as both chandelier and garnish. Above the bar, floating shelves hold strange, cubic contraptions sprouting giant mushrooms – a pet project for the chefs, who are experimenting with growing fungi in the restaurant. Everywhere in the large, high-ceilinged space there’s a nod to Fallow’s obsession with food as specimen – not just sustenance, but an area of inquiry.

So it’s probably unsurprising that the chefs, Jack Croft and Will Murray, met in the kitchen at Dinner by Heston, Blumenthal's Knightsbridge joint. The titan chef’s ceaseless appetite for invention obviously rubbed off on the pair, and they decided to combine this ethos with another shared value – sustainability. After a short stint at Carousel in Marylebone, they took up residency at 10 Heddon Street – traditionally an incubator for some of the city’s most exciting and ambitious new restaurants – where they polished their ‘conscious dining’ shtick, applying their Bill Nye approach to reducing food waste and centering local, in-season, vegetable-heavy ingredients.

Now, in a 65-cover space steps at the moneyed heart of St James’s, their vision can be fully realised. The heavily-segmented menu (divided into hyper-specific sections like ‘breads’ and ‘dairy cow cuts’) mixes familiar items with experiments in upcycling. Take the cod’s head – normally reserved for stocks, here it’s served drenched in a bright orange sriracha butter sauce. Everything has been obsessively tested and tweaked at the chefs’ various pop-ups, so expect fine-tuned dishes with a forensic approach to flavour. And, though you may chafe at the tourist-heartland prices, there's nary a miss on the menu. It’s the revenge of the nerds, and it’s delicious. 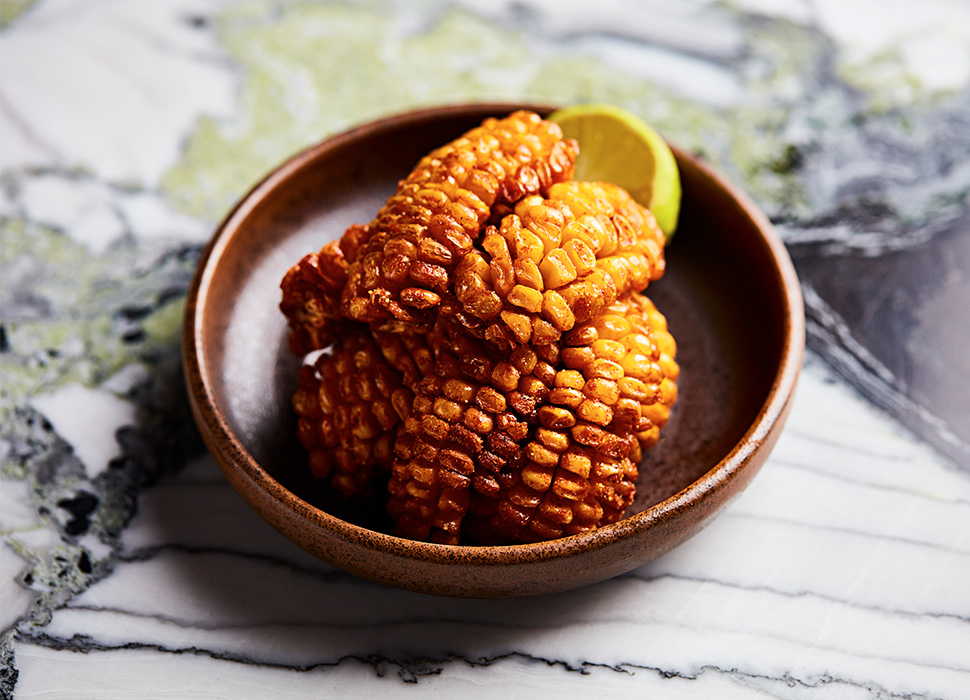 The corn ribs have become Fallow’s calling card, and they’re a marvel: tender strips of corn skinned from the cob and dusted with their house kombu seasoning, which stains each kernel red and gives the vegetable the same meaty depth of flavour of a BBQ-d loin back.

The mushroom parfait is the best of the menu’s ‘small plates’ section – a parfait of puréed shiitake mushrooms crowned with glisteningly caramelised grey oyster mushrooms and shaved fennel. It’s a pleasant notch below the richness of a duck confit, and served with house-baked sourdough to be spread liberally on.

That humble brassica, cabbage, is given a Fallow glow up: a hunk of hispi is confit-d, with bits of black garlic between its dandied leaves and a heap of chestnuts on top. The sauce – buttery at first taste, with a funky hint at something fermented – adds a bit of intrigue. 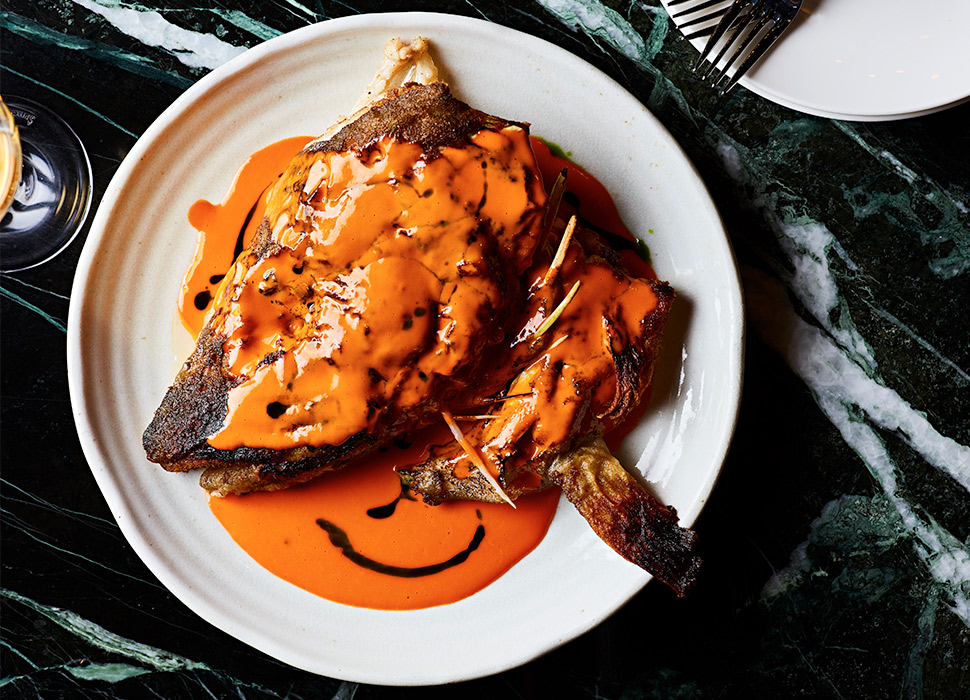 Cod's head, in all its sriracha-drenched glory

You’re a died-in-the-wool food geek who can’t afford the Fat Duck (but still has some cash to splash).

10 of the best fish and chip shops in London

The most magical (but not clichéd) places to propose in Europe