Summer is looming, so you're going to want to raise a toast to it. Here are the best walk-in, no-reservation bar, pub and market terraces for alfresco drinking this season 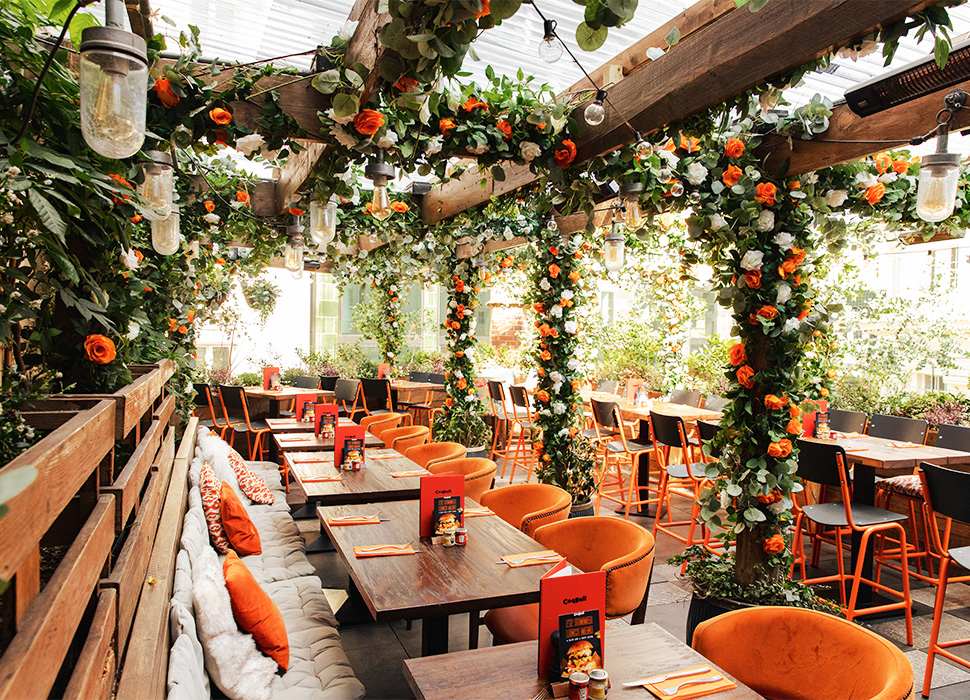 Soho isn't exactly flush with rooftop terraces (certainly not without a Soho House membership). Praise be, then, for Coqbull – a natty chicken restaurant that just happens to have opened a seasonal, 47-seater rooftop, draped in on-brand orange foliage and fairylights. It's part-covered and thus perfect for escaping the swelter and the inevitable downpours. Either way, it's an ideal bolthole for knocking back a frozen pink negroni or three, away from the thronging bustle below. 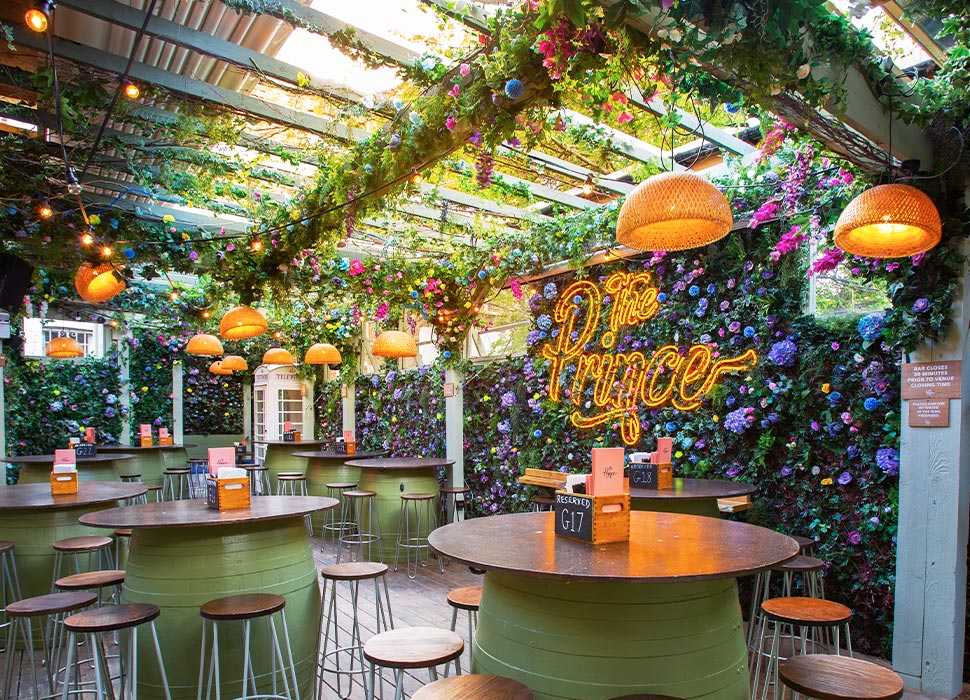 A slightly chichi Hammersmith outfit set in a converted pub with a very pretty (and very giant) terraced garden space. The star feature here is the retractable roof that shields outdoor drinkers from the elements – a pretty irresistible sell when it starts chucking buckets at beer o'clock. Another strong lure? The tasty food on offer at the various pop-up stalls that trade here – this season, it’s burgers from Filth & Co, Neapolitan pizzas from Nonna Madonna, or sushi, bao and dumplings from Temaki Bros. Keep an eye on their calendar for special seasonal events too; from bottomless bank holiday brunches, to summer DJ parties, there’s more to The Prince than your average local boozer. 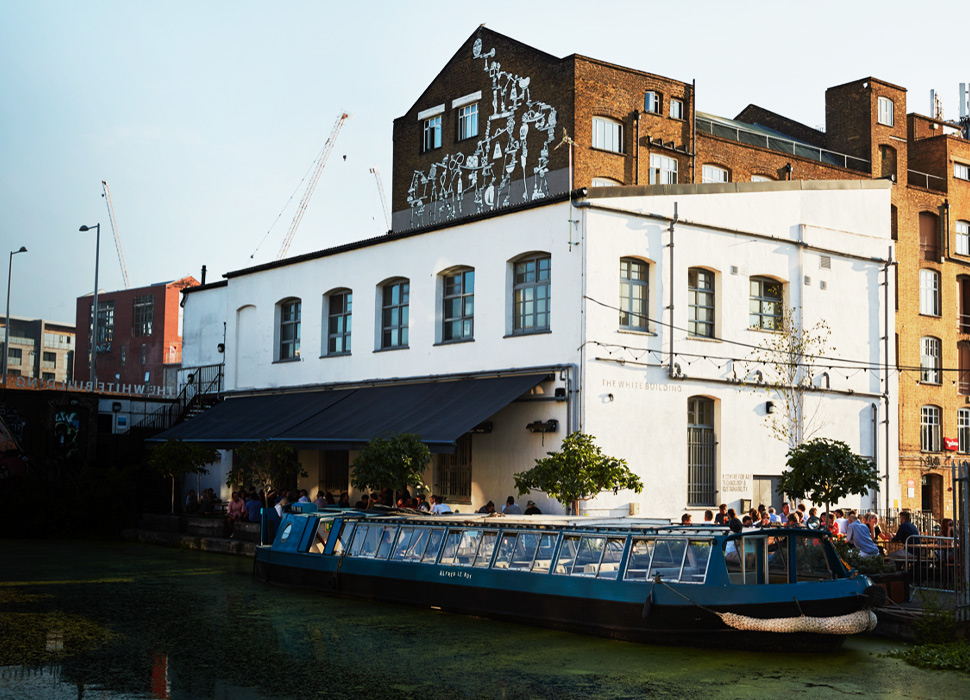 This brewery's distinctive white pile is a Hackney canalside classic

Hackney Wick’s warehouse district is home to a gang of cool bars and restaurants housed in former factories – including Crate, a beloved microbrewery overlooking the canal. It produces delicious brews (try the fan-favourite pale ale) and excellent, beer-friendly thin-crust pizzas. Outside is where the real magic happens, though: canny drinkers can snag the suntrap tables on the sizeable terrace, while the rest spill out onto the towpath, pints in hand. 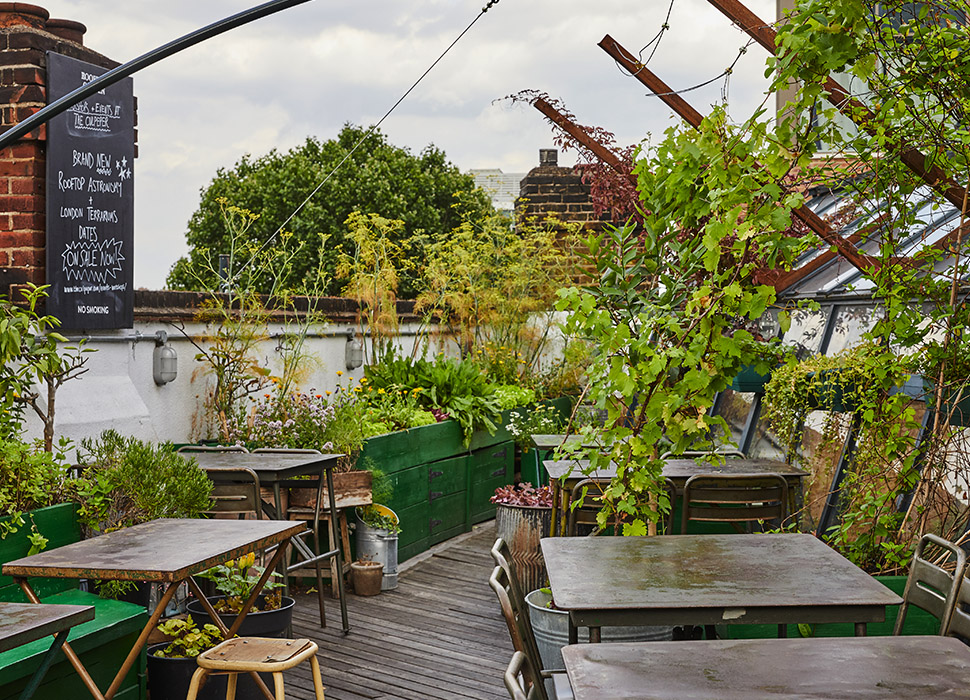 Ethical booze is the vibe at The Culpeper

Despite sitting on a hectic stretch of Commerical Street, Aldgate East's most pleasant pub is a summer must due to its verdant rooftop garden/terrace, from which the kitchen sources vegetables and herbs for both plates and tinctures (that is to say, pungent stuff what goes in cocktails). This year, they've rebranded it as the 'Culpeper Regen Rooftop', with a broad regenerative agriculture theme laced through both the food and, crucially, the booze. To this end, there's a focus on biodynamic wine, plus stiffer stuff from Highgate's Sacred Spirits and Absolut's carbon-neutral line. Tranquil stuff. 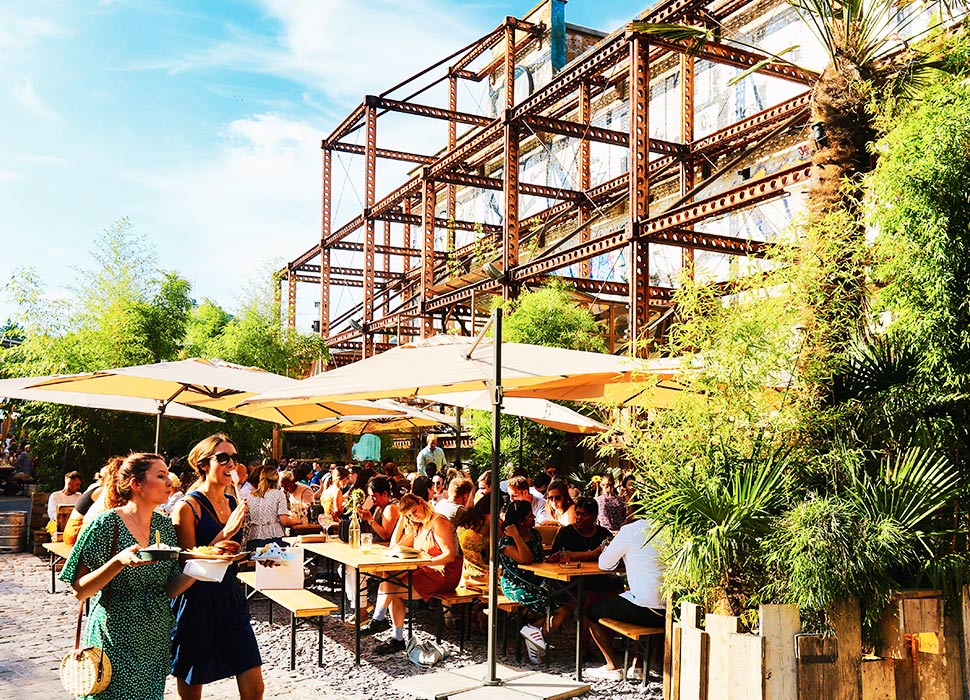 Germans are so fussy about their beer that breweries in Deutschland are regulated by a so-called ‘purity law’ that ensures their products consist of barley, hops, water, yeast – and that’s it. German Kraft – hidden at the back of Mercato Metropolitano – takes this dogmatic approach to the golden nectar at their on-site brewery, following tried-and-tested techniques that have been perfected over centuries of beer-making in Bavaria. They even distill London’s sub-optimal tap water before mixing it so that its mineral harshness doesn’t sully the lager. You can sample these prized pints on a sprawling terrace – touted as London’s largest beer garden, it’s got space for 500 bums, a legion of heaters for cold eves, and access to the many yummy food stalls of next-door Mercato. 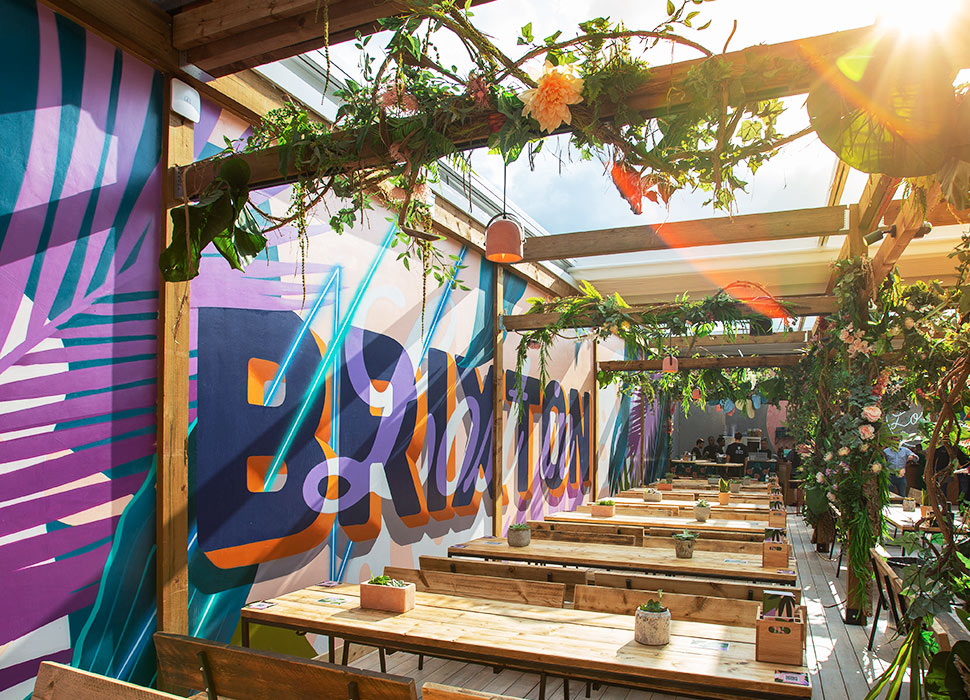 Betcha didn’t know Brixton Village was home to a hidden upstairs Shangri-La, did you? Track the signs through the bustling market to find this giant, greenery-festooned terrace with a handily retractable roof – an ideal spot for a bit of booze-fuelled respite from the clamour below. The cocktails are ‘Latin-inspired’ (think zhuzhed up margs and caipirinhas rather than watery mojitos), many of the brews are local and the edible titbits are sourced from the wicked joints in the market itself (jerk masters Fish, Wings & Tings, okonomiyaki/goyoza mavens Okan and brilliant burger slingers Black Bear are all repped). DJs are on hand to keep the atmos up through the night, while those of you wanting to start the weekend right should head to Saturday’s Lost in the Tropics fiesta: a bottomless afternoon of rum punch and party beats. 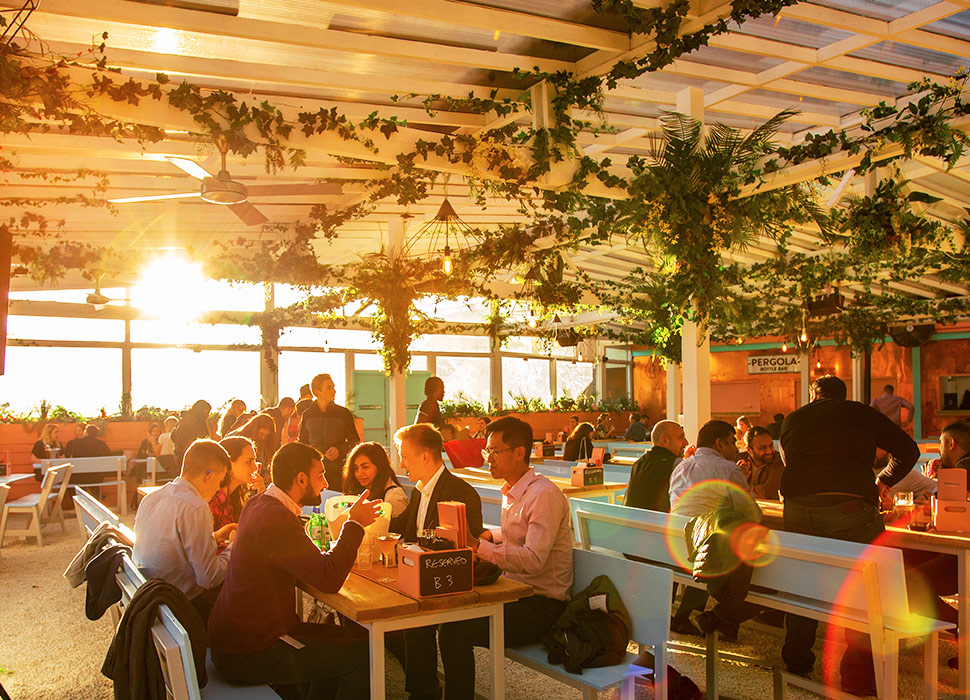 A massive, dual-level outdoor food-hall-cum-magic-garden with a bevy of food stalls and well-stocked bars, the venue FKA Pergola Paddington has been transformed into the Mexican-inspired Pergola Paraíso for 2022. Think: palm trees, covered cabanas and frozen cocktails, all soundtracked by the sort of hazy dance beats designed to transport you from an average Wednesday night in central London to the warm beaches of Tulum. They’re also prepping a calendar of ‘Dusk’ events for the weekends, promising fire performers, DJs and various other things you probably wouldn’t find at Wetherspoons. 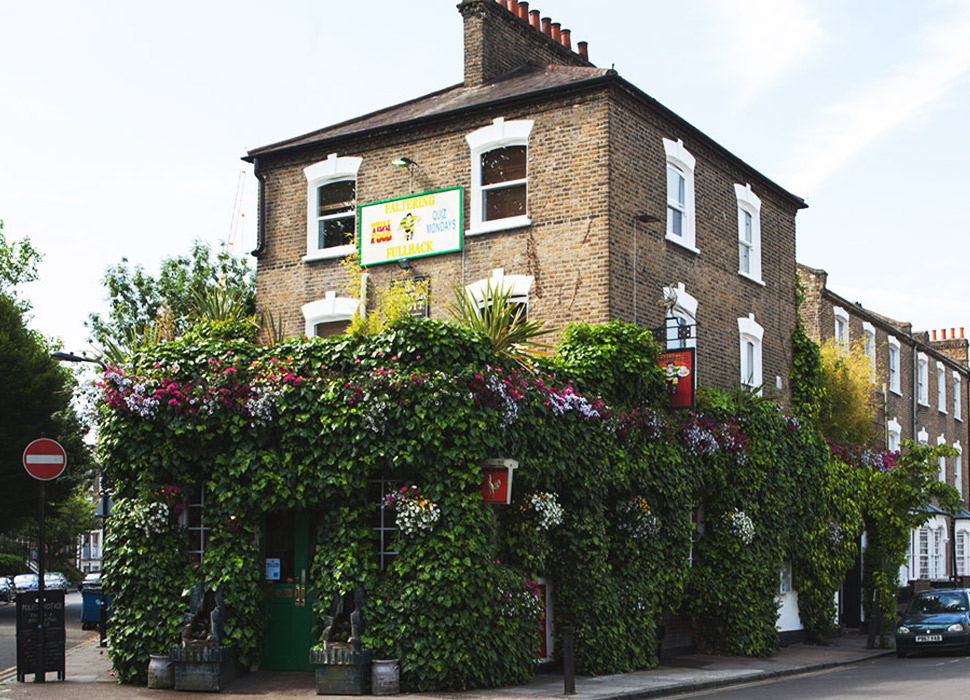 This loveably decrepit boozer is a north London institution that draws droves of good-timers most nights of the week. Inside, the walls and ceiling are decked out in lovely Irish paraphernalia and other random tat. Outside, there’s a spacious, multi-tier space that’s shrouded in tangled ivy, giving it a very ‘Lost Boys hit the secret garden’ vibe. The Thai food on the menu is decent and the beers are well-priced – just watch out for all those stairs once you’re a few pints in. It's currently enforcing a walk-in only policy, but, since this place is mega-popular, it’s advisable to show up early.

Rooftop at The Standard 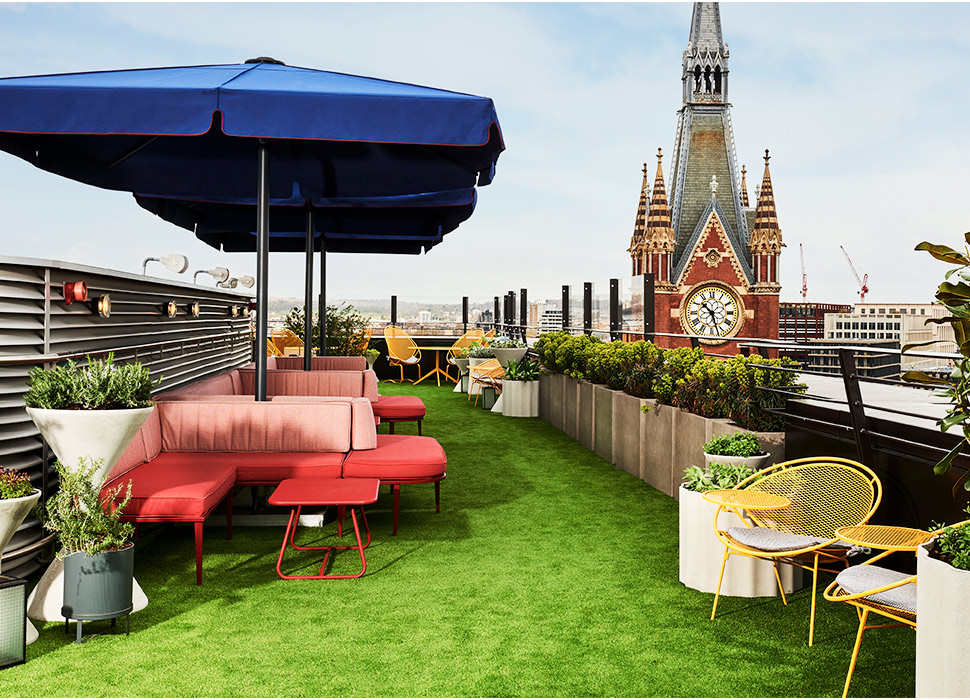 A view fit for a King('s Cross)

A brand-spanking-new terrace at the top of The Standard hotel in King's Cross. You’ll find the requisite 11th-floor views of London’s skyline here, plus a brief but thoughtful drinks menu of seasonally appropriate cocktails (Elderflower Collins, please) and Italian wines. If you get peckish, there are vegan and meaty dogs – just pick your sauce and topping combo. Though it accepts reservations at the moment (with some tables set aside for walk-ins), come mid-June, it’s walk-in only.

Frank’s Café – the now-iconic alfresco bar on top of a former multistorey car-park in Peckham – might have pioneered southeast London's panoramic drinking scene, but the nearby Bussey Building warehouse (and the surrounding Copeland Park complex) has long been the area’s true cultural nucleus. Thus, it seems only fitting that the Bussey has its own, slightly loftier drinking den – open-air but sheltered from the elements, with a swooning technicolour vibe and a menu of mostly classic cocktails to bolster the hazily rousing views of the London skyline. There’s decent pizza for when the booze kicks in, and a provision of walk-in spots for the disorganised (though, like Frank’s it gets absolutely overrun in good weather).

It's a Shard life at this south London beer yard

Stumbling distance from both London Bridge station and the natty enclaves of Bermondsey Street, Vinegar Yard is an open-air bar / street food hub / flea market / art gallery mish-mash, not unlike one of those sprawling Euro booze gardens you desire so achingly now we’re grounded in Blighty for the turn of the seasons. Bookings aren’t compulsory but they’re probably recommended, especially if you’re after one of the private, Bacardi-sponsored ‘Rum Shacks' – and eats from swell outlets like Baba G’s Bhangra Burger and the Lebanese-inspired Nik’s Kitchen are as much of a draw as the gallons of draught beer, wine and cocktails. No sour vibes here. 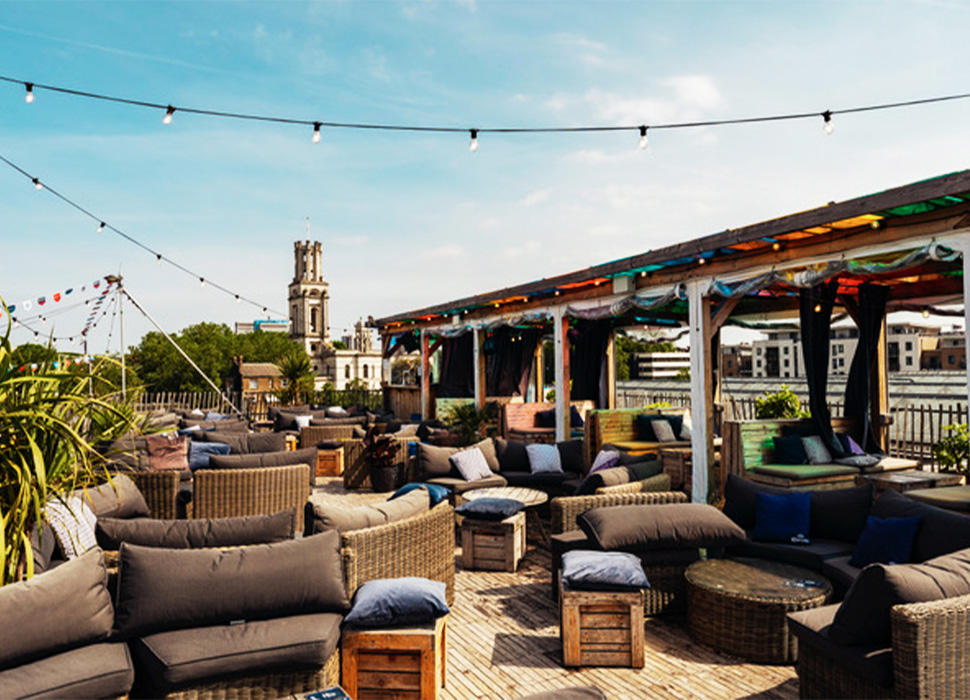 Need more entertainment for your evening than just a nice view with some pints and pals? Skylight’s activity-filled rooftop venue will ensure there are no awkward silences (apart from if any sore losers flounce off in a competitive huff). Outdoor summer lawn games such as croquet and petanque will help you to pretend you’re swooning around the grounds of Bridgerton instead of hanging out in Wapping, while indoors you can find ping pong, shuffleboard, plus DJs and more.

This Waterloo rooftop venue might take a slightly liberal attitude towards history (named for the place that Napoleon was exiled to in 1814, they’ve gone heavy on the ‘party island’ vibe and lighter on the political turmoil). But hey: no-one’s here for a lesson anyway. Instead, soak up the tropical vibes replete with summer outdoor film screenings, Sunday night stand up comedy and a food menu full of tacos, hot dogs and other treats that ol’ Bonaparte could have only dreamed of. C’est tres bien!

Reopening for the summer at the start of June and promising a brand spanking new event space for 2022, Dalston Roof Park has gone from humble beginnings to a fully-fledged East London hotspot. Hosting screenings, yoga classes, music events and more, the team behind the space have been expanding their offerings year on year. More than just a rooftop bar (although it is very good at that too), this tucked away spot near Dalston Junction is a proper venue that just happens to be located a little further skywards than normal. Stay tuned for more info as they unveil this year’s plans. 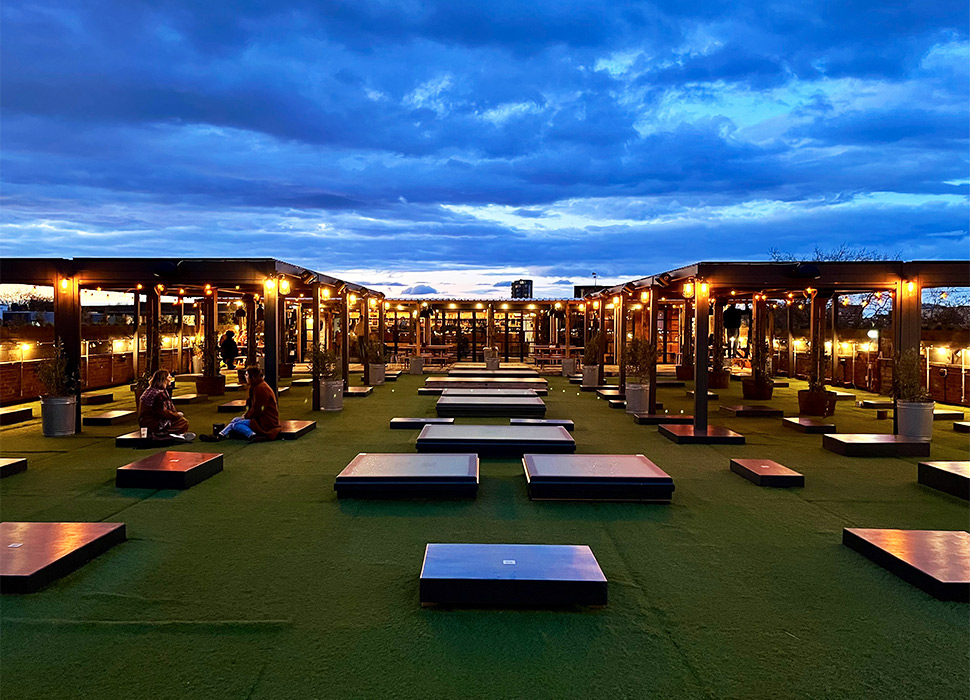 A stone’s throw away from Broadway Market, Netil 360 – nestled above the creative hub of Netil House – is an easy contender for the city’s hippest roof hangout. You won’t find cheesy theme nights here; instead they stock local breweries and bring in guest DJs to provide the soundtrack into the night. If you’re up for getting hot rather than keeping it cool, they’ve even got a sauna on the roof to cleanse yourself before you re-tox. Sauna’s need to be pre-booked, but the bar itself is walk-up only. 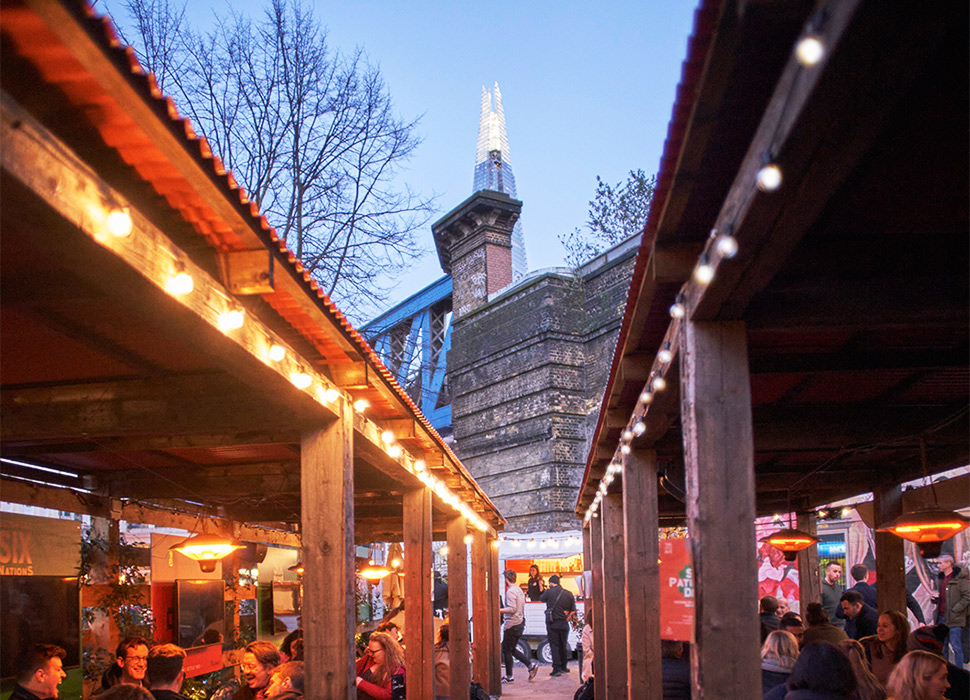 Located under the arches of Southwark Street, just around the corner from London Bridge, Flat Iron Square is the place to remember when trying to placate people with an easy meeting point. It’s not just convenient mind, it’s delicious too, with venison burgers from Gamekeeper, Lebanese delicacies ℅ Lil’Watan and pizza perfection from Good Slice all lining up to keep stomachs satisfied. Tuesdays are pub quiz nights and, in previous years, Flat Iron has proven itself as a go-to place for big screen sporting celebrations. Advance booking is available, or just rock up on the night and squeeze in.