A new season is on the horizon so it’s time to pack out those diaries. Here’s the run-down on the best stuff happening in the capital this winter from dazzling light shows to epic theatre

London is fabulous at any time of year, but as the cold, dark nights draw in and the temperature drops, any winter blues are quickly dispelled as the capital gets a fabulous glow up for the festive season. Want to fill your eyes with gleaming Christmas lights in extraordinary settings? London’s got you covered. After world-class art and theatre? It’s all here in the Big Smoke. Whether you want to explore some of the prettiest parts of the city after dark, sip the best Christmas cocktails or buy one-of-a-kind gifts for your family and friends, you’ll find it all here in London this winter.

Want to know how to have fun further afield? Check out the best events happening in Europe this winter.

Fuel up on your action-packed trip at these brilliant London restaurants. 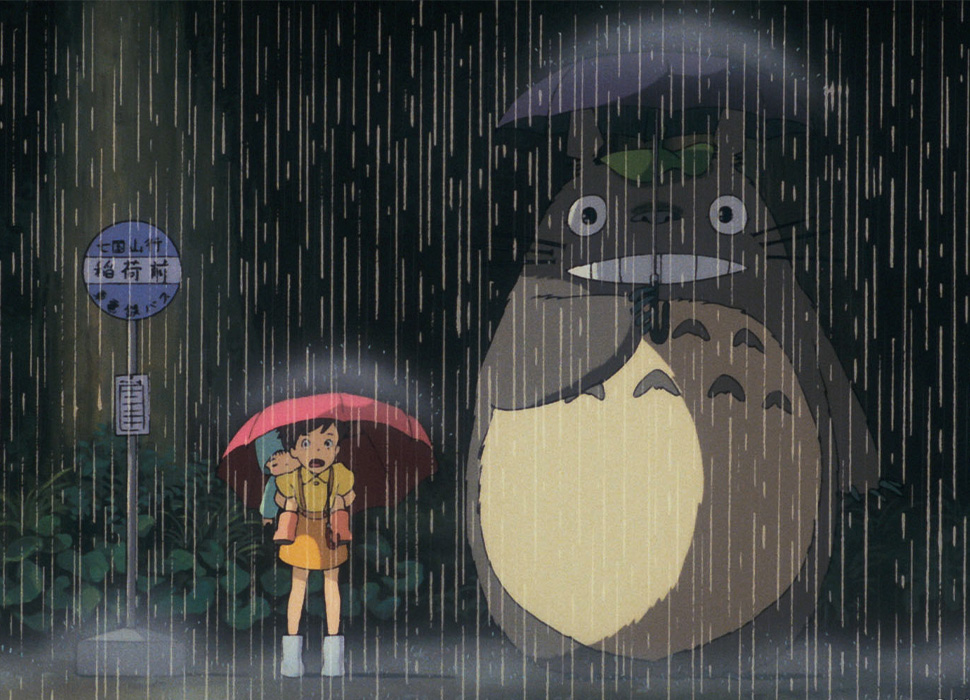 A whole bunch of theatre heavyweights have joined forces for this blockbuster show. The revered Royal Shakespeare Company are behind this grand staging of the iconic Japanese Studio Ghibli 1988 animated film ’My Neighbour Totoro‘, which follows a pair of children who move to the countryside and stumble across a world of magical creatures including the ancient giant owl/bear/cat creature Totoro. This is the biggest adaption of the film anywhere in the world, even Japan. It’ll include puppets built by Jim Henson’s Creature Shop and it’s been executive produced by Joe Hisishi who penned the film’s score. It’s even been given the thumbs up from Hayao Miyazaki, Ghibli’s legendary founder. In a nutshell: one to add to your diary.

At over 250 years old, a whopping 300 acres and home to grand Victorian glasshouses, tree-top walkways, a huge Chinese pagoda and more exotic and rare plants than you can shake a watering can at, Kew’s Royal Botanic Gardens is one of the most impressive green spaces in the world. But, come Christmas the already beautiful place gets a seasonal glow-up. Christmas at Kew lets you follow a winding trail after-dark through the foliage, passing under shimmering tunnels of light, by lakeside illuminations and giant laser projections bouncing off the glass of the bombastic Temperate House and through a flicking flame-lit fire garden. Look out for mulled winter warmers and toasted marshmallows to keep you warm along the way. 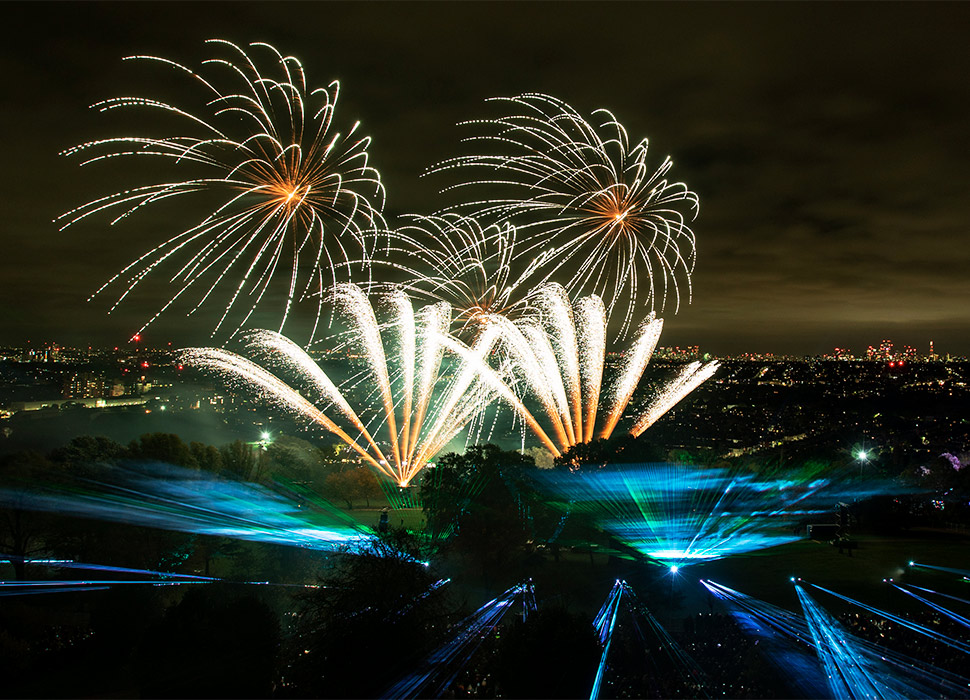 Alexandra Palace’s Bonfire Night celebrations are easily one of the biggest and best in town. It already has one of the best panoramas of London as a backdrop for the impressive bangs and sparks, which are also accompanied by a DJ soundtrack, epic street food, a toasty bonfire and, if that wasn’t enough, a huge German Bier Fest complete with frothing steins and oompah bands. If you give a schnitzel, you’ll be there. 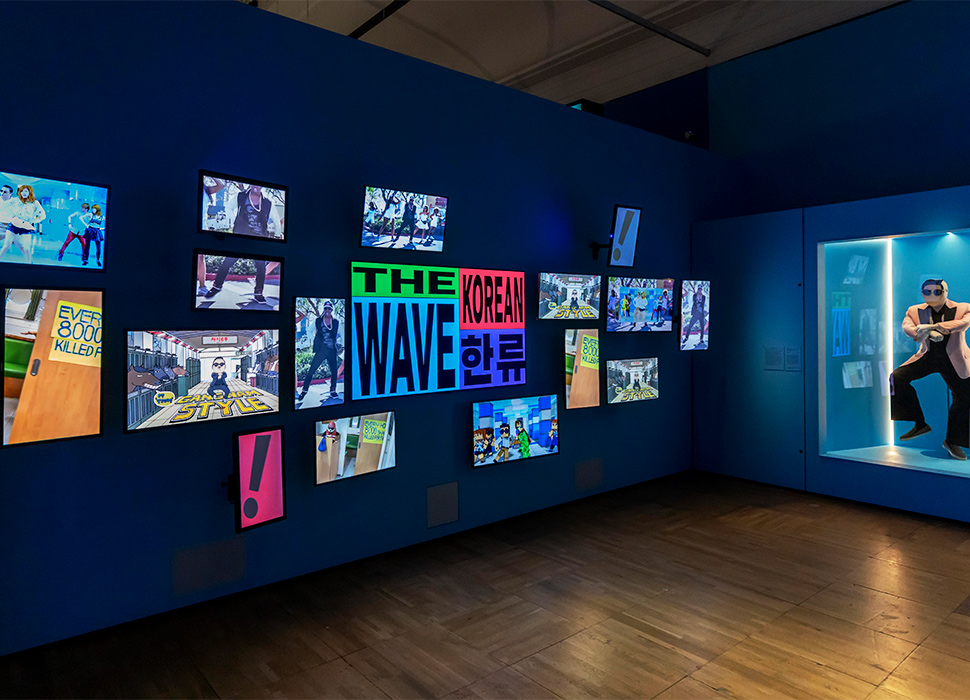 You’ve danced to Gangnam Style. You’ve swooned over BTS. You’ve watched Squid Game through your fingers and got lost in the world of Bong Joon-ho’s Parasite. Now, find out how Korean pop culture took over the world, and where it’s heading next, at the Victoria & Albert Museum’s blockbuster exhibition. From neon art, propaganda leaflets, documentary photographs, traditional hanbok outfits and popular costumes, films, video projections and fan banners, this show takes in everything from K-pop, K-beauty and cinema to television, fashion and tech.

Hogwarts in the Snow 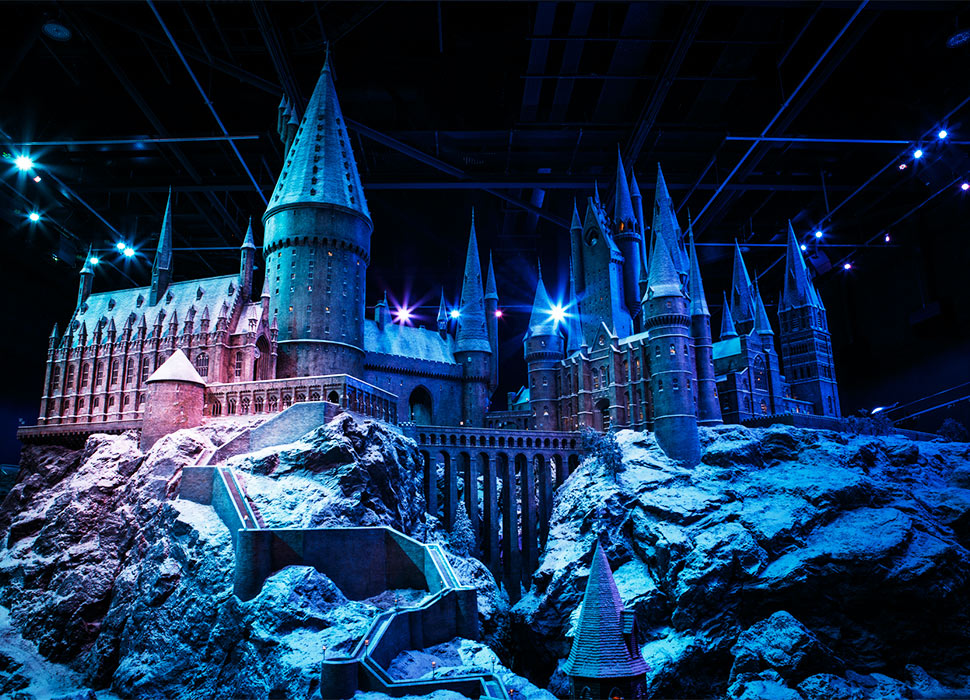 Even the wizarding world gets more magical at Christmas / Image: Dan Wong

Hidden away on the outskirts of Watford, Warner Bros. Studio Tour London – The Making of Harry Potter, might not be the easiest attraction to get to (you’ll have to get a special bus there) but it's worth the journey, especially for fans of the wizarding series. Not only can you get up-close and personal with sets from the films and glimpse a behind-the-scenes look at the props, costumes and effects, but during the build-up to Christmas the place gets even more magical. Walk through the Great Hall kitted out in dripping icicles, silver decorations and flaming Christmas puddings for the Yule Ball. Explore the Gryffindor common room packed with red and gold ornaments and see iconic sets like the Forbidden Forest, Diagon Alley and the Hogwarts Castle model sprinkled in a blanket of film-set snow. 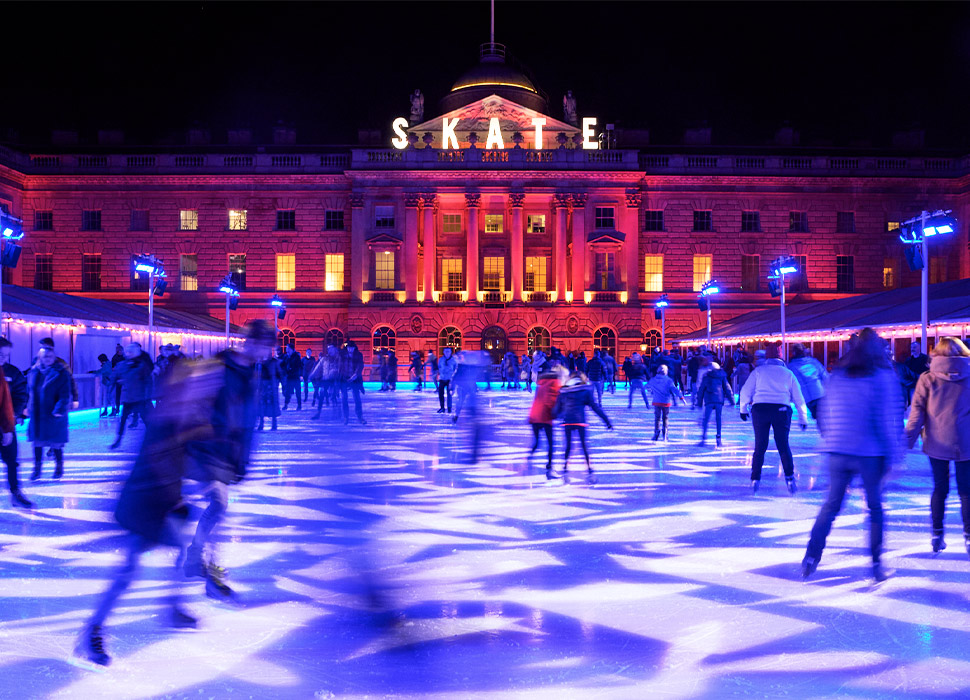 Slipping and sliding about in Somerset House’s grand neoclassical courtyard has become an essential winter experience in the capital. Not only is it the perfect ‘Christmas in London’ scene with a resplendent 40ft-tall fir tree towering over the ice rink, but glowing lights and steaming hot chocolates from Hotel Chocolat are also on hand. On weekends it turns things up a notch for the rink’s legendary Skate Lates when some of the city’s coolest DJs and club nights come to spin tunes for the skaters. This year the line-up includes Pxssy Palace, Girls of Grime and comedian James Acaster. 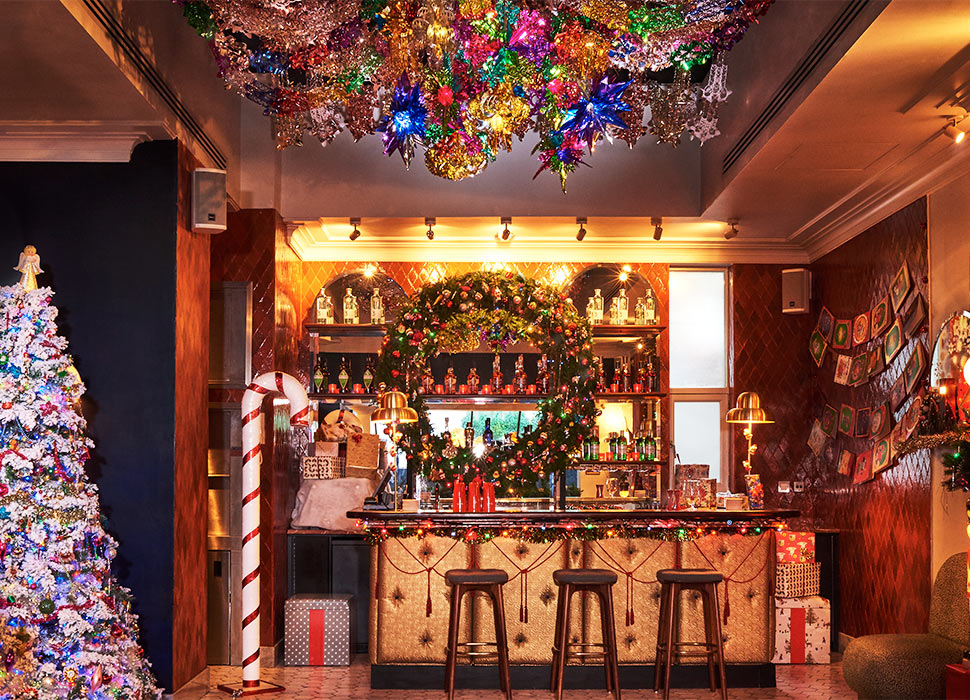 If Christmas means tinsel and all the kitsch trappings for you, then don’t miss a trip to this festive bar tucked away above a boutique hotel in Covent Garden. From the folks behind New York’s famous Miracle on Ninth Street joint, the Henrietta Hotel has transformed its upstairs cocktail bar into a scene from ‘White Christmas’ with retro decorations, old-school alpine accessories and festive takes on classic cocktails served up in chunky Santa mugs and high-balls with reindeer scenes. Eggnogs all round! 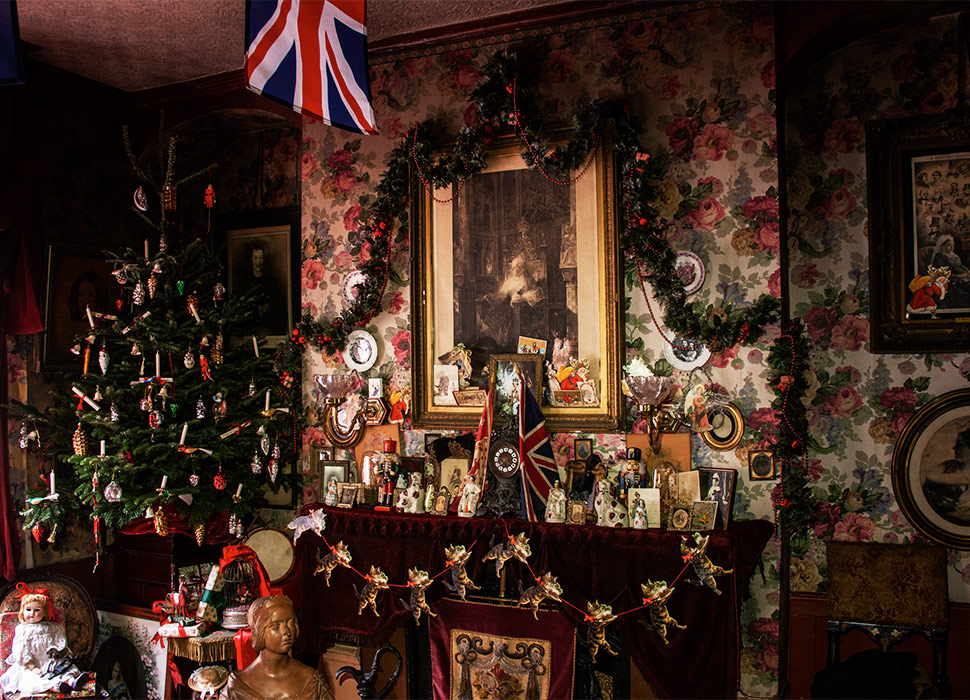 Step into a Christmas time capsule at Dennis Severs’ House

Step back in time with a visit to this ornate Huguenot house hidden away down a cobbled backstreet in Spitalfields. A living time capsule, each of its 10 rooms has been kitted out to recreate the surroundings of a family home between 1724 and 1914 as if the inhabitants had just left moments before. Part museum, part art piece; creaking stairs lead to parlours, smoking rooms and bed chambers filled with antiques, plush furnishings and timeworn curios laid out as residents of old may have used them. The house gets a seasonal make-over for Christmas with rows of gingerbread figures, towers of sugar and figgy pudding mix laid out in the 18th-century kitchen, Christmas trees covered in crimson decorations and a lavish holiday feast set out on the dining room table. Book an after-dark tour to see it in all its candle-lit glory. 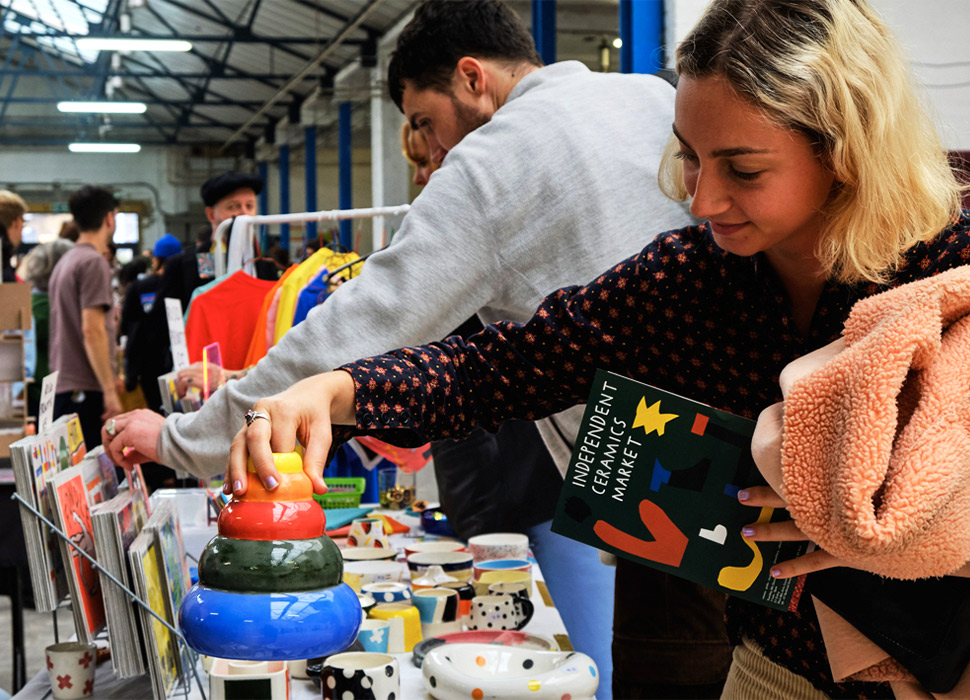 No need to settle for a body wash gift set this Christmas. Treat your friends and family to one-of-a-kind stocking-fillers at this crafty market. Over 50 ceramicists gather together at these art bazaars to showcase everything from cups and crockery to sculptures and vases. It's also a chance to meet the makers – a mixture of up-and-coming affordable artists and more established names – to find out more about how each piece is made and pick out something truly special and unique. Once your bags are bursting treat yourself to some baked goods and mulled wine. 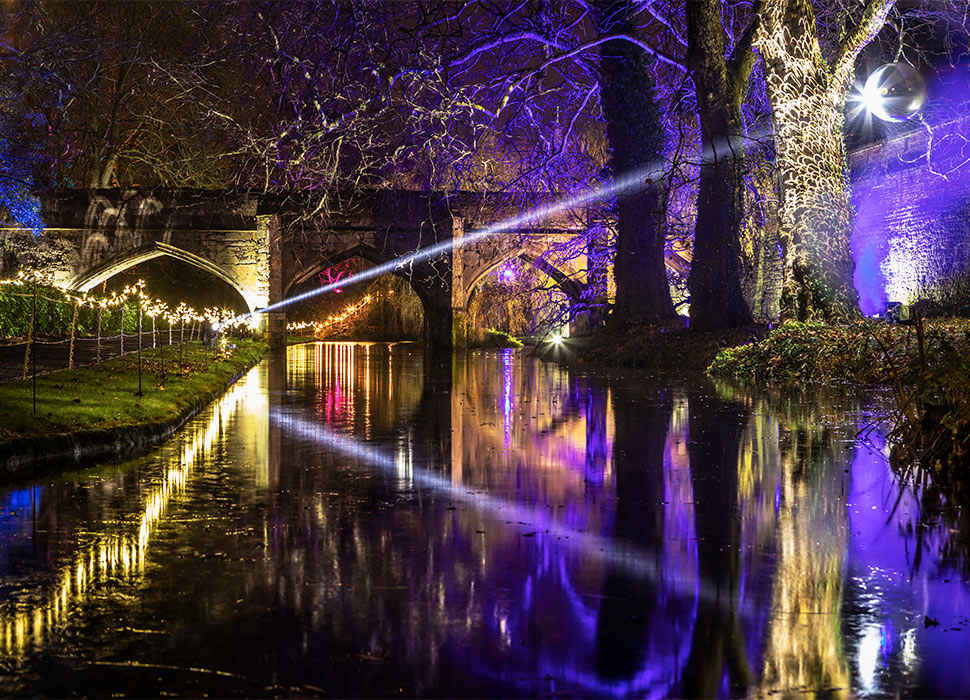 Half grand Tudor place, half gorgeous Art Deco dream; Eltham Palace is a hidden gem in the depths of south London well worth making the train journey out of the centre of town for. As well as rooms that look straight out of a film set filled with 1930s mod-cons and gilt geometric furnishings, the gardens are also pretty spectacular with fountains, ponds, rose beds and sloping lawns all surrounded by an imposing moat. Grab the chance to walk around them and see the greenery illuminated with twinkling pea lights, laser projections and scattered with glowing orbs. Magical.

The best pumpkin patches near London