The best roast dinners in London

From cosy pubs in scenic spots to Soho basements and grand steakhouses, here’s our pick of where to tuck into the best Sunday lunches in London – including some brilliant vegetarian options

If there’s one thing London excels at (and obviously there isn’t just one) it’s a roast dinner. What could be a finer end to a day of sightseeing than sitting down to a meaty feast surrounded by perfectly crisp roast potatoes, Yorkshire puddings, gravy and all the rest?

If you're planning to eat your way around the capital, why not check out our lists on the best restaurants and most exciting new foodie openings in London.

The Duke of Richmond, Hackney 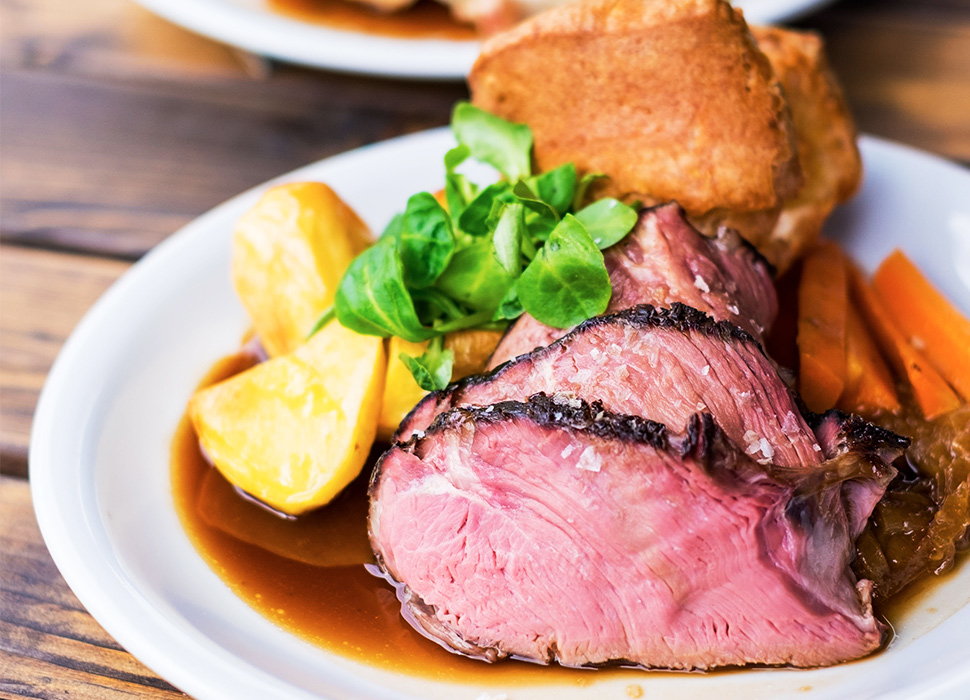 At this handsomely restored Hackney boozer, chef Tom Oldroyd oversees a menu that’s sophisticated and full of surprises, but will also leave you happily stuffed. The starters are spectacular (think smoked ham knuckle croquette with celeriac remoulade and a fried egg, or a miniature Cornish crab chip butty), but save space for slow-roast Yorkshire lamb leg and dauphinoise potatoes, corn-fed chicken with tarragon and madeira jus, or roast rump of Highland beef. There’s always at least two superb vegetarian options, plus filled choux buns and ice cream sundaes for dessert, and a kids menu. 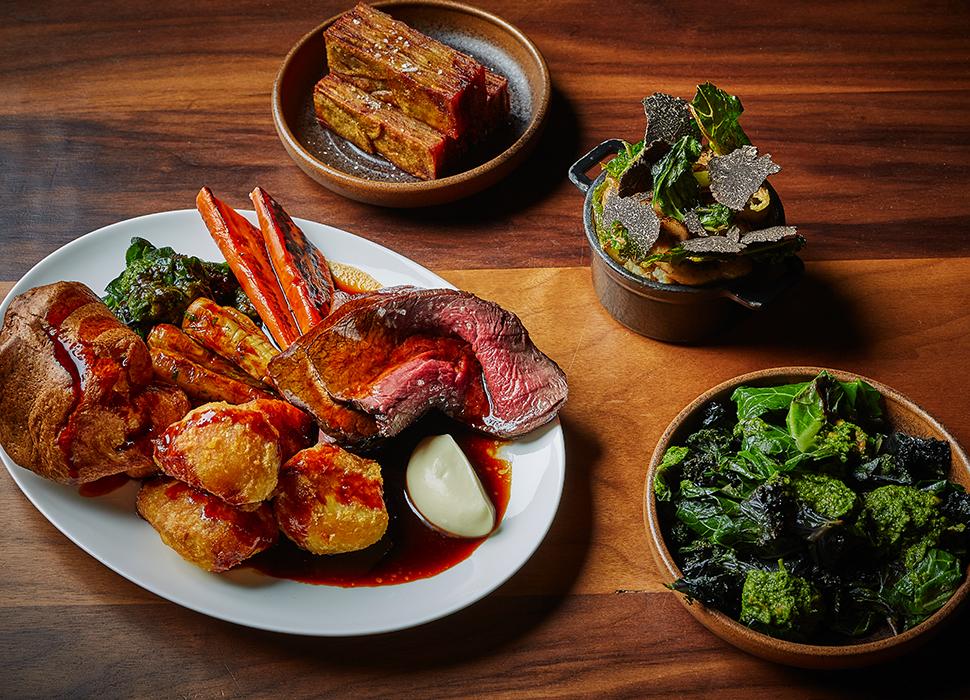 Jack Croft and Will Murray's sustainable and hyper-inventive British restaurant is excellent any day of the week. But on Sundays, these former Dinner by Heston chefs go back to beautiful basics, by dropping some rollickingly good and unprepossessing roasts in among their vegan takes on foie gras, Cornish crudo doused in heady XO sauce, and trademark corn ribs. Dairy cow rump, Middle White pork, leeks with pressed Bermondsey cheese, and – the clear victor – fallow deer all come adorned with top-tier takes on the standard trimmings. 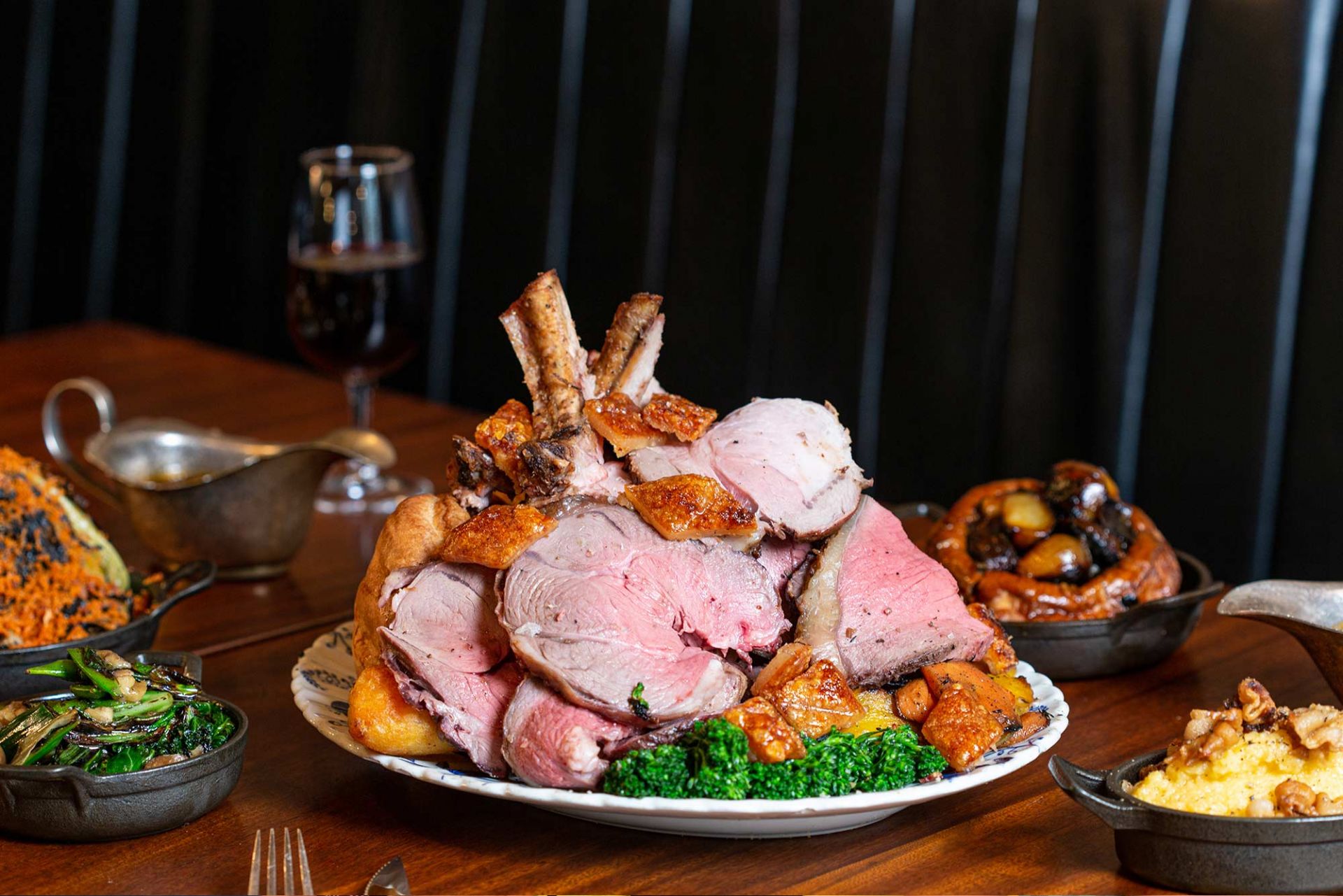 A mound of meats at Blacklock / Image: Rebecca Hope

This vibey Soho basement is meat-focused all week long, but really comes into its own on Sundays. Kick things off with pig's head on toast or cull yaw crumpet, before moving onto 55-day aged beef rump, 28-day aged lamb leg or 21-day aged pork loin plus all the traditional trimmings. Can’t choose? There’s an ‘all in’ option that means you don’t have to. Vegetarians are also very well catered for, with a whole celeriac slow-roasted over coals, or cauliflower and four cheeses. 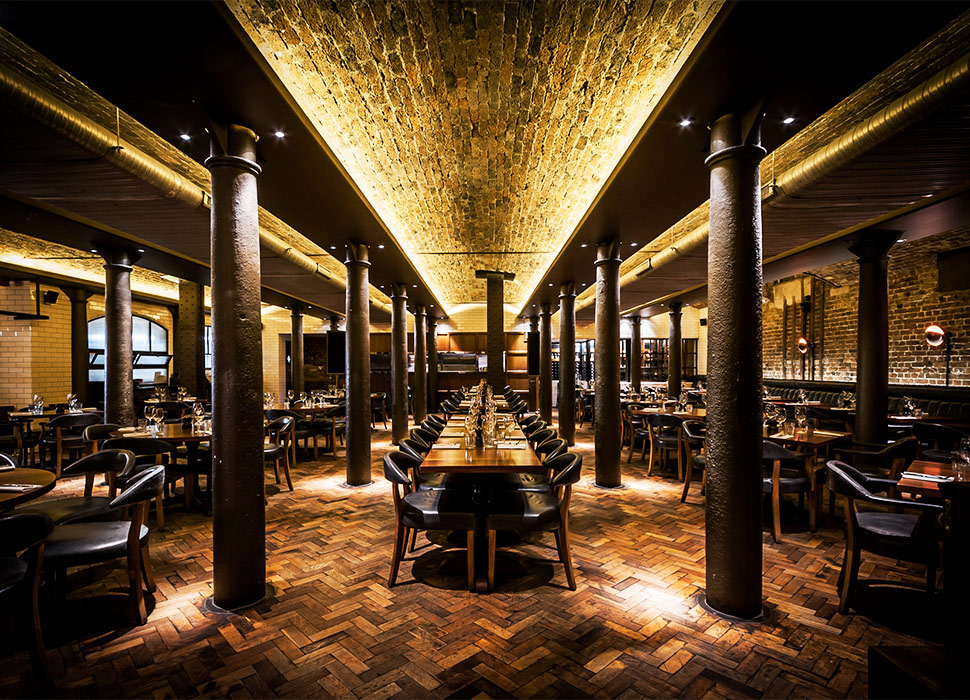 Think meat, think Hawksmoor. This family of opulent London steakhouses – this one’s in the former Watney-Combe brewery ​​in Covent Garden – have roasts down to a fine art, and the service is always spot on too. A superlative slab of beef rump is served with beef-dripping roast potatoes, Yorkshire puddings, carrots, greens, garlicky roasted shallots and plenty of bone marrow and onion gravy. Strong cocktails (their off-menu 'corpse reviver no. 4' is truly, er, killer) and proper puddings, of the sticky toffee kind, are a speciality. 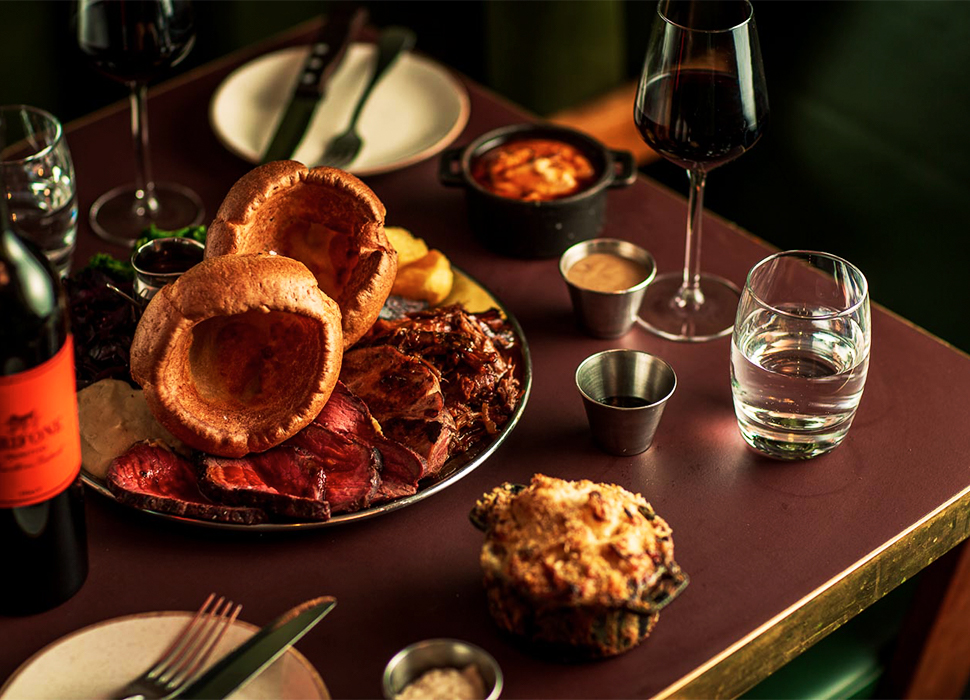 Three's the magic number at Temper

Temper's had a funny old ride. Starting as a Neil Rankin-helmed, subterranean temple to head-razing laabs and punchy stuff on tacos, it's now mellowed into a more approachable and evergreen micro-chain. It's still wholly dedicated to pleasures of the flesh, though – and a wicked, 'three-beast' family-style roast of aged beef, smoked pork and roast lamb is a fine example of the approach. Conventional Sunday lunching this not, though; fail, at your peril, to complement the regular trimmings with a side of cheeseburger tacos, or burrata with lime and jalapaño. 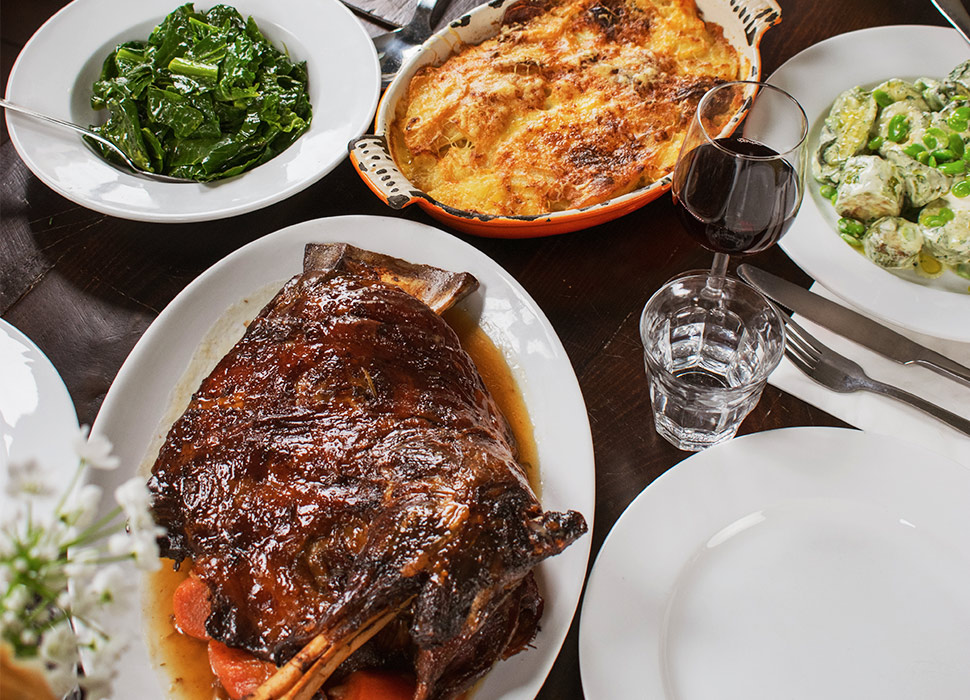 This recently smartened-up north London watering hole with a lovely garden excels itself when it comes to dining – and the Sunday roasts are the jewel in its crown. Choose from confit duck with boudin noir, roast shallots and damsons, short rib of beef and tarragon mustard cream, a shareable chicken, leek and bacon pie, or a two-person serving of slow-cooked lamb, crispy potatoes and Greek salad. They’re all bookended by creative starters (grilled corn on the cob with ‘nduja butter, say, or hazelnuts, burrata and spiced rainbow chard) and deceptively simple puddings like chocolate pot and raspberries, or peach crumble and custard.

The Princess of Shoreditch 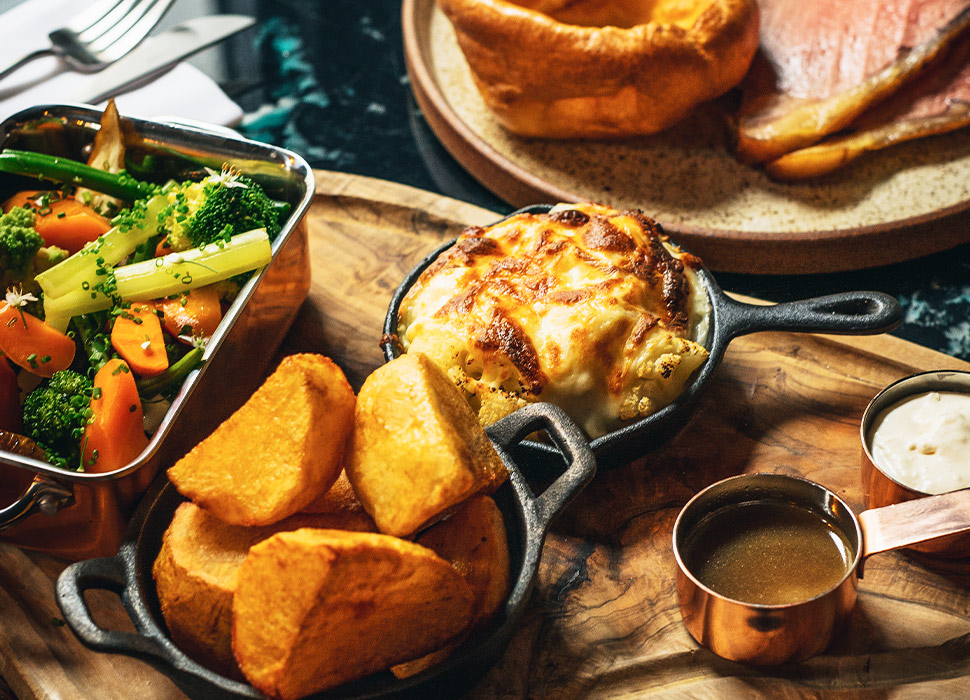 Its good looks feel almost Dickensian, but there’s nothing backward-facing about the menu at this upmarket gastropub a stone’s throw from Old Street. On Sundays there’s a three-course menu, the stars of which are Norfolk Black chicken with sourdough bread sauce, Yorkshire Dales sirloin of beef and salt-aged pork belly with apple sauce. There's also a superb salt-baked swede with yeast and maple glaze for vegetarians. Everything comes with all the trimmings, but don’t skip the Keen’s cheddar cauliflower cheese, to which you can add a generous serving of black truffle for a small supplement. Continuing on the theme, British cheeses with malt loaf and pickles make a delicious conclusion. 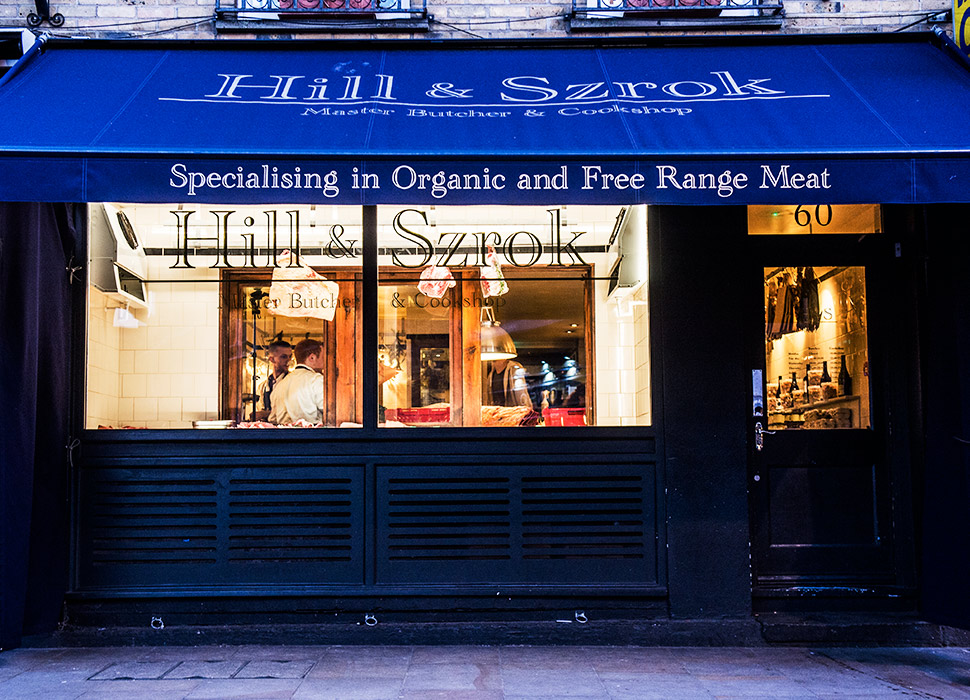 Take a butchers at this swell spot

Where better to sit down to a superb roast than a butcher’s shop? By night this Broadway Market institution turns into an intimate restaurant with a ‘small herd, whole carcass’ ethos and a daily changing menu of cuts from the butchery. There might be pork chops, chicken supremes, lamb rump or a selection of steaks all the way up to a 1kg T-bones, served with pink fir potatoes and grilled hispi cabbage with burnt apple. There’s an excellent wine list too, with plenty of funky low-intervention options. 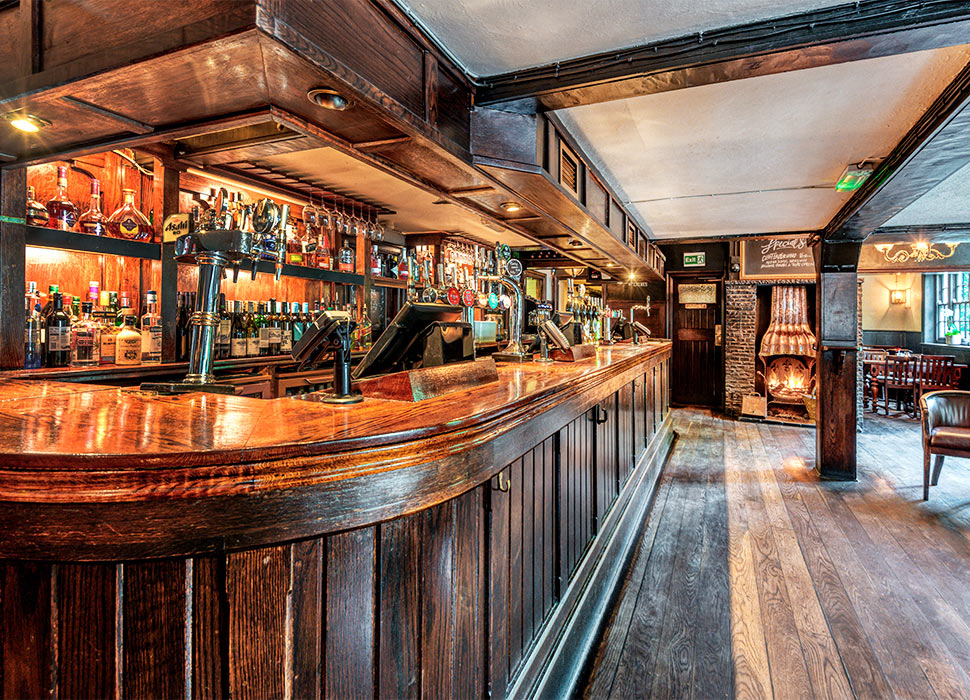 This Europhile classic is one of the cosiest pubs in London / Image: The Spaniards Inn

After a bracing stomp around Hampstead Heath, head for this iconic pub on its northern edge, not far from Kenwood House. Cosy and wood-panelled, it’s a wonderful spot to settle into for the rest of the afternoon in winter, and there's a large terrace for summer dining. If there are a few of you, order the trio of roasts to share: a feast of 21-day aged rib of beef, chicken and roast pork belly accompanied by pigs in blankets, Yorkshire puddings, ruffled thyme roasted potatoes, seasonal vegetables, gingerbread stuffing and red wine jus. As you’d expect, the selection of craft beer and cask ales here is first-rate too. 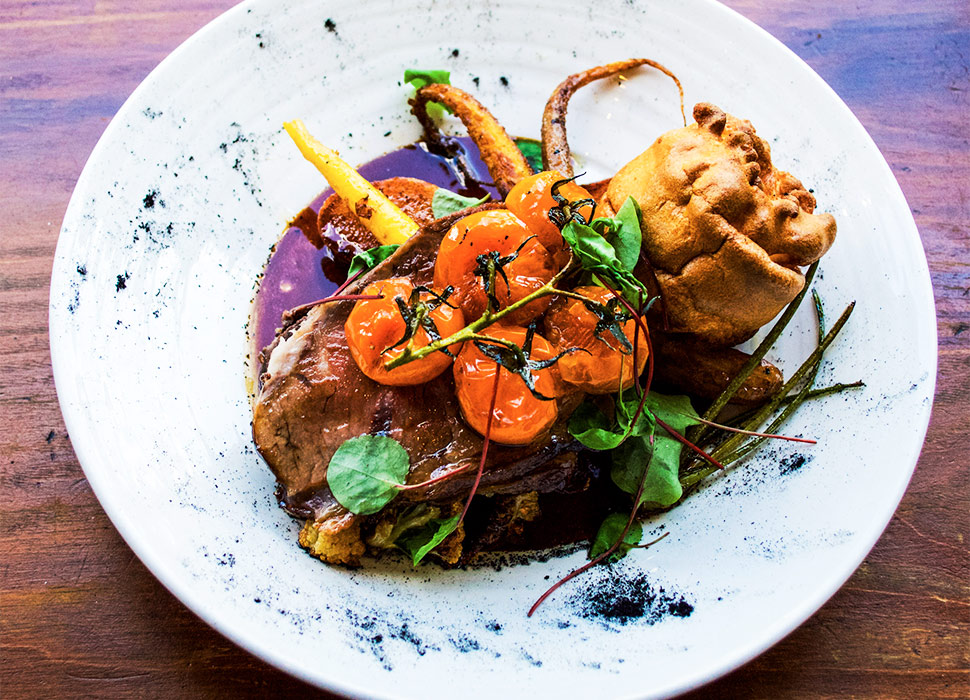 Family-reared meats are the rage at this Chelsea favourite

Billed as ‘Sundays on the farm’, the roasts at this rustically styled Chelsea favourite are seriously generous and beautifully cooked. The meat is all sustainably sourced from the owners’ Sussex holding: think succulent sirloin and confit lamb shoulder. Then there’s Yorkshire puddings, seasonal vegetables, Bloody Marys, an all-British cheeseboard, chocolate torte… you get the idea. There’s also an excellent roasted celeriac option for vegetarians, and plenty of nibbles to start – anyone for a mini Marmite éclair? 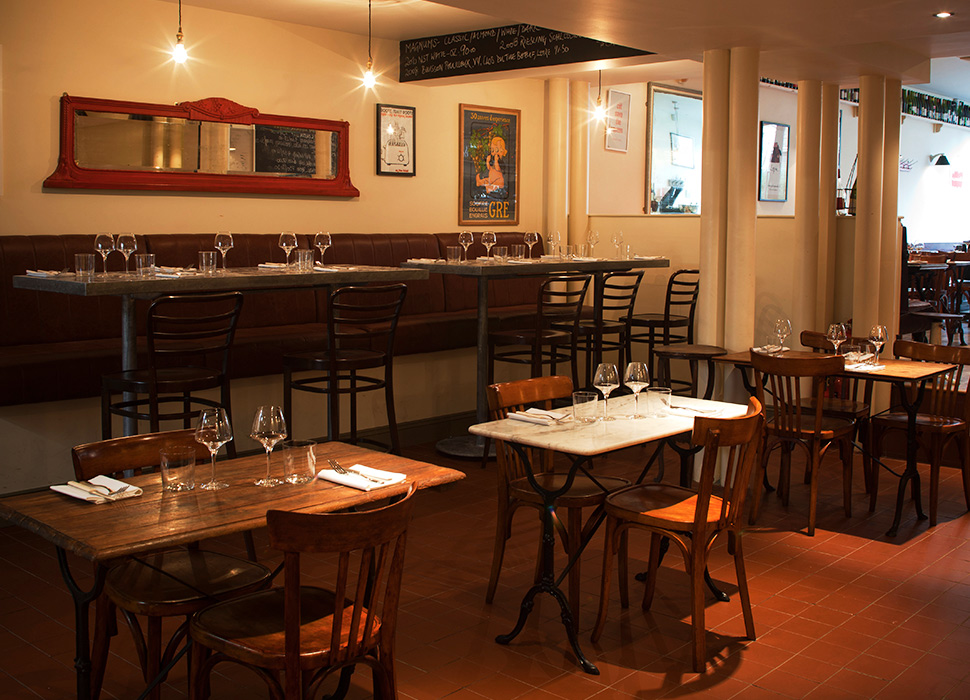 As its name suggests, the Sunday roast at this Battersea bistro-slash-wine bar is a French-accented affair. After a charcuterie board or Carlingford oysters, move onto Creedy Carver duck with duck-fat potatoes, lamb rump with sauce soubise or a whole rotisserie chicken with chips, salad and aioli to share. There’s a strong cheese selection (naturellement), and pint-sized diners are well catered for too.

It’s a true south London legend, but The Camberwell Arms is well worth travelling to from wherever you are in the city – especially at the weekend. Sunday lunch is designed to be shared, with feasting-style platters arriving at the table: spit-roasted chicken with green chilli schmaltz yoghurt, slow-cooked beef osso bucco, overnight braised lamb and grilled Hereford rump steak with anchovy and rosemary butter. The sides – sage and lemon roasties, butterhead lettuce with ricotta salata and apricot vinaigrette, roasted piattone beans with bull's heart tomatoes etc etc  – are spectacular too. And for dessert, try the elderflower rum baba with gooseberry fool.