The English capital is one of the finest places to eat on the planet – but so much choice can be overwhelming. From neighbourhood bistros to city-centre treats, here's your culinary itinerary

Great food abounds in this town, but you'll need a base to aim from – so which London neighbourhood is best for your city-break?

And when you're stuffed full to pop, walk it off in one of these five flourishing wildernesses.

It’s got a simple name, a simple look and a simple concept – daily-changing menu, modern European small plates, nice wine – but as everyone knows, the simple things are the hardest to do well. Since opening in 2012 it’s been a fixture on London’s ‘best restaurant’ lists and represents all that’s fun about eating out in Soho, with its buzzy atmosphere, jolly staff and adventurous, seasonal food. Example: pickled sardine with fennel and clementine; sea bream with crab, raisins and olives; a good British cheese and a carafe of something punchy. Yes please. 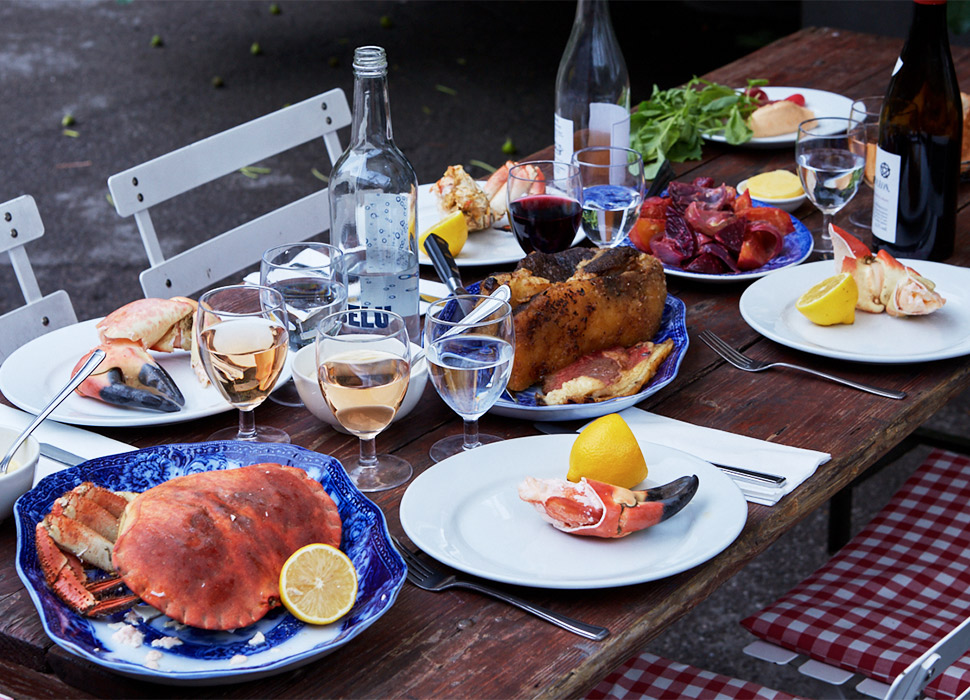 If you’re a visitor to the city, here’s the under-the-radar, hidden-away place to impress even Londoners. Behind a big wall in a housing a state on the Shoreditch backstreets, this delightful little place is housed in a former schoolhouse (and tables spill into the sunny playground in the warm months). Go for no-nonsense, grown-up dishes with a focus on fine ingredients at lunch and dinner: you might have duck rillettes with cornichons, say, or grilled onglet steak with beetroot and horseradish, or Eccles cake and Lancashire cheese, and it will all be wonderful. 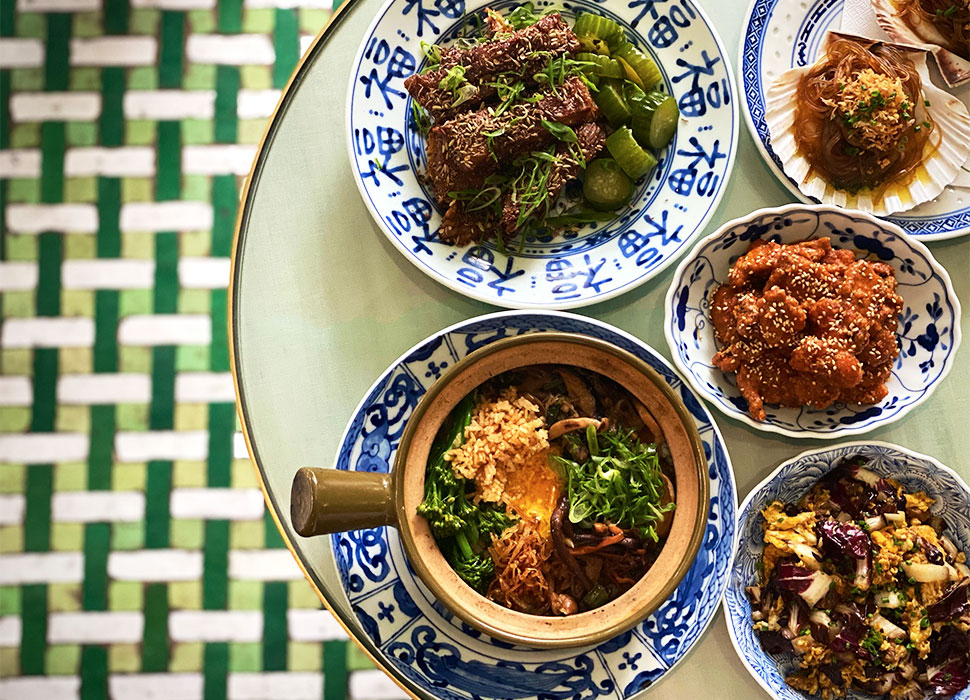 Sat in a plum position on the corner of Soho's Greek and Old Compton Streets, this ravishing Cantonese spot is one of London's most perplexingly underrated. For a start, it looks absolutely knockout: the dinky street-side space, with its Wes Anderson-ready 'Tea Station', is all distressed, duck-egg plaster, leathery banquettes and retro rattan café chairs; while downstairs things are more loungey, awash in moody green neon. Snazzy AF, but the food is even better. Sea scallops with wild garlic butter and glass noodles? Melting Iberico char siu pork? Wok greens flecked with garlic and doused in fermented bean sauce? All astounding, and even better sloshed back with a sweet/saline rice wine martini. Absolutely Wun of the best. 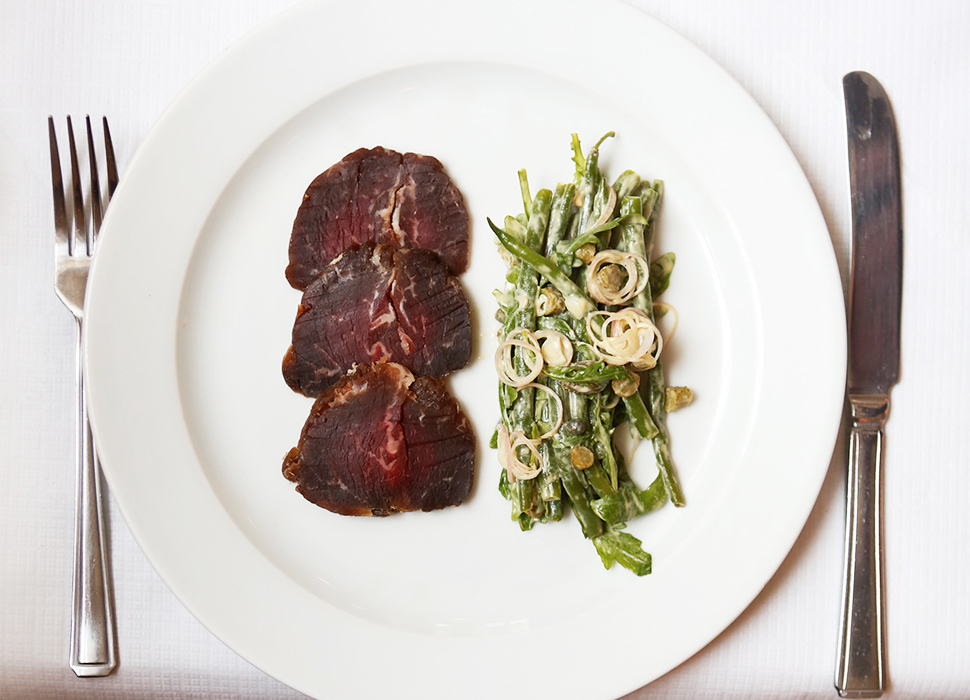 The original nose-to-tail maestros, charismatic founders Fergus Henderson and Trevor Gulliver have been serving some of the most superb British grub in the city since opening their first restaurant in 1994. Celebrating all parts of the animal, the dishes are so simple, comforting and damn delicious that they’ve become icons in their own right: roast bone marrow and toast, pig’s head pie, Welsh rarebit, Eccles cakes with slabs of cheddar and baked-to-order fluffy madeleines. The menu differs slightly at the two St John restaurants: Smithfield is a bit more formal (it has a Michelin star) while Bread & Wine in Spitalfields is a casual with smaller plates, but both are a treat. Be sure to visit the bakeries in London Bridge or Covent Garden to try the famous doughnuts too. 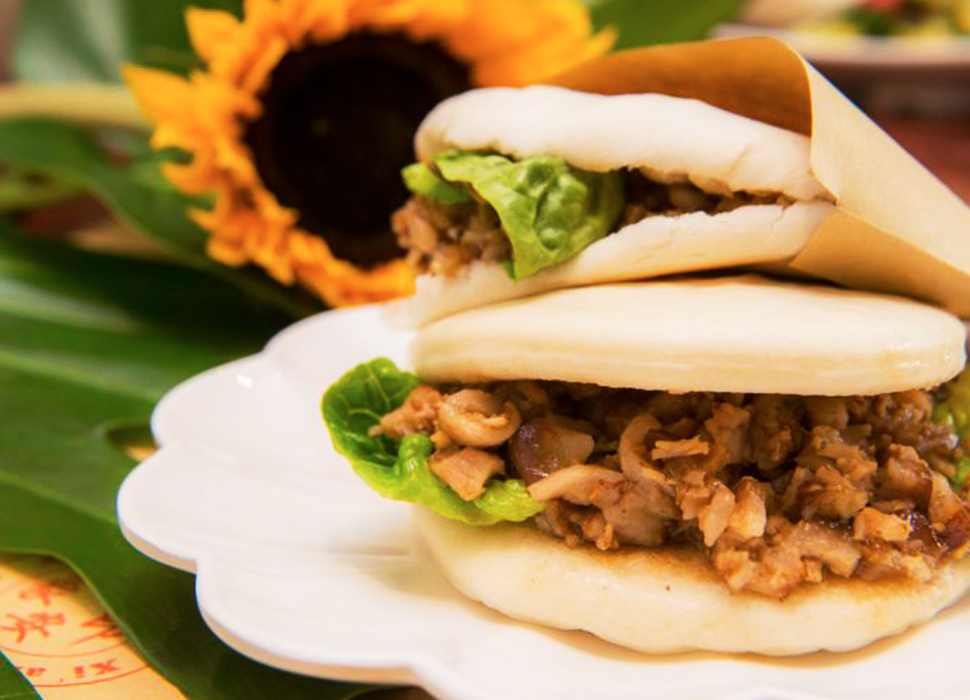 Food from China’s Shaanxi province is criminally hard to find in London. So this little canteen in the shadow of the massive Arsenal football stadium, which specialises in tongue-tingling dishes from the city of Xi’an, is a welcome diversion from the usual Cantonese menus you’ll find peppered all over the city. What you’re coming for is the noodles – flat, springy, and slightly chewy, the hand-pulled biang biang make the perfect vehicle for the mouth-numbing chili sauce. But don’t leave without trying the beef or pork ‘burgers’: kebab-like shaved meat served between toasty buns slathered with a ludicrously delicious ‘secret’ special sauce. 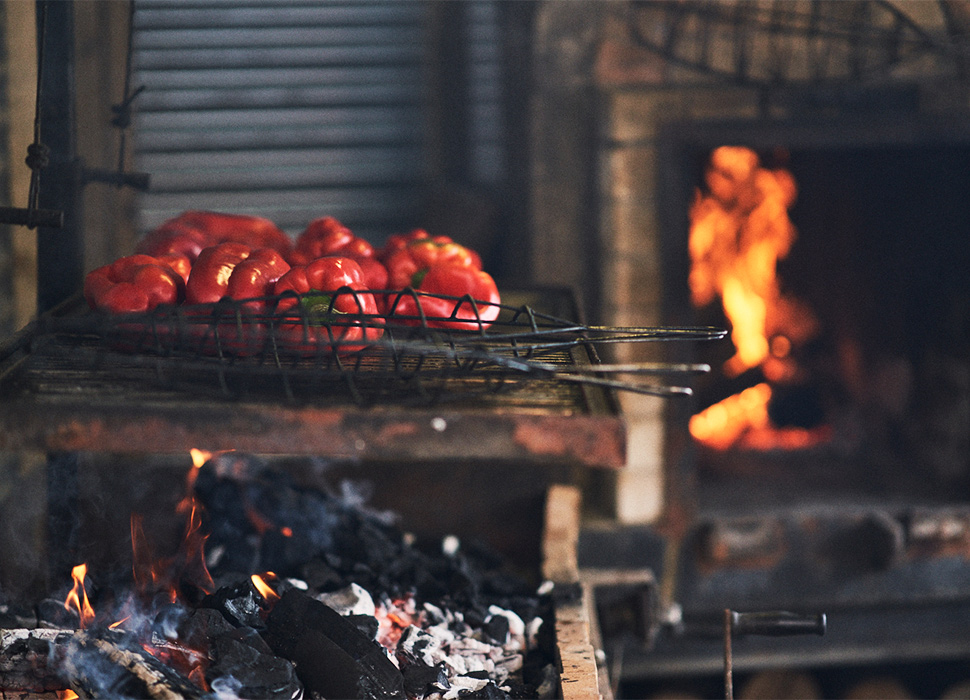 A restaurant to get fired up about

The original Shoreditch Brat is a Michelin-starred, Basque-inspired, firm London foodie favourite. But there’s something even more thrilling about its pop-up-turned-permanent spot just off London Fields. It's taken over the front yard outside local coffee roastery Climpson’s, and its impressive open kitchen full of fire and fun churns out next level roasted meat and fish – get the turbot or whole crab if they’re on the seasonally changing menu, accompanied by the smoked potatoes, young leeks with fresh cheese and the legendary Basque burnt cheesecake. The wine list is also on point; book an early slot and make a night of it.

The Pig and Butcher 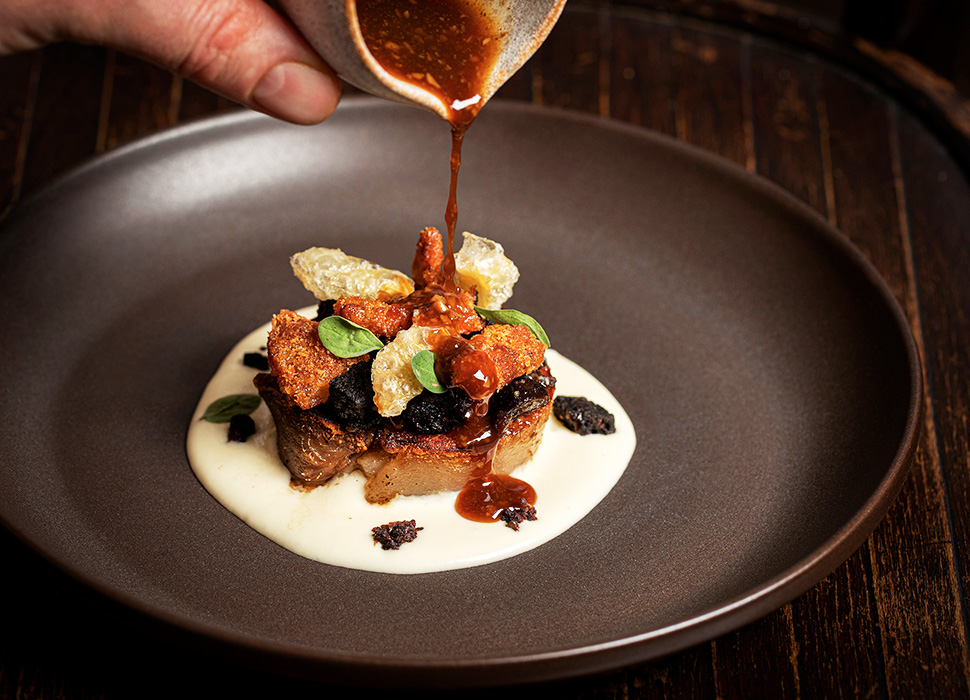 Every town needs a top-tier gastropub, and London (by way of the Bull & Last, the Drapers Arms, The Baring, the Guinea Grill, et al), is overrun. But they don't come better than Islington's Pig and Butcher. Now a decade in (and counting), this clattering, wood-panelled gem strikes a fine line between rarefied and rustic, with a menu that kicks off with textbook scotch eggs (flecked with black pudding) and battered oysters, before swerving skyward via plates like pig's head with gooseberry, summer truffle, black pudding and hazelnuts, or Cornish skate wing, grilled gem lettuce, radish, tropea onions and smoked crustacean butter. The convivial vibes are further fuelled by an excellent drinks list, which offers pan-global wines and neatly curated craft beers by the trough-load. 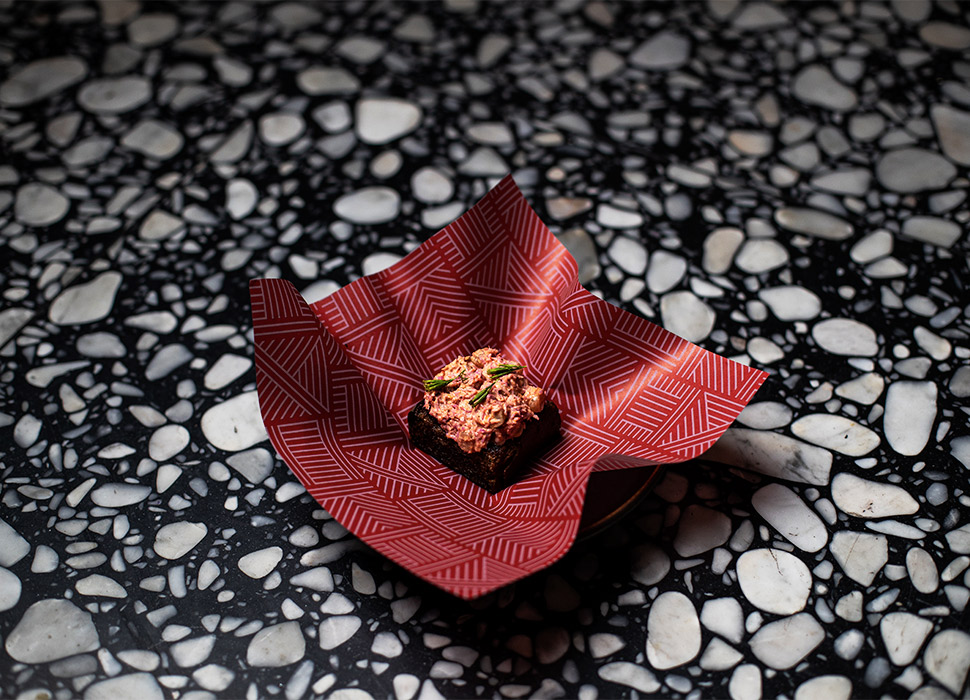 Chef Jeremy Chan’s central London restaurant is often wrongly labelled a West African fine-diner. Rather, Chan draws on ingredients and spices traditionally used in the region to create singular dishes with an identity all his own. Take the plantain dish that frequently opens a meal here – dusted with luridly ruby-coloured dehydrated raspberry powder and served with a smoked scotch bonnet sauces, it may be gently inspired by Nigerian dambu namba (dried beef floss), but its final form is unmistakably Chan. The rest of the 11-serving tasting menu is a heady trip into the chef’s obsessive mind, which, like a Cubist painter's, deconstructs notions of deliciousness and cobbles them back together into something splendid and new. Pricey, but worth it. 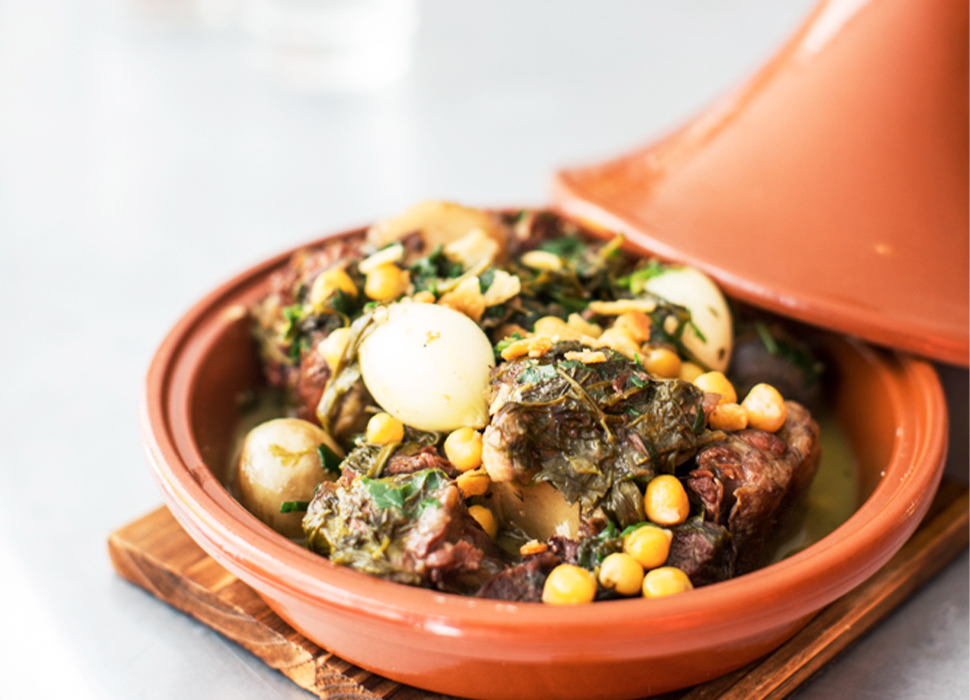 The warmth of the attentive, energetic staff at this Israeli favourite is matched only by the swelter coming from its fiery open kitchen. If you take a perch at the bar — which we recommend, for a close-up view of the cyclonic cooking – you’re almost certain to get a shvitz on. But the heat is all part of the Palomar’s delightful chaos. And once a plate of tender, smoky goat’s cheese-beetroot carpaccio is set down in front of you, you’re having as much fun as the singing and dancing staff – all that’s left to do is dig into bright, veg-led dishes and try not to get so tipsy with joy that you fall off your stool. 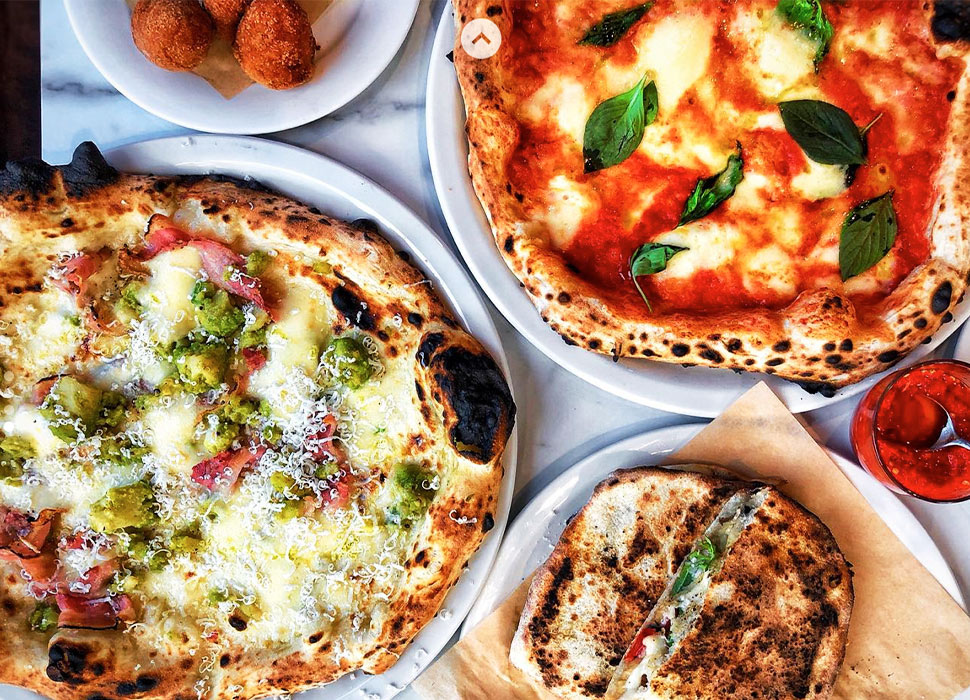 Get an eyeful of these pies

London is a city blessed with superlative pizza joints (take a bow Homeslice, Santa Maria, Made of Dough et al) but the pick of the pies can be found at Theo’s – a south London institution slinging out puffy sourdough, heady cocktails and one of the best tiramisus in town. It has two branches, each offering slightly different menus: make for the OG Camberwell site to wolf stupendous, Neapolitan-style pizza fritti stuffed with ricotta and pork belly, and to the less-charmingly situated but arguably better Elephant & Castle branch, where you’ll find short-run specials like garlic mushroom and ricotta or white carbonara pizzas among the old standards. 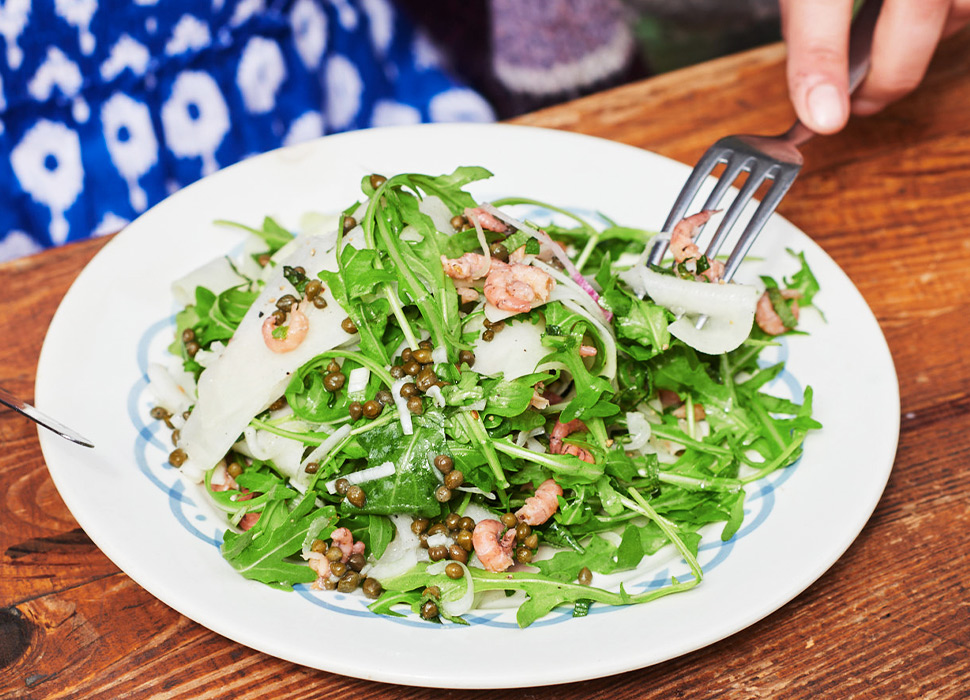 Located in an open-air unit on the side of the Regent’s Canal between Haggerston and De Beauvoir Town, Lori de Mori and Laura Jackson’s Towpath Café is one of London’s most underrated haunts, reverently whispered about by London’s epicurean community. It was once a purely seasonal spot, but they’ve now extended their opening months. It’s worth braving an alfresco table even in inclement weather because the food is ridiculously good: think lamb meatballs with rose harissa and yoghurt, grilled cheese sarnies with quince, sage butter fried eggs and mojo verde, and other understatedly irresistible dishes of that ilk. 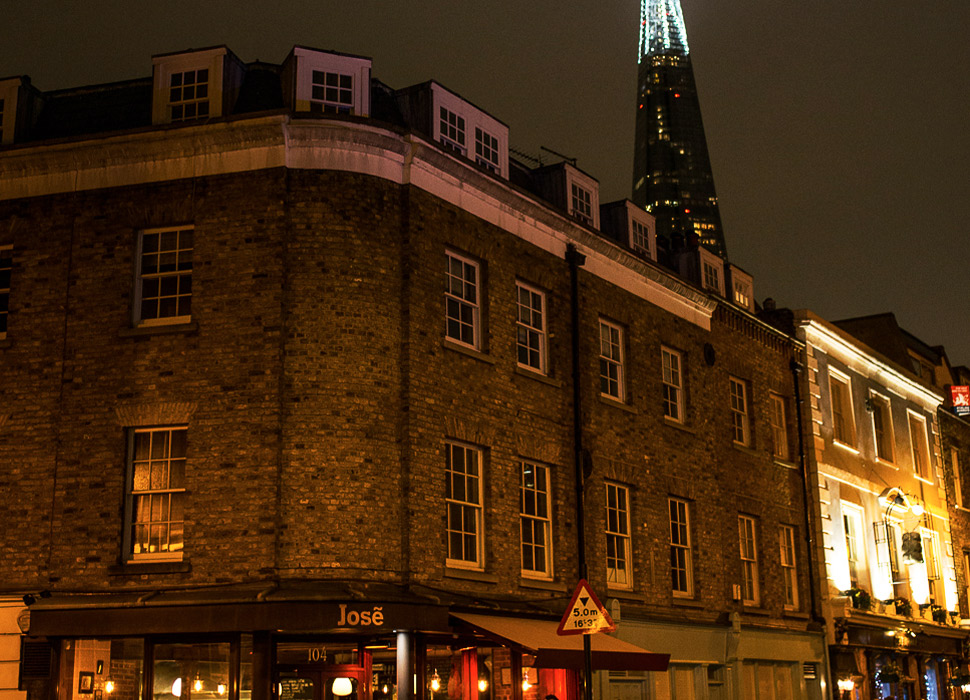 A jolly place to find on a dark night

The man behind the name is José Pizarro, the Spanish chef who’s done more to bring the genuine sunny flavours of Iberia to rainy old London. Here in Bermondsey, his restaurant is the kind of place you’d stumble upon in a Seville backstreet and end up staying all night: stools are arranged around barrel tables, although most people stand to sip a choice of 50 wines or chilled sherries and nibble the best croquetas, jamon, padron peppers and mackerel en escabeche that you can have without a flight to Spain. 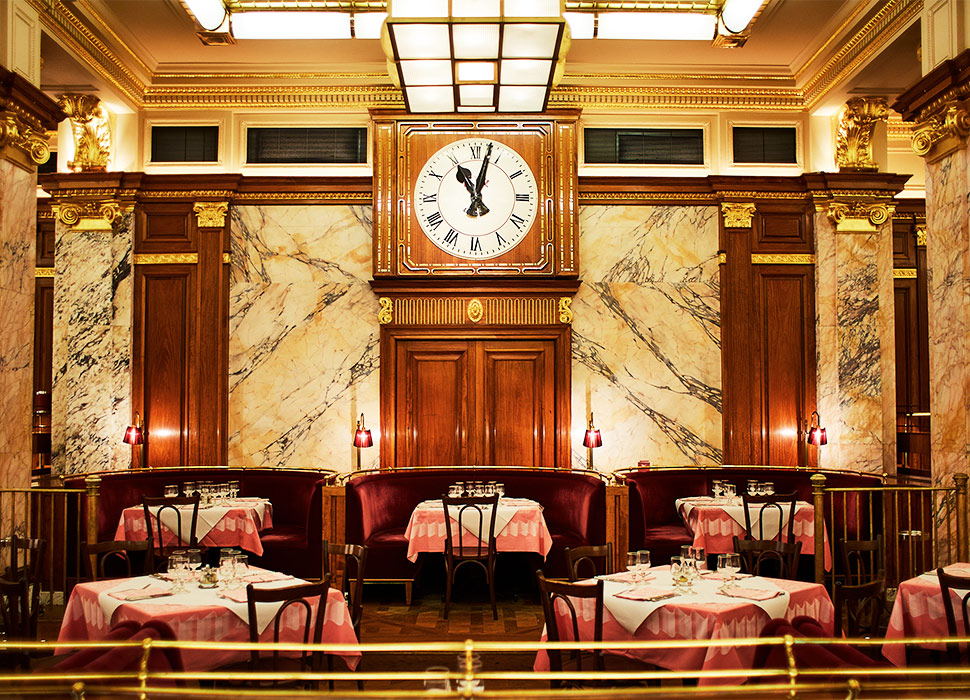 Fancy eating in a cavernous subterranean dining room eerily reminiscent of the ballroom from The Shining? Course you do – and that’s exactly what this Gallic gem from restaurateurs Corbin & King (the guys behind the Wolseley and the Delauney, among other neoclassic grand cafés) offers. It’s a magical space, made vibier with the background tooting of its in-house jazz band, with a classic French menu featuring the best prix fixe in town: carottes râpées, a truly excellent steak haché and frites, and chocolate tart for a measly £14.25. Spend everything you’ve saved on knockout cocktails at the gorgeous art deco Bar Americain next door. Chin chin. 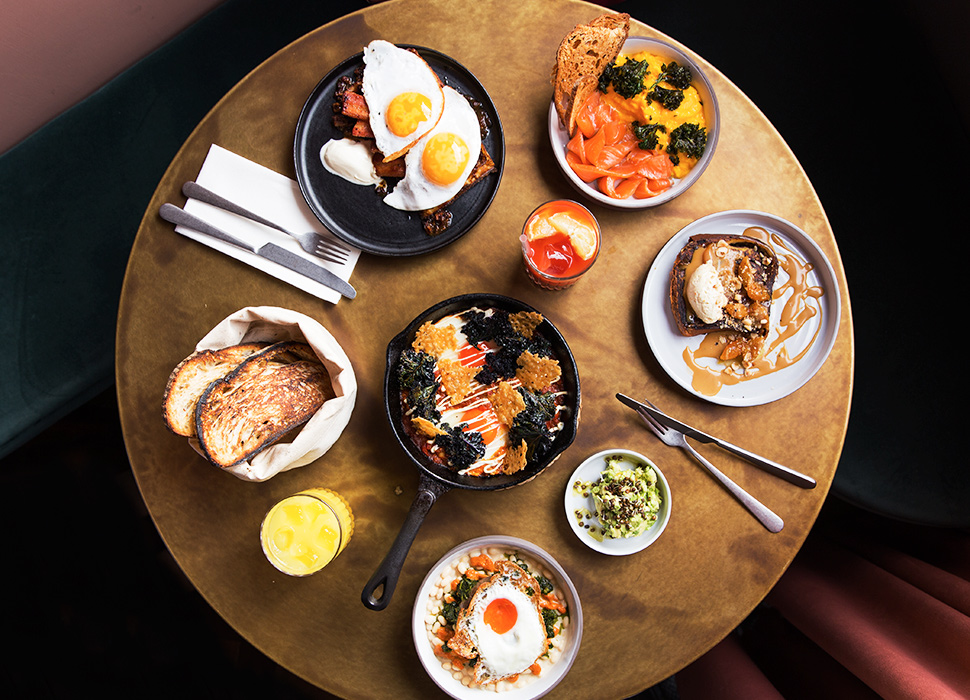 Queen’s Road Peckham is the dingier late-bloomer to the enclaves around Rye Lane and Bellenden Road – but the jewel in its burnished crown is this fab South-African-cum-modern-Euro mishmash of a restaurant. The pretty space – all blushing pastels and velvet banquettes, attracting a weirdly Sloaney crowd for this part of town – is merely a vessel for the smallish plates, which are truly ace. Only a lunatic would leave without snaffling the skillet of briochey bread with bacon butter, skewers of peri peri duck hearts with dukkah, parmesan churros, or charred onglet steak with pickled enoki ‘shrooms and truffled potato mousse. Don’t be that lunatic.

It’s not hard to find a decent bowl of pasta in London these days, but for the ultimate ‘how is this so much better than the stuff I make at home’ experience, Padella is the one to beat. From day one, the original Borough Market site had snaking queues of carb fans, patiently waiting for that steaming plate of cacio e pepe (cheese and pepper has never tasted so good). The menu is short and sweet and dishes are small enough so you can get a few to try – whatever you choose, make sure the ragu is on the list. The newer Shoreditch site is just as popular but thankfully you can book. Negronis all round!

At least 90 percent of Indian restaurants in London are of the high-street-curry-house, two-more-lamb-bhuna variety – but down in Tooting, the sizeable south Indian community means it’s home to more interesting and authentic places to eat. It’s no-frills all the way: wipe-clean menus, metal cups for water, rows of caff tables, but the food is brilliant, running from traditional fried snacks like vada and idly to the thinnest, crispiest dosai (lentil pancakes) in town. Be warned, the spice levels are not tempered for Western wimps.

Stepping through the noren-shrouded entrance to this centrally placed noodle bar evokes misty, secretive side streets in Tokyo (whether you’ve been to the motherland of udon or not). It’s fun to pretend you’re in Roppongi rather than Soho, and even funner to slurp those thick, slinky noodles from a bowl of glass-clear broth. The real heads know, though, that Koya’s perfect udon is best eaten unsoggy, served without soup and some dipping sauce on the side. The crisp, airy tempura makes a natural pal to the soft and chewy noodles. Koya also has a sister restaurant in the City, but the Soho one trumps it every time for atmosphere and quality control.