The most exciting new restaurant openings in London

The capital is open again – and that means wave-upon-wave of rad new restaurant openings, as per the 'before days'. Here are the most feted and fab-looking new joints across London

In a city as gastronomically thrumming as London, it can be hard to keep up with the relentless onslaught of new restaurant openings (and who wants to miss the zeitgeist, eh?). But now you don't have to, because we've already done it. We've rated the just opened, the imminent arrivals and the special recent spots that have slipped under the radar – chow down on our guide to the best new eateries in town.

When you're done with the fresh stuff, why not plough through the actual best restaurants in London?

Then see the evening in with a cocktail or two at London's best terraces for summer drinks. 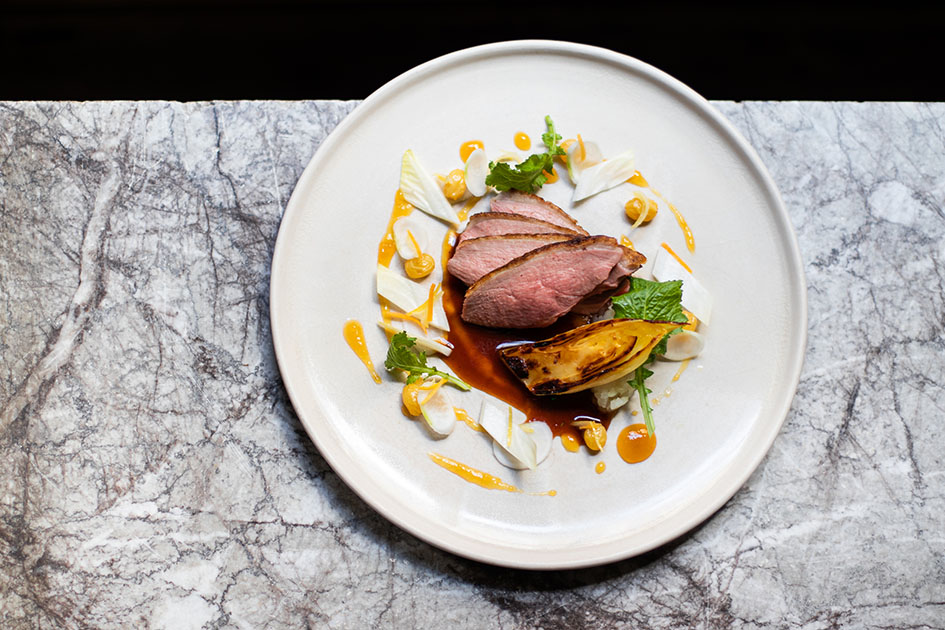 What is it? An is Anglo-Franco-Japanese mash-up from the folks what brought you Palomar and The Barbary

What's the lowdown?
A hyper-intimate, 10-seater bolthole in the basement of The Blue Posts on Soho's Rupert Street, Evelyn's Table has been open for a while, but the kitchen has recently been re-launched by Luke, Nat and Theo Selby – a cohort of chef brothers who've worked at Le Manoir aux Quat-Saisons in Oxfordshire, and Ollie Dabbous' Hide, among other fancypants spots. Lo: British ingredients are treated with Japanese-style care (a hangover of Luke's time at Tokyo's Restaurant Nihonryori Ryugin), manifesting in dishes like mackerel with plum umeboshi and shiso, or tarte tatin with miso – all nicely sloshed back with natural wines paired by sweetly-named sommelier Honey Spencer. 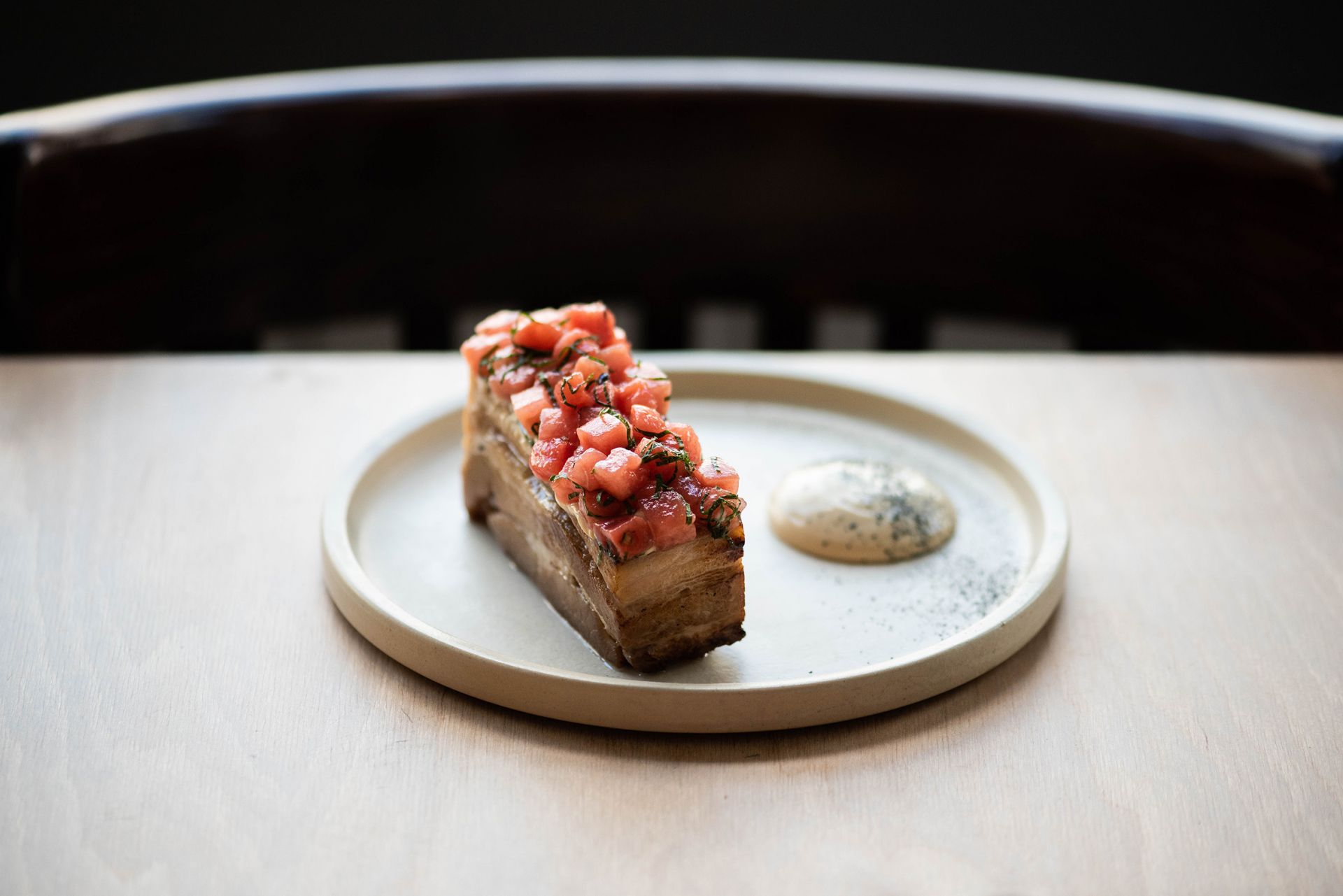 Cured pork belly with kisaichi pickled watermelon and smoked tofu, can you EVEN?? / Image: Goya Comms

What is it?
A 'modern warehouse restaurant' and wine bar with a minimal-waste remit.

And what's the lowdown?
This slick new joint is the brainchild of restaurateur Anthony Lyan (of Crouch End's 'nose-to-fin' Lyan's Seafood & Wine Bar) and sommelier Kelvin McCabe (a 'Kikisake-Shi master of sake' among other things). It's a pretty broad remit – the industrial-chic space will also host evening DJs, a downstairs events space and a dedicated wine shop and deli – but it's all led by a knockout-sounding menu of hyper-seasonal dishes and wine from small-scale producers. Expect such gems as pig head croquettes with baby shrimp and rhubarb sriracha, or kombucha-glazed pumpkin with Graceburn cheese and freekeh across the frequently changing menu (all headed up by a chef late of Scully's and Hide). 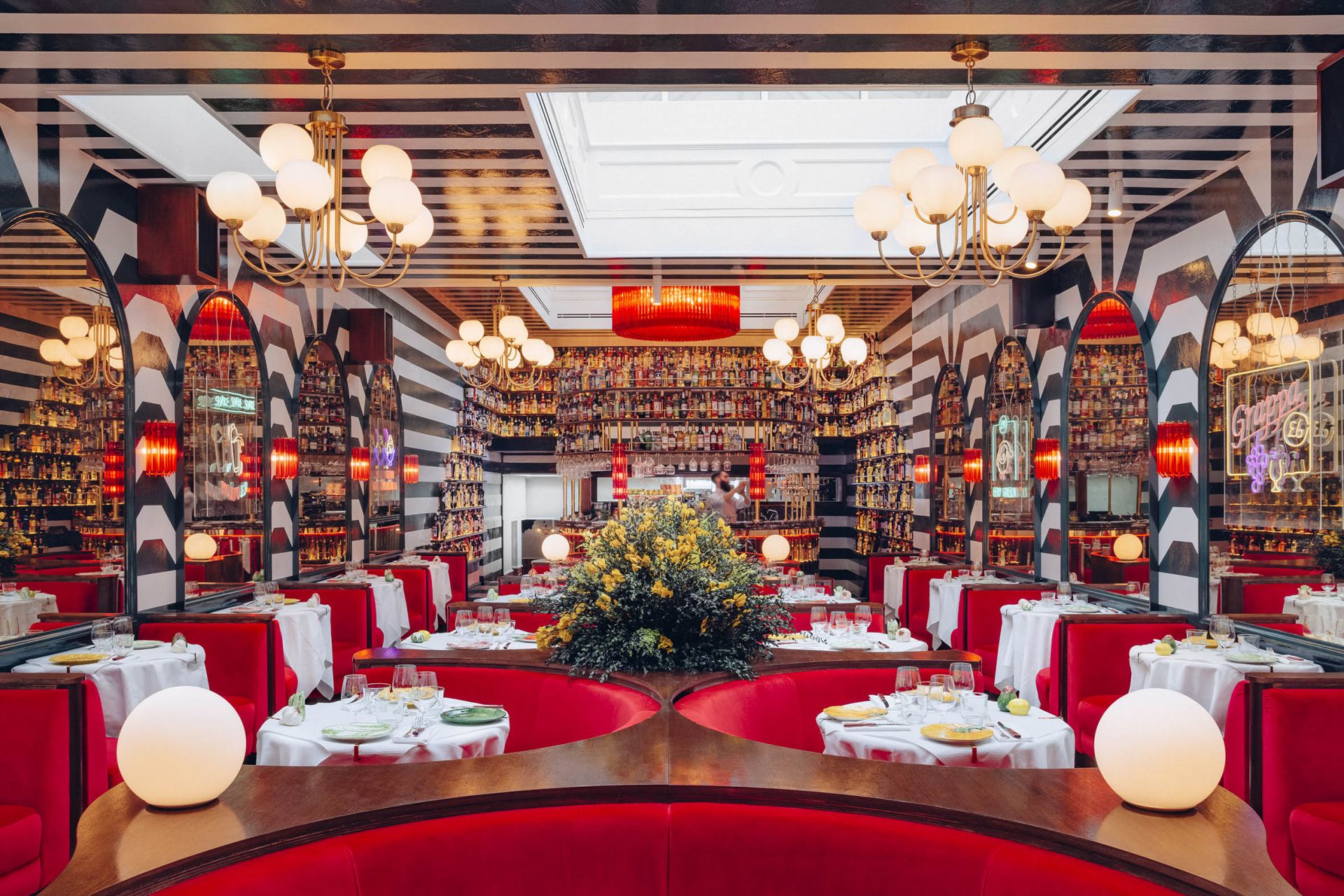 What is it?
An utterly bonkers, Florence-inspired trattoria from the rascals at Big Mamma.

What's the lowdown?
After the rip-roaring success of Gloria, Circolo Popolare and Napoli Gang, French restaurant group Big Mamma is consolidating its empire with a 295-seater shrine to Italian excess in the heart of Covent Garden. The decor is, as you’d expect, totally OTT: Beetlejuice-striped walls, velvet mafioso booths, and a refulgent central bar presided over by a 3,500-strong bottle wall. Dishes are similarly flamboyant, with an epic, multi-header menu of manically made-over northern Italian classics – like the overspilling ‘sideways’ lasagne. Dessert? A 60cm-high stracciatella cake, of course. 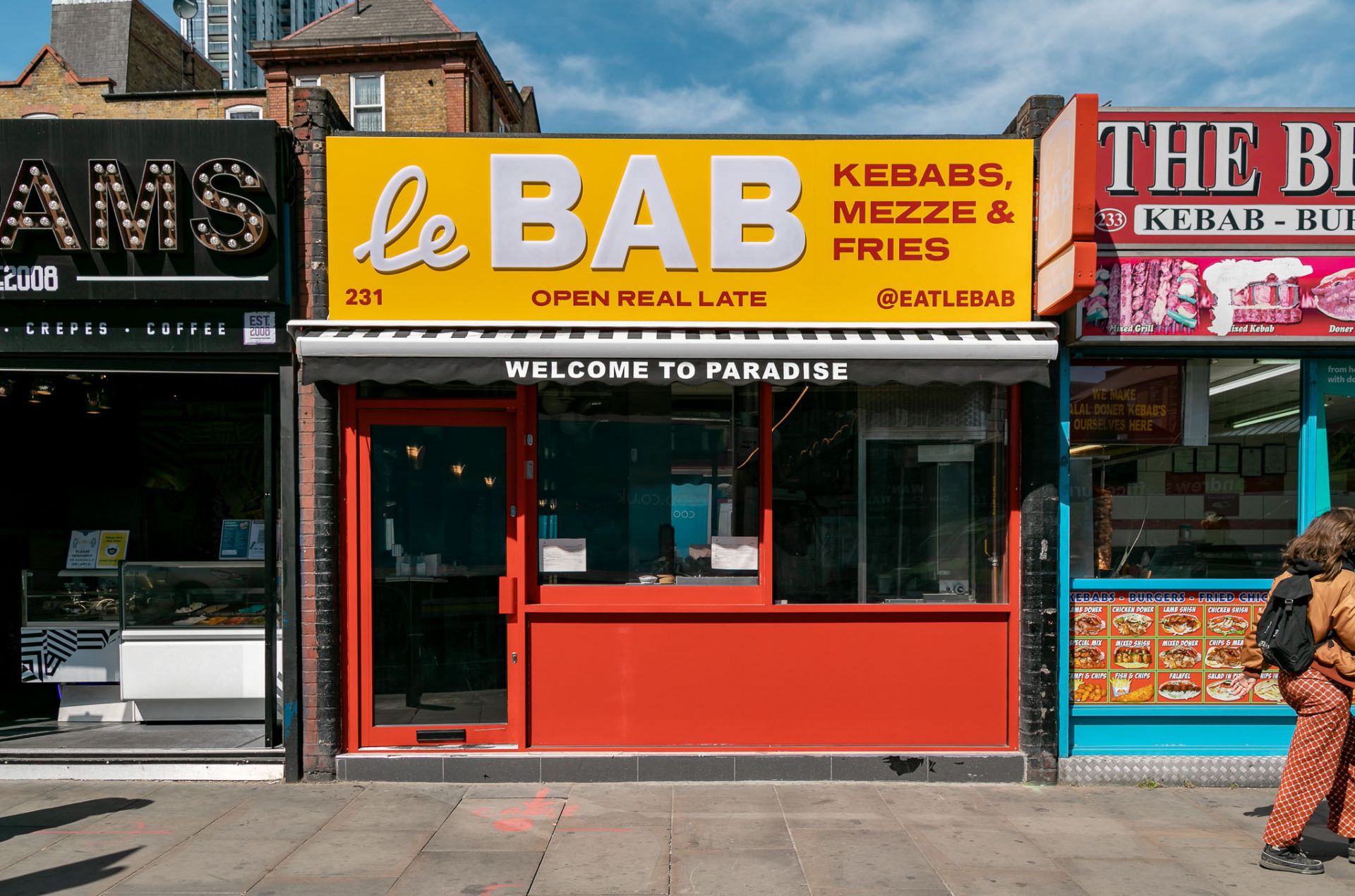 What is it?
A bougie late-night kebab shop near Old Street roundabout.

And what's the lowdown?
Sure, it might look like a garden-variety nocturnal takeaway, but no. Being the newest offshoot of the Le Bab microchain, this is more rarefied stuff: a teeny-tiny, hot-pink-and-brushed-steel Levantine-adjacent resto doing elevated takes on the classics – a pork rib-eye shwarma with chermoula mayo, say, or a sabich pitta with peanut mayo. There are more outré bits, like a British soppressata and mozarella shwarma or an Indian-inspired beef madras adana. The booze food of your (beer-addled) dreams, then. 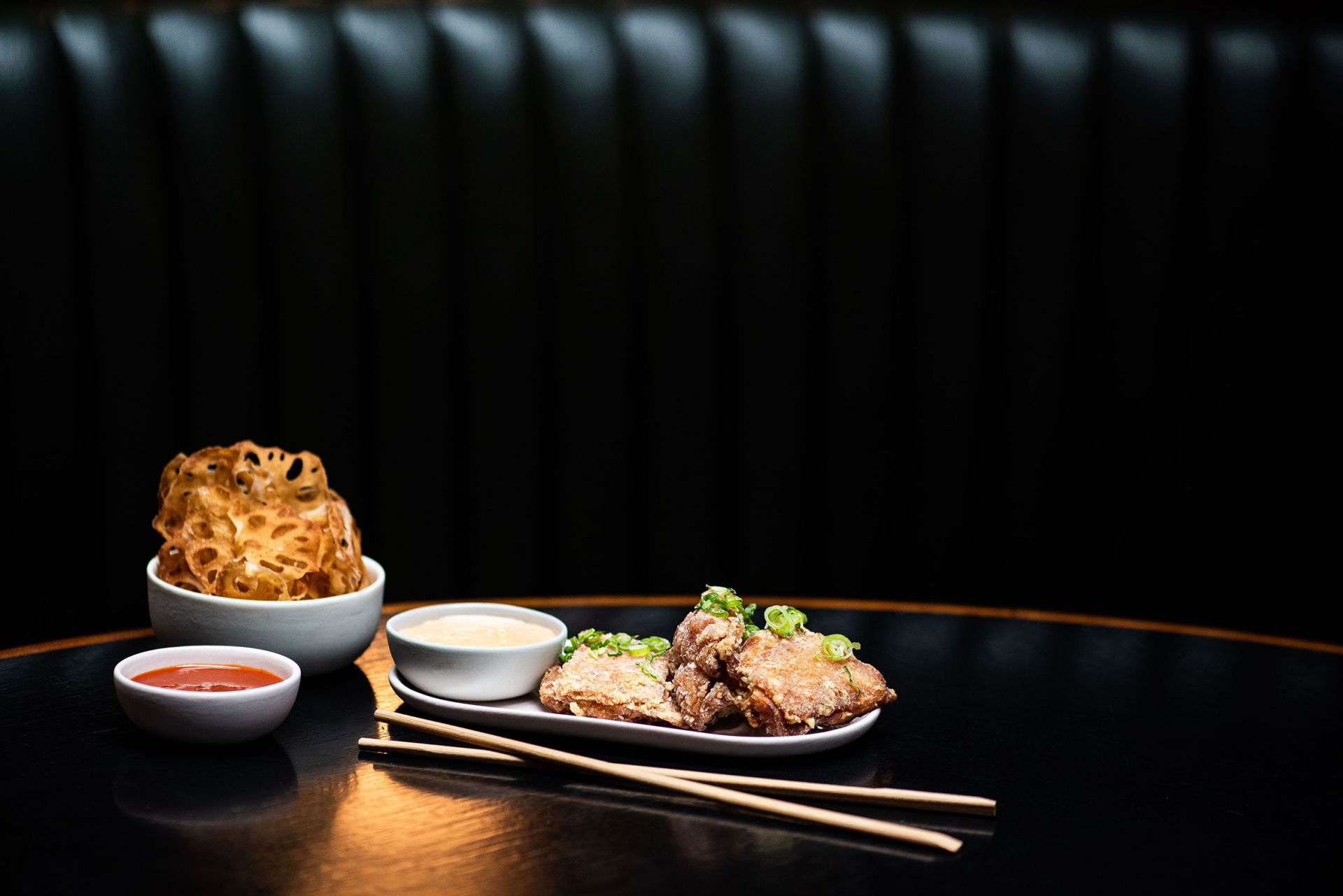 What is it?
A sprawling Japanese izakaya off Great Eastern Street.

And what's the lowdown?
An izakaya is a Japanese tavern that also does dinky plates of booze food (in that order). This slick new Shoreditch spot feels very much more restaurant than drinking den – it's located in the swooning former enclaves of Merchant's Tavern, for one – but that's semantics when the menu is this attractive. Think stuffed hirata buns, robata-grilled meats (the truffle miso short rib is a de facto signature) and painterly sushi rolls, washed down with house lager, coconut gimlets and sweet pea spritzes. 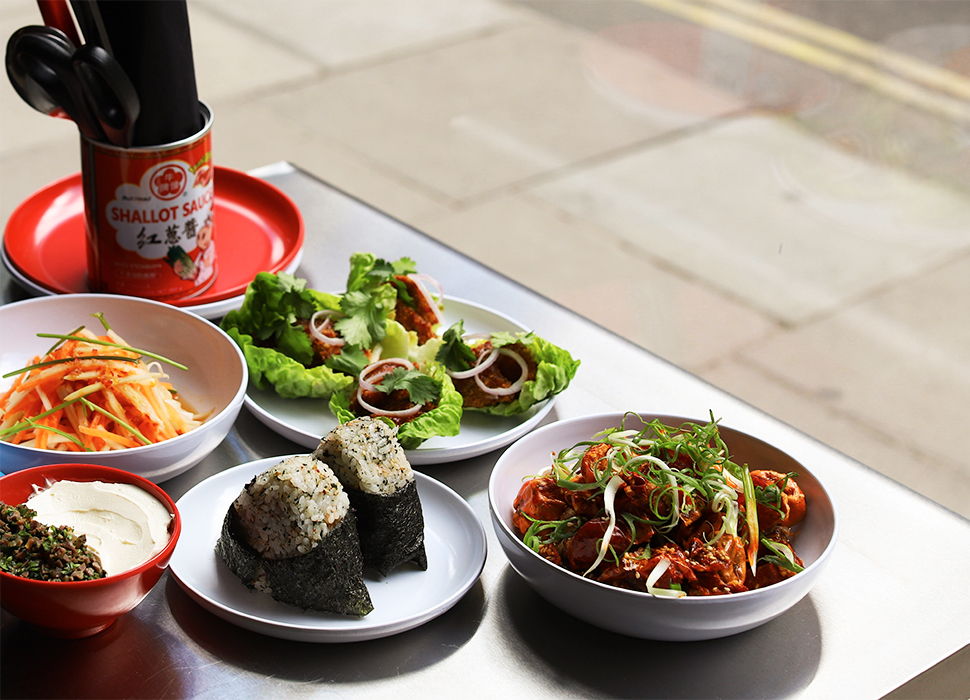 What is it?
Everyone’s favourite refurbed Taiwanese-chicken-and-snacks joint from the people behind TĀTĀ Eatery.

What's the lowdown?
Long ago, back when people were eating Tide pods for some reason, this fried-chicken hawker was a dinky stall in Camden Parkway. Everyone really liked it, so it moved into a permanent space in Soho. And that was pretty much that – until Zijun Meng and Ana Gonçalves, the flavour wizards behind TĀTĀ Eatery, came along and zapped the menu with a bolt of genius. The chicken dishes are still there (try the ludicrously moist soy-poached chicken, never look back), but they sit alongside an equally delicious selection of inspired snacks – like braised and minced gizzards with smoked cream cheese (served with a pack of Doritos for scooping), or crinkle fries awash with stir-fry discard and mayo. Sounds insane, but it all works. The cocktails are quality too. 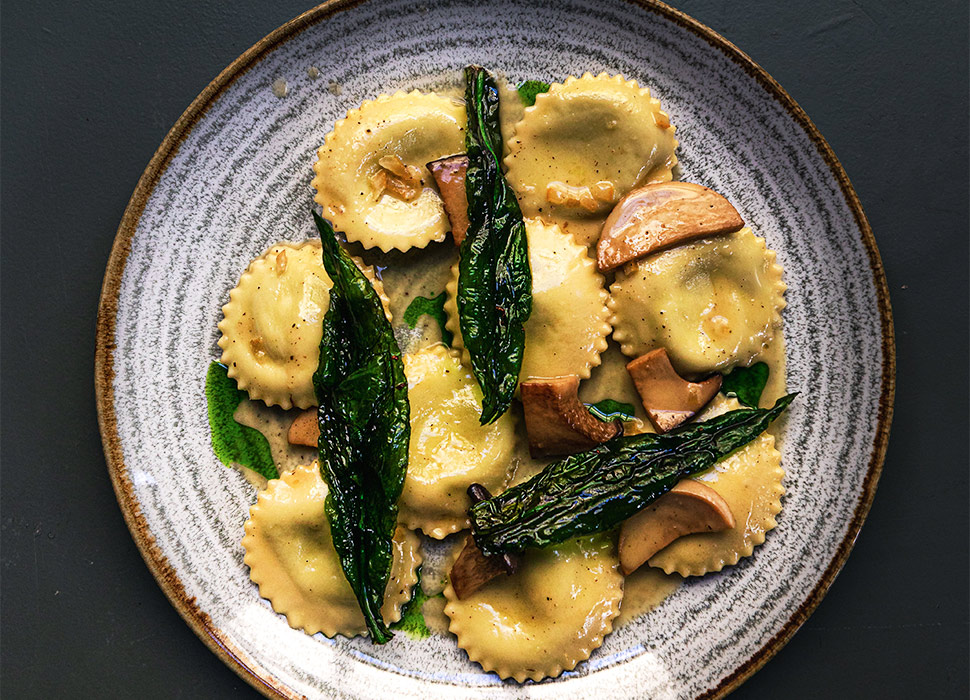 What is it?
A chilled-out, seasonal-Italian import from the Sussex coast.

What's the lowdown?
Already beloved in Brighton and Hove – where you’ll find its two other locations – this casual Italian diner is making a play for the capital, despite there being no shortage of mid-range pasta hawkers across every London borough. No matter: the owners of Cin Cin – two affable Australian blokes – are unfazed, and have installed their London branch right in Fitzrovia, where fine restaurants abound. They’re probably pretty confident because the food here is genuinely good – the short, contained menu of seasonally led dishes (overstuffed agnolotti bursting with whatever’s fresh; burrata served with salty prosciutto and market veg) and classic desserts (the salty-sweet affogato with date ice cream is heaven) ensure consistent quality, and the vibes in the small dining space are always high. 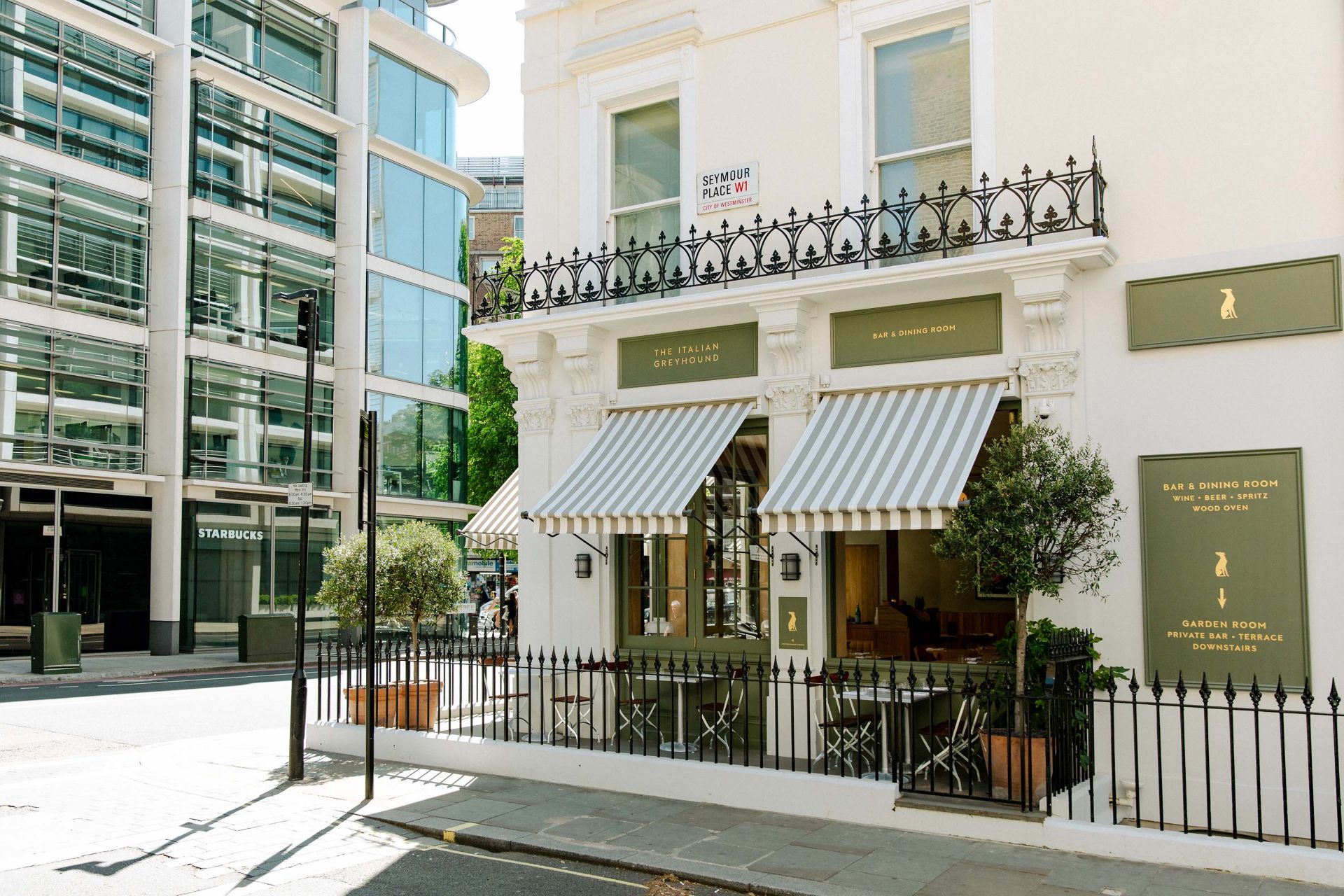 What is it?
A slick, bi-level drinks-and-food stopover in a Marylebone townhouse.

What's the lowdown?
Run by sibling duo Marcello and Gabriel Bernardi (formerly of their eponymous restaurant at the same site), the Italian Greyhound serves – you guessed it – seasonal Italian plates that pair excellently with a Negroni and a sunny day: moreishly salty pizzette; airy, veg-scattered ravioli; and herby, oozy burrata. Outside, cheery green-and-white awnings bedeck the ivory façade; inside, it’s chic and bright, with curving Scandi furniture and trendy pink limewash walls. We recommend nabbing a seat on the street-facing terrace for the best people watching in W1. 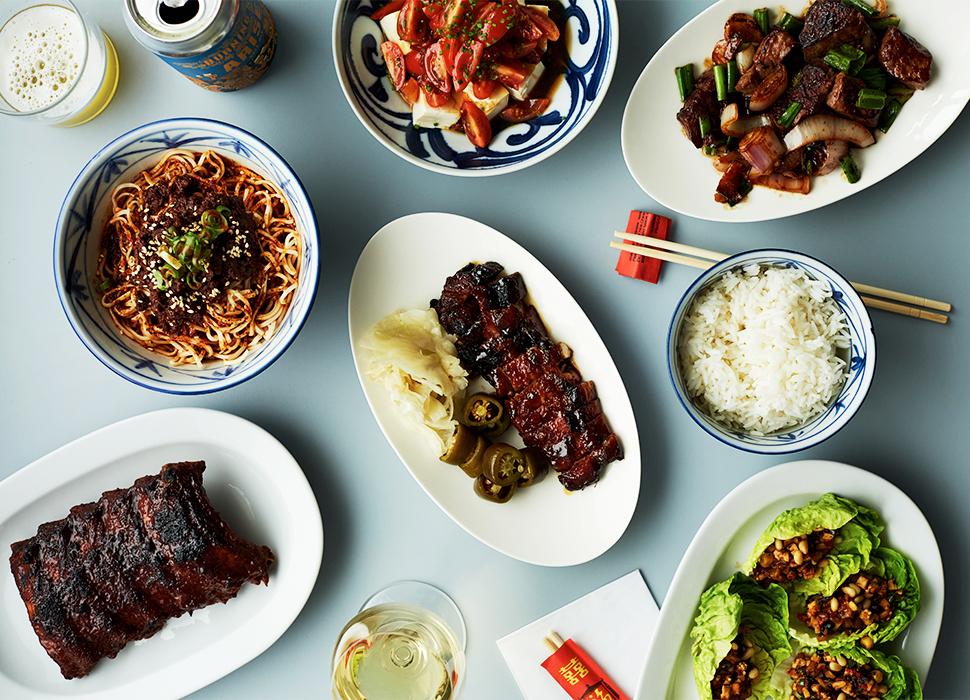 What is it?
A dinky modern Cantonese joint in Balham.

And what's the lowdown?
What was once shorthand for 'classic' Chinese cuisine in the capital has been given a slick makeover by the Red Duck. Chef Chi San – a former Alan Yau acolyte – is knocking out superlative takes on the classics of char siu, crispy duck, chow mein et al, bolstered by a canny eye on ingredient provenance and a decent drinks list of old-world wines, interesting cocktails and probiotic sodas. 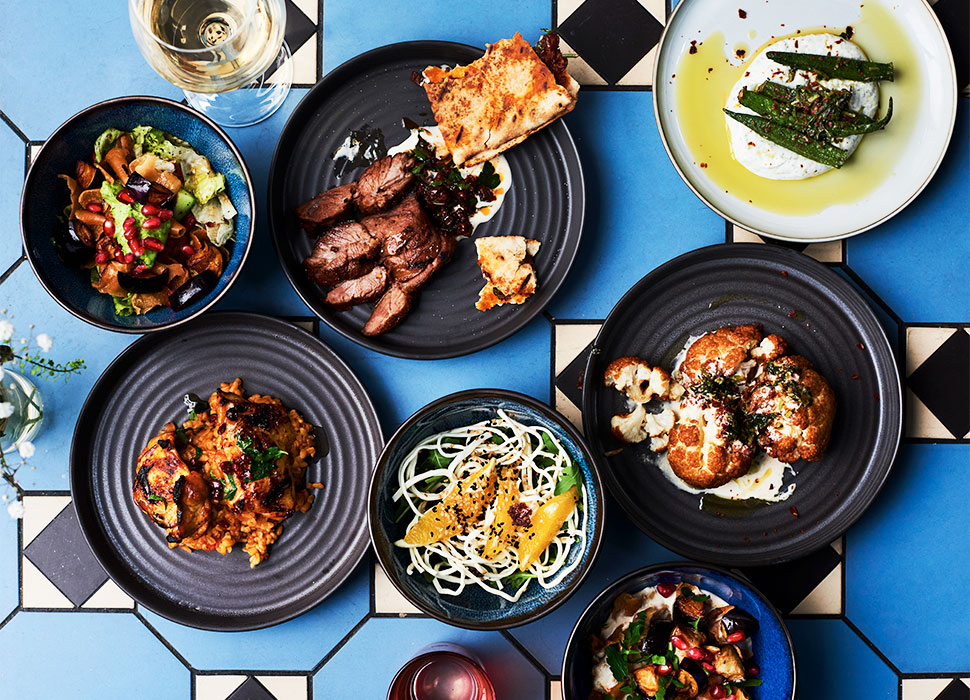 They don't do spreads like this London (until now) / Image: Issy Croker

What is it?
A big-hearted Syrian restaurant run by London’s most adored chef.

What's the lowdown?
Everyone loves Imad Alarnab. The Damascus-born chef (and refugee) made a name for himself through his charitable supper clubs that raised funds for the charity Choose Love. His warm presence at the dinners (and delicious falafel) vaulted him to icon status on London’s pop-up circuit. Now he finally has a permanent restaurant right off of Carnaby Street, where diners can try his legendary dishes – smoky baba ghanoj; cumin-scented fettet macdous (minced lamb and baby aubergine); piping, pillowy flatbread – any night of the week.