The most beatific beaches in striking distance of London

A day at the beach is easier than you might think: here’s our pick of the sunniest seaside spots within a stone’s throw (or skim) of the city

London is the capital that almost has it all. Almost. There’s just one thing missing: a bit of sand and sea to soothe your city-weary body. Even the proudest Londoner will admit they’d rather be by the seaside on a scorching summer’s day. Thankfully, England’s bustling south-east isn’t short of serene shores and playful playas – these coastal gems are all less than two hours away by car, so you’ll be swapping the tube for a beach towel before you know it.

When you're done exploring these, why not make a break for 10 incredible lesser-known beaches across the UK?

Not enough for you? These are the best lesser-known beaches in all Europe.

The best for: wondrous white cliffs and historic bakes

Pebbly Birling Gap beach is loomed over by the Seven Sisters. These stoic, staggering South Downs bluffs – one of the south of England's most resplendent natural sights – have stood in for the White Cliffs of Dover on more than one occasion. Remember Robin Hood Prince of Thieves, when Kevin Costner kisses the wave-washed ground as he jumps off the rowing boat? Well, don’t do that – nobody wants a mouth full of grit – but you’ll still be glad you came. Once you’ve undertaken a breathless cliff hike, stop in at the pleasant National Trust café. The speciality here is lemon curd cake, inspired by the looted citrussy cargo of a nearby 1790 shipwreck. 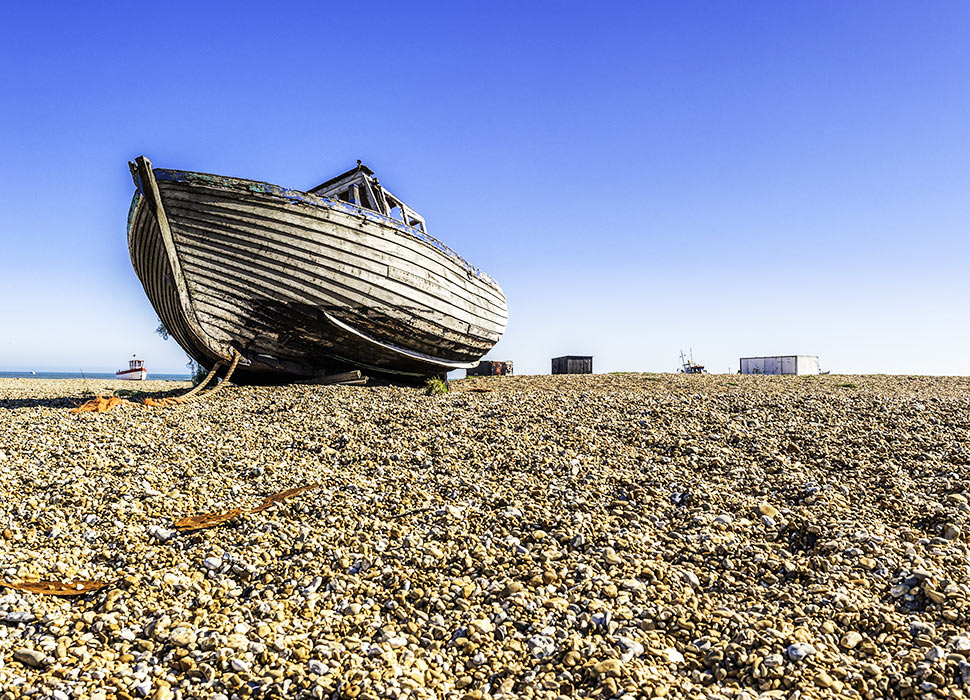 The best for: dystopian vibes and Derek Jarman stans

With its desert-like appearance, Dungeness isn’t exactly a traditional beach destination. Weird WWII tech, abandoned buildings and a nuclear power station punctuate this outré headland, beloved of the late artist Derek Jarman. His Prospect Cottage is a canvas of itself – the rustic fisherman’s hut, painted with tar just like his moody 'Black Paintings', was where the avant-garde Jarman retreated to. A five-minute stroll brings you to another shack, but this one comes with grub: the Dungeness Snack Shack catches its own fish, so aim to arrive in the morning for baps filled with crab just hauled off the trawler.

Minimalism is the name of the game at this sedate Essex stretch / Image: Adobe Stock

The best for: horde-free holidays and history buffs

With gentle seas and a rainbow of beach huts, it’s a surprise Blue Flag-listed Frinton-on-Sea remains so sleepy. But this was all part of its creator’s grand plan: industrialist Richard Powell Cooper was the resort’s main investor, stipulating that there would be no pier, no pubs and no shorts on his golf course. The rules stuck – Frinton only opened its first pub, the homely Lock & Barrel, in 2000, and bare legs were finally allowed on the fairway in 2008. So, if you’re looking for a properly peaceful getaway, you ironically have capitalist Cooper to thank for Frinton’s uncommercial aura. 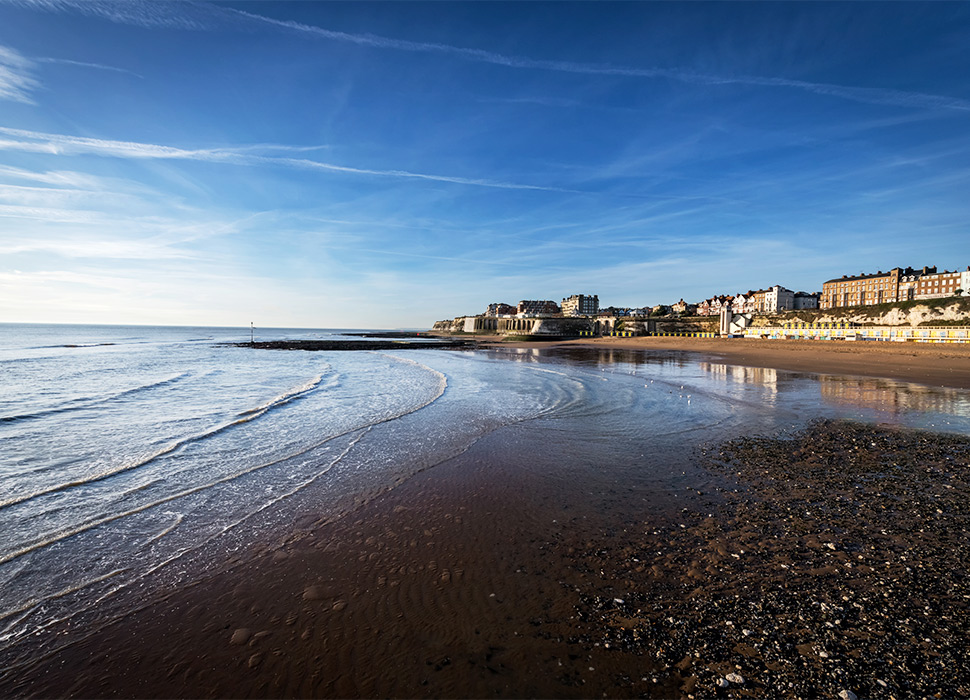 If Dickens approved, it's all right with us / Image: Adobe Stock

The best for: literary lovers and water babies

“Sky, sea, beach, and village, lie as still before us as if they were sitting for the picture,” wrote Charles Dickens of Broadstairs, his favourite holiday spot. The pretty Victorian town – overlooked by the IRL Bleak House where the author used to stay every summer – leans elegantly towards horseshoe-shaped Viking Bay, which has all the charms of a classic English family getaway. Get some old-fashioned thrills on the swing boat ride, or let the kids loose in the concrete tidal paddling pool, which only reveals itself when the sea decides it’s time to play. 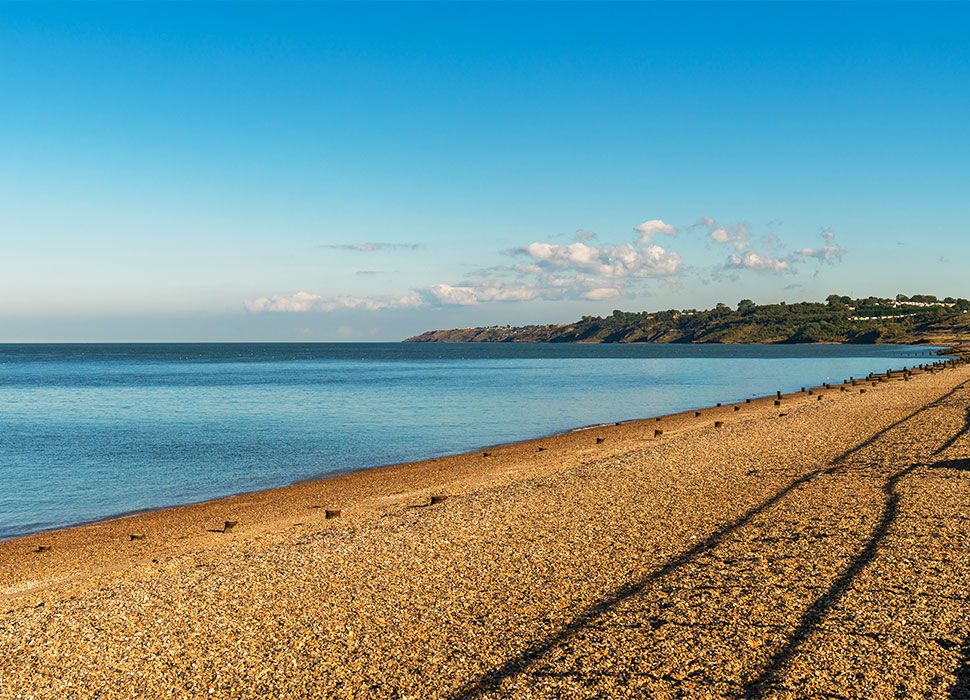 Get yourself over to this island in the sun / Image: Adobe Stock

The best for: gym bunnies and the sweet toothed

Lovely as it is, the beach isn’t the main attraction at Minster Leas. Instead, come for the mile-long prom, a leisurely route for dog walkers and sunrise photographers. Your first stop is a cute confectionery shop in an old lifeguard hut, where you’ll relive all those pick ‘n’ mix childhood dreams and gorge on homemade fudge. Then, burn off the calories by using the free green gym equipment that lines the path: the static bike is a hassle-free alternative to the real thing, with the wind blowing through your hair, and sweeping panoramas over the vast Thames Estuary.

The best for: finding buried treasure and top-notch dinners

If swimming, surfing and sandcastle-building don’t appeal, bring your metal detector (or just a sturdy stick fetched from the dunes) as this stretch of Sussex paradise is one of the best places in the UK for beachcombing. Perhaps you’ll find a long-lost family heirloom, or better yet, some kind of smuggler's booty. Even if you don’t find a prize among the soft grains, you should still reward your hard work with a meal at houseplant-filled The Gallivant, where the menus change weekly depending on what can be foraged in local hedgerows. 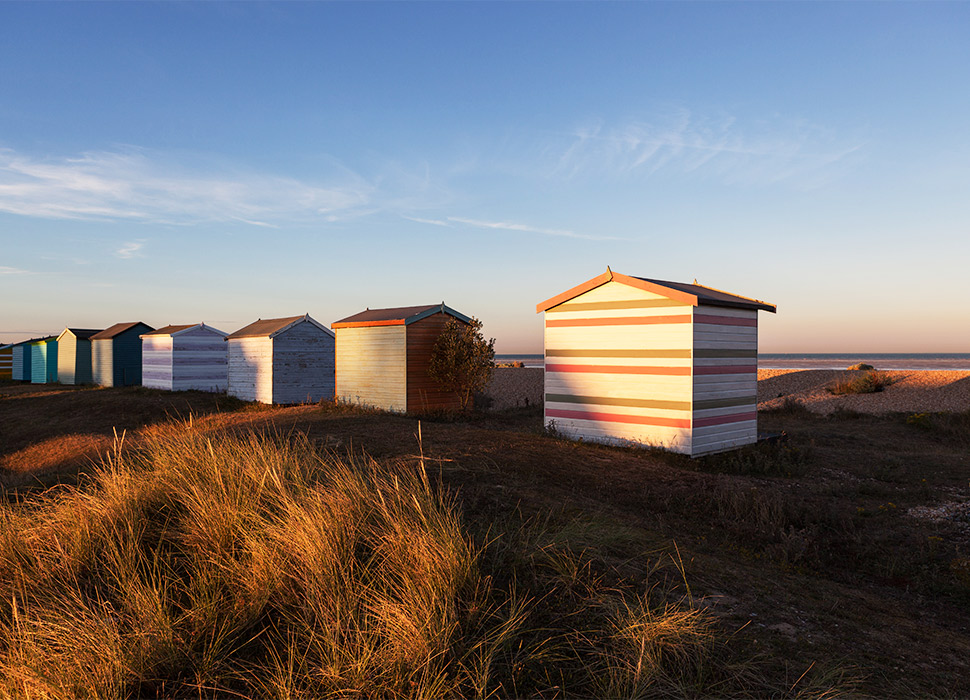 The clue's (almost) in the name with this Kentish gem / Image: Adobe Stock

The best for: twitchers and adrenaline junkies

A couple of miles from Dungeness is Greatstone Beach, a two-mile, groyne-free idyll. The crystal water is shallow, so you can paddle to your heart’s content. On land, the marram-anchored dunes are a Site of Special Scientific Interest, and birds of prey patrol the shore at low tide in search of straggling lugworms. The oyster catchers are especially voracious come feeding time. Humans can also be spotted enjoying the expansive sand, with buggies, land yachting and even a vintage steam train offering swell ways to get about.

The best for: a bit of peace and quiet

Brighton is great, but it’s not exactly the place to break free of the crowds. Cue Goring-by-Sea, one of Worthing’s lesser-known suburbs. In the early morning, you’ll hear nothing but the clash of wood and wellies against fine pebbles, as flounder fishermen moor up on the beach. Clamber up the shingle to get a showstopping hot choc and finger-licking cream cake from Sea Lane, a no-frills caff beloved by locals: the tables on the beach are popular on sunny days, so while you wait, have a kickabout on the green behind Goring’s rentable beach huts. 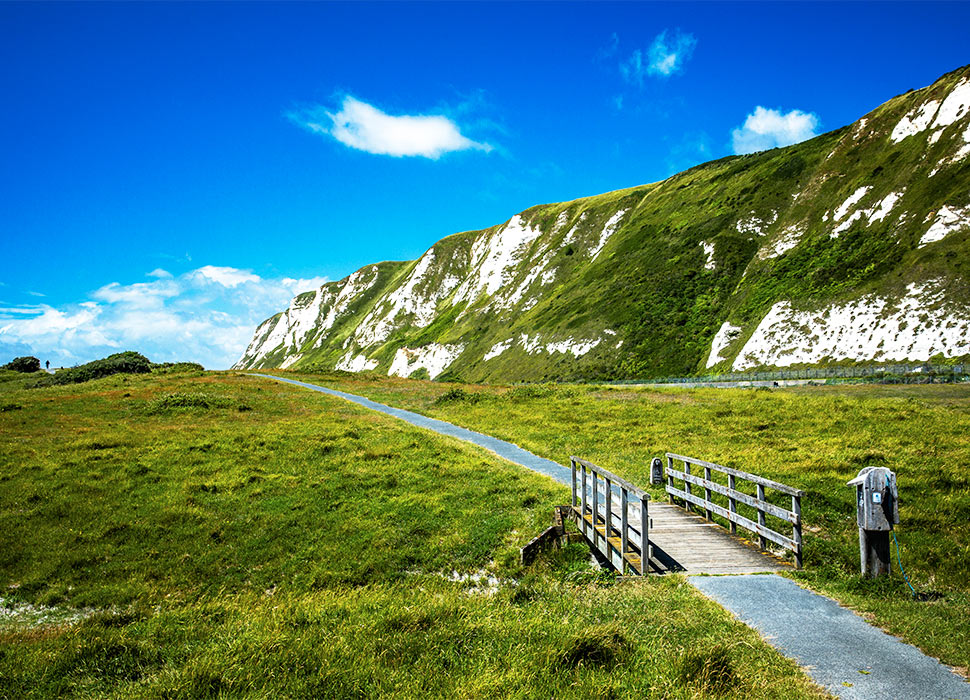 This man-made chalk expanse is a fine spot for fish / Image: Adobe Stock

The best for: Grand Designs fans and 21st-century fishermen

At the foot of the actual White Cliffs is the newest bit of England. After the Eurotunnel burrowed through the sea bed, they were left with 5 million cubic feet of chalk. The result? Samphire Hoe, reclaimed land turned nature reserve. For a man-made construction, the beach here is rather rugged, better suited to rockpooling and fishing than swimming and sunbathing (even though the water is astonishingly clear). Amateurs will love catching tiddlers in their nets, but anglers go for the bigger catch to be found off the sea wall.

The best for: lazy days and train trips

East Beach? More like Easy Beach, y'get me? A direct train whisks you from Fenchurch Street to this sandy Southend esplanade in one short hour. The shore is steps away from the station, through Shoebury’s fascinating former garrison. Expect to see crowds of kitesurfers heading in the same direction: the windy Thames Estuary has optimal conditions for catching some air, but you can also put up a windbreaker and roll out the picnic blanket. It’s also the only beach in town with a barbecue area, so you can throw some burgers on the grill while you go for a dip.

The best for: tales of the sea

Once in a blue moon – well, a moon that makes the tide vanish – the skeletal wreck of the Amsterdam pokes above the Bulverhythe sand. The troubled Dutch vessel ran aground in 1749, after a voyage that saw its sailors get drunk on its wine cargo, mutiny then contract plague (not on the same day). Its well-preserved remains are only visible at the lowest tides of the year, but well-timed walking tours are available from the Shipwreck Museum. If you’re not around for that, either take to the shingle and swim between the groynes that bookmark the beach, or hire a bike and use Bulverhythe as a base to whizz between historic Hastings and arty Eastbourne.