The best food isn't always found in the city, you know. Strike into the sticks outside the M25 and you'll happen upon some truly winning country gastropubs. Here are some of the finest

As a wise man once optimistically sang: "Sun is shining, the weather is sweet." And while it’s fair to assume that Bob probably wasn’t directing his summer gaze to the area roughly located around the M25, we’re still dreaming of balmy weekends packed with long walks and the finest pub fare we can find. So if your foodie heart desires more than just a packet of peanuts and an underwhelming scotch egg, then we’ve got you covered. Work your way through these ten top-tier top gastropubs – all a short hop from the city – and your stomach will thank you, we promise.

Can't be faffed to leave town? Your loss, but we've made a list of the most exciting new restaurant openings in London for you anyway.

Feelin' eco? Here are the best farm-to-table and hyperlocal restaurants in Europe. 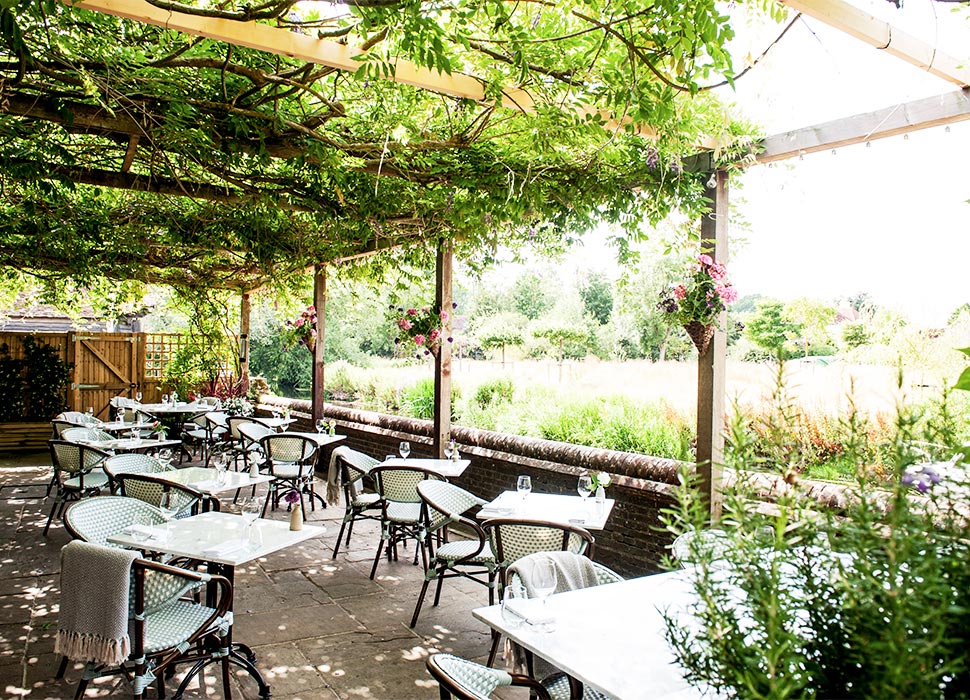 The greenery-draped terrace at The Fordwich Arms

Located, for ultimate quaint points, in Britain’s smallest town and helmed by wünderkind chef Daniel Smith, there’s a couple of reasons why The Fordwich Arms is perpetually nestled among the UK’s most decorated posh pubs. Those being its scenic riverside location and a menu that prioritises seasonal Kentish produce with a focus on fish (ours is the south coast lobster, or the brill with clam chowder, per-lease). You can expect to walk away with emptier pockets than from most boozers, but the faultless fare is worth every single penny. 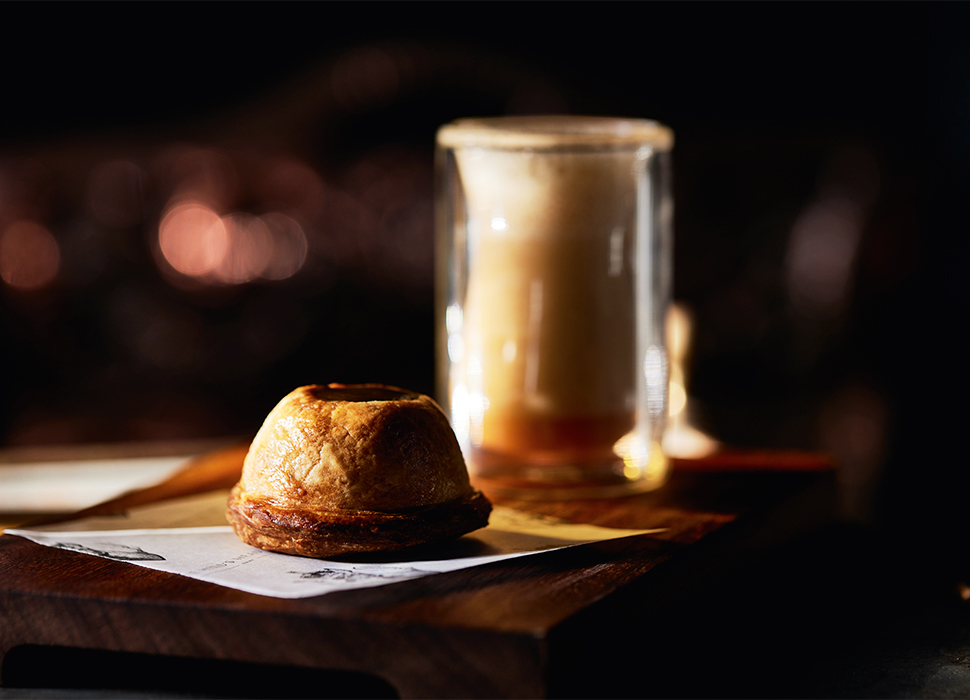 Tucked away in the village of Bray, with parts of the building dating back to the 15th century, The Hinds Head is a suitably lavish enclave for housing Willy Wonka-like chef Heston Blumenthal's original foray into pubs. All wood panelling and low beams, you’ll feel like a lord or lady of the manor before you’ve even perused the menu. And what a menu it is: traditional bits such as roast guinea fowl and oxtail and kidney pudding rub shoulders with a ‘hash of snails’ starter and a pudding entitled ‘chocolate wine slush’. And would anyone else present their own version of Quavers (beetroot and chicken-flavoured, of course) as a pre-meal bar snack? We doubt it. 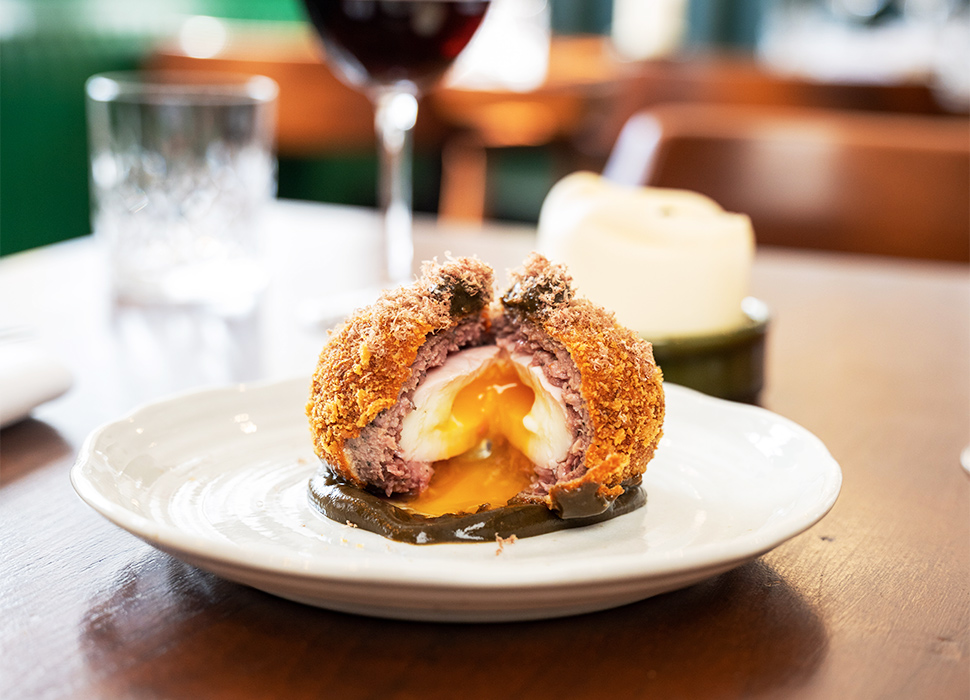 A venison scotch egg at The Silver Cup / Image: Three2

Located a mere 25 minutes from St Pancras, the family-centric town of Harpenden has become a hotspot for Londoners fleeing the city for greener pastures. Perhaps unsurprisingly given the clientele, it has a strong list in bougie boozers too, with The Silver Cup, restored from its 19th century beginnings into a tastefully modern affair, at the top. The pub does an à la carte and set menu from Thursday through Saturday, featuring indulgent twists on trad snacks snacks like venison scotch eggs or a single 'cheesy chip with pickled onion', and then more refined plates of crispy cod cheek with taramasalata and sea purslane, or salt marsh lamb with almond, nettle and St George mushroom. Their lavish Sunday roast is also an in-demand highlight. 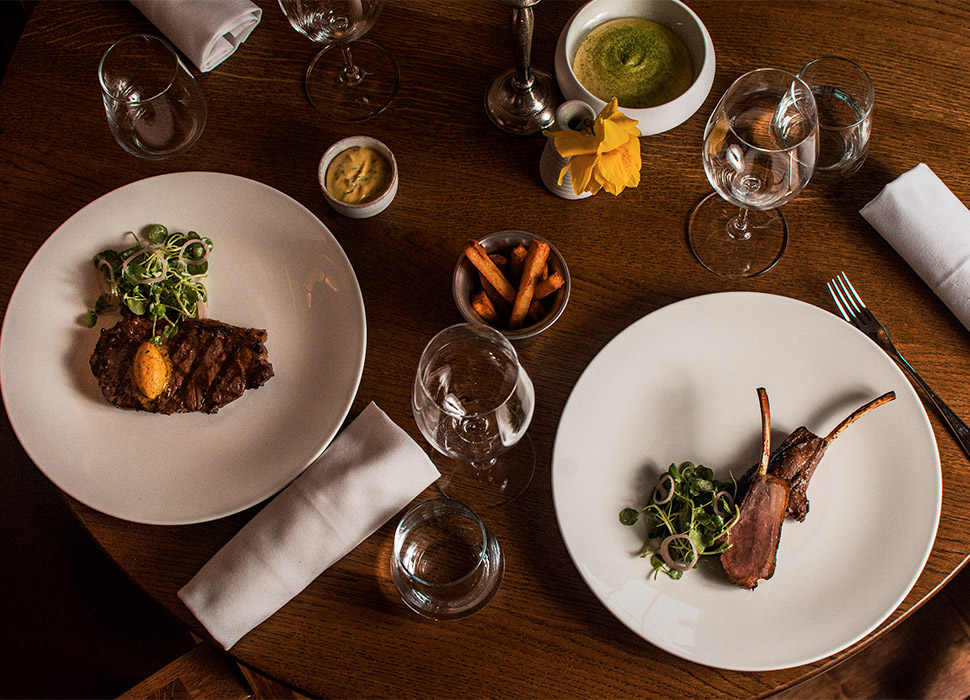 Refined steak and lamb dishes at The Bridge Arms

Located just south of Canterbury, The Bridge Arms is fast becoming one of the southeast's rising gastro stars. Helmed by the team behind The Fordwich Arms, its focus on cooking over charcoal cribbed from the local Kentish woodland has already landed the eatery a Michelin star – and it’s stomach-rumblingly easy to see why. With recent offerings including an impossibly pretty Jerusalem artichoke tart, a rack of Blackface lamb main and desserts such as a delicate, rich hazelnut brulée tart, The Bridge is already nipping at the heels of its elder sibling. 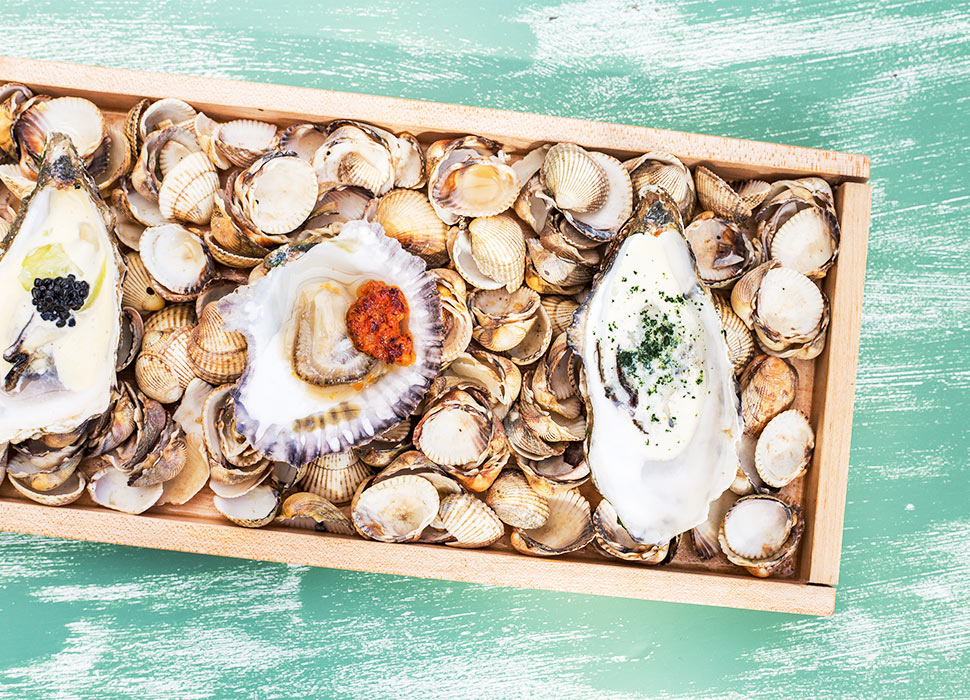 A skip from its more famous neighbour of Whitstable, the village of Seasalter is something of an underrated gem on the Kent coast – largely down to Stephen Harris’s The Sportsman. Having topped Estrella’s list of 'Britain’s Best Gastropubs 'for five of the past eight years, its USP is a commitment to using produce taken almost entirely from the land surrounding the pub, from hand-picked seaweed to hand-made sea salt. As such, expect a constantly shifting menu of only the freshest, hyper-seasonal ingredients (leaning on seafood), coupled with the perfect beachside walk to clear your head from the exceptionally reasonable wine list. 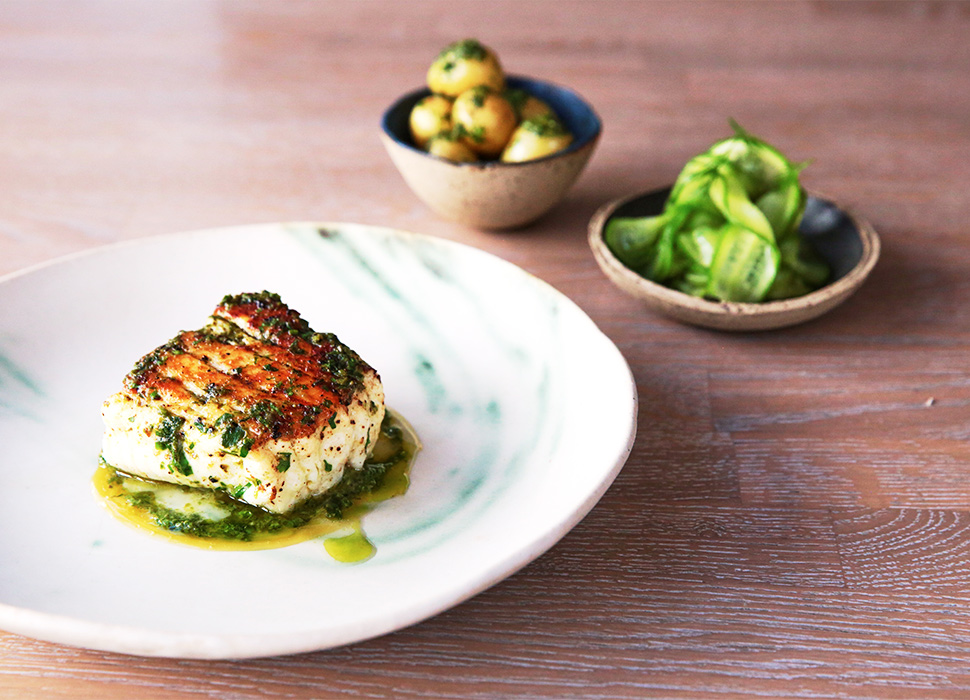 In the Essex village of Great Dunmow, an old tradition dictates that, once every four years, a flitch – or side – of bacon be awarded to a couple who’ve been happily married for a year and a day. Thankfully, singletons and embittered cohabitors alike can dine in the area’s namesake pub (with an attached boutique hotel), which prioritises tasting menus filled with local farm produce including, yes, a signature flitch of bacon and roast scallop dish. Frankly, it’d be rude not to.

Awarded two AA rosettes and a prestigious Bib Gourmand from Michelin in 2021, Tunbridge Wells’ The Kentish Hare – opened in 2014 with a pandemic-shaped hole in the middle – might be a relative newcomer on the bucolic gastropub block, but it’s more than stamped its mark on the scene. For an affordable treat, take advantage of their set lunch menu, where you can snaffle two courses with change from 30 quid. We’re opting for the Suffolk lamb shoulder and chocolate delice, topped off with a stroll through the neighbouring woodlands. 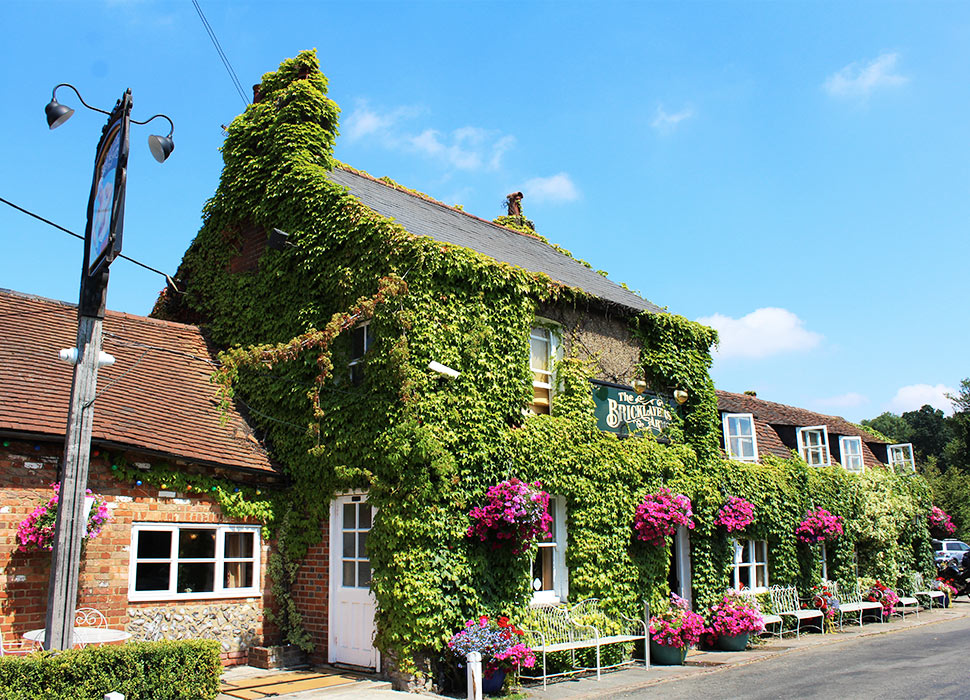 Get green with food envy at a home counties classic

2020’s Good Pub Guide dining category winner for Hertfordshire’s The Bricklayers Arms isn’t just a culinary hotspot, but the centrepiece of a full, wholesome day out. Meander across the rolling hills of the neighbouring Chess Valley and, when you’ve worked up an appetite, head back to sample head-chef Miroslav Shelling’s modern European cuisine, taking in a house special, home-smoked fish plate, alongside a menu stuffed with rich, meat-heavy treats. 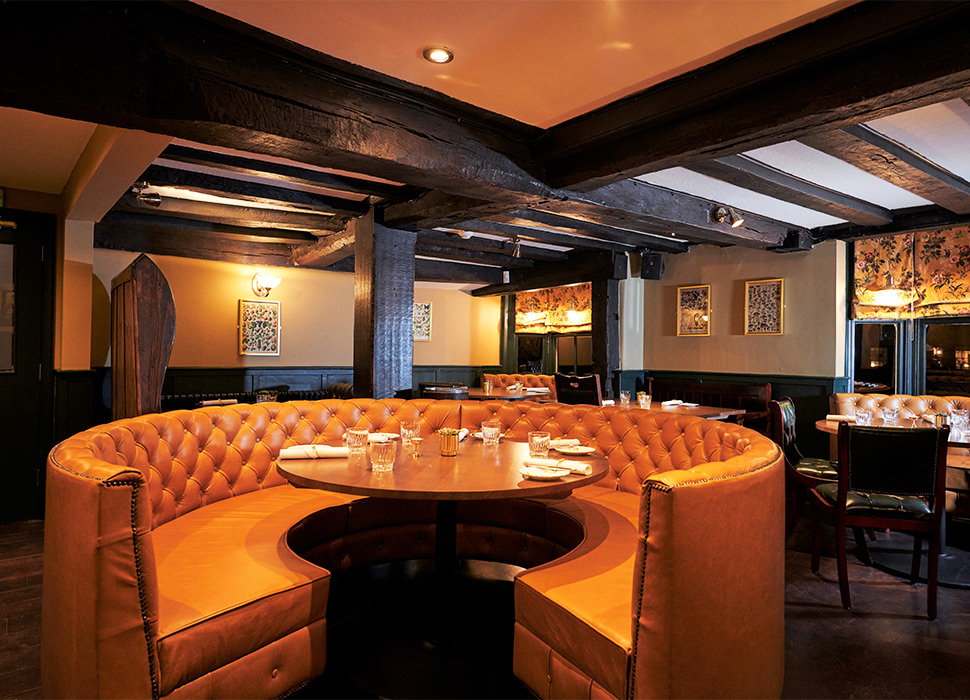 A former 17th-century coaching inn, The Greyhound comes Michelin-approved and with a lot of character. And though its walls might be full of history, its food is firmly looking to the future, with an Italian-influenced vegan tasting menu as one of its prime offerings. Elsewhere, you can pick up a lunchtime set menu priced at £30 for two courses, or simply graze on their mouth-watering selection of bar snacks, including brown crab crumpets and truffle arancini.

The Hand and Flowers 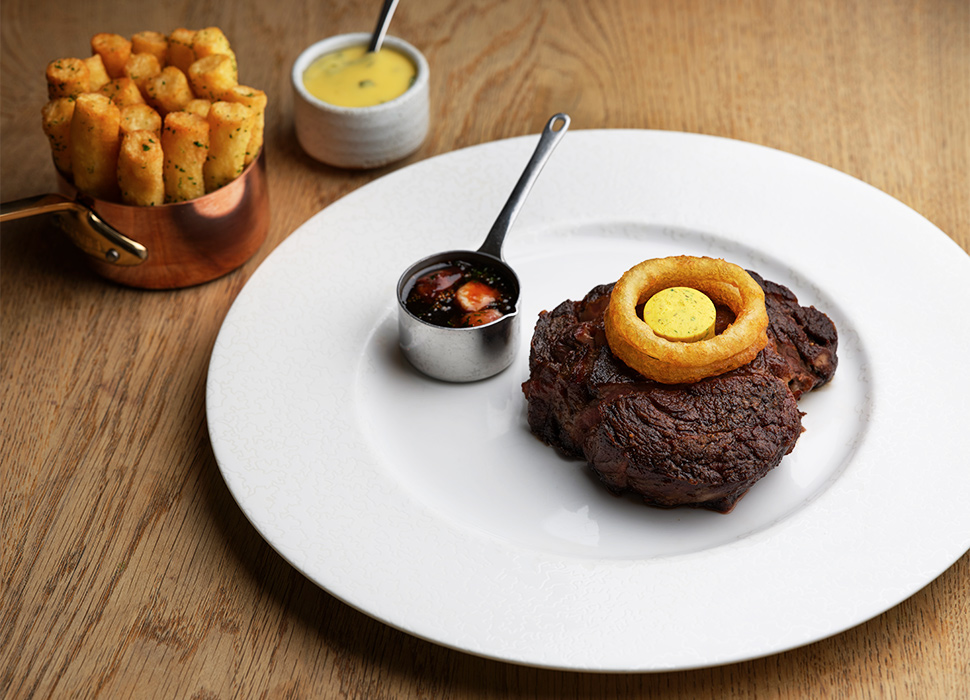 A stratospheric steak and chips at The Hand and Flowers / Image: Cristian Barnett

The only pub in the UK with two Michelin stars, Tom Kerridge’s relaxed country bolthole markets itself as “a proper pub, but with proper food”. Now let’s not beat around the bush here: a main course will set you back roughly the same price as an entire day and night of drinking at your local boozer (the cheapest, a pork tenderloin dish, comes in at £68.50, which is chaotically punchy in anyone's book). But if you want to really push the boat out without entering the stiff-collared world of trad Michelin eateries, then there are few places that’ll hit the brief quite so well.