The most beautiful beaches in Cornwall

England's southwestern tip is blessed with some of the dreamiest lengths in the country. But with around 300 beaches dotted about, the choice is endless – here's how to narrow it down 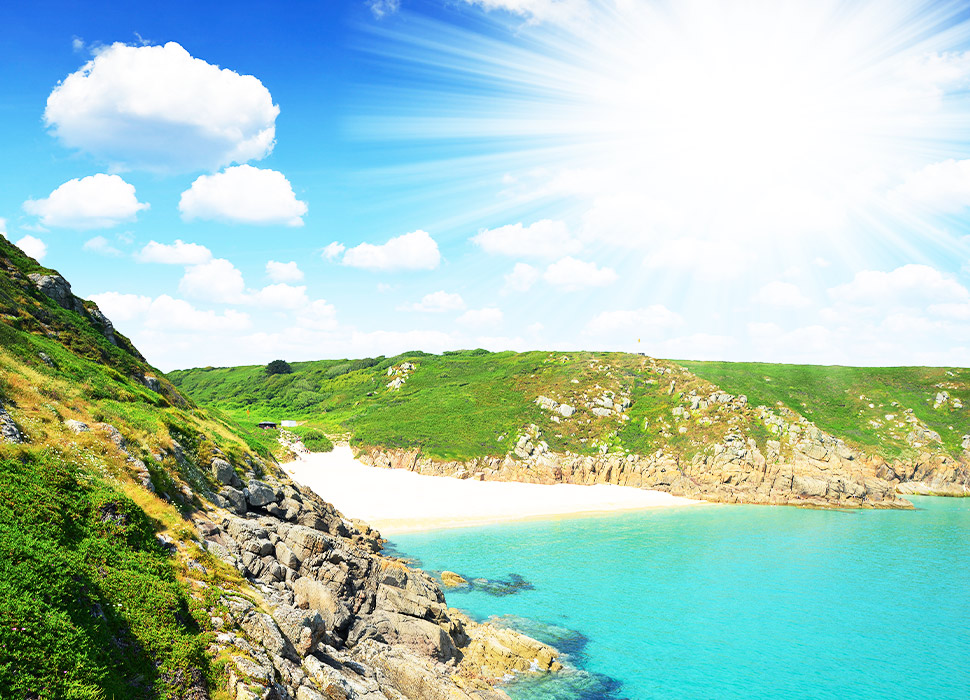 This classic golden-hued beauty is one of the prettiest beaches in the UK / Image: 123rf

With fine, white-gold sand and Mediterranean-blue waters, this small, wind-sheltered cove on the county’s south coast – close to Land’s End and a short drive from Penzance – is not just one of the most beautiful beaches in Cornwall but the whole of the UK. On a sunny day it feels you could be in the Caribbean, it’s that stunning. Close by is the revered Minack Theatre, an outdoor stage hacked into the cliffs that's known for its summertime Shakespeare productions. Wherever you’re coming from, a trip here is worth every yard. 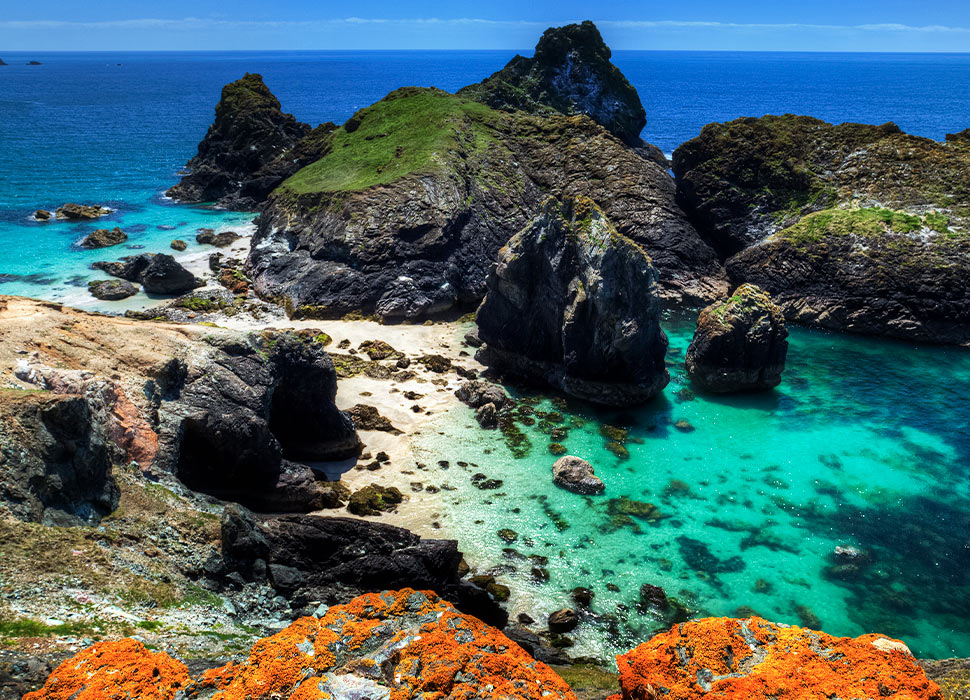 You'll barely believe this postcard-perfect cove is in the UK / Image: Adobe Stock

If you’re visiting in summer, it’s going to be busy, but it’s worth the scrum for a spot on this ludicrously pretty cove on the Lizard Peninsula of Cornwall’s south coast. The beautiful, white sand bay, jagged (and rare) serpentine rock and unbelievably clear turquoise water all evoke the feeling that you're in some far-flung place. Still, there’s a resolutely English repast on offer at Kynance Cove Cafe: the classic cream tea (jam first, naturally). Or go for a crab sandwich lunch and hustle for an outdoor table – the views of the bay are well worth it. 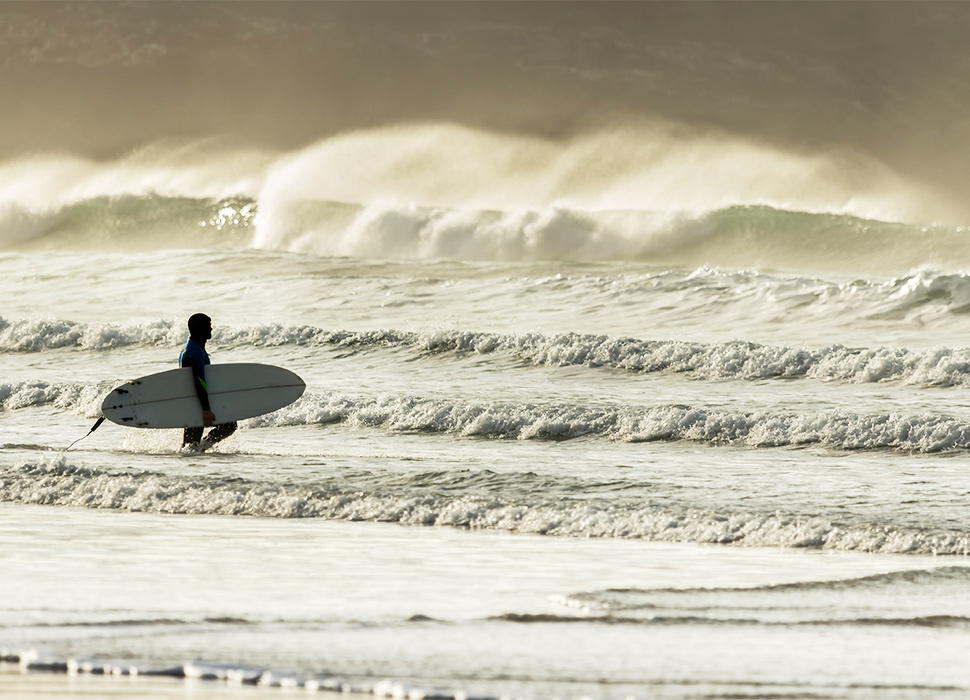 Catch a swell at this surfing paradise / Image: Adobe Stock

Behold: this is easily the best known surf beach in Cornwall (and probably the UK). Fistral offers loads of space, reliable swell and, in summer, an active surf scene with cool beach bars and food trucks that start to get busy in the run-up to August's Boardmasters, Europe’s largest surf festival that sees a week of surf-by-day, party-by-night goings on. But this bay also wins as a place to give surfing a go, as the breaks suit all levels. First-timers can take classes with nearby board specialists Extreme Academy. 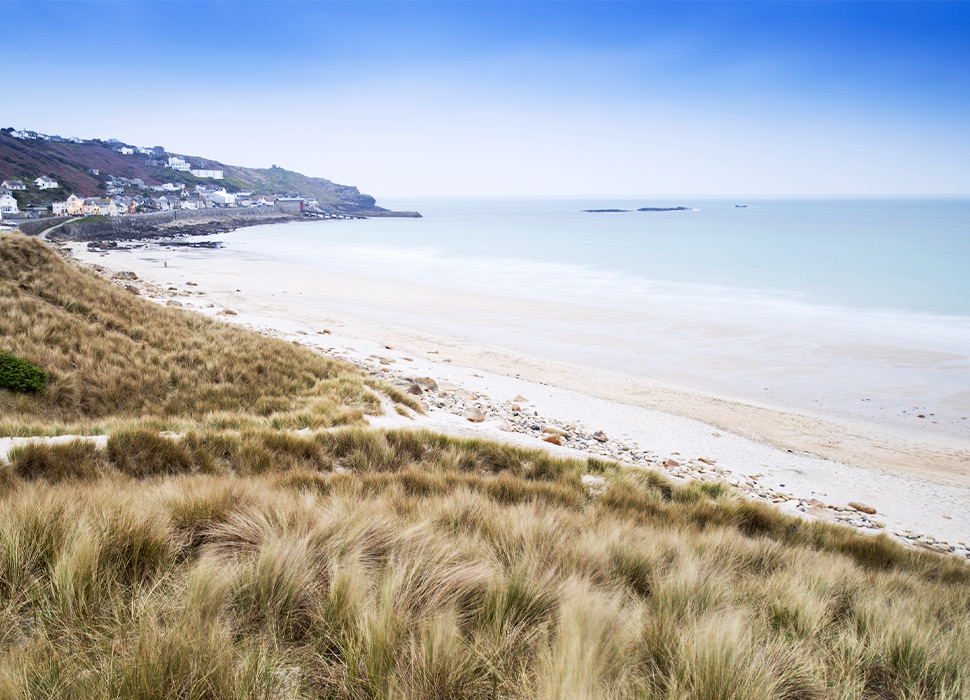 This epic stretch of seemingly endless sand on Cornwall’s west coast can feel remote even in peak summer. But that doesn't mean it's a snooze: you'll find consistent, all-levels surf here, plus a small fishing village known for its old-timey pubs such as The Old Success and First & Last inns. Lifeguards patrol the beach in summer so, despite its strong allure for surfers, the water is safe for swimmers, too. Start the day with a slow walk to Land’s End, just over a mile away along the stunning South West Coast Path. 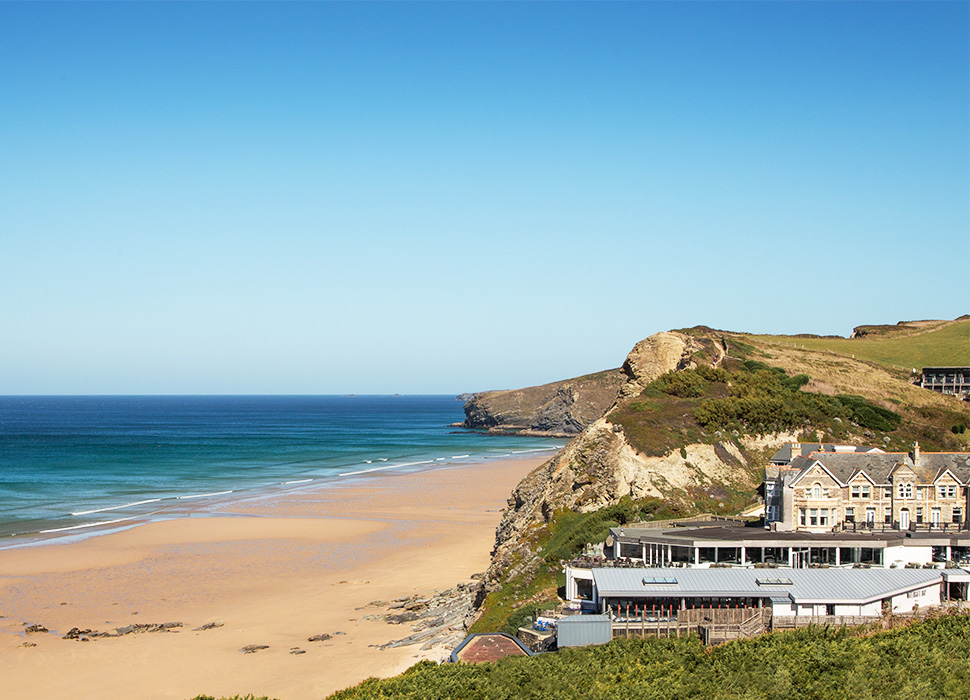 Get yourself on a high perch to watch the sun set over this magical bay / Image: Courtesy of Watergate Bay

Not far from Newquay, this beautiful two-mile bay is known for its dependable Atlantic surf, epic sunsets and watersport opps (for lessons on everything from surfing to stand-up paddle boarding, Extreme Academy has it covered). There’s also a small but buzzy after-beach scene thanks to swank hotel The Watergate Bay, which welcomes non-guests to its on-site resto, The Beach Shack – known for its stacked burgers and moules frites. Or there’s excellent seafood and wine at country-chic Emily Scott Food. 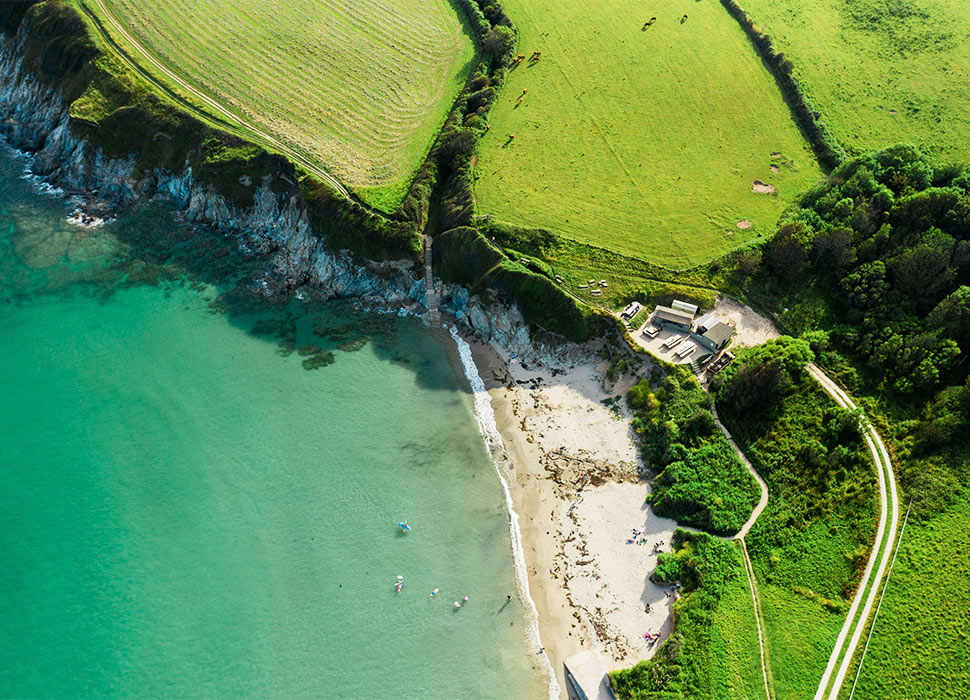 Can a beach restaurant ever be more popular than the beach itself? Well, here it just might be: the deservedly popular Hidden Hut on this small but lovely bay on Cornwall’s Roseland Peninsula does some of the region’s most sought-after seafood – think simple grilled mackerel with greens or cracked lobster over chips. Even if you're strictly beaching, Porthcurnick is a worthy spot, with space for families and rock pools suitable for toddlers. But we really recommend getting here for lunch – or prepare to wish you had. 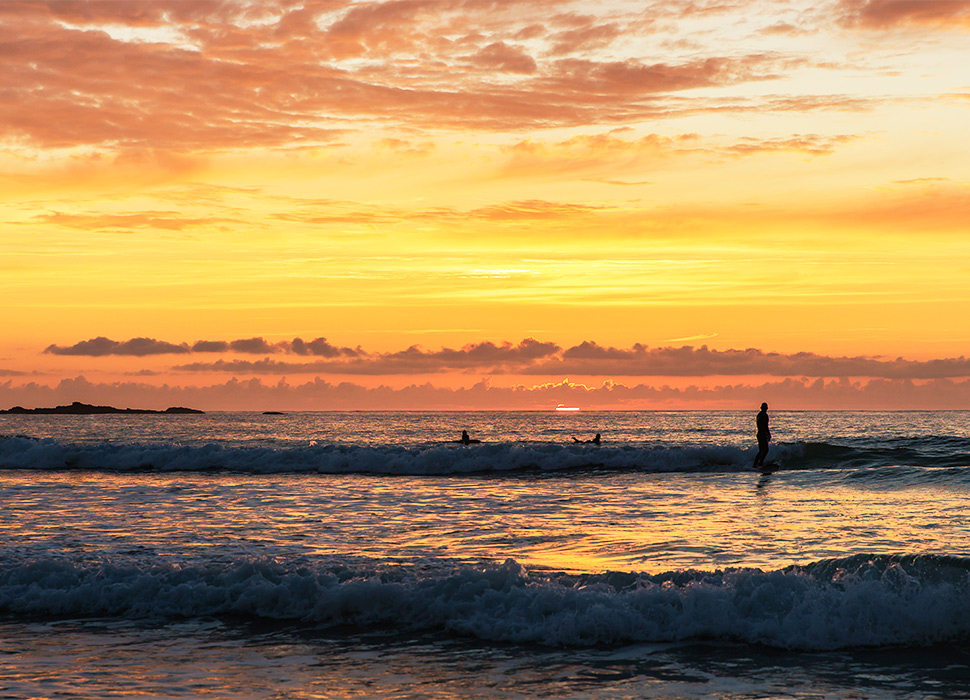 St Ives is blessed with myriad town beaches and, while none of them disappoint, arguably its best stretch of sand is Porthmeor. One of only eight beaches in the region to be awarded Blue Flag status, it’s clean and safe (and fully lifeguarded in summer) and, with plenty of space, ideal for families looking for their own patch. It’s right above the town, too, so it’s a good base to allow teens to wander off and explore. There’s delicious but unfussy seafood (and heated outdoor pods!) at hyped-up Porthmeor Café. 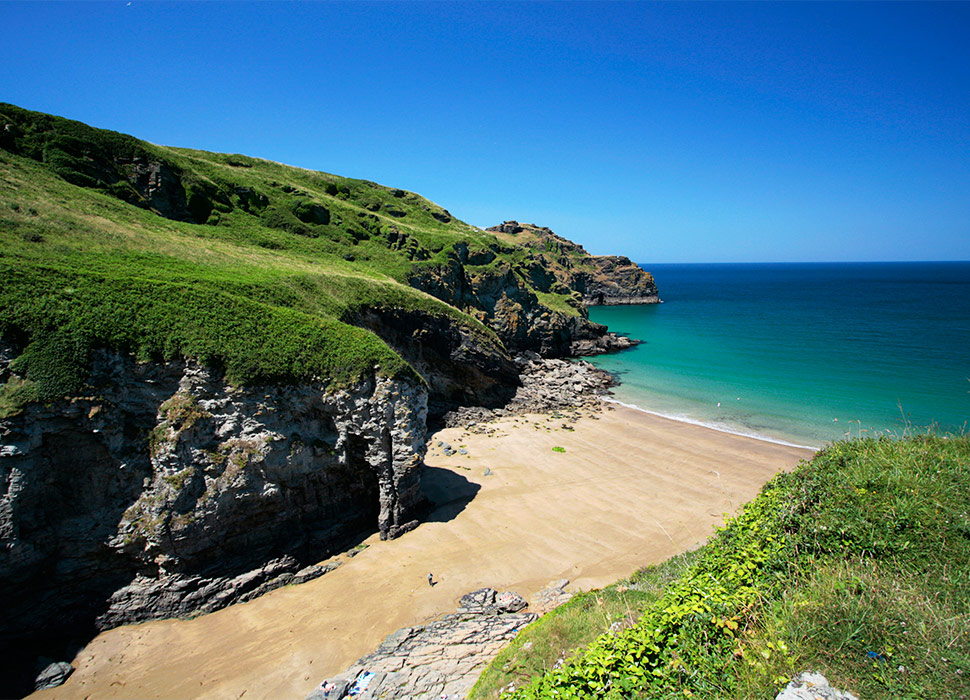 You probably won't find anyone else on this remote beach / Image: Alamy

Problem: it’s peak season and everywhere seems to be packed. Solution: Bossiney Cove – a small, seriously secluded and hard-to-reach bay between Tintangel and Boscastle on Cornwall’s north coast. You’ll need to time it right (the beach disappears at high tide) and expect a bit of hike to get there. But, at low-tide, a beautiful mini bay appears, flanked by vertical-steep cliffs (look out for the so-called 'elephant' rock formation). Expect soft, honey sand, amazingly clear waters and – our bet – hardly anyone else around. Yup, bliss.