From windswept Highland bays to hidden Cornish coves, chalky Kentish paradises and desolate shingle spits in Suffolk, these are some of the prettiest secret beaches across the UK

If it's more domestic sands you seek, here are the most beatific beaches in striking distance of London.

First the UK, then the world. Well, Europe, anyway: here are the best lesser-known beaches in Europe.

And while you're at it, these are the most beautiful islands in Europe, to boot. 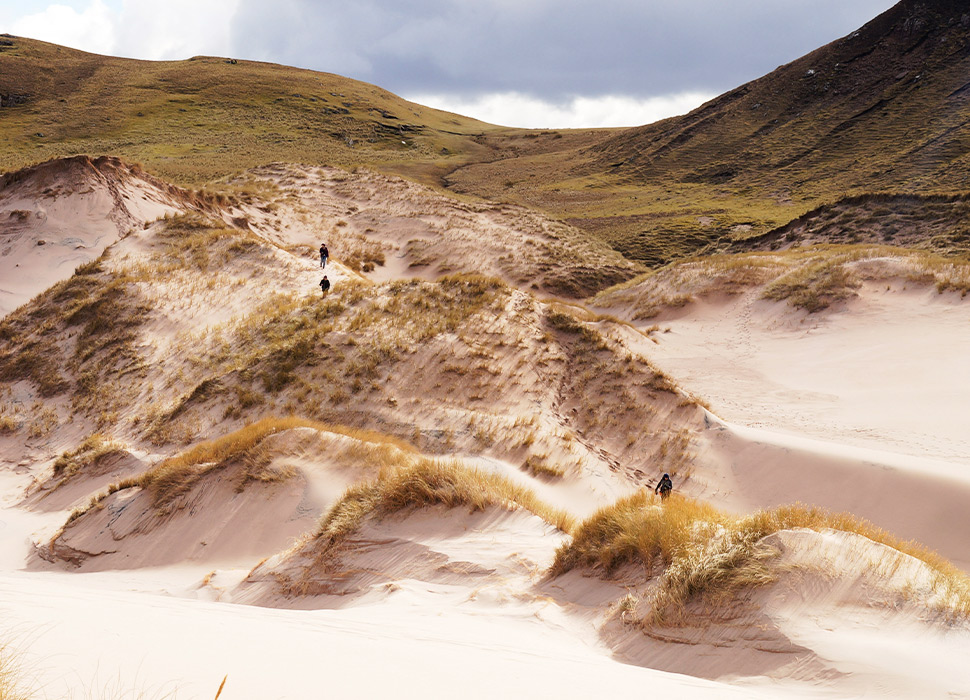 Set in the farthest reaches of Sutherland, in Scotland’s coastal Highlands, Sandwood is easily the most ‘secret’ beach on this list purely on account of being so remote. From Inverness it’s a 2.5-hour drive, and then another four miles on foot, but the intrepid will be greeted by what VisitScotland deems the most beautiful beach in Britain (though they would say that). Either way, it’s spectacular 1.5 miles of pristine pink sand backed by rolling dunes and the freshwater, trout-filled Sandwood Loch,  with the Torridonian sandstone sea-stack of Am Buachaille looming lofty in the distance. 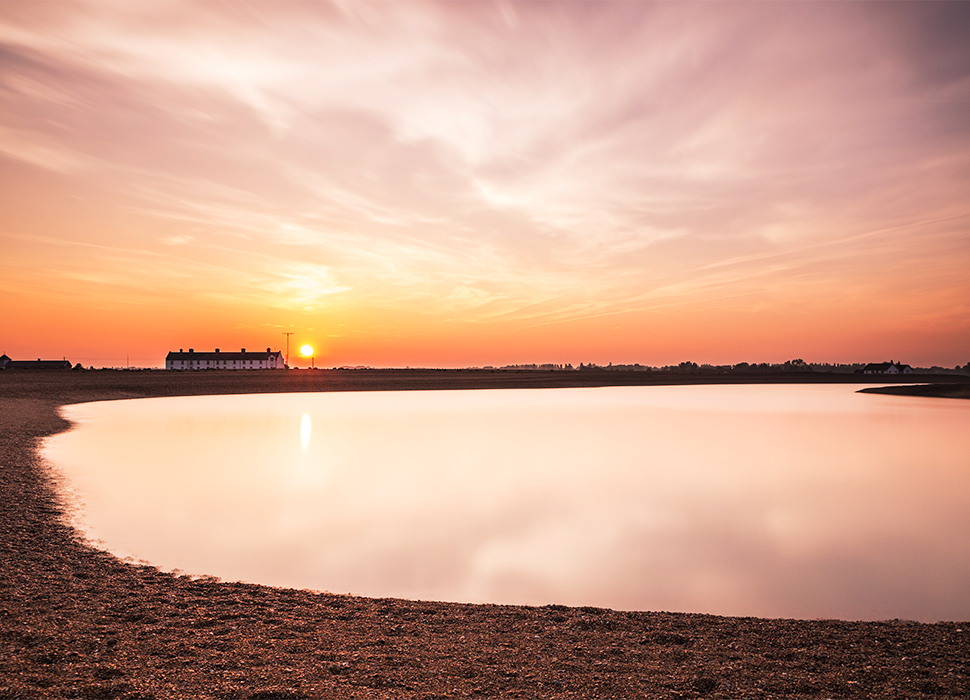 A schlep down to the dreamy shingle expanse of Dungeness is great, but look to Suffolk and you’ll find an equally idiosyncratic alternative in Shingle Street. Located southwest of the town of Woodbridge (90 minutes east of Stansted), the beautifully desolate bay at this coastal hamlet offers languid waters, an abundance of wildlife – tern and seals abound – and a fine piece of land art in the 275m-long line of white shells laid by a local stonecutter across the huge shingle beach in 2005. 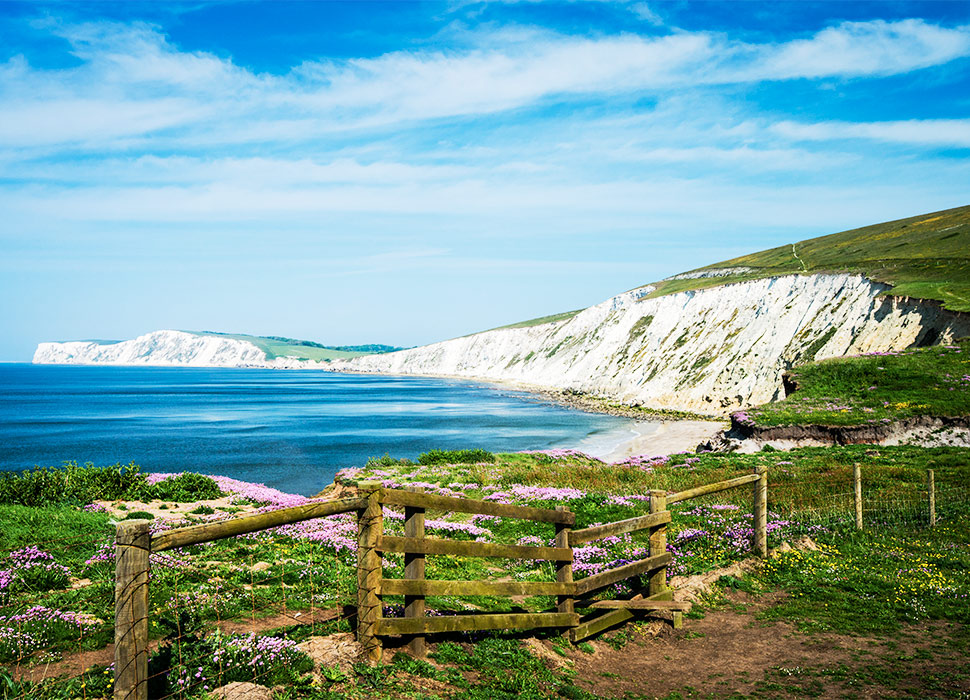 Looking west to Tennyson Down from the cliffs above Compton Bay / Image: Adobe Stock

The Isle of Wight is jammed with wicked beaches, but there are none more resplendent than the wild sands – and surfer’s heaven – of Compton Bay on the southwest coast. You’ve two points of entry: from the busier Hanover Point end, or the more tumbledown Compton Farm car park to the west. From the latter, clamber down a higgledy wooden staircase, past claypit-dotted cliffs strewn with wildflowers and you’ll hit a stretch of dark sand, the far reaches of which are fairly quiet even in high summer. Stay till sunset, when the view of the Tennyson Monument on the huge westward cliffs becomes truly divine. 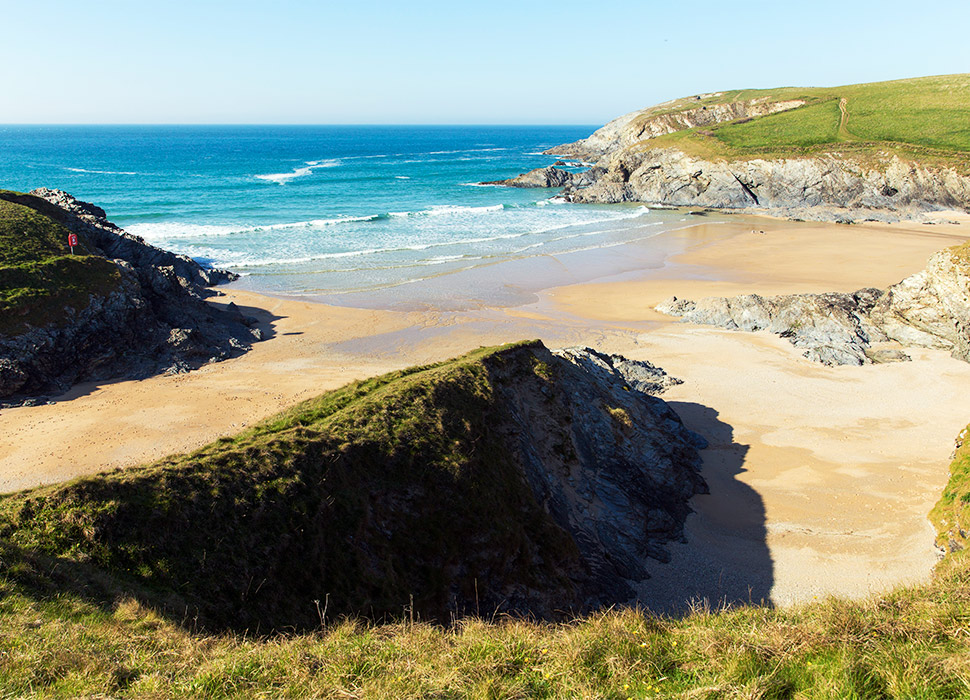 This West Pentire cove is a fine alternative to busy Newquay and Fistral / Image: 123rf

Set back in a deep cove at West Pentire, Poly Joke (or Porth Joke) is a golden, cave-dotted haven just a few miles west from the bustling, party-party surf resort of Newquay. Its serene vibe is helped by the relative lack of access – there’s a National Trust car park 15 minutes' walk away in the village – and facilities; it’s worth noting there’s no lifeguards here. Once you’re done in the waves, clamber up onto the Kelsey headland and eyeball the birdlife and seals around the uninhabited rock of Chick Island, before laying your head at the minimalist Porth Joke Campsite (though it can be hard to get a pitch in high summer). 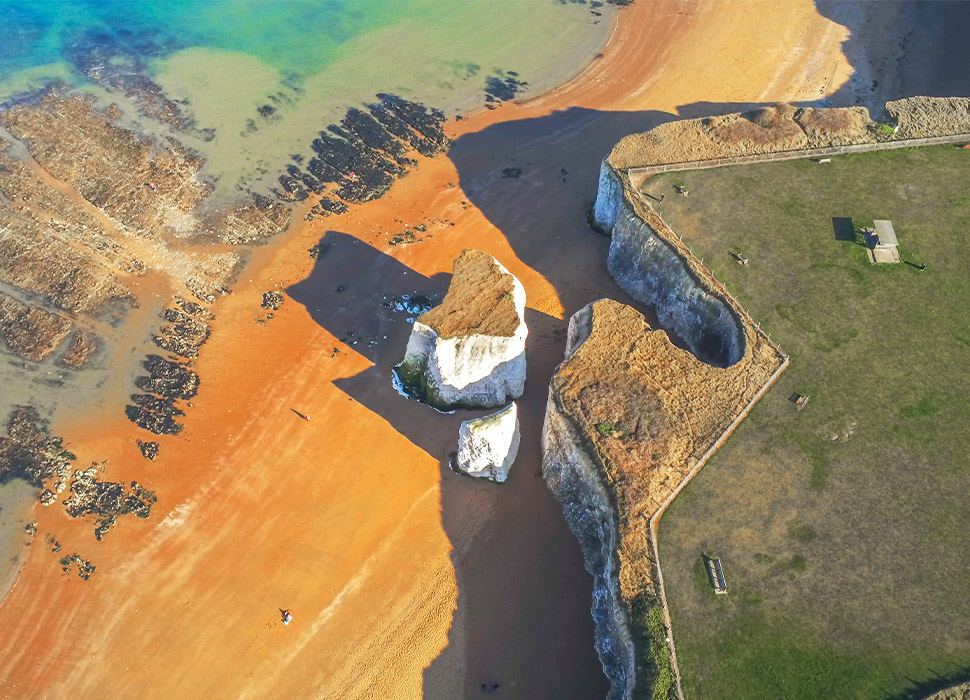 The hulking chalk stacks, abundance of fossils and myriad rock pools to explore are a fine fit for this adventurously named Kentish beach. It’s not unknown – there are lifeguards and a café/kiosk, and it’s been in numerous ads and music videos, for a start – but it certainly is the most striking on this stretch of coastline, between Margate to the north and charming Broadstairs just to the south. Beware: a high tide cuts off either end of the beach, but the seas are generally gentle enough to paddle if you fancy your own private patch of sand. 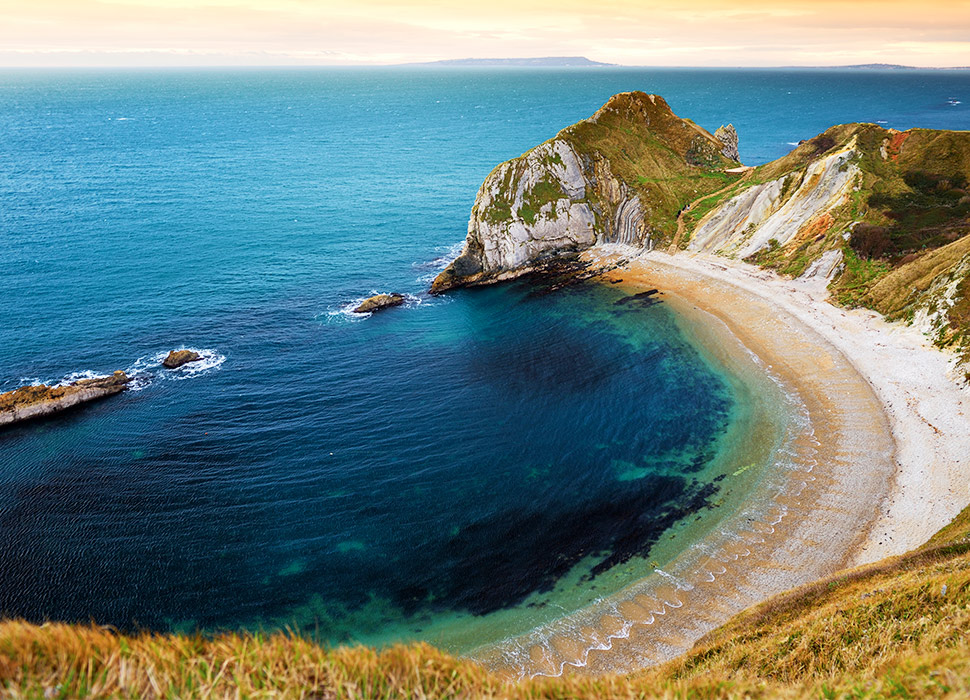 This angrily named bay is like Lulworth in miniature / Image: 123rf

Dorset’s Lulworth Cove is iconic for a reason (incredible beauty, mad geology and a provision of beachside cream teas will do that) but it’s also absolutely overrun on sunny days. Instead, head to Man O'War beach, a mile to the west, next to the lofty promontory of Durdle Door. It's a sort of miniature Lulworth, with shining waters and shingly sands protected by a horizontal reef, and the hordes are reduced by the precipitous 800m walk down from the nearest car park. 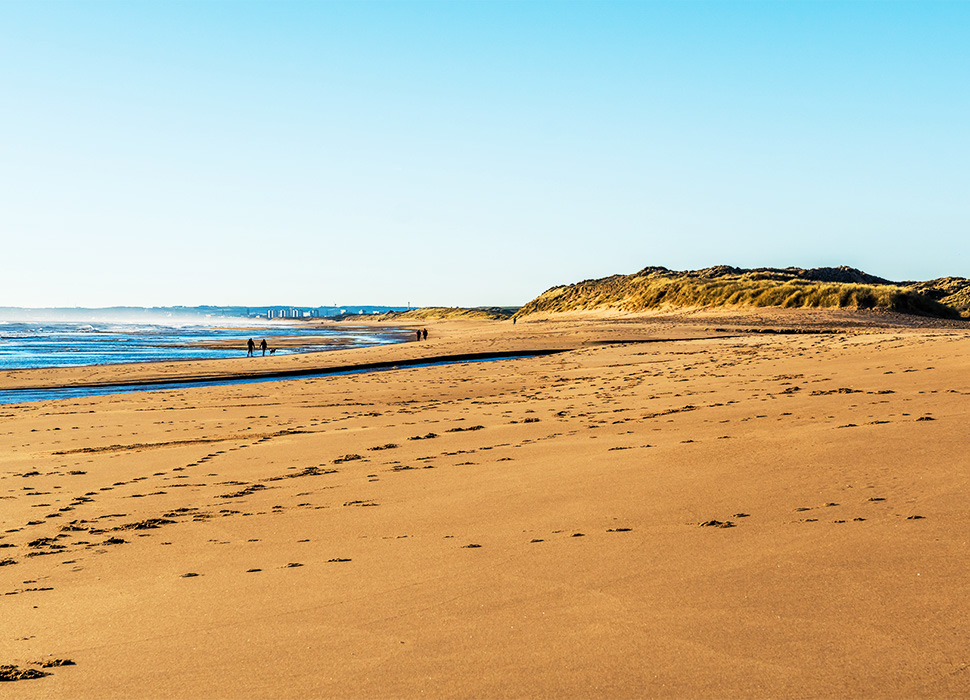 Eight miles up the coast from Aberdeen – and set within a marram-grass-covered complex of undulating dunes that stretch a further seven or so miles up to the Ythan Estuary – the picturesque expanse of Balmedie Beach rewards both lengthy ambles across the flat sands and bracing dips among the gentle breakers of the North Sea. As well as a plethora of wildlife – over 220 species of bird call the marram grasses home – the beach also holds historical intrigue in its status as a WWII ‘bomb cemetery’, where leftover ordnance was detonated on the foreshore (and where the fossils of pillboxes and anti-tank blocks remain). 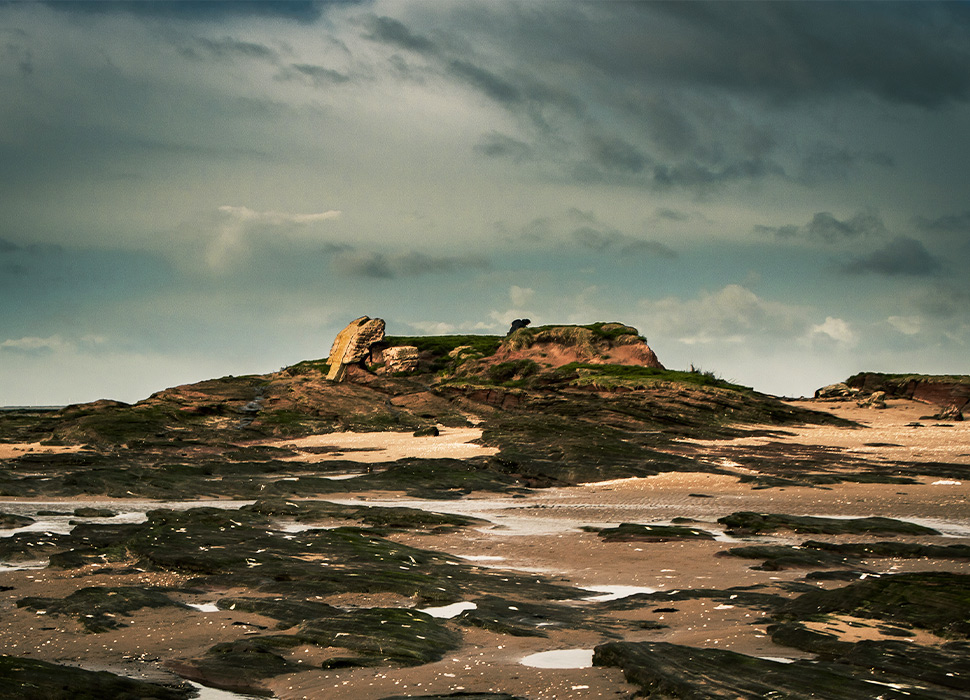 Trek across the Dee Estuary to reach this magical rock / Image: Adobe Stock

Merseyside’s windswept Wirral Peninsula is blessed with myriad beaches, though few come as thrilling as that stretching out across the Dee Estuary from West Kirby. At low tide, you can walk two miles out onto the sands, to the uninhabited Hilbre Islands – a beguiling place to picnic among the skerries’ lushly abundant flora and fauna. It’s essential to follow the specific route laid out on the Dee Lane Slipway, tracking round to Little Eye – past colonies of basking seals – and up via Middle Eye to the sunny coves, rockpools and old telegraph and lifeboat stations of Hilbre proper, with spectacular views of both the Lake District and north Welsh mountains. Leave three hours before high water to get back. 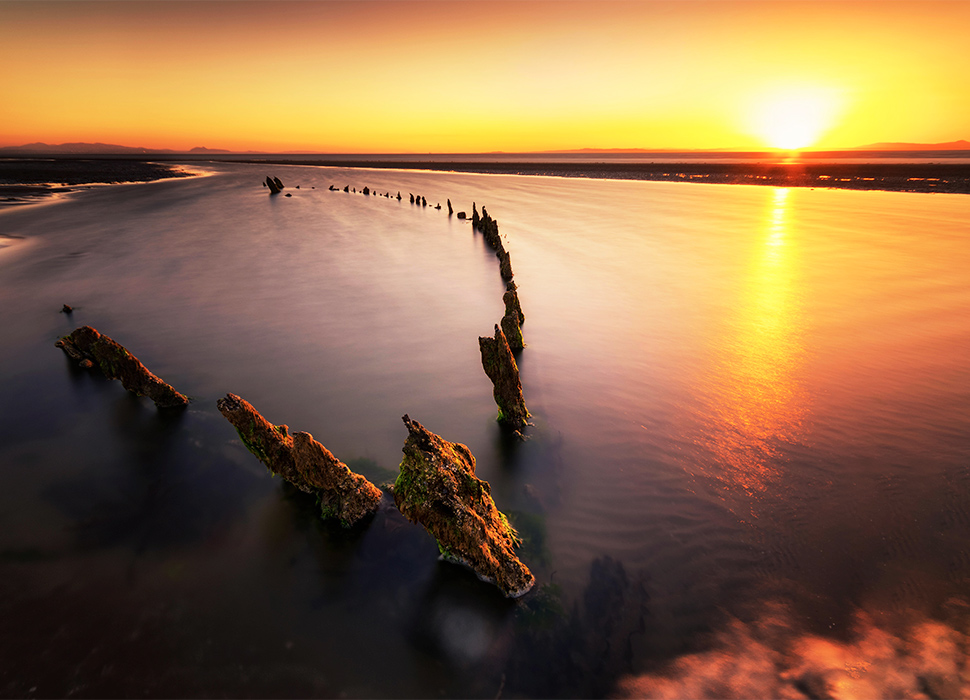 A skeletal boat in the retreating Forth waters / Image: Alamy

You’ll want to check the tides before visiting this pretty beach – which became the country’s first designated Local Nature Reserve in 1952 – as two-thirds of the area’s sands, mudflats and marsh fall below the water line when it rises. Still, the land above it is a delight, with boardwalks and narrow sandy paths navigating the reserve, leading visitors past fowl-filled wetlands (some 30,000 pink-footed geese stop off here on their autumnal flights from Iceland) and the Gullane golf courses to the sealine. Time it right and you’ll find the melancholy shells of two wartime midget submarines buried in the sands. Just don’t get cut off by the returning surf. 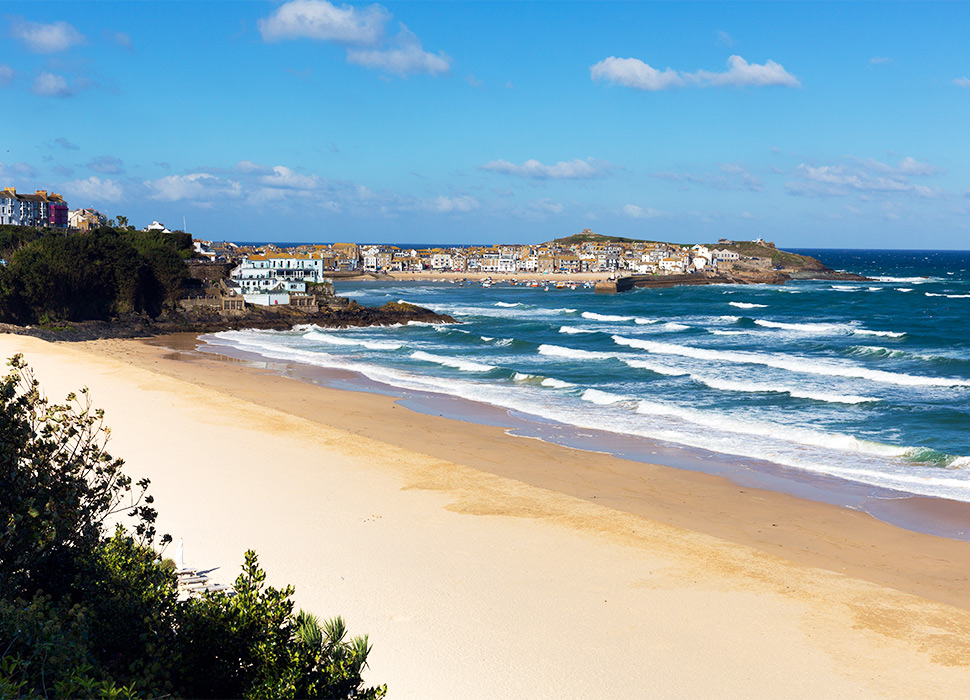 This gem of a bay is a hop from central St Ives / Image: Adobe Stock

Everyone will have heard of St Ives – the bougie gem of Cornwall’s coastal crown – but a mere hop from its centre lies Porthminster Beach: a Blue Flag-touting hotspot with less column inches to its name. Boasting the mildest climate in the UK, with soft sand, palm trees and impossibly blue waters, it’s bookended by St Ives Harbour and the equally easy-on-the-eye Carbis Bay. Flex your putting muscles with a jaunt round Porthminster’s beach-adjacent mini golf course and then settle in for fresh seafood with an Asian-influenced twist at the celebrated Porthminster Beach Café. 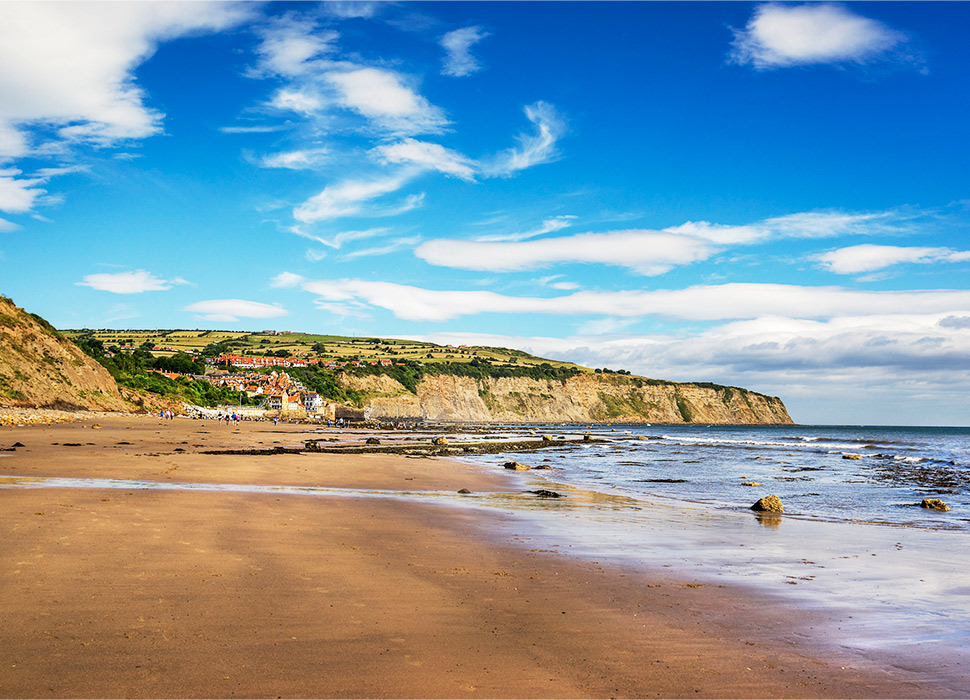 While the quaint enclave of Robin Hood’s Bay – an old fishing village filled with cobbled streets and a craggy, windswept beach – is more than worthy of a visit in itself, the seasoned North Yorkshire Moors traveller will know there’s only one way to do this section of the Heritage Coast properly. Kick off at Whitby and walk the coastal path for maximum scenes of bracing natural beauty; by the time you arrive at the Bay (allow around three hours for the seven mile walk), you’ll be champing at the bit for a pint and a mooch around the locally-owned businesses of the area. 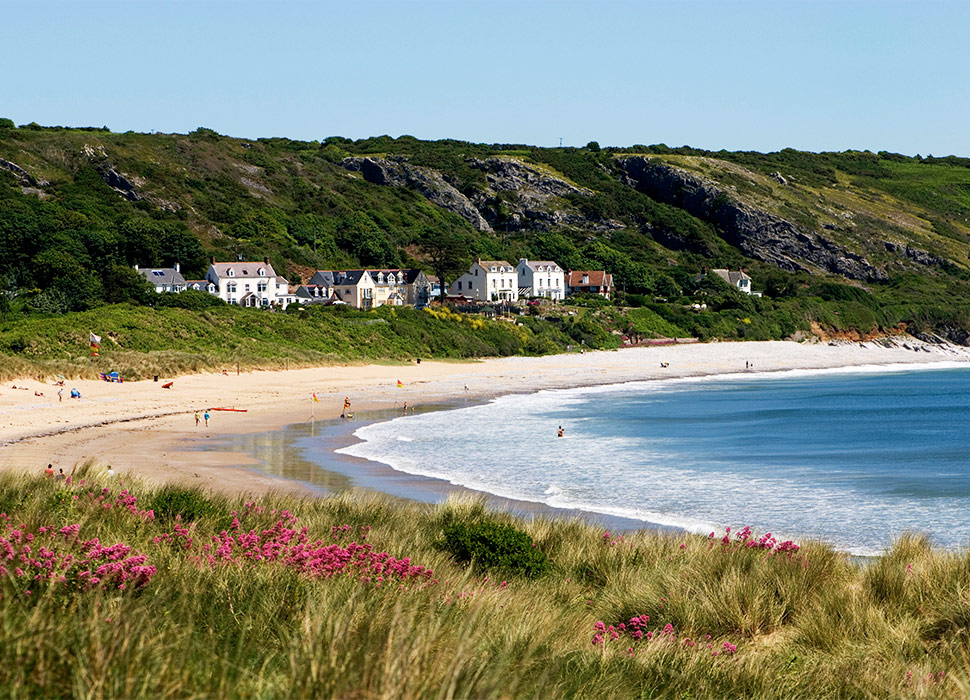 Designated the UK’s first ever area of outstanding natural beauty back in 1956, Swansea’s Gower Peninsula remains a hotspot for surfers, walkers and happy paddlers alike. Alongside the likes of Rhossili Bay, take time to stop off at Port Eynon: a family-friendly spot with a rich history of oyster fishing and smuggling. If you’re travelling with a hound, be warned however – dogs are restricted in certain areas of the beach between May and September. But if you’re planning on getting your bodyboard on, then maybe you’re best leaving Fido at home anyway… 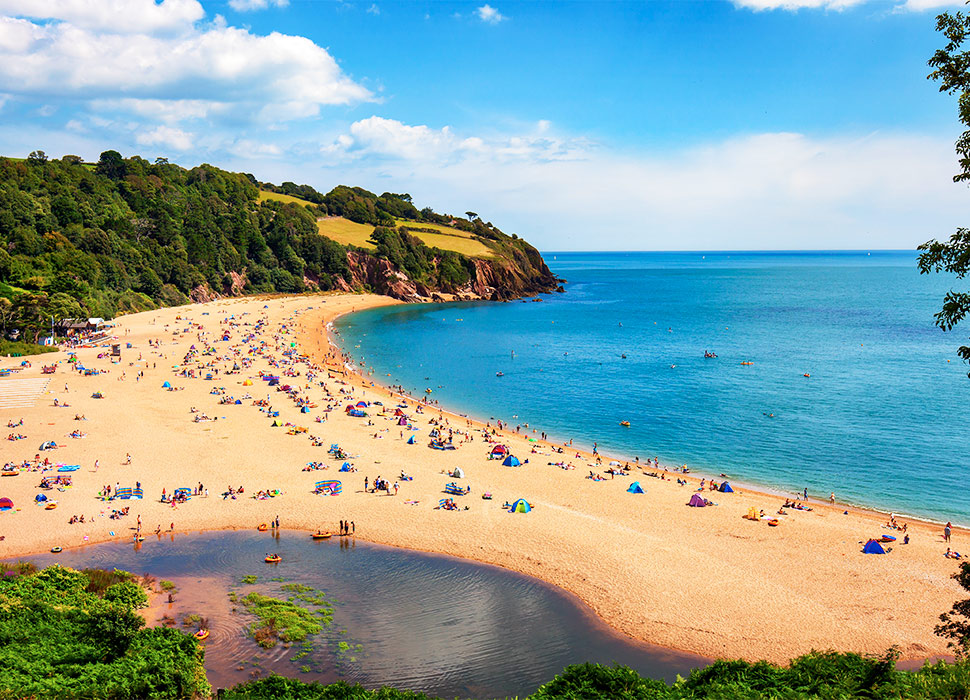 Ignore the misnomer – this is a stony south-coast classic / Image: Adobe Stock

While the name Blackpool might conjure up images of sticky-fingered children running wild on the Pleasure Beach, the area’s neighbouring Blackpool Sands is a far calmer affair, set in a tree-lined, sheltered bay. For those still after their fair share of thrills, kayaks and paddle boards are available to hire, while summer 2022 will also see them host cinema events and a music festival on the beach. Just don’t go expecting actual sand in the Sands: this spot is a shingle-only affair. 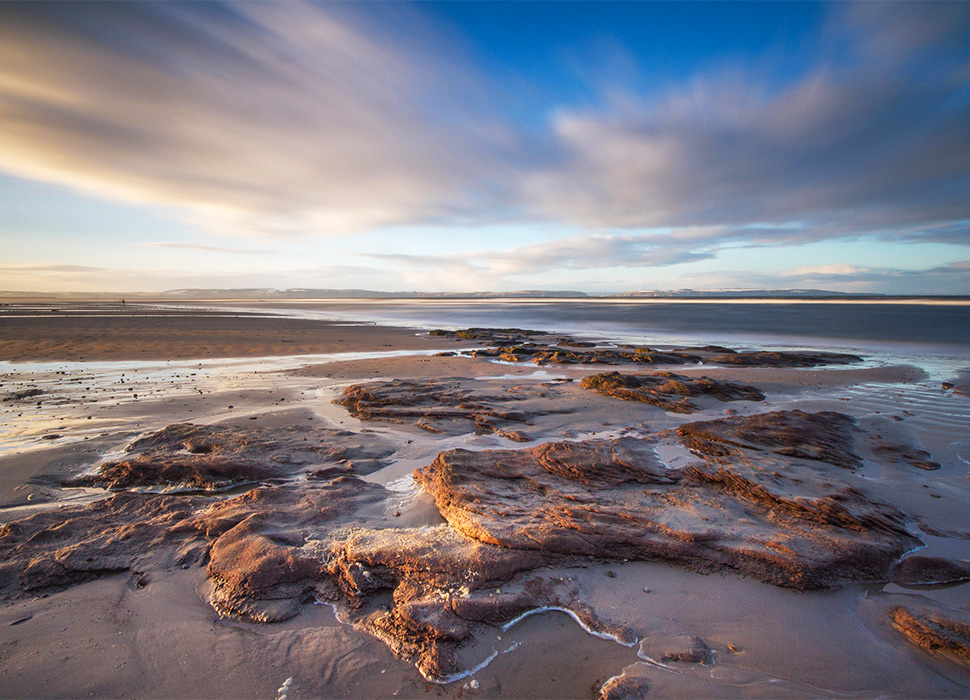 The secret may be slowly getting out about Nairn Beach – located around 16 miles east of Inverness and stretching from the harbour to the neighbouring golf club – but you can’t blame people for wanting to get a piece of its magnificent Scottish action. Exhibit A: the coastline boasts a local school of dolphins, which can often be seen bobbing about from the shore. Exhibit B: during the winter months, not only can you peep snow-capped mountains from the sands, you might even catch a glimpse of the Northern Lights. Sure, sandcastles are great an’ all, but that’s what we call a fully-rounded seaside experience.