The best places to ski in the UK

You don't have to schlep all the way to the Alps for alpine powder, you know. From low-key Lake District slopes to towering Cairngorm cliffs, these are the best runs in the UK

If the stars align and the snow gods shine down on us, skiers and snowboarders of the UK rejoice. Because here, on these fair shores, are some truly unique and adventurous places to ski.

Mainly clustered around our highest peaks in Scotland and the north of England, the Brecon Beacons in Wales deserves a mention too – even though there isn’t a fixed rope tow there, many people will hike up Pen-y-Fan if the conditions are right.

These spots may not have the amount of terrain, or the range of accommodation or après you’ll find in the Alps, but they’re here, on our doorstep, and couldn’t be more authentic if they tried.

After a slightly-less-alternative alternative ski resort? These are the finest ones in Europe.

If it's more specific lines you want, here are the most spectacular ski runs in Europe. 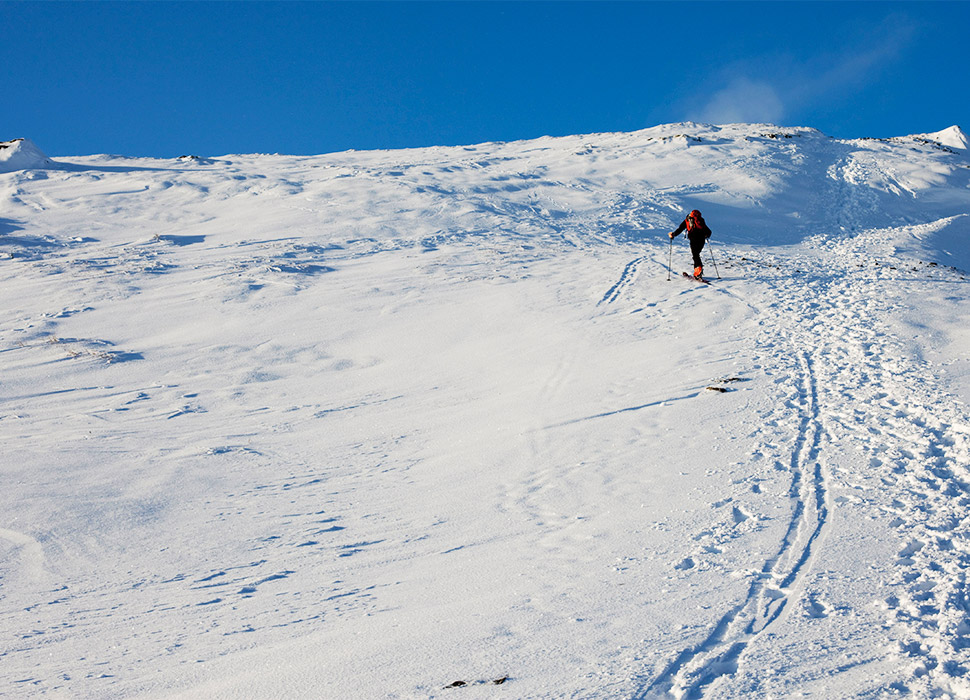 On a remote fell next to Helvellyn in the Lake District is Raise, home to the Lake District Ski Club. Founded in 1936, it operates a 360m rope tow that accesses up to nine ungroomed runs – if conditions are playing ball, the longest is nearly a mile long. Accessed by walking for well over an hour through snow-covered mountains from the YHA in Glenridding, strap your skis or board to your back and be rewarded with fresh tracks and a warm welcome at the cosy members’ hut. Do check access with the club, as they only intermittently accept day visitors. 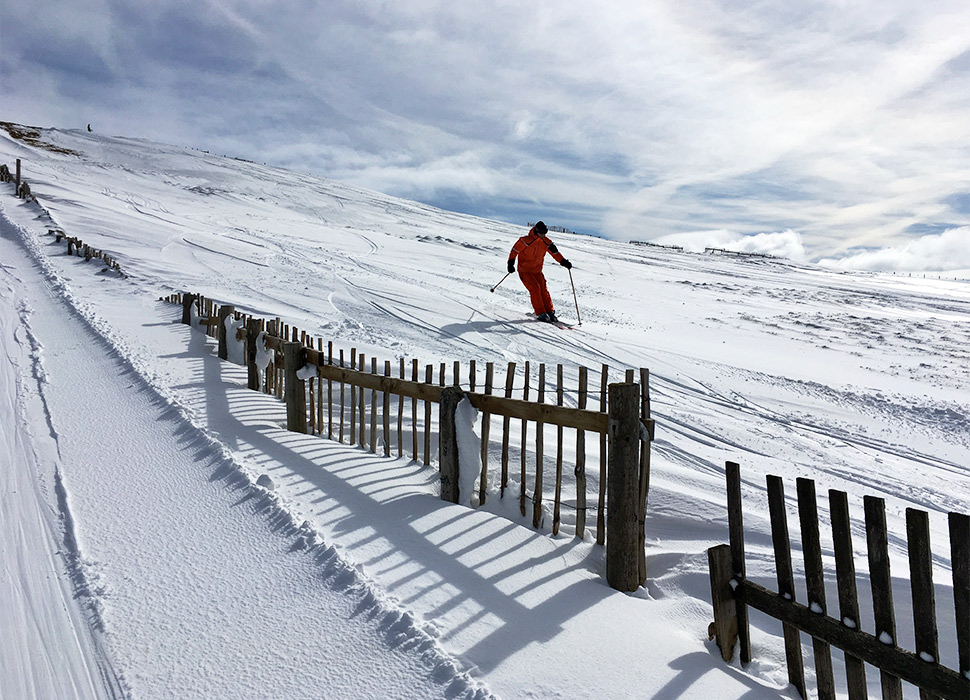 A strong community keeps enthusiasm levels high at Yad Moss, a spot of skiing in the North Pennines Area of Outstanding Natural Beauty with over 4km of intermediate slopes and plenty of off-piste opportunities, all served by a 600m proper Poma lift. Park up on the B6277 between Middleton and Alston, walk uphill for 10 minutes and you’ll be at the ticket office and club room. Bring your own kit – there is no ski hire or lessons here, just devotees who’ve been making the most of winter since 1975. 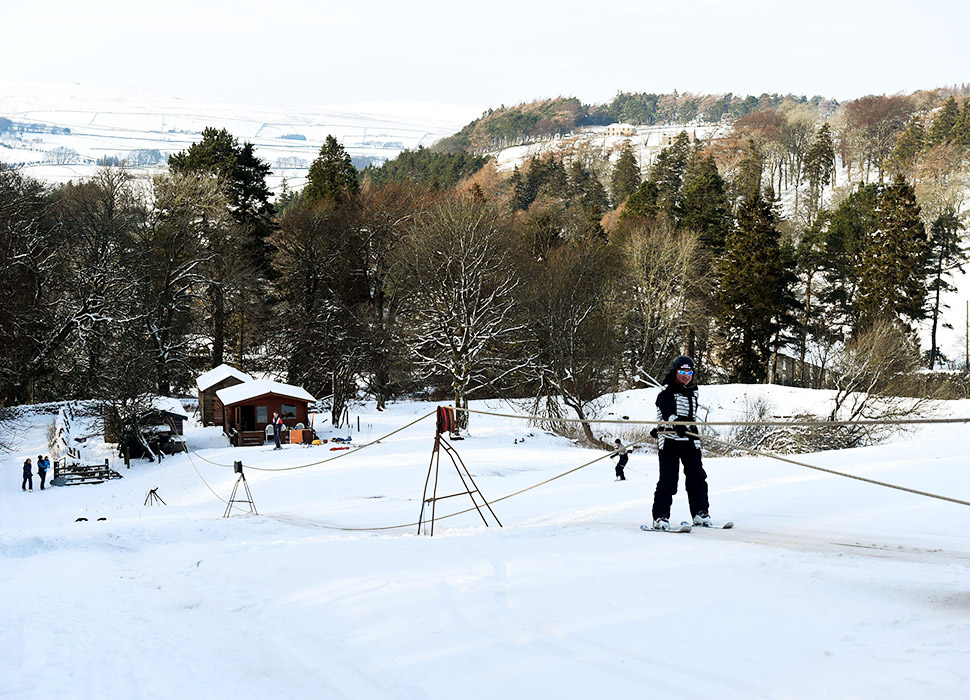 High up in the North Pennines, outside the ancient lead-mining village of Allenheads, is not one but two 100m tow ropes – unheard of in these parts – plus several portable tows. One of the most accessible ski areas in the north of England, its access road – the B6295 – is reliably kept clear of snow in all but the worst conditions. Once on the hill, there are several runs both across open meadows at the top and a wooded area at the bottom, and suitable for all abilities. 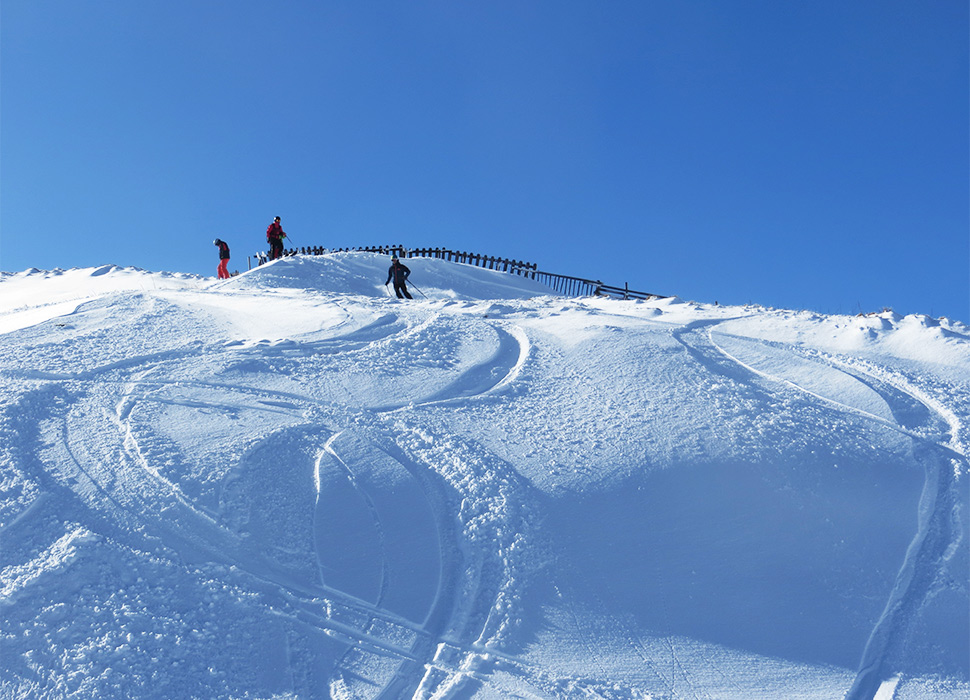 Weardale offers the most epic skiing in England

When conditions are right, a day at Weardale is as epic as they come in England. With two permanent button tows carrying skiers a distance of 787m up to the summit – at 650m – of Swinhope Moor and its north-facing bowl, there are six or seven recognised runs plus plenty of off-piste opportunities and even some natural snow parks. You know Weardale is serious about its snow as it even has its own piste basher. Fitting for the place with the longest lift-served ski run in England. Only one problem – they're only allowing access to members for 2021/22 (and even when they're not it can take a 4WD with snow chains to reach). 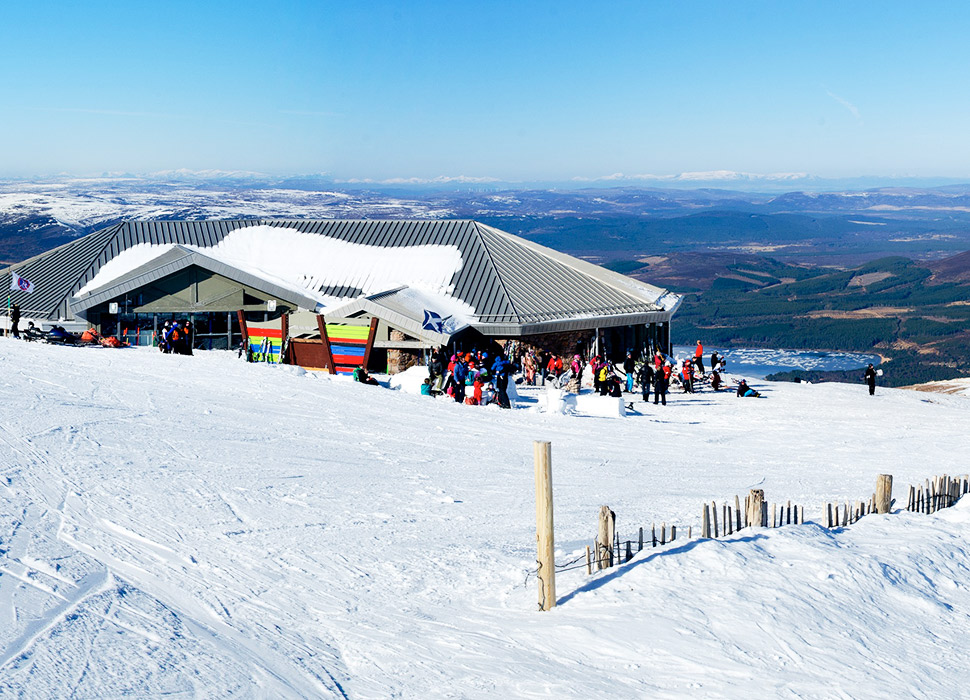 Boasting the dubious claim to fame of being home to the highest Starbucks in the UK, Cairngorm Mountain has a lot more going for it than that. The most snow-sure of the three resorts in the Cairngorms, it even has snow cannons to help with coverage at the beginners area, and plenty of variety within its 30km of slopes. Highlights are the steep East and West Walls, the terrain park and the 3.5km easy green slope from the top of the Ptarmigan T-bar to the Day Lodge. 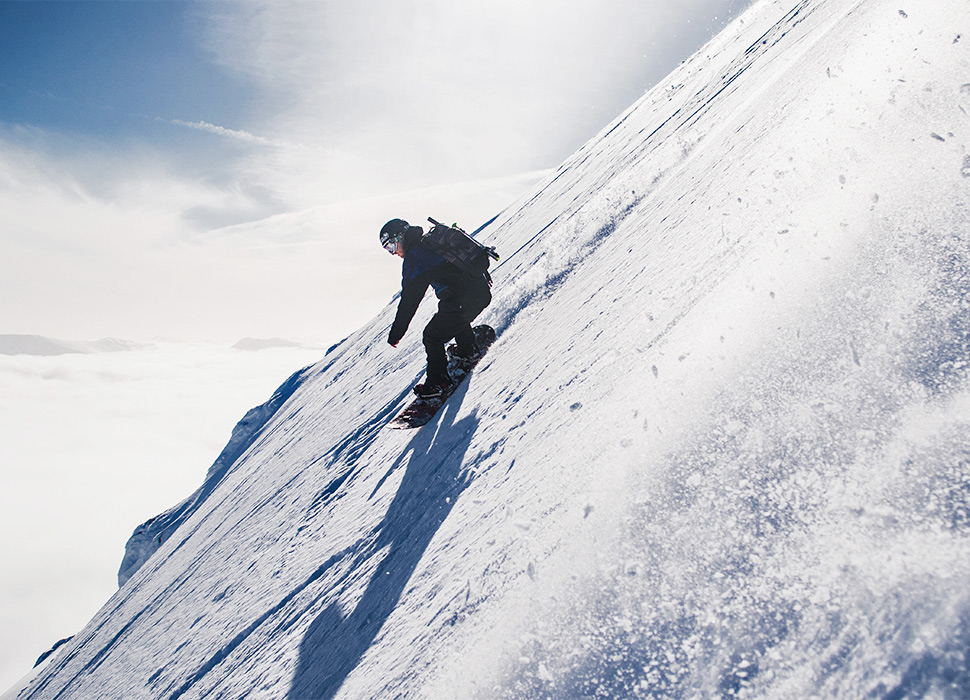 With views of Buachaille Etive Mor and Ben Nevis in the distance, Glencoe is Scotland’s oldest ski resort. Now home to eight lifts, there’s a great beginners' area in a natural bowl from a plateau at mid-mountain, plus the steepest slope in Scotland, the Flypaper, and an avalanche transceiver training park. Slopeside accommodation is available at the 16 Microlodges, small well-insulated huts sleeping up to six – bear in mind in the depths of winter the shower and toilet block is a chilly dash away. 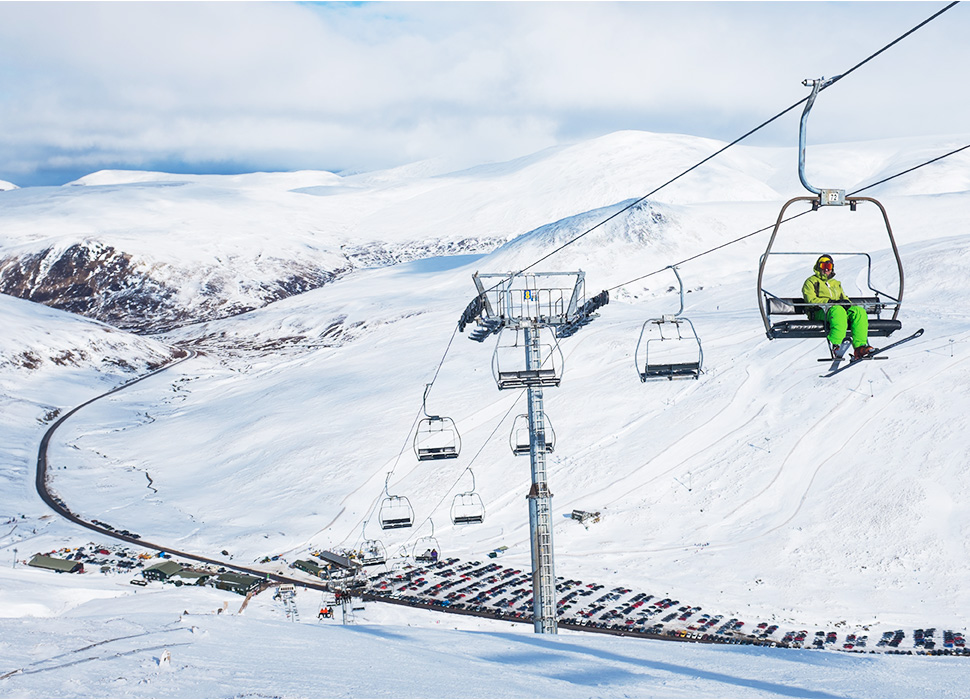 Glenshee Ski Centre is the closest thing to an Alpine resort in the UK / Image: Steve MacKenzie

Glenshee takes all the superlatives – it’s the largest ski resort in the UK, with a total of 40km of pistes, and has Scotland’s longest intermediate run, Trident Gully. And it has the biggest area of family-friendly terrain. It’s got the most Alpine feel of all the UK places, too – with a rental shop on-site, as well as a ski school, a buzzing café selling burgers and beers, and an outpost of Disability Snowsport Scotland for more accessible skiing. 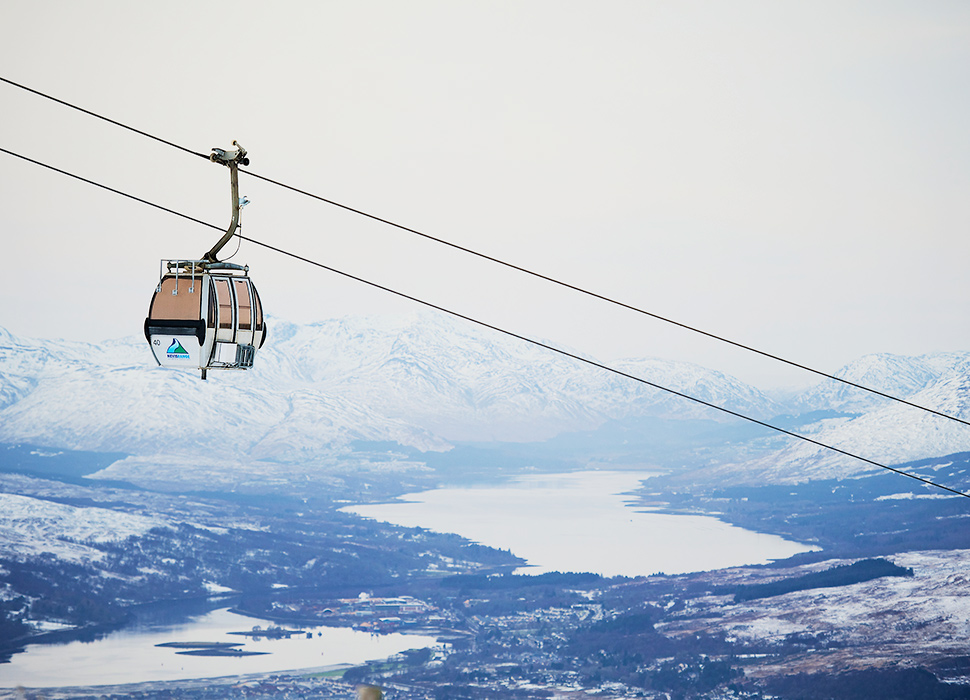 Home to the UK’s only mountain gondola (the one across the Thames doesn’t count), Nevis Range has the highest skiing in the UK, with slopes up to 1,221m on Aonach Mòr. With some proper backcountry terrain under Lemming Ridge and served by the Braveheart Chair, they’re known as the Back Corries and are the most fun you can have on snow this side of the Channel. The set-up for beginners is great, with a bunch of gentle runs next to the Snowgoose Restaurant at the top of the gondola. 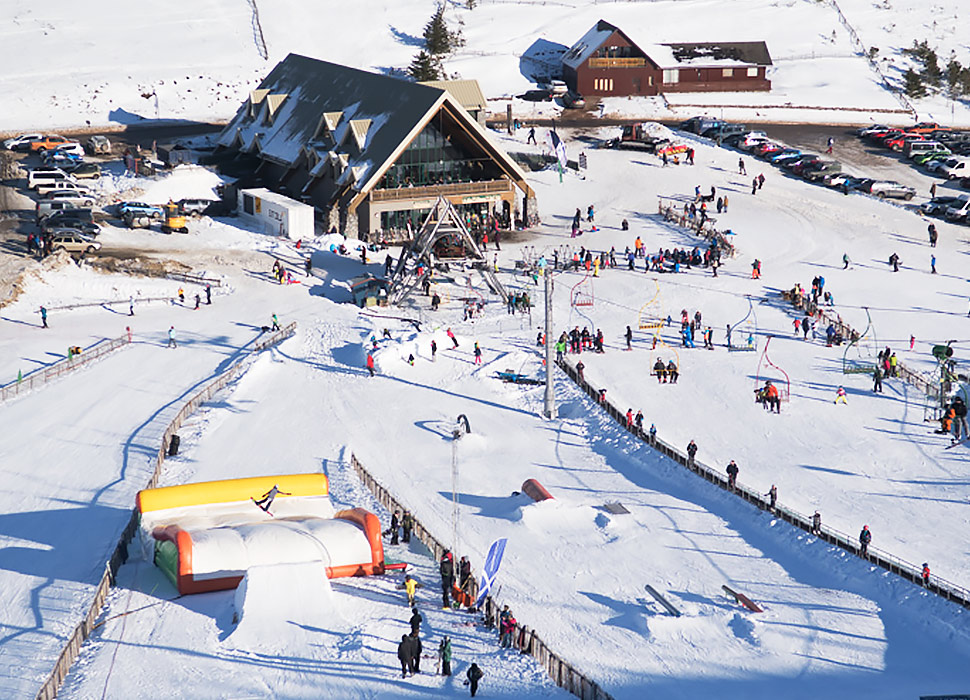 Joining Glenshee and Cairngorm Mountain in the Cairngorms National Park is the Lecht, a sizeable place with 20 runs, 14 lifts and gorgeous scenery around the Beinn a' Chruinnich and Meikle Corr Riabhach mountains. Popular with families, it has the Penguin Park, a dedicated space for children aged two-to-eight to safely learn in, plus a magic carpet lift and a carousel to help develop balance. For grown-up kids there’s a terrain park with jumps and rails, and the short but steep Harrier black run. 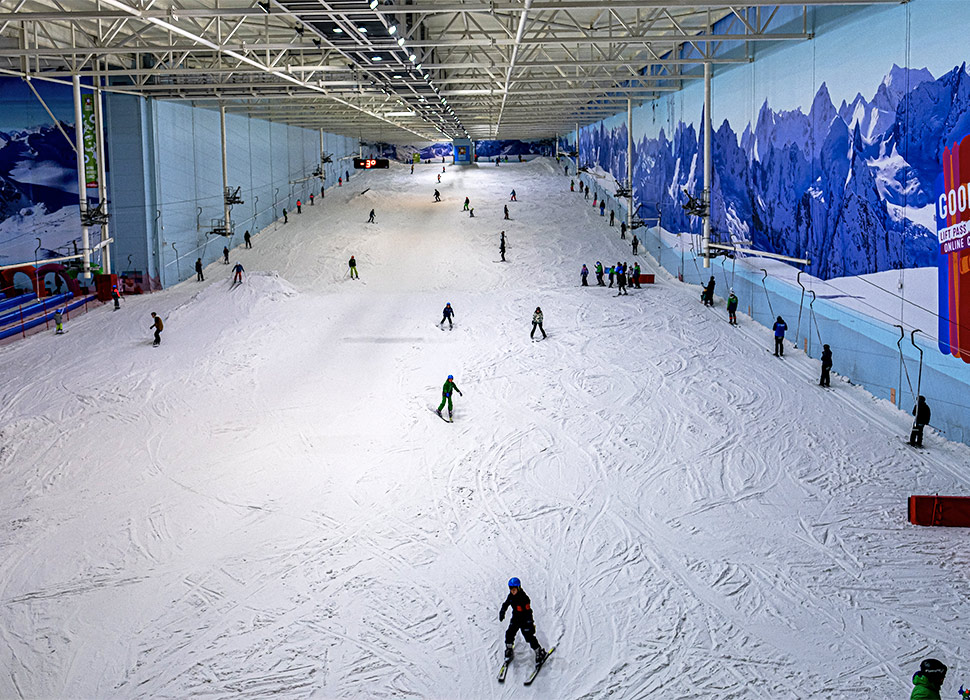 A round up of the best places to ski in the UK wouldn’t be complete without including at least one of the indoor snowdomes. There are six of these giant warehouse-sized refrigerators keeping real snow fresh across the country, and the Chill Factorᵉ is the biggest – its slope is 180m long. Brilliant for learning or training on, the temperature is an authentic -1º to -5ºC and pictures of real mountains cover the walls to add to the alpine atmosphere.

The 10 best ski resorts in Italy