The UK's best llama (and alpaca!) farms and treks

Taking a cute camelid for a peaceful stroll in the country is all the rage this summer. Here are the best ethical places in the UK to meet these alluring animals

Yearning for some back-to-nature escapism? What you need is a llama, a lead and a few meandering country trails. Llamas (and alpacas) have stolen the hearts of animal lovers across the UK, and there are now dozens of farms offering meet and greets, therapy sessions, gentle hiking or longer treks with these wide-eyed, shaggy camelids. Here’s a handful of the most scenic spots to do it in the United Kingdom. 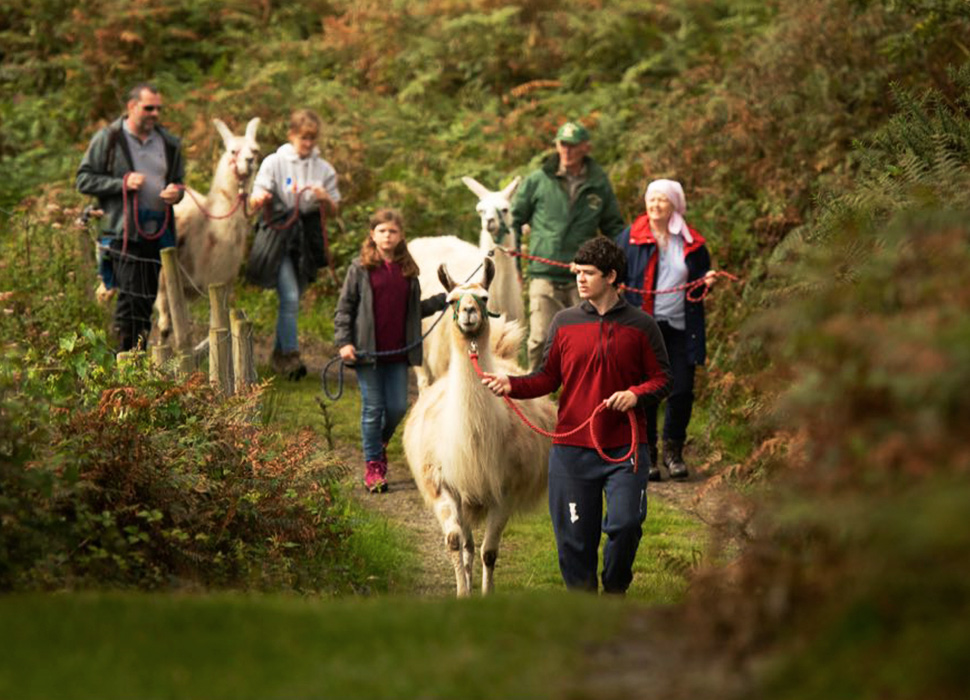 Fun fact: at Black Rock there’s a llama called Caspa who's a two-times Guinness World Record holder for high-jumping. He’s just one member of the team trained to tackle relay obstacle courses. When they’re not limboing and zigzagging, the llamas also go out on gentle treks through the valleys of North Wales. The centre is in a prime hiking spot, on the fringe of Snowdonia National Park and close to the Italianate village of Portmeirion. 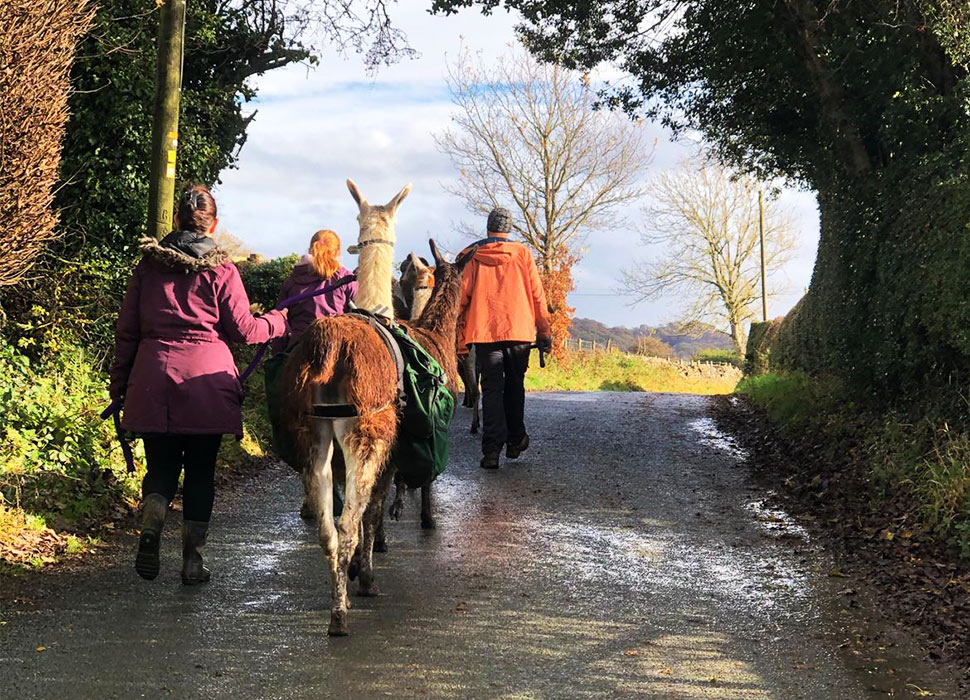 Taking a view of the Dales with a Nidderdale llama 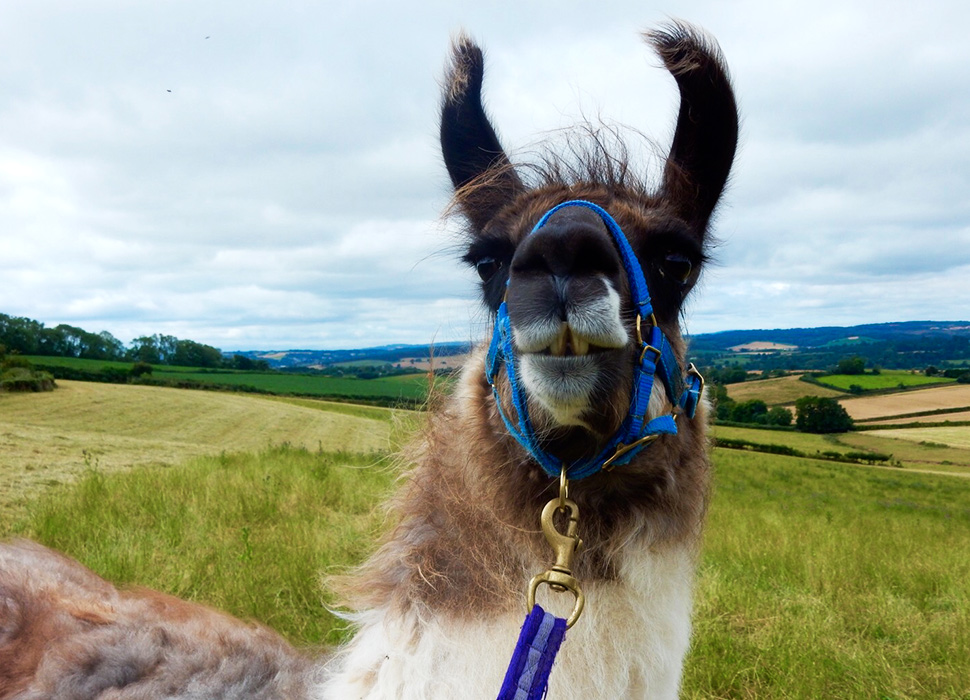 The tête-à-têtes at Peak Hill are deliberately set at a slow pace so that participants can get to know the individual personalities of their llama walking partners while admiring the Jurassic Coast sea views. If you’d rather not walk, there’s also a ‘Meet and Greet’ option where fans can marvel at the llamas' thick eyelashes while learning about their hedgerow-nibbling habits and natural guarding instincts. Peak Hill is set on a 330-acre working sheep farm with an on-site farmhouse B&B. 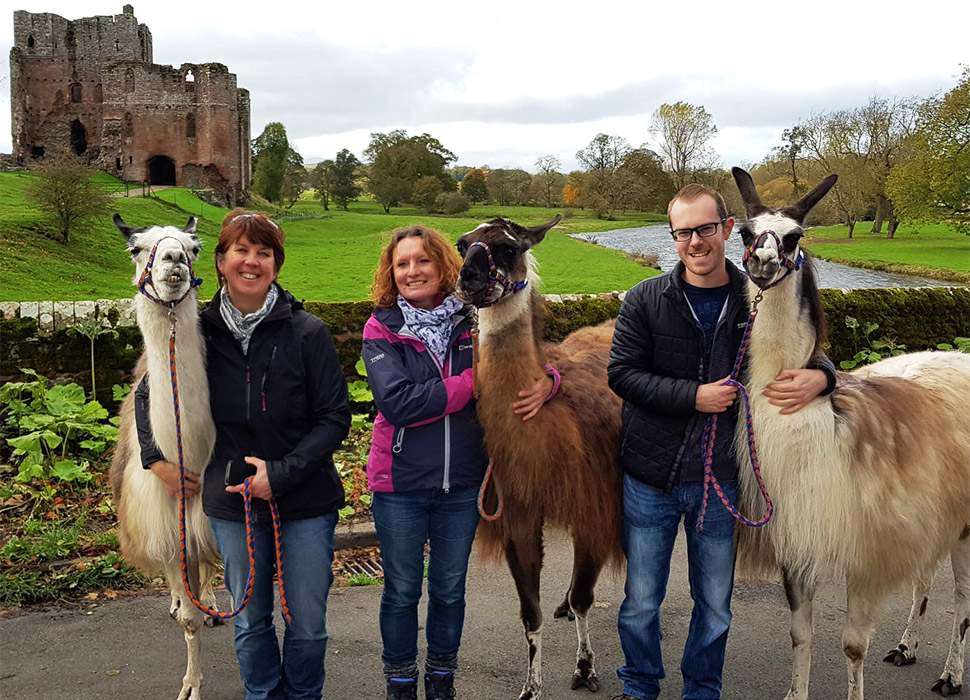 Fell views trickle down to a woodland trail, past a swathe of village green and beside a soothing stream on countryside treks with this llama farm. The scenic backdrop is part and parcel of the farm’s location in an Area of Outstanding Natural Beauty on the northern edge of the Lake District National Park. Treks last from one hour to half a day, and coffee and cake from the farm’s Llama Karma Kafe is an optional extra, served in an orangery overlooking the llamas’ grazing paddock. 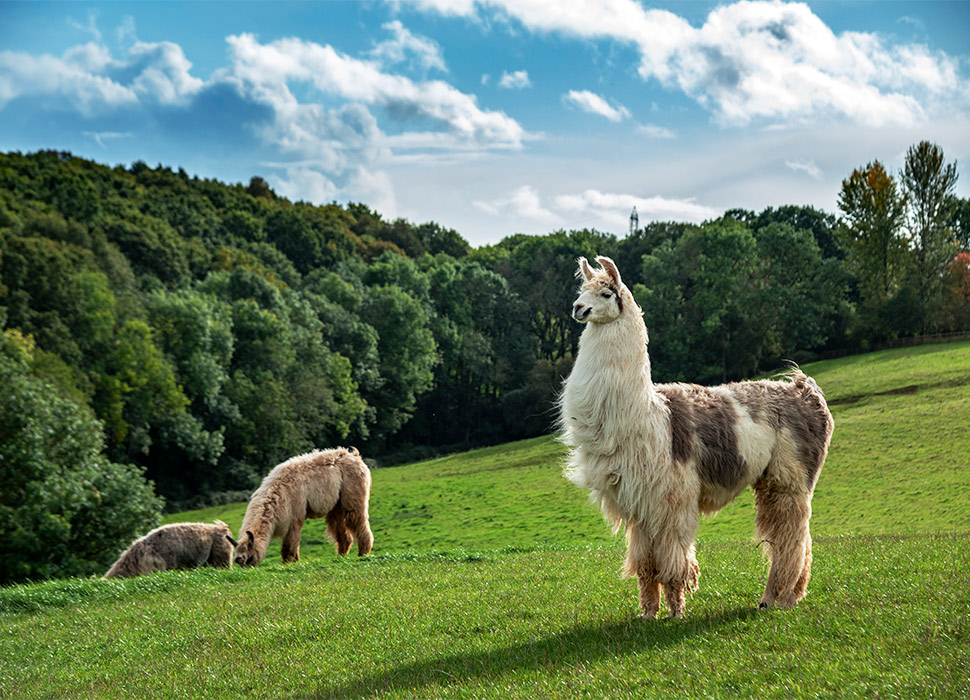 A hillside sentinel near the Malverns / Image: Briery Hill Llamas

Between the honeypots of the Malvern Hills, Wye Valley and Forest of Dean, Briery Hill in Newent offers llama treks with the added bonus of farm accommodation available in either the Granary or Shepherd’s Hut. The 90-minute encounter starts with a brief introduction to llamas and grooming time, before heading out for a scenic roam. Opt for the package that adds on a classic cream tea with Devonshire scones and clotted cream, taken in a summer house with views over the Malvern Hills. 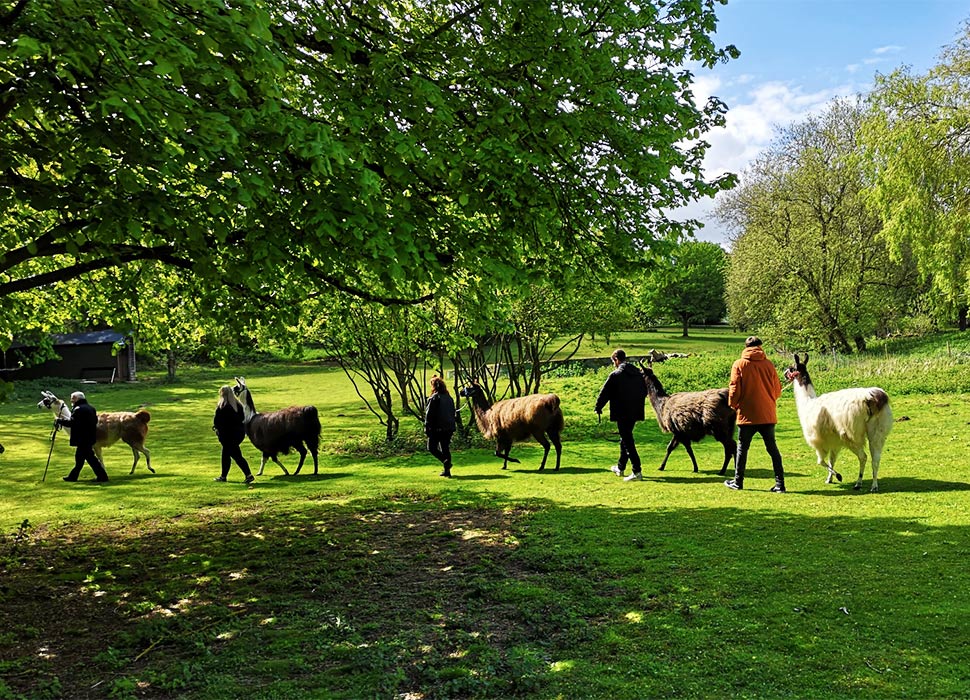 Llamas on parade at this former wildlife park

This llama stomping ground is set in what used to be Norfolk Wildlife Park. It’s now a private nature reserve, encompassing 25 acres of rippling parkland rich in birdlife. Visitors get to choose a four-legged companion from the herd of eight, try their hand at grooming then lead their llama on a short obstacle course before setting off for a walk across the fields. The experience includes refreshments and lasts around two-and-a-half hours. 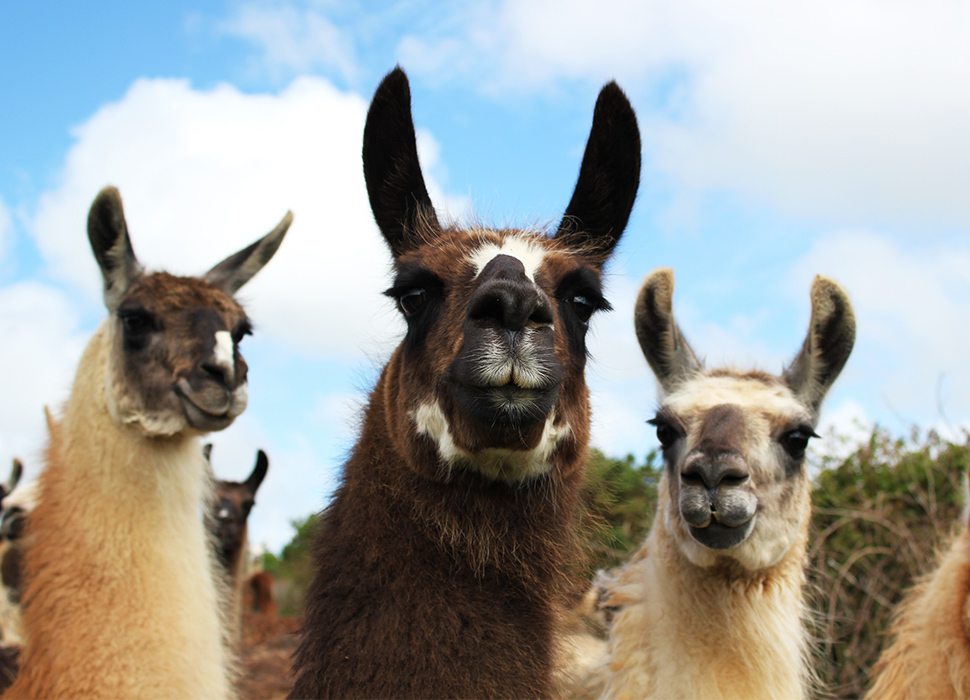 What you lookin' at?

The Tripp family have owned 140-acre Penare Farm near Truro for more than a century – and there’s been a herd of llamas here for 20 years. Their three-hour walks amble through thousand-year-old woodland and are remarkably good value, also including lunch and a Cornish cream tea. This is also one of the only llama experiences in the UK to allow children of any age (most state kids over seven or eight years), though under fives can’t walk their own llamas. 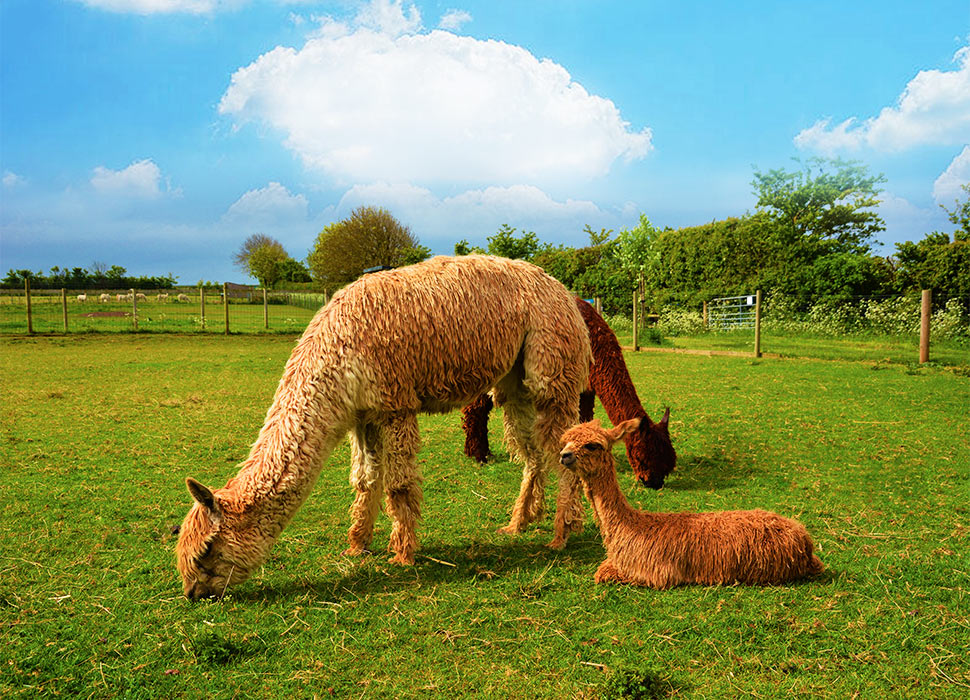 These alapacas are all Wight

Alpaca or llama? That’s the first question you need to tackle before choosing your trekking companion at this 23-acre farm on the Isle of Wight. The beauty of walking with both is that you’ll get to find out what the major differences are between these camelid cousins. All the walk leaders here are highly knowledgeable and can educate you as your journey unfolds across fields around the lovely village of Wellow. There are miniature donkeys, pygmy goats, rabbits and Golden Guernsey goats to see during your visit, too. 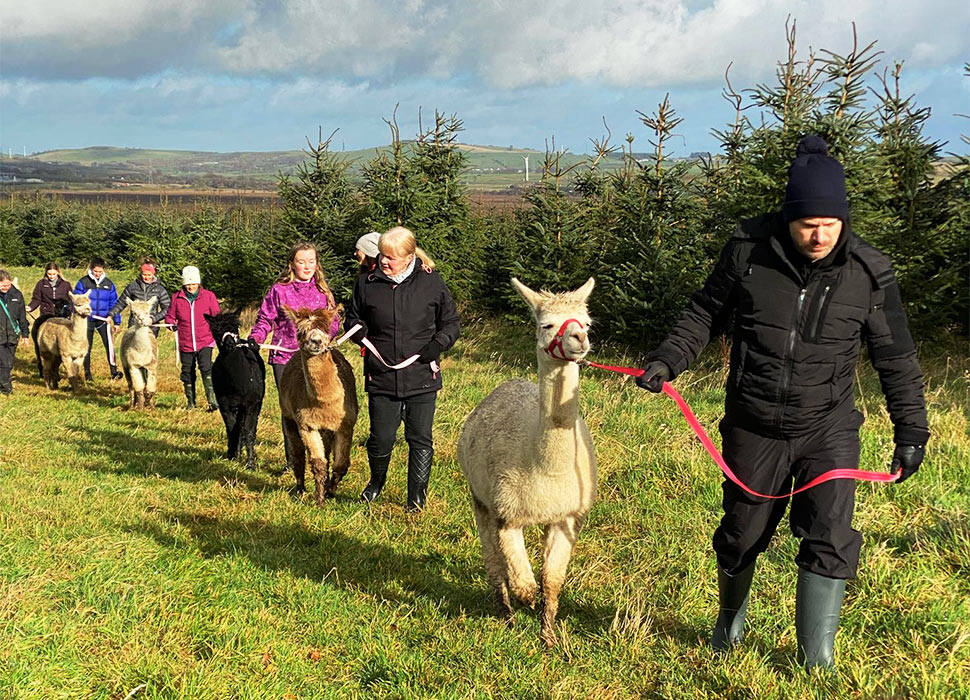 Don't worry, you're not being fleeced

The experience at Netherfield, 30 minutes south of Glasgow, is unique for being part trekking, part textile tour: if you want to know how Scottish alpaca fleece is being worked to create artisan yarn, is the place to come. Two-hour tours include an hour of walking with the alpacas and an hour learning how your gentle companion is keeping knitters in business. Mini-treks are also available for smaller children and those who want to skip the textile element.