White sand beaches, swaying palm trees, gargantuan caverns – and no passport required. These travel must-sees are all in the UK and a (very) short flight away

Half the fun of travelling is taking in the unusual scenery of a distant unknown land and getting an eyeful of people and things that you simply don’t come across at home. Except, if we look a little closer, maybe we can find landscapes just as ravishing right here in the UK – not to mention natural marvels every bit as, well, marvellous as those you stumble on abroad.

Here’s our pick of the places we think are so striking you almost can’t believe they’re here – they're not only in the UK, but also really handy for a domestic airport. 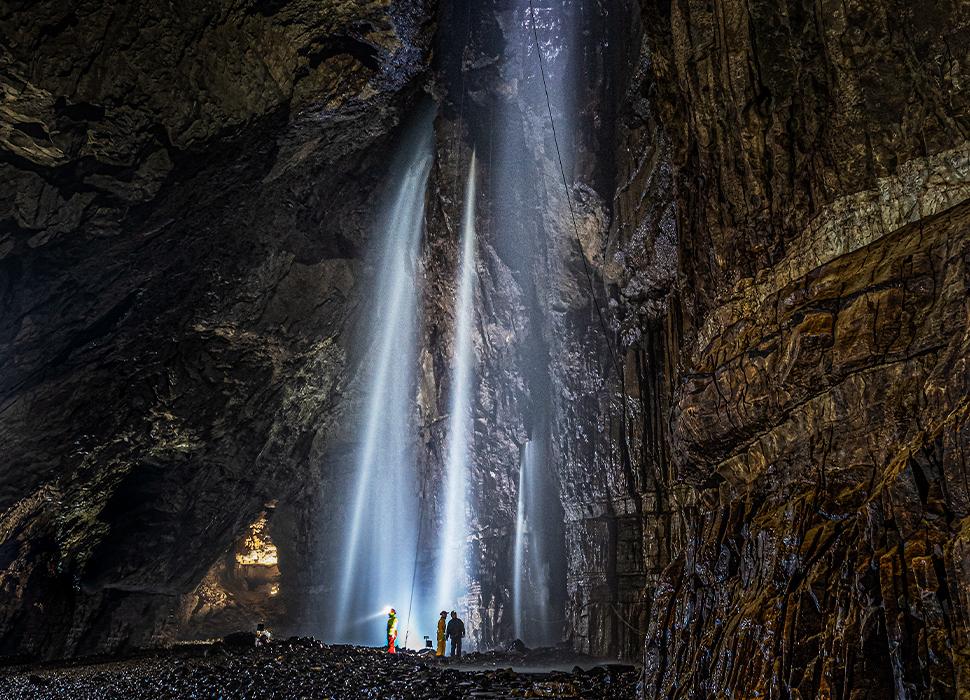 The UK’s largest underground cave chamber could easily fool unsuspecting travellers into thinking they’ve wandered out into the wilds of Iceland or the Dwarven realms of Tolkien’s Middle Earth. In fact the colossal void of Gaping Gill – roomy enough to comfortably fit a full-scale cathedral – is in the heart of the Yorkshire Dales, with delightful, bluntly named points of ingress like ‘Rat Hole’ and ‘Disappointment Pot’. The Fell Beck stream flows into the chamber, creating the nation’s highest unbroken waterfall, and proper climbers are on hand to help you marvel at it from a sturdy platform each spring and late summer. 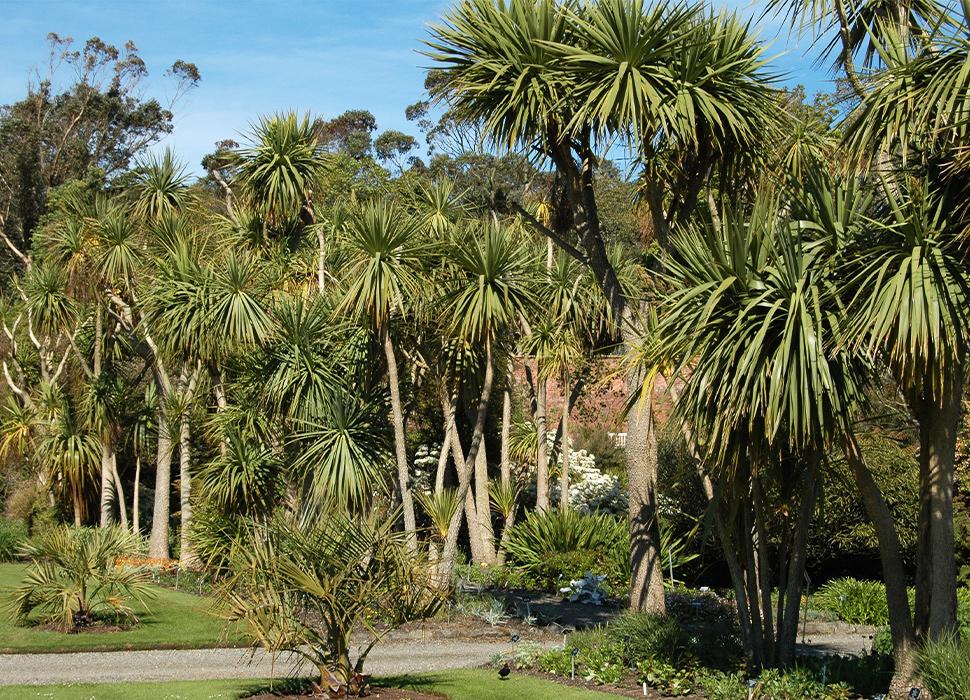 Not the Indian subcontinent, but deepest Scotland / Image: Logan BG

You probably don’t much associate Scotland with subtropical climates. But the southwest corner of the auld country around Dumfries and Stranraer is actually blessed rather handily by the balmy waters of the Gulf Stream, which means the paradise of Logan Botanic Garden sees exotic plants from Australia, New Zealand, South America and Africa thrive. Nab a cheeky selfie with a palm tree or the tender perennials in the antique glasshouse and pretend you’re chillaxing on distant shores. 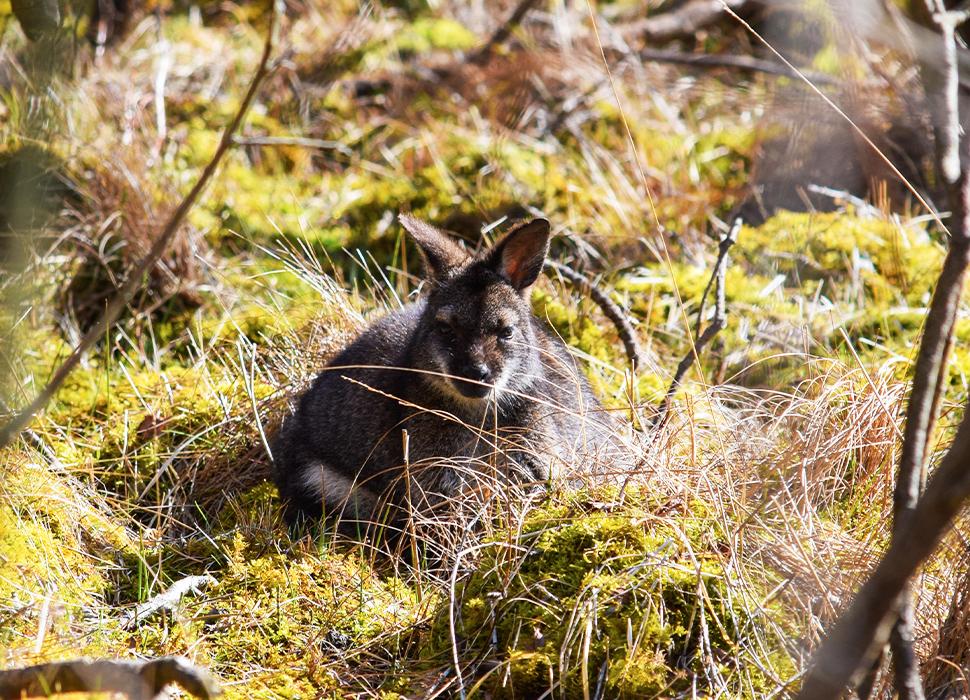 A wily wild wallaby on the Isle of Man / Image: Alamy

Of all the mythic monsters and bizarre beasties associated with the ancient folklore-loving Isle of Man, one unlikely critter really leaps out at modern visitors. Over the past few decades a small but steadily increasing population of wild wallabies has been colonising the island. It’s believed the present-day group – numbering somewhere around 100 wallabies – is descended from a gang of plucky wildlife park escapees who broke out during assorted daring jailbreaks in the 1970s and 80s. The harmless herbivores are no threat to anybody, and if you want to say "hi" they’re just a short hop across the Irish Sea.

Vines being tended to at Essex's Tuffon Hall

England might seem an unlikely hub for viniculture – but this rainy, chilly island’s reputation for winemaking is on the up. The chalky downlands of Kent, Hampshire and Sussex are the closest thing we’ve got to a British Burgundy, with vineyards like Chapel Down, Nyetimber, Hambledon and Tillingham bottling a host of delectable vintages: from flinty whites and crisp sparkling wines, to glou glou rosé and some truly outré natural varieties. An even more unexpected region making a dent in the local industry? Essex: the sunny climate and lengthy coastline of which is proving a hit for producers like West Street Vineyard in Coggeshall and Tuffon Hall at Castle Hedingham.

Fly to Luton or Stansted – book flights and holidays 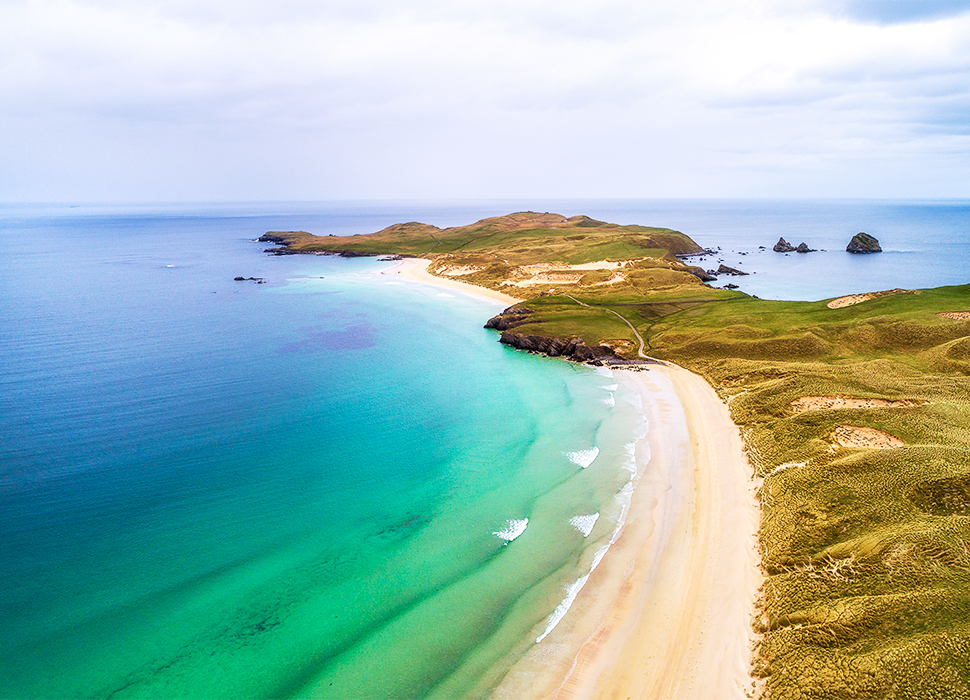 Harking back to the subject of Scotland being amazing, trek up to the far north and be rewarded by a lush, crescent-shaped white sand beach that wouldn’t look at all out of place on some UV-kissed Balearic shoreline. Balnakeil Beach is all about atmosphere – behold its spectacular orange sunsets, ruined churchyard and antique cemetery, not to mention handy proximity to the eerie-sounding Cape Wrath. A littoral gem. 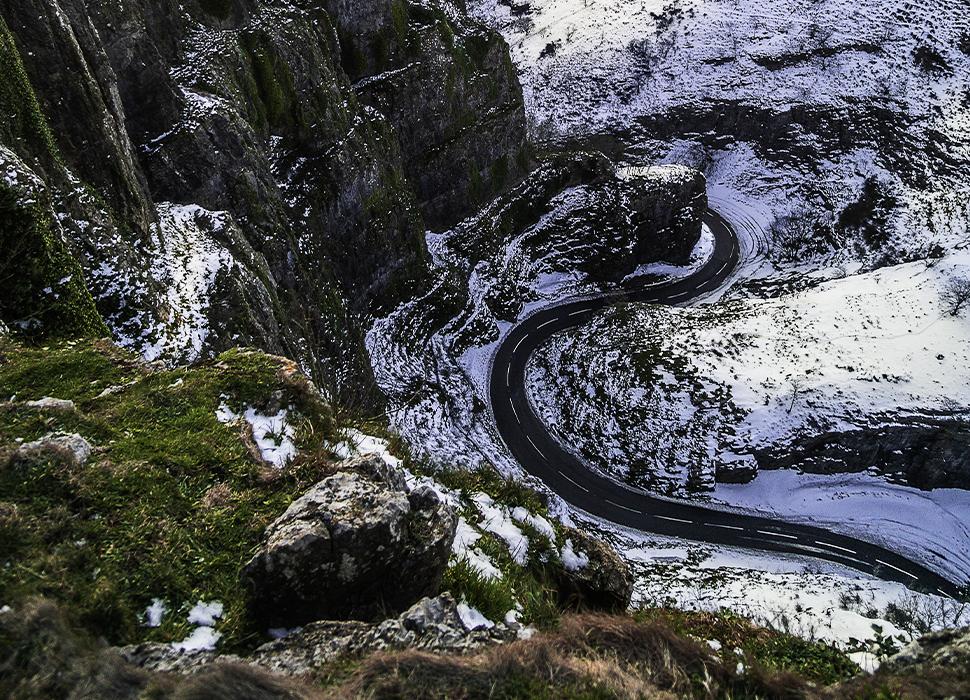 No, this excitingly bendy road isn’t in the Alps – so you’re very unlikely to be overtaken on it by James Bond blasting bad guys through the windscreen of his vintage Aston Martin. In fact what you’re looking at is the plain old B3135, snaking along the edge of Somerset’s Mendip Hills before scything through the picturesque, limestone Cheddar Gorge. Not long ago a popular satnav app rated it the UK’s most interesting drive, for its knockout cliffside scenery and ‘engaging’ curves (ooh-er). All we know is this thrilling thoroughfare is gorge by name, and gorge by nature.

Warm up in one of Britain's cosiest spots. 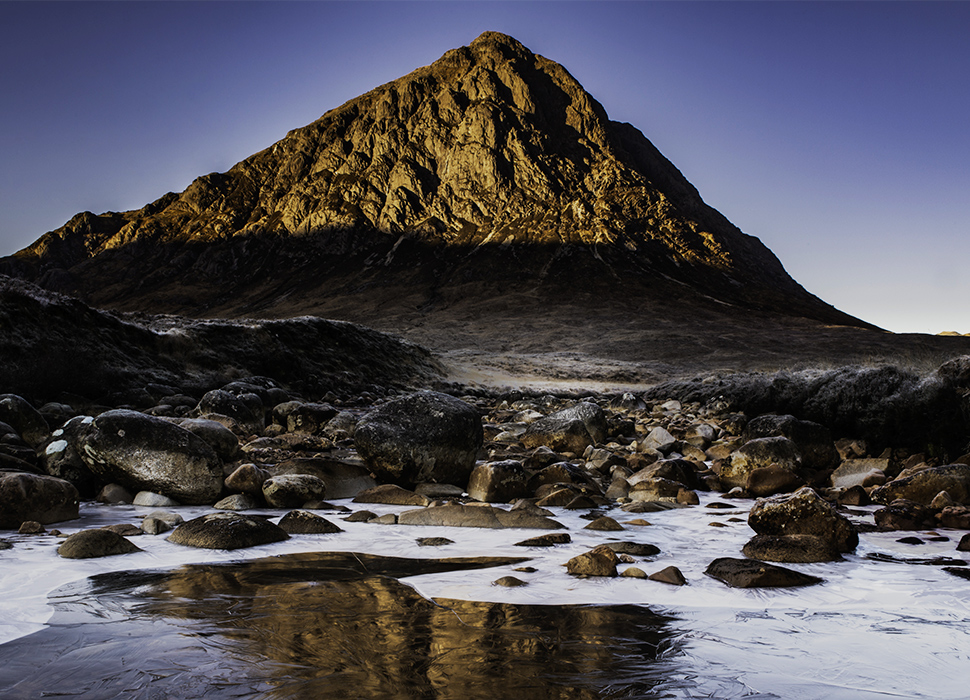 This magnificent triangular mountain looks as quintessentially unconquerable as anything you’d see up in the Alps. Buachaille Etive Mòr – pronounced “boo-ach keel-yi echiv ore” since you ask – is outrageously photogenic, located at the head of Glen Etive. And if you don’t fancy the straight-up scramble (who could blame you), it’s also accessible via a 6.8-mile hiking trail that starts near the wee village of Ballachulish. Neither is for the faint of heart, by the way – everything about this mighty rock communicates peril, and it has a point. 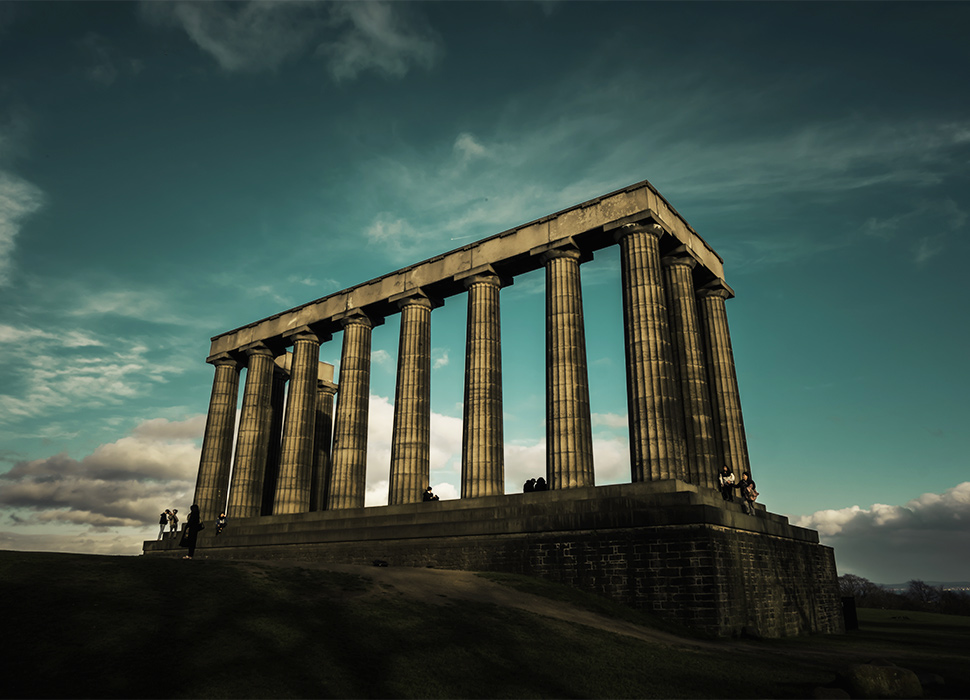 Scotland's answer to the Parthenon isn't finished, but it is a stunner / Image: Adobe Stock

In lieu of a grand tour around the storied monuments of ancient Greece, a trip to Edinburgh’s National Monument of Scotland should suffice until things get back to normal. Commissioned in 1822, when a group of well-to-do Scottish worthies set out to erect an exact replica of Athens’ Parthenon temple but ran dry of funds with only a dozen columns in place, it includes some of the largest individual stone blocks ever quarried in Scotland. Sneering newspaper commentators have since pilloried it as “Edinburgh’s folly” and “a national disgrace”, but it looks perfectly glorious at sunset irrespective of those rough column inches.

Find the best adventures in Scotland.

9. A picture-postcard Italian town (in Wales) 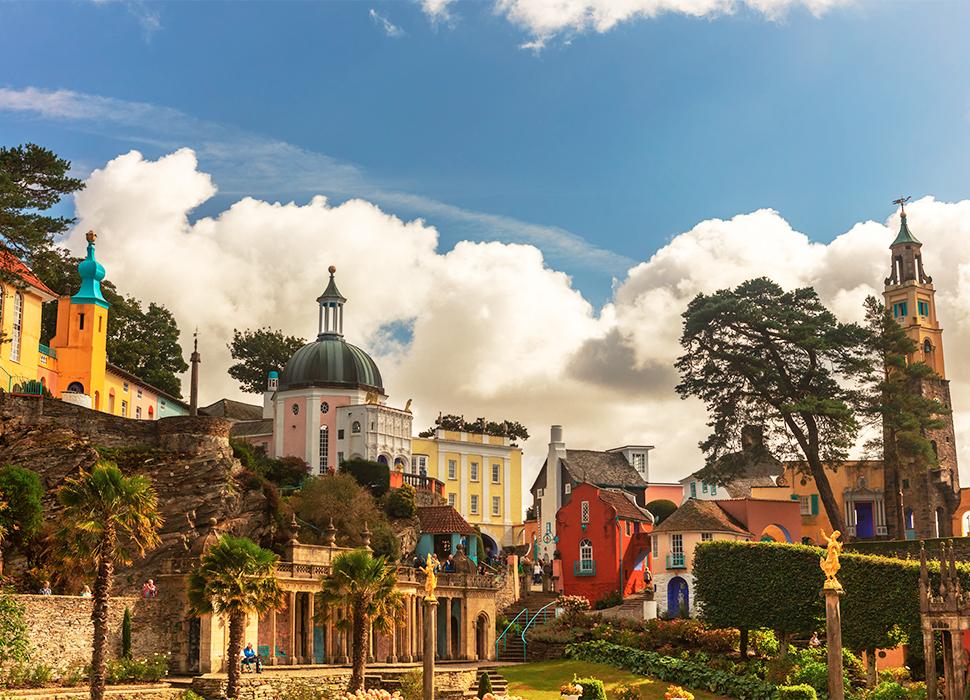 The village of Portmeirion is an Italianate marvel / Image: 123RF

Almost a century ago, wealthy eccentric Sir Clough Williams-Ellis purchased a ‘neglected wilderness’ on the coast of north Wales and turned it into, of all things, a facsimile Italianate village. Today, Portmeirion’s cheerful multicoloured shops and houses make for an agreeable mish-mash of baroque, Renaissance and Arts & Crafts styles, all jumbled together with a sense of fun, tongue very firmly in cheek. Trivia fans will delight in the fact the Beatles were huge fans of the village, and that 60s TV show The Prisoner was filmed here – either way it’s an arresting spot to help perk up your post-lockdown Insta feed. 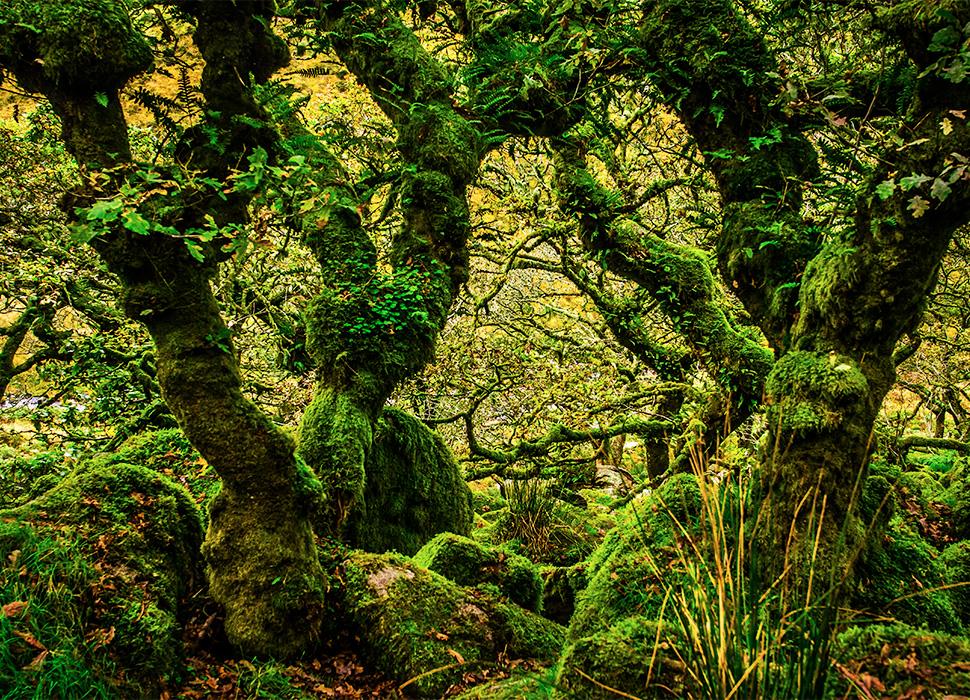 Who’d have thought there'd be a rainforest right in the heart of sunny Devon? Well, Wistman’s Wood is perhaps more properly described as a ‘wet Atlantic woodland’. But nonetheless the Dartmoor forest’s gnarly dwarf oak trees – many of which are at least 500 years old – are caked in rare mosses and some 120 types of lichen. That’s before we’ve even got to the prodigious adder population, and local tall tales of the ‘Wild Hunt’, a mythical ghostly horde out to snare unwary souls and drag them back to the pixie underworld. Best stick to the footpaths then.