The signature fondue at eCHo, in the Zurich Marriott Hotel

The 7 finest fondues in Zurich

Hot cheese, cold bread and a warming waft of kirsch in the air – it could only be the calorific classic melting-pot of a Swiss fondue. These are the best in town

The signature fondue at eCHo, in the Zurich Marriott Hotel

Probably France’s most important contribution to the Swiss culinary melting pot, fondue (from the French verb 'fondre', meaning 'to melt’) is a must when you’re in Zurich. Typically a winter dish – eat it when there’s snow on the ground is the local rule of thumb – it’s nevertheless ace all year round. Apparently you’re not advised to drink water with it, as it reacts badly with the cheese in your tum. White wine, for the record, is just fine. Here’s a few of our fave fondues in Switzerland’s largest city.

Fancy winning a prize cow? Then step inside the rugged world of Swiss Alpine wrestling.

But hey, if it's food, not grappling, you're after – these are the best restaurants in Geneva. 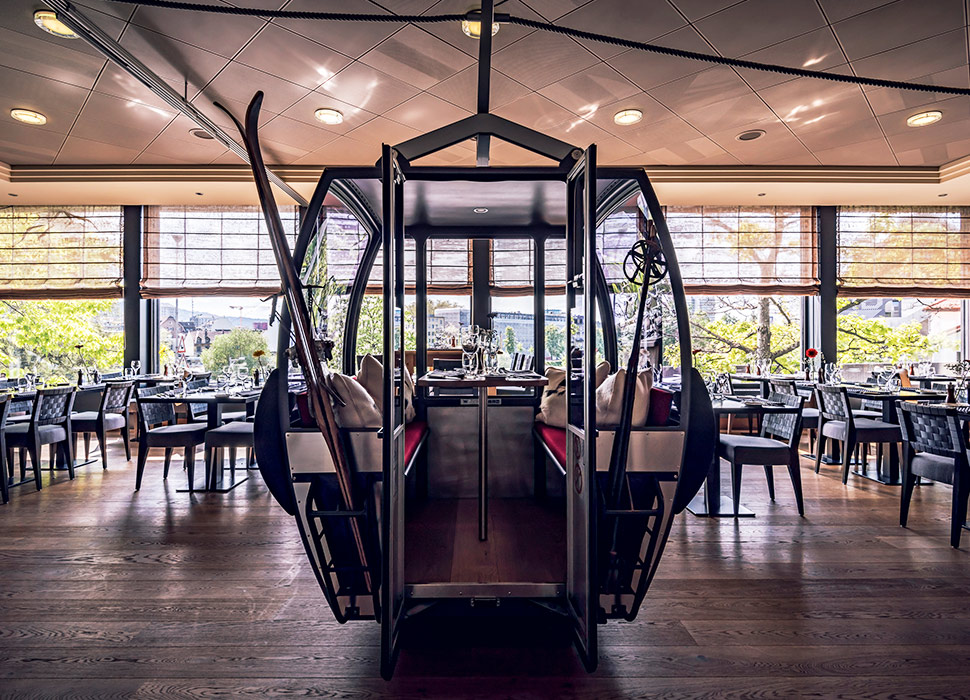 First, don’t be put off by the fact it’s in a branch of the Marriott hotel chain. Here, the fondue is lovingly prepared with milk sourced from a dedicated herd of alpine cattle, and the ‘wine buffet’ is a lovely gimmick after a long day slogging around the city. The main draw here, however, is the opportunity to dine in an actual cable-car gondola. In the middle of a restaurant, sure, but with sweeping photos of alpine peaks you could just about be fooled. Is it kind of cheesy? Well, that’s surely the point.

Situated in an alleyway at the foot of the glorious Grossmünster – that massive church, you can’t miss it – this traditional spot has been serving gooey cheesy goodness to locals and international travellers for over a century. Why is it so good? Classic, mature sur choix cheese from the French-speaking Vaud region. Try their take with ‘morels’ – mushrooms – or the lavishly indulgent Burgundian beef fondue. With a giant glass of white wine, the way god intended. 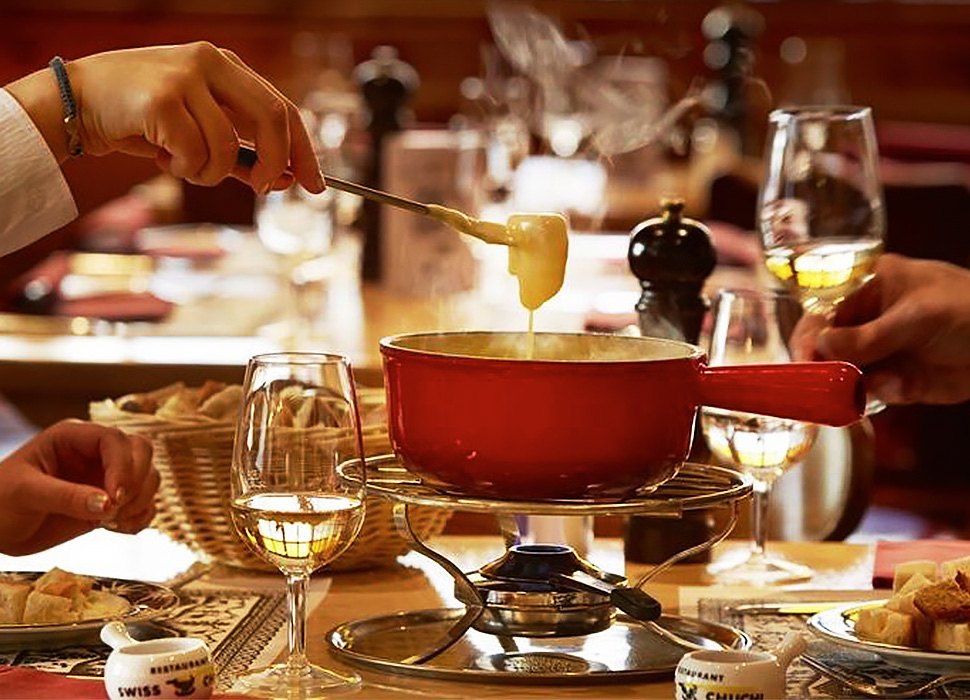 If you’re looking for quaint, cutesy Swiss ambience this is trad spot in the downtown hotel Adler is a solid bet. It’s famous for its rösti spuds and hearty Alpine macaroni, and you’ll want to book as it fills up fast. If you do nab a table, definitely go all out and order the mouthwatering ‘fondue mit schwarzem Trüffel’. That’s Gruyère and Vacherin cheese, with black truffle, white wine, garlic and cherry brandy. That’ll warm your cockles.

There’s a good chance you’ll hear this place before you see it. A lively, jolly Alpine beerhall aiming at the pretzels, beer and oom-pah demographic, its the place to be if you sneakily enjoy conga lines. Be aware, beer costs a little extra when there’s a band on. Still, the fondue is great, with piquant takes on the classic like a ‘Diavolo’ with spicy salami, gorgonzola cheese and chili. 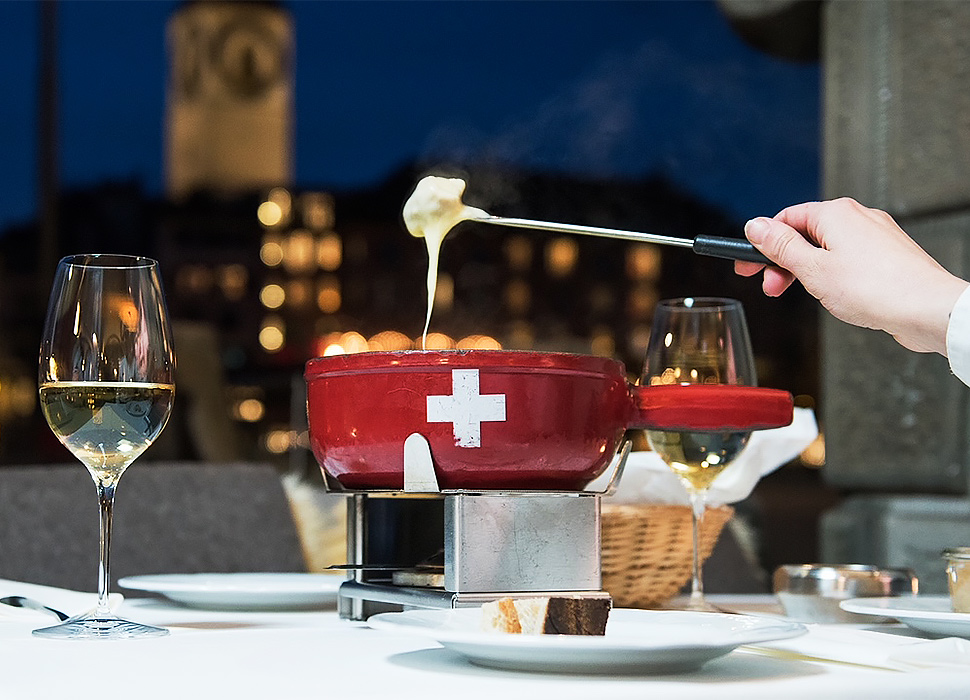 The fondue's great but the flag's a big plus, too

Zunfthaus zur Zimmerleuten's setting alone makes it worth stopping by. The ancient ‘carpenter’s guild house’ is an eye-catching riverside structure, all sharp pinnacles and a ravishing double-height oriole window. The dining room is a spectacle in itself, with coffered wooden ceiling and marble Corinthian columns. For best results, eat your fondue outside under a blanket. There are heaters, plus the Zurich skyline – it’s all very romantic.

This worthy local chain, with three branches across the city, certainly goes all-in on tweeness, with gingham tablecloths and net curtains. Never mind all that, how’s the fondue? Hearty and rich is how. A classic red pot is delivered with a generous basket of bread, potatoes and pickles, if that’s your vibe; while the kirsch (brandy) offsets the clagginess very nicely, and harmonises beautifully with the house dry white wine. Quite stubendous. 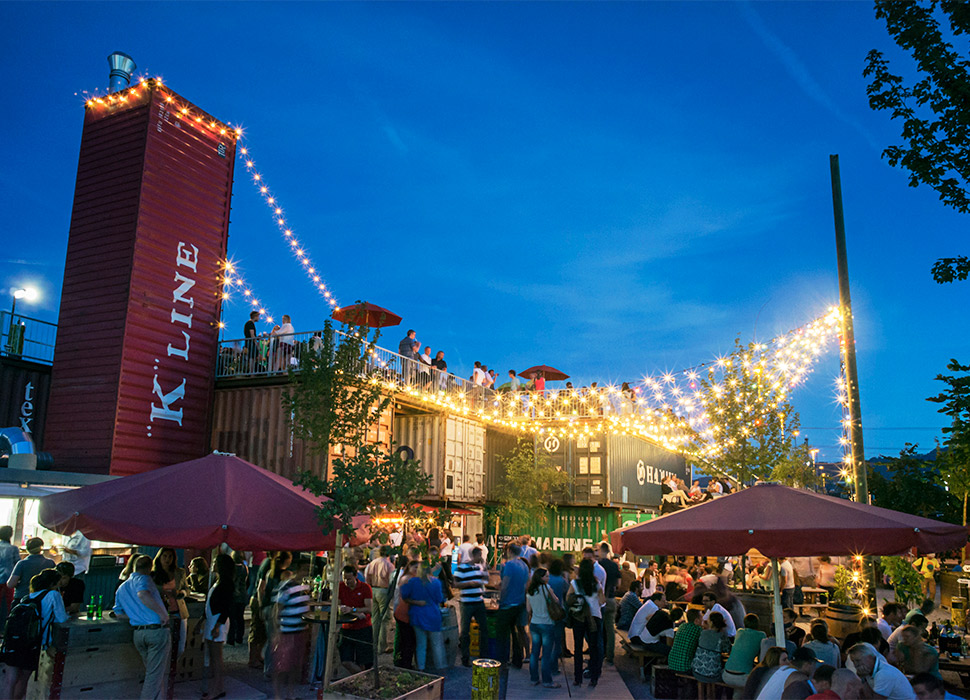 If you’ve had quite enough tweeness for one day, stop by this uber-contemporary – for Zurich, anyway – hangout at the foot of the futuristic, mildly dystopian Prime Tower. Essentially an ex-industrial plot of land by a railway yard, its shipping containers have been repurposed into a groovy open-air drinking and eating den. All the usual craft beer and burger suspects are available, plus a respectable fondue, shorn of stuffiness, and served inside at Frau Gerolds dinky wooden cabin during colder months.