St Moritz is a classic for a reason // Image: Switzerland Tourism / Silvano Zeiter

The 10 best ski resorts in Switzerland

Given its wealth of spectacular mountain scenery, the super-pretty Alpine nation is basically synonymous with skiing. To help you find your perfect piste, we've whittled down the best resorts in Switzerland

St Moritz is a classic for a reason // Image: Switzerland Tourism / Silvano Zeiter

There aren’t many countries more impressively mountain-covered than Switzerland. Home to over 10,000 peaks, 1,800 glaciers and months and months of fresh snowfall, it’s fortunate the Swiss like to make the most of their natural assets.

Over the past century and a half or so they’ve created some of the world’s best ski resorts, full of pedigree, prestige and fresh powder – and it's simply up to you to decide which to visit next. To help you pick, here's our take on the 10 best ski resorts in this ace Alpine enclave.

City break more your jam? Why not set your sights on Geneva? Here are the ten best things to do there.

Just a load of hot air? This is what it's really like to toot on an Alpine horn. 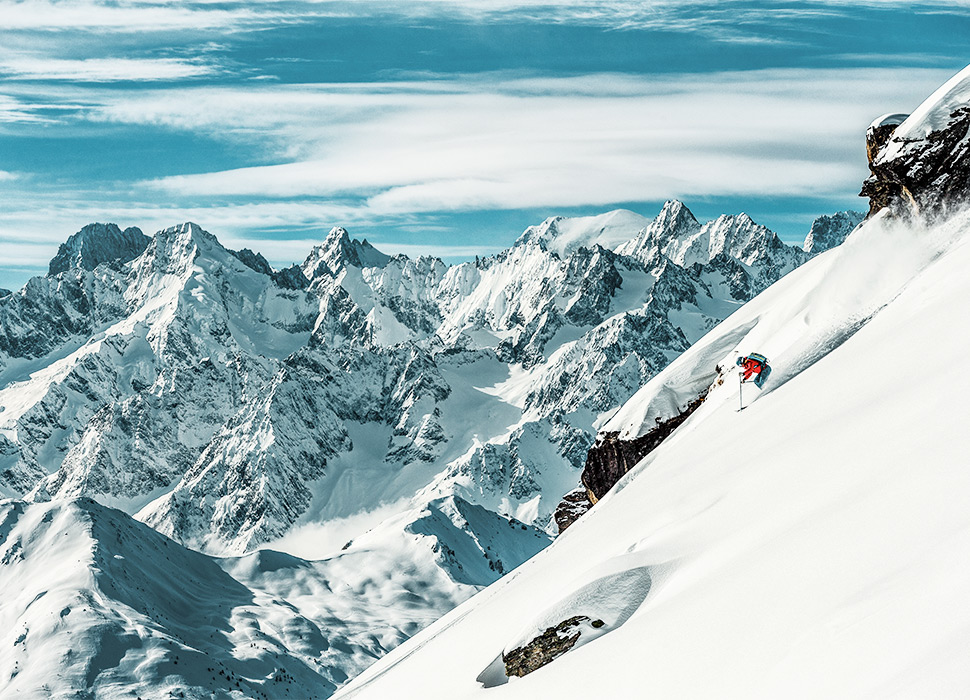 Hailed for its extreme terrain, Verbier has a legendary reputation among die-hard skiers. Itinerary and off-piste runs from the likes of Mont Fort, Mont Gelé and the Col de Gentianes are the names to know, but don’t fret if you’d rather stick pins in your eyes than tackle near-vertical couloirs and powder fields – what makes this place extra special is the resort’s satisfyingly diverse slopes, especially around La Tzoumaz and La Chaux, and its party-loving atmosphere. 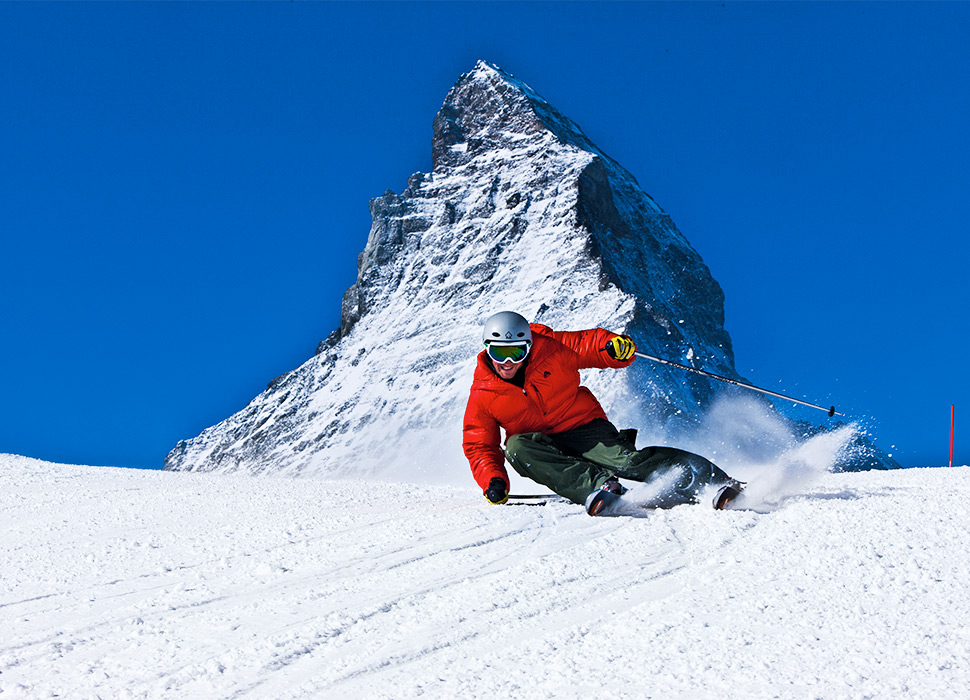 Made famous largely because the Matterhorn gives an Egyptian pyramid a run for its money, Zermatt has cemented its place in the upper echelons of world-class ski resorts. It nails that holy trinity of varied and adventurous slopes, oh-so-pretty places to stay and really, really good restaurants – on and off the slopes. For the best of the best in Zermatt, head to Klein Matterhorn, at 3,883m, and ski all the way back to the village, 2,000 metres below.

Fly to Geneva or Zurich 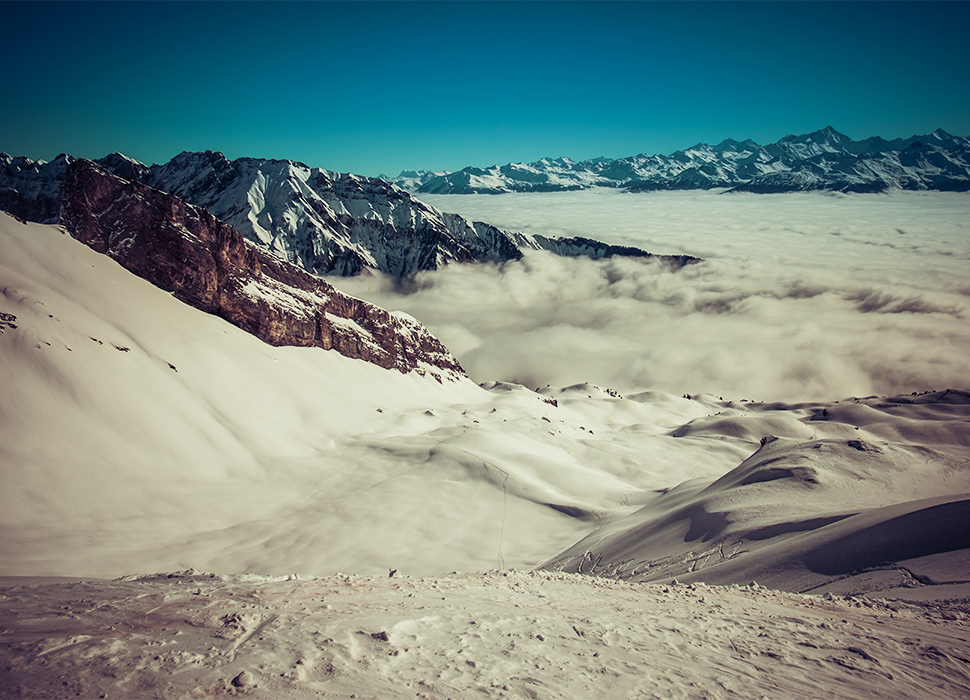 Crans Montana is one of those classic Swiss resorts, where it’s all about the refined, relaxing experience and drop dead gorgeous views of the surrounding mountains. Set on a sunny plateau in the Valais region, we like Crans Montana because it manages to be both modern and inventive (it recently opened the world’s largest network of ski touring routes and is the generous host of the City Ski Championships), as well as chic and traditional. The skiing is flattering and the hotels are like old friends – it’s the perfect mix. 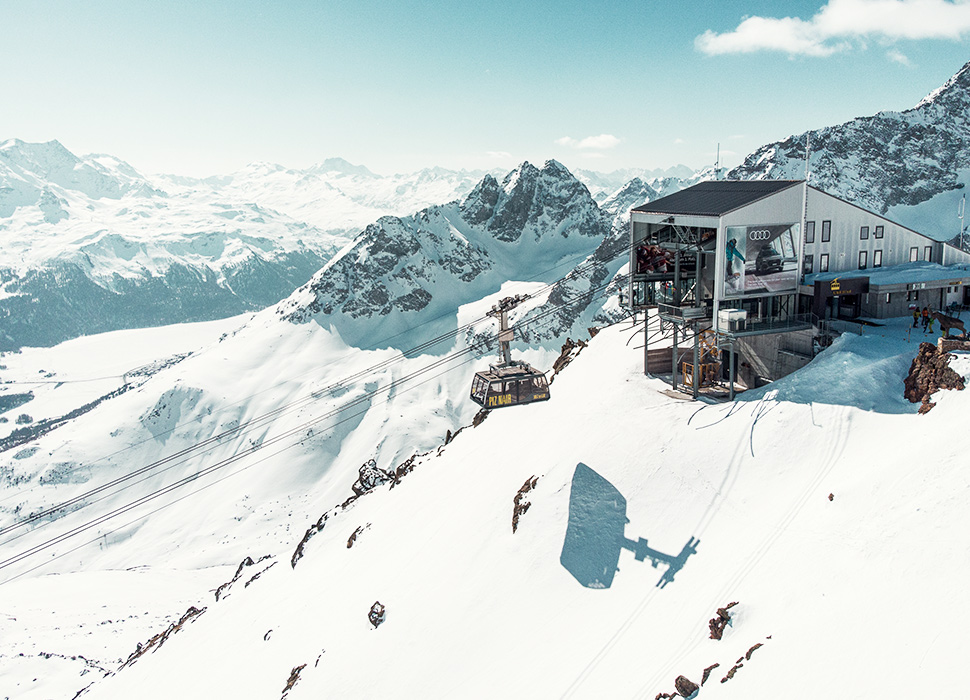 So much more than just a ski resort, St Moritz is surreal. Oozing with history (it lays claim to being the birthplace of Alpine winter tourism in 1864 and has twice hosted the Winter Olympics), glamour and an otherworldly atmosphere, the town sits at the edge of a lake, where in winter you can expect to see polo matches, horse racing and even vintage cars racing on its frozen surface. On top of all this expect a fabulous mix of architecture – everything from grandiose Belle Époque hotels to futuristic Norman Foster inventions – yet the skiing is by no means an afterthought. Three separate areas cover 350km of slopes; Corviglia is the home mountain full of perfectly groomed intermediate runs. 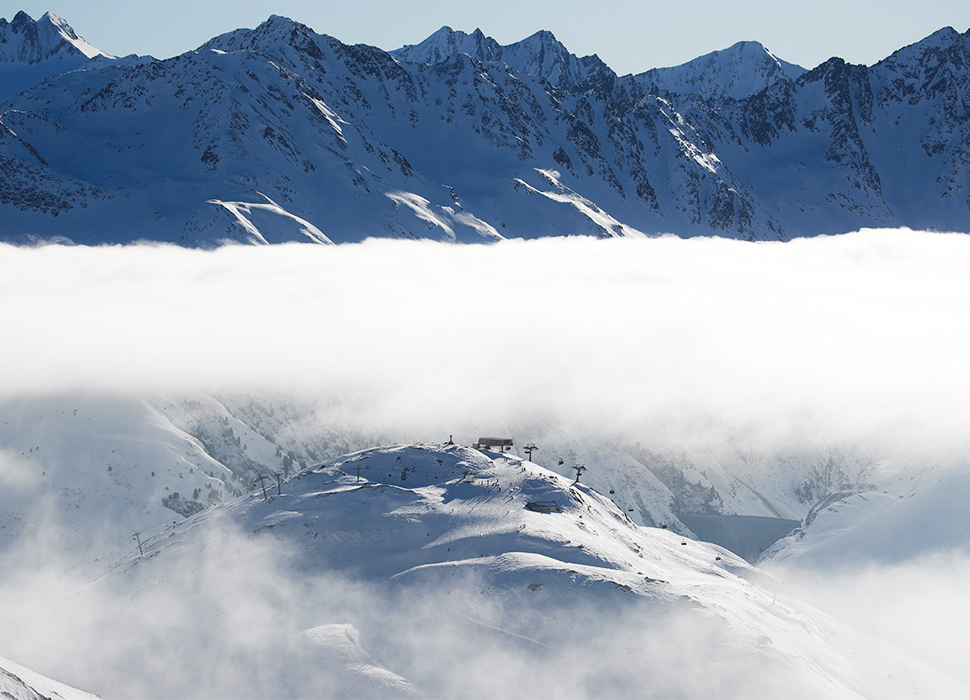 This once sleepy resort is now in contention as Switzerland's finest / Image: Adode Stock

Andermatt is many things to many people. Its main mountain, the Gemsstock, attracts snow storms from all directions and has long been loved by fearless freeriders. Then, in 2013, the Chedi Andermatt opened and the resort began to change from a sleepy backwater to a luxury contender on the international scene. Once this epic five-star hotel opened, there was no going back – the resort is now linked to neighbouring Sedrun, and Disentis further down the valley, and together they offer 180km of pistes to suit every ability. 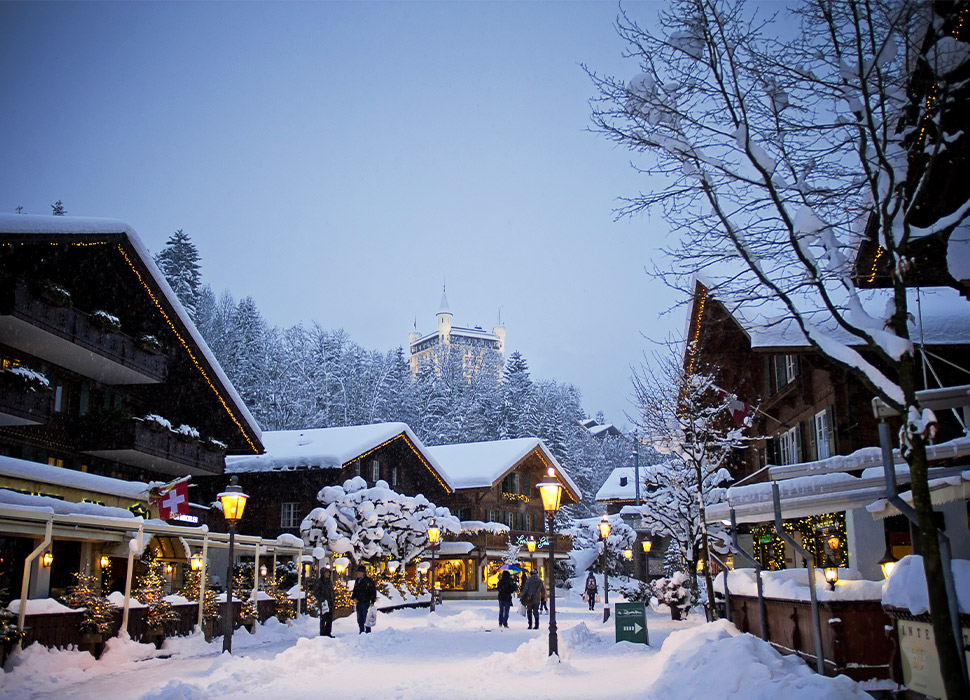 The original home of old-school Alpine glamour, Gstaad is everything you’d expect from a ski resort loved by everyone from Elizabeth Taylor and Richard Burton to Madonna. The village is full of posh shops (Louis Vuitton, Hermés and Prada), art galleries and gourmet restaurants, and properly luxurious hotels (the Palace, the Alpina Gstaad) welcome guests with discretion. For these guests the skiing is an afterthought; for the rest of us, the slopes are wonderfully quiet and dip and dive among rolling meadows across 220km of intermediate heaven. 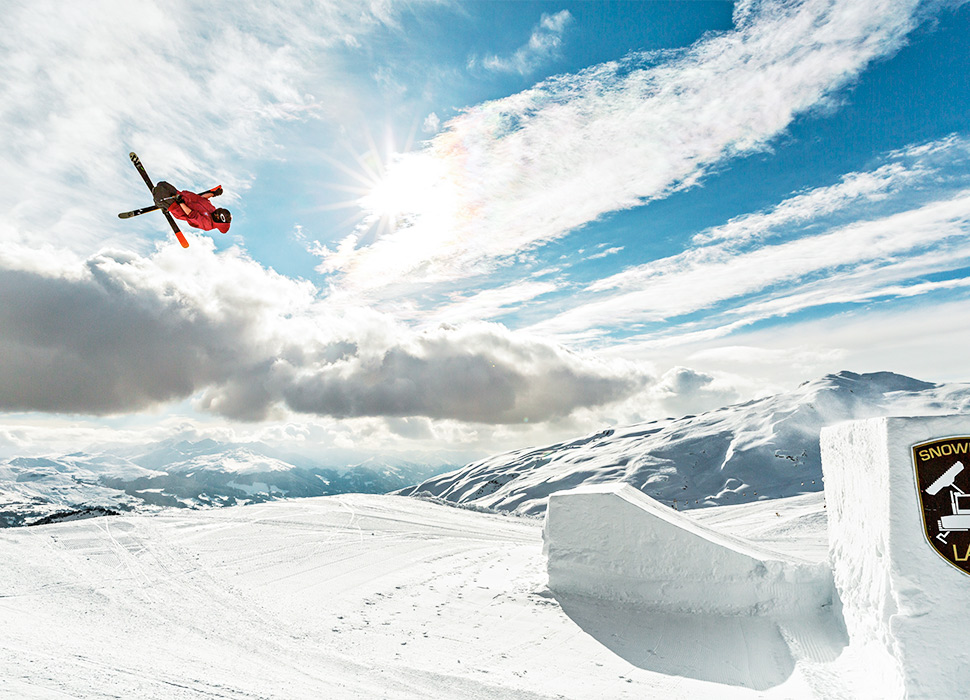 Nothing Flims-y about these excellent pistes and parks / Image: Switzerland Tourism / Jan Geerk

A Swiss resort where the skiing and snowboarding is put firmly first, Flims-Laax is a must for any budding Billy Morgans and Izzy Atkins. It’s a favourite with freestylers thanks to the huge and incredible terrain park at Crap Sogn Gion, while spread above the two villages are 188km of snow sure slopes to explore, as well as some fabulous ungroomed itinerary runs. Laax attracts a young crowd and is suitably vibrant; Flims is more traditional and relaxed – both have their merits. 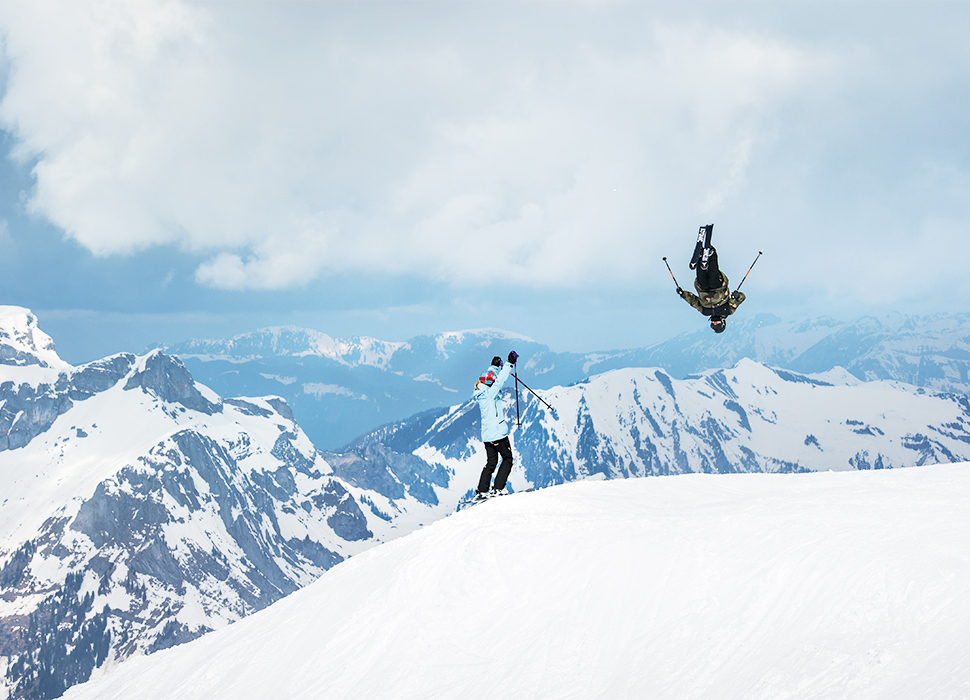 Engelberg has a winning combination of cruising blue and red runs, and serious freeride terrain, which all benefit from being in the same snow sure corner of Switzerland as Andermatt. With skiing to keep both families and experts happy, the contradictions continue in the town, where traditional mountain restaurants sit next to youthful Swedish-run bars and the resort’s history looms large. Originally put on the map by the 12th-century Benedictine monastery that’s impossible to miss in the centre, Engelberg really came of age in the 18th century when Mount Titlis, at 3,200m high, was climbed for the first time. It’s now having a well-earned renaissance. 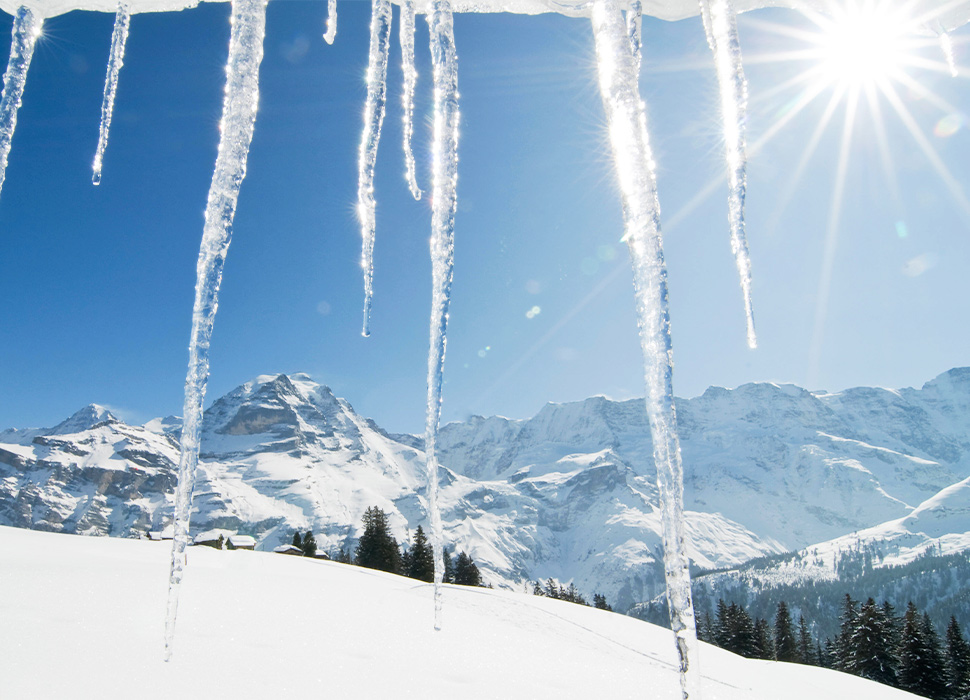 A fresh day in the ‘cradle’ of Alpine skiing / Image: Alamy

The resorts of Grindelwald, Murren and Wengen are good at sharing. Firstly, they have equal rights to the backdrop of three of Switzerland’s most iconic mountains: the Eiger, Mönch and Jungfrau. Secondly, across a network of cable cars and cog railways, they share 206km of slopes – including such gems as the Lauberhorn World Cup downhill course and Lauterbrunnen, home to the world’s longest race, the Inferno. And lastly, they share a revered place in the history of snow sports – they’re often referred to as the ‘cradle’ of Alpine skiing. 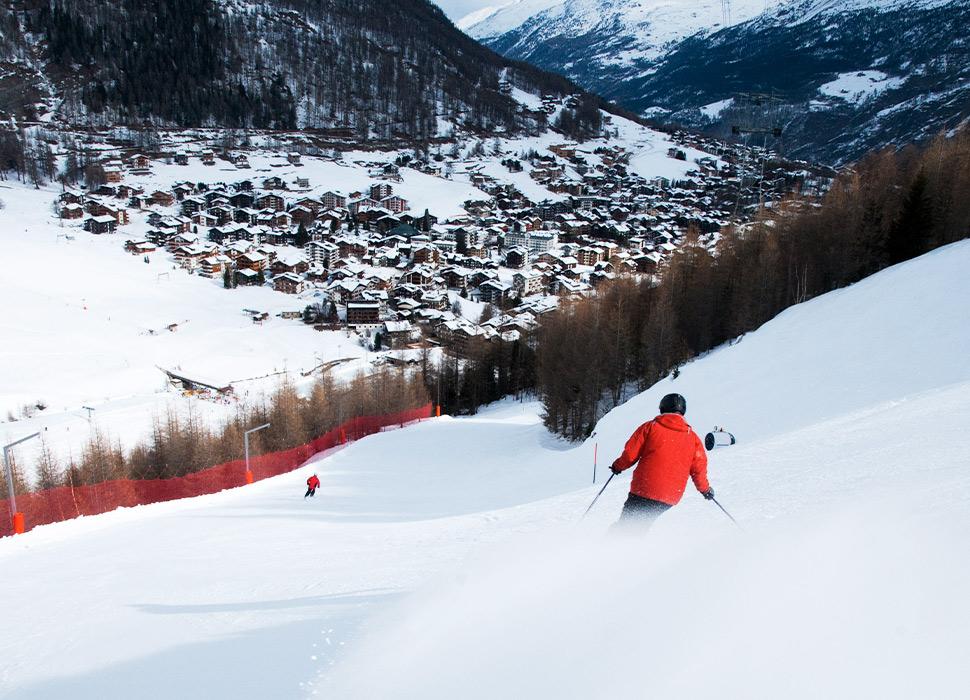 Considering Saas Fee is like a cheaper, calmer Zermatt and has glacier skiing and a cutesy traffic-free village, you’d expect it to be more well known. Be grateful it's not – it means the charming blue and red runs around the village, as well as the more challenging runs in Saas-Grund and Saas-Almagell further down the valley, stay largely quiet, leaving you free to soak up the views of the dazzling glacial peaks and explore this Alpine paradise.

The 10 best ski resorts in Italy