Deep in the Alps, the hardest mountain men in Switzerland wrestle each other for the chance to win a prize dairy cow. We went to check out the oddly traditional world of schwingen

There’s a schwingers’ party going on and everyone is invited. The Swiss are mightily proud of their schwinging skills, particularly in the snow-capped Bernese Alps, where you’ll find schwingen clubs, schwingen competitions and schwinging men dressed in buttock-hugging schwingen pants. 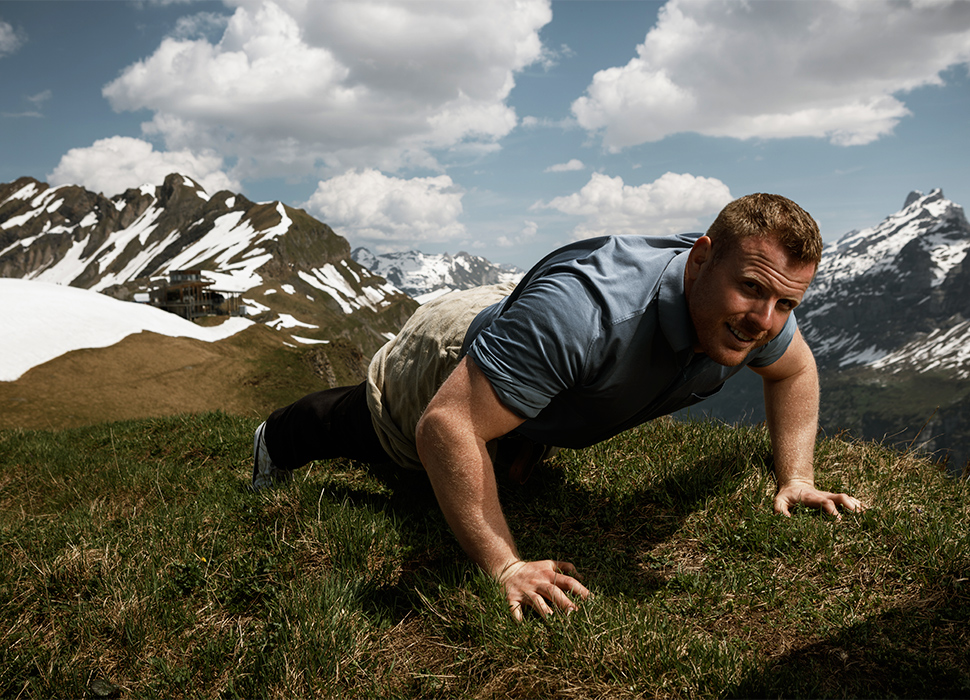 This afternoon, I’m training to become a schwinger – that is to say I’m training to become a traditional Alpine wrestler – on a mountain ridge high above the beautiful town of Meiringen. I’m with Matthias Glarner, the country’s 2016 champion – the tournament takes place every three years – in the popular sport of schwingen, or schwingerkönig (literally king of the schwingers).

“It’s always a great feeling to put another man on his back,” says the 33-year-old, as he shows me how to grapple an opponent to the ground in two seconds flat. “It’s about fast reactions and a smash-and-grab approach. It’s extraordinarily traditional, which adds to the appeal – everyone in Switzerland knows schwingen.”

Glarner’s quite blithe about all this, but everyone in the country knows the schwingerkönig too. He made headlines when winning the 2016 national competition, and then returning to defend his title in 2019 (albeit unsuccessfully) even after a major injury scare – a particularly macho 11m fall from a cable car during a magazine photoshoot that resulted in a broken foot, fractured pelvis, torn knee ligaments and two broken fingers. 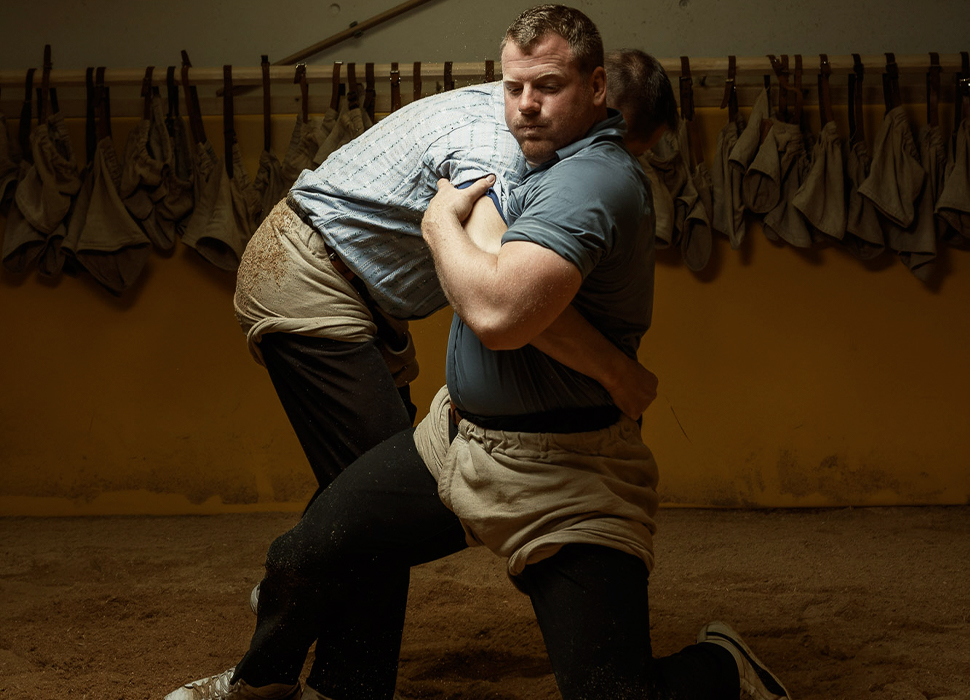 For those with the right technique and temperament, taking part in the three-day Schwingfest – the country’s triennial championships – is the equivalent of the Fifa World Cup or the 100m final at the Summer Olympics. Schwingen, an odd marriage of Greek wrestling and sumo in a sawdust ring, involves a lifetime of hard work, with most beginning to train aged nine or 10, continuing a family tradition that started with their father and grandfather. Women embrace the fight, too, but it’s still very much a masculine sport and one that’s bound up with Swiss tradition.

The sport – and the sense of national identity it provides – helps define the Bernese Oberland. This is not the Switzerland of banks and Rolexes, but the one of alpenhorns, yodelling, cheese feasts and Heidi skipping through a wildflower-filled meadow in a ruffly dirndl. There are waterfalls so high they seem to almost touch the clouds. There are mountains so spectacular they outperformed George Lazenby (in his only 007 outing, On Her Majesty’s Secret Service). 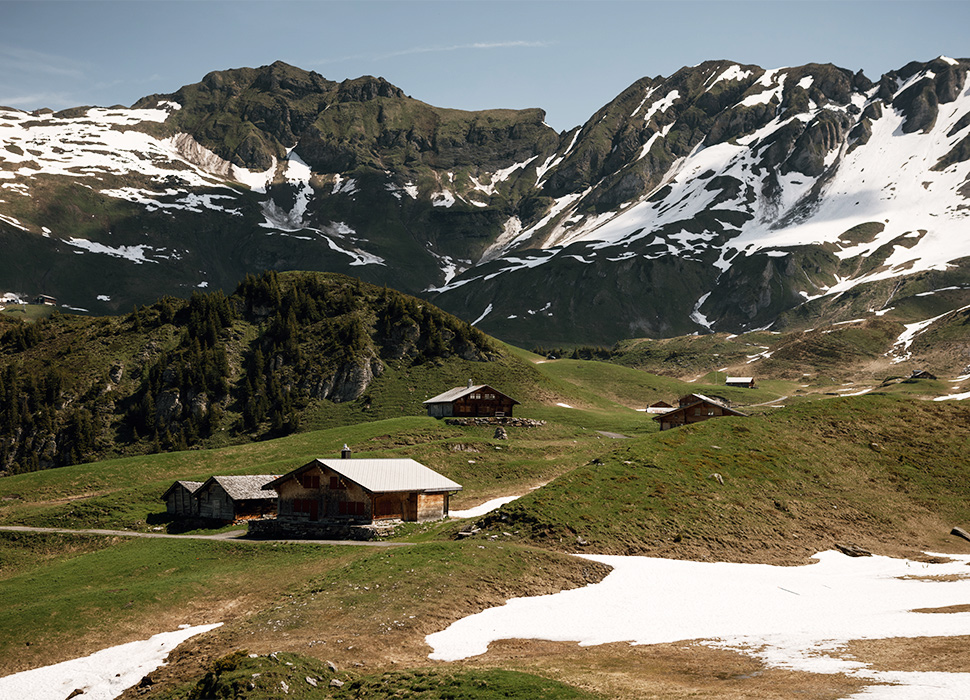 About those mountains: they’re the birthplace of the sport, and when Glarner’s not up for crack-of-dawn training – squatting 200kg and lifting 130kg in barbells, give or take – he’s working part-time at the Meiringen-Hasliberg mountain resort. This lesser-known hideaway, a Shangri-La for hikers in summer and skiers in winter, begins with stirring views of the Jungfrau and Mönch – two 4,000m-plus peaks of the kind that make visitors camera crazy – and ends with summits that march south to the Italian border.

His workplace also helps our photo shoot, as the Alpine wrestler is able to lift a 40kg cable-car wheel off the ground as though it’s nothing but a Froot Loop from a cereal bowl. “The one bad thing? I’ve had my face pushed into the sawdust more times than I can count,” says Glarner, pointing to an ankle injury and wonky finger he picked up from a competition the previous weekend. “You know, sometimes it’s hard to get up on a Monday morning, but nothing beats winning.” 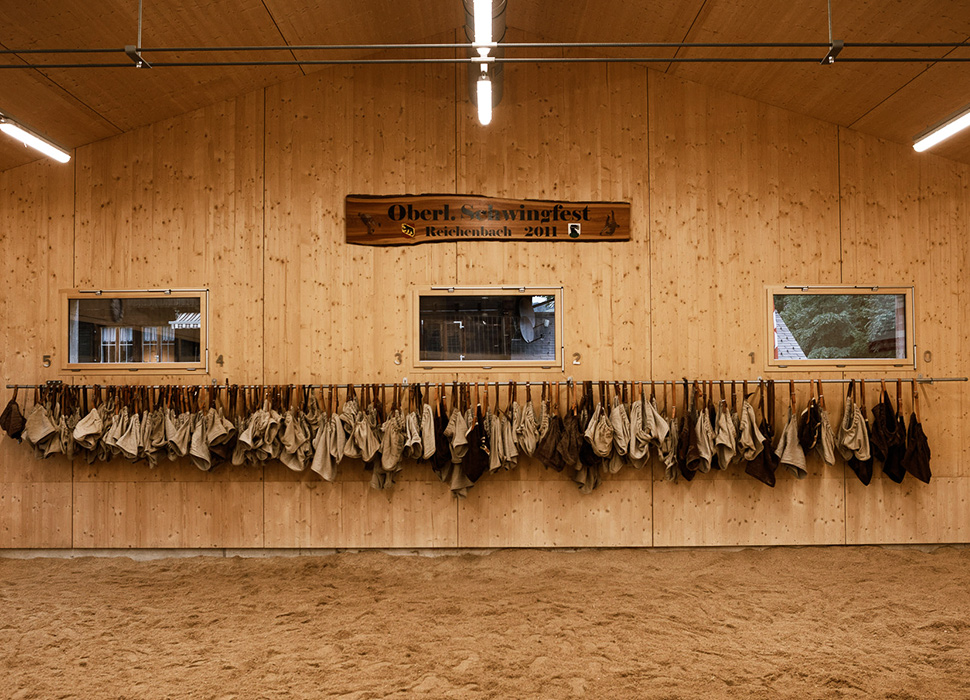 To put this in context, Glarner wins a lot. One-hundred-and-fourteen crowns, or individual match victories, to be precise. In 2016, that took him to the Credit Suisse Sports Awards, where he was up against tennis stars Roger Federer and Stan Wawrinka, as well as Olympic gold-medal-winning cyclist Fabian Cancellara – good company to share the top table with. The morning after his resounding schwingerkönig victory, 2,500 people came to party with him in his hometown. At 7am.

Despite the local fervour, the sport stands out as refreshingly simple. Competitors grapple in eight-minute rounds and the trick is to use power, strength and strategy to pin an opponent’s shoulders to the ground. Throughout, both wrestlers must hold each other by their jute schwingerhosen pants, at the back where the belt meets the waist. To not do so is to be disqualified. If there’s one thing schwingers love to talk about, it’s their crotches. 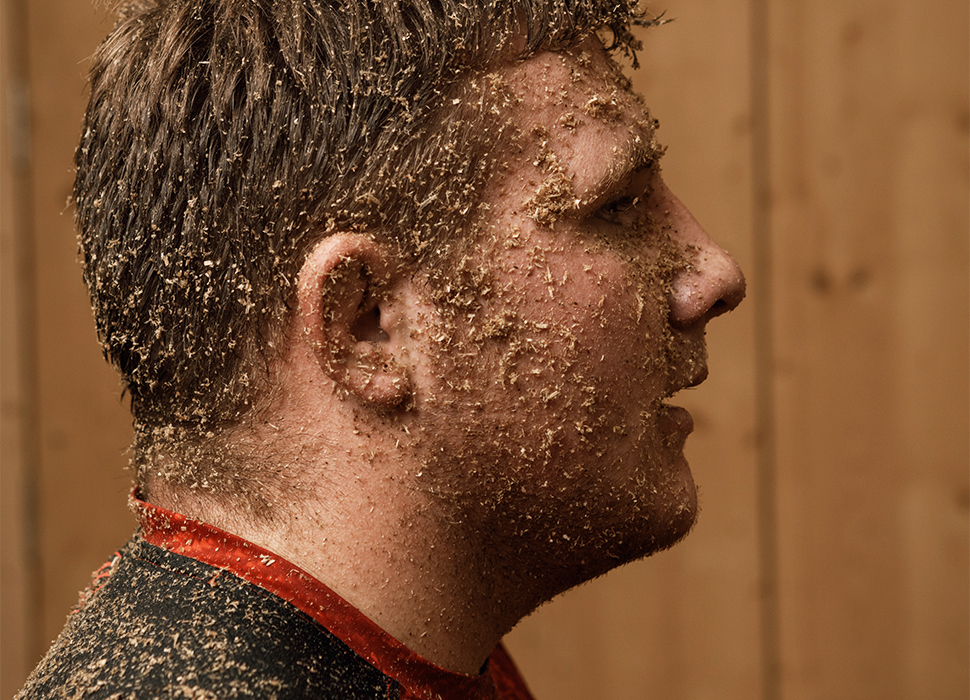 There are no professionals. Only farmers, cheesemakers, carpenters, labourers and ski-lift mechanics like Glarner, and they’re united in their drive for one goal: glory and honour. For those who take part, the circus of multimillion-pound football transfers and pro-wrestling entertainment, like WWE (where trash talk and bonkers fight cards are the norm) is a world away from Alpine wrestling’s 17th-century roots. Schwingen, you understand, is man versus man, pure and simple. If a wrestler wins, they choose between a CHF30,000 (€27,000) purse, a dairy cow or a prize-winning bull capable of fathering an elite herd of super-cows. When Glarner was crowned champion he chose the money, which makes sense, given the limited usefulness of pedigree cattle in cable car repair.

More than anything else, though, what makes schwingen inimitable are the down-to-earth characters behind the sport. They’re part of this living tradition. One such character is Jonas Lengacher, 30, who I meet the following day while he carves rib steaks at his family’s butchers Metzgerei P Lengacher, in the town of Aeschi bei Spiez. At his suggestion, we move between a colossal freezer and chopping-block table beneath a rack of meat hooks to conduct our interview. 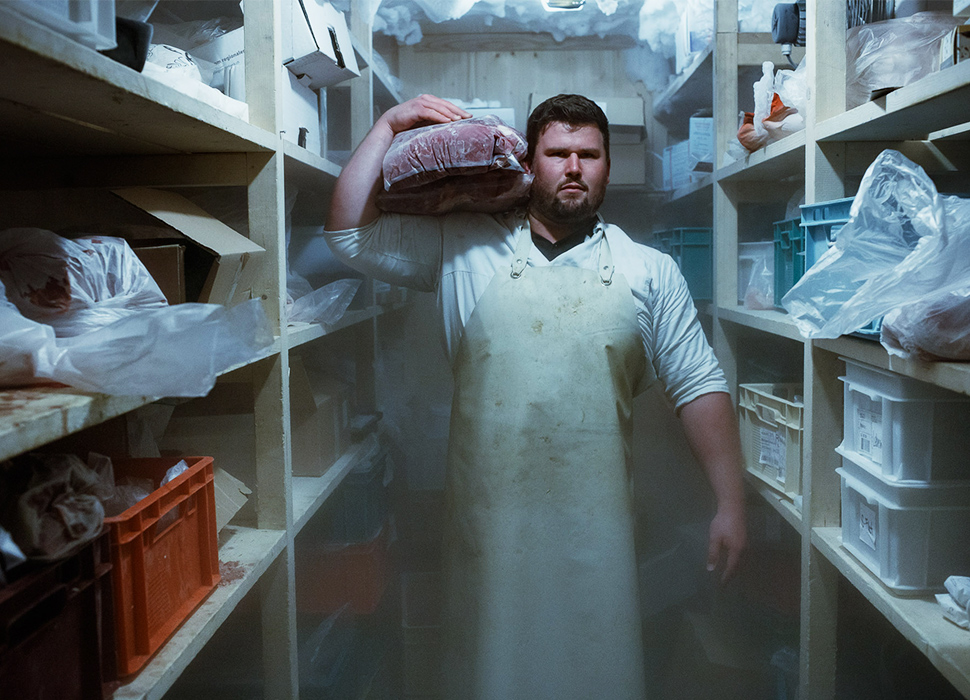 Get a butchers of Jonas Lengacher / Image: Charlie Clift

“The hard work of a butcher is great training for schwingen,” says Jonas, lifting a frozen 20kg slab of pork to show me its weight. He picks up another and gingerly places one on each bicep to underline his brute strength. “I’ve been competing for 20 years, but this is my last season, so I’m going to go out with a bang.”

Lengacher’s heyday may have been a few years ago, but he still has a secret weapon (“power, not technique,” he says) and his favourite move – the ‘kurz’ or cross throw – is a force to be reckoned with. It’s a quick Bruce Lee-style one-two flip of an opponent over his shoulders. He speaks of nerves before each bout, then shows me his trophy collection, given pride of place in his apartment’s kitchen above the butcher shop. In a glass case are ceremonial cowbells and dozens of wreath crowns, handmade from artificial oak leaves and acorns, and all symbolic of the traditional life schwingers aspire to. 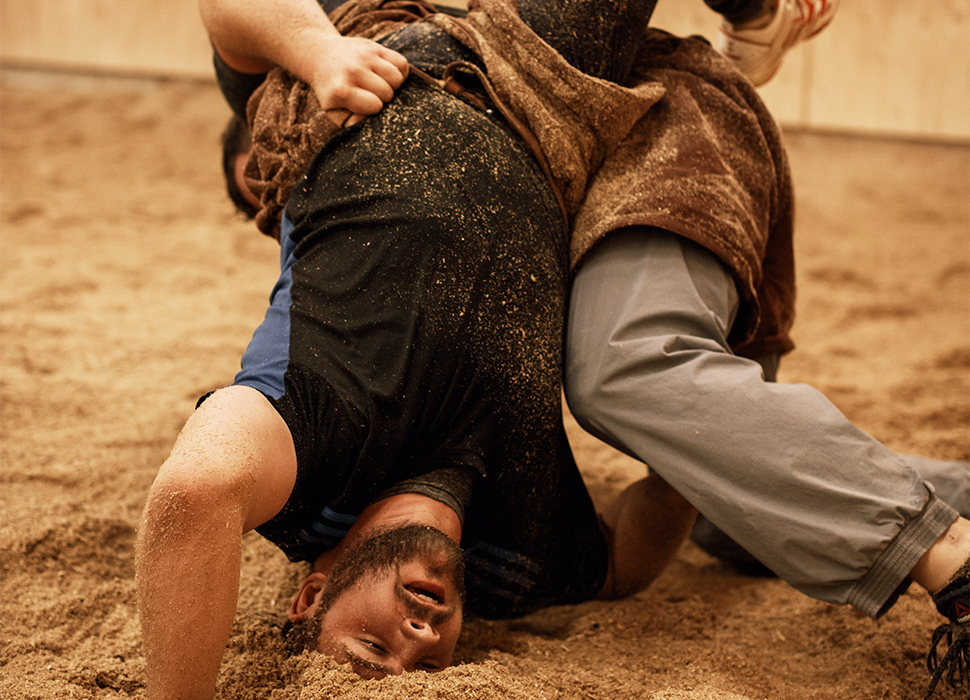 That afternoon, his 22-year-old training partner Thomas Inniger, a stout up-and-comer from Adelboden, arrives and together we drive 10km further south, deeper into the Bernese Oberland, to Reichenbach im Kandertal, the heart of schwingen country. Later, there will be fondue and wine, but first they must get down to business at the traditional wood-framed schwingkeller where they train.

Jonas – as huge as his name suggests and definitely capable of fighting his way out of a whale’s belly – grabs Thomas by his tight lederhosen pants and they’re off, the bout soon descending into a blur of writhing limbs and buttocks. There is body-searching and crotch-grabbing, and sawdust flies into every orifice. It’s akin to a bar fight meshed with a rugby scrum, but the rapid pace and intensity is exhilarating for the spectators. Small wonder this summers Schwingfest is expected to draw a record-breaking crowd of 250,000.

With the bigger man hitting the floor first, and the pair hugging as old friends straight after Inniger’s win, it seems a rather poignant summary of schwingen as a whole: the camaraderie and friendship, the tradition of the cowbells and the cattle, the sawdust in the air, the pastoral life and beautiful mountains outside the window. Somehow it all makes sense here, surrounded by a fraternity of brothers in arms who like nothing better than to grab each other by the breeches and hurl one another through the air.

For more information on schwingen, visit myswitzerland.com and esafzug.ch