Nothing fishy about the colourful dishes at Fiskebar / Image: © The Ritz-Carlton Hotel de la Paix, Geneva

The best restaurants in Geneva

Nothing fishy about the colourful dishes at Fiskebar / Image: © The Ritz-Carlton Hotel de la Paix, Geneva 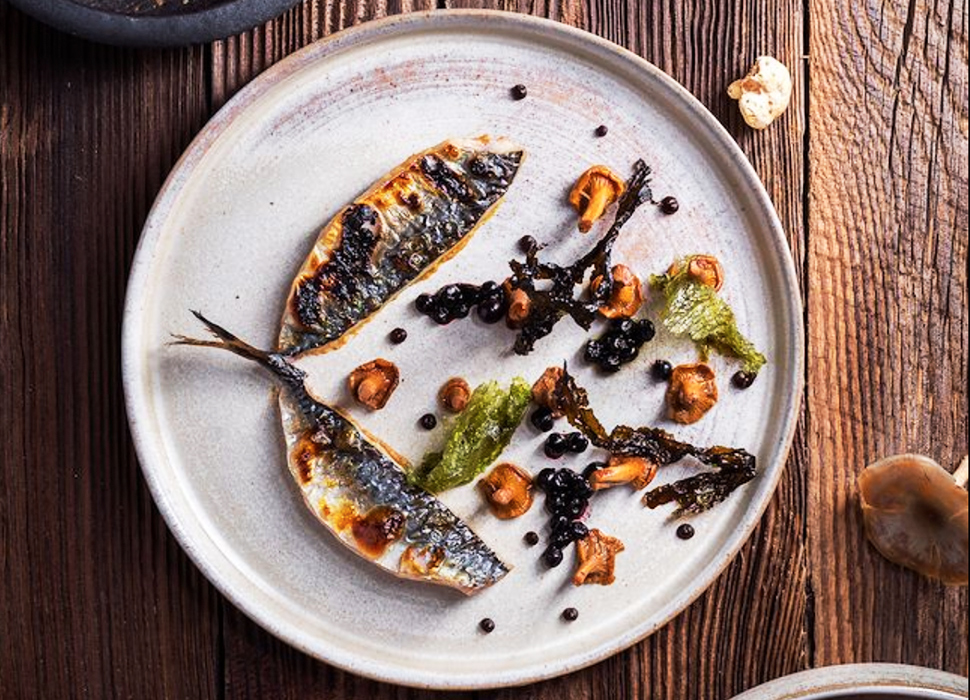 Fiskebar rocked the Genevan dining scene with its Nordic-inspired cuisine when it opened in the Ritz-Carlton Hôtel de la Paix in 2017. Soon after, the big-wigs at Michelin took note and blessed the restaurant with a Michelin star. Since new head chef Francesca Fucci took the reigns in September 2020, she's re-invigorated the restaurant's experimental IQ. The bold dishes that emerge from the open kitchen spotlight earthy, left-field ingredients, like the black-garlic mackerel with berries, soft lobster rolls, sweetbreads and liquorice. 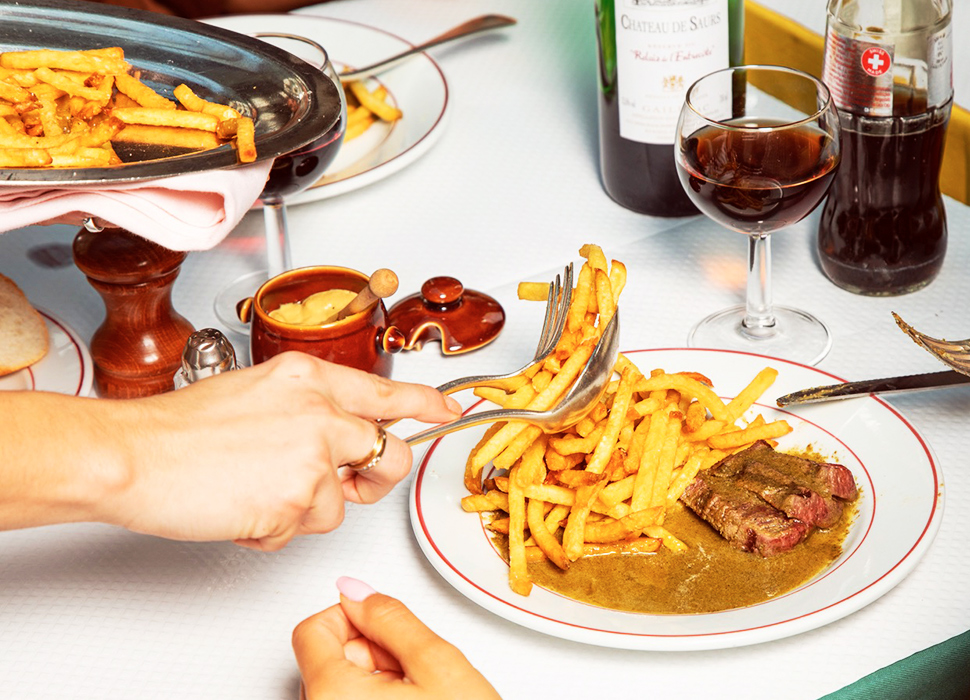 It's all meat and potatoes at this classic restaurant

Simplified dining is a strong point at this overwhelmingly popular spot on Geneva’s rive gauche (left bank). A no-reservation policy means you'll constantly find a queue snaking out the door, and the absence of a menu ensures everyone packed inside the formal, white-tableclothed dining room limits your choice to one formula. That being: green salad peppered with walnuts, followed by two table servings of ultra-skinny fries and sliced entrecôte steak smothered in a sublime butter-herb sauce – the recipe for which is top secret. 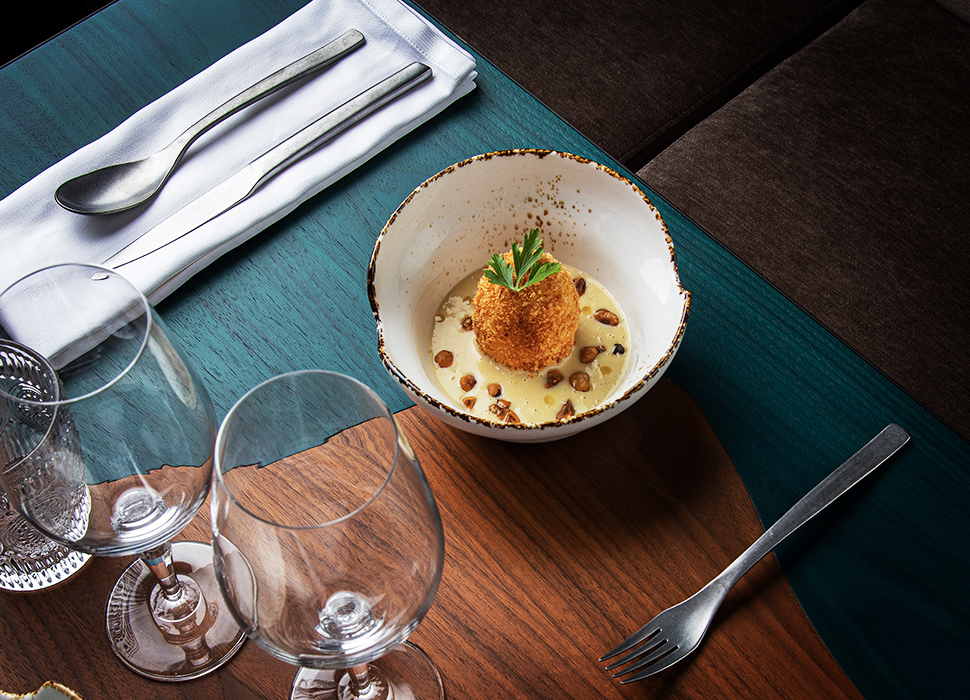 Philippe Chevrier is Geneva's best-known chef, which means sampling his culinary feats usually comes at a premium. Monsieur Bouillon is the notable exception – this new-gen bistro doesn't break the bank nearly as much as Chevrier's other marquee ventures (like his hoity-toity gourmet river cruises and Michelin-starred outfits). Oddly or ingeniously, chicken and eggs inspire the menu here, which proffers breakfast eggs in multiple guises and spit-roasted, juicy Bresse chickens with lemon and rosemary. Dessert? Eggs à la neige – a fried egg and parmesan cream delight. 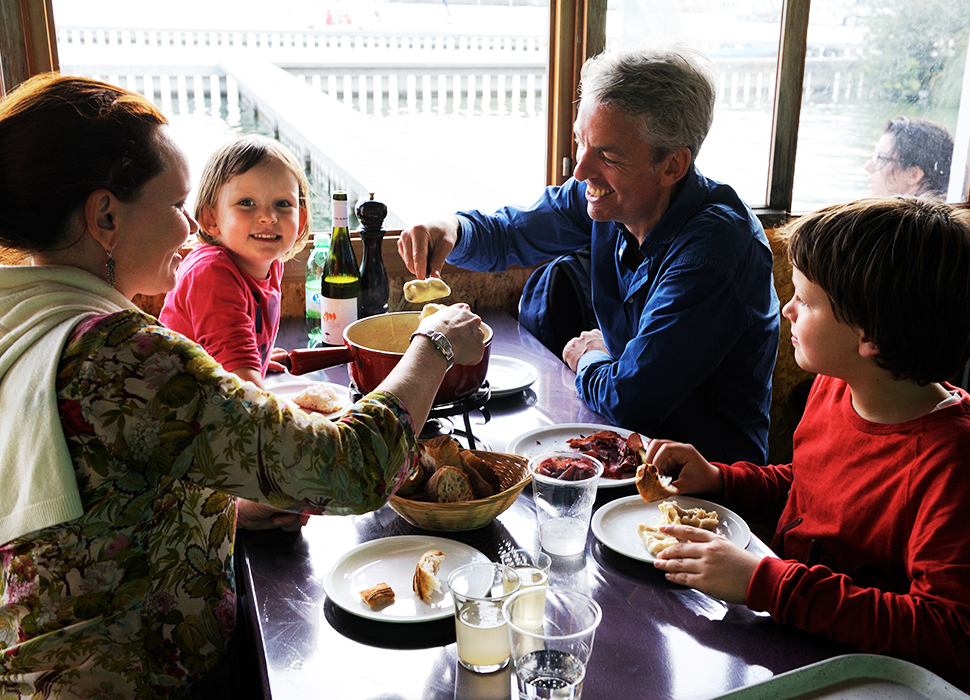 Scrub up and eat up at the city baths / Image: Fausto Pluchinotta

Dining at the city baths is as much about the deliciously retro location as the truly masterful Swiss cheese fondue available here, which froths and bubbles with local fizz. The restaurant is on a 1930s reinforced-concrete pier with 360° views over Lake Geneva, while the communal tables in the noisy buvette (canteen) feel like relics from old-school Geneva. The secret weapon in their addictive cheesy cauldrons is Crémant de Dardagny, a sparkling white Chardonnay from vineyards west of Geneva.

Chicken roasted in a salt crust, served at the table in two services with crisp potato rösti and velvety poultry velouté, has been the star dish at Auberge d’Hermance for three decades odd. But since the arrival of young French chef Colin Rey in 2018, the bourgeois country inn – with romantic summer flower garden and roaring fire beneath wood beams in winter – has blazed a bolder path. Think deconstructed wild mushroom ravioli, a sassy swordfish and salmon sashimi, bouillabaisse du lac léman (fish stew) swimming with local catches. 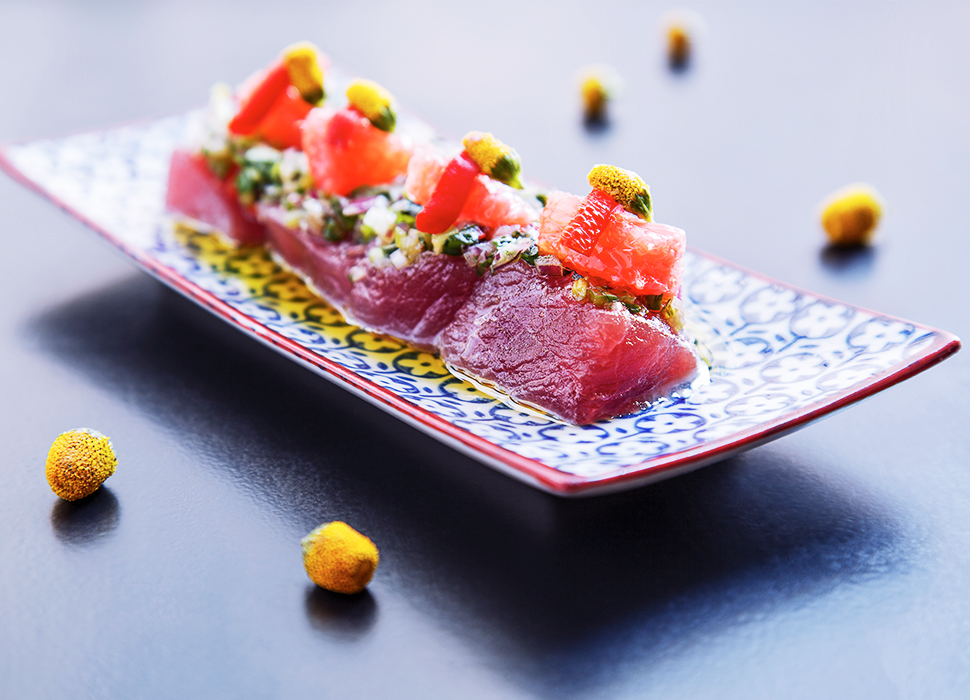 The delightfully bonkers Eat Me takes diners on a whirlwind round-the-world tasting tour, with an à la carte menu divided up by continents and a tasting option that spans seven or eight destinations. Sounds like the kind of concept that's doomed to fail, but it works: their wacky sharing plates – crispy shrimp lollipops served with squid-ink yogurt dip, for example – have enough vim and self-confidence to carry the restaurant's high concept. Inventive, so-called 'culinary cocktails' round out the experience. 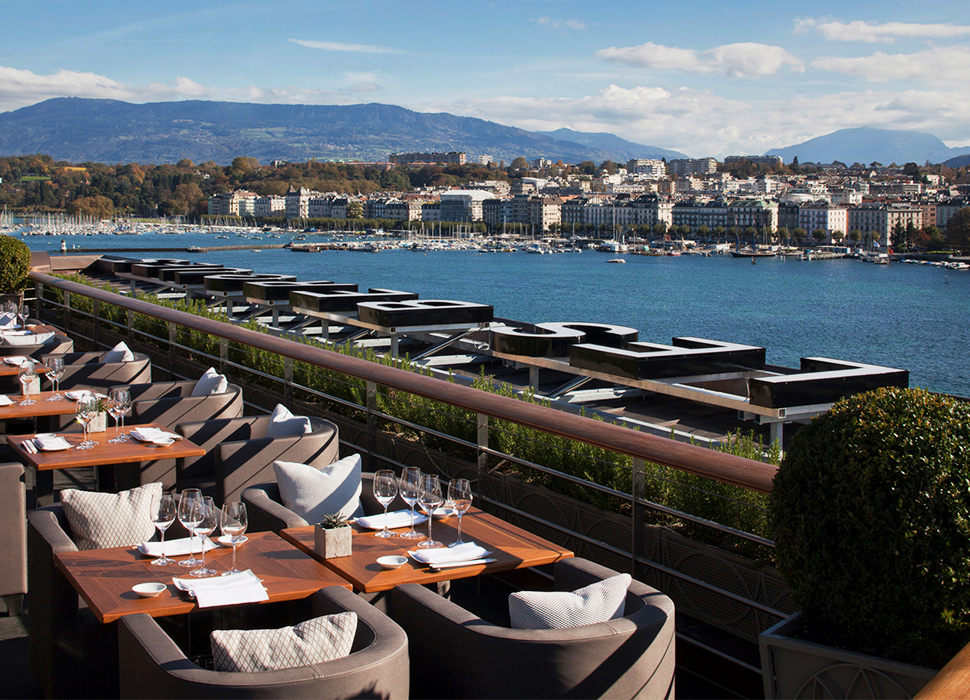 Lake views and modern Japanese gastronomy dazzle at this see-and-be-seen restaurant on the rooftop of Four Seasons Hôtel des Bergues. Chef Mitsuri Tsukada landed in the kitchen here by way of Nobu, and the influence of this fusion mega-chain is clear. Daring combos pair Breton lobster with foie gras and an intoxicating teriyaki and black truffle sauce, or sea bass sashimi with crunchy miso bits and yuzu juice. With a tasting menu priced at CHF130, the whole shebang doesn’t come cheap, but the splurge is worth it. 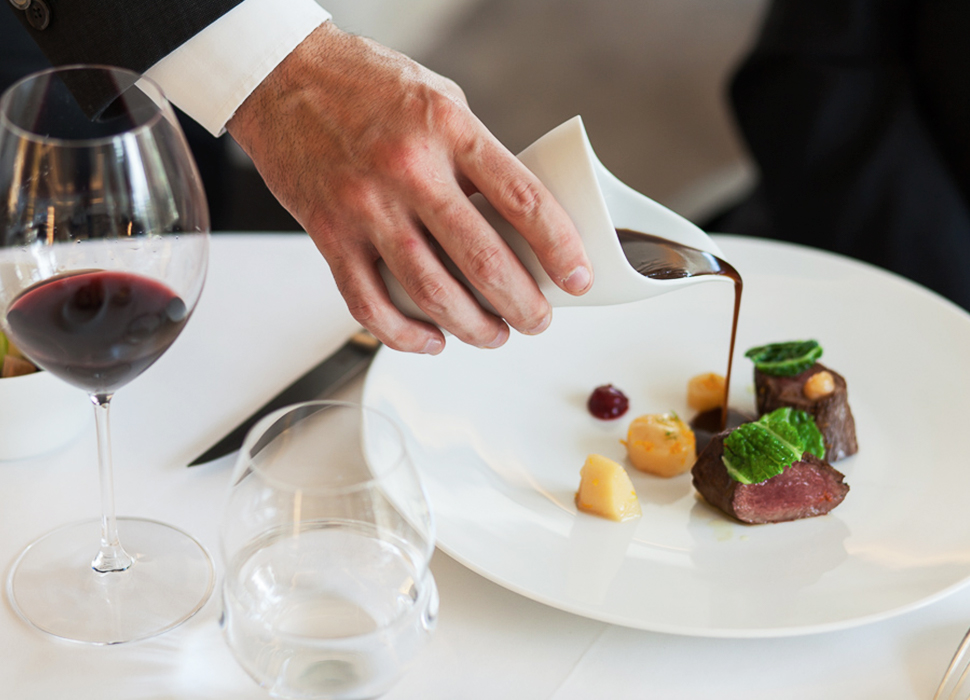 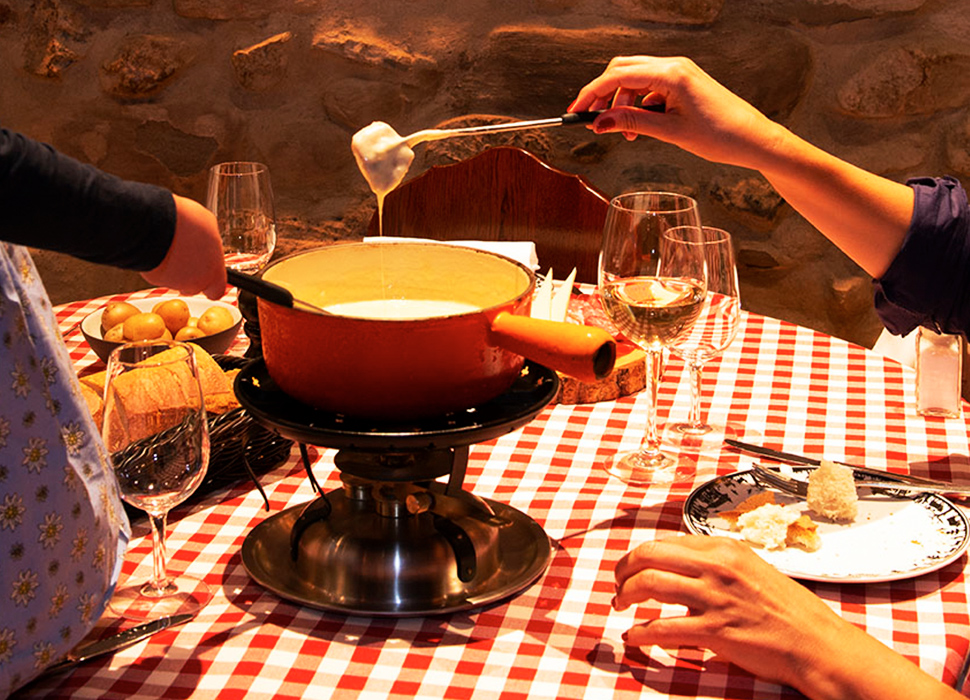 Housed in a 17th century townhouse in the Old Town, Les Armures is the high-society address for authentic Swiss cuisine. Zurich-style veal with potato rösti, hefty pork-and-sour-cabbage sausages, and tangy air-dried beef are all menu staples. But it's the cheese dishes that steal the show: gooey raclette is served, as tradition demands, portion by portion at the table, while the fondue moitié-moitié rightly mixes equal parts Vacherin and Gruyère. Hand-piped swirls of meringue with cream à la Gruyères – so thick it must be spooned – is the dessert par excellence.

This weekend brunch staple is a refreshingly relaxed antidote to Geneva’s luxe-leaning restaurants. Coutume was spawned in Paris by French barista Antoine Nétien and Australian Tom Clark, both of whom spearheaded the coffee revolution in the French capital in 2010. The roaster’s arrival in Geneva has been equally game-changing, marking a new chapter in the city's stuck-in-time café culture. An international menu features bacon-and-egg breakfasts of all sorts, health-leaning poké bowls, avocado toasts and pancakes smothered in a smorgasbord of indecent toppings – all accompanied by the finest single-origin cappuccino, flat-white or slowly filtered Chemex in town.