Fancy hooking up online with other anglers near you? A new Scandi app is making fishing big news this year. We try it out, but will we become a fisherman’s friend?

First came the colouring books. Then the ‘mindful’ craft projects. Then meditation apps, wild swimming and a brief flirtation with sound baths. Now there’s a new must-try hobby that promises to impress our peers and soothe our frazzled brains. Here’s the hook: fishing is cool now.

While it’s long been one of the world’s biggest participation sports, in the last year your granddad’s favourite pastime is reeling in a new crowd. Celebs including David Beckham, Emma Watson and Rita Ora have all declared their love for a spot of angling or fly-fishing. There are glamorous fishing influencers, like 30-year-old Marina Gibson, who has 55,000 Instagram followers hanging on her every catch. And now growing numbers of millennials and gen Z-ers – particularly young women – are picking up a rod as a way to switch off, unwind and reconnect with nature. It’s wellness in waders. 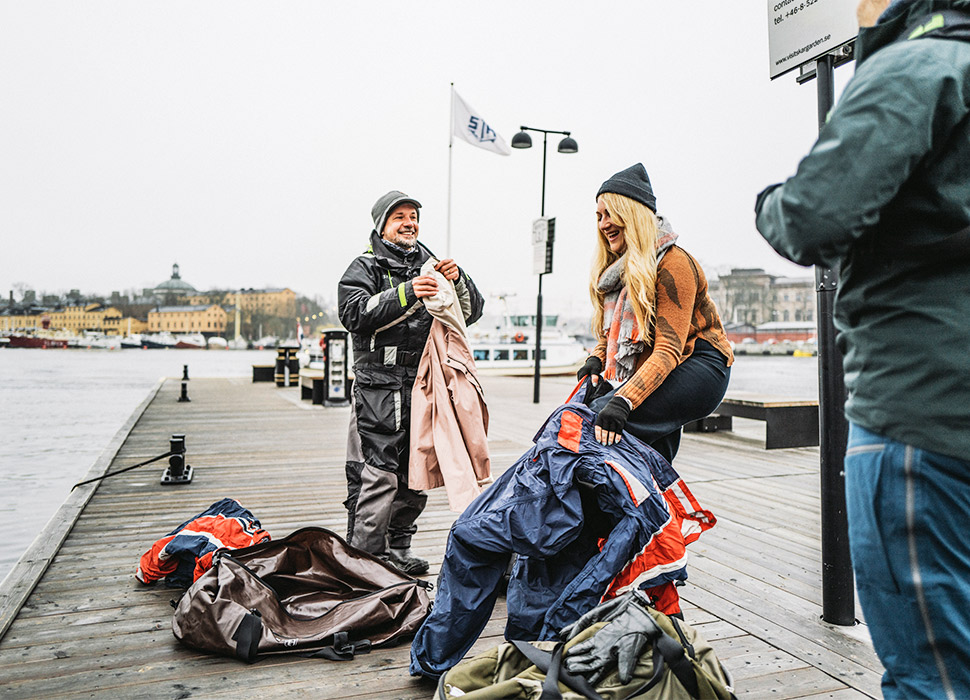 Wrapping up against the chilly Stockholm winter

Don’t believe me? Just ask entrepreneur Johan Attby, founder and CEO of Fishbrain, the world’s biggest social network for fishing. Twice named one of Europe’s hottest startups, the Stockholm-based app has more than nine million users worldwide – and it’s evolving fast. Like a digital reimagining of the traditional angler’s notebook, Fishbrain users upload photos and details of their catches, follow other enthusiasts and create their own personal archive for free, while the app’s paid-for forecast functionality analyses all this data and over 30 geographical attributes, including climate, air pressure and wind speed, to help users work out when, where and how best to land their perfect catch. Today, that includes me.

“That’s a perfect cast. You’re a natural,” says our guide, prize-winning angler Peter Berggren, as I fling my baited hook into the distance with a satisfying plunk.

This seems implausible considering a) I’ve never fished before and b) the only thing I can reliably throw is a shape on a dancefloor, but I’ll take it. Right now I could be across the bay, getting my groove on at the ABBA museum, but instead I’m in a boat in the middle of Djurgårdsbrunnsviken, one of the many scenic bays around Stockholm’s archipelago – frosty and majestic in the middle of winter – and where Fishbrain shows 86 recent pike catches logged in this particular stretch of water. 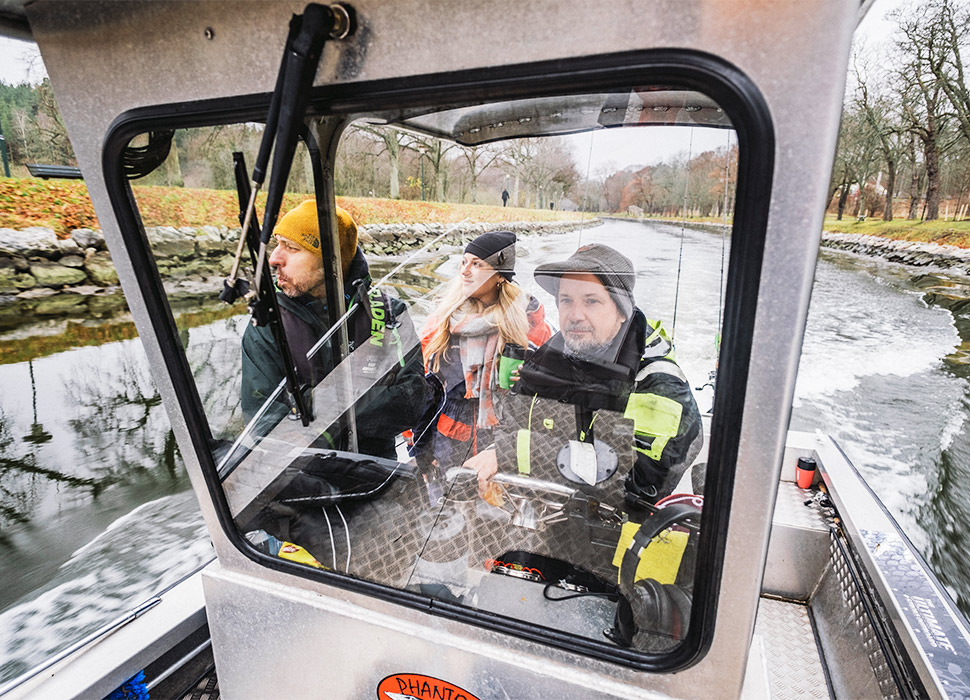 Heading out to the open waters

Consistently ranked as one of the world’s least polluted capitals, Stockholm also boasts some of the clearest water, making it ideal for a spot of urban angling. No licence is needed to fish in the city, and salmon and trout stocks are replenished in their tens of thousands every year to feed amateur demand. “If we were here in the summer there would be boats everywhere,” Berggren tells me. But for now it’s just us, the distant spires and peachy-hued palaces of Gamla Stan, and a couple of stately herons.

I am completely – although I’m told my thermal onesie is buoyant – out of my depth. If I’d grown up here, things might be different. According to the Swedish Agency for Marine and Water Management, 1.3 million Swedes fish at least once a year; around 12% of the population. “You start fishing when you’re a kid, then for many it becomes a lifelong hobby,” Johan says. 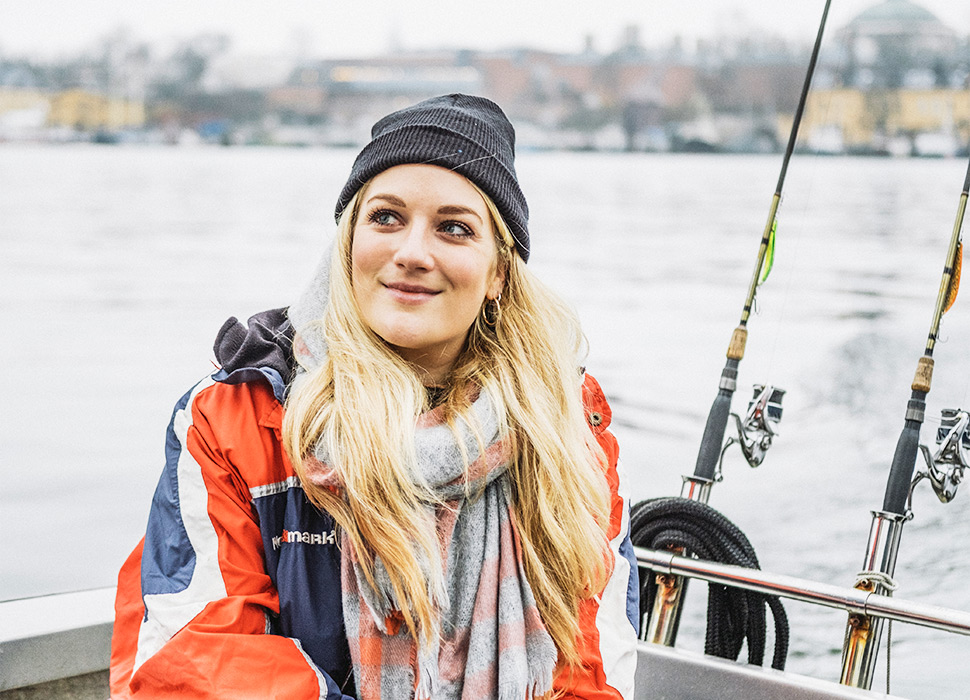 Our writer realising she's beginning to get hooked on fishing

Still, the inspiration for Fishbrain didn’t strike until 2012, after a stint in Silicon Valley. Looking for a new venture, Johan stumbled across a list of the world’s 10 largest-participation hobbies. Fishing was number one. “It’s a market that is very much under the radar, but there’s the passion, the engagement and definitely the spend.” In the US alone, fishing is a $48 billion industry. To put that in context, the entire global music industry is only worth $20 billion. That’s a lot of potential net profit.

But passion and engagement are equally important. Like Strava for cycling, Houzz for home design and Reverb for musicians, Fishbrain is part of a growing trend for ‘vertical’ social networks that feed less on ‘compare and despair’, and more on care and share.

“Facebook or Instagram, that’s 100% bragging,” says Johan. “But when you think about your hobbies, your passions, you’re in a positive mindset. You want to help people out.” You can cast out any ideas about fishing being a hobby for gruff old men whose preference is to sit on a gloomy riverbank in silence. “The biggest misconception is that fishing is something you do in solitude,” Johan continues. “More often fishing is a social experience.” 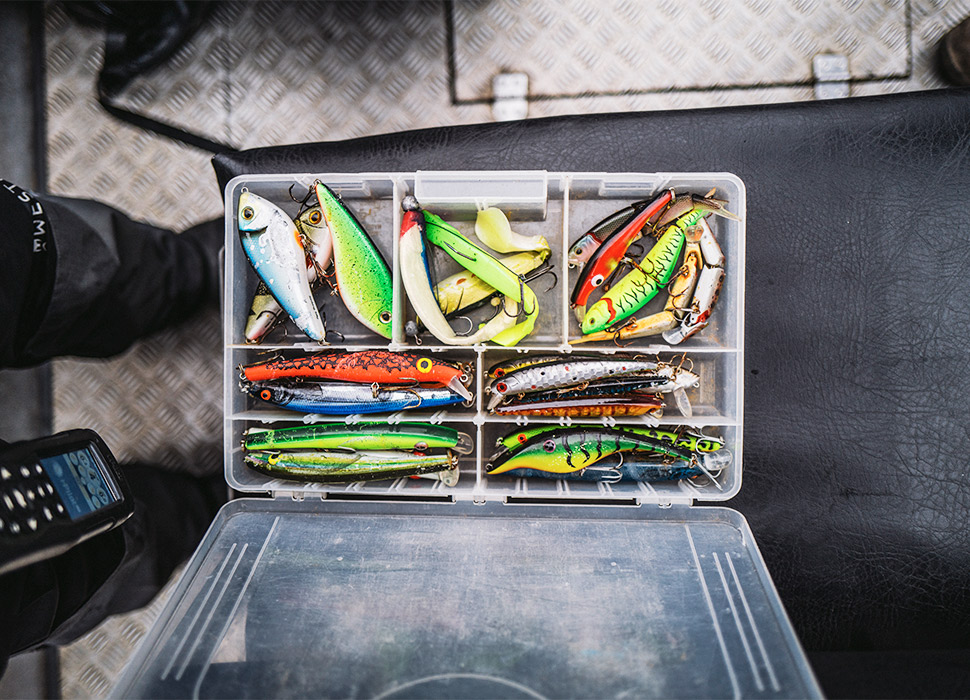 Go on, take the bait

Fishbrain exists at the intersection of two seemingly contradictory forces: on the one hand, the desire to switch off from the relentless pressures of modern life and on the other the compulsion to share evidence of your switch-off because… Look how photogenic this lake is! But the trick to getting younger generations outdoors, Johan believes, is “to augment the analogue experience with the digital one”. I admit I’m relieved to find that in Stockholm, even the Baltic Sea has perfect 4G reception.

I’d been worried about buckets of squirming maggots too, but thankfully today’s bait is inanimate: fish-shaped plastic lures in rainbow-bright colours. Pike, I learn, are indiscriminately greedy. “They’ll just try to eat whatever comes along.” I find myself identifying with the pike.

There’s also more conscious consumption on the menu. While a hobby as primitive as fishing might feel at odds with the rise of veganism and eco-anxiety, sustainability is part of Fishbrain’s mission statement. Around 80% of catches logged on the app are ‘catch and release’, where the fish lives to swim another day, and the company freely shares all the data it collects with marine conservation organisations. 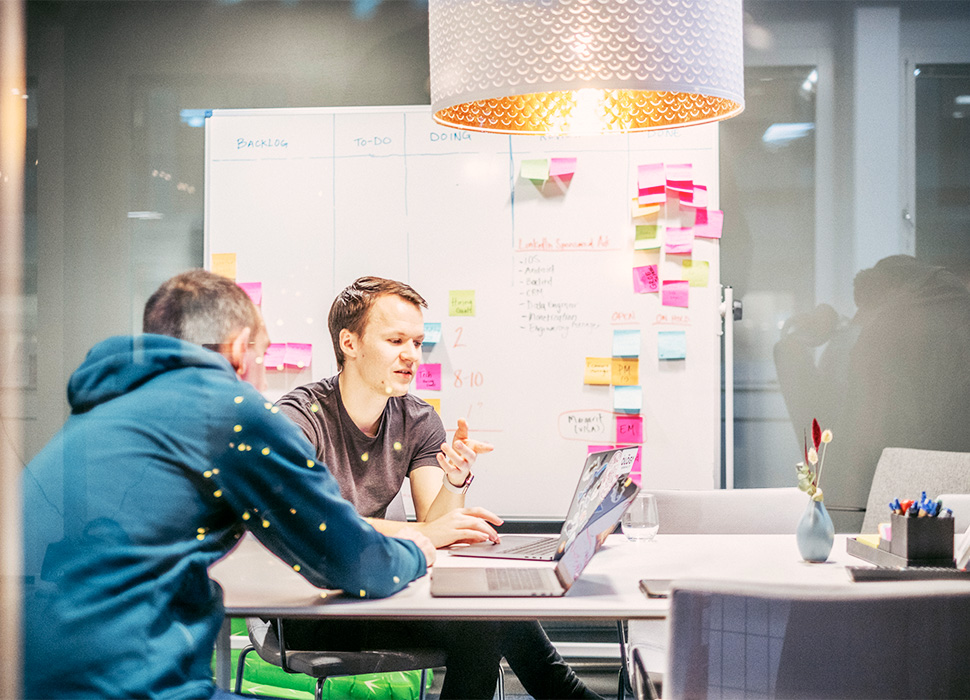 Fishbrain is where modern tech meets the ancient pastime of angling

Beyond ecological awareness, young anglers are keen to promote the therapeutic benefits of a day on the water. We could even call it friluftsliv (pronounced ‘free-loofts-liv’), the handy, pan-Scandinavian word that sums up the curative power of spending time in nature. With rafts of research suggesting that as little as 20 minutes outdoors can be enough to boost immunity and lower stress levels, friluftsliv is all set to be the new coorie – which was the new lagom, which was, of course, the new hygge. But this time it’s less about candles and cashmere bed socks; more about downing tools and giving yourself over to the mercy of the elements. At Fishbrain, it’s quite normal for the team to go fishing on their lunch hour the way some of us might squeeze in a yoga class – or, more likely, eat a sandwich while hunched over a screen.

“For me, it’s about being out,” says Lena Köpcke, the brand’s chief of people and culture, and a keen advocate for friluftsliv. “It doesn’t have to be fishing. It could be hiking or biking or skiing, but it’s about being out in nature. Have a backpack on your back. Bring fika.”

The fika is an important detail. Back on the water, the pike might not be hungry, but I am. In 5ºC temperatures a flask of strong coffee and a plump, sticky cinnamon bun take on a near-medicinal purpose. We speed further away from the city and out into a wide expanse of Baltic Sea, the water a glass-smooth reflection of the steely grey sky, no other boats to be seen. The fish here are bigger, but more elusive. All is calm. Suddenly, Peter gets a bite. He wrestles with the magnificent sea trout for only a few seconds before the fish wriggles free, but it’s long enough to glimpse a whole new world of life below the surface. Shining, shimmering, splendid. Meanwhile, I am failing to live up to my early promise. After four hours, all I’ve caught is a few clumps of reeds. 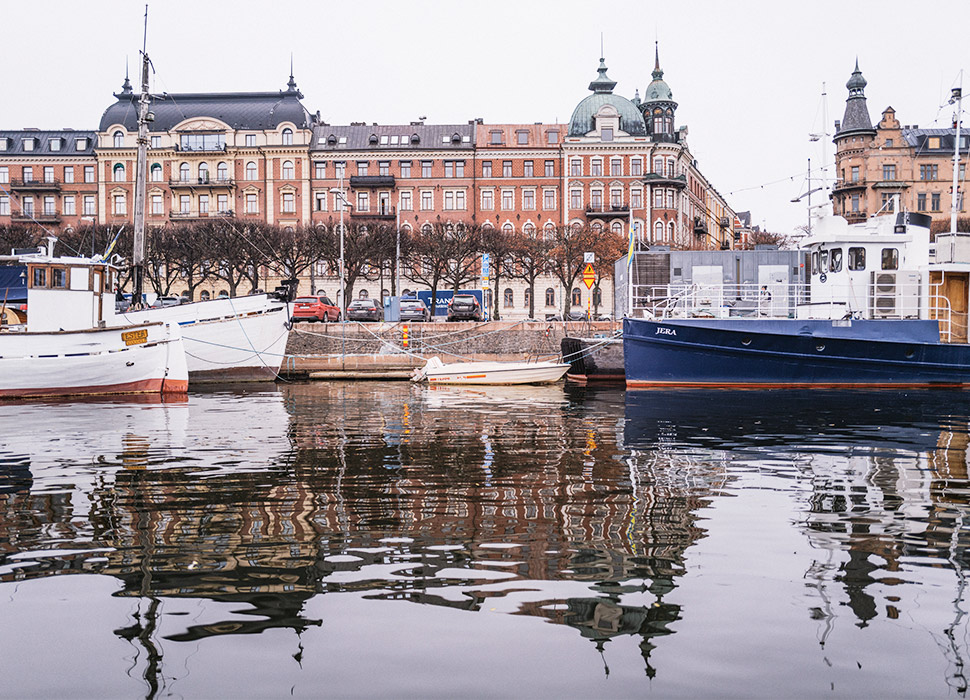 Stockholm's pretty harbour: a nice place to return to after a day on the water

But even so, the optimism is addictive. The tiniest twitch on the wire can make your heart leap into your mouth, while the rest of the world floats by unnoticed. It’s meditative, that rhythm. Cast, reel, hope, repeat. I can’t feel my fingers, but I could happily stay out for another four hours – just in case.

“I think that’s what makes it exciting – the unpredictability of it,” says Johan. And, in today’s world of instant gratification and competitive productivity, dealing with disappointment is part of the process too. “People think it’s all about landing the big catch, but it’s actually about the trip: the place, the people you’re with – the whole experience.”

“Even if you don’t catch anything, it can still be a great day on the water in Stockholm,” adds Peter.