Why Spain should be your next winter break

It may not be beach season anymore, but España still has plenty to offer travellers all year ‘round

Festive markets, snowy ski hills, and warming winter treats – no, we’re not talking about Germany or Switzerland. Spain’s tourist season may crest in summer, but if you ignore this diverse country during the cooler months, you’re missing a trick. Winter in Spain means less crowds and off-season hotel prices – giving you plenty of latitude to explore her iconic sites – plus all the sparkly seasonal magic you need. Here’s how to get the most of Spain when the last of the resort-dwellers pack up their deck chairs.

This winter sun stuff can be subtle – but if you want to go full-bore Xmas then visit a year-round Christmas shop in Basel. And then dig into our guides to making the most of your winter city breaks to Edinburgh, Stockholm and Copenhagen.

Eat and drink your way through Madrid 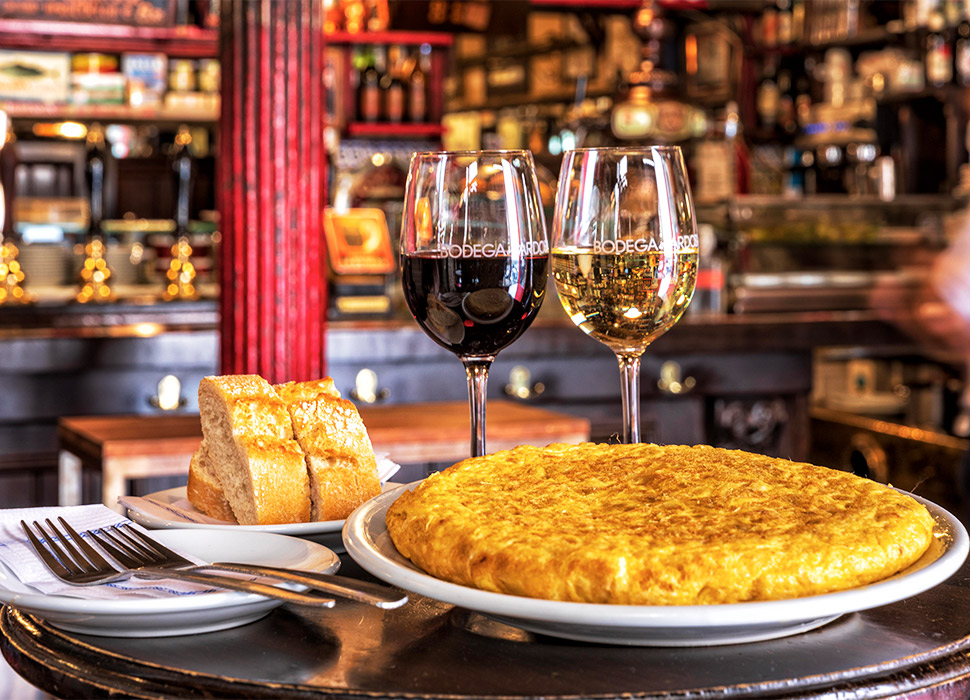 When travellers pinpoint Spain’s culinary capital, they’ll often land on Barcelona. But Madrid is really where it’s at – their arch-Spanish cuisine, incredible seafood, and knockout tapas joints all mix together to make the capital a criminally underrated destination for people who love to eat well. You can wash down small plates with some sherry at traditional joints like Bodega de la Ardosa and Casa González, or have your mind blown at wildly experimental Michelin star-holders like Diverxo or DSTAgE, or just kick back at neighbourhood joints like Sacha or Lakasa. Wherever you choose, it’s hard to go wrong – deliciousness abounds in this city. 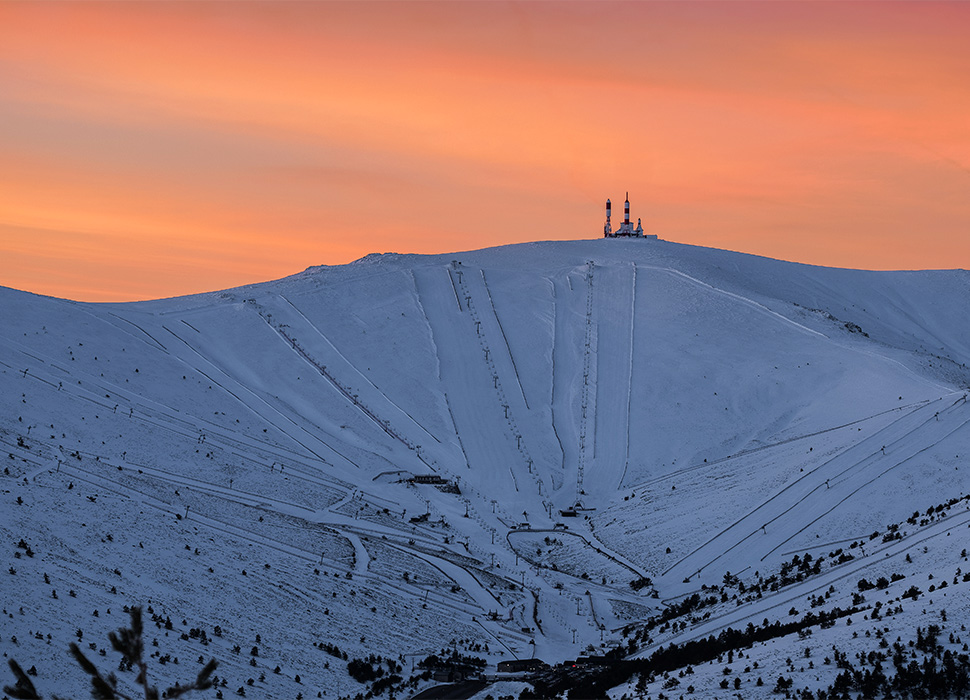 ‘Snowy mountains’ and ‘Spain’ might not go together in your mind, but this topographically diverse country has some behemoth hills that are pretty reliable for fluffy snow. Take Valdesquí – around 48km north of Madrid, this popular ski area boasts 21km of marked pistes and an elevation above 1,800m, which ensures decent downhill conditions from December through April. Near Barcelona, La Molina is the best place to carve some powder – this resort is situated in the mighty Pyrenees, and has more than 50 slopes to zip down, plus a large snow park for tricksters. 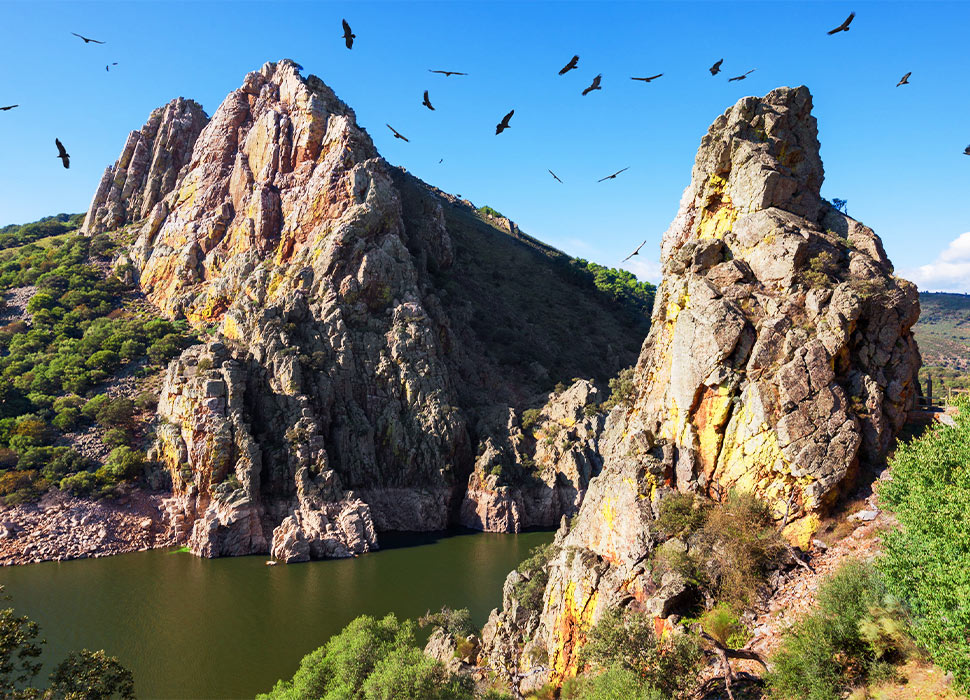 Mad about all things that fly? Parque Nacional de Monfragüe – about a two-and-a-half hour drive from Madrid – is well-known to birdwatchers across the continent for its incredible skyborne residents. These binocular-toting visitors all descend on the park in late February for the Extremadura Birdwatching Fair, where they can participate in seminars, hiking excursions, and other bird-themed fun.

Hit a hole in one 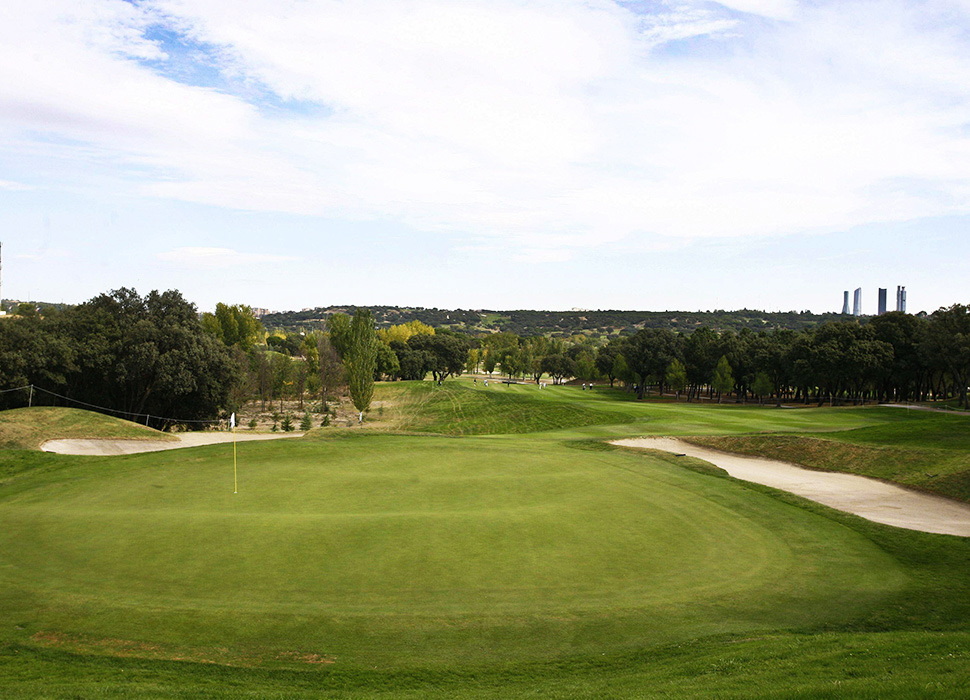 When it comes to ace golf courses, Spain’s got some very decent greens – and the country’s temperate climate means you can put and swing to your heart’s content all year ‘round. Your spoilt for choice near Madrid: take Club de Campo Villa de Madrid – boasting 10,000 members, it’s one of the largest sports clubs in Europe – or Centro Nacional de Golf, with a parkland-style course that spans 7,200 yards.

Get you holiday cheer on in Toledo 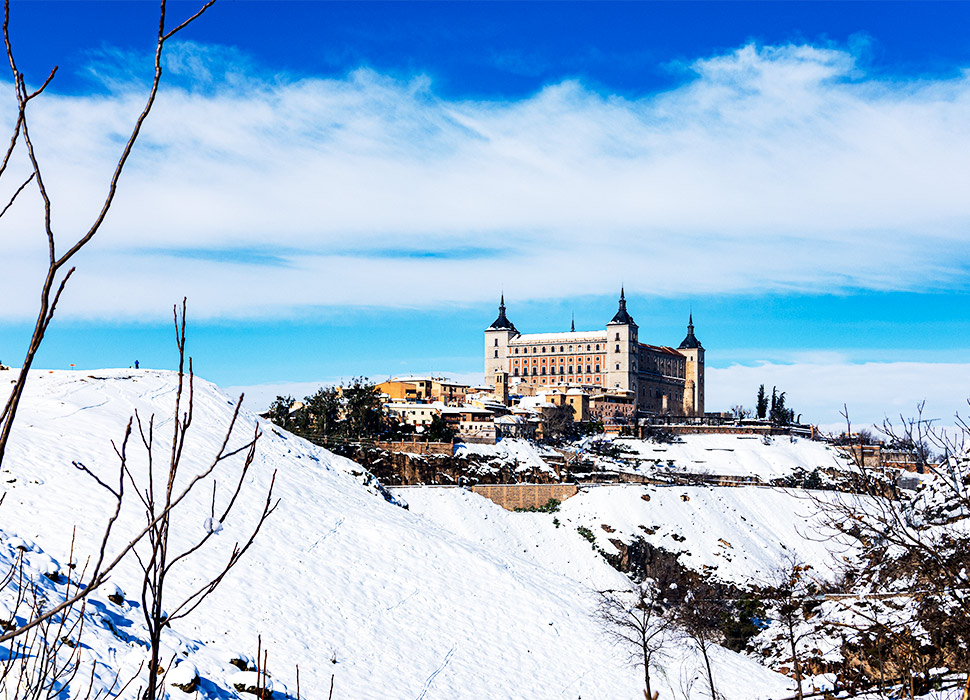 A swooning view of the Alcázar of Toledo / Image: Adobe Stock

If you’re after a bit of festive magic, nowhere does it better than Toledo – just 30 minutes outside Madrid, this postcard-perfect hilltop village is worth a day or weekend trip in December, when its cobbled streets are decked out in glinting lights and the Christmas market overtakes the main plaza. Be sure to sample the town’s favourite treat, marzipan, at Santo Tomé, which stocks confections made by entrepreneurial nuns.

Gaze up at the galaxy 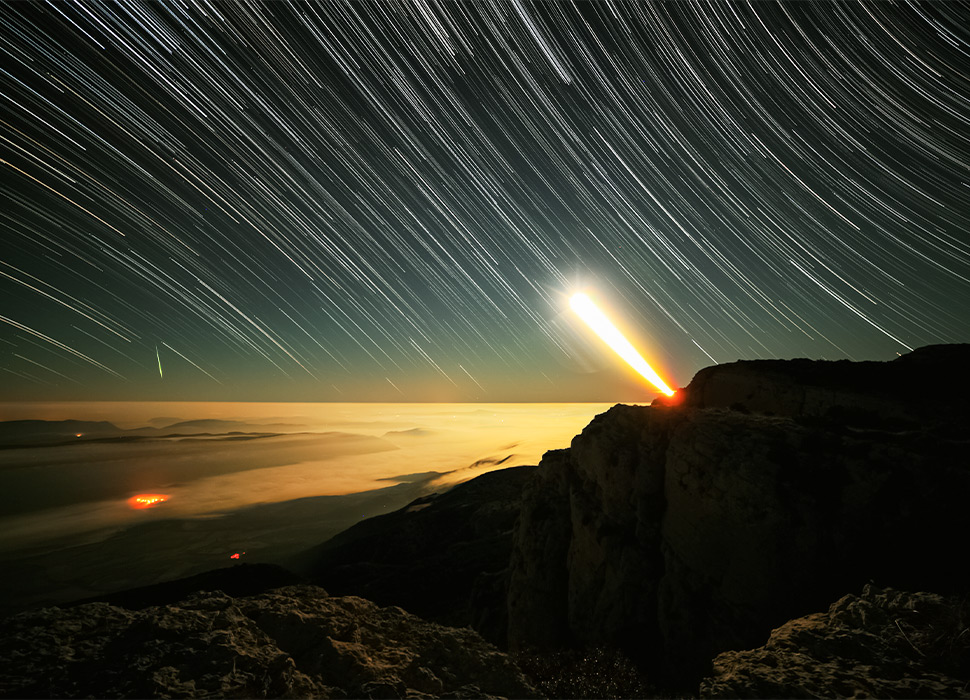 Spain’s starry sky is a sight to behold. The country is a big draw for astro-tourists, and winter – when nights are long and the skies are clearest – is the best time to gawp at the cosmos. The Montsec Astronomy Park near Barcelona offers guided stargazing sessions on their giant telescopes, plus multimedia tours of their planetarium. 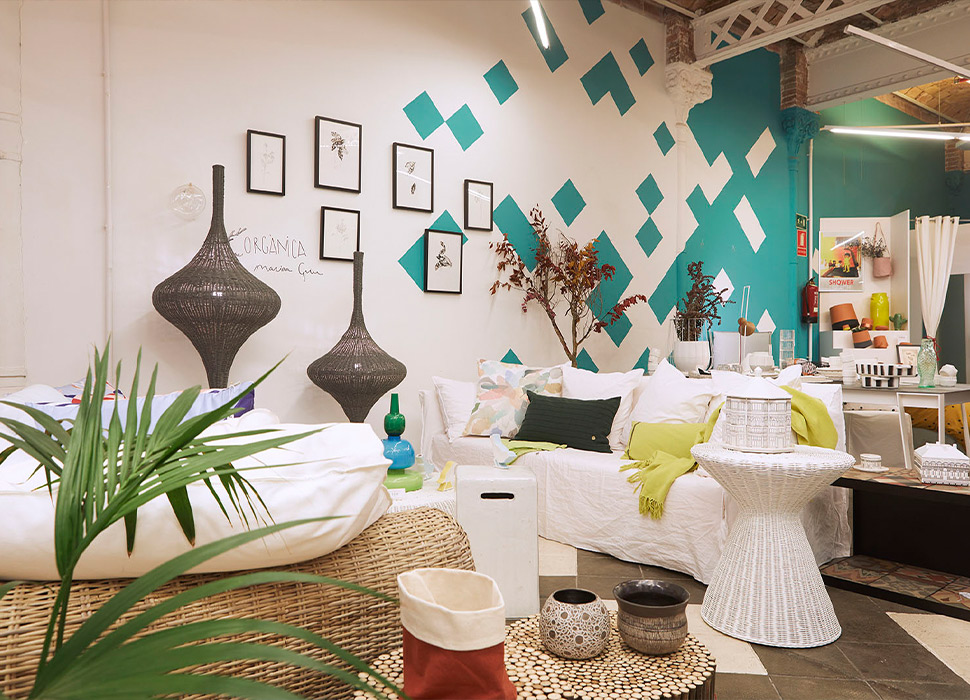 For those who like the finer things, Barcelona is a paradise. The city’s edgy concept shops will entice shoppers hunting for local designers, unique pieces, or that holiday gift to give your pickiest loved one. Hit up the pioneering Mar de Cava – one of the first concept shops to open in the city, and still among the best. Elsewhere, the calming Bon Vent flogs Mediterranean chic, while arty Nuovum puts the emphasis on the city’s ascendant design talents.

Get festive at Barcelona and Madrid’s Christmas markets 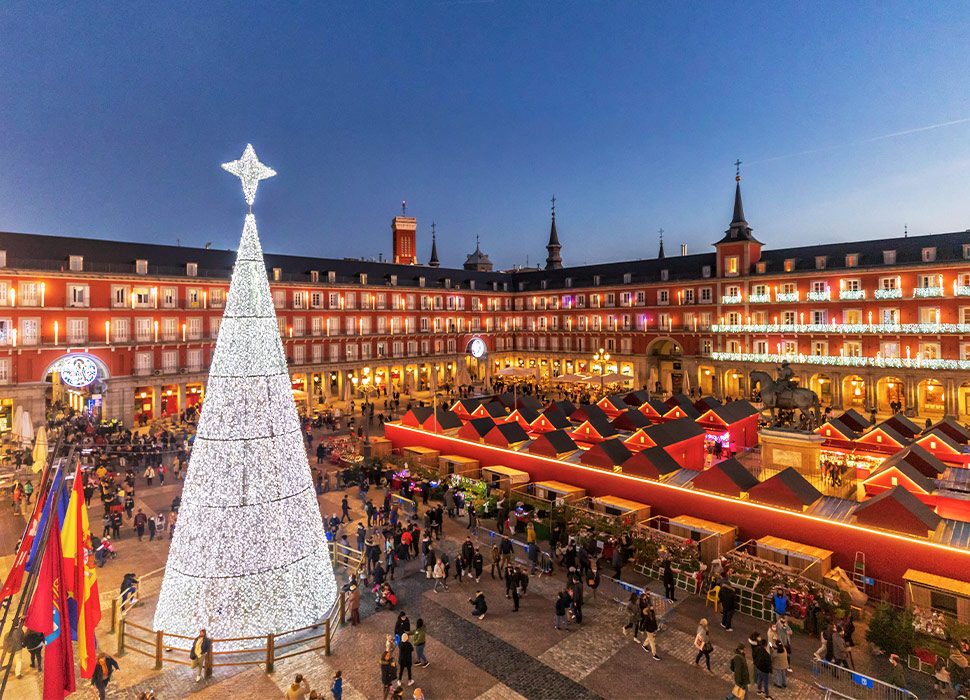 Tourists may flock to the traditional markets of Bavaria or Austria, but Spain offers its own take on the festive season, with markets that reflect the country’s unique regional cultures. The most classic of the Madrid offerings is Plaza Mayor, where more than 100 stalls light up the plaza and punters snack on traditional treats like sweet nougat turrones. Or, if you want to duck the crowds, try the more low-key Fiera-Mercado de Artesanie de la Comunidad de Madrid, where local makers sell their wares. In Barcelona, markets have a distinctly Catalan flavour. Head to Fira de Santa Llucia, the city’s biggest market, where you can snap up an adorable Caga Tio – a beloved mascot that takes the form of a smiley-faced wooden log.