The best diving sites and schools in Tenerife

With cathedrals of volcanic rock, rays lurking on seabeds and wrecks harbouring octopus, there’s enough underwater excitement to make Tenerife one of the best dive destinations in Europe. Here are this Canary island’s top dive sites – and the dive schools that can help you visit them 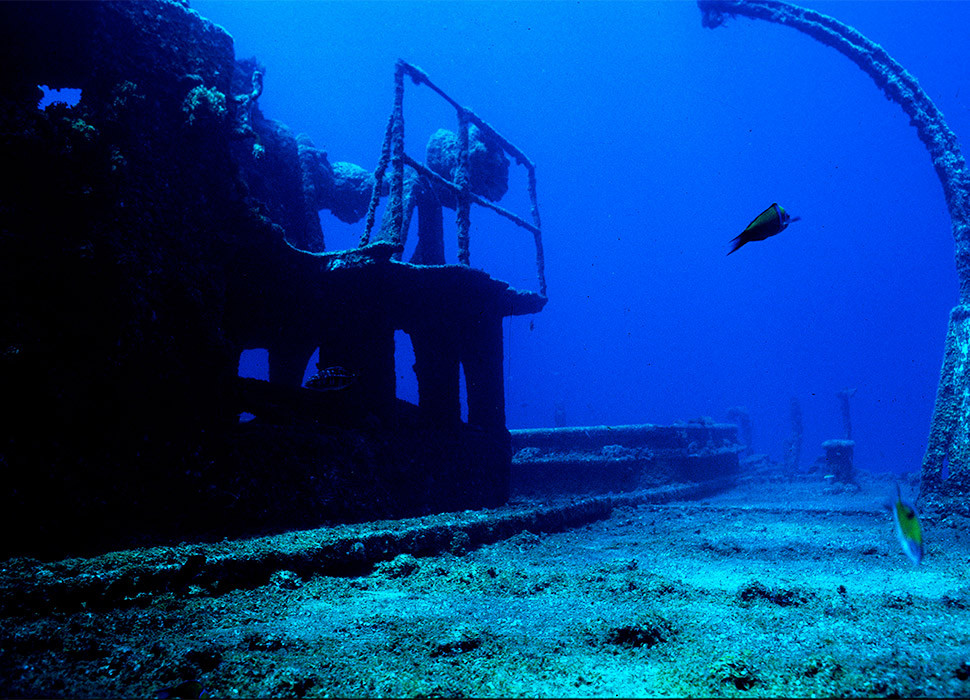 Lying crumpled on the seabed just 3.7 nautical miles from shore, ‘El Condesito’ is the carcass of a 30m-long cargo ship now inhabited by octopuses, rays, Moray eels, parrotfish and sea stars. After sinking in the 1970s, the ship splintered into several parts that now sit at depths between 6m and 20m, making it suitable for everybody from beginners to experienced divers. The wreck is wedged into an underwater canyon with rock formations that’ll make your eyes pop out. 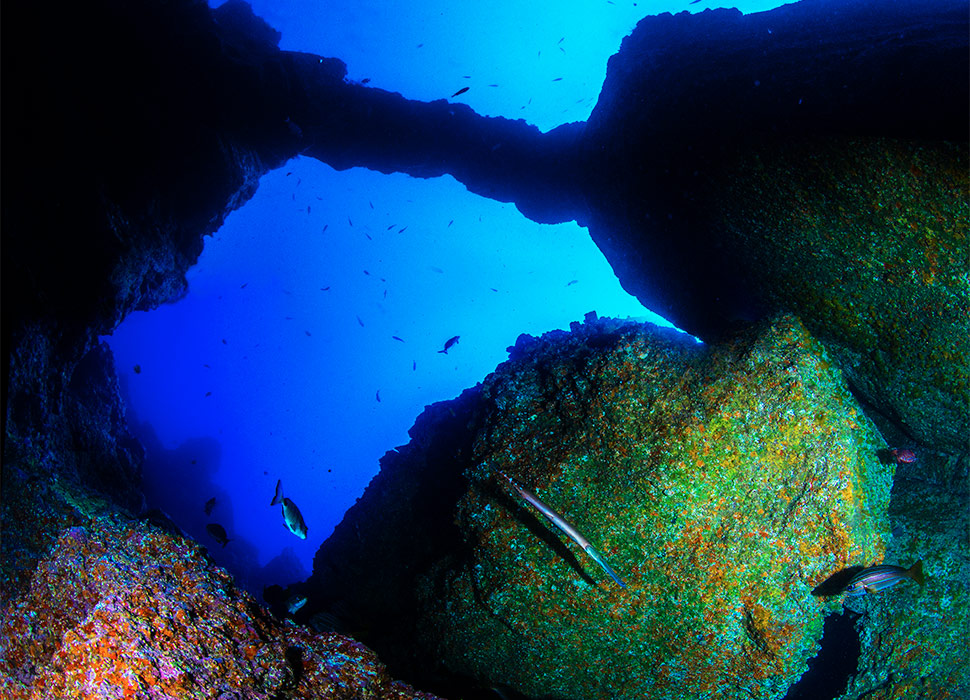 ‘The Cathedral’ shows that Tenerife’s landscape is just as defined by volcanic geology beneath the water as it is on land. The sweet spot of this dive in the north of the island is a gaping underwater cavern that stretches 20 metres high. There are smaller caves too, as well as arches and coral gardens to glide through, illuminated by prisms of light. Dives start with a 20m descent but can go as deep as 45m. 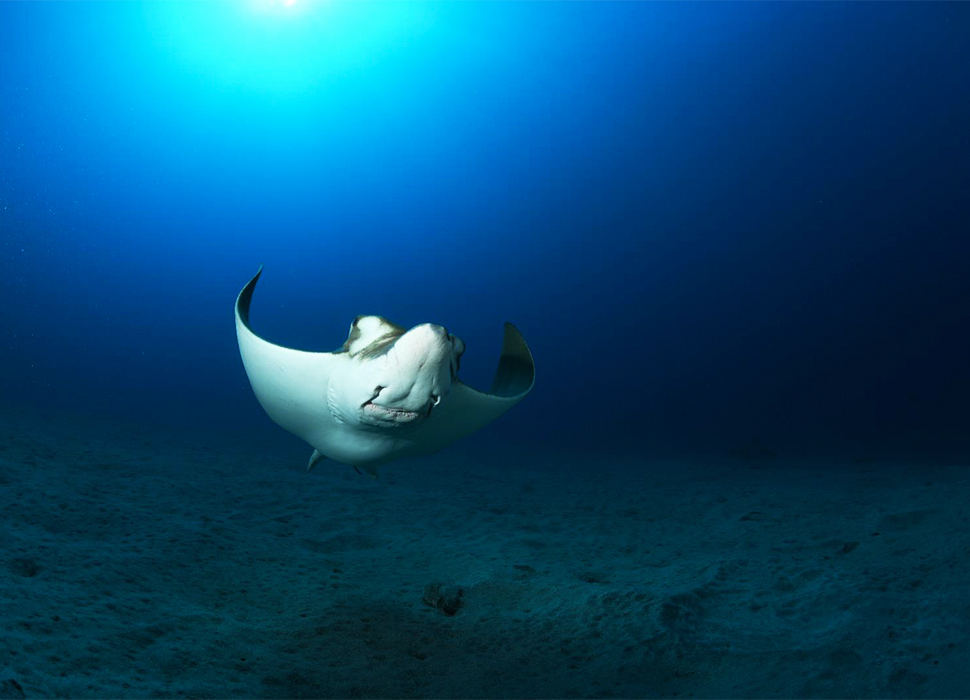 Near the southern tip of Tenerife, Playa Amarilla is a popular sunbathing and snorkelling spot because of its volcanic rock shelves, formed by thousands of years of erosion and plunging down to crystal-clear waters. The rock formations continue underwater and divers can wade out from the beach to find the Montaña Amarilla site, a lunar reef where stingrays, lobsters, crabs and angelfish frolic in caves formed from yellow volcanic ash. 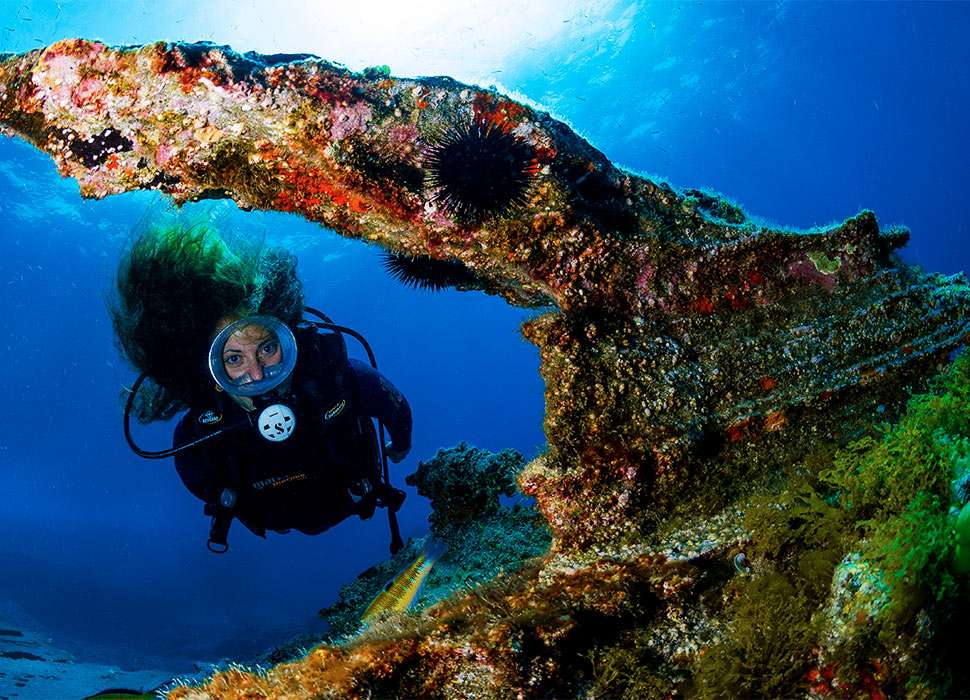 If seahorses, garden eels and angelfish aren’t enough excitement, how about an underwater statue of the Madonna? Scouring the walls for this algae-swathed 50cm-high stone carving is a highlight of diving El Porís in southeastern Tenerife. It isn’t as abundant in marine life as some other sites, but the fact that you can plunge in directly from quayside steps makes it a popular option – particularly for beginners. 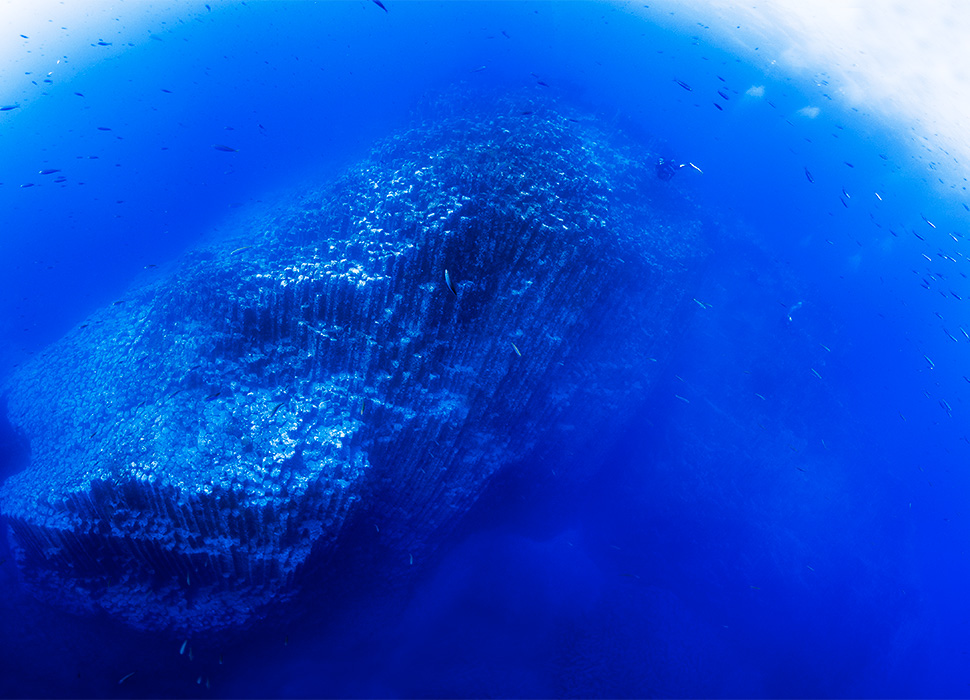 This sculpted undersea platform is one of the region's most feted sites / Image: Turismo de Islas Canaria/Sacha Lobenstein

It’s easy to see why La Rapadura off northern Tenerife has been dubbed the ‘Canarian Giant’s Causeway’. Its rocky platform, starting 25m down, has been sculpted so perfectly by the sea that it almost looks like Neptune took a chisel to the rock. The absence of algae makes the cascade of columns even more striking, and La Rapadura is considered one of Tenerife’s most spectacular dives. With depths of 40-plus metres and tidal conditions to consider, it’s one for experienced divers only. 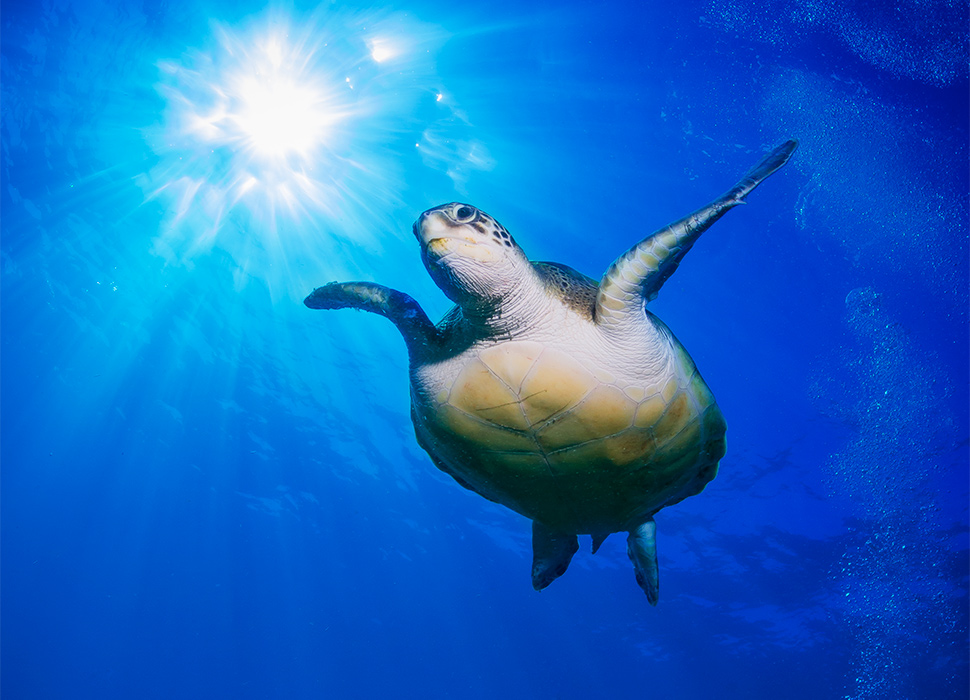 Families love this gentle beach dive in western Tenerife, partly because of the current-free, protected bay it’s in and partly because of the resident giant green turtles it’s famous for. Weighing up to 20kg each, the turtles are used to seeing snorkellers and divers, so sightings in these clear waters are almost guaranteed. Armeñime can get busy, so try to visit in the morning for a quiet, contemplative experience with these magnificent marine animals. 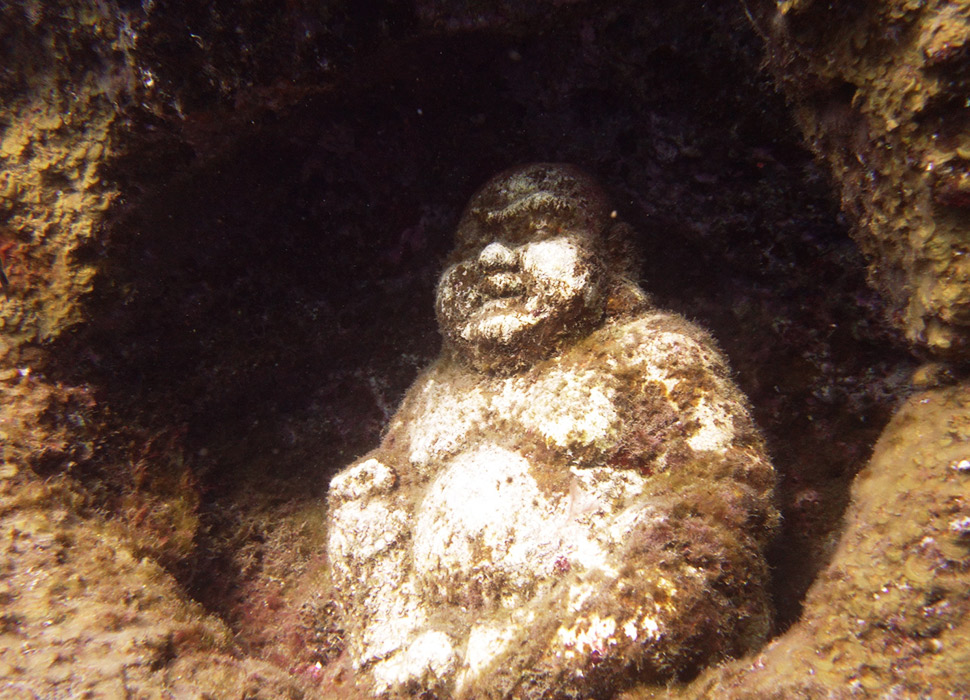 Taking its name from the village in southeast Tenerife where this dive starts from, Las Eras is full of surprises. Beautiful reef swarming with schools of barracuda, rays and angel sharks. Tunnel swim-through. Underwater Buddha statue. The tunnel starts at about 12m deep, but depths range from 5m to 35m and there’s so much to gawp at that it’s a popular repeat dive for all levels of ability. Access is via a sheltered beach. 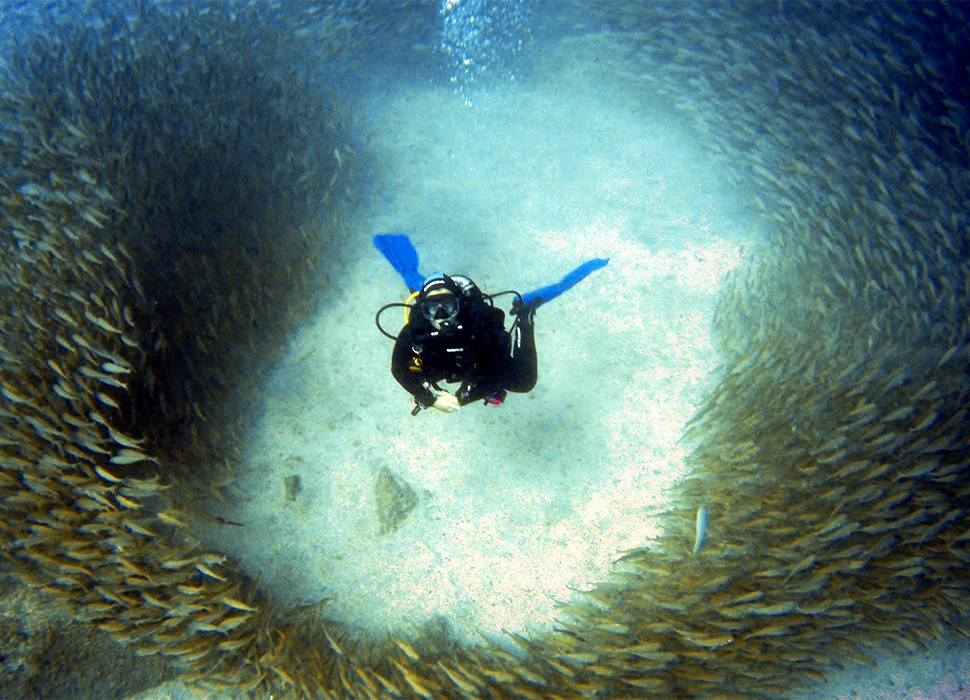 This five-star Padi dive centre runs guided trips all over Tenerife, including dives at Las Eras and El Condesito, and offers free transfers to its base at the Hotel Tropical Park in Costa Adeje. The hotel pool is a convenient starting point for beginners; kids aged eight or nine can try the ‘Bubblemaker’ experience and anybody aged 10 or over can do the ‘Discover Scuba Experience’, which finishes in the sea. 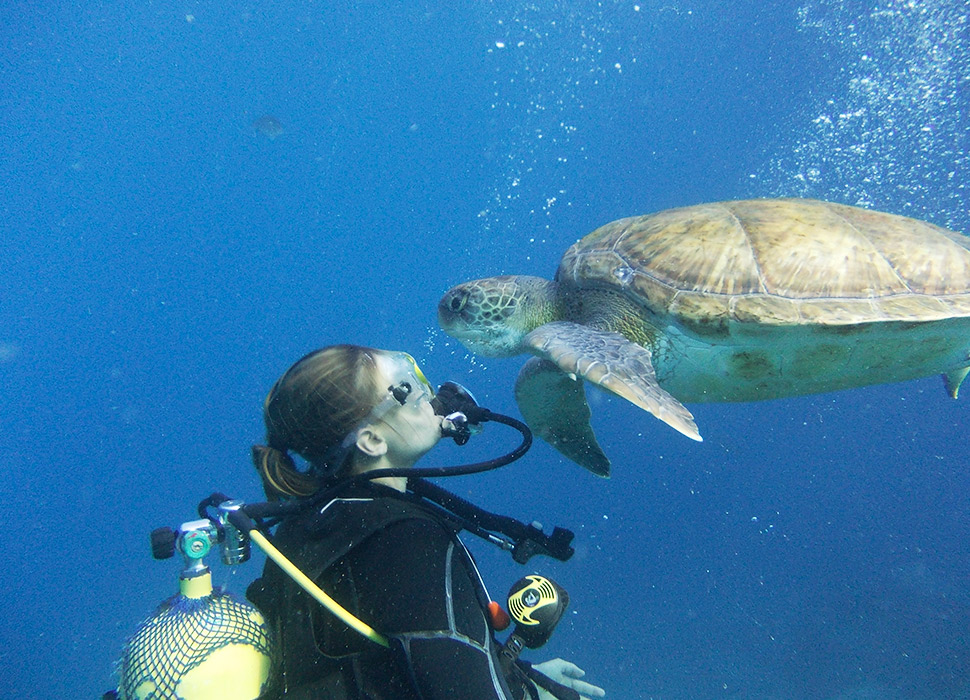 The British duo that runs Tenerife Scuba have racked up more than 30 years’ diving experience between them and have been in business since 2002. Chris and Sarah Barlow-Smith run their family-friendly operation from the Hotel Marino in Costa del Silencio near Las Galletas marina. As well as snorkelling trips, try-dives for beginners and guided dives, this outfit offers speciality Padi courses including wreck diving, night diving and deep diving.

Conservation is high up the agenda for this diving outfit in Costa Adeje. Trips with Atlantic Eco Diving include insights into the local ecosystems and marine conservation, as well as the opportunity to participate in cleaning the seabed. The dive centre also runs regular adapted diving trips with an adapted boat, suitable for people with physical disabilities.

5 mythical spots to seek out in Tenerife