From serene spring towns and fragrant cheeses to painted caves and totemic rocks, Gran Canaria ticks all the boxes. Here's our pick of the dream Spanish island

Done for the day? Lay your head at one of the best hotels in Gran Canaria.

And when you've worked up a ravishing hunger, check out our list of the best restaurants in Gran Canaria. 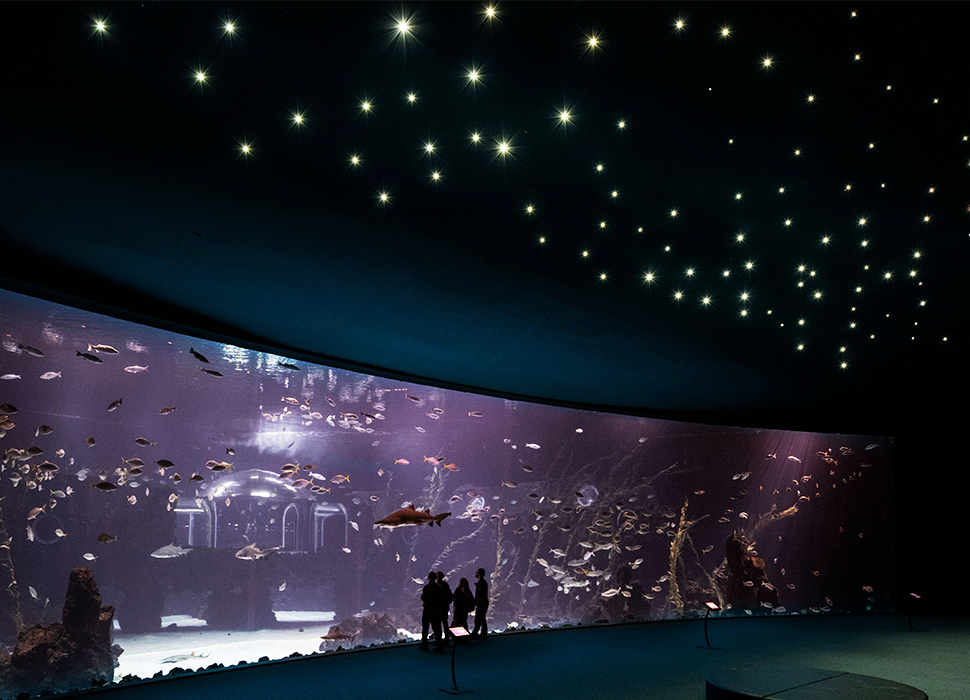 The dreamy aquarium is as much a draw as the sealife itself / Image: Alamy

Named, pretty romantically for a gigantic aquarium, after a set of paintings by local surrealist painter Néstor Martín-Fernandez de la Torre, Poema del Mar is a tribute to life under the sea. Divided into three zones – shallow water ecosystems, deep water ecosystems and freshwater species – the setting is lavish, with moody lighting and the knockout spectacle of the largest curved-glass window ever built, anywhere. If looking after fish is an art, the folks behind this place have produced a masterpiece.

2. Get stuffed at Mercado del Puerto 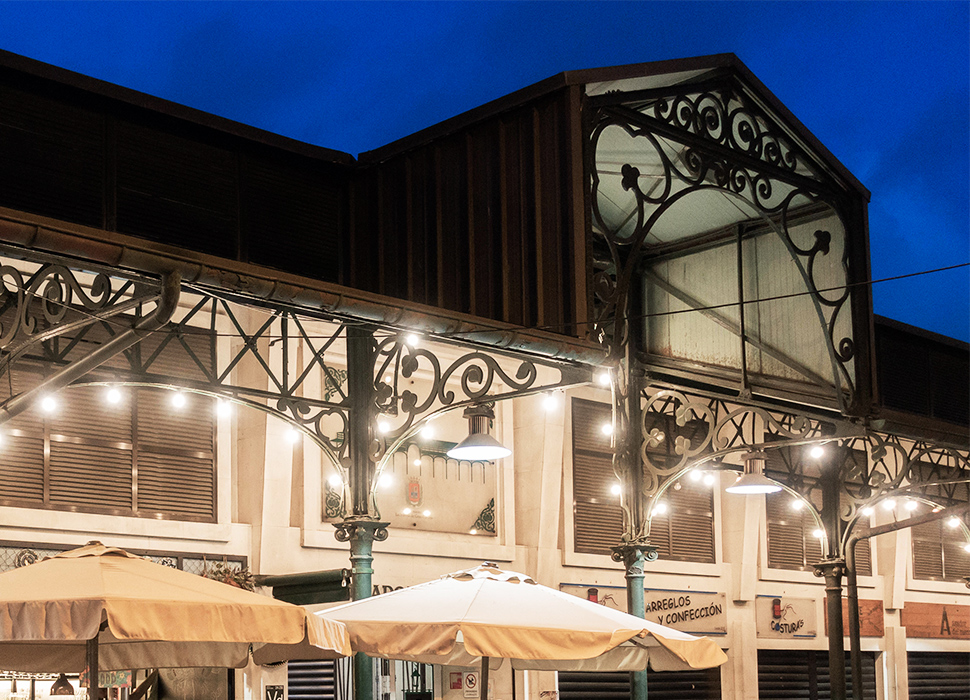 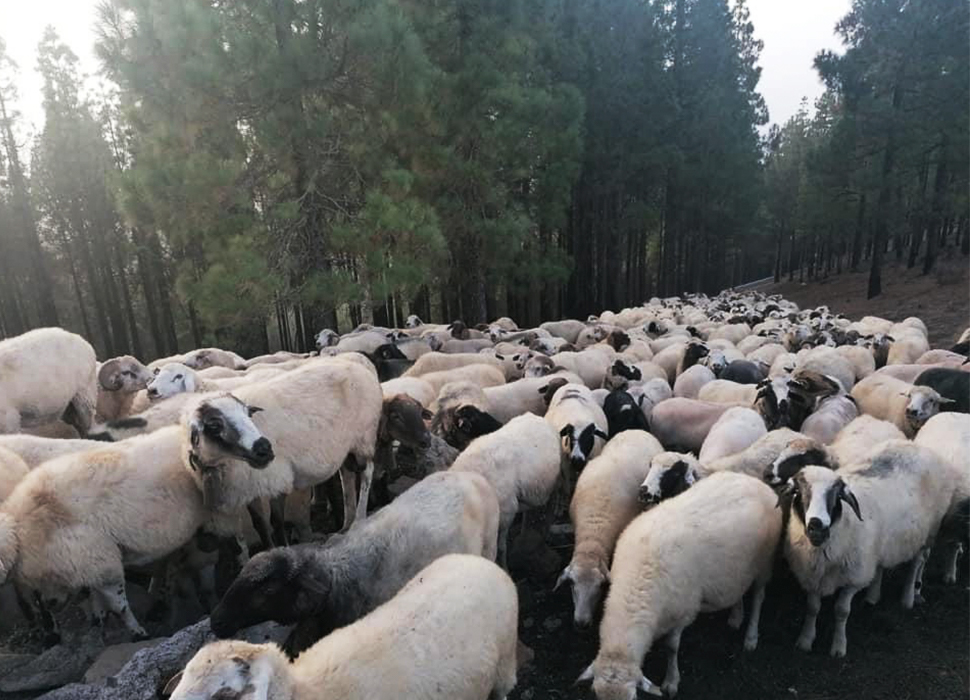 "What on earth is flower cheese?" you may well ask. It’s a distinctly Canarian delicacy, whereby the milk of sheep is curdled using the painstakingly harvested juice of artichoke thistle, as opposed to the regular method used in basically every other cheese. This makes for a fragrant, yielding mouthful that locals Cristóbal Moreno Díaz and Benedicta Ojeda Almeida have quite rightly won international plaudits for. Check out their artisan cheesery in Gáldar, say hi to their flock of sheep and take home a wheel of proper local flower power.

4. Cross a desert at Maspalomas Dunes 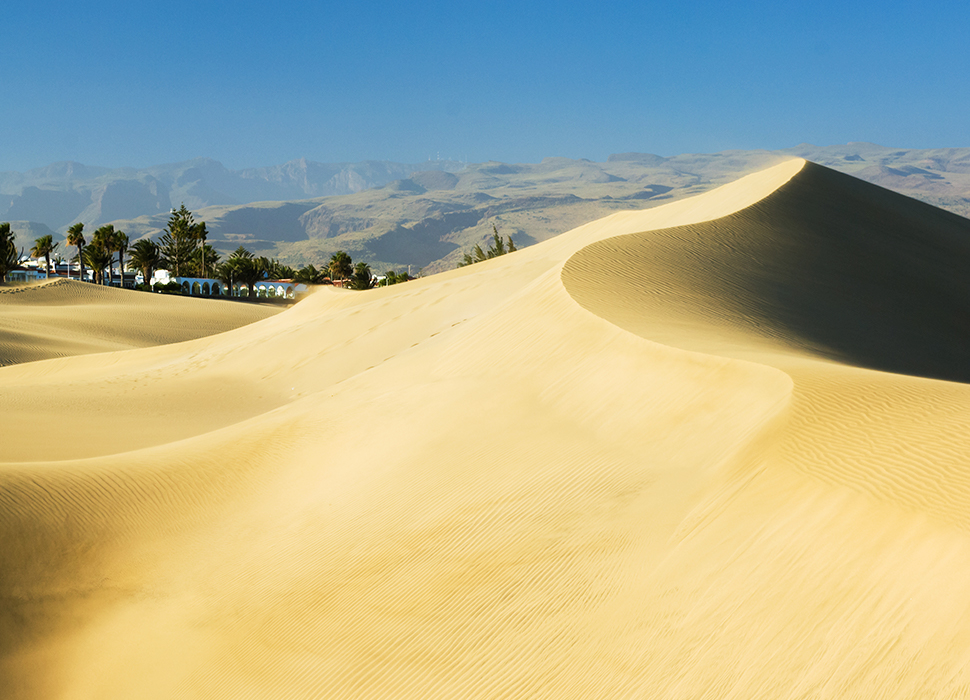 It's not a mirage – this really is a Canarian desert / Image: Adobe Stock

For the unique and cinematic feeling that you’ve been marooned in the centre of some vast boundless desert, make tracks for the Maspalomas Dunes in the south of the island. A protected nature reserve since the late 1980s, its uncanny resemblance to the Sahara makes for a surreal afternoon out. For the ultimate dune fantasy, you can even hitch a ride on a dromedary camel. Authorities are keen to keep the area as pristine as possible, so always stick to the paths. 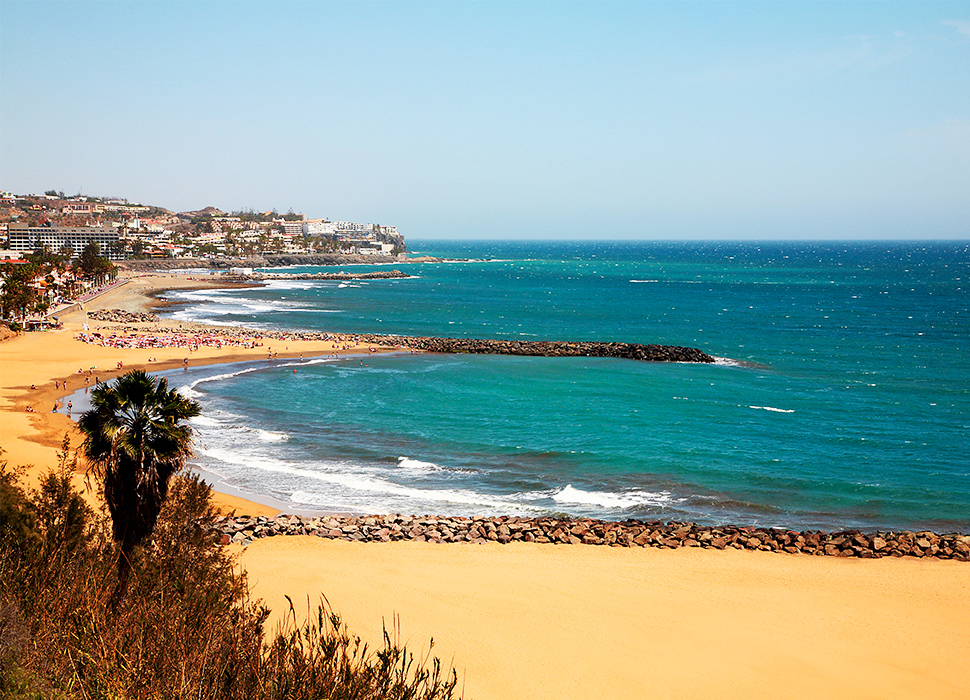 It's not high culture, but the 'beach of the English' is a singularly energetic nightspot / Image: Alamy

The so-called ‘beach of the English’ doesn’t have all that much in common with England, it must be said. It has a blessed climate, miles of white sand and a laidback alfresco dining culture that’s distinctly Spanish. But if you’re looking to enjoy a few drinks and go dancing until late among the carefree party people, Playa del Ingles is where it’s at. Every kind of hostelry, from faux British pubs to popping Euro-style karaoke lounges through throbbing dancehalls, are represented here and they don’t stop until you do. 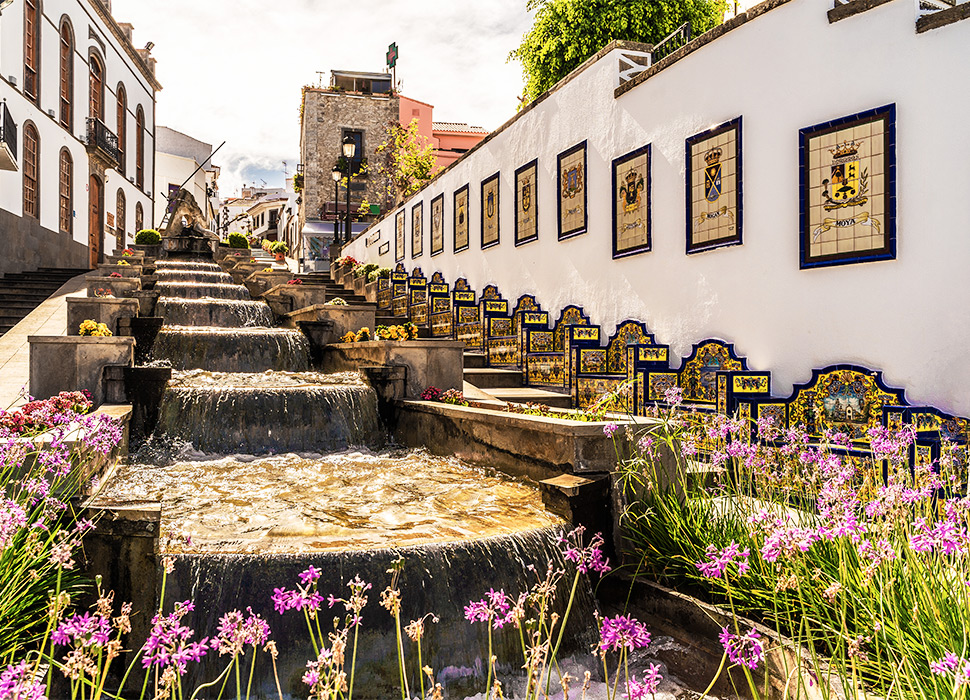 Known locally as ‘La Villa del Agua’ – the town of water – Firgas is famous for its verdant springs, and is the source for much of the bottled water you’ll find all over Gran Canaria. Firgas is proud of its association with the wet stuff, and its pride and joy – aside from a load of pretty churches and cutesy backstreets – is a 30m-long cascade waterfall running through the middle of town, studded with colourful murals and mosaics. Totes Instagrammable, and ultra-refreshing on a hot day, Firgas is the original Spanish thirst trap.

7. Bag a bottle at Bodegas Bentayga 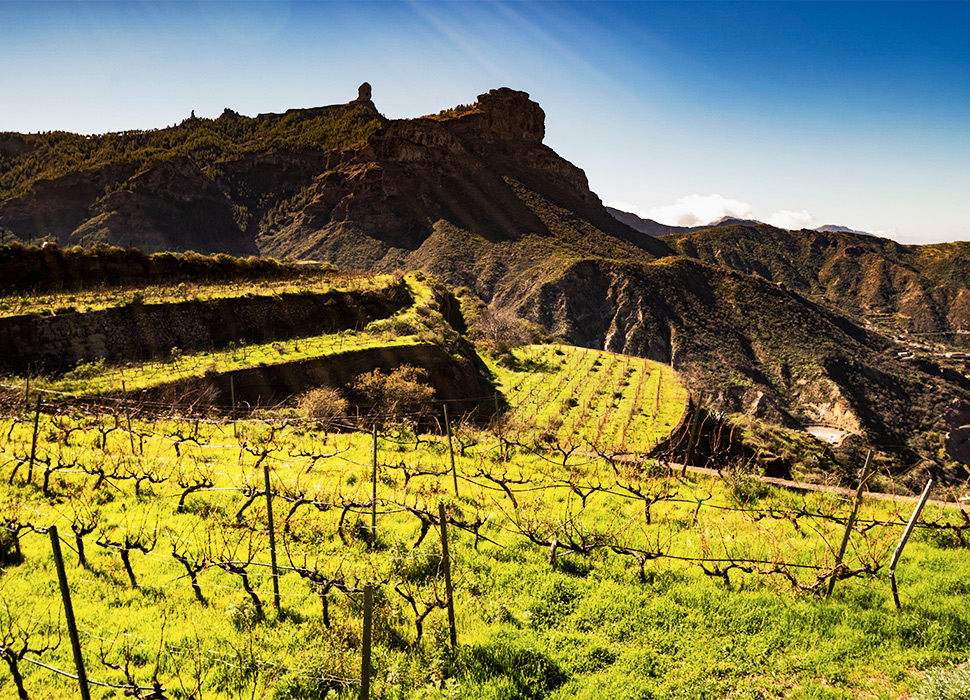 There are wineries, and then there’s Bodegas Bentayga. Situated in the picture-perfect setting of the central Gran Canadian mountain town of Tejada – against a backdrop of dramatic rock formations and stubbly slopes – the local volcanic soil creates ideal grape-growing conditions, especially when fed with crystal-clear mountain water. Book a tour to be shown around the most picturesque vineyards you’ll ever see, and then the ultra-modern ageing, bottling and tasting facilities in the winery proper. At 1,318m above sea level, it’s all enough to give you a head rush. 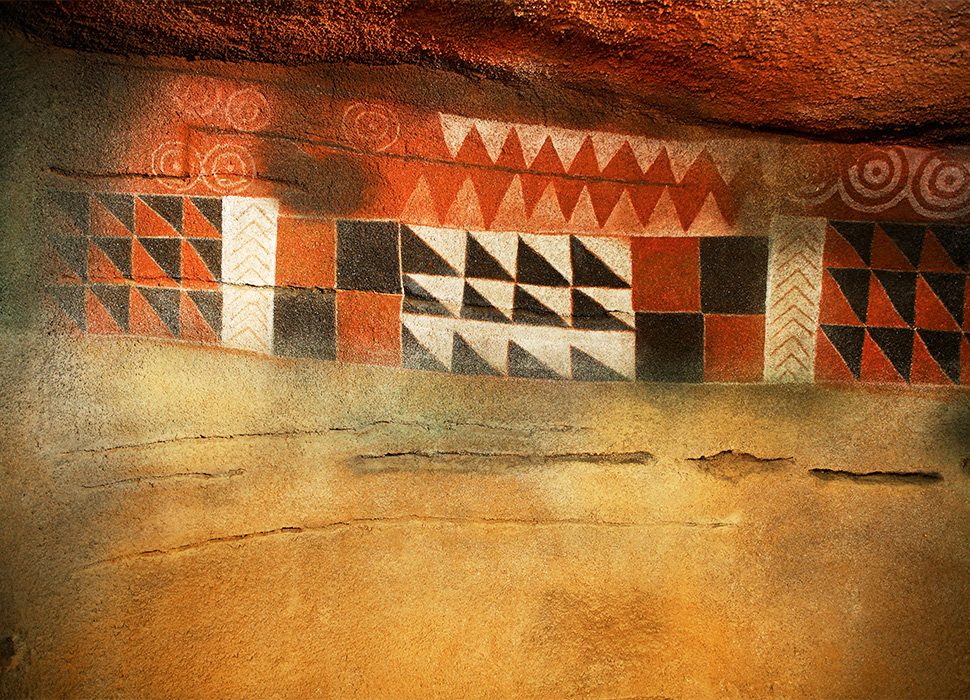 The Cueva Pintada – literally ‘painted cave’ – is an eyecatching relic of extinct visual culture from the people who called this island home long before the Europeans moved in. You’ll see for yourself the remarkably well-preserved and vivid geometric art that is still under active archaeological investigation and debate. Wander around a partially restored ancient village and marvel at the paintings, sometimes referred to as the Sistine Chapel of Canarian culture.

9. Rock up to Roque Nublo 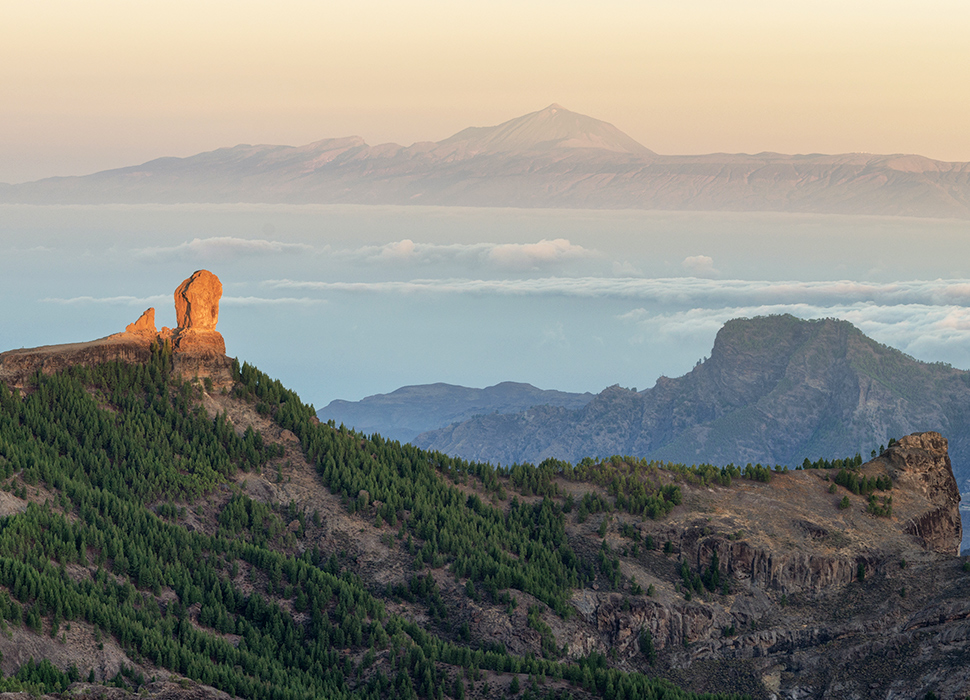 A view of Mount Teide from Nublo / Image: Adobe Stock

Revered as a sacred site by indigenous Canarians, Roque Nublo in Tejeda is an 80m rock formation believed to have been created as part of the volcanic turmoil that made the island of Gran Canaria itself. A modest 1.5km hike up through dense foliage from the car park and you’re there – on a nice clear day, you can see the whole island, and even spectacular Mount Teide over on neighbouring Tenerife in the distance. For best results, head up nice and early in the morning, where the occasional mist and fog shrouding the Roque makes for a rocking photo op.

10. Make it snappy at Cocodrilo Park 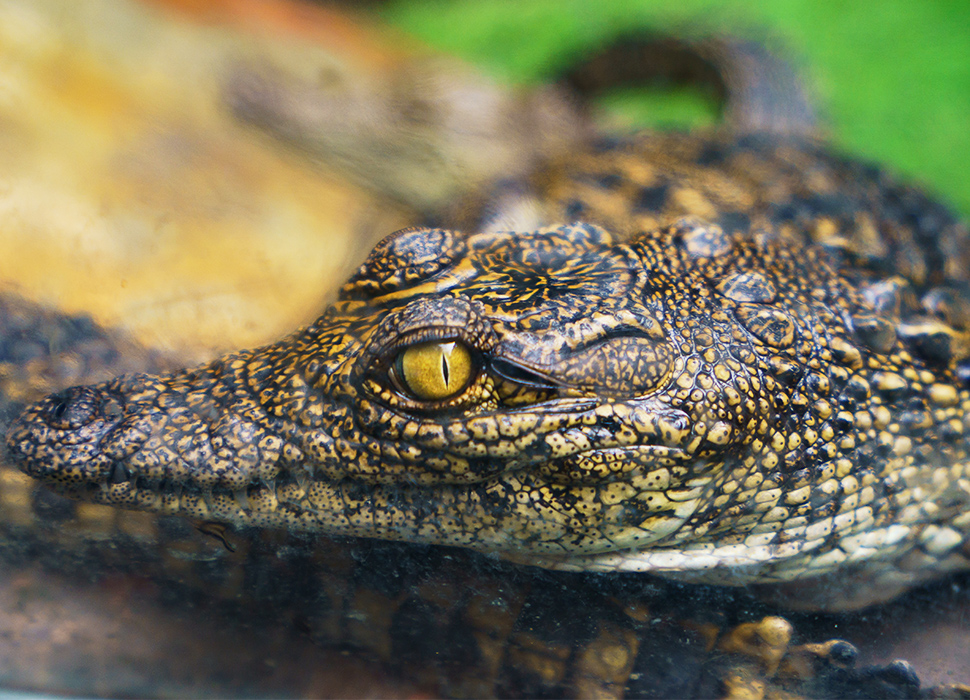 The story goes that Gran Canaria’s Balser family was asked to temporarily look after a few crocodiles back in the 1980s. After that, it seems, things just got just a little out of hand – to the point where over 300 of the sharp-toothed reptiles (one of them is over 5m long) now call the park near Agüimes home. It’s important to stress that this isn’t a zoo, as such. It’s a rescue centre, meaning every animal was salvaged from less-than-ideal private collections or cruel circuses. You may well have seen crocs before, but never on this scale.