The most stunning beaches in Spain

Spain's 5,000 miles of coastline will bag you some pretty dreamy lengths of sand – but how do you pick the best shore to lie on? Easy: you read our guide to the most beautiful beaches in the country

Spain is synonymous with summer holidays, and with good reason: its near-endless coastline really delivers the goods in terms of balmy, postcard-perfect, dream-making shores. As well from the classic strands of the mainland, the Balearic and Canary Islands hold their own, with equally beautiful – and often surprising (see the black shores of Tenerife) – beaches that draw in sunseekers year after year. But where can you be shore you're wiggling your toes in the best sands in the country? We’ve done the research. 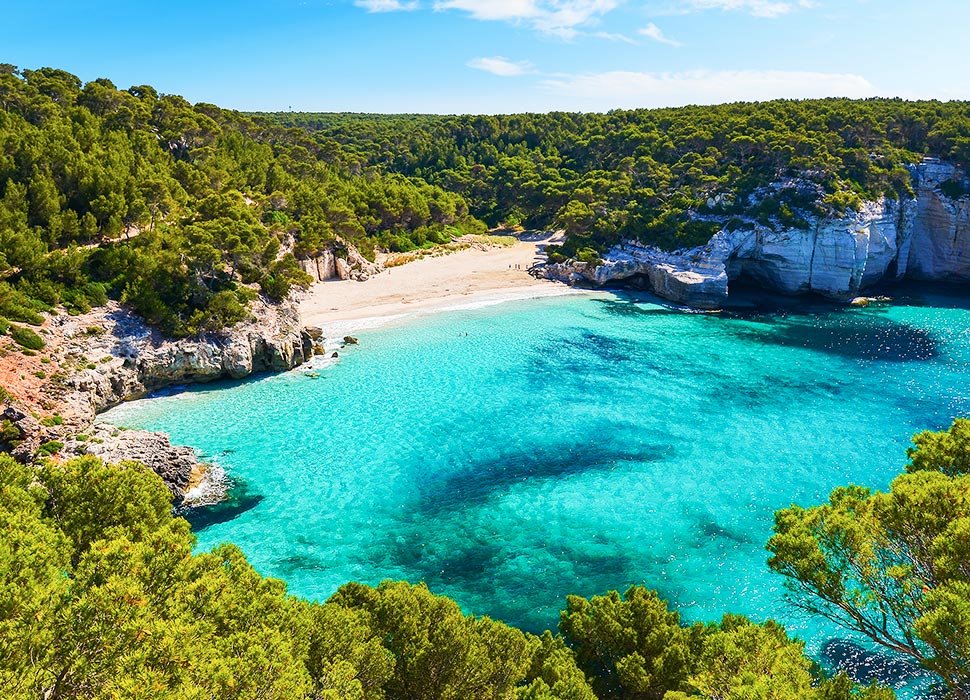 This small cove is big on looks / Image: Adobe Stock

Menorca’s southern coast is home to a cache of pretty coves that each feel like their own little secret. The best of the bunch is Cala Mitjaneta – a small, impossibly pristine inlet that’s only reachable via its slightly larger sister beach, Cala Mitjana. Walk a few kilometres down the footpath that runs along the Camí de Cavalls, and try not to gasp too loudly when it opens up to a crescent of soft, white sand shielded by low limestone cliffs, both doing their utmost to enhance the turquoise blues of the water.

Insider tip: On your journey from the car park to the first cala, look out for various relics of rural life: crumbling ruins of ancient lime ovens, stone huts that once housed cattle, and other timeworn curiosities. 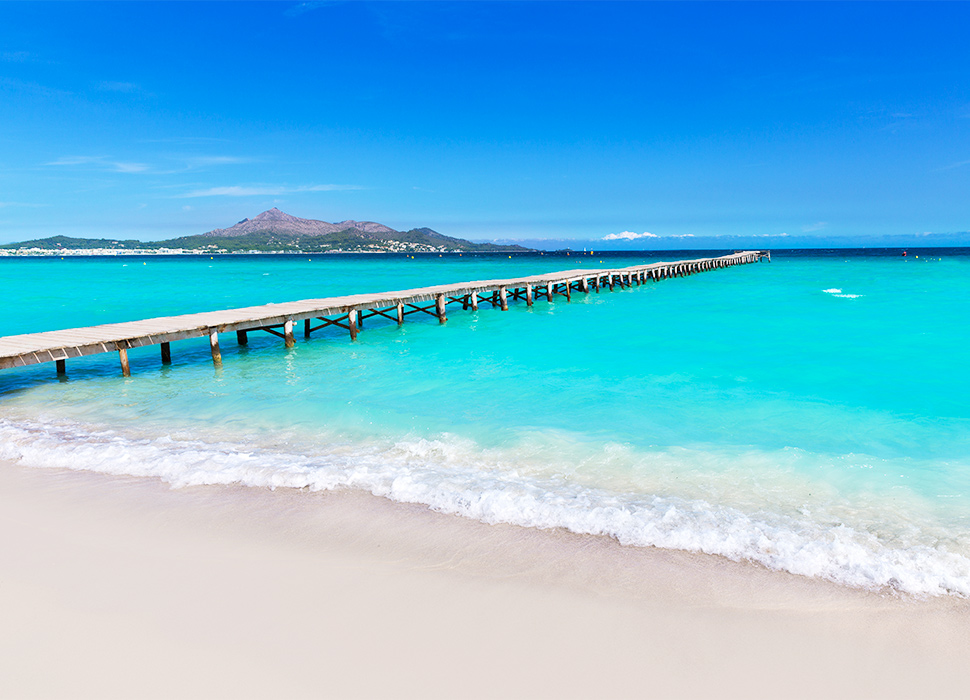 The largest sand beach in Majorca unfurls over 6km of dreamy, white-as-a-canvas shoreline lapped by calm azure waters – it’s the kind of heavenly stretch that immediately springs to mind with the words ‘beach holiday’. Despite its dream desert-island looks, plenty have cottoned on, and it’s one of the most-visited beaches on the island. Though this may mean you’ll need to fight for a place to lay your towel, you can also be sure Muro is chocka with amenities, including several kids’ play areas, some decent restaurants and all the toilets you could ever hope for.

Insider tip: For a super-authentic paella, take lunch at Restaurante Chivas, where giant bowls of rice come heaped with a bounty of just-fished seafood. 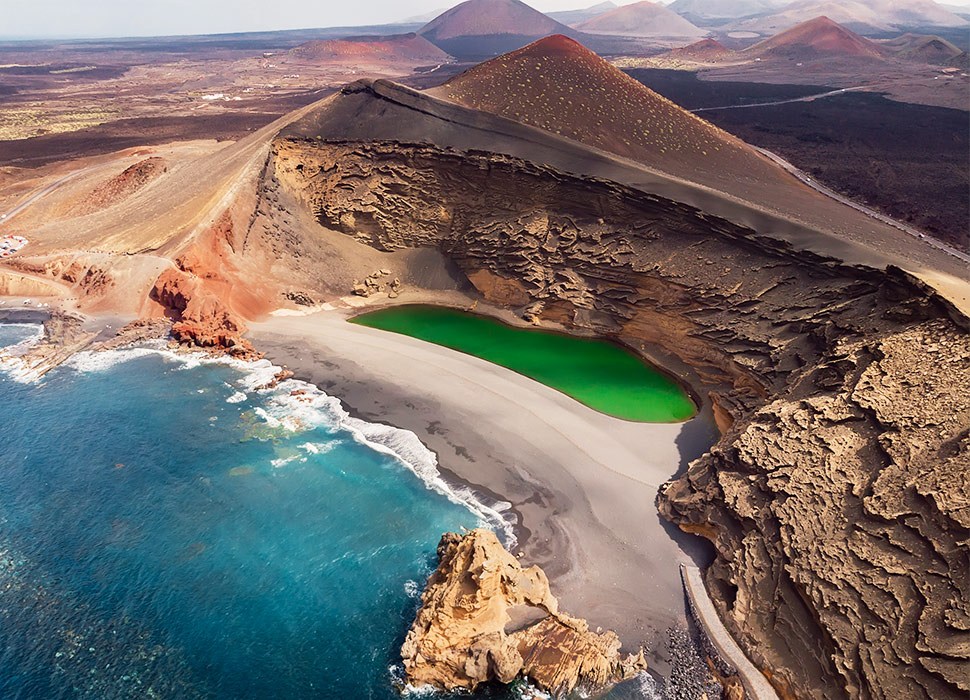 Don’t rock up to El Golfo in your bathers – this otherworldly place next to the typical Lanzarote town of the same name isn’t the kind of place you want to be basking, but it is a fascinating place to visit. This extinct volcanic crater is an eye catcher, surrounded by towering red-black outcrop that slopes into a dark, sandy beach. So far, so kind-of normal – until you spot the alien-green lagoon in the middle of the shore, a remnant of the eroded volcano. It’s all very Area 51, and a recommended pit stop for anyone who feels like their Canarian holiday needs an injection of eeriness.

Insider tip: Nearby, Los Hervideros and Las Salinas de Janubio are the largest working salt pans on the Canaries, and a worthy stop-off for their cool chequerboard landscapes. 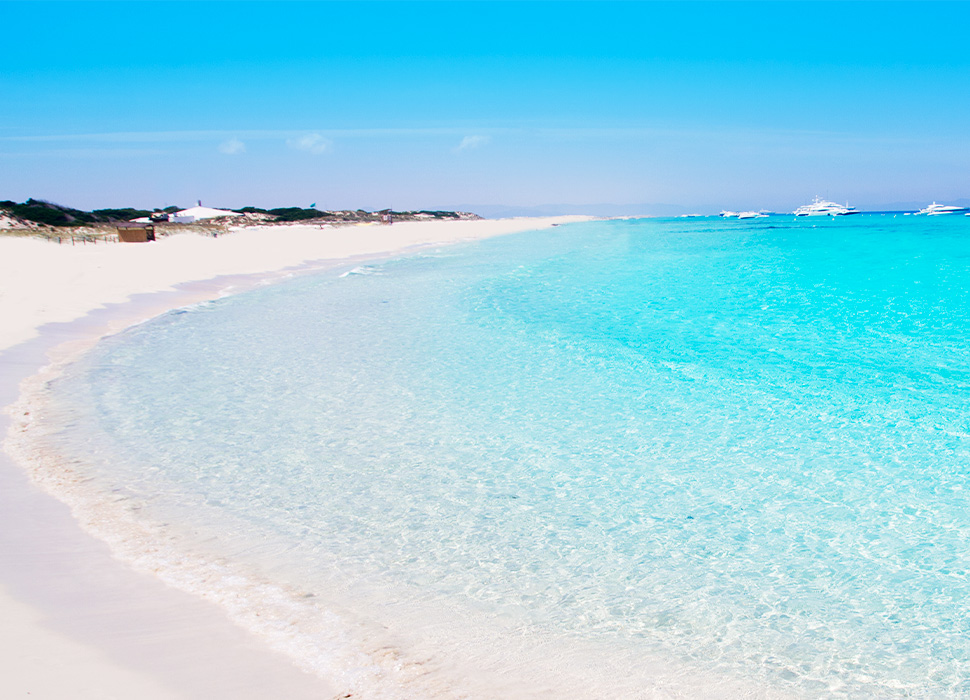 The tide is pink on this blush-hued beach / Image: Getty Images

The prettiest people on Formentera descend on this famous beach for one Instagram-centric reason: to snap a pic of its eye-popping millennial-pink-hued sand. The shore’s lovely shade is the result of a collaboration between the fine white grains and the coral-dust residue that’s washed up by the tide, resulting in a freaky-fun scientific accident that’s catnip for weekending influencers. The blush-coloured sand may be the star of the show, but the rest of the beach ain’t bad either, fringed as it is by shallow, turquoise waters that make for a delicious cool-off after you’ve worked up a sweat posing for the camera.

Insider tip: To really lean into the Insta-famous vibes, eat lunch at the glitzy Can Dani – just a 15-minute drive from the beach, it's a white-tableclothed restaurant beloved of the jetset. 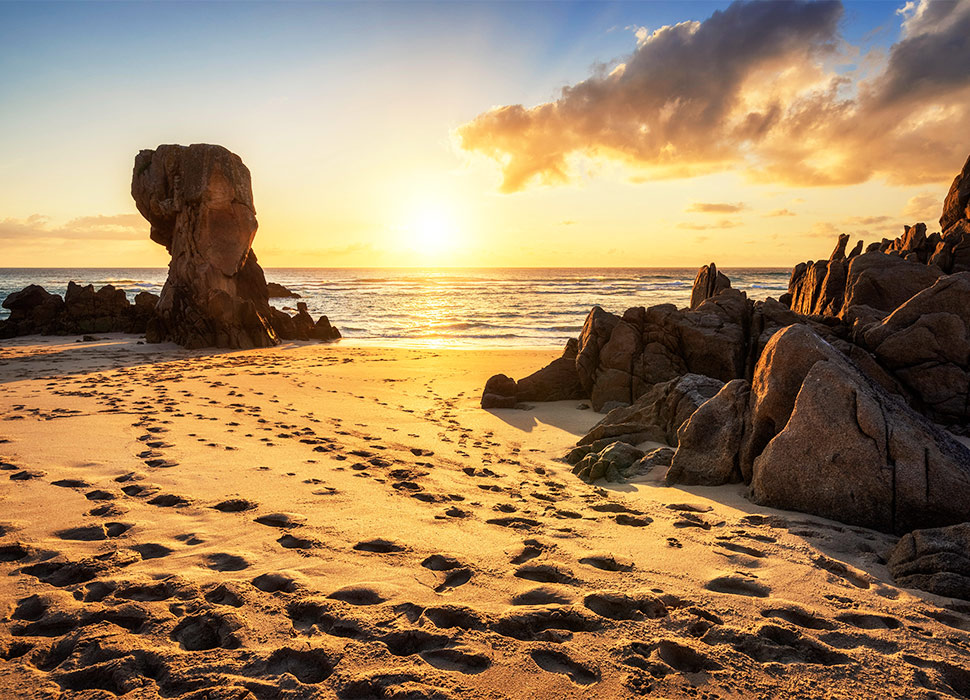 This secret cove is as pretty as it is hard to find / Image: Alamy

For a truly intrepid beach day – so off the beaten path it’s barely signposted – seek out this hard-to-find cove in the rugged backlands of Galicia. Wait for low tide and start your journey from Ferrol, taking the San Xurxo road until you spot a sign for Doniños beach. Follow the road and head straight through to the Punta Penencia, where you’ll find a narrow path that snakes down to the playa. Once you finally get there, you’ll be rewarded by one of the most beautiful (and least visited) shores on the continent, plus an endless expanse of clear-blue water to paddle around in.

Insider tip: Like we said – it’s really off the beaten path. Make sure you pack all the supplies you need for the day, and don’t expect to find a toilet anywhere nearby. 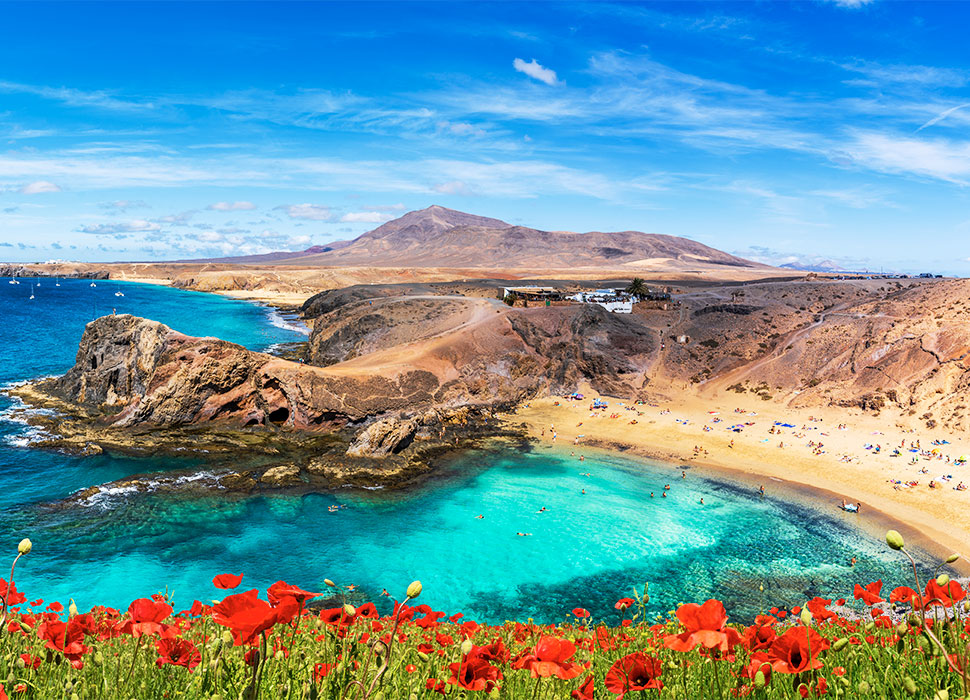 Papagayo consists of five beaches, each equally worth basking on / Image: Adobe Stock

OK, sure, it’s a bit of a cheat – Papagayo, the island’s most famous beachy area, actually consists of five golden shores separated by black-red volcanic rock. Take your pick: Mujeres, El Pozo, Caleta del Congrio, Puerto Muelas or the big guy, El Papagayo, each equally pretty and clear-watered, making them popular with snorkellers. And since Papagayo is at the very southern tip of Lanzarote, you’re pretty much guaranteed blistering, baking weather.

Insider tip: To reach the playas, you’ll need to take a scenic footpath that runs from the village of Los Colorados and snakes along the coast.

Book flights and holidays to Lanzarote 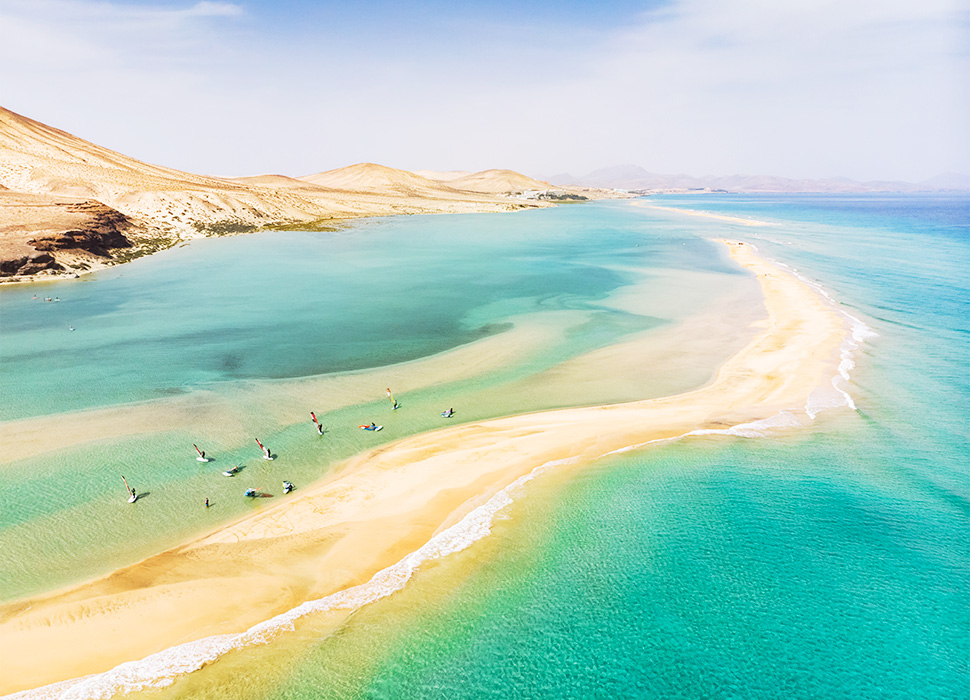 Is it the Maldives? The Bahamas? Nope, this pin-up beach is a bit closer to home – on the second-largest Canary island, Fuerteventura. Cited by many as one of the best beaches in Europe (and the world), Sotavento is 9km of honey-hued sand carved into gently curving swathes by the electric-blue lagoons that are left behind at low tide. The sea is bathwater warm, and the strong summer winds mean it’s an ideal spot for kitesurfing.

Insider tip: To best take it all in, clamber up to the Mirador de Sotavento (Sotavento viewpoint) on the FV-2, where you’ll find sweeping views of the beach and the endless Atlantic sea beyond. 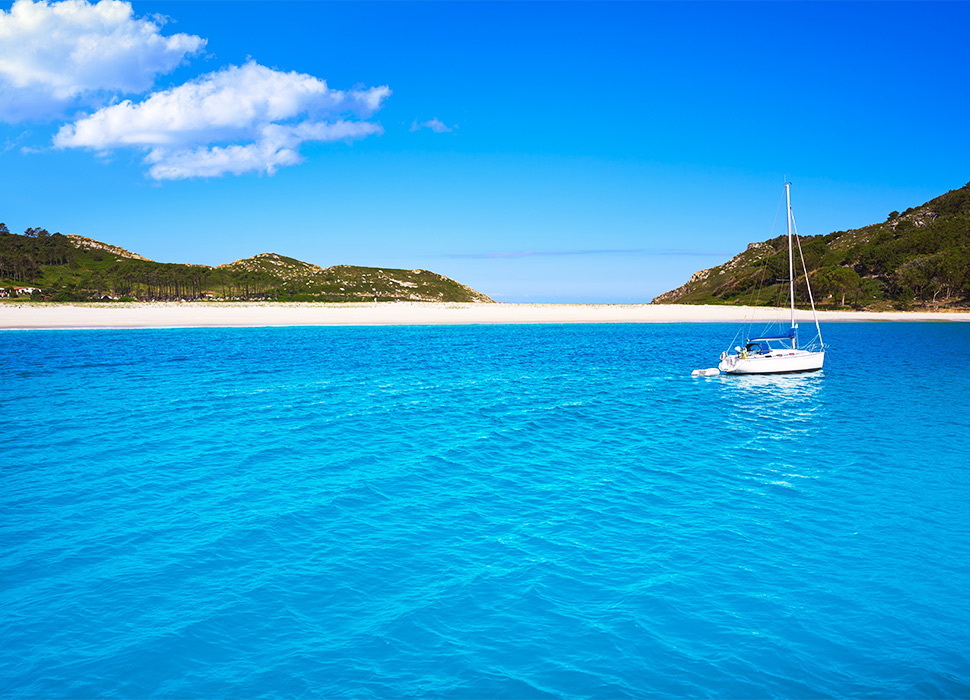 This national park is only visitable in summer via ferry / Image: Adobe Stock

You’ll find all the desert-island vibes you could ever want at this stunning beach that connects the Cíes Islands, a national park off the coast of Vigo. It's 700m of pillowy, bone-white sand, framed by the hypnotising Atlantic and backed by small dunes that shelter the shore from any harsh winds. It’s long been the favoured beach of Galicians, who are deposited en masse by regular ferries that run from Baiona. A 40-minute boat ride gets you to this Caribbean-esque paradise – and, if you can’t bear to leave when the sun begins to set, just pitch up in the pine tree-shaded campsite.

Insider tip: Cies is only open for visitors in summer, and, since traffic is limited to 2,000 people a day, you’ll need to apply for authorisation to visit. Make sure you do that on the Xunta de Galicia’s website before buying your ferry ticket. 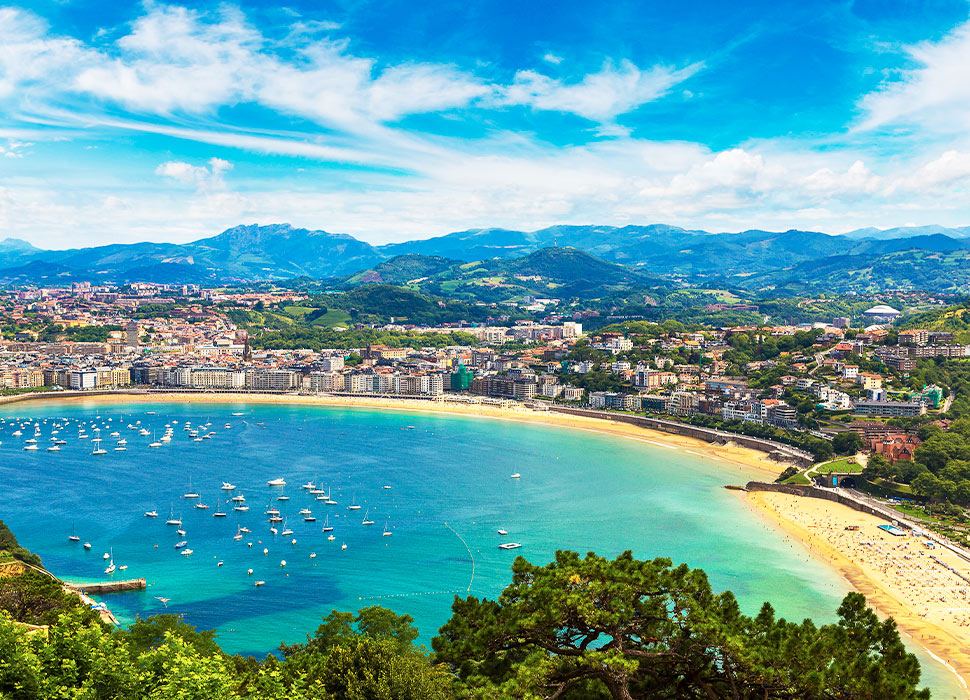 City beaches can be a bit hit and miss – but the western extension of the Playa de la Concha, San Sebastian’s seaboard, can rival any unspoilt, away-from-it-all shore. Like the Basque city itself, this playa is an A-list affair, long popular with small-time royals and dotted with blue-and-white-striped cabanas, that telltale symbol of seaside glitz. Monte Igueldo and Monte Urgull – the two hills that bookend the beach – up the glam factor, and are dotted with whitewashed, classically Basque houses that blink over the bay as the sun sets.

Insider tip: If you fancy yourself a bit of a water baby, challenge yourself by swimming out to the island of Santa Clara – where you won’t find very much beyond a small bay, a beach bar and a hill crowned with a distinctive white cottage-lighthouse.