How to become a fitness beast in Menorca

Wildfitness means getting back to nature by working out on beaches, in forests and even inside mountains. We went to Menorca to give it a go

I am about to wrestle a six-foot-four Dutchman on a beach in Menorca. A ring has been sketched in the sand around us. There’s a cheering crowd. Our coach shouts “go!” and I dig my bare feet in, trying to hold firm as my partner bulldozes towards me. It takes only seconds for him to knock me over. I crash onto the sand and my pride crumples with me.

This is Wildfitness, a transformative retreat that aims to ‘rewild’ your body and mind through a programme of primal movement, wholesome eating and getting pummelled by your fellow participants in a crude, shore-front Thunderdome. Our contemporary lifestyles have made humans sedentary, goes the theory, so most of us need a little help getting back to our natural state. The company was founded in 2001 by Tara Wood, who grew up exercising in the wilds of Kenya and has been running retreats across the world ever since. They've since opened an outpost on the beautiful Balearic island of Menorca, and I’ve signed up.

Not without a lot of thought, mind. Sure, I’ve had the urge to go off-grid, spending every overheated commute daydreaming of cool nights under star-filled skies. Now, a number of travel companies offer ways to scratch this urban itch. Wilderness Ireland would have me shearing sheep and paddleboarding (not at the same time), while with Wild Frontiers I could hike the Bulgarian mountains to my heart’s content. But I’d like my adventure to have tangible effects long after its end. I want a journey that Bear Grylls would be proud of, and to gain skills that I can show off back home. 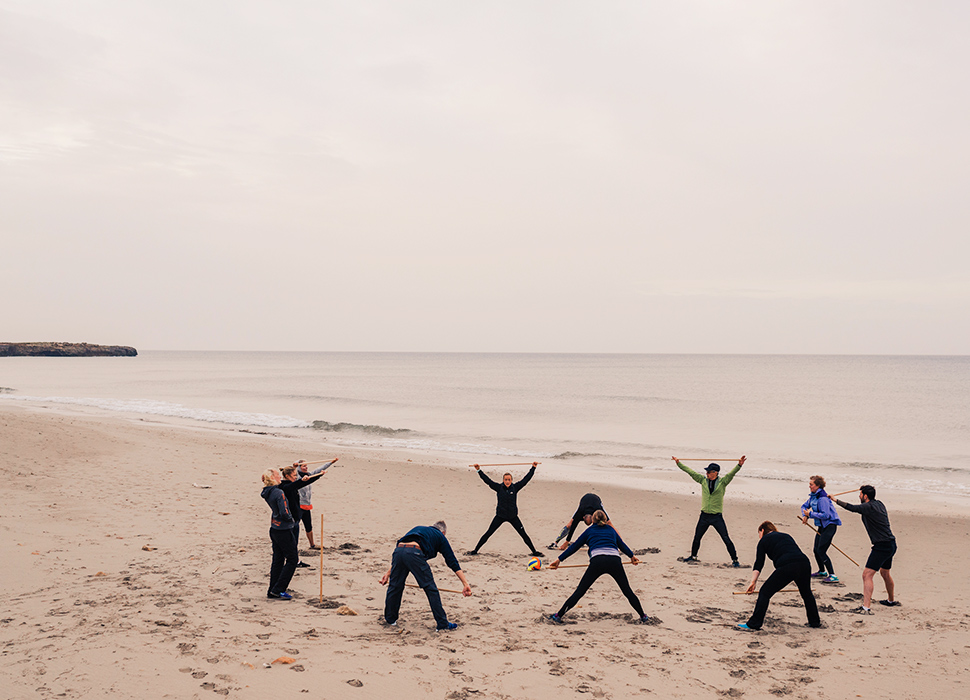 Which is why I’ve chosen Wildfitness, despite the fact I’ve never been that into… well, fitness. When, back in 2017, scientists released a study that said people can actually be allergic to exercise I finally felt vindicated in my decision to avoid the gym. But, here there are benefits beyond just sweating off the summer’s gelato. For starters, our base for the week is Binigaus Nou, a gorgeous chalk-white farmhouse done out in Danish décor on the island’s southern coast.

I’m thankful to discover things start out easy, with an assessment of posture and mobility led by coaches Natalie (‘Nala’) and Hannah, who move with simultaneous bounce and grace – a bit like a cross between grasshoppers and gazelles. We start with a basic caveman squat (cue excessive clicking of joints) before diving into a class on animal movement. That includes crawling like a cat, jumping like a frog and crab walking like a, er, crab. Cue sniggers as our wannabe wolfpack scuttles from side to side like particularly crusty crustaceans.

Participants come from a broad spectrum of office jobs – including property, design and accountancy – and we all have our own reasons for being here, from rebooting unhealthy lifestyles to triathlon training. On our first night, we sit down to a tasty dinner of stuffed courgettes, mussels and artichokes (all our food will be prepared by a Menorcan chef called Jaume, who feeds us local dishes that are light on carbohydrates and absent of caffeine and alcohol). “This is a team thing, really,” one of the women remarks, and she’s right. Throughout the course of the week we’ll face individual highs and lows, but it will all be in the spirit of mutual support, rather than competition. 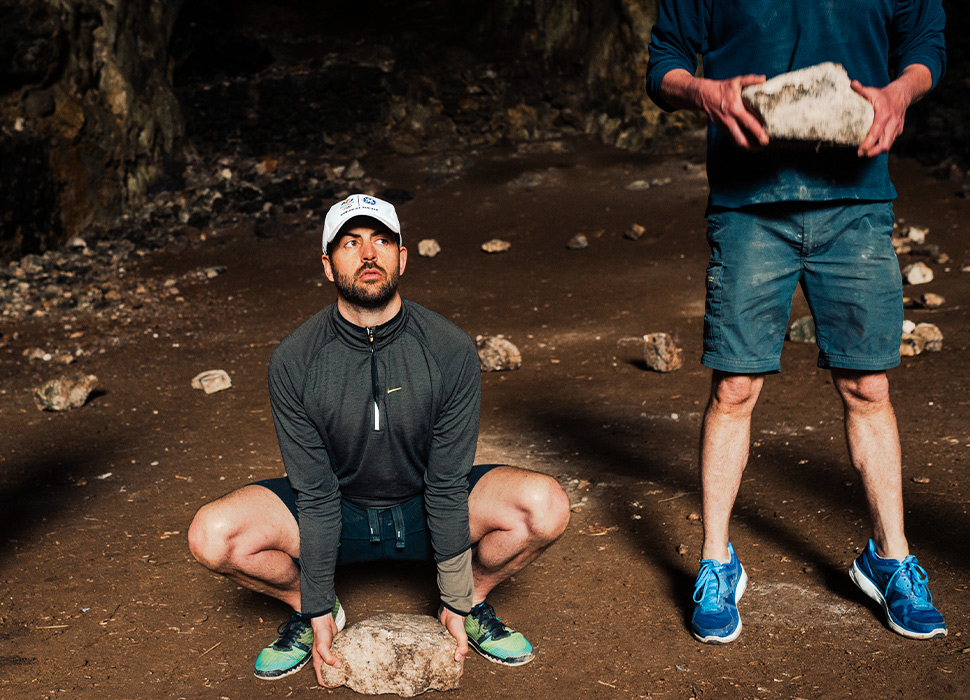 Yes that's as heavy as it looks / Image: Alex Atack

Things do, of course, get harder. We are only told the schedule for the following day the night before, in an effort to make sure we give our all to each session rather than preserving ourselves for what’s to come. If I’d known while I was boxing the morning away on day two that I’d be spending the afternoon deadlifting rocks in a musty mountainside cave, then perhaps I would have taken things easier. Difficult moments are lightened, however, by the unfailing optimism of Nala and Hannah, who have a knack for picking the right times to encourage us. A well-timed cry of, “You can do it Kate!” gets me through a hellish session of ‘lactic lift-off’ interval runs.

At other times, the magical setting is enough to inspire. On day three we set off at 6am for an 18km hike along the Camí de Cavalls coastal trail. Walking the first couple of kilometres in darkness means that I wake up as the world does – to the calls of wood pigeons and the scent of dewy pine trees – rather than the shriek of an iPhone. The rising sun lights up spearmint meadows and paths starred with marguerite daisies as we make our way to a picnic breakfast of Spanish omelette. The final stretch snakes along the coastline and we cool off at each cove we encounter with a bracing dip in the sea. That night I experience an ecstatic kind of exhaustion. 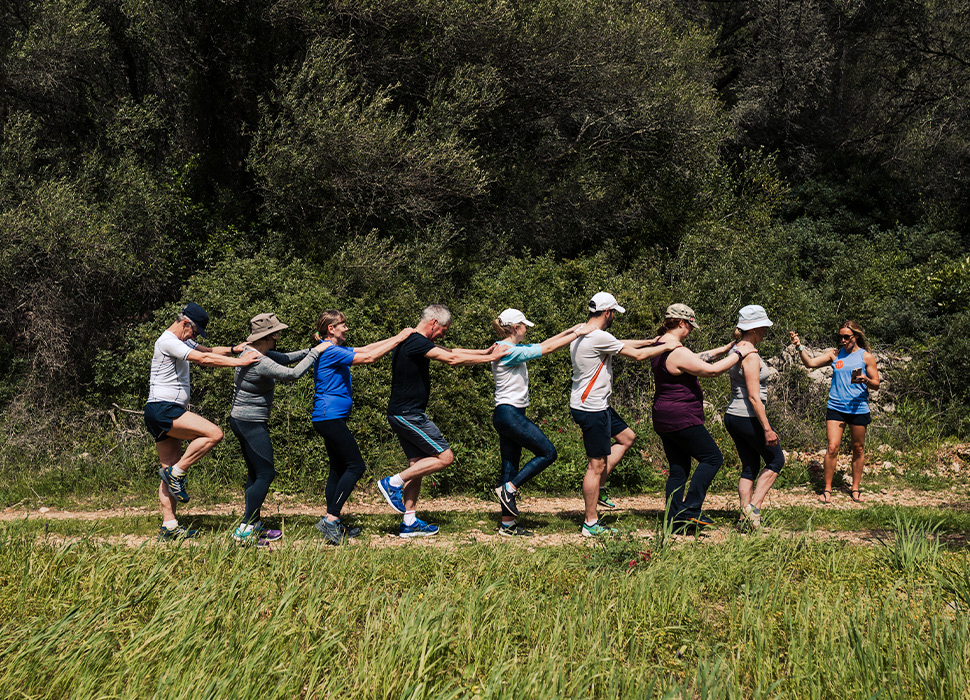 As much as Wildfitness is about movement, it is also about stillness; about finding ways to quieten the mind, of retraining the eyes to focus on horizons and distance rather than screens and signs. There’s lots of free time – for reading, sleeping or exploring (on one afternoon I sneak off to the nearby city of Ciutadella).

Out of all the exercises we do that week it’s the meditation – the act of tethering the mind to the breath for a while – that I find most challenging. Every time I bring my attention to my breath my thoughts tear away like a dog off the lead: What’s for breakfast tomorrow? How long would I survive in the wilderness? Has that email come through? Hannah tells me I’m overstimulated, that modern life has left me in a constant state of ‘fight or flight’. An important part of wild living is about learning to uncoil yourself from tightly wound states of stress. 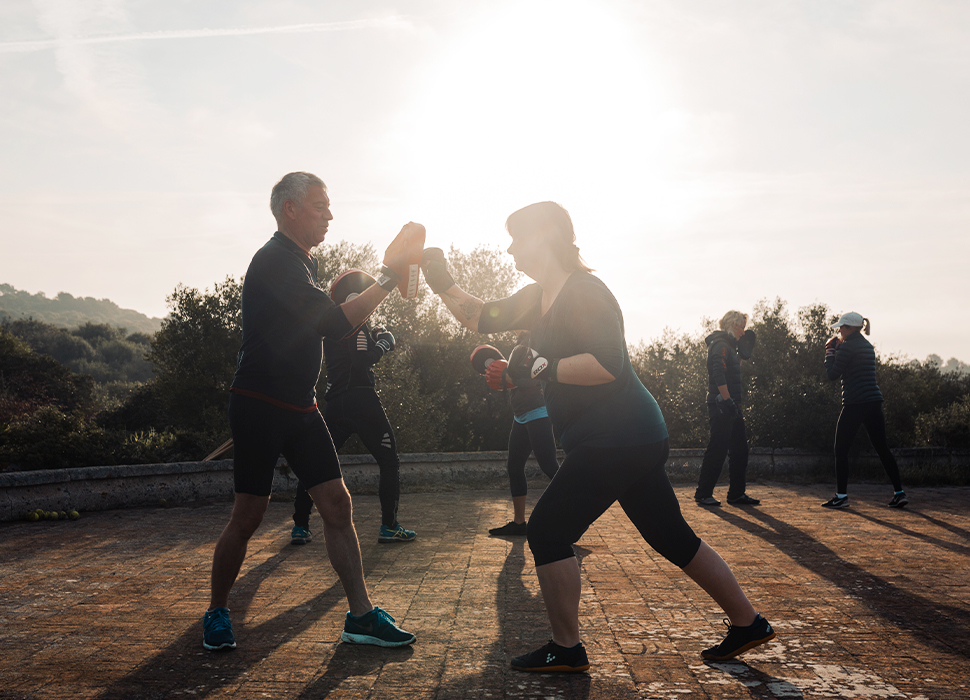 Working out that doesn't feel like working out / Image: Alex Atack

Gradually, we begin to notice changes. By the end of the week I’m rising earlier than my alarm, fuelled by natural foods and early nights. And though losing weight is not a goal (unlike other quick-fix camps) some of us have started to slim. Then there’s the camaraderie, that I might have cringed at before, but which after a few days of wild living feels natural. One of our group (sorry, tribe) says, “I love these games, because you’re running, but you don’t realise it.”

And that’s the key, really – for someone like me, at least. To find a way of ‘working out’ that doesn’t feel like a chore to tick off. When I get home to the city I find I’m no more keen to sweat it out in the gym, but I begin visiting the lido for early morning swims. Plunging into the icy water becomes a kind of balm. And while it’s not the same as crashing into the wild waves of the sea, I can still hear birds, smell cut grass and feel a breeze on my back.  An open-air pool might be as close as I’ll get to wild living in the city, but at least it’s one small step – maybe even a crab walk – in the right direction.

The best restaurants in Menorca

The best hotels in Menorca