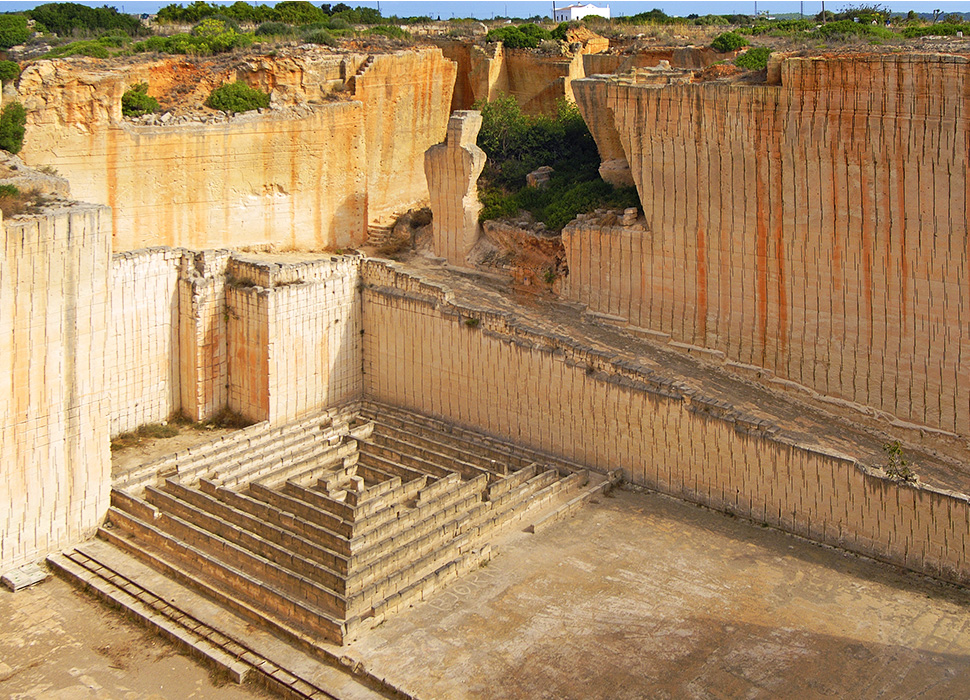 The reworked calcarenite quarry of Lithica / Image: © Menorca Tourist Board

Lithica of S’Hostal is the centuries-old quarry that produced the pretty calcarenite stone seen in much of the island’s traditional architecture. Sound kinda drab? Not one bit. Since its closure in 1994, the cavernous space has been rejigged into an ambitious mixture of public gardens, orchards, a happening arts and culture venue which hosts concerts in the summer months and, most beguiling of all, a maze. Like the hardworking masons and miners who first carved out this spectacular spot, we think you’ll really dig it here.

2. Sink a bottle at a bodega 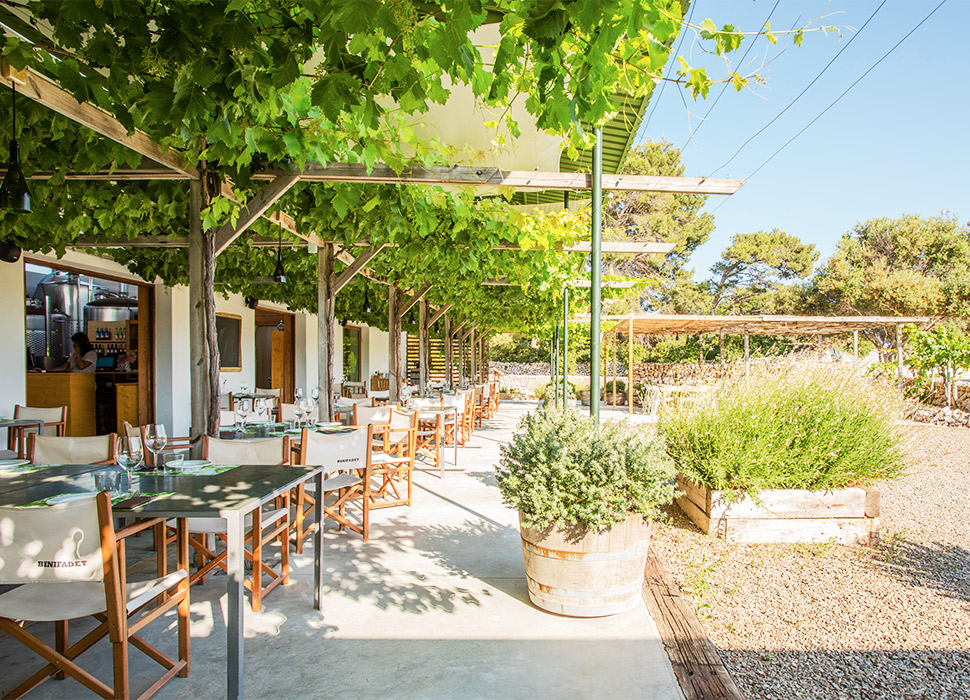 Menorcan folk love spending a chatty evening hanging out at a ‘bodega’ – a wine cellar, or just a wine shop. For the upscale experience swing by Binifadet (at Cami De Ses Barraques) in the southeast of the island, where you’ll nibble gourmet small plates and sup sparkling homegrown whites. Further north the team at Menorquinas (at 8A Carrer de Tramuntana), led by historically minded wine supremo Crispín Mariano, have been reviving forgotten ancient methods to produce banging bottles. It’s enough to make your head spin.

3. Have a peak experience at El Toro 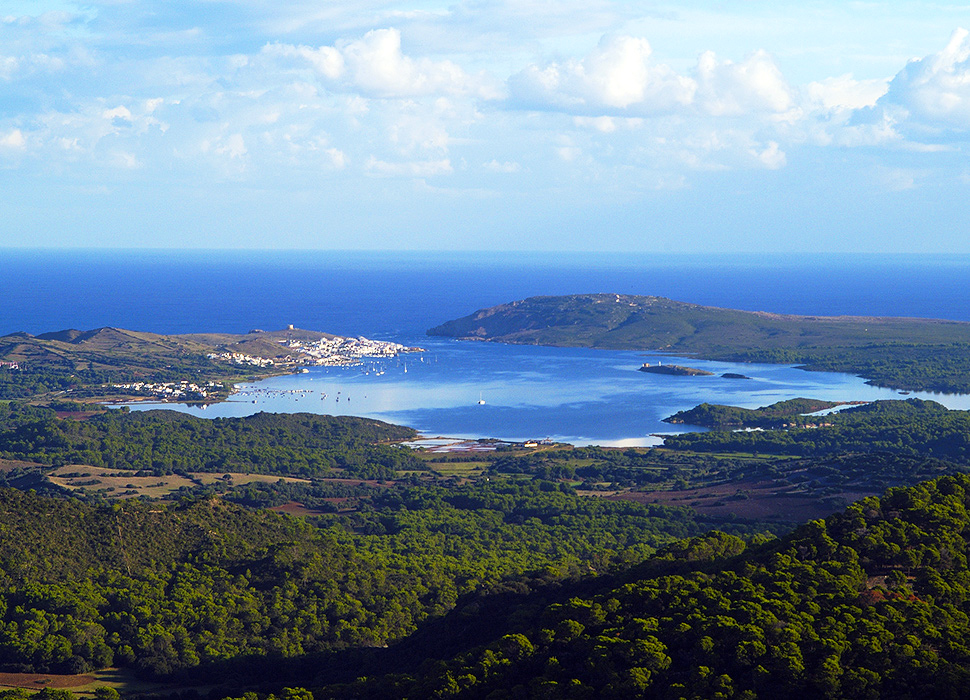 A panorama from El Toro / Image: © Menorca Tourist Board

Legend has it that back in the 13th century a band of local friars were led to the summit of Menorca’s loftiest peak by a supernatural bull – ‘el toro’ – whereupon they found a holy statue of the Virgin Mary. Today, the Virgin of El Toro is the island’s patron saint, and well worth the 354m hike to pay your humble respects, before grabbing a coffee and a bite at the pilgrim-friendly café. From up here you can see the entire coastline, and on a clear day all the way to Majorca (no bull). 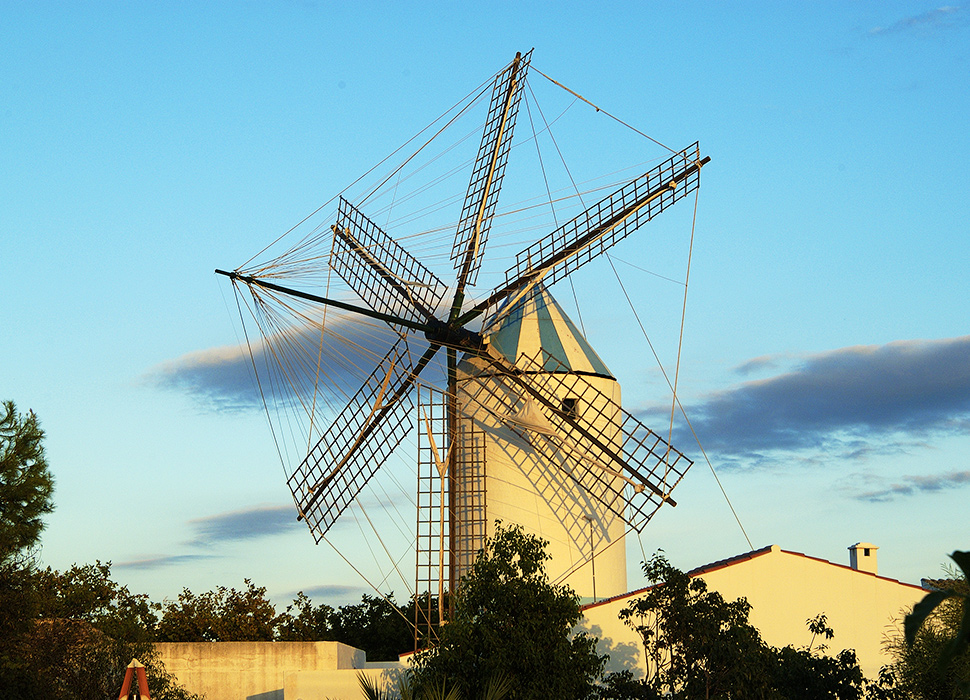 The French, during their short-lived 18th-century occupation of Menorca, took it upon themselves to build a trio of windmills in the dinky village of Sant Lluís. Only one now remains, but it’s an absolute beauty. Molí de Dalt, a fetching white structure with a jaunty blue-and-white conical roof, makes for a splendid photo op, and that’s before you realise you can actually go inside and climb to the top. The ground floor hosts a friendly ethnological museum full of tools and insights about the windmill’s former job – the daily grind, if you will.

5. Feel the blues at Cala Turqueta 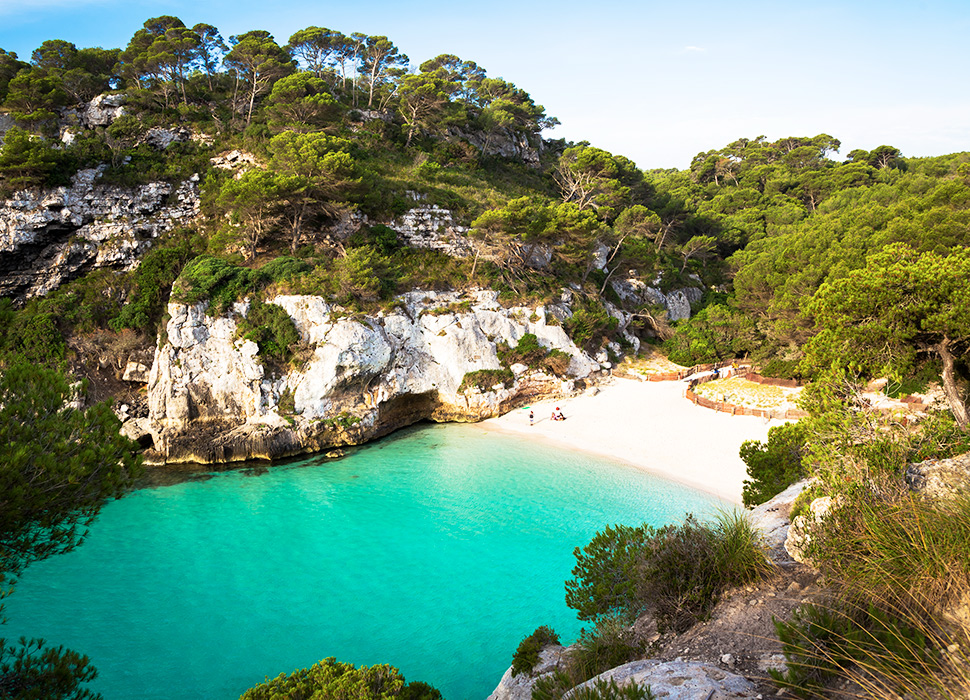 Menorca isn’t short of luscious beaches, but one of the absolute loveliest is Cala Turqueta on the southwest coast. Named after the beguiling turquoise of its warm shallow waters, here the sand is as white and the shady pine trees as verdant as you’ll find in any brochure. The perfect scenery is broken up by handsome rock formations – look out for locals flinging themselves boldly off the edges into the sea – and the snorkelling is also famously good. It’s a slice of blue heaven.

6. Get back to nature at S'Albufera des Grau 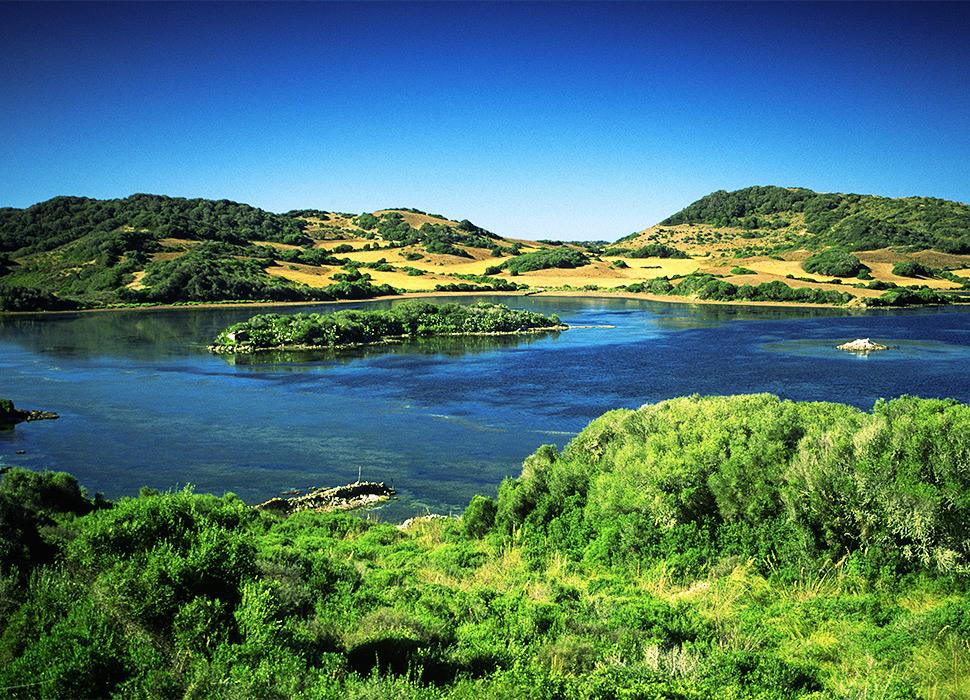 Around 20 square miles of coastal lagoon in the northeast of Menorca has been designated the S'Albufera des Grau Nature Reserve, a lush plot of marshland, sand dunes, teeming sea inlets and thick forest. Birds love it – around 90 species have been seen here, including coots, cormorants, herons and spectacular fish eagles. Visitors should keep an eye open for both rare Balearic lizards – that you simply won’t see anywhere else on Earth – and even wild tortoises. Pop by the helpful visitor centre for a solid introduction to local island life.

7. Do your homework at Museu de Menorca 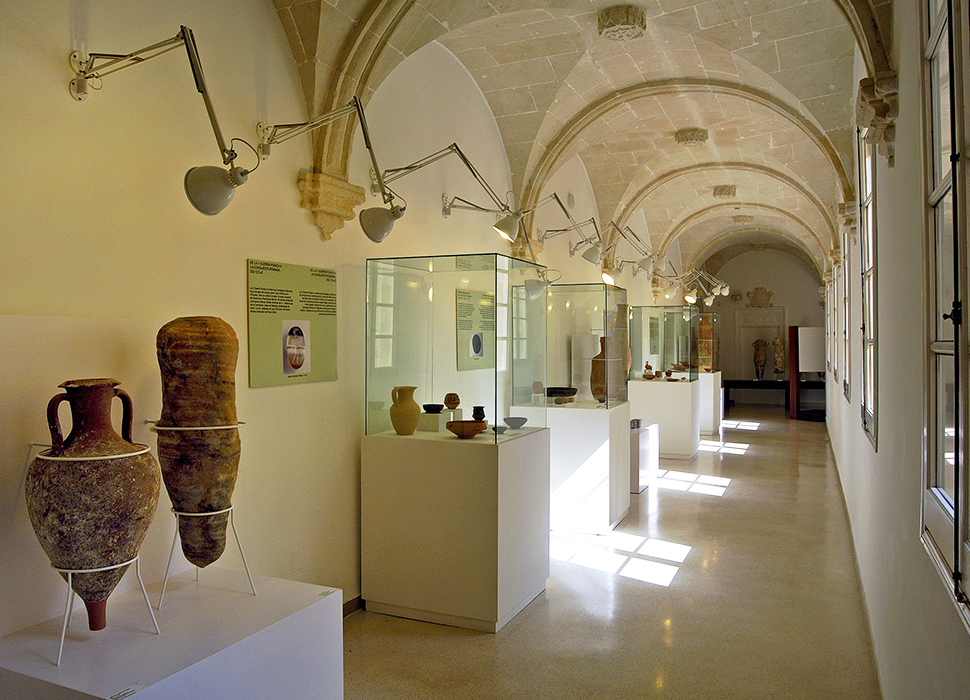 Before getting stuck into all that carefree fun and sunshine, it’s only good manners to familiarise yourself with the fascinating story of this island. The Museu de Menorca, situated in a stately renovated convent in Maó, is an ideal one-stop. Marvel at skeletons from long-extinct fauna, then skip through the various Bronze Age, Roman, Byzantine and Islamic eras, with eye-opening artefacts from the British, French and Spanish occupations, with lots of cool art and lovely objects to pore over.

8. Feel all white at Binibeca Vell 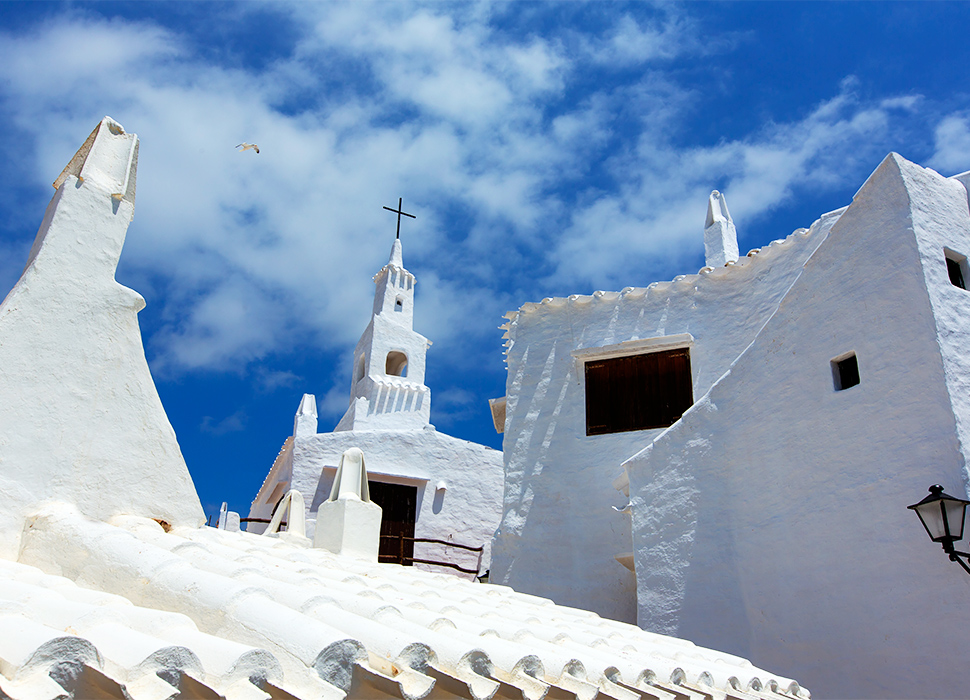 In the early 1970s, celebrated Catalan architect Antoni Sintes Mercadal was commissioned to create a stylised take on the traditional Menorcan fishing village. The result is Binibeca Vell, an extraordinarily photogenic cluster of alabaster-white, two-storey dwellings and a pretty church. Wander through labyrinthine alleyways and coo appreciatively at the Moorish-style arches and quaint cobbles. Then stake out a spot on one of the gleaming restaurant terraces, from where you can contemplate this dazzling one-of-a-kind seaside gem over – what else? – a fat glass of white.

9. Mix with the movers and shakers in Ciutadella 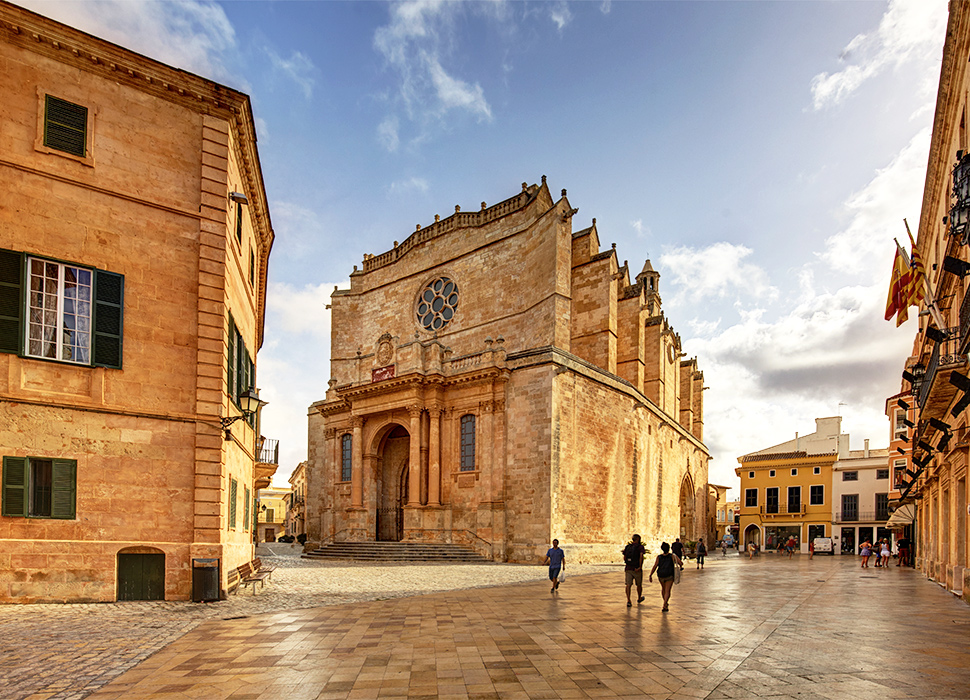 This pocket-sized port town was actually the Menorcan capital through the Roman and Moorish periods, but after several bruising encounters with the Ottomans the seat of power was moved to Maó in 1722. Happily, Ciutadella has remained more or less as it was then – a feast of grand Renaissance and elegant gothic architecture. Plaça d'es Born, the main square, and its priapic obelisk are great for photo ops, whereas the Plaça Nova is a bijou square studded with upmarket cafés, where local well-heeled types hang out.

Menorca is famous for its 'caldereta de langosta', or lobster stew. The island’s distinctive spiny sub-species of the critter goes lovely in a simple hot pot of stock, bread or biscuits, tomato, onion, garlic, parsley and olive oil with a pinch of salt. The town of Fornells is the spiritual home of the dish, and where visiting royalty are said to stop by for a taste. Book in at Cranc Pelut (at 98 Gumersindo Riera) or El Pescador (at 5 Carrer del Rosari) for your own pinch-perfect plateful.