The grace of a padel pro / Image: Emli Bendixen

Padel is the fastest-growing racquet sport in Europe – and its spiritual home is Rafael Nadal’s academy in Majorca. We visited to give it a swing

The grace of a padel pro / Image: Emli Bendixen

Standing in a Majorcan no-man’s land surrounded by baking grass and empty sky, I’m supposed to kill and resuscitate the enemy. Once I’ve worked out what it is. “Kill him,” the man instructing me shouts sternly. Kill who, sorry? “It,” he barks. Ah, the ball? “Yes, the ball!” 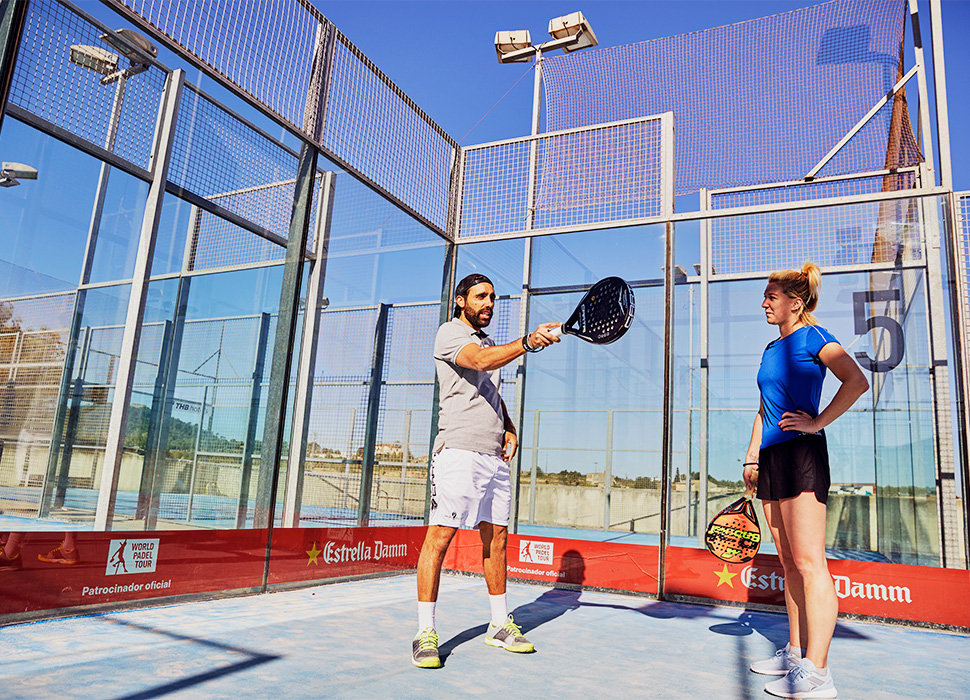 Stay out of no man's land / Image: Emli Bendixen

A minute ago, the padel ball I’d been thwacking against the glass walls of the court was ‘dying’ and I’d had to kiss it back to life by slamming it across to the other side. Then, “Cut his legs off!” comes the command. Meanwhile, a bird that’s flown bang into one side of the glass wall lies prostrate and unmoving on the floor directly outside, a reminder that I should try not to do the same. “The wall is our friend,” coach José Landeta tells me, in therapist’s tones, when he sees my face crinkled in anticipation of a broken nose. It certainly wasn’t the bird’s friend. “And remember – if you’re not in one of two positions, you’re in no-man’s land,” Landeta says darkly. That’s 60% of the court and I can feel it.

Padel – which was officially recognised as a sport in the UK in May, after British Padel was absorbed by the Lawn Tennis Association – is often described as a mixture of tennis and squash, but looks more like an elite version of something you’d play on the beach, if that game had the positional thoughtfulness of chess. 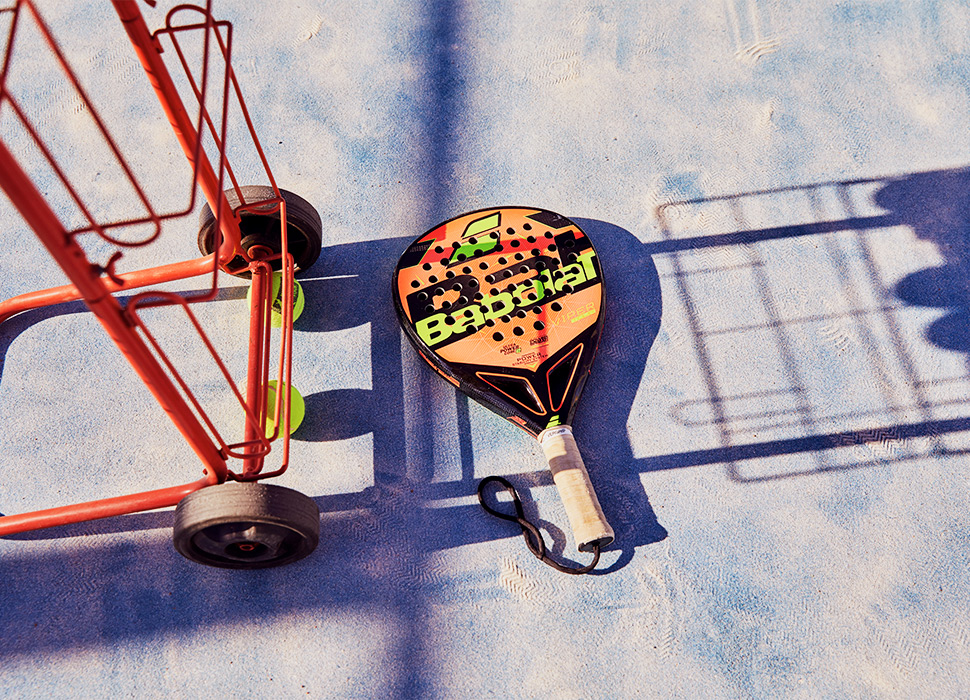 Already massive in Spain, Portugal and South America, it’s growing with contagious popularity in the UK, where there were 55 courts at the last count and another half-dozen planned each month. Liverpool and Manchester City football clubs both have them in their training grounds and Joe Lewis, owner of Tottenham Hotspur, is so obsessed that it’s believed he moved his court between the Hamptons and the Bahamas, depending on where he was living for the season. Then, when that got tedious, he supposedly built one on his £113m superyacht so it could travel with him.

To learn more about the game, I’ve flown to Rafael Nadal’s Sports Centre on the Balearic island of Majorca, to train alongside the lean teens who are the future of tennis and live here among hotel guests having a sporty holiday in the sunshine. A 45-minute car ride from Palma Airport delivers you to Manacor, where Nadal was born and still has a house. It’s the first holiday I’ve ever had in a sports centre – but anything Rafa can do I can gamely attempt for at least an afternoon.

Landeta was a padel coach in London for six years before setting up his company, Padel Escapes, and works with centres like Nadal’s to plan and organise trips like mine all over Europe. He still gets a lot of enquiries about paddle-boarding (and the photographer has asked if she needs to bring an underwater lens), but slowly people are catching on. In a few more years, it could well be an Olympic sport.

Comfortingly, since neither squash or tennis has provided a podium moment for me, Landeta says you don’t need a background in either to enjoy padel. I took a squash module in school, but spent it sitting on the floor of the court talking about boys; and last year I had a few tennis lessons, but would still have a Serena Williams-style meltdown if I had to play anyone who was good. “If tennis is Formula 1 racing, then padel is go-karting,” Landeta says, trying to persuade me it’s more relaxed and more fun. 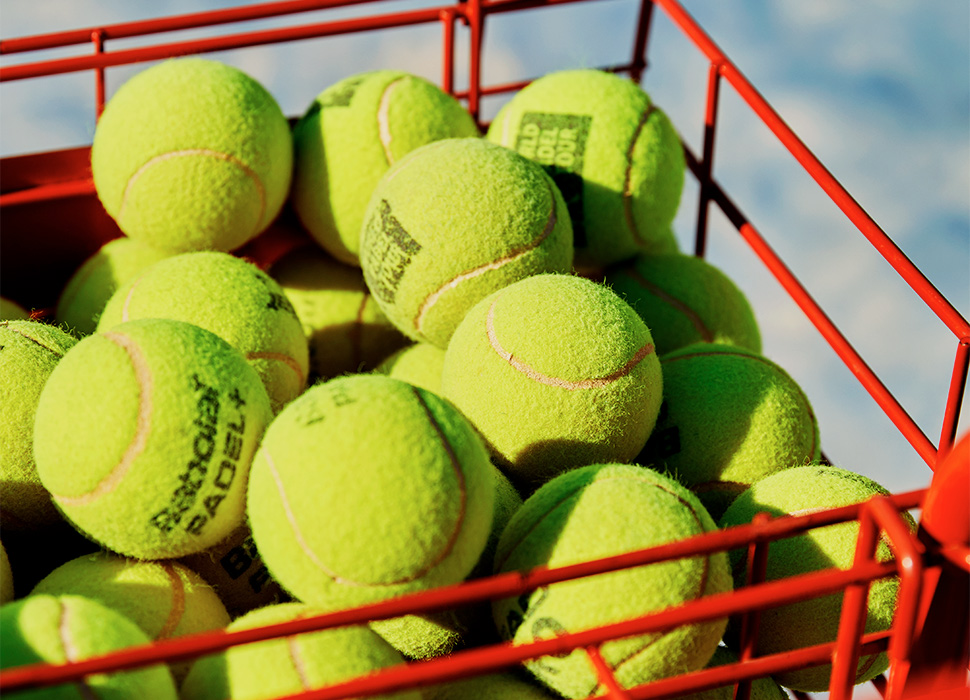 Padel racquets, it turns out, are much easier to wield than their ganglier cousins, too. Looking more like fat ping-pong bats, they’re made from a combination of foam and carbon fibre, and flecked with holes like Swiss cheese. They’re more similar in how they’re used: for forehand and backhand strokes, volleys and an attacking high slice called ‘the rattlesnake’. Scoring (15, 30, 40, game) is also the same as tennis, but serves are underarm and it’s only played in doubles on Astroturf courts that are about a third the size of a tennis court.

“Singles is impossible,” Landeta says, partly because the ball must bounce first on the court before hitting a wall (or it’s out) and if it bounces more than once, you’ve lost the point. When it rebounds off the walls like a pinball, that’s a lot of ground to cover and you can find yourself pirouetting like a crab against the glass. “If it’s dying at the wall, you can ‘boast’ it back over the net by hitting it hard,” Landeta tells me, “but don’t hit yourself in the face.” The lifeless bird comes to mind again. I don’t want to be one. “And stay out of no-man’s land,” he adds, curtly. 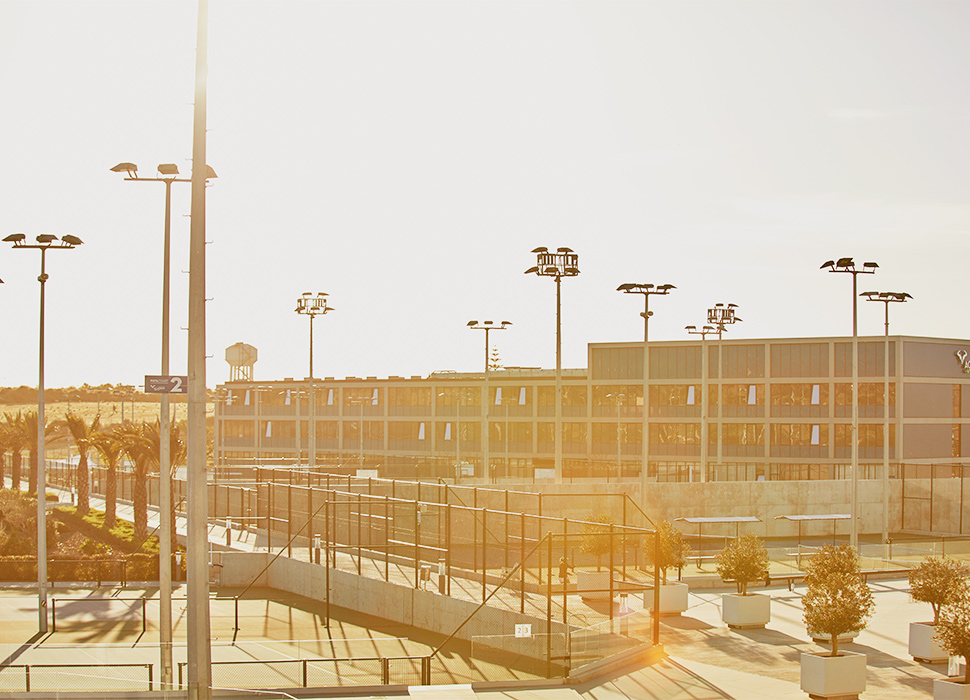 It's hot on the courts of Rafael Nadal's Sports Centre / Image: Emli Bendixen

Landeta’s trips include a few hours of padel training in the morning, lunch and a break at the beach, then a few more padel hours in the evening when it’s cooler again. Learning in Manacor with him is super-fun and it’s certainly inspiring (even if the menu Rafa Nadal’s nutritionist has designed for dinner is not). It’s also a family affair. One of Rafa’s uncles, Toni (his former coach), is the director; another, Miguel Ángel Nadal (a former professional footballer for Barcelona and Spain), is walking off the tennis courts when we arrive. His sister is in the gym one evening and Rafa himself comes several times a week when he’s here, often training on centre court. He is to Majorca what Jesus is to Nazareth, and for players like Bianca Andreescu, the 18-year-old Canadian who won the Indian Wells Masters this year and is warming up near the padel courts when I visit, training in the same arena as Nadal must spur on a win.

Part of the pull for anyone unprofessional, though, is the after-court beer, Landeta admits, as we order Estrella at the bar overlooking centre court and pray Rafa himself comes swaggering out of the tunnel. “Was tennis your first love?” I ask. “No, just Nadal,” he says, and you can imagine a lot of people here think the same. The noise of the ovation, if he did appear, would probably shatter the glass of the padel courts.