This boat company is turning the sea green / Image: Ibiza By Air

Meet the people turning the blue seas around Ibiza green

Sailing is a huge part of Balearic life, but can it ever be sustainable? Local company La Bella Verde thinks so. We hopped aboard one of its solar-powered catamarans to find out more

This boat company is turning the sea green / Image: Ibiza By Air

One of the most pleasing perks of island living has to be jumping on a boat and whizzing around the place, finding cool little coves to dive into and drying off again in the salty sea air on a deserted beach.

On Ibiza, the neighbouring island of Formentera and the surrounding archipelago, boating has long been big business. From the 19th century, when the many ports and marinas were teeming with fishermen, tradesmen and sailors lured by the stunning coastline and islands bursting with fresh produce, through to 2019, when flashy nautical tourists show off their superyachts at one of the many annual galas, life on the Mediterranean sea has never been better – or busier. 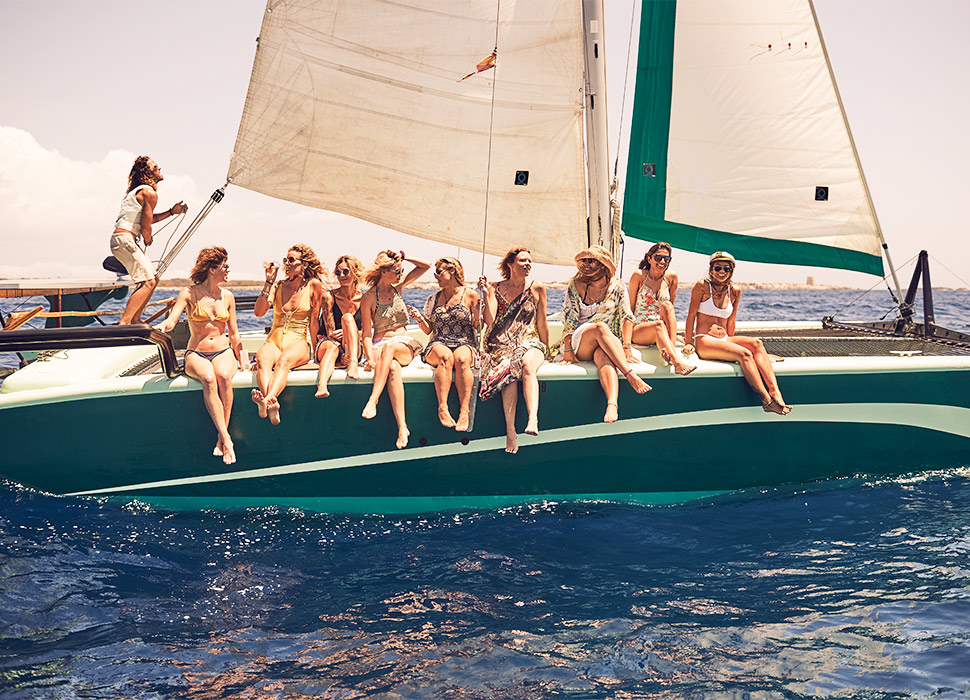 Oh we do like to be beside the sea...

There are almost 300 boating companies in the Balearics ready to serve the four million tourists who visit the islands each year and their sailing expeditions pull in an estimated €562 million annually. This means that, during the summer, ships of all sizes line the horizon, almost matching the number of people sunning themselves and admiring from the shore.

While the trend for boating is going at great knots, at the same time, the Balearics are pushing forward with some of the most important green initiatives in Europe. This includes plans to install LED streetlighting by 2025, make all car-hire fleets electric by 2035 and even phase out greenhouse gas emissions altogether by 2050. It's a bold green manifesto for the islands, but what about the blue bits around them? Can Mediterranean boating also be made sustainable? 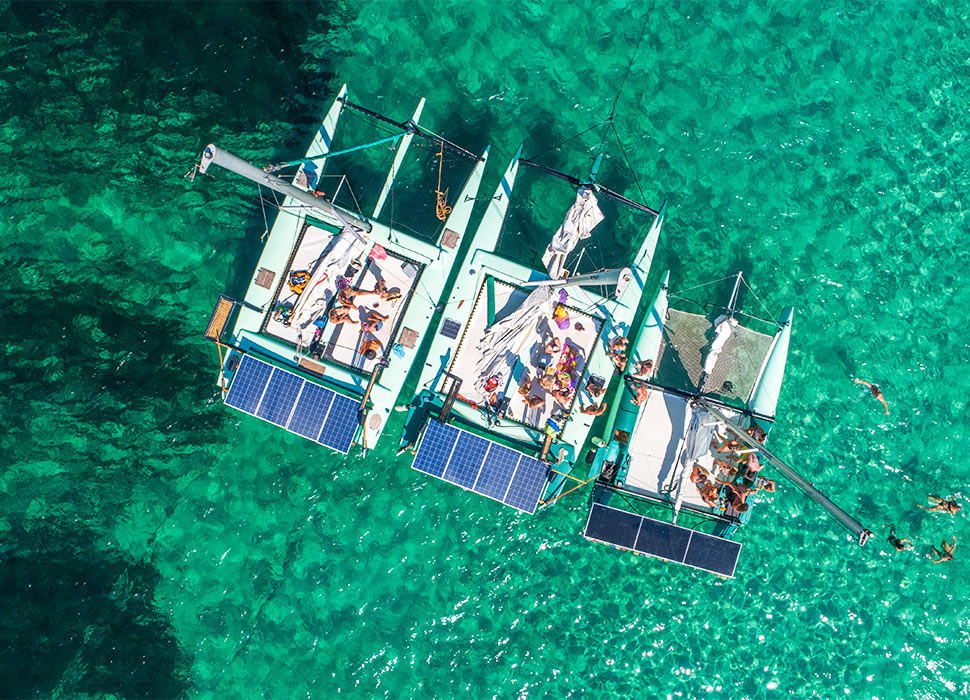 Sun beaming down on the solar panels / Image: Ibiza By Air

La Bella Verde thinks so. In fact, over the past seven years, the pioneering Ibiza-based boat company has slowly been cornering the market on green boating, with vessels that run on the sun as well as the wind. Founded by a team of three sailors, Alastair (Ali), Charlie and Maarten, their idea came about by unhappy accident, when the guys unintentionally spilled engine fuel into the sea and were horrified by the shiny mess the diesel made. “We were contaminating the water,” says Ali. “As sailors, that felt terrible. We all had the exact same thought in that moment: ‘We should make electric boats!’”

Ali and Charlie are my shipmates for the day, and are doing the hard work while I dangle my legs over the edge of one of their solar-powered catamarans. What started with a single boat quickly became a fleet-sized venture, with orders for their unique eco-craft pouring in. They're piloting this particular lightweight boat effortlessly across the Mediterranean, towards the tiny island of Es Palmador. It seems like the easiest thing in the world, but it wasn’t such smooth sailing convincing Ibiza’s dockside community that diesel was overrated. 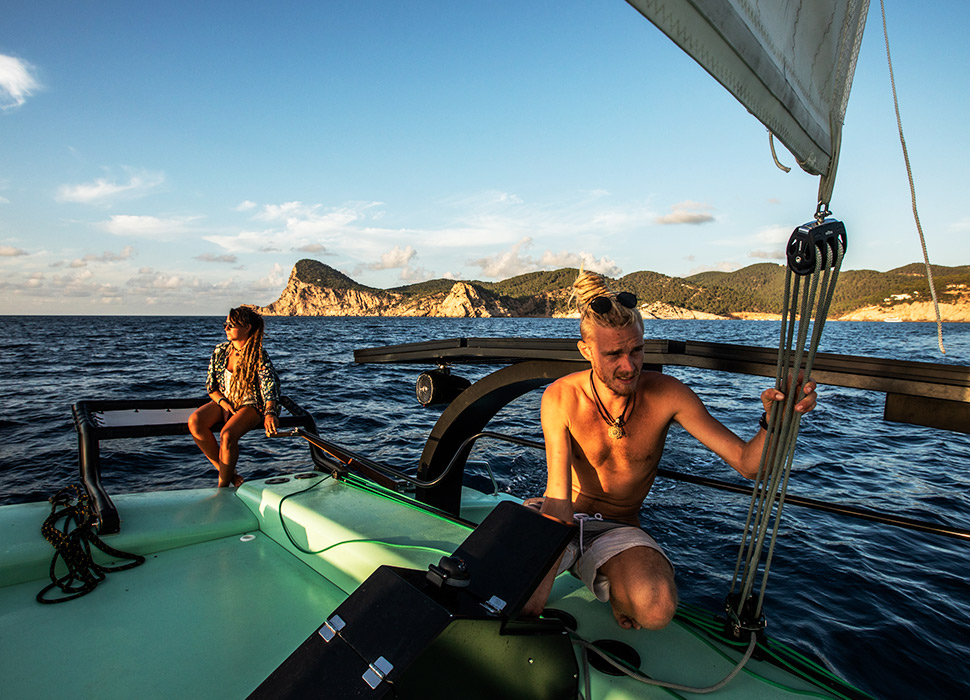 Bobbing on 'The Beautiful Green’

“The boat’s owner almost fell into the dock laughing when we told her the idea,” says Ali, while wrapped around some rigging. The boys were told it would be impossible – it would mean changing the way the entire industry and their fleets ran. Undeterred, they bought their first catamaran and converted it to an eco catamaran.

This original was named La Bella Verde (‘The Beautiful Green’). Solar panels sat in place of the usual huge engines, providing financial benefits to match the ethical ones. Now, by 11am every morning, each boat in their group of seven (including what’s sure to be the most-requested vessel of this year’s season, named Sexy Beast) has already been powered up by the sun enough to last a full day on the water.

There’s no noisy engine – no noise at all, in fact – so it’s the crew’s choice if they fancy a peaceful, meditative jaunt out to sea or if they want more of a party vibe, like us, and to soundtrack the day with some Balearic beats from an onboard sound system (solar-powered, of course). The catamaran has an extremely shallow hull, which means La Bella Verde’s boats can get up closer to the coast than other same-sized vessels – a massive bonus for swimming ashore to secret, empty beaches, especially during the peak month of August. 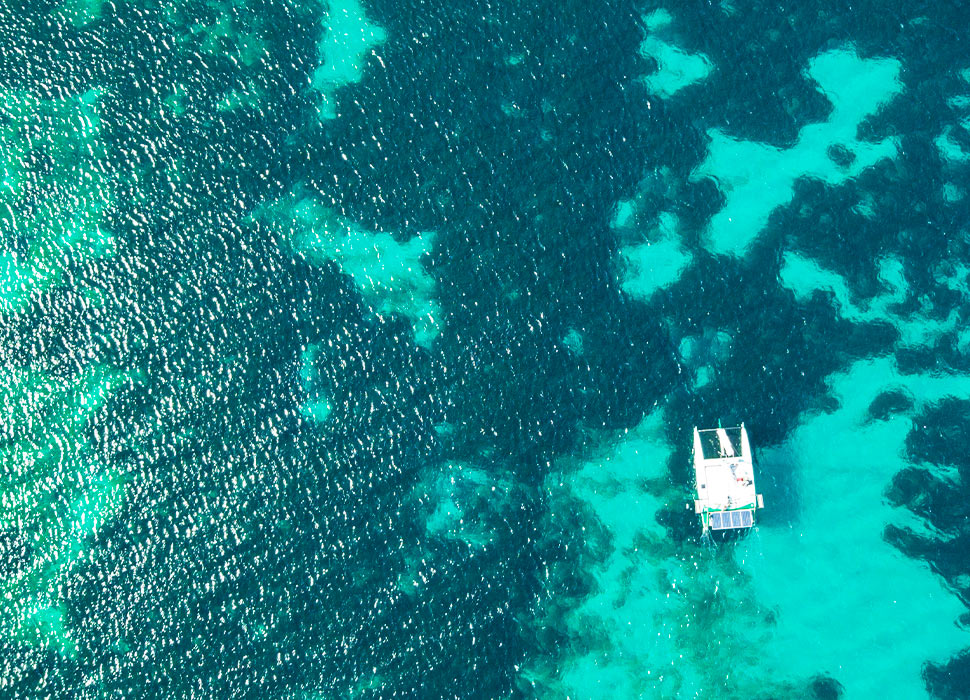 Deep below us is the world’s largest and oldest living organism: posidonia. This is an 8km span of green seagrass, also known as the sea meadow. It’s more than 100,000 years old, has been named a World Heritage site by UNESCO and is responsible for sustaining marine life such as a dwindling seahorse population (who knew?), as well as cleaning the waters from pollution.

The posidonia also suffers from irreparable damage caused by boats anchoring on top of it, something that campaigners, like SOS Posidonia and other local organisations, have been working hard to prevent. La Bella Verde’s catamarans are some of the only boats on the islands that do not disturb the delicate greenery.

The wider project of making Ibiza and Formentera green beacons in the Med means there’s plenty more work to be done on land, too, so La Bella Verde organises beach clean-ups in conjunction with associations such as the Ibiza Preservation Foundation. This is one of the organisations that’s pushing the Balearics’ plastic-free agenda, as well as encouraging more chefs and restaurants to work alongside local farmers and use zero-miles seasonal produce in their menus – off the back of which initiative the future is thriving. 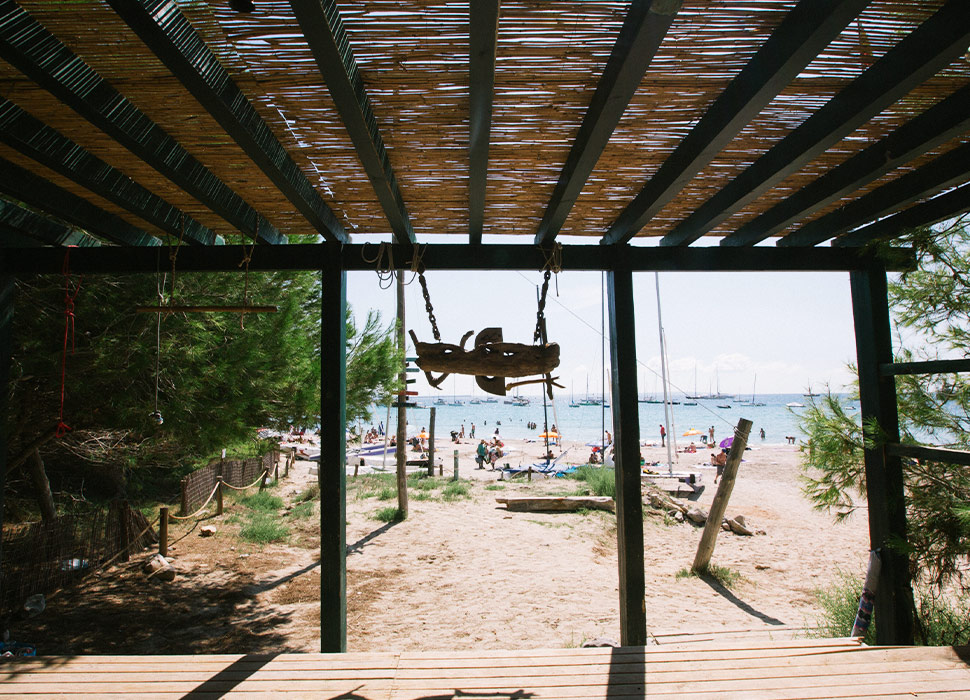 Beach life (it's the only life we know) / Image: Essential IbiZa

For me it means today’s lunch is as virtuous as it is delicious, as Clint, the ship’s chef, spreads out a feast on the beach. We jump out of the boat and, were it not for the Spanish flag flying proudly from the mast, I’d think we were in a Caribbean hideaway – there’s a beautiful white-sand beach and the warm, turquoise sea matches the colour of the boat to the exact same Pantone shade.

An inelegant wade through the waters later, there’s a meal I’d happily be marooned for: sea bass ceviche; almond, avocado and sundried tomato quinoa; gazpacho; and truffled heritage tomato and buffalo mozzarella salad. All organic and, where possible, all either purchased locally or from La Bella Verde’s own garden. While we’re eating, a tiny lizard runs up to our picnic, nibbles me on my little toe, then thinks better and shoots off after nabbing a rogue almond on the sand. 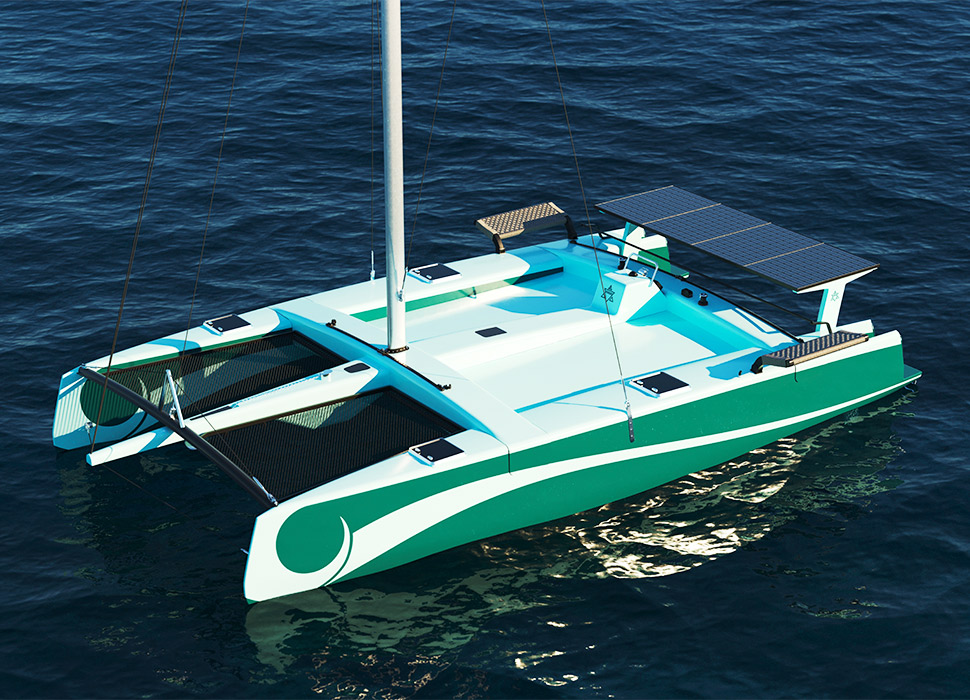 It seems like such a simple idea: go back to basics and use the natural energy that the islands are blessed with, but also recognise things can only change with a positive attitude – which comes in waves from the crew – and by collaborating with other islanders. Surely some of the other savvy boat-chartering companies will be eyeing up La Bella Verde’s popularity and launching their own versions.

“That’s the whole point,” says Charlie, a trained marine biologist and former promoter for superclub Amnesia. “It’s not about being rivals, or us owning the concept. We want to revolutionise the industry. In an ideal world, everybody will be sailing on solar-powered boats. We’d love to see other companies follow us.”

The trend for sustainable sailing is also going global – La Bella Verde is currently working with a number of boat owners across the world to help them build solar-powered boats, show them how to charter ecologically sound trips and offer useful advice on marine conservation. The future of sustainable sailing with this green dream team at the helm? It’s shipshape, mate.