The hottest tracks in Ibiza: hiking the White Isle

The beautiful people are going walkabout in the Balearics. We join them and set off on the trail of Ibiza’s legendary ‘rave cave’

I’m back in Ibiza and my heart is racing. I’m sweaty, happy – euphoric even. I feel like the world is full of light and wonder, and I want to share my experience with everyone. That’s the effect of the White Isle. But, whereas in previous years I’d have felt like this in the middle of a superclub as the beat dropped for a 4am crescendo, this time I’m high on a cliff, gazing across an azure bay, catching my breath after a morning skipping up and down sandy paths.

Below me there’s a giant rock face with its centre completely eroded, like someone has opened an invisible door through the tons of sandstone. Through it, I can see waves crashing and the stunning shoreline of the west coast of Ibiza stretching out for miles. 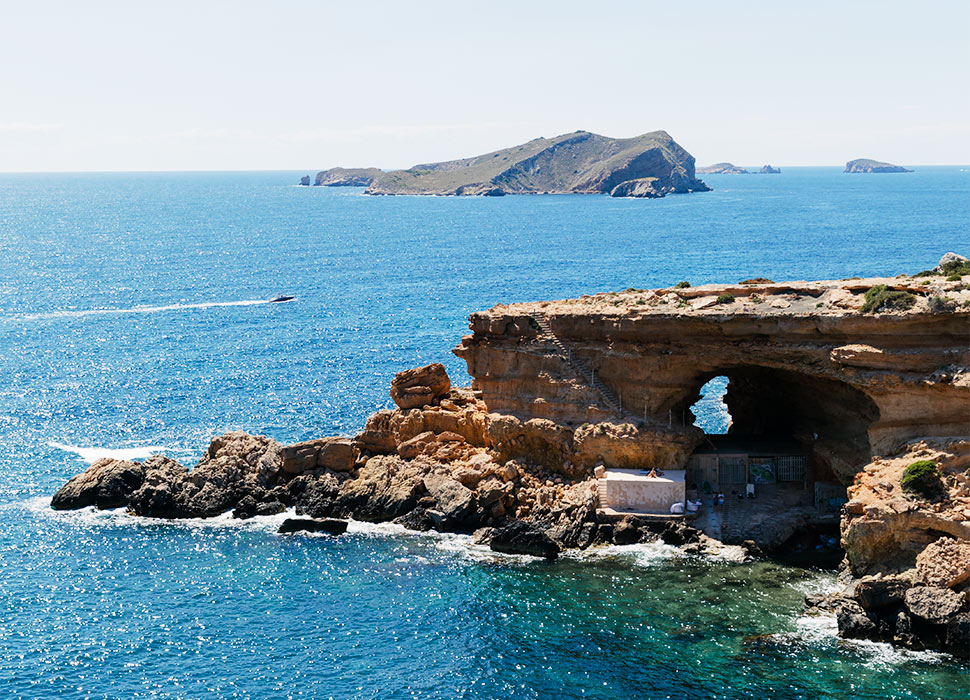 “Beautiful, isn’t it?” says Toby Clarke, my companion for the day. Toby’s the founder of Walking Ibiza and, along with his little dog Cosmo, we’re now scrabbling down some perilously steep steps, clinging on to a flimsy rope handrail, in order to enter the mouth of the rock formation. “This is the famous rave cave,”  he tells me with a grin.

I’d often heard that some of the best and wildest parties in Ibiza had been thrown in a remote prehistoric cave, but I’d just presumed it was an urban myth, told by old ravers and recounted by sunstroke-suffering tourists. But now I’m actually standing in it – a venue surrounded by the surf of the Balearic Sea, which back in the day hosted illegal parties, where crowds of thousands gathered to watch Pete Tong or Carl Cox spin secret sets until things were invariably shut down by the police. 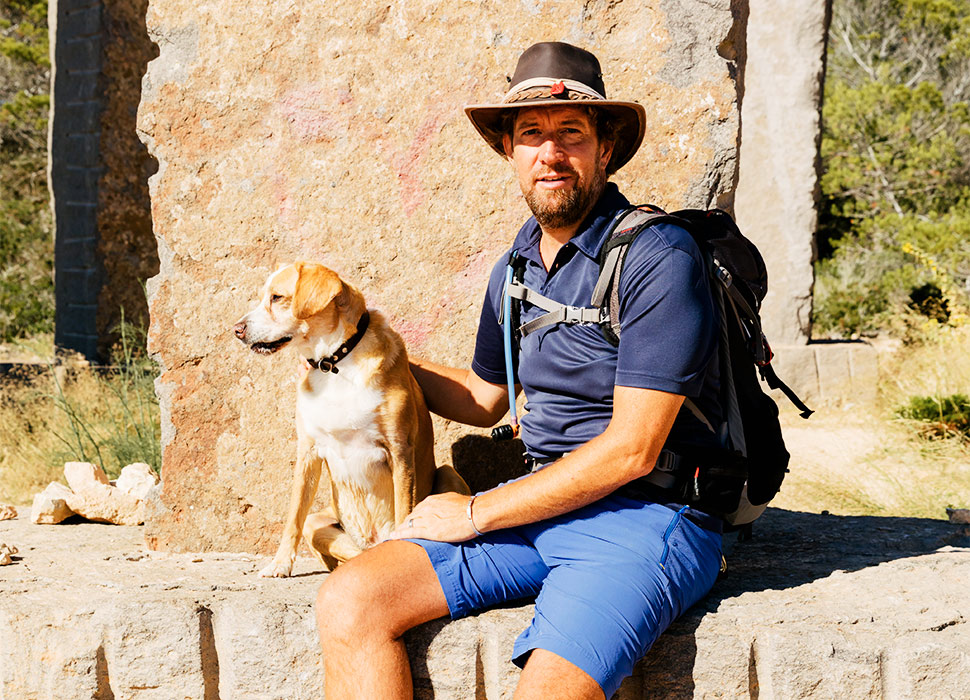 It seems fitting I’d discover this landmark on my first-ever Ibiza hike. I’m following in the footsteps of an increasing number of young, beautiful and holistically minded tourists who, in previous years, would only have come here for an epic party, but more recently have been inspired to follow miles of cool coastal walkways, venturing inland through pine forests, and orange and olive groves. It’s an activity for mind and body, and therefore chimes with Ibiza’s new status as a centre for rest and healthy living. Except, you don’t need to pay thousands to an all-inclusive, body-transformation company to enjoy the benefits.

I feel like the world is full of light and wonder. That’s the effect of the White Isle

This was the realisation of one man (and his dog): Toby. He had an idyllic childhood in Ibiza, but ended up in a soul-sapping corporate job in the UK. So, in his thirties, he quit, sold the family home and moved back to his beloved island with his wife. Having first started a walking club for the local community, in 2011 – thanks to a local law that gives the first seven metres from the entire coastline a right of public way – he set himself a challenge: to walk round the whole island with just Cosmo, a cheap tent and €1. “Long story short,” he says, “I survived – and it was amazing. It took me 11 days to do it and when I got back, people started asking if they could join me next time.” By 2018, Toby was taking 8,000 visitors hiking a year.

“I’ve seen huge growth, because people want to do something on Ibiza other than get drunk and go clubbing here,” he says. His past guests have included groups of twentysomething friends doing a whistlestop party weekend, families who’ve come for summer holidays, reality-TV stars and even the daughter of a Russian oligarch – who brought her security detail of five henchmen, all suited and booted, along for the trip. 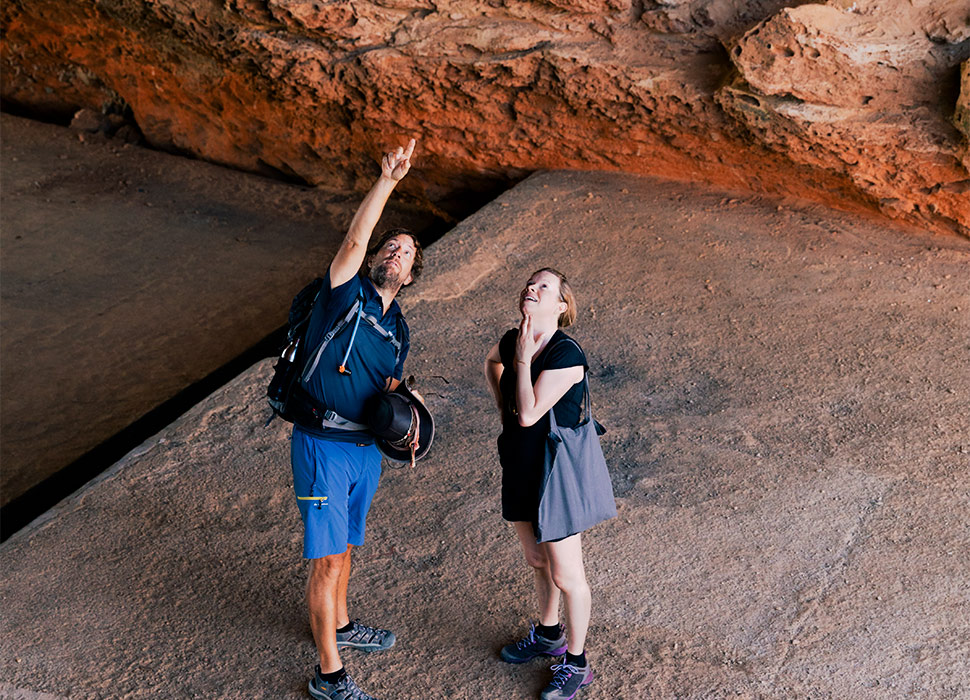 Toby points out the smugglers’ secret room in the cave / Image: Ben Read

Today, it’s just me here for a special two-hour hike that Toby runs regularly and that he says will be an easy-ish introduction. It begins on the south-west coast of the island by the rave cave, near Cala Comte. Over the eight million years or so that Ibiza was formed, Toby says, the sea and wind have worn down the sandstone in the cliff, creating a platform with a high arch in the rock above it. I know there have always been little fishermen’s huts here, but Toby pulls open a door that appears from nowhere: it’s seemingly cut straight into the stone.

“This used to be a smugglers’ den, used extensively during the rule of Franco and the Spanish Civil War in the 1930s, when alcohol and cigarettes were illegal. They would be stashed here for islanders to collect,” he explains. Now, the only plunder to be had is some empty cans of beer in an old stone bath – the remnants of a previous DJ’s rider at the last big party held here, perhaps.

As we walk out and peer over the ledge down to the rocks and tiny stretch of sand below, there are a few local lads by the huts setting up for an afternoon of sunning themselves with a bottle of rum, a pestle and mortar, some limes and sugar. “How much for a Mojito, then?” Toby jokingly asks. “Twenty-five euros,” they yell back. Pretty standard fare for Ibiza, I think. We laugh and decide to stick to our bottled water.

The route is tough work in parts: up steep, dusty and uneven rocky areas that require careful steps. In other places, though, the landscape opens out into a green carpet, giving us the chance to admire some of the local flora and fauna. 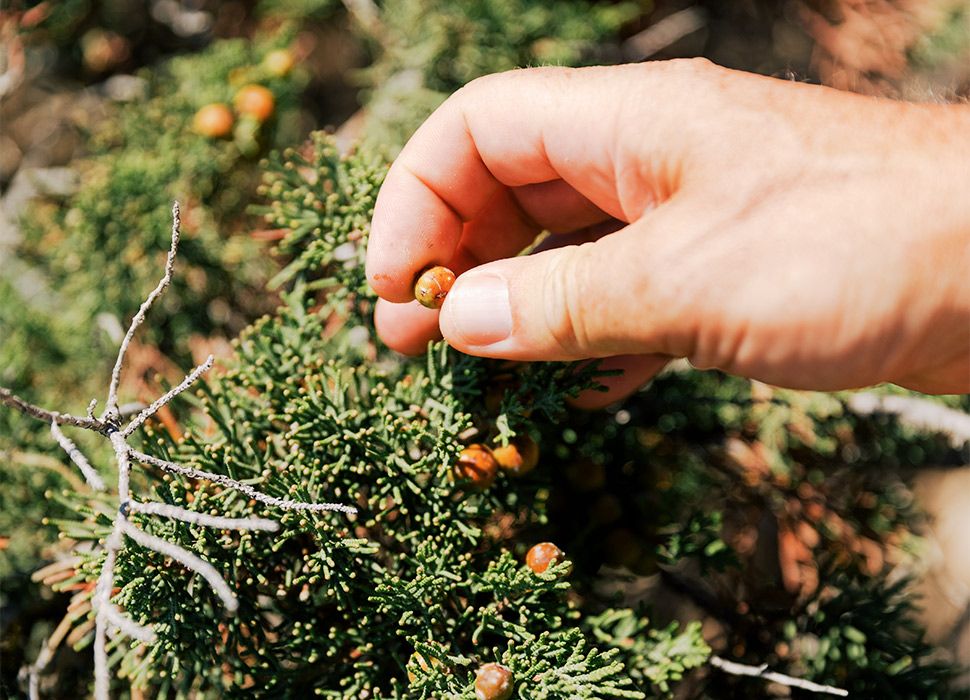 “Try this.” Toby brandishes a few small spiky green leaves. “What do you think it is?” I chew thoughtfully. It’s very salty and a little grassy – is it samphire? “Correct!” he says. On the surrounding rocks, threateningly close to a 20-metre drop into the sea below, he picks out Phoenician juniper berries – not used for gin, but as a traditional sweetener in local pork dishes on Ibiza. There’s some wild asparagus and purple carrots to be foraged, as well as wild thyme and rosemary, curry plant and sea lavender, which has a slightly citrussy smell. At his suggestion, I take a few stalks of the lavender to stick under the pillow in my hotel. It turns out that Toby knows the island better than any hastily downloaded GPS or map app. He’s also very easy to talk to. I end up telling him all about my life in London – and wishing I had his.

“I find it’s a bit like natural therapy doing these walks,” he says. “It’s actually called parallel walking. If you’re sitting on a sofa talking face-to-face with someone, it’s much harder for them to talk frankly. But if you’re walking side by side, they can be more open.”

We’re having a good chit-chat, but there’s far more to the power of walking, he adds, which human inhabitants on Ibiza would have been doing here from 5000 BC. “Walking totally resets the body, because it’s what we always used to do, throughout all of evolution. But we lost the way of walking and now we’re sitting down at computers most of the day, and even if we do walk, we’re hunched over our phones, not taking the space or time to look around us and not connecting with people. I find walking becomes like meditation.

“On quite a few walks, people in a group of strangers become best friends by the end of the trip. And, following it, people have told me that they’ve quit jobs, left bad marriages – walking and talking has given them the confidence to do what they wanted to do.”

He tells me that his new favourite way to hike is barefoot – it’s called grounding. The science (of sorts) behind it is that we all have static energy built up in us because our feet are constantly covered in rubber soles and we never connect directly with the earth any more in order to release it. That’s something I’d need to work up to, though – today, I’m thankful for my thick-soled hiking boots. 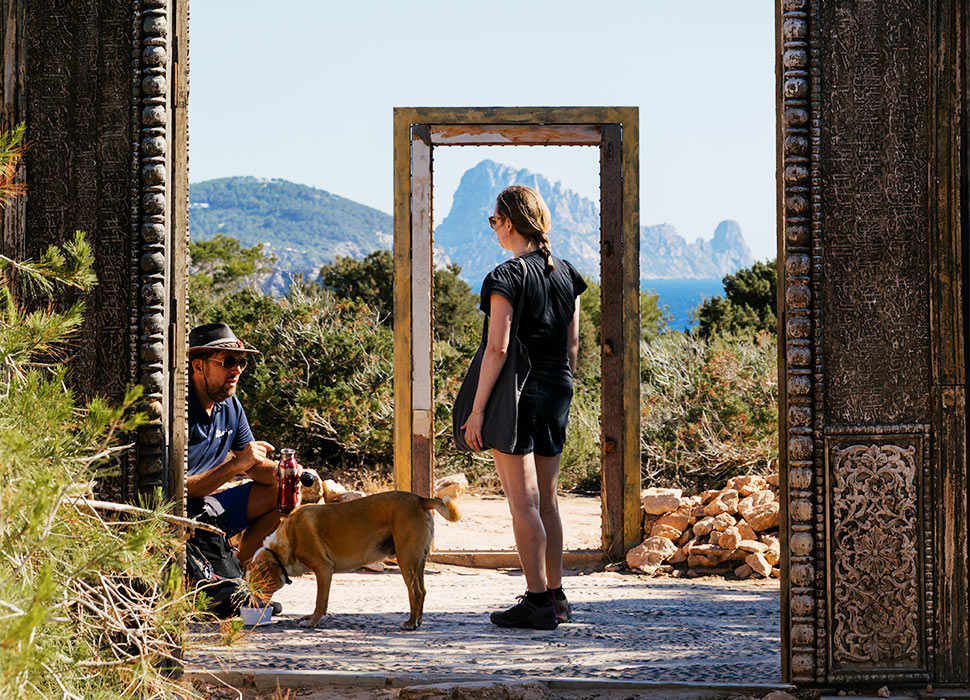 The doorframes by Ibiza’s version of Stonehenge / Image: Ben Read

We set off at a march before almost walking smack-bang into a set of giant metal doors, apparently randomly placed in the wilderness. Toby has a twinkle in his eye as we push them open to reveal another door – just the frame this time – with an elaborate mosaic tiled floor that Cosmo seems to be dancing over. It all feels very Salvador Dalí-esque. The surrealness continues, as once through the set of doors is what can only be described as a mini-Stonehenge of 13 eight-metre high rock slabs set in a circle, with the tallest one in the centre. Is this… Ibizahenge?

Toby fills me in. The basalt columns of the piece – officially called Time and Space, and created by Australian artist Andrew Rogers – turned up seemingly overnight in 2014, installed by the Canadian billionaire co-founder of Cirque Du Soleil, Guy Laliberté. In 2009, Laliberté reportedly paid $35 million to a Russian space agency to go into space. While up there, seeing the Earth as a tiny blue-and-green planet, spinning merrily on its axis through space, he experienced a life-changing moment of clarity. Once back on terra firma, he became obsessed with making contact with life beyond our planet. Hence, he erected the stones as a sort of portal to whatever’s out there – much to the consternation of the local authorities, who tried to fine him. Oh, and he’s also responsible for the surreal doors too, as they’re all within spitting distance of his luxury villa on the island. 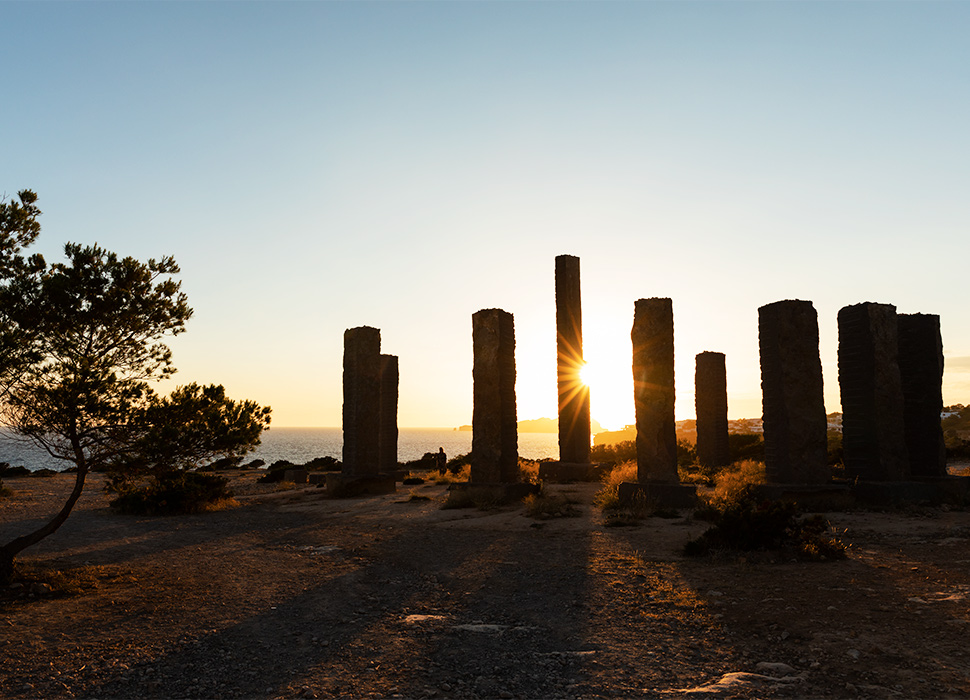 Is it art? Or a physics experiment? Does it have a deeper spiritual meaning? Toby has some theories. He has worked out that the stones are set apart according to the increasing numbers on the Fibonacci sequence and the final centre stone is washed in 24-carat gold at the tip. The way it’s positioned, he explains, means that when the sun sets on the horizon of the winter solstice, the light is reflected on the stone and that will then shine out into the distance, hopefully to a galaxy far, far away.

All around us are miniature stone circles, little towers of rocks, even some heart-shaped stone formations placed by visiting members of the public. When we arrive, there are several people already here, snapping pictures of the installation or sitting down and looking out towards the mystical rocky island of Es Vedra, that looms like a film backdrop in the deep turquoise sea.

But, remarkably, as the day readies itself to end, the area empties. The red sun, low in the sky, enlightens each tower, washing them all in radiant heat and a golden copper hue. It might be a modern sculpture, but it feels connected to the island’s ancient energy. The whole site vibrates like the skin of a drum.

It’s an incredible place to finish our hike. Having seen more sunsets – and post-club sunrises – on Ibiza than I’d care to admit to, I’ve never seen one like this. Our walk has led me to a spot to see the island in literally a whole new light. There are no comedowns here, just climb-downs to the beautiful beach below.