The sea is in sight from the boardwalks of Aqaba

Jordan's seaside jewel is perfectly placed as a jumping-off point into the best the Middle Eastern country has to offer. It's especially brilliant for children – and here's why

The sea is in sight from the boardwalks of Aqaba

While winter sun favourites like Egypt, Morocco and the Canaries swell with tourists in the cooler months, Aqaba in Jordan still flies mostly under the radar. Like Egypt's Sharm el Sheikh, it’s on the Red Sea, which means year-round warm waters, fantastic depth visibility and lively corals mobbed by fish. But for families, Aqaba is far more than just a dive resort. It’s a jumping off point for Jordan’s most important attractions, Wadi Rum and Petra. And within the city itself new development projects have introduced family-friendly accommodation and kids’ entertainment. The icing on the cake? Average daytime temperatures rarely dip below 20°C – even in January.

If it's the Egyptian side of the Red Sea you're after, check out our guide to what's what in the resort of Sharm el Sheikh.

Or sack the lot for the Med! Which Greek island is right for you? 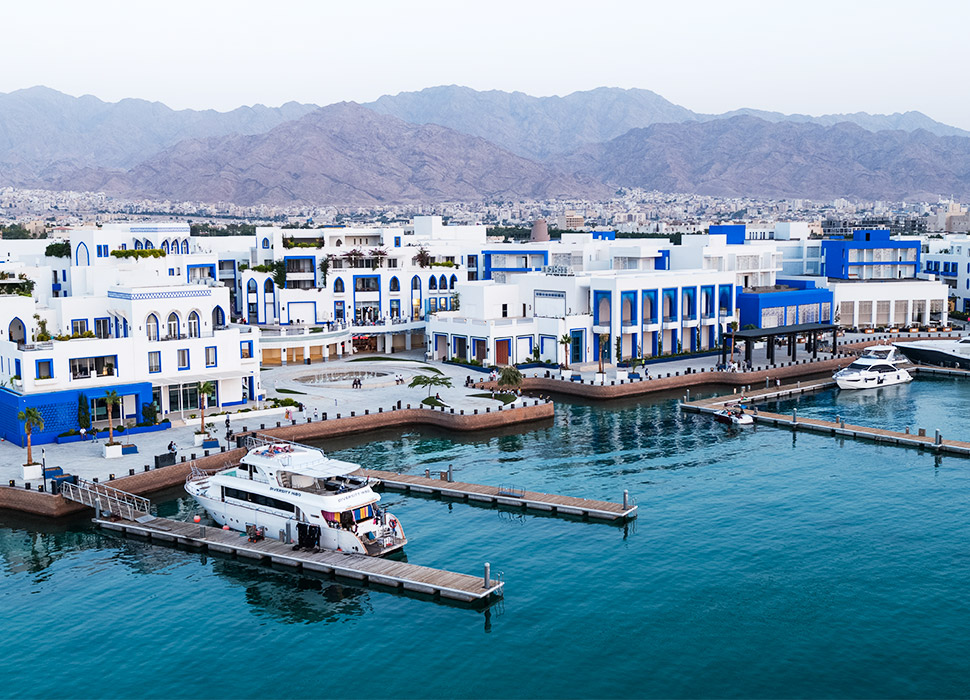 Ayla's marine village is a the district's characterful focus

Within walking distance of downtown Aqaba, Ayla flooded a disused desert area of 4.3 million square metres to create a new waterside district, that has completely reinvigorated the town’s tourism potential. The heart of the development is the marina village, which has taken the blue-and-white colour palette of the Greek islands and mixed it with North African design influences to create a modern, characterful medina of family-friendly restaurants, bars and shops with fountains and colourful wall murals. 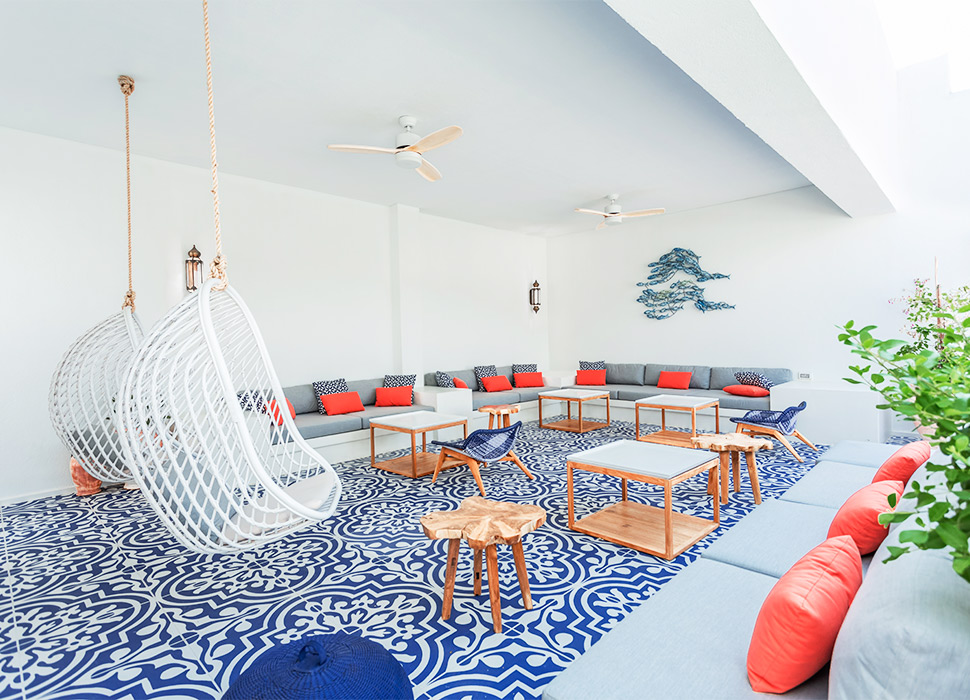 Chic interiors at a Cloud 7 apartment

The village’s Cloud7 apartments opened in 2020 with separate bedrooms, full kitchens and generous balconies – perfect for family breaks. At night, those with young kids can order from the marina restaurants as room service. The complex’s Hyatt Regency also has a gorgeous spa for adult R&R that wouldn’t look amiss in the pages of a design magazine – and a kids’ club and heated pools, for those who prefer a splurge hotel to self-catering. 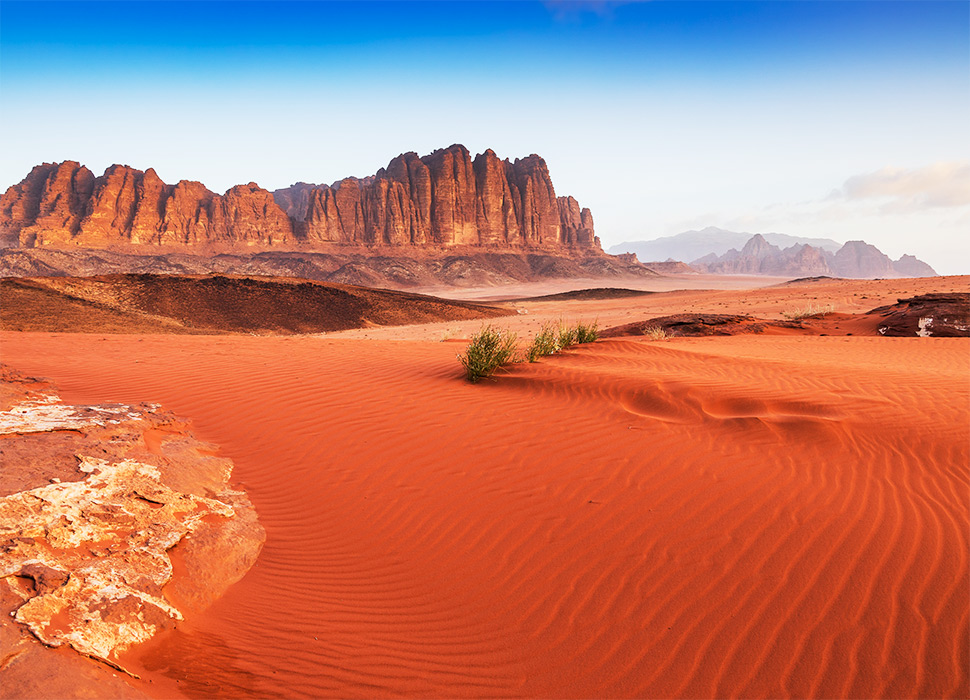 If your kids are the type who can spend hours digging in sand at the beach, Wadi Rum will blow their mind. This amazing protected desert wilderness stretches for 280 square miles outside Aqaba and it’s so otherworldly that it’s become a favoured filming destination, featuring in blockbuster sci-fi and fantasy films such as Star Wars, Aladdin, The Martian and Dune. Granite and sandstone towers mushroom out of nowhere to disrupt the vast skyline, creating echoey canyons that shelter Bedouin tents and low-impact tourist camps.

Explore the cosmos with RumSky Adventure

Knuckle-whitening, highly entertaining jeep tours with a pit-stop for bush tea are the primary attraction for families, but it’s absolutely worth spending a night in one of the camps so your kids can go sand-boarding down the dunes before dusk, plod off into the sunset on a camel, then huddle around a campfire and see roast lamb cooked Bedouin-style in the ground. Sun City Camp is a comfortable option that has elevated two-bedroom, ensuite family chalets with expansive decks overlooking the sandsea and in-room heating (it can get chilly in the desert after dusk). Just a five-minute drive from there, you can try family-friendly star-gazing at RumSky Adventure.

You can ogle an underwater tank reef 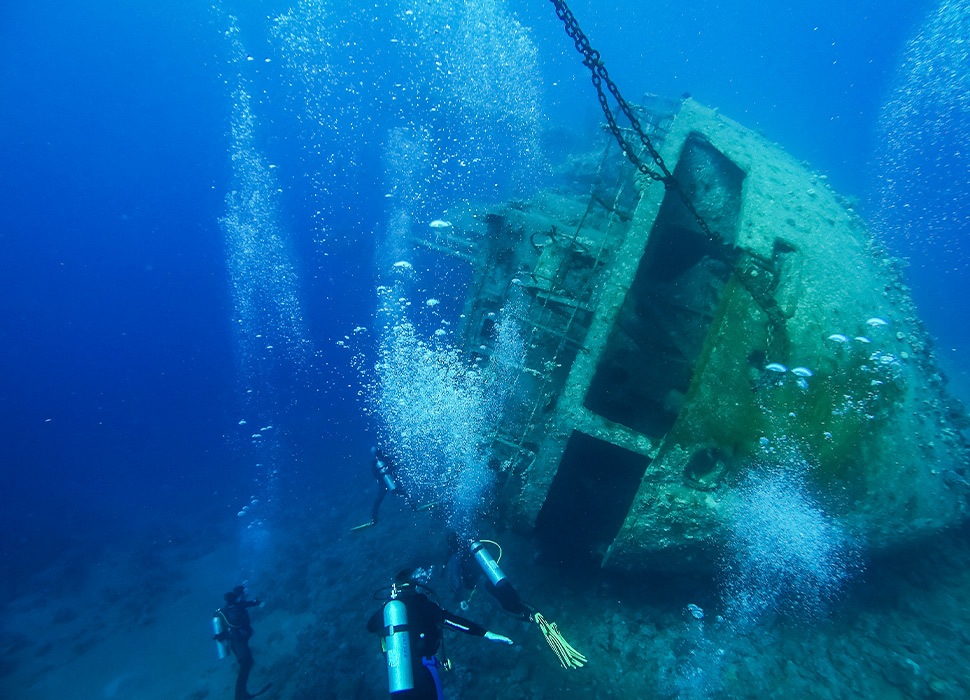 'The tank' is an undersea marvel that kids will love / Credit: Adobe Stock

While your kids will need to be a minimum of ten years old to try diving, younger water lovers can still get an eyeful of Aqaba’s underwater jewels on a glass-bottom boat tour (the cheapest launch from the public beach). The primary attraction is a number of shallow wrecks that have been sunk to form artificial reefs within easy distance of Aqaba’s shores. The ultimate crowd-pleaser is ‘the tank’, a military vehicle that is slowly being claimed by the ocean at a depth of just six metres, making it really easy to gawp at on a short boat trip. Kids are guaranteed to rave about it for days.

There are beaches galore 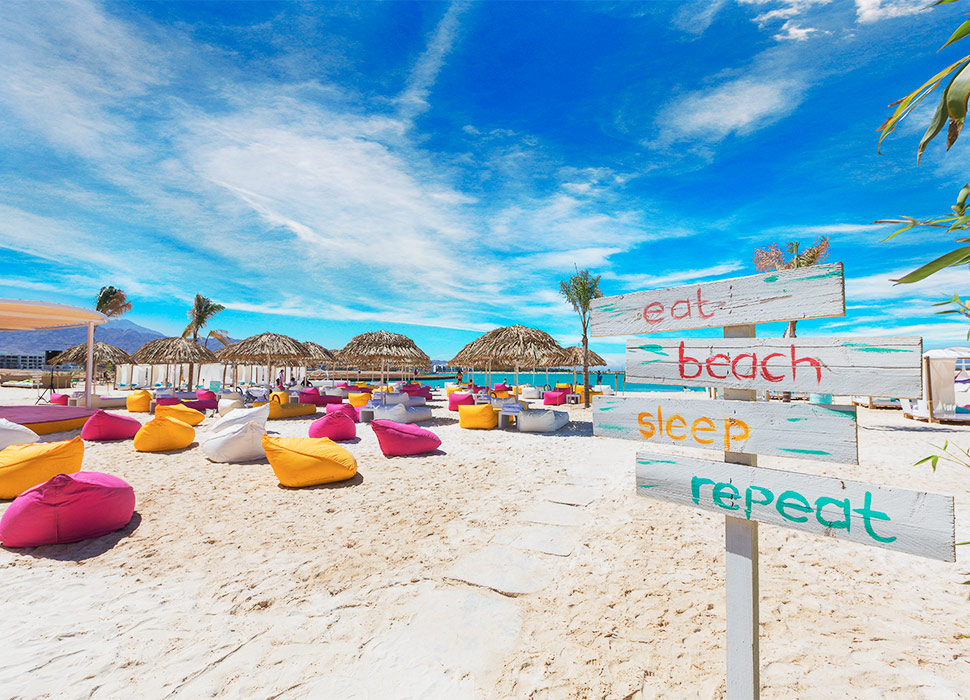 Though the sands in Aqaba are no match for Egypt’s Red Sea pin-up Sharm el Sheikh, there’s a beach here to suit every mood. Downtown Aqaba’s public strip is a great place to mingle with Jordanian families throwing balls and playing music while school kids cool off in the shallows on weekends. Aqaba’s Ayla complex also has a clutch of family-friendly beach clubs. These sandy play dens come with the sort of conveniences that make family beach days easy: beach towels and shady sun loungers, drinks and food service, and clean changing facilities with toilets and showers.

Try B12 – which has Blue Flag beach status – for a barefoot boho vibe, with hammocks and a laid-back eating area with comfy sofas; the Hyatt’s La Plage has more sophisticated leanings and a sunken fire pit area for sundowners on cooler evenings.

It’s only two hours from Petra

Voted one of the seven New Wonders of the World after a 1989 starring role in Indiana Jones and the Last Crusade, the rock-hewn ancient city of Petra is what draws most tourists to Jordan. While visitors commonly approach it via the main international airport in the capital of Amman, Petra is actually easier to get to from Aqaba. And in 2019 the UNESCO site finally got a museum worthy of its rich heritage, with interactive displays and artefacts that have never previously been on show to visitors, demonstrating Petra’s importance as a Nabatean stronghold – great for budding historians. Families can travel on horseback down the long canyon to the site entrance and kids love scrambling among the rocks, peering into 2000-year-old tomb caves and hauling themselves up to steep viewpoints. 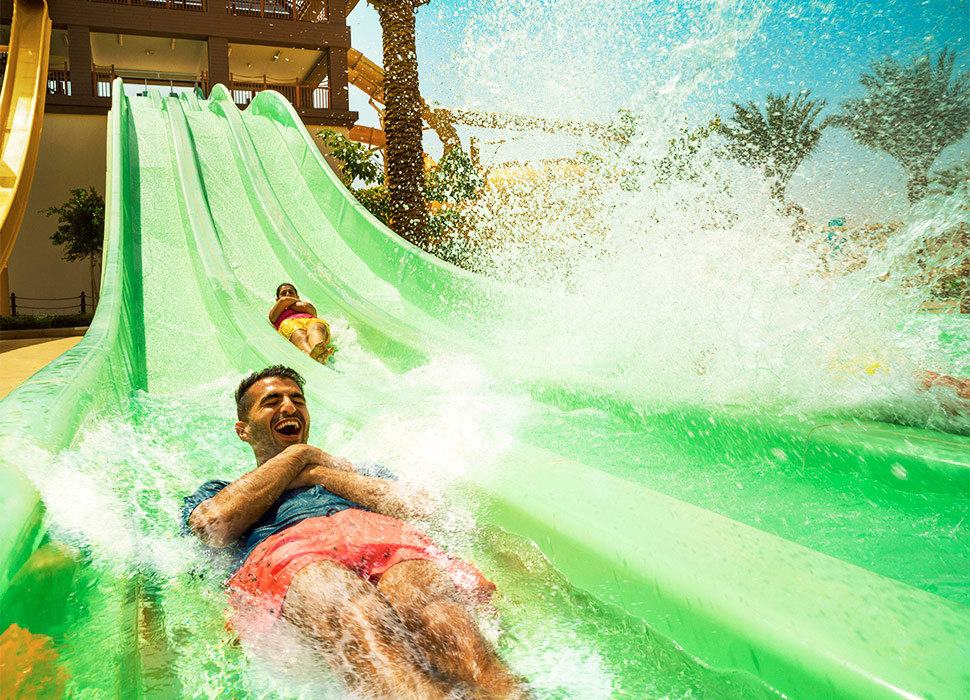 Who needs historical treasures when you've got waterslides?

The beauty of Aqaba is that you can do nothing but lie on a sun lounger if you want, or you can bounce between different activities every day. Jordan’s largest water park, Saraya, opened in 2021 with more than 25 water slides and replicas of the country’s historical landmarks. At Rise High Rise adventure park, older kids can try the dizzying rope course and ziplining or crazy golf. The B12 beach club is home to Aqaba’s cable wake-boarding centre (more difficult than it looks), stand-up paddleboarding and gentle kayaking around the lagoon. There are also inflatable water castles that rotate around the beaches, plus a city aquarium where little ones can glimpse Red Sea residents such as parrotfish.

Kids can get arty with the locals 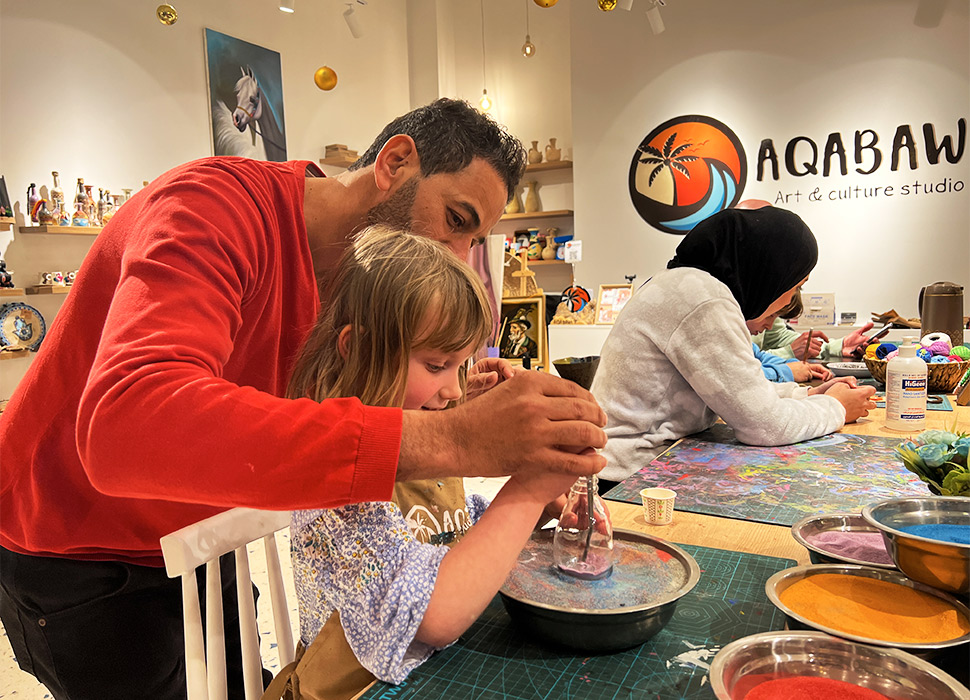 Social enterprise Aqabawi was set up in 2018 as a way to connect tourists with the area’s often-overlooked Arab and Ottoman cultural heritage while creating new income opportunities for locals. The primary focus is on artforms like pottery-making, which flourished when the 7th-century Islamic city of Ayla –on which Aqaba now stands – was an important sea port for the Arabian Peninsula. From Aqabawi’s bright studio in Ayla’s marina, families can try their hand at traditional techniques in clay pottery, sand art and sea glass. Classes are led by locals who Aqabawi has trained up in ancient crafts, with their work also available to buy in the studio. Budding chefs can join an Aqabawi cooking class at a local family home outside the city.

Jordanians have a sweet tooth

A lasting legacy of Ottoman rule in Jordan is the country’s obsession with sweets and delicious syrupy pastries – a real treat for adults and kids alike. To get the full, sugary hit, join Jordanian families on a pilgrimage to one of their most famous pastry shops and make an afternoon tea of it. Nafeesa and Anabtawi both have shops in downtown Aqaba and sell the full gamut of tooth-crackers. Try knafeh, a gooey hit of sweet and sour with a syrup-drenched, pistachio-scattered crust and mozzarella undercoat; baklava (you may have tried the Greek version), with its multitude of syrup-soaked filo pastry layers; or the coconut-infused semolina cake basbousa.