The best things to do in Porto

Tantalising tiles, outlandish sandwiches, some of Portugal's best architecture, and barrels and barrels of fortified wine? The beguiling city of Porto's got the lot 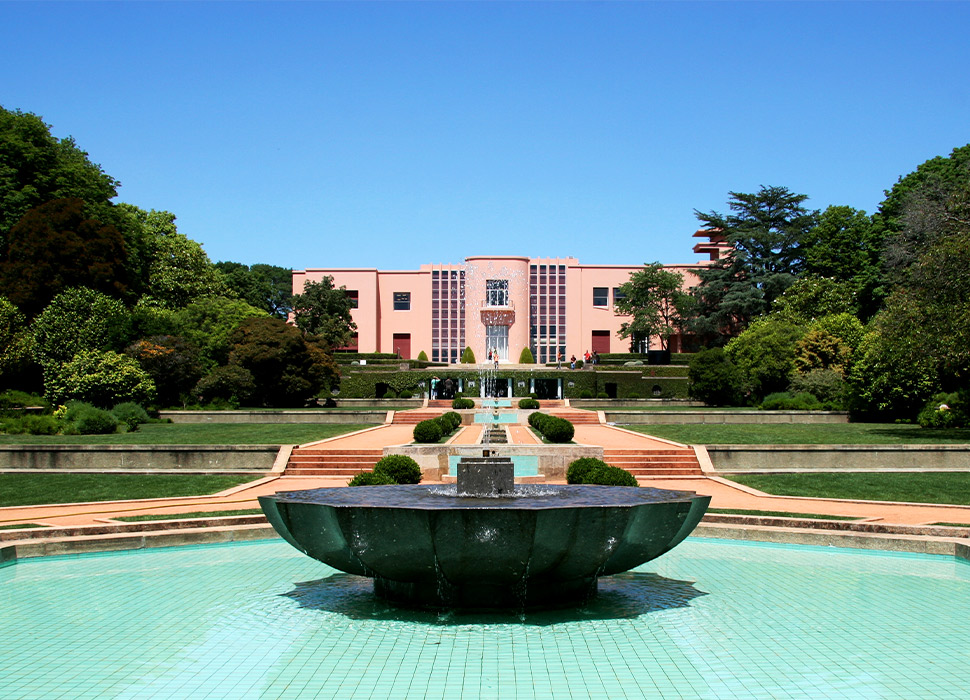 Visionary, uber-wealthy 20th-century Portuguese aristocrat Count Carlos Alberto Cabral was a cultured dude, who loved discovering art and hobnobbing with the artisanal elite of Europe. His legacy is the disgracefully cool Serralves Villa, a millennial-pink art deco manor house set in 18 hectares of exquisitely manicured grounds, themselves home to some 200 species of indigenous and ornamental exotic plants. Not enticing enough? There’s also the on-site Serralves Museum of Contemporary Art – an architectural jewel in its own right – and a cinema. Collectively, it's one of the world's most important cultural institutions – rich pickings indeed. 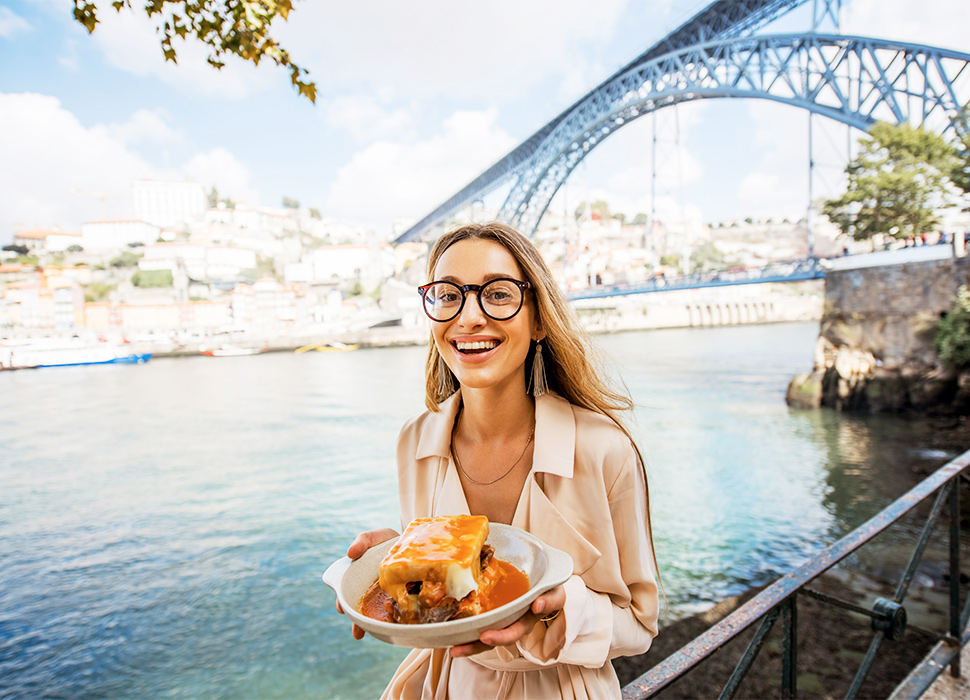 3. Search out a snifter in a port cellar 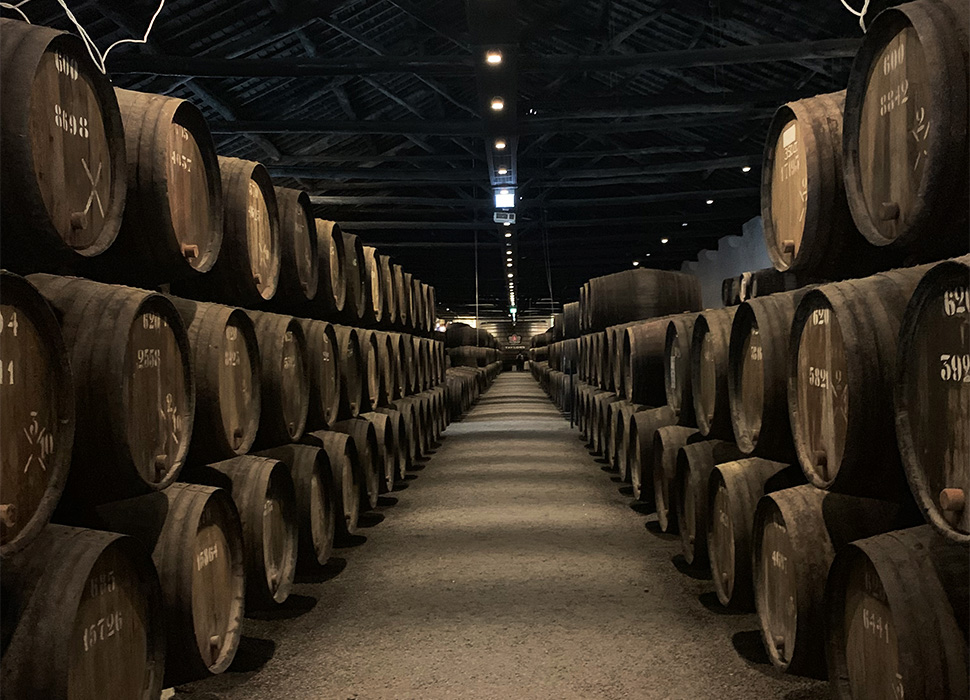 A cellar like this should be your first port of call / Credit: Tracey Griffin

Made with grapes from the surrounding Douro Valley, port wine is sweet, rich and potent – often a nice, punchy 20 percent ABV – and sinking a glass or two at one of the esteemed port houses of Vila Nova de Gaia (just across the river from Porto proper) is a must. You can’t go wrong with a tasting tour at Ferreira (at 70 Avenida de Ramos Pinto), where they’ve been bottling the good stuff for 250 years now. Graham’s (at 141 Rua do Agro) is another big hitter, with centuries of tradition and the novel opportunity to actually watch the distinctive ruby-red tipple being made and packaged. But houses abound – Sandeman, Cálem, Offley, Taylors and more are all within strolling distance – so you'll never be short of a spot to wet your whistle.

4. Mooch around the market at Mercado de Bolhão 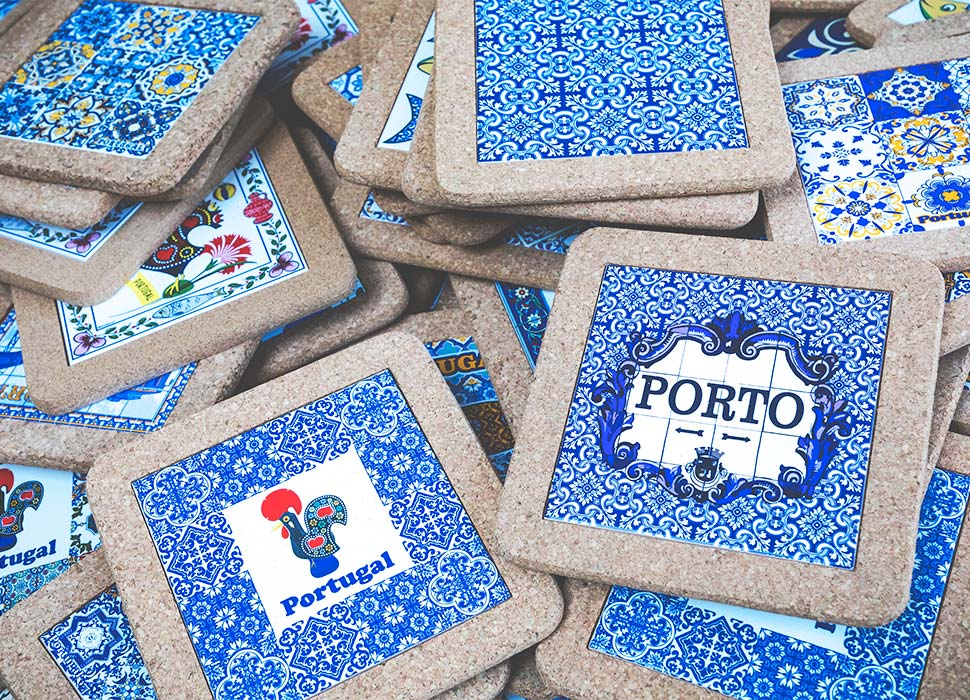 See, touch and taste for yourself just how much they dig local produce around here with a mosey around Mercado de Bolhão. Situated in a pretty 19th-century wrought-iron hall on a slope overlooking the inner-city Douro, it’s divided by secants into different areas: the butchers, the cod-slinging fishmongers, etc etc. The hall echoes to the shrill cry of the vendors' pregão – sales banter, basically – and the sparkly zing of the traditional knife-sharpener, who sets up his stall by the main entrance.

5. Wander over the double-decker Dom Luís I Bridge 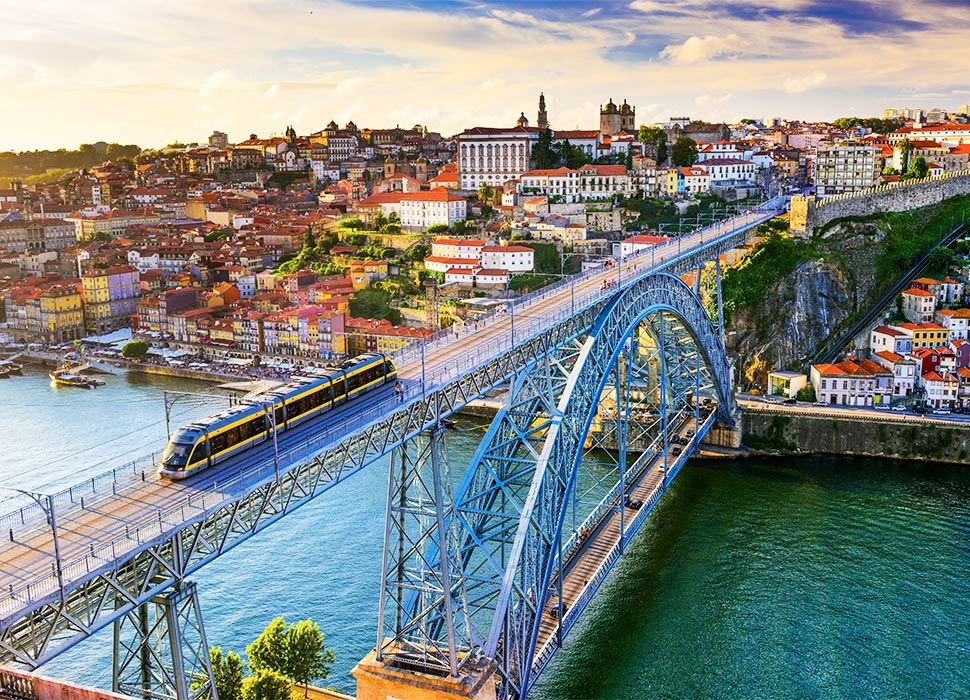 Steel yourself for some excellent views of Porto / Credit: Getty Images

Don’t let anybody tell you Porto’s iconic span was knocked up by Gustave Eiffel, of the eponymous tower fame. It was actually one of his apprentices, a German chap named Théophile Seyrig. Still, it’s a vast improvement on previous Douro-crossing arrangements – back then locals would apparently lash a load of boats together and hope the tides weren’t too rough that day. Nowadays it carries a busy road, the metro and a very lovely walkway along the elegant upper deck, commanding superior views of the Porto skyline. So it’s an eyeful, either way.

6. Discover the magic of reading at Livraria Lello 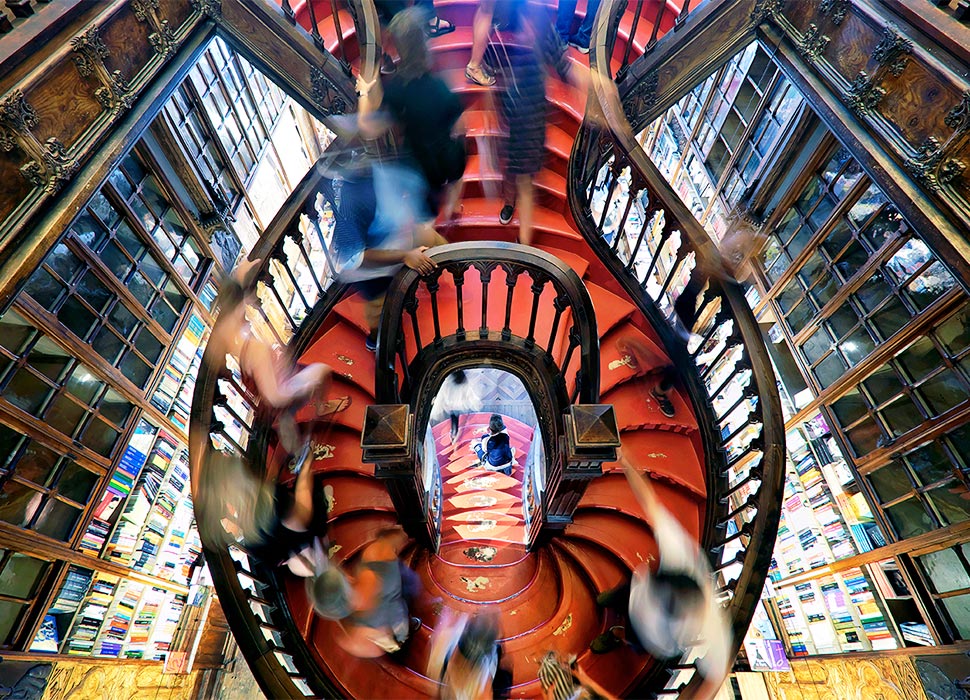 Photography is banned, but we snuck one anyway / Credit: Alamy

JK Rowling lived in Porto when she was writing Harry Potter and the Philosopher's Stone. And even though she’s recently said she doesn’t quite remember visiting this specific bookshop, even the most diehard sceptic has to concede that the theatrical, kinda-gothic interior and serpentine central stairway of Livraria Lello has an uncannily Hogwarts vibe about it. Potter fans pay pilgrimage in their droves, because it’s magical and beautiful and well worth supporting. Never mind 'Expecto Patronum', though – you should probably just Expecto Massive Queues. 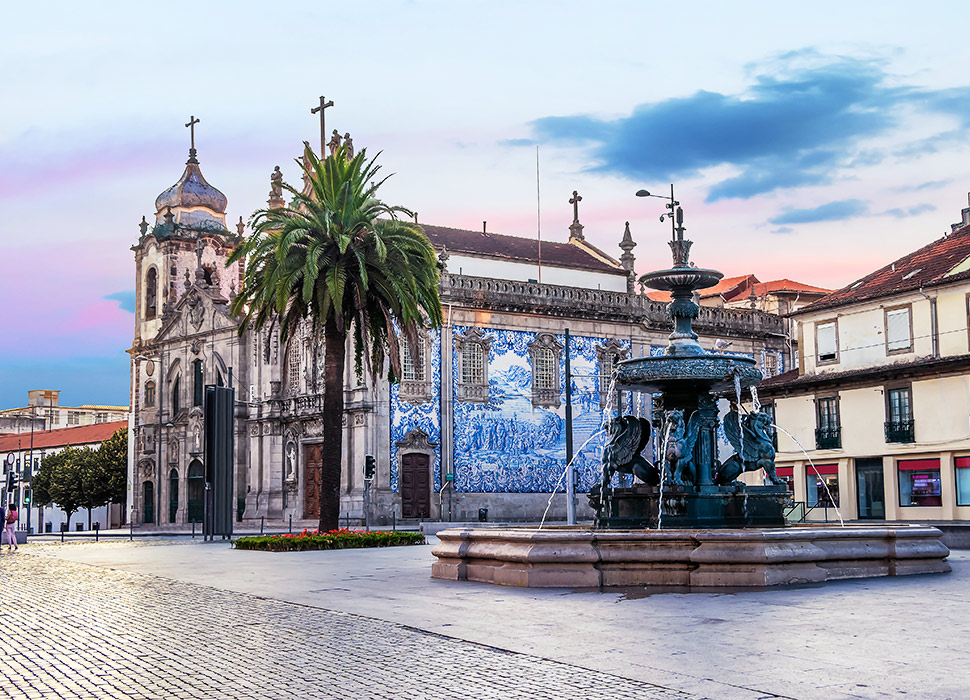 Portuguese folk love covering buildings in tiles, or ‘azulejos’ (it's from the Arabic 'al-zulaich' meaning ‘polished stone’). It’s said the tradition was borrowed from the Moors, who borrowed it from the Persians, who nicked it from the Romans. More recently, they were manufactured by the Dutch. Anyway, they’re everywhere and they’re lovely – nowhere more so than the façade of Igreja de Carmo, which is separated from another church (Igreja dos Carmelitas) by a metre-wide house installed deliberately to stop naughty monks fraternising with frisky nuns next door. Heavens above. 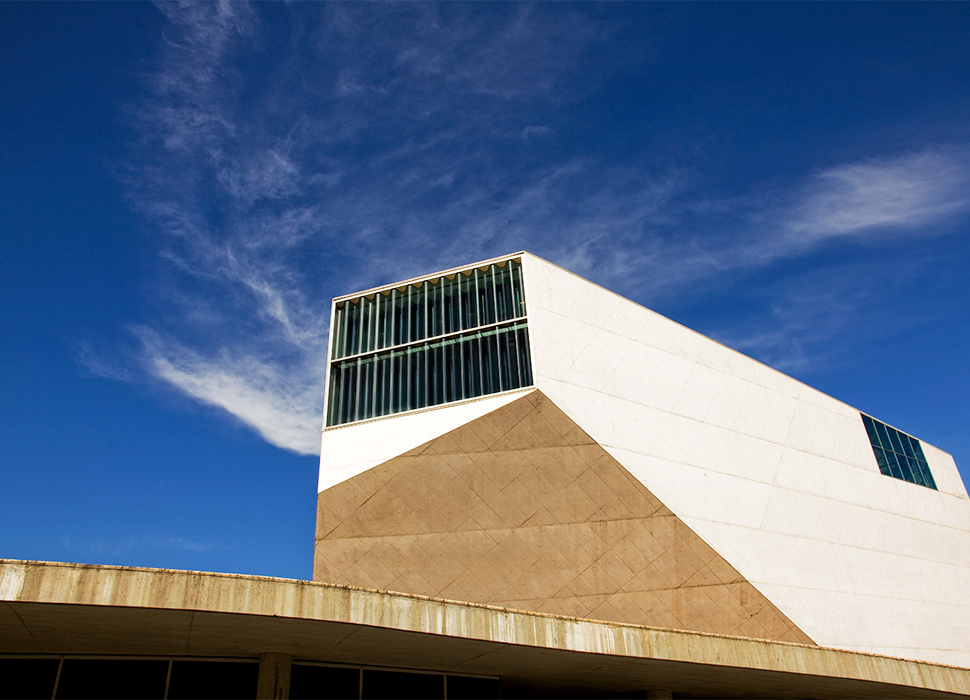 Groovy architect Rem Koolhaas was commissioned to knock up the first centre in Portugal to be wholly dedicated to music (performing, teaching, preserving), inaugurated in honour of Porto’s status as a European Capital of Culture. Imaginatively dispensing with the typical shoebox shape of similar venues, Casa da Música has an agreeably over-stuffed quality, as if straining to contain all the melodious magic inside. Home to the Orquestra Nacional do Porto, it’s open for regular guided tours – look out for the azulejo-decorated VIP bit, with tiles sourced from Koolhaas’s native Netherlands.

9. Get framed at Ó! Galeria 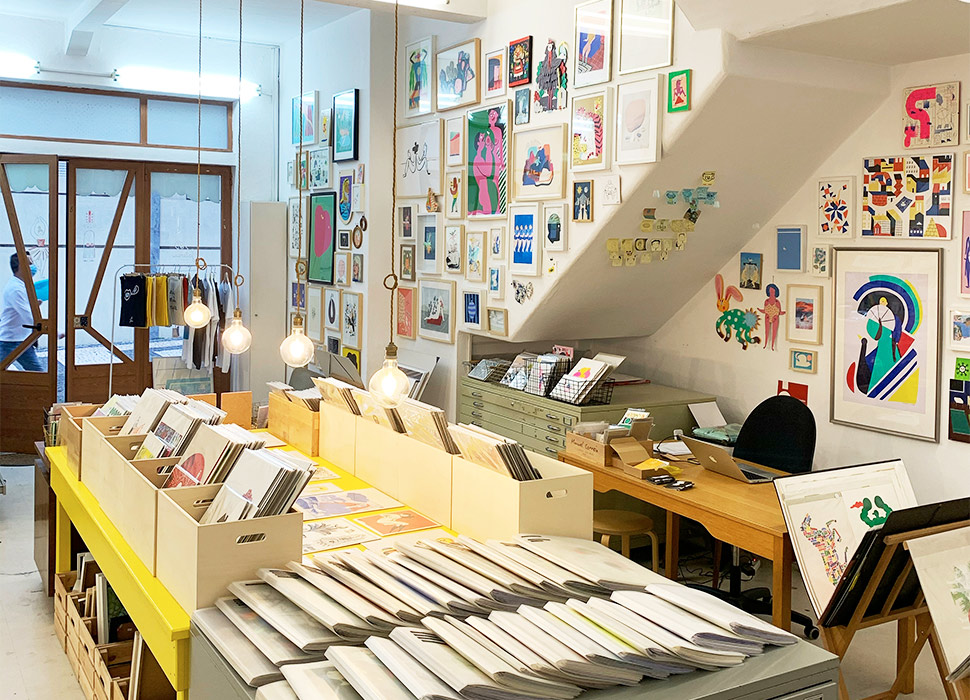 Porto is an especially stylish city, and as such you should aim to go home with an especially stylish souvenir. You won’t do better than the eye-catching wares at Ó! Galeria. A dinky little artist-run boutique, the idea is to showcase the best of Portuguese (plus a smattering of international) illustrators. Expect plenty of bold, block colours and a cheery mishmash of styles. If you’re worried about fitting a frame in your hand luggage, don’t – it also sells sweet T-shirts and illustrated knick-knacks. Swing by for yourself and see why Ó! Galeria is such a consistently popular draw.

Make yourself at home in Plano B – a converted, traditional Portuguese townhouse complete with antique furniture, saucy statues and nifty concept lighting throughout. By day the ground floor is serves as a very respectable coffee spot and art gallery. By night the larger room is given over to live acts, the other to big DJ talent – Jamie XX has played here, as has Peaches. And when you’re really ready to get down, the basement is widely regarded as the best nightclub in town. Literally the coolest house party you’ve ever been to.