Portugal's entrancing capital is an engaging hotbed of history, cutting-edge culture, cracking custard tarts and more. Here's our pick of the best of it

1. Satisfy your sweet tooth with a pastel de nata 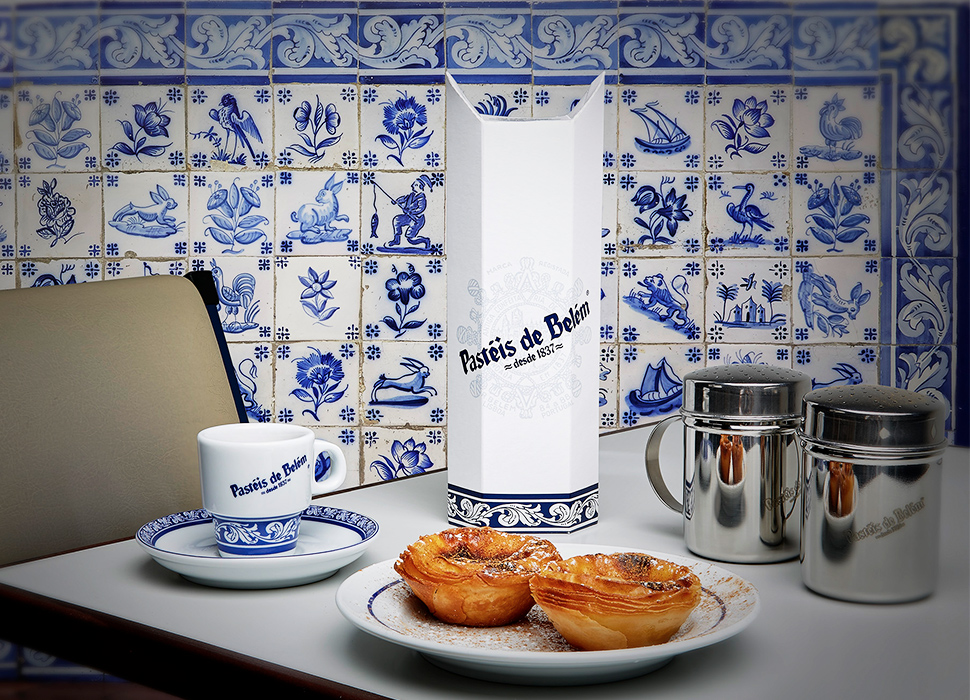 The pocket-sized pastel de nata is one of Lisbon’s star attractions; a crispy, creamy, custardy tart that melts in your mouth, first created by monks over 300 years ago. For a taste of where it all began, head to Pastéis de Belém, whose killer recipe remains a secret. Elsewhere, enjoy a freshly baked pastel de nata from one of the city’s two Manteigaria bakeries, including Chiado’s late-night spot. There are various places now also serving vegan and gluten-free options.

2. Take a breath in the ‘lungs of Lisbon’ 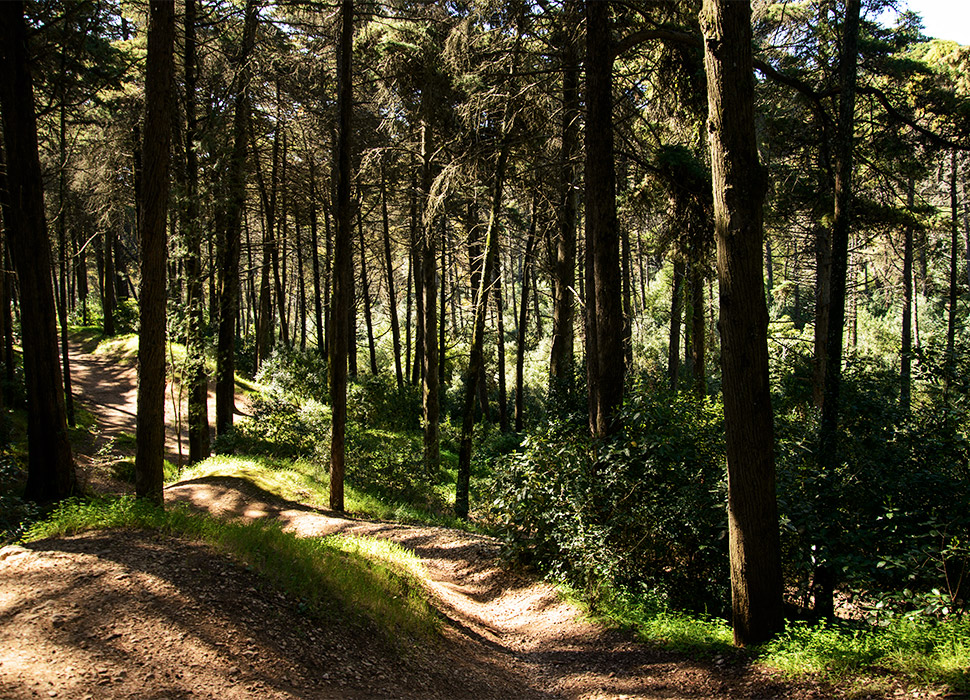 For sweeping panoramic views of Lisbon and nearly 1,000 hectares of lush forest, head to the largest green space in the city – Monsanto park. Teeming with diverse plant and animal life, from oaks to owls and rabbits, Europe’s largest urban forest park is the perfect place for a picnic or a stroll, and is accessible by foot or bike via the city’s ‘green corridor’. Check out the 360-degree viewpoint deep in the heart of the forest, or relax at the serene Monsanto Open Air or Monte Verde restaurants.

3. Catch the city's colours from a miradouro 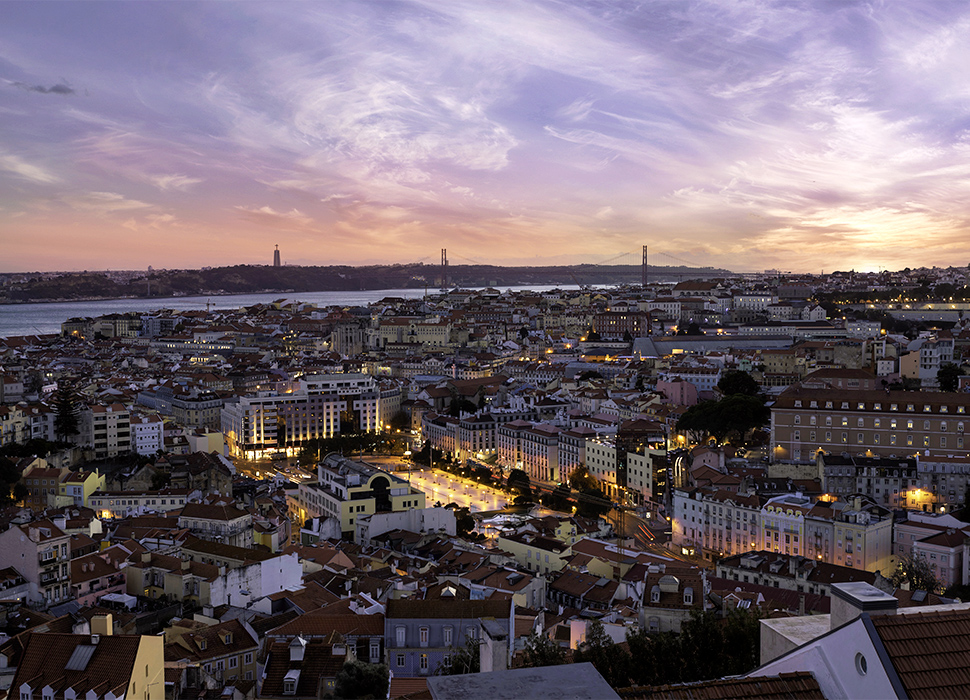 You'll get quite the eyeful at Miradouro da Graca / Image: Adobe Stock

With its pastel pinks, electric blues, bright whites and sunshine yellows, Lisbon is bursting with colour. The light in the city is inspiring and unique, so visitors should revel in the romance of a Lisbon sunset (and score big on Instagram) at one of the dozens of miradouros. Dotted around town, these scenic viewpoints are the perfect place to enjoy a drink and gaze lovingly at the horizon. The Miradouro da Graça is one of the most popular, but it's equally worth opting for the grassy Jardim do Torel.

4. Pig out on a Portuguese sandwich 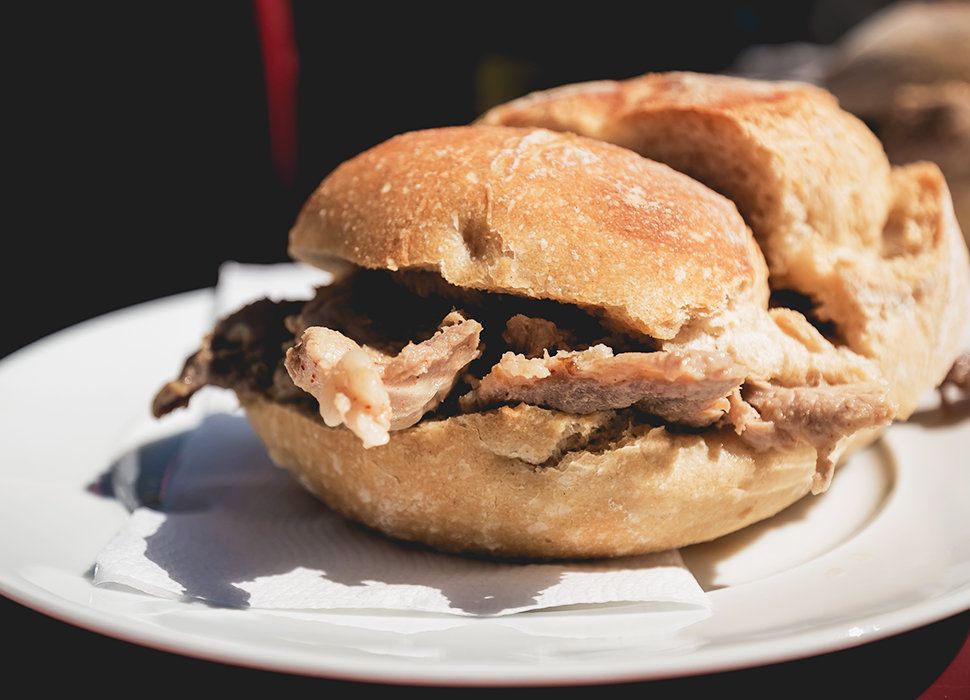 A good sandwich is one of life’s simple pleasures and Lisbon knows how to do it properly. Considered one of Portugal’s premier snacks, the bifana – a crusty bread roll filled with marinated pork – is a cheap and satisfying bite for any meat-eater. Enjoy what the late chef Anthony Bourdain once described as “hot porky love” at O Trevo, or head to local gem Parreirinha do Chile, where the fish sandwiches are pretty decent too. At Galeto or Cervejaria Ramiro pick up a prego – a garlicky slice of steak traditionally inside an airy papo seco roll.

5. Amble the tile-adorned streets of Alfama 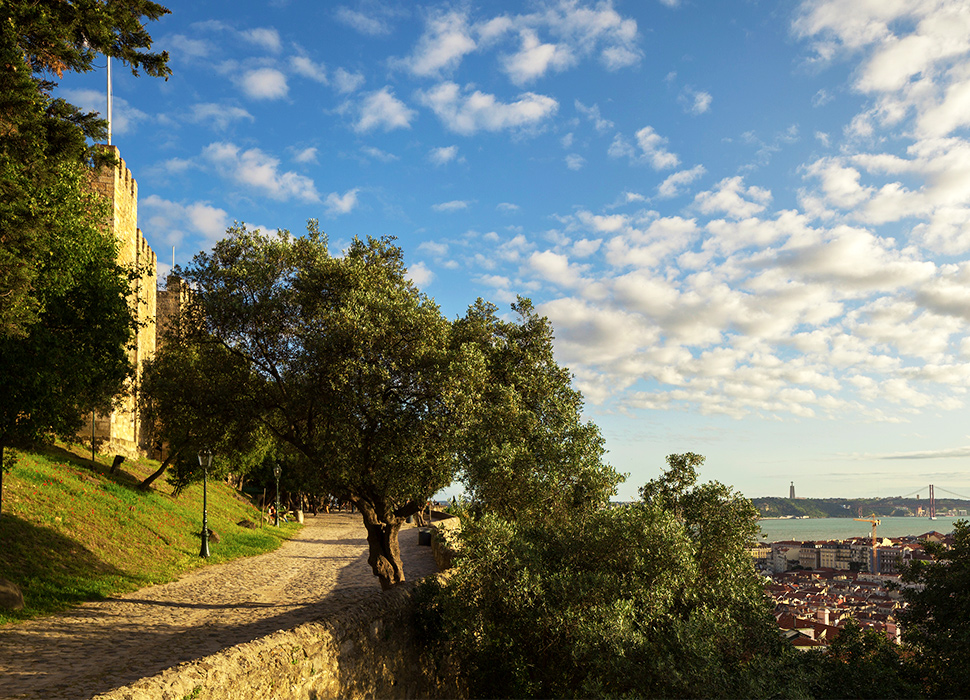 Magnificently peering down on Lisbon from its historical hilltop perch in Santa Maria Maior, the Castelo de São Jorge is an iconic city monument that illuminates the skyline at night. Set aside half a day to explore the castle’s 11 towers, then drink in the views and roam the grounds with the resident peacocks. In the afternoon, why not take an amble through the narrow winding streets of hilly Alfama? It's Lisbon’s oldest neighbourhood – left relatively unscathed after the 1755 earthquake – with plenty to eat, drink, hear and see along the (highly atmospheric) way.

6. Take a day trip to Sintra 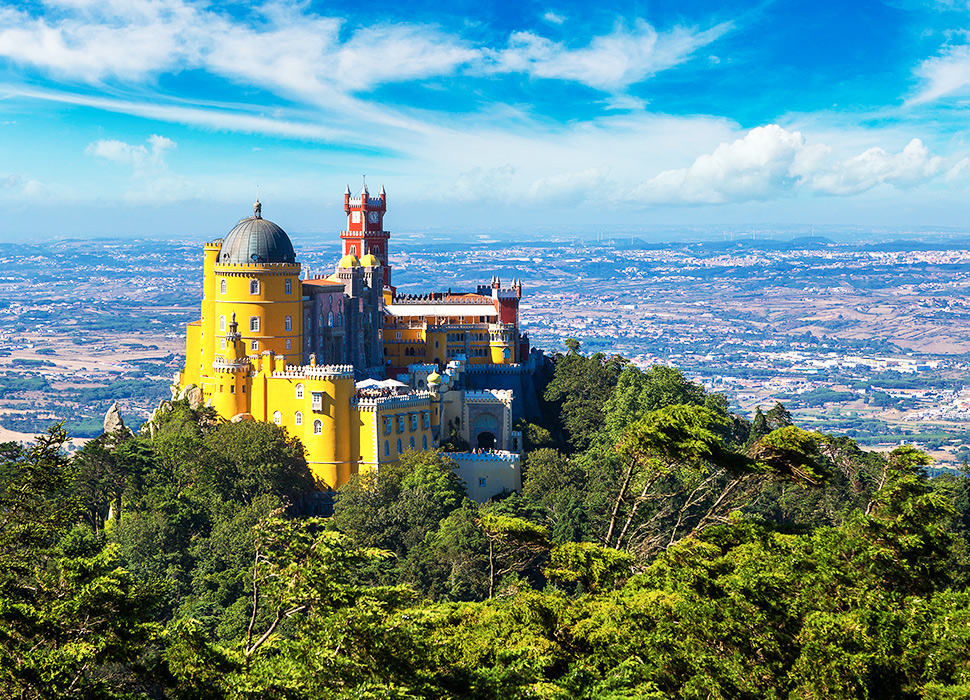 A 40-minute train ride from Lisbon whisks you away to the enchanting town and UNESCO World Heritage Site of Sintra, where you’ll find everything from fantastical palaces to unspoilt beaches (and, er, a mansion reportedly owned by Madonna). Sitting high up on a peak in the Serra de Sintra, the magical Pena Palace is a stunning testament to 19th-century romanticism, while the Sintra-Cascais Natural Park offers hiking trails and a breathtaking coastline that features continental Europe’s westernmost point.

7. Soak up some cutting-edge culture at MAAT 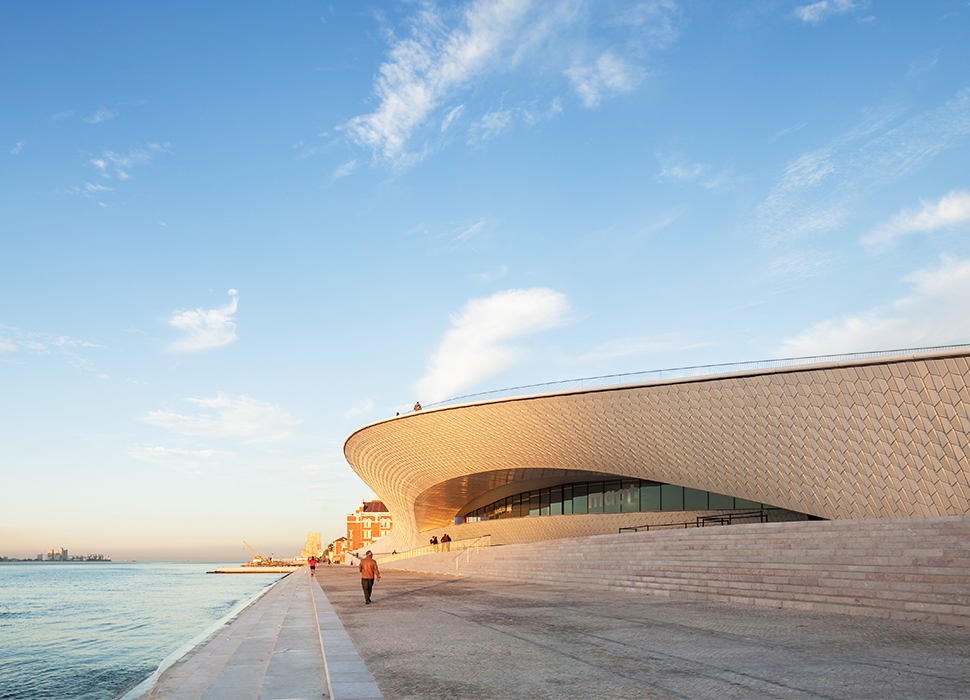 Lisbon’s Museum of Art, Architecture and Technology (MAAT) has been feeding the city a cutting-edge diet of talks, performances, exhibitions and events since opening in 2016. Overlooking the river Tagus, the impressive building was designed by British architect Amanda Levete and boasts a walkable rooftop terrace, waterside promenade and 15,000 white 3D ceramic tiles that cut a spaceship-like figure against the bright blue sky. It's home to visual installations, permanent exhibitions and much more, so there’s something engaging guaranteed to be happening no matter when.

8. Pop your cherry at a ginjinha booth 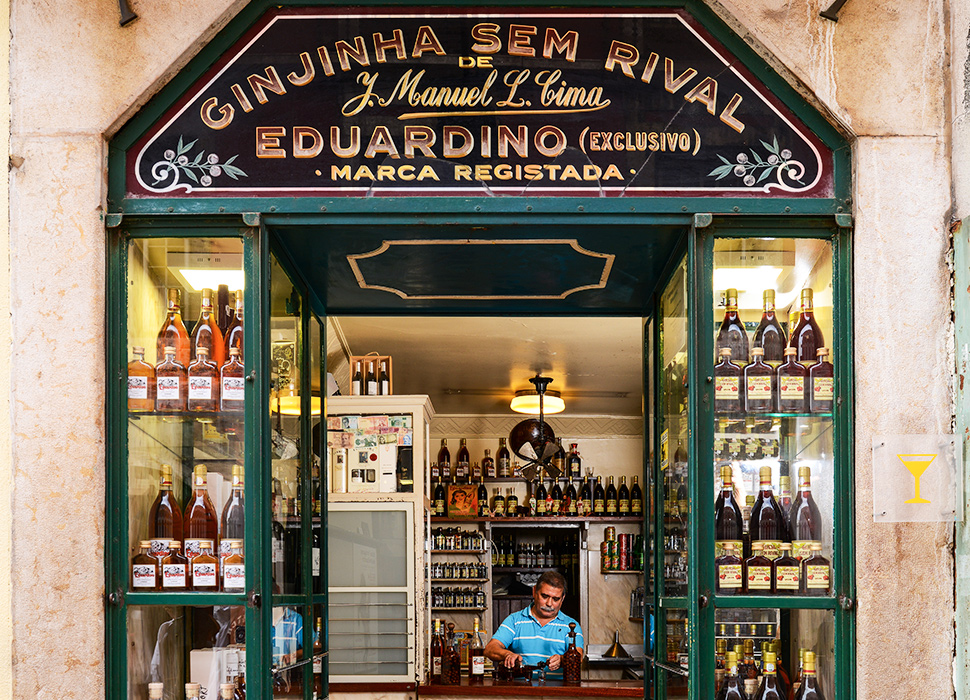 Propping up the bar at Ginjinha Sem Rival

Taking the term ‘watering hole’ to a new level, Rossio’s A Ginjinha is the tiniest drinking den in Lisbon – literally a hole in a wall with a folding bar. Stop here to get served a shot of the Portuguese sour cherry liqueur known as ginjinha (or ginja) and loiter with the locals. Sound a hoot? Pop over the road to Ginjinha Sem Rival and do it all over again. The production of ginjinha can be traced back to 17th-century Portuguese monks (it's always the quiet ones), and can be found in myriad taverns and kiosks across the city.

9. Wind through the streets on Tram 28 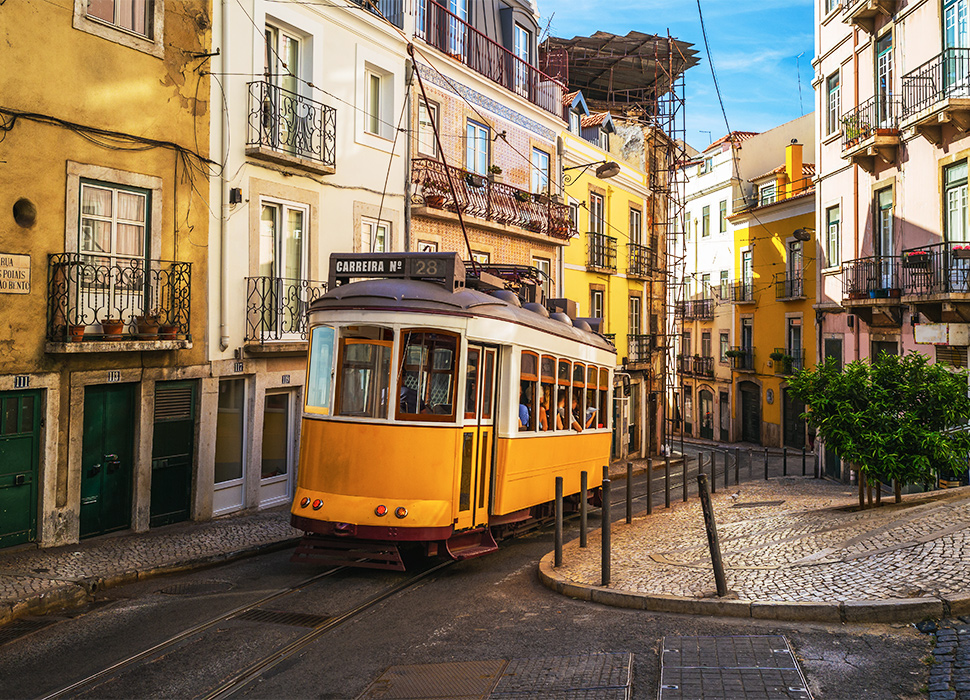 It’s hard to imagine Lisbon without its bright yellow Remodelado streetcars, which trundle along the curvy streets and up the steep hills. Originally commissioned in the 1930s and restored in the 1990s, the Number 28 connects Martim Moniz with Campo de Ourique and takes in must-see sites like Alfama and the Church of São Vicente de Fora. It’s worth purchasing a 24-hour public transport ticket (which includes the metro and all tram and bus services) – that way, the city’s your oyster.

10. Pedal along the river to Bélem 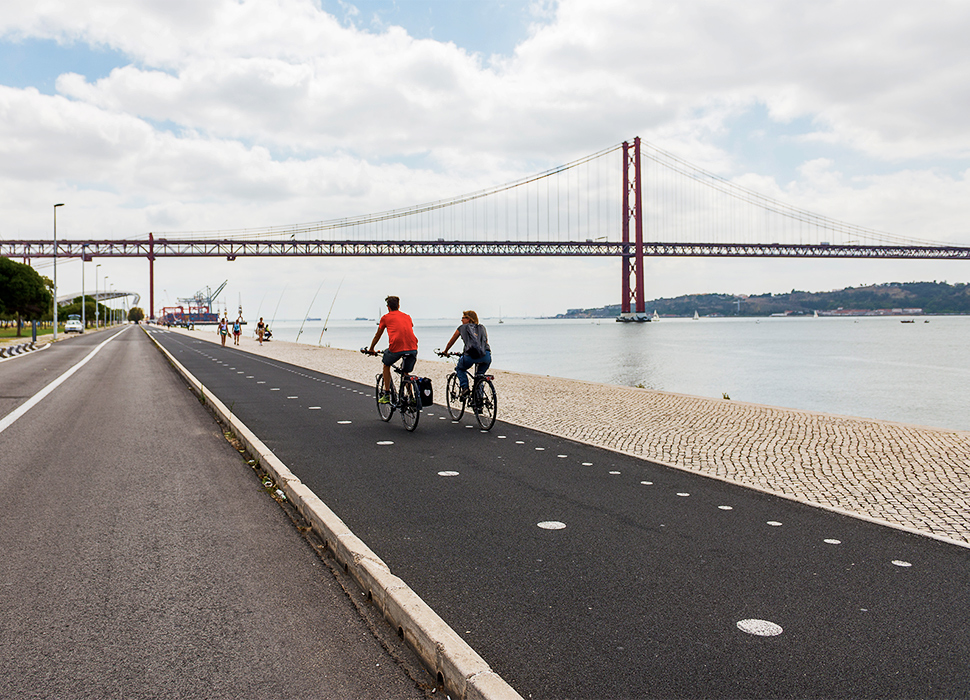 Cycling along the riverfront is one of the best ways to see Lisbon in all its watery glory (and unlike the glory of ginja, this one's good for you). Hop on an electric-assisted rental bike from Cais do Sodré and whizz along the easy-to-follow cycle path, past the container port and up to Bélem. It’s flat all the way, but be prepared for a few teeth-chattering cobbles. Then dismount and discover some of the city’s most iconic riverside landmarks, including the 16th-century Bélem tower and the opulent Jerónimos Monastery, birthplace of the pastel de nata. Oh look – we've come full circle.