Surveying the swell at Praia do Amado / Image: Adobe Stock

The most radical surf beaches in the Algarve

Whether you can hang ten or barely hang on to your beginner's softboard, the beaches of Portugal's southernmost reaches are a mecca for surfers. Here are the gnarliest

Surveying the swell at Praia do Amado / Image: Adobe Stock 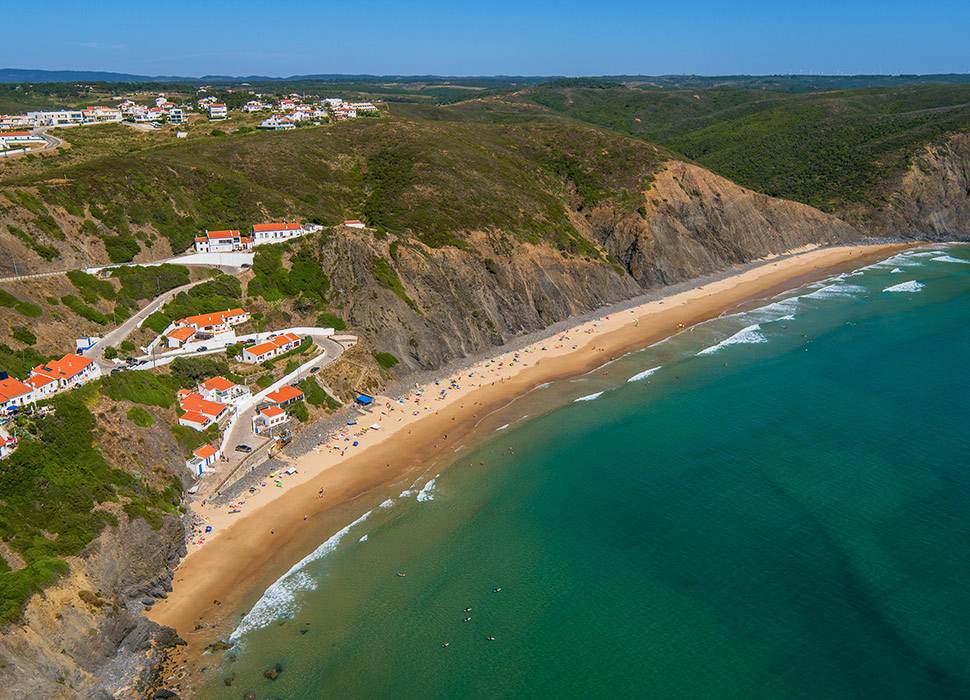 Likely the most popular surf beach in the Algarve, Arrifana is totally worthy of its due: its beauty helps, of course, but it’s also easy to reach, there’s a pretty reliable, year-round swell along the entire length of the praia and the sandy-bottom break works well for beginners. Meanwhile, Kangaroo Point at the northern tip is popular with advanced surfers. The downer? It's bound to be hella busy in summer. Still, as an all-rounder, it takes some beating. 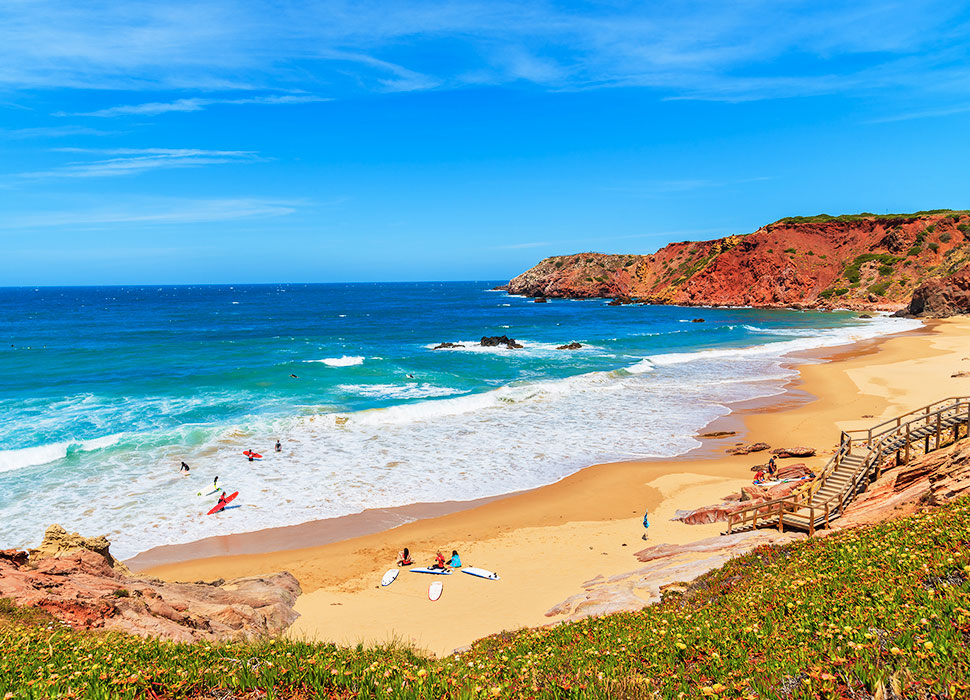 Close to Carrapateira, the gorgeous Praia do Amado is part of the wild, rugged Costa Vicentina Parque Natural and is doubly popular with surfers for its north-west-facing bay, which means dependable swells most of the year. It’s no secret, though; it's been used to hold surf competitions, and you can expect a crowd in July and August. Still, at 1km in length, it’s possible to find your own space. For newbs, the friendly Amado Surf Camp runs classes here. 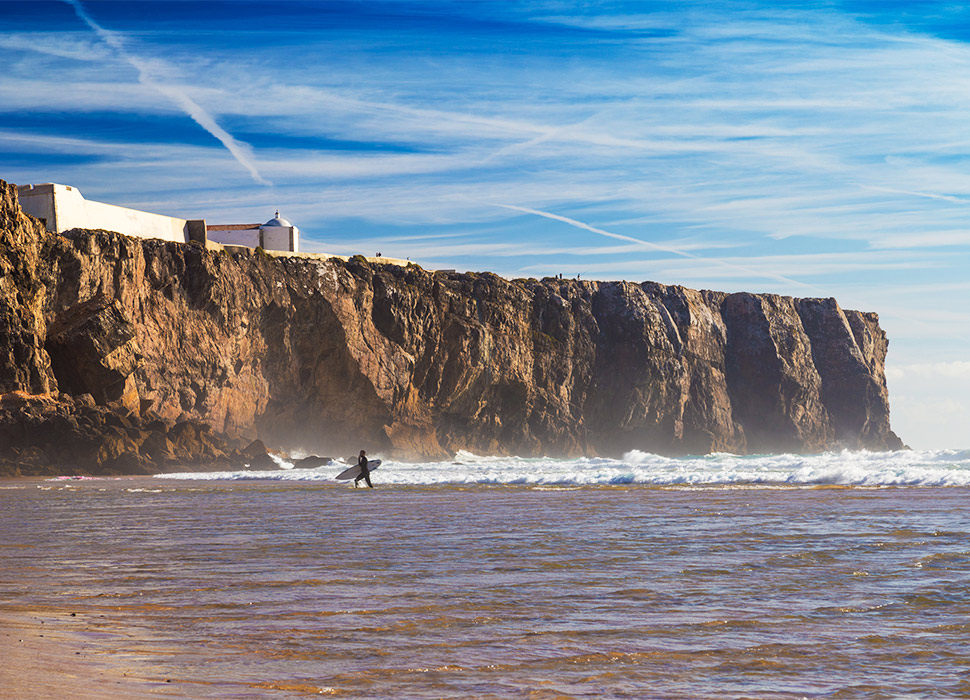 Just outside Sagres, this beautiful, golden stretch of sand has a split personality: in summer, the beach breaks are generally OK for beginners but, be warned, the swell can change and the waves can get seriously big. There are also some gnarly rocks to be aware of, too. Even so, intermediate surfers come here to surf the rips caused by the giant crag in the middle of the beach. Either way, everyone finishes the day with a cold beer at the very cool beach shack by the entrance. 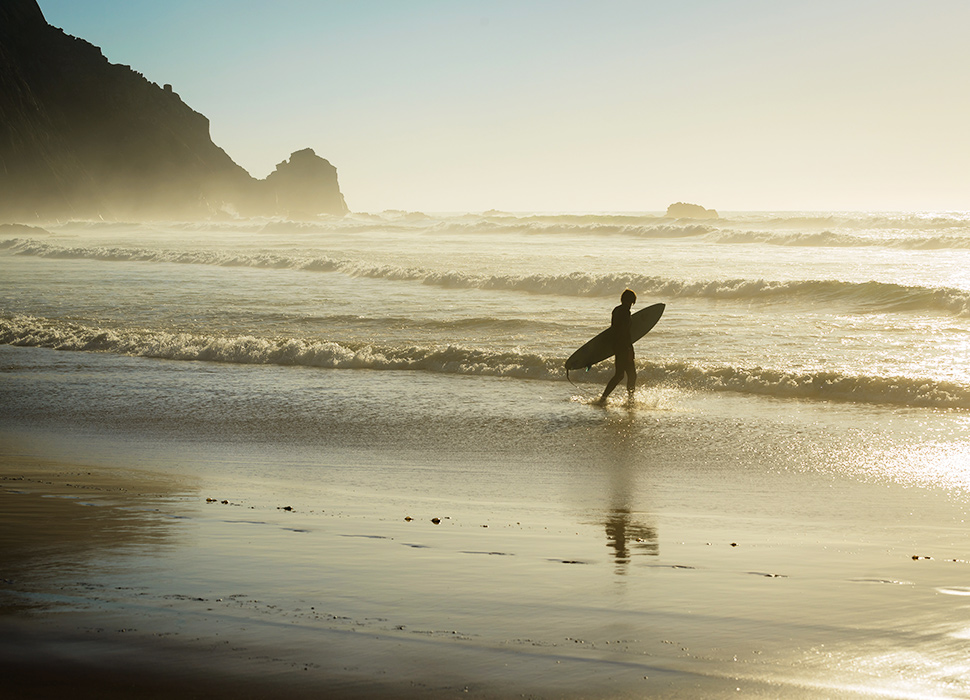 A haze descends at Praia do Castelejo / Image: Adobe Stock

If you’re lucky, the thumping Atlantic swell will cause a fine, salty mist to add to the mystique of this wild, supremely beautiful beach on the Algarve’s west coast. In summer, lifeguards keep watch but, even so, for surfers, conditions can change drastically here – so if you’re starting out, don’t take any risks. Otherwise, the west-northwest facing bay means regular swell even in summer (though be careful of rocks at high tide). Oh, and that sunset? Possibly the most spectacular in Europe. 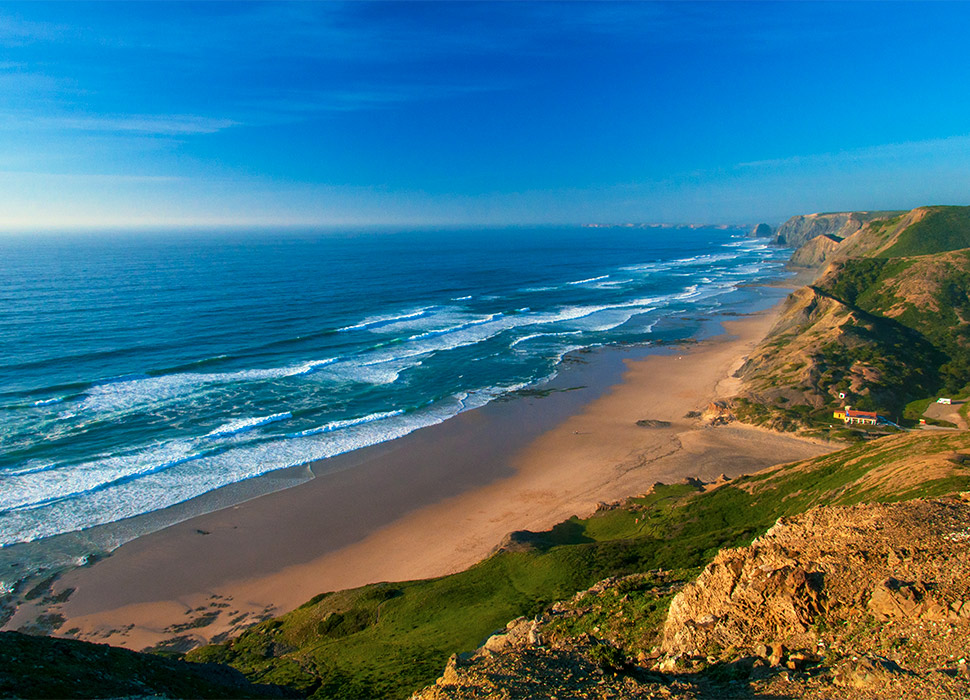 Looking down on the chilly waters of Praia do Cordoama / Image: © Algarve Tourism Bureau

Another popular beach with the local, in-the-know wetsuit set is close to the town of Vila do Bispo and is part of the totally untouched Costa Vicentina Parque Natural. And it’s an absolute stunner. Wave-wise, it’s a mixed bag, but beginners should get their names down at the Freeride Surf School, and there are some super-charged swells for serious surfers. In any case, the water tends to be chilly; a wetsuit is probably a good idea. Finish with a stroll to Miradouro do Castelejo, a cliff-top viewpoint overlooking the bay. 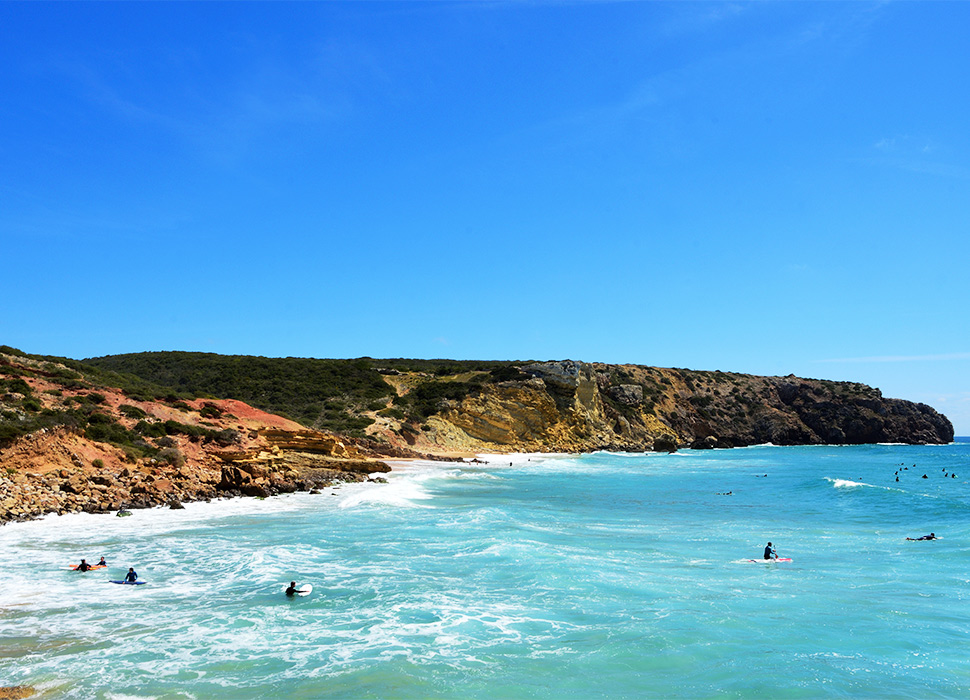 Head to one of Sagres's surf schools before the breaks of Praia do Zavial / Image: Adobe Stock

On the Algarve’s south coast, close to the village of Raposeira, this wild, cliff-backed bay is rarely ever over-crowded and is popular with experienced, in-the-know surfers for its barreling, right-hand point-break at the west end of the beach. The swell in summer can be beginner friendly but, even so, mood swings aren’t uncommon so it probably pays to know what you’re doing here. Or come with a surf school; many of the best are based in nearby Sagres. 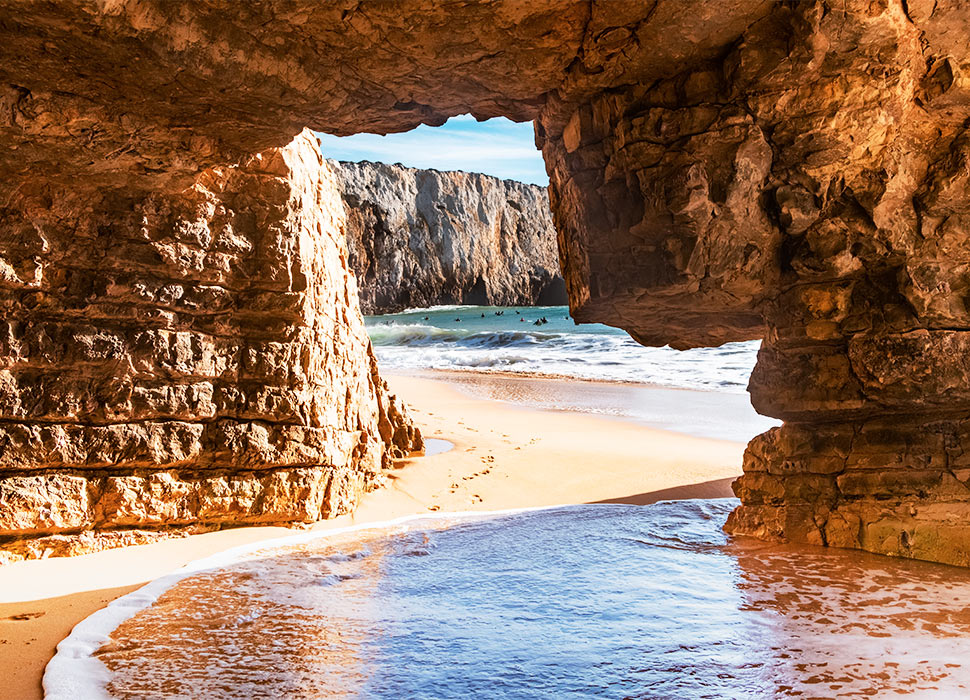 Based in-between Sagres and Cabo da São Vicente, this pretty bay isn’t the easiest to get to (expect a steep descent down the cliffs from the car park) but it draws more experienced surfers who come for the powerful, barrelling waves anyway (they're popular with bodyboarders, too). Still, even in summer the beach is rarely mobbed (those steps!) and there’s a fine spectator seat at the stilted, no-name beach shack-bar that opens in peak season. 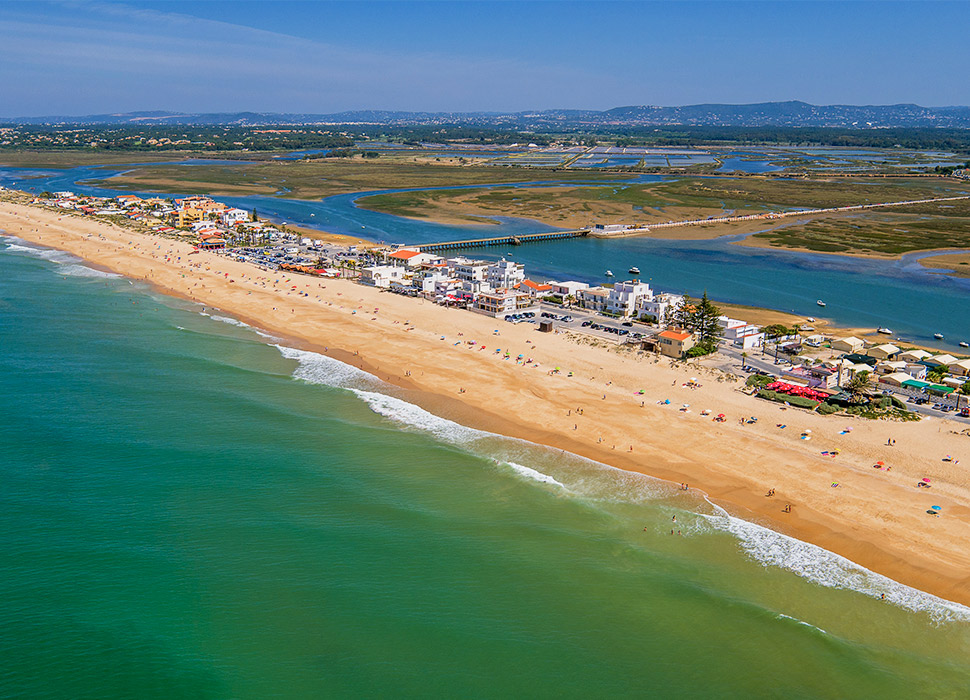 If you’re staying in or close to Algarve’s capital, Faro, well, you’re in luck: you needn't venture too far from town to find decent surf. Set on Ilha de Faro, and reached by footbridge through the Ria Formosa, Praia do Faro offers dependable, beginner-level waves all year and, with a 6km of sand, there’s room to flee from the flock (though nearby restaurants and other amenities keep this beach bustling all summer). Surf Club Faro does lessons for kids here, too.