Benagil Cave, one of the world's most wonderful chambers / Image: © Algarve Tourism Bureau

The best things to do in the Algarve

This super summer holiday staple of southern Portugal is brimming with wicked natural wonders, cultural splendour and cute little marzipan fruits. This is the best of it

Benagil Cave, one of the world's most wonderful chambers / Image: © Algarve Tourism Bureau

1. See the light at Benagil Cave 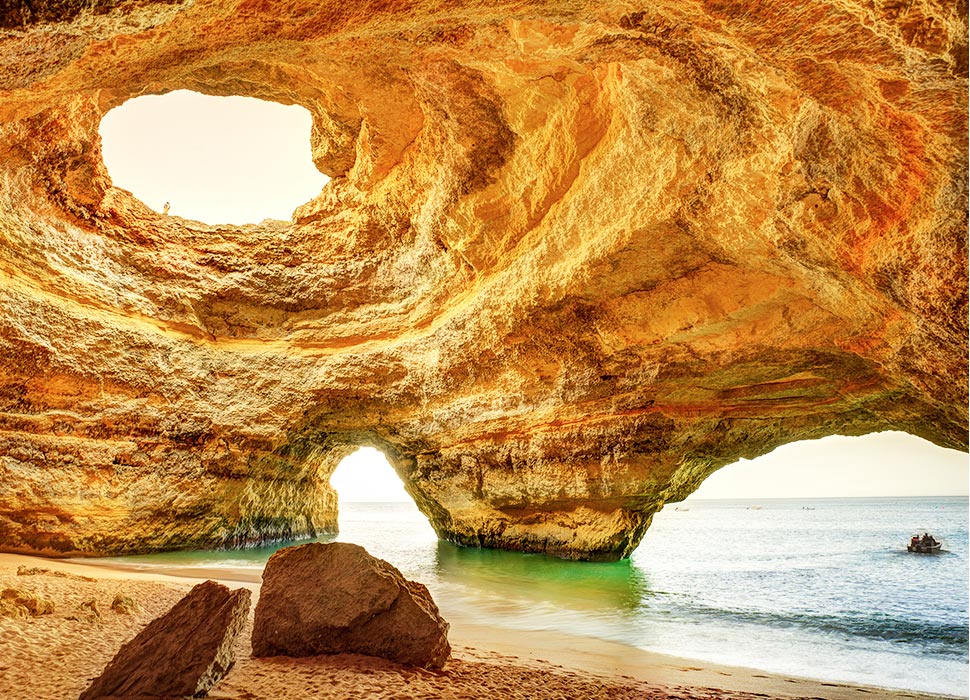 The seaside cave against which all others are judged, Benagil is only accessible by sea so you’ll want to book onto a boat trip, or get on a stand-up paddleboard, or just peer down into the dramatic rooftop hole from up on those neighbouring cliffs. A breathtaking formation of Miocene limestone, it’s being gently eroded by the gently lapping Med as we speak, and could be gone completely in as little as a millennium or so. Best get a wriggle on.

2. Get hooked on the anchor cemetery 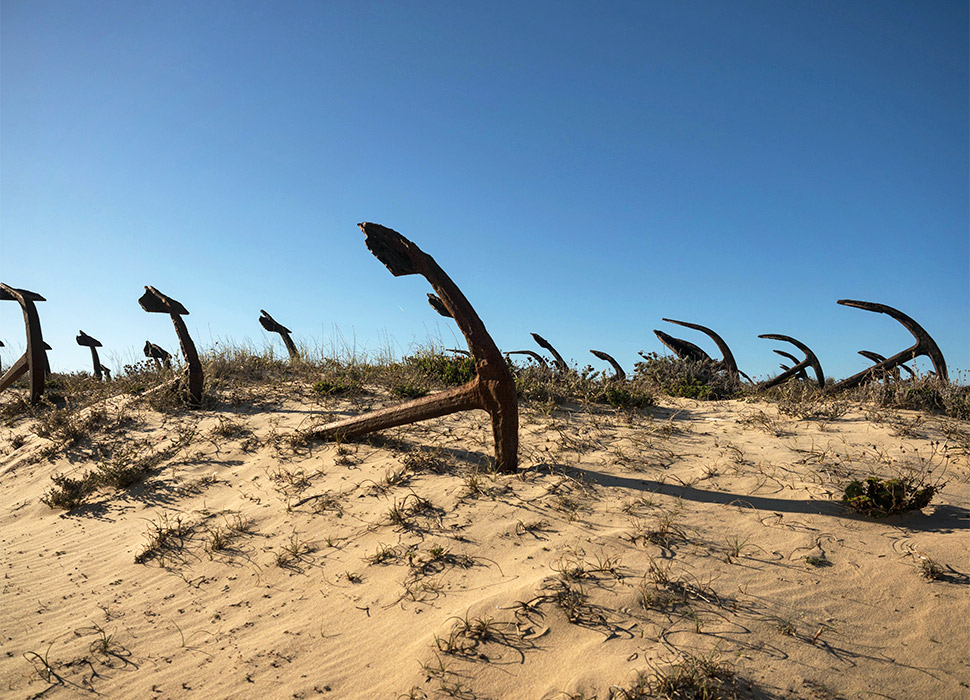 Since Roman times, it’s reckoned, people around these parts made a wholesome living catching tuna using weighted nets. Until the 1960s that is, when modern methods and declining stocks wiped out the industry at a stroke. The Cemitério das Âncoras (anchor cemetery) on Praia do Barril comprises hundreds of rusting anchors, left here partly as a dumping ground, partly as a thought-provoking tribute to the generations of salty tars who worked here. We guarantee you’ll be gripped. 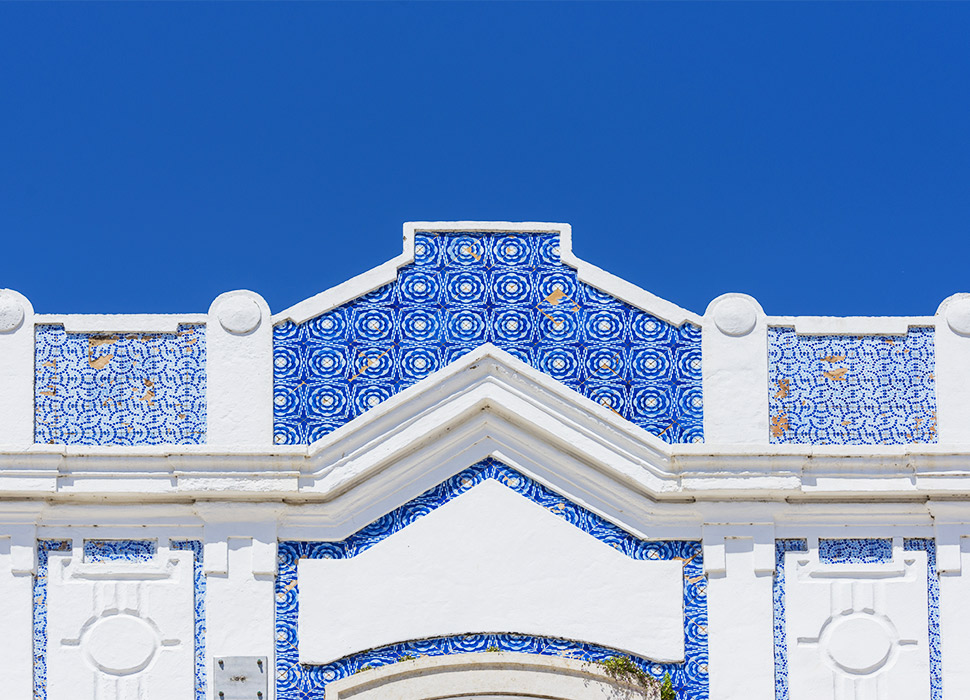 It can be hard to tell where the sky starts in Faro Old Town / Image: Adobe Stock

Faro is every inch the busy modern city, which makes its peaceful Cidad Valha (Old Town) feel all the more precious and serene by comparison. Tread lightly the exquisite pavement mosaics, known locally as ‘calçada portuguesa’, and enjoy the quaint ranks of whitewashed homes with terracotta rooftops, which have remained essentially unchanged in generations. For the ultimate old-school experience, approach it as seafaring folk once did though the imposing, neoclassical Arqo da Vila, the traditional point of ingress through Faro’s hallowed defensive walls.

Find more things to do in Faro.

4. Return to nature at the Ria Formosa 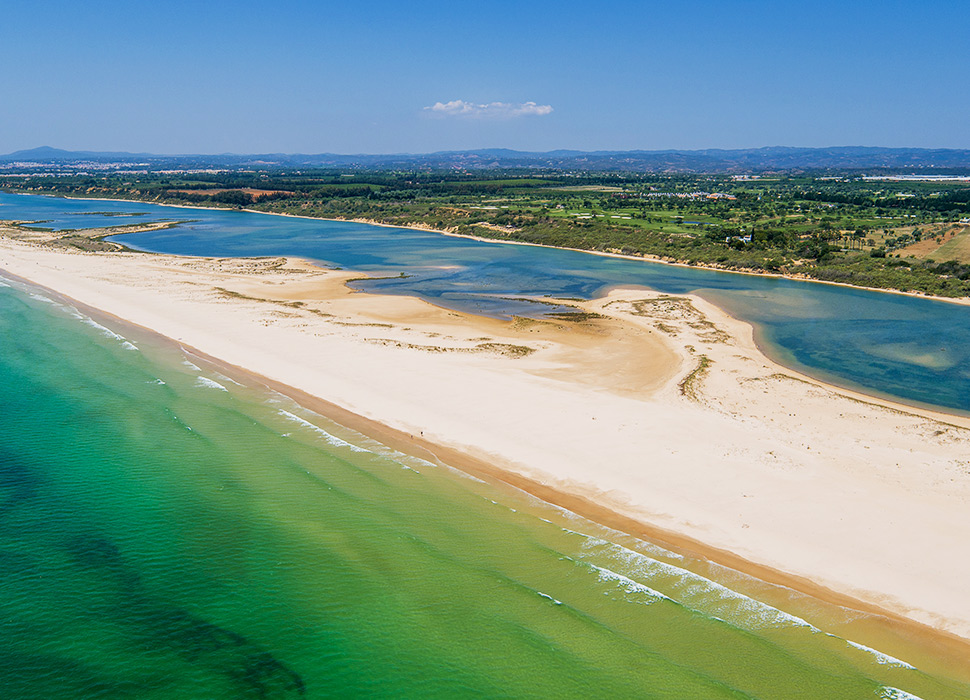 Nice sands, but where are the pooches? / Image: © Algarve Tourism Bureau

A 60km-long national park stretching along Portugal’s pretty southern coastline between the beaches of Garrão and Manta Rota, Ria Formosa is that beguilingly elaborate network of rivulets and canals you see from the plane on the way into Faro airport. Depending on the time of year you’ll see all manner of birds, from flamingos to widgeons, spoonbills and – if you’re lucky – the rare, elaborately crested galinha-sultana (‘sultan hen’). You might even spot one of the area's adorable Portuguese water dogs frolicking in the shallow surf. These tousled cuties traditionally helped Algarve fishermen with their trade, and a whole colony was established at Rio Formosa when they were facing extinction in the late 20th century.

5. Dine on doces finos do Algarve 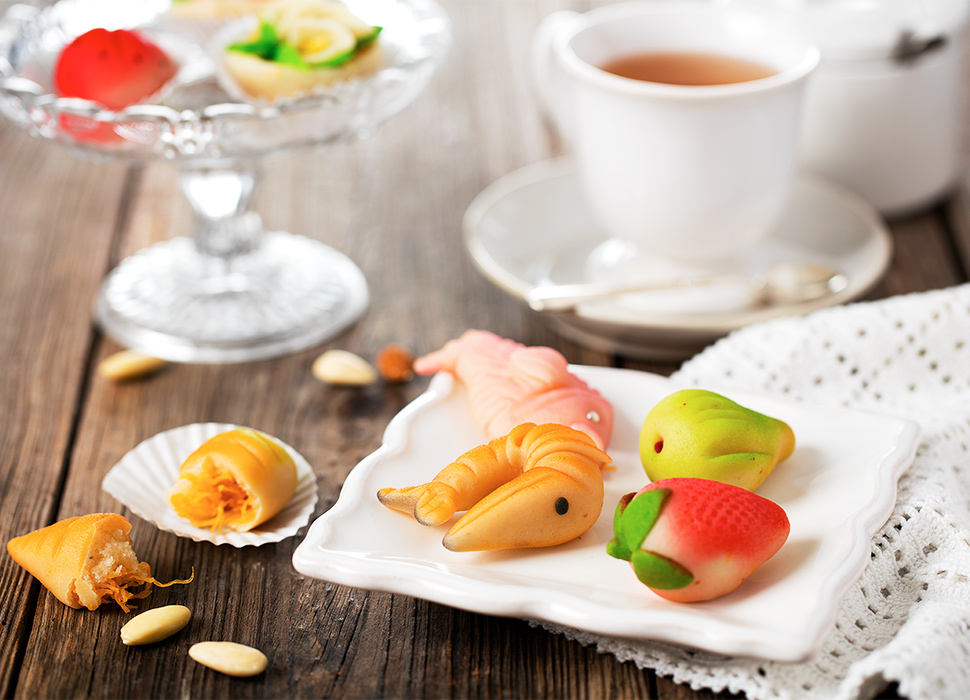 You’ll see these adorable little multicoloured marzipan sweets, often in the shape of fake fruits and vegetable, all over the place in the Algarve. For truly exceptional doces finos that are (almost) too sublime to eat, visit Faro’s Ana Sara Confeitaria (at Urbanização Quinta Dos Arcos) where they're laid out in a mesmerising array of colours. If you’re in Lagos, Bolodoce & Café (at Rua do Moinho do Azeite AP) are grandstanding competition winners in the colourful bonbon stakes. Finally, A Casa da Isabel in Portimão (at 61 Rua Direita) is as cutesy and kid friendly as the doces themselves. 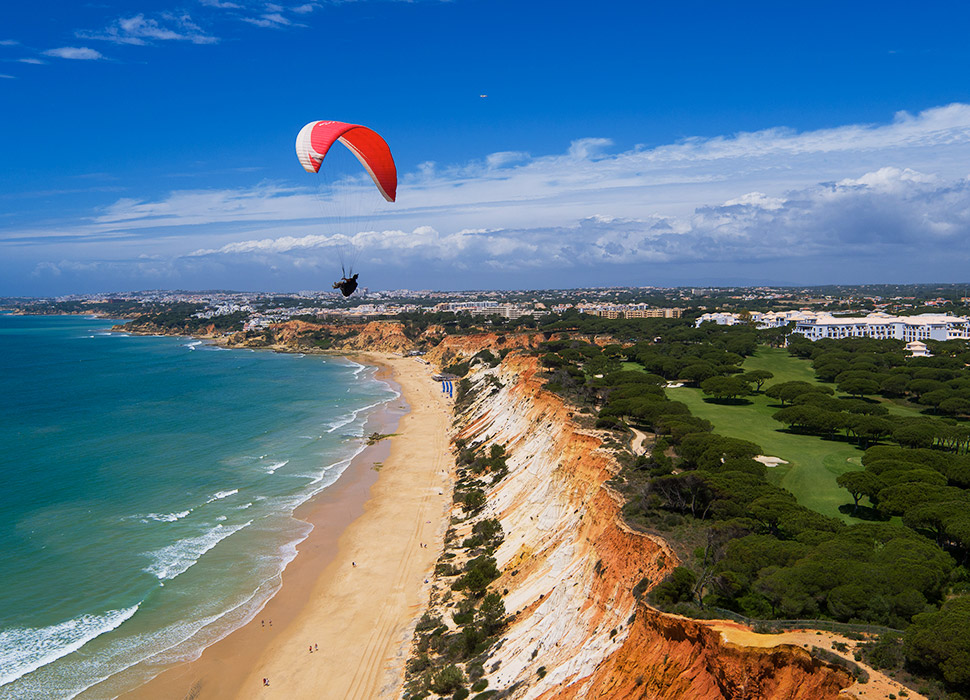 Extending six magnificent kilometres from Vilamoura in the east all the way to Olhos de Água – near Albufeira – in the west, Praia de Falésia is one of the most spectacular beaches you’ll ever visit. The name literally means ‘beach of cliffs’, and no wonder. Soaring rocky drops line one side, turning the beach itself into a disconnected little haven. It’s blue-flag pristine and kid-friendly shallow, especially on the eastern half, and hiking up on the high cliff path is a must when the weather’s swell.

7. Learn about Algarvian history in Lagos 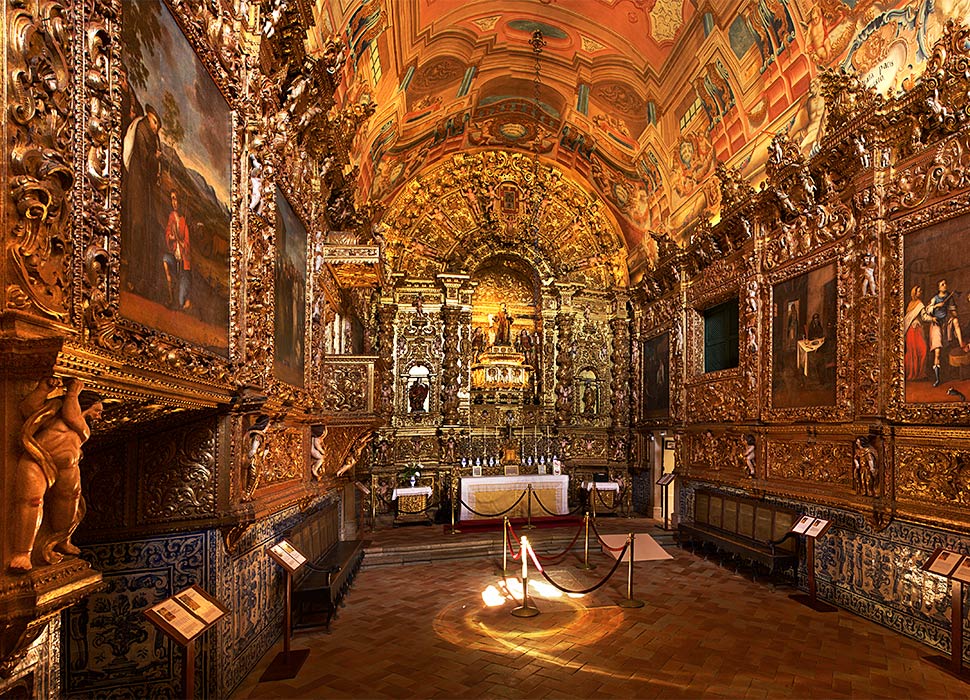 Head to Lagos to immerse yourself in the rich history of the Algarve, from its Neolithic origins through the Roman era, to the great Age Of Discovery when Portugal did so much to shape the modern world. The definitive collection at Museu Municipal Dr. José Formosinho contains countless eye-opening treasures; particularly the robes of boy king Sebastião, who led 17,000 men to their deaths – including his own – on a disastrous invasion of Morocco in 1578. And if that’s a bit heavy, there are lots of pretty tiles to gawp at. 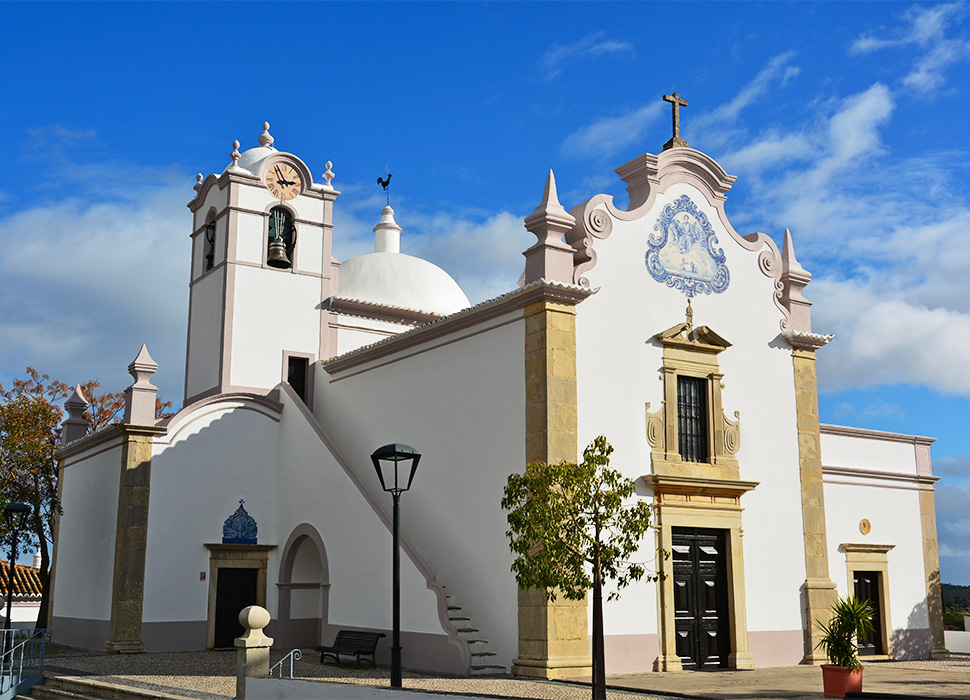 Speaking of pretty tiles, the Church of São Lourenço in Almancil has possibly the most exquisite example of the azulejos form anywhere on earth. Designed by Policarpo de Oliveira Bernardes in 1730, the awesome display depicts the life of São Lourenço (or Saint Lorenzo). In fact the only part of the interior not coated in tiles is the lavish gilt-carved altarpiece in the chancel, attributed to another master craftsman, Manuel Martins, who also contributed the statue of Saint Lorenzo himself. It’s so very extra, in the best possible way.

9. Pass the salt on a mine tour 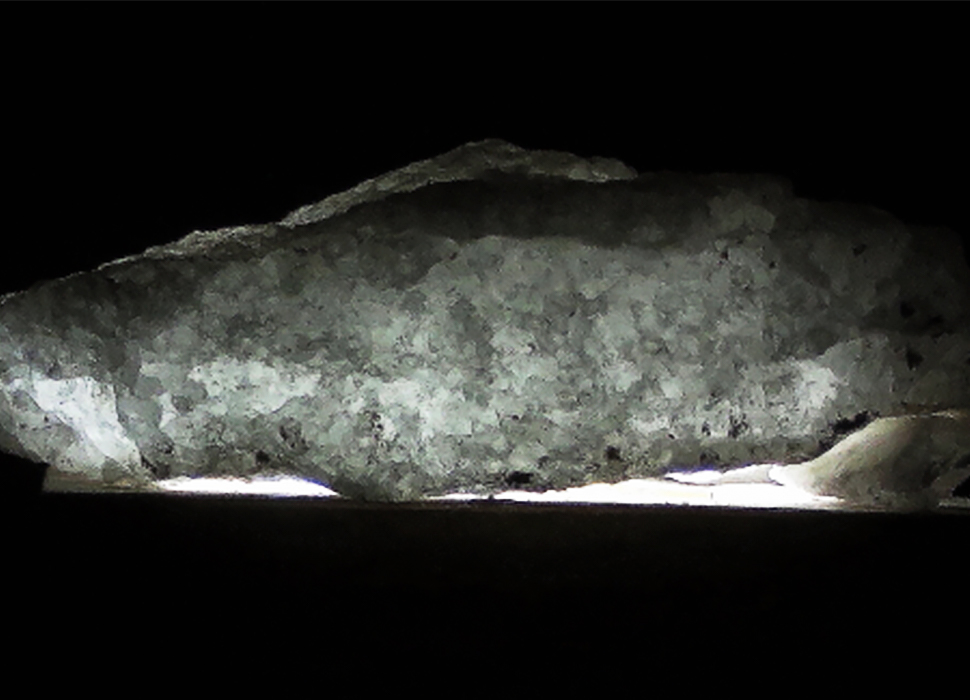 Get down with the locals on this truly unique day trip. The Loulé rock-salt mine invites you to put on a helmet and travel 230m into the bowels of the earth. There, you can walk around man-made galleries of 230-million-year-old rock formations and learn all about the local mining industry. There’s history, engineering and the distinctive thrill of hanging way below sea level. Thanks to its isolation from the world above, the mine maintains low humidity and a temperature of 23ºC. So it’s one of the Algarve’s few entirely non-seasonal attractions (ironically).

10. Head for the hills at Serra de Monchique 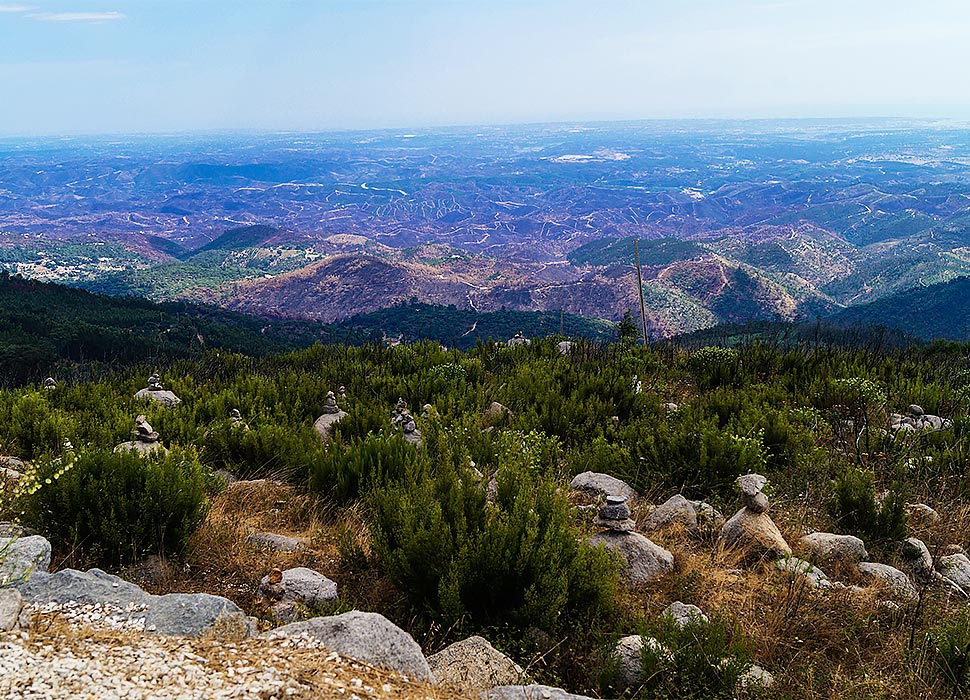 The Algarve is rightly famous for its beaches and caves, but there’s more natural appeal to the region than just that. The interior Serra de Monchique mountain range includes the ravishing summit of Fóia (902m above sea level) which you can scramble up to gaze over the vast pine and eucalyptus forests, and out towards the shining coast. The cutesy town of Monchique itself is sedate and has blessedly been ignored by modernity – just pick a random sloping alley and get lost taking photos of the rising pastel-coloured houses. It might even be the peak of your whole trip.

The best things to do in Faro

Best of the Algarve: the most beautiful beaches near Faro