Amsterdam in winter - a seasonal guide to the Dutch capital

With its cycling-heavy, canal-based culture, Amsterdam is often seen as a summer city. But it comes alive in different ways as the seasons change. Here's how to traverse it at Christmastime

With its labyrinthine canal network, rows of lofty houses, fabled coffee shops and army of cyclists, Amsterdam oozes character – not least in the winter months, when the city is ablaze with fairy lights (and often a dusting of snow), skaters zig-zag along the canals, and the outdoor markets come alive. Oh, and a wealth of hearty Dutch culinary treats (from hot doughnuts to Dutch sausages) offer comfort on chilly days and nights. Here's our guide to it all.

Need to flesh out your itinerary with a few more classic city experiences? Here's our guide to the best things to do in Amsterdam.

You'll want to get your jenever fix and here's where to do it: the best 'brown cafés' in Amsterdam. 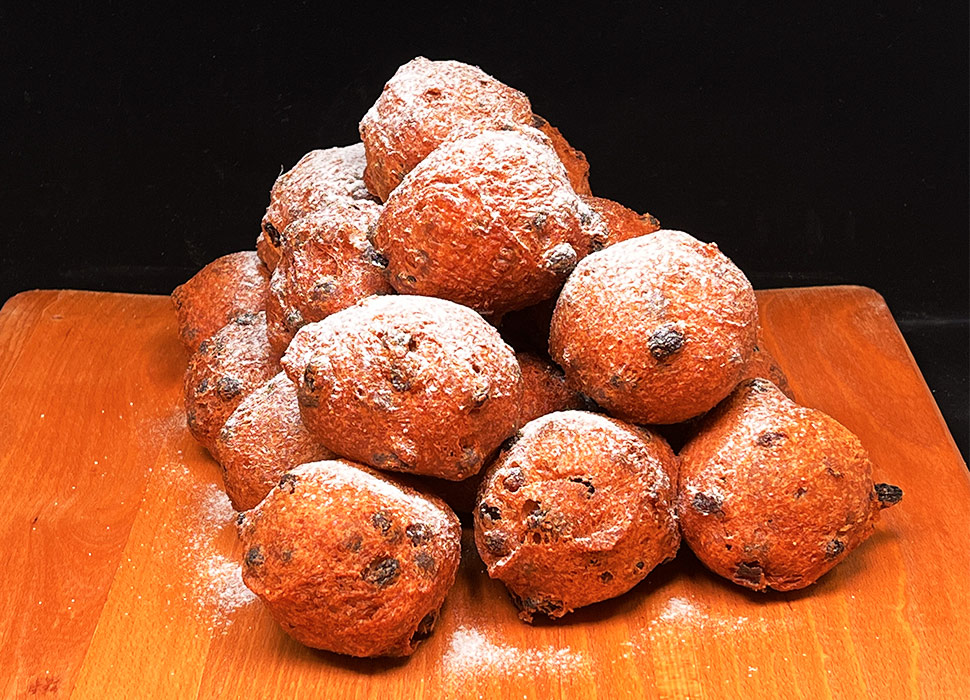 What to eat: Literally translating as ‘oil balls’, oliebollen are much more appetising than they sound. Basically deep-fried dough balls, they are thought to be the inspiration for doughnuts, and are traditionally eaten on New Year’s Eve in Holland. Visit Hartog’s Volkoren on Wibautstraat 77, one of the best bakers knocking out the delicacy, or pick some up from one of several street vendors. Oliebollen will warm your cockles on a Baltic winter’s day. 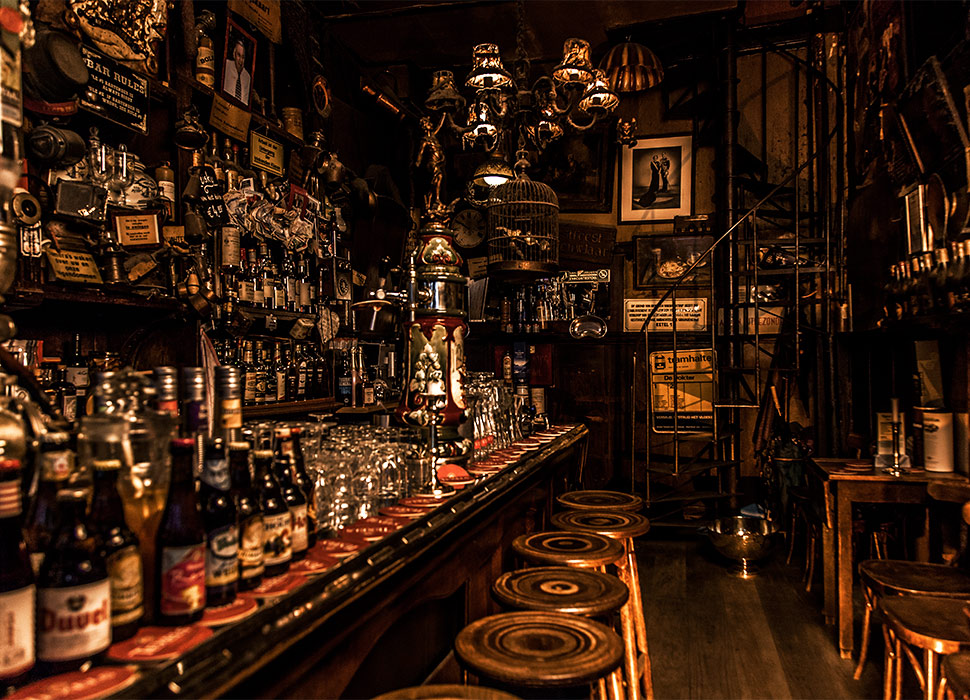 What to drink: Visit Café de Dokter to sample the Dutch spirit jenever. It's widely believed to be the precursor to gin, as well as the inspiration for the phrase ‘Dutch courage’ (British troops fighting Louis XIV reportedly appreciated its calming effects before going into battle). The tiny Dickensian café, hidden down the narrow Rozenboomsteeg alley, is a dark and cosy hideaway where punters shelter from the elements and warm up with a stiff pour to the strains of jazz. 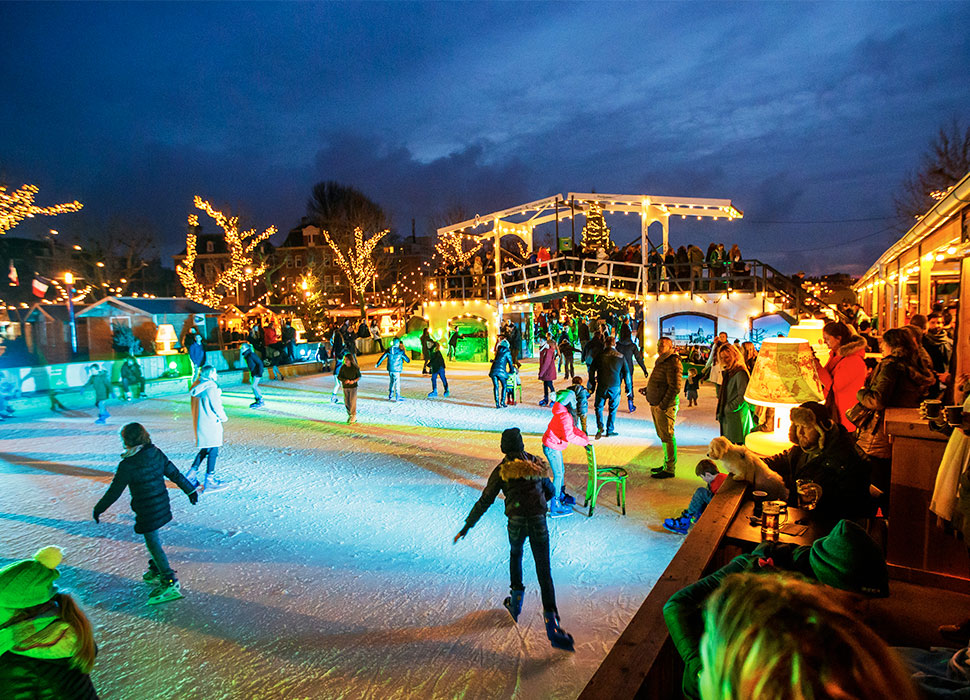 The ice rink at the Winter Festival Amsterdam

Are there any winter festivals? The prosaically named Winter Festival Amsterdam (13 November 'til  30 January) features multiple attractions, from the magical ice rink at the Museumplein to the ice bar, near Rembrandt Square. Chilled to -10°C, this boozy marvel was sculpted from 60 tonnes of natural ice. Don’t miss the jubilee anniversary of this year’s Light Festival (2 December 'til 23 January), when over 20 light sculptures will illuminate the water. 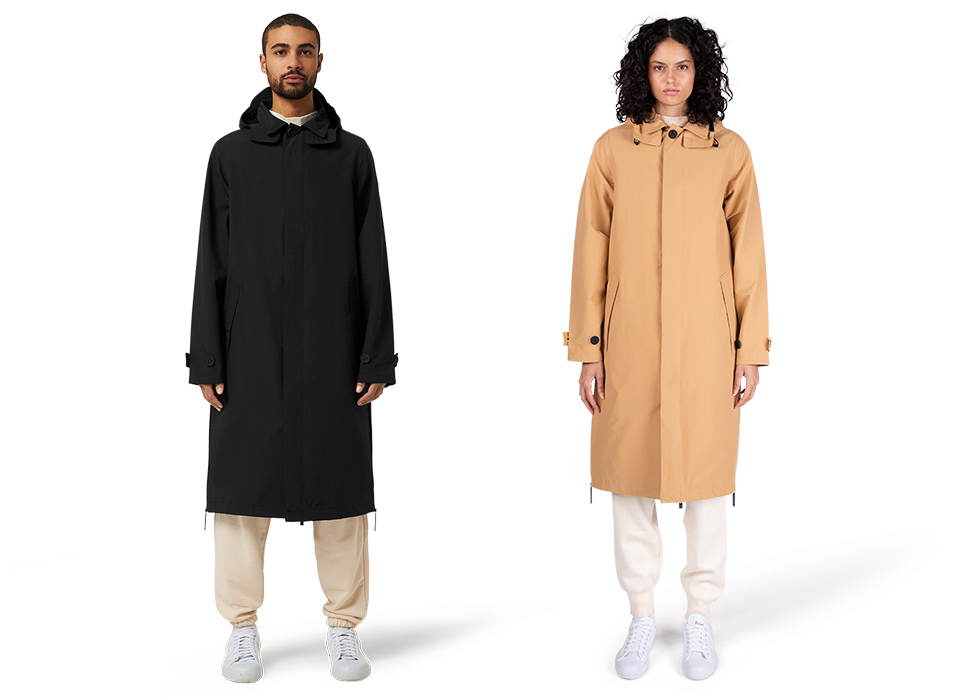 What to wear: Prepare for the rain and cold by treating yourself to a Maium Mac Cycling Raincoat, a long, three-quarter length mackintosh which transforms into a poncho to protect your legs when cycling through Amsterdam’s rain-soaked streets. Not only is it practical and funky, it is designed in Amsterdam (by self-proclaimed bad weather cycling experts) and is made from 88 recycled plastic bottles. 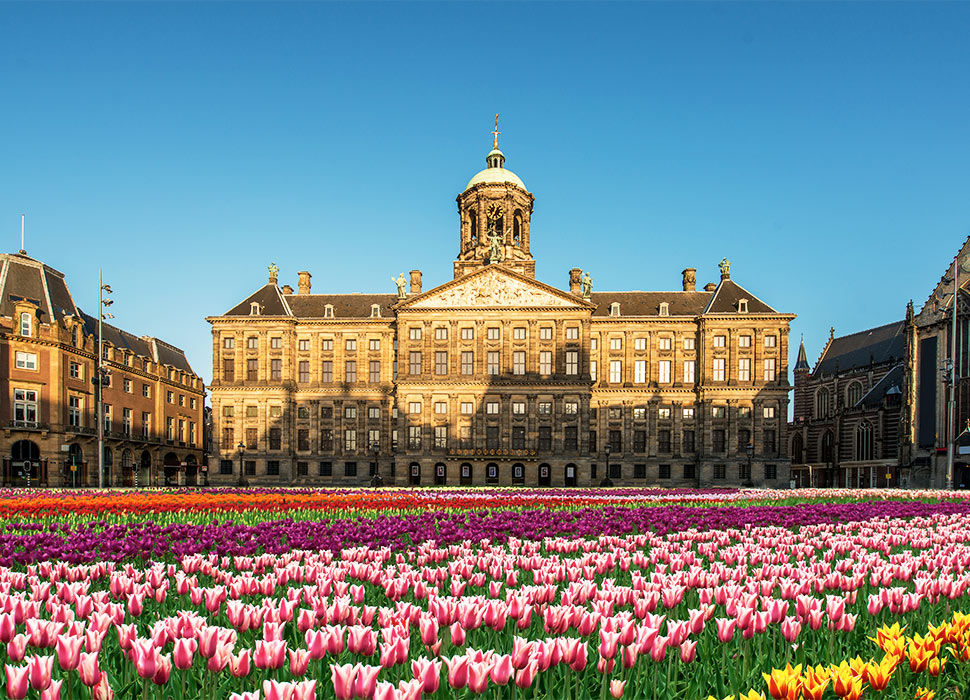 What to see: Every year, on the third Saturday of January, Amsterdam kicks off the tulip season with National Tulip Day (or Nationale Tulpendag). At 8am, locals start arranging over 200,000 tulips in a temporary garden in Dam Square. At 1pm, the garden is opened to the public, and visitors can nab some flowers for free. But arrive early if you want the pick of the bunch – you may have to queue with 10,000 others. 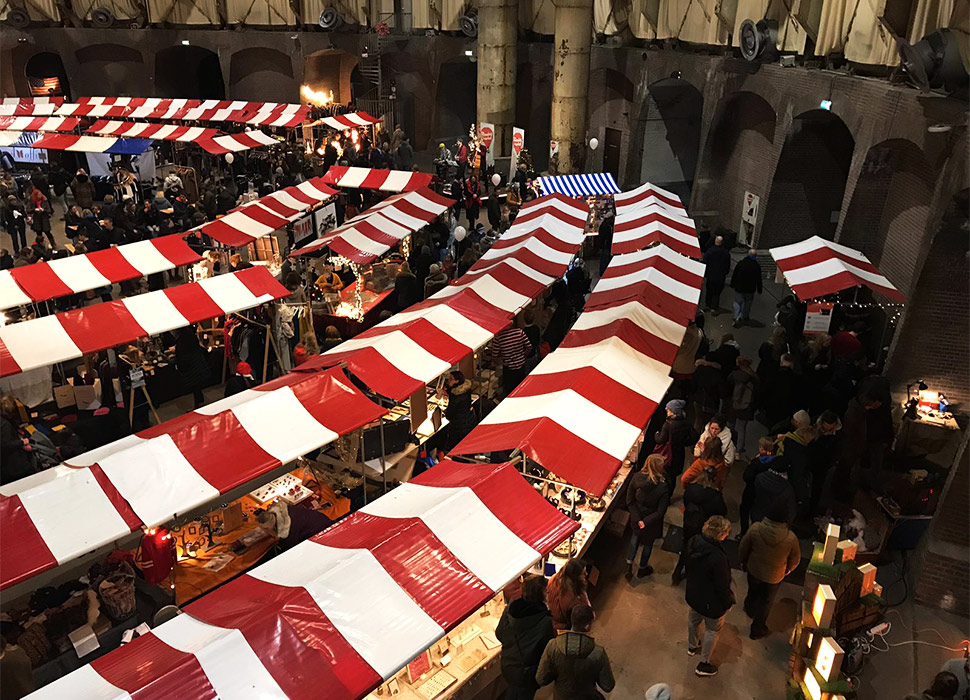 Is there a Christmas market?: This year, Amsterdam’s popular Sunday Market will be given a festive makeover, reimagining itself as the Funky Christmas Market. Held in Westergas – the city’s  former gasworks, now a creative complex – stalls span an eclectic mix of goods from craft products, interior accessories, jewellery and vintage furniture to homemade sweets, while numerous food trucks serve everything from local delicacies to international street food. Live music will get you in the Christmas mood, and be sure to sample a plate of traditional Dutch ‘poffertjes’ – mini fluffy pancakes. 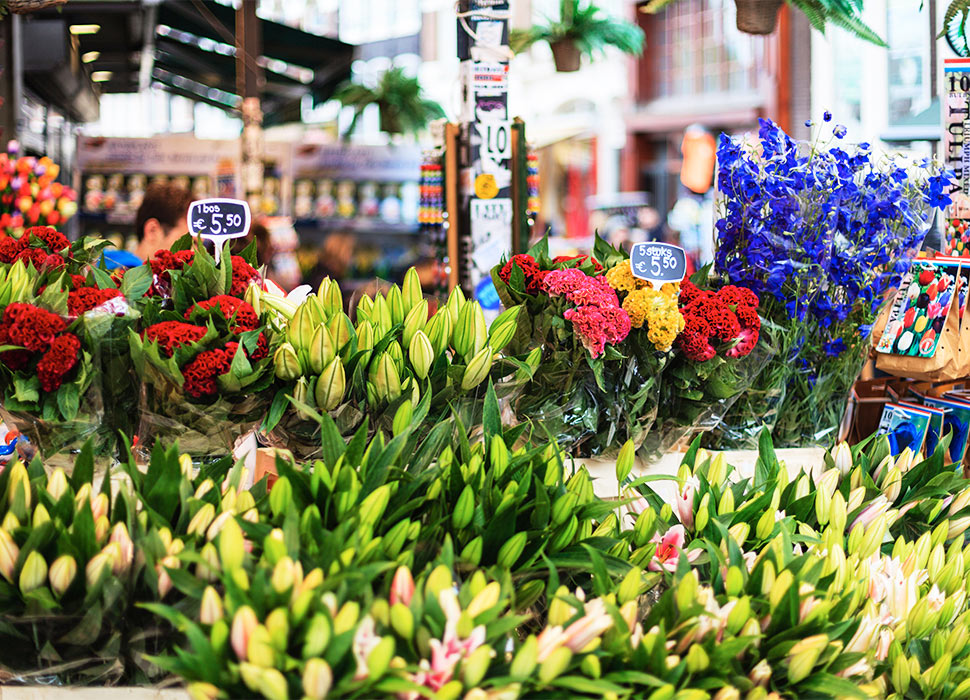 The Bloemenmarkt flower market on the Amstelveld is one of chef Adrienne Eisma's top tips / Image: Alamy

Insider's tip: Local gourmet chef Adrienne Eisma has worked in top restaurants in the Netherlands, France and Italy, and now runs a private dining company from her Amsterdam home.

“Visitors must try ‘rijsttafel’ [‘rice table’] in Sama Sebo, one of the oldest Indonesian restaurants in the Netherlands, but be sure to book well in advance,” she says. “I love the Monday morning flower market too – Bloemenmarkt on the Amstelveld – followed by a coffee on the canal.

“Finally, have the best warm fresh chocolate chip cookie from Van Stapele bakery and pop around the corner for a 6pm drink in one of the oldest cafés in Amsterdam, Café Hoppe, and try Dutch bitterballen [Dutch meatballs]."