The best beaches in Malta

Whether you're in it for smooth sands or rocky bays, buzzy days out or secluded swims, the Maltese islands have got you covered. There are countless coves to discover across the country – here’s our pick of the best

Beaches are great, but you can't stay there all night. For that, you'll need the best hotels in Malta.

And when you're up and about again, check out the best things to do in Malta. 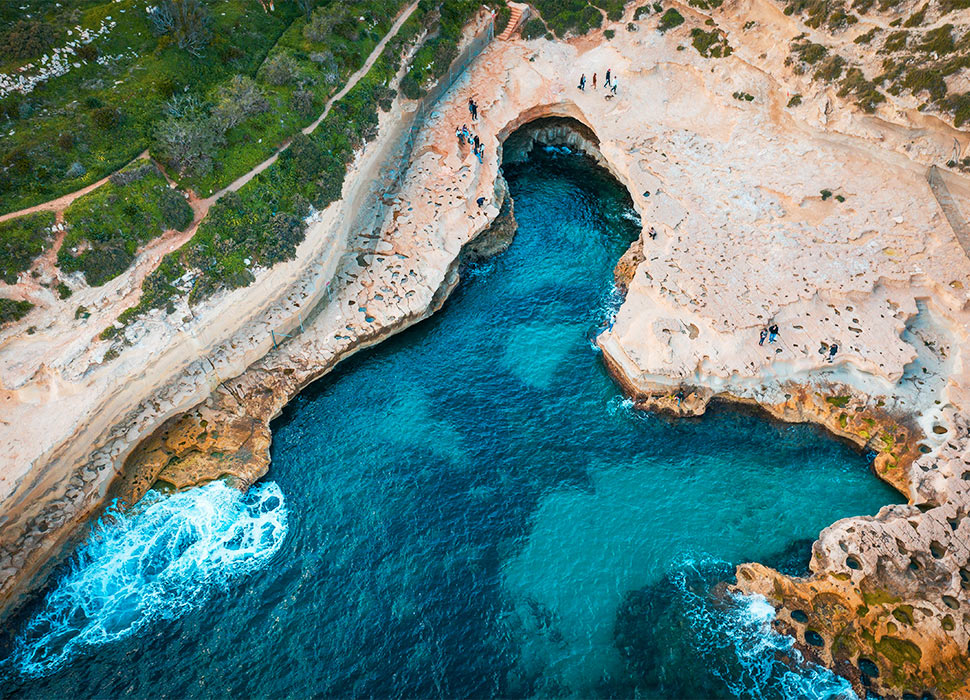 This rocky alcove is a favourite with locals and keen photographers alike, as its azure blue waters make for a dreamy place to snap enviable pics. It’s not the easiest beach to access – mopeds will get you closest – but it's worth the pilgrimage to Malta’s best natural ‘pool’, surrounded by flat rocks ideal for sunbathing. Thanks to its secluded location you’ll need to bring your own snacks as there are no vendors around, just lapping waves and blissful horizon as far as the eye can see. 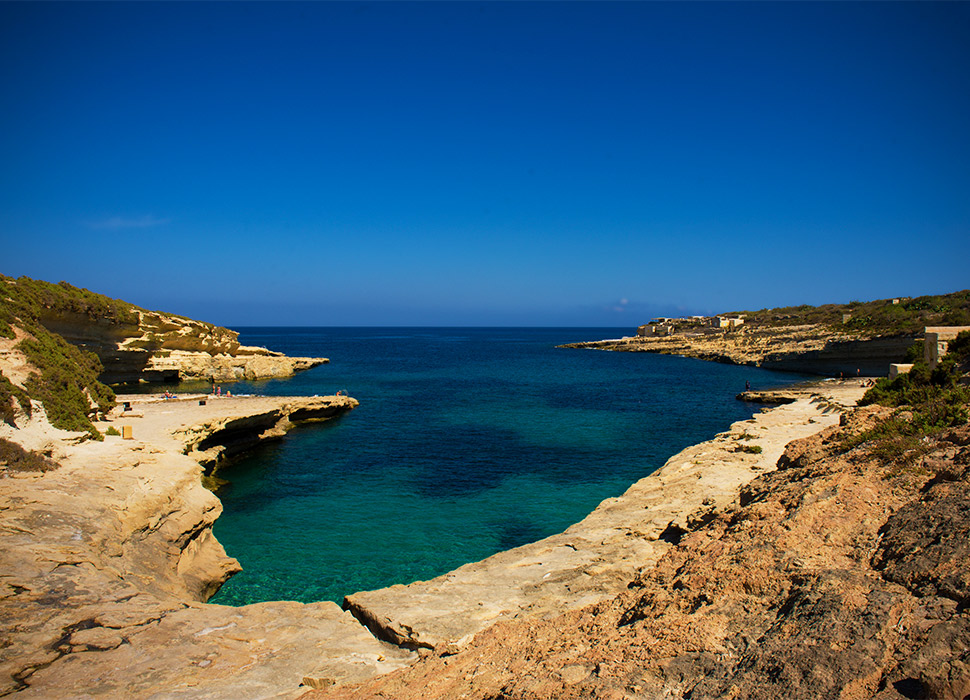 Around the corner from St Peter’s Pool, on the other side of the Delimara Peninsula, is the lesser frequented but equally as stunning Il-Kalanka. The crystal-clear water makes it perfect for less confident sea swimmers as you can see the sandy sea bed beneath your feet at all times. It’s another alcove in the coastline, with the rocks rising high above the sea level, and thus a popular spot for diving and cliff jumping too. 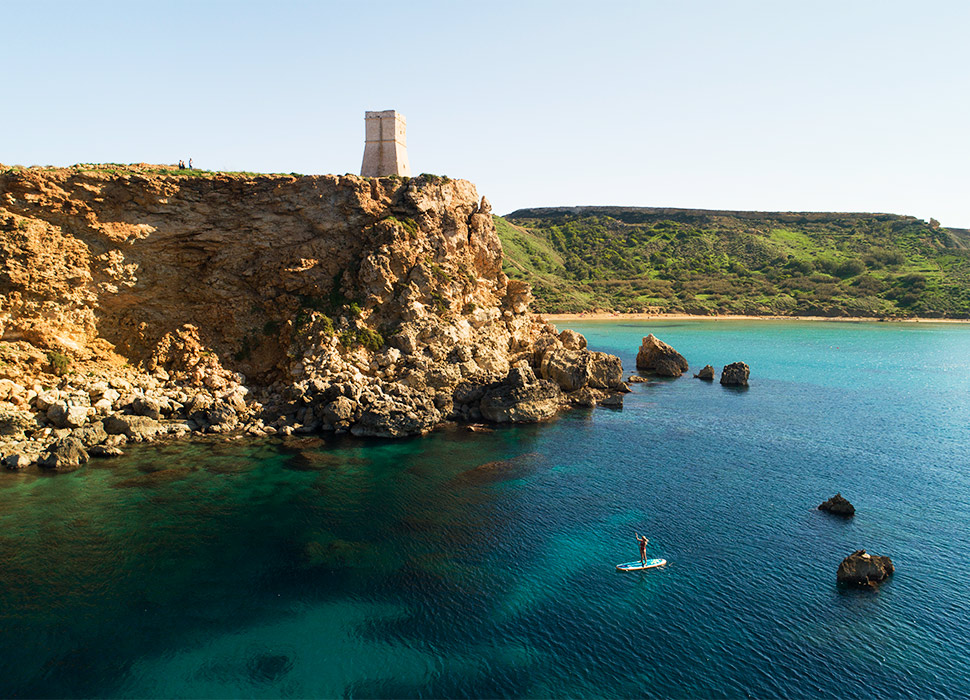 It's in the name – sunsets here are a bit special / Image: Visit Malta

Malta’s most popular sandy beach sits in a bay in the north-west of the island and is the most family-friendly option on our list. Relatively easy to access, via a short flight of steps down from the car park, Golden Bay has everything you could possibly need for a solid 12 hours on the sand: sun loungers and umbrellas, handy cafés and a fun range of thrill-seeking seaside activities, from paragliding to jetskiing. Stick around for the sunset, which is famous for being one of the island's most spectacular. 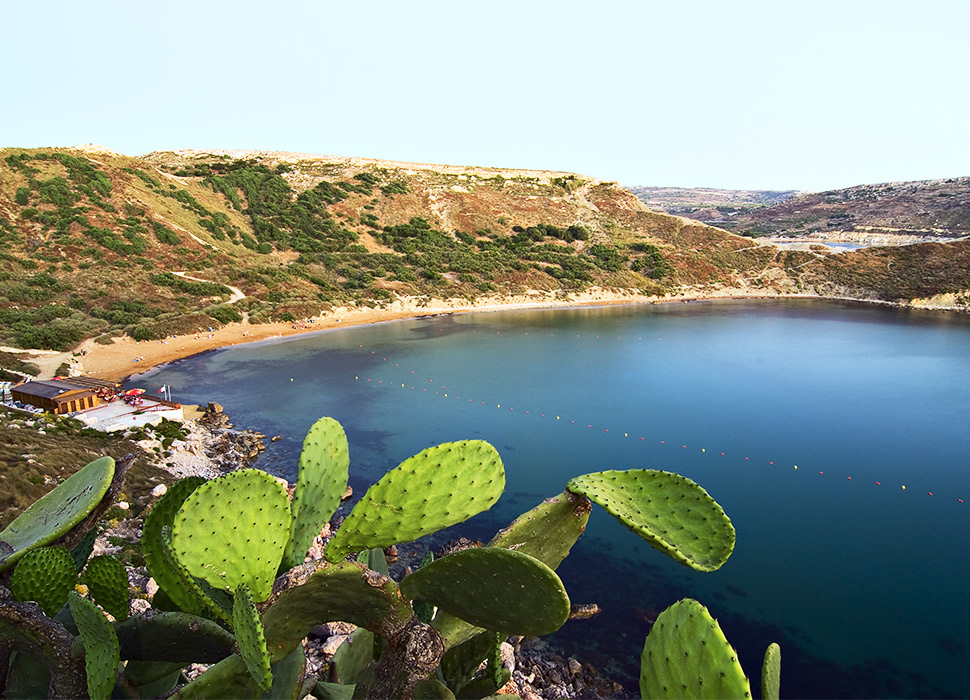 Għajn Tuffieħa is a more secluded option in this part of the island / Image: Visit Malta

Sat adjacent to Golden Bay, Għajn Tuffieħa Bay (aka Riviera Beach) is a less built-up and more natural affair, with 250m of rolling red sand overlooked by verdant flora, fauna and not much else. Umbrellas are available and there are snacks to be snaffled, but the long stretch of steps down to the sands make it a quieter day out than its busy neighbour. Hike up to the 17th-century Għajn Mixkuka watchtower between the two beaches for splendid views of a consistently magnificent sunset. 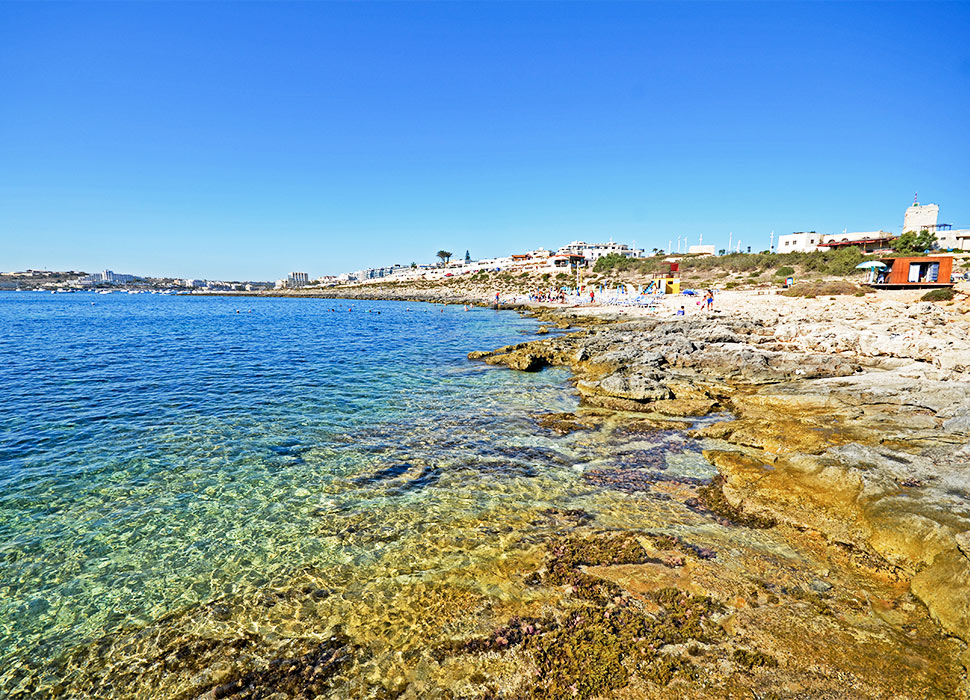 One of Malta's tranquil beaches was once an informal firing range / Image: Visit Malta

One of Malta’s best kept secrets, this small pebble beach in Qawra – in the north of the island between Bugibba and St Paul’s Bay – is known as Ta' Fra Ben to locals, after the longstanding beach bar. The appeal here lies in the still, clear waters, sheltered from the waves by a natural rock jetty that was used for target practice by the British military in the 20th century. It's convenient to reach via public transport, a safe place to take a dip, and there's an abundance of sun loungers and available snacks to wolf. What more could you ask for? 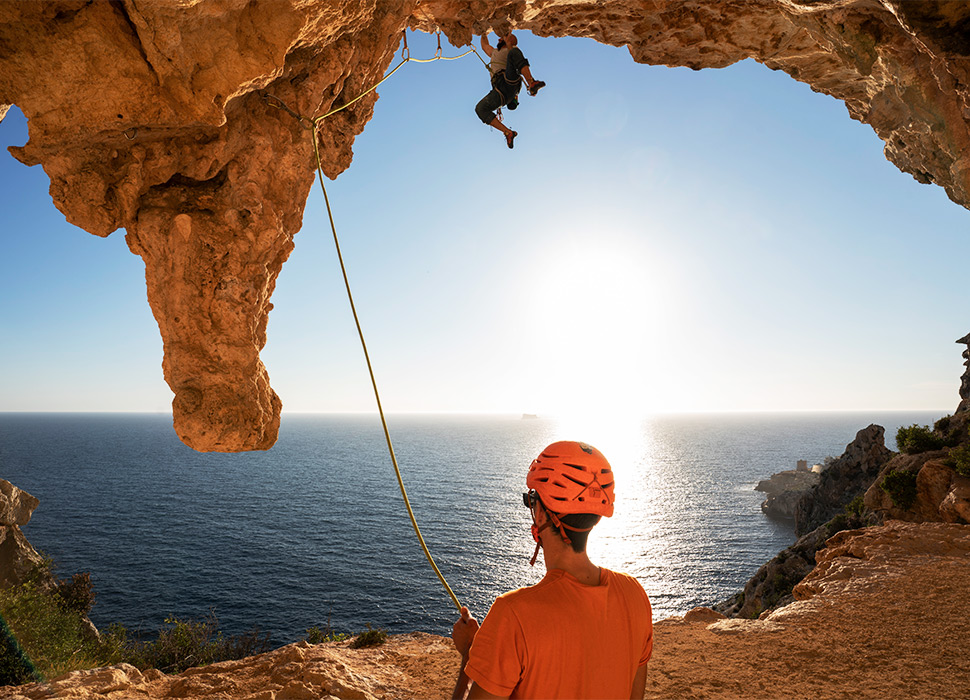 A climber takes on an overhang at Għar Lapsi / Image: Visit Malta

The cavernous curves of this rocky bay in the south of Malta have made it the number one spot for Padi divers and snorkellers for decades, with some of the best reef life on the island within its turquoise waters. It’s also a favourite with keen swimmers, as the large pools are sheltered from the open sea, so you can get some solid lengths in. There’s limited space on the shore and the rocks don't really allow for sunbathing, but you’ll want to be immersed in the water anyway. Parking by the quaint 1960s café is usually a doddle. 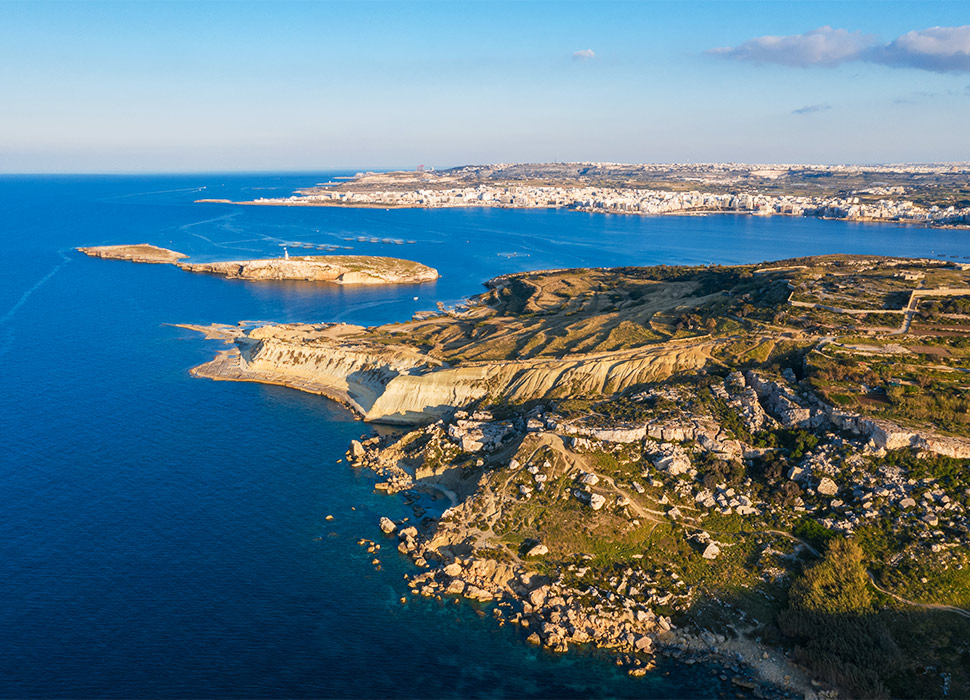 Delight in this teeny-tiny triumph of a beach / Image: Adobe Stock

The smallest of sandy beaches on our list is certainly the most remote – but intrepid dippers will be richly rewarded. It's tough to reach by public transport but doable by car or scooter – park your vehicle by the dusky pink turrets of Selmun Palace, before taking a short trek along the rugged and steep path down to the beach. There’s nothing in the way of facilities, just a slender stretch of sand, so pack your own refreshments and remember to leave no trace when you finally amble away from this rustic gem. 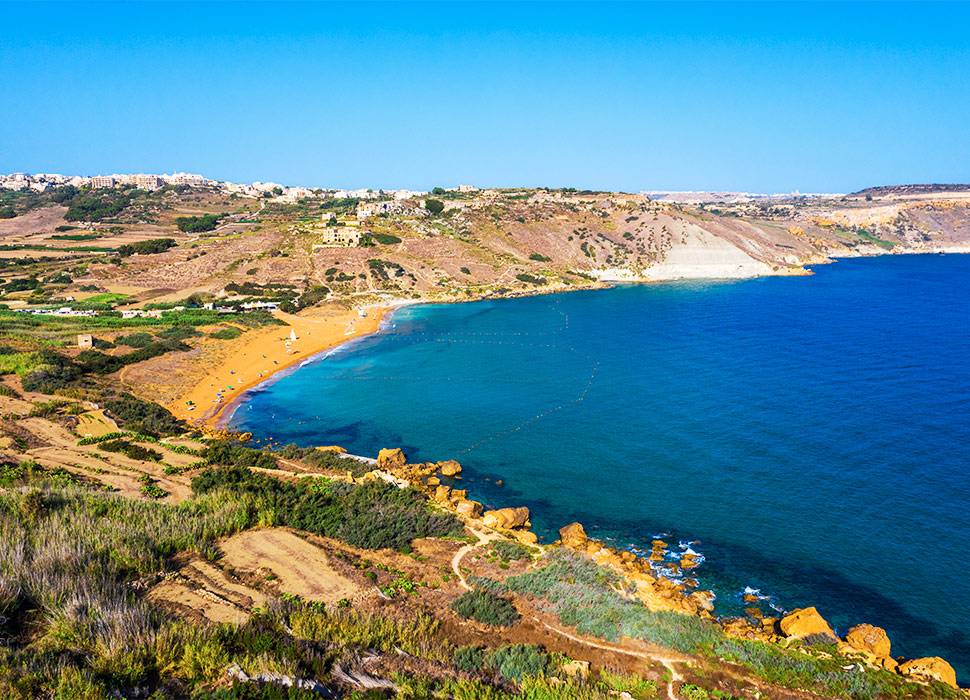 Ramla: a big hit with the Romans, and now you / Image: Adobe Stock

Hop on a ferry to Malta’s little sister, Gozo, and head to the visitor’s favourite Ramla Bay, a super-scenic stretch of rust-coloured sand that has been delighting visitors since Roman times (there’s the unexcavated remains of a Roman villa under the sands as proof, OK?). Restaurants, cafés and other necessary conveniences abound and it’s all terribly accessible – either by hopping on a bus from Nadur, or parking up your own transport and strolling down the slope. 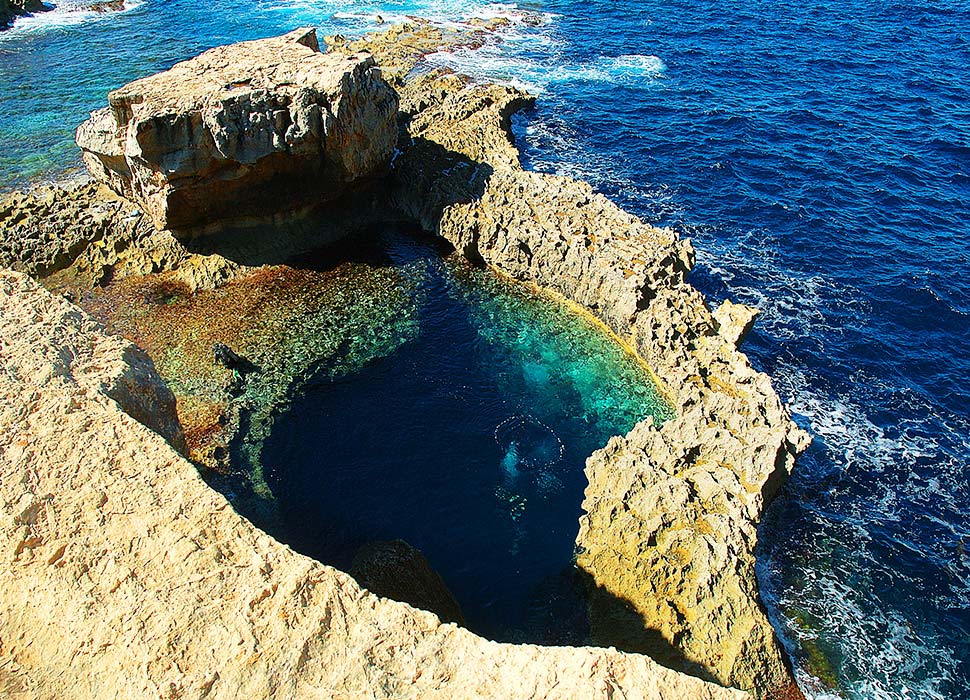 This cerulean swimming hole is one of Malta's iconic sights / Image: Visit Malta

One of the most memorable sights in the Maltese archipelago, Gozo’s Dwejra pool – aka the Inland Sea – is a large, circular basin of seawater that flows in through a small arch in the land mass that hugs it. Brave swimmers and snorkellers can pass through said arch into the open sea but it's perfectly acceptable to simply enjoy floating in the sheltered salty waters. Parking is easy, but there’s not much here but fishermen’s huts and the little pontoons they cast off from, so bring your own refreshments. 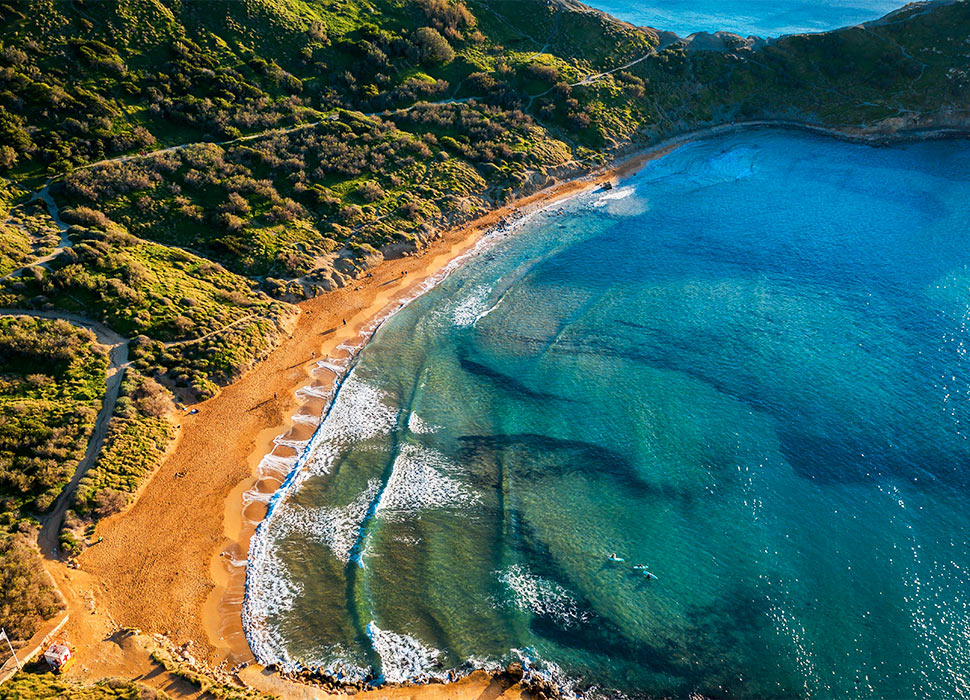 Local intel would suggest San Blas is tricky to reach – but it's worth the pilgrimage if you love your beaches basically untouched. Glossy red sands are strewn with boulders and surrounded by fields and prickly pear bushes, so you could be forgiven for assuming you’d stepped back in time to an era before Malta’s development. It’s a wonderful place to swim, snooze and generally while away a day in a beatific corner of Gozo that remains as nature intended.