The best restaurants in Venice

From opulent old-timers to perfect pizzerias, kick-ass cicchetti bars and super-vibey osterie, these are the finest places to fill your face in the beautiful Italian city 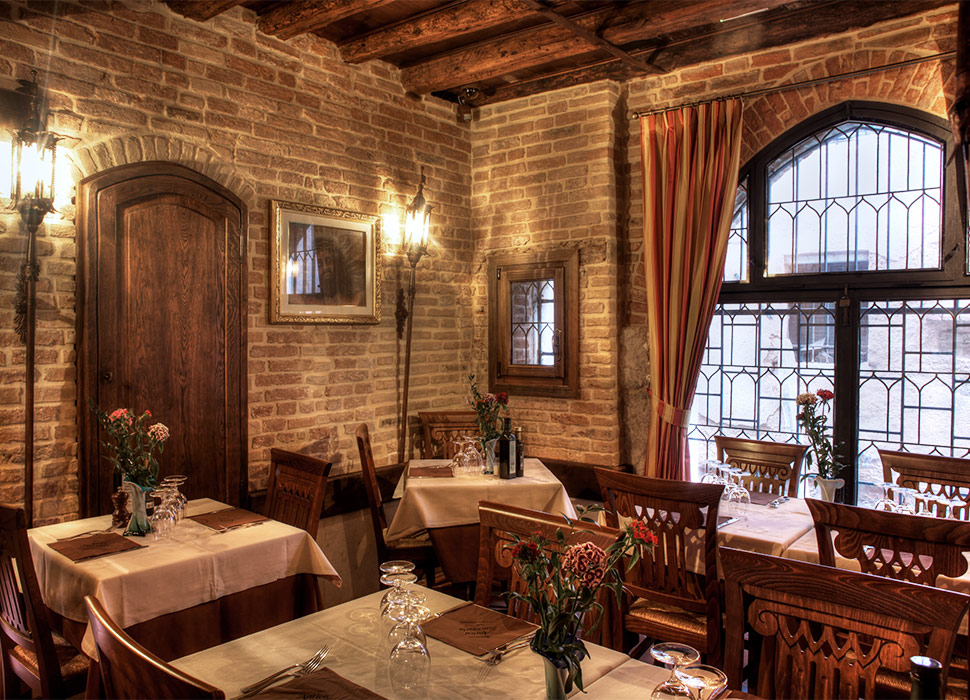 Antica Sacrestia is a low-key Venetian gem near San Marco

Owner Pino has created a temple to cucina veneziana amid the tat-filled alleys behind Piazza San Marco, in an ancient (though modernised) building set around a little garden. Skip the touristy pizza and pasta, and go the whole hog (fish), with sarde in saor (Venice’s famous sweet-sour marinated sardines), platters of just-scooped scallops baked with creamy mushrooms, and linguine smothered by giant prawns.

The great and good of the opera world (plus their cultured hangers-on) used to flock to this refined little restaurant, right behind the Fenice opera house. In fact, it's said that Maria Callas had a secret route in, allowing her to eat undisturbed by admirers. Things have barely changed since its heyday; behind the swirled glass windows is an intimate, art nouveau time capsule, where the music's low, the service genteel and the food – a rare meat-heavy menu for Venice – is preceded with dainty crudités. Try the signature risotto de secoe, which has slivers of beef dotted within the creamy rice. 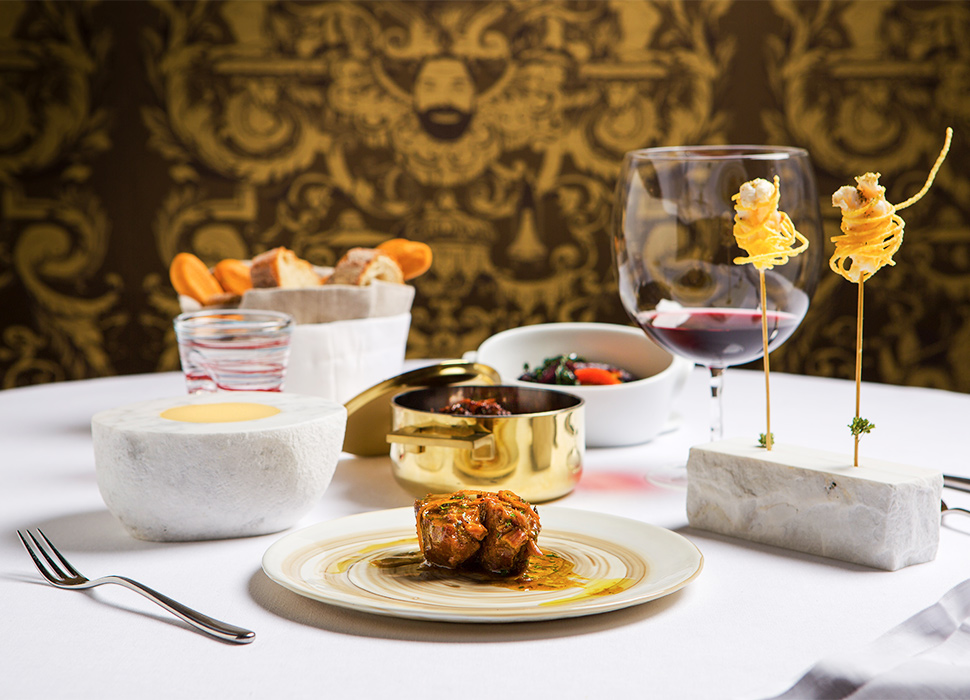 The food at Quadri is almost as ace as the setting / Image: Marco Peruzzo

The question is, who hasn’t been to Quadri? From Byron to Brad Pitt, the world’s great and good have landed here at one of the most famous cafés in Piazza San Marco. Today, you can drop your savings on a cappuccino or a spritz outside in the piazza – it’s one of the bucket-list Venice activities – but if your budget stretches a little further, forget the outdoor tables and venture upstairs to the Michelin-starred restaurant. The food – think cuttlefish pasta with oysters, that sort of thing – is as good as you’d expect, but the setting will take your breath away. Two centuries-old palazzos have been smushed together, with outré modern damask walls, a stuffed lion over the entrance and once-in-a-lifetime views over the Piazza.

Want a quick lunch on the run, but it has to be good? You need Ae Bricoe, on the buzzy Fondamenta della Misericordia bar strip in Cannaregio. Venetian bacari (bars) are known for their cicchetti, or snacks, and here, sibling owners Stefania, Davide and Federica Michielan make some of the best in town: dainty pieces of bread topped with exciting combos of deli meats and spices, lumps of cheese, and entire (little) fish. They also do a mean tramezzino – a mutant kind of sandwich, exploding with fillings like radicchio and sliced porchetta cured by a family friend. 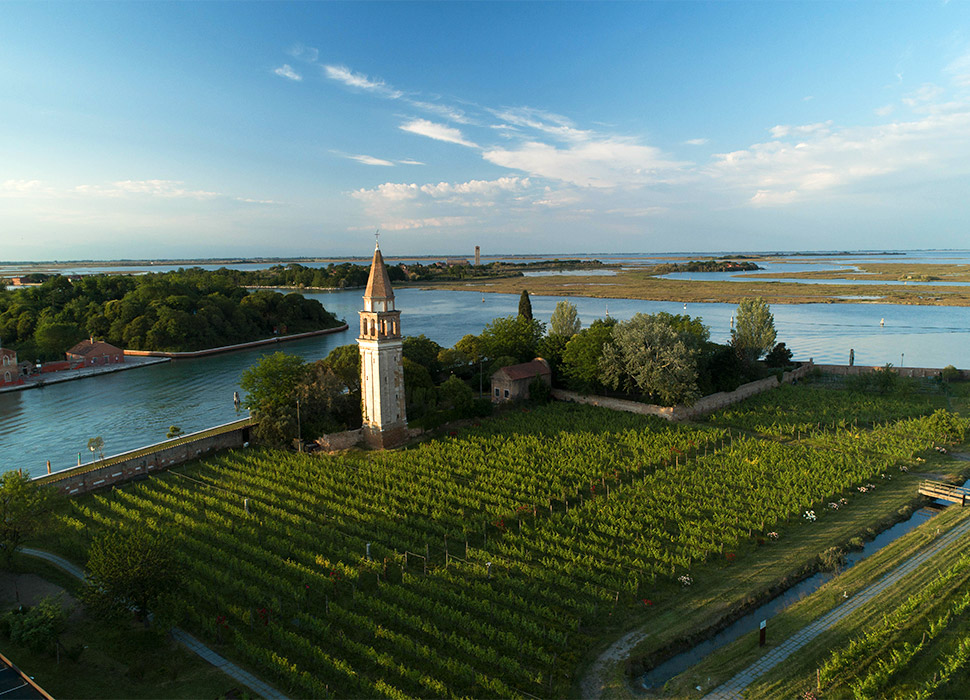 It’s worth the half-hour vaporetto ride from the city to Mazzorbo (the island next to Burano) and this knockout restaurant. The Bisol family, which made its name in the local prosecco trade, noticed a straggly vineyard on Torcello, the semi-abandoned island nearby, and realised it was the Dorona grape, which grew all over the lagoon in centuries past. It was almost extinct but they vowed to bring it back to life – and do so in this vineyard, with a Michelin-starred restaurant attached. The veg is grown by Burano’s pensioners in the park-like grounds, and there’s a cheaper osteria if your budget won’t stretch to the main eatery. This isn’t just great food – it’s a brilliant example of tourism that helps the community, in this poster-child city of overtourism.

Forget about pizza – this is possibly the only place in Venice you can try a genuine puccia, a kind of Puglian pizza crossed with a sandwich. The owners, both from Puglia, opened this lovely, teeny spot in summer 2020. It's part-restaurant / part-café, and open all day, meaning you can fill up on southern specialities, such as a warm, lemon custard-stuffed pasticciotto with your morning cappuccino to what some swear is the lightest, most digestible pizza in town. And, of course, that DIY puccia, which comes with whatever combination of fillings you like (they give you a list on a piece of paper, and you tick as many boxes you want). 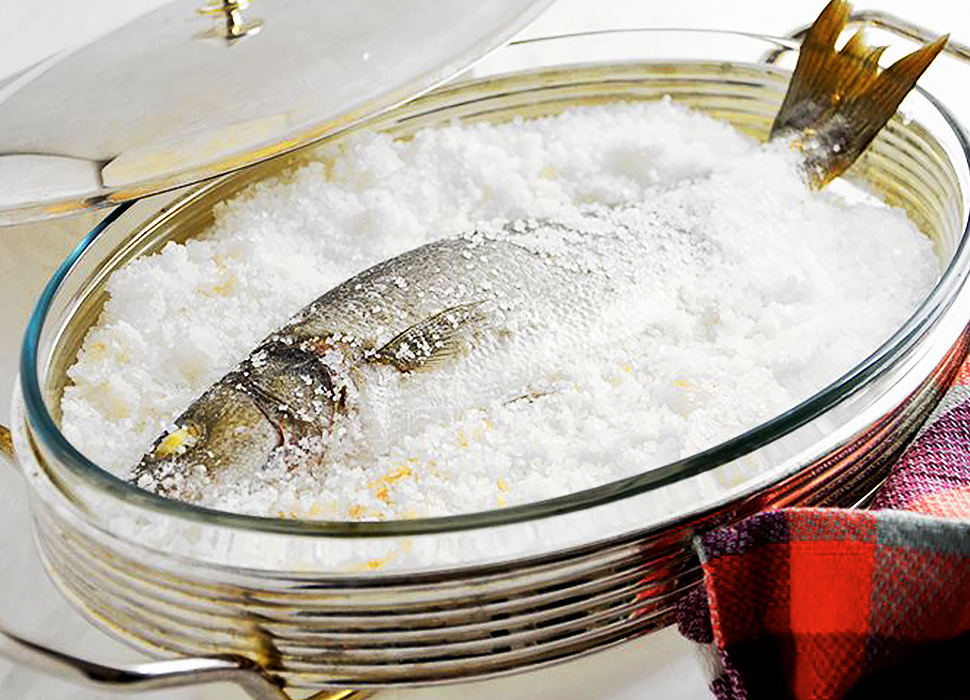 When you’re sitting at the edge of the Giudecca Canal, watching the Salute church glow as the sun goes down, setting the water aflame, nothing matters but the view. But worry not, because once the light has left, there’s plenty to chew on at this bar/pizzeria/restaurant hybrid (there are two buildings next door to each other, each with a slightly different vibe). The huge pizza list is insanely good value (from €4.50) considering the location – while the restaurant part is more refined, with a heavy focus on local seafood, from grilled cuttlefish to salt-baked sea bass.

Make sure there are two of you going to Ai Frati, because that’s the minimum order for the risotto di gò – using a type of goby fish found in the lagoon. Creamy, with a dreamy amount of cheese mixed in, it’s worth the boat out to Murano for alone. This is a nice scene, too – buzzy and full of locals, many of whom appear in the vast mural taking up the entire wall of the main dining room. Being mid-lagoon, it’s a pretty seafood-heavy menu – although if you’re feeling adventurous, the fegato alla veneziana (calf liver stewed with onions and broth) is excellent. 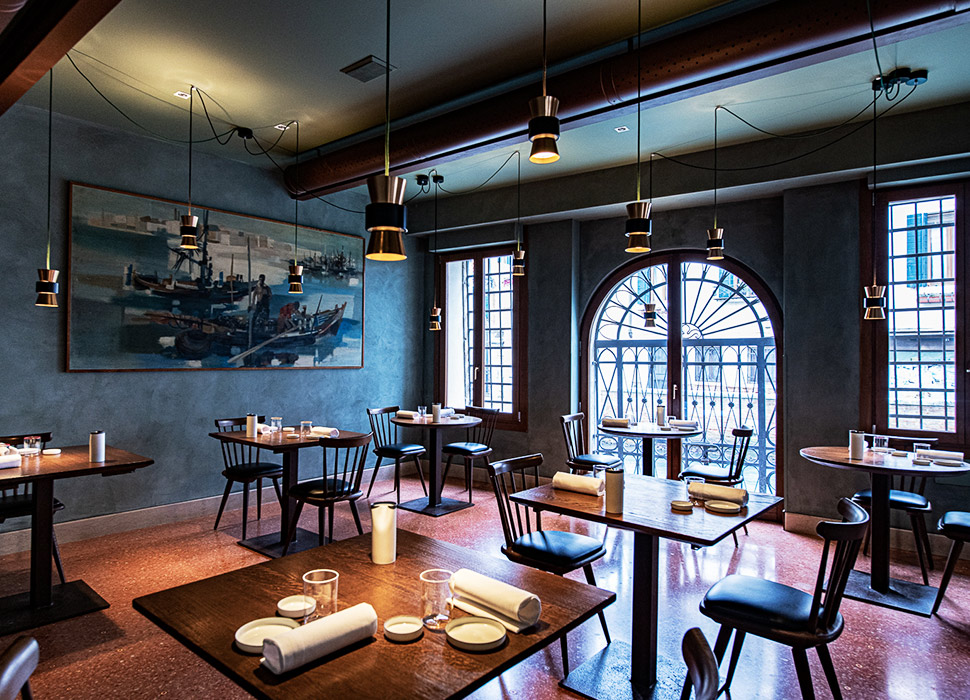 Local's forward-thinking fusion food is a standout in Venice

In a competition between traditional and contemporary, Venetians would choose the former every time. Which is what makes this place, housed in an old electrical goods shop, all the more exciting. Chef Matteo Tagliapietra, who’s worked everywhere from Nobu to Noma, takes the raw ingredients from his native lagoon – eel, say, or goby fish – and turns them into something global, pairing the former with mango miso and chicory, or the latter with katsuobushi and nori. The set lunch menu is great value (at €38), if you can’t stretch to dinner (which sees seven courses from €95).

It's fast, it's delicious and it has a social conscience – if you need a break from Italian food in Venice, there’s only one place to go. Or, to be precise, two places to go, since the original Orient Experience in Cannaregio was so successful a second has sprung up in Campo Santa Margherita. Founded by Afghan refugee Hamed Ahmadi, and staffed by new arrivals to Italy, the restaurants serve up much-loved dishes from the staff’s home countries, although there’s a special focus on Afghan food – the ravioli with spicy chickpea sauce is to die for. Don’t be put off by the canteen-like aspect (most of the food is dished up in front of your eyes); the food is superb, and the quick service means all the more time for sightseeing. 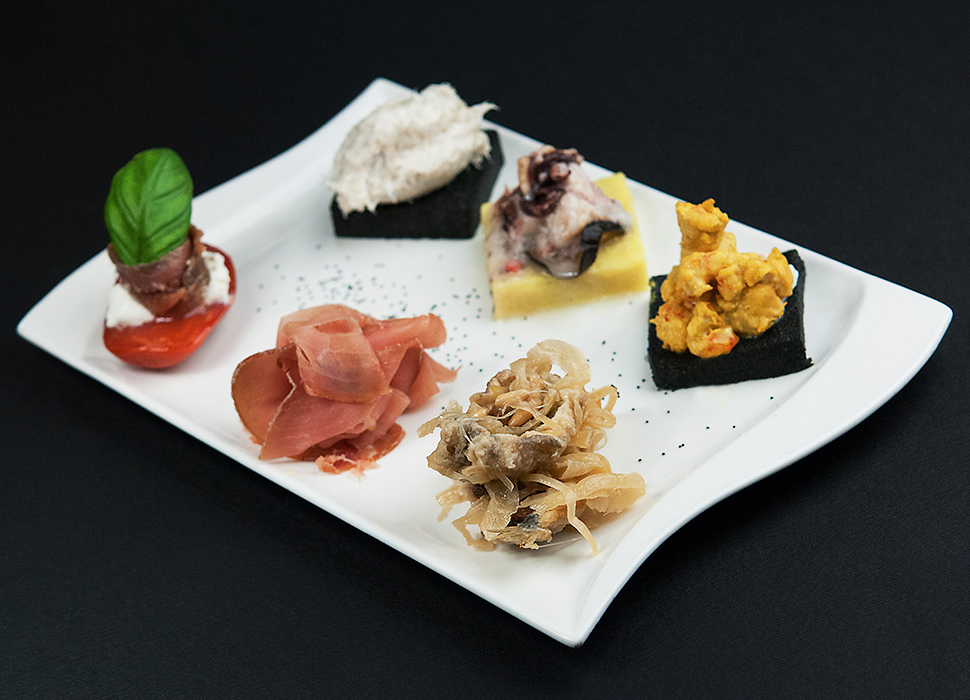 The area below the Rialto Bridge has always been known for its bacari, as well as its markets – and today, the Erbaria (the former wholesale vegetable market) is one of the city’s most refined drinking hubs, with tables laid out on the edge of the Grand Canal. Bancogiro is one of the best – think fancy cicchetti, crostini piled with cheeses and wafer-thin hams and salami, and sarde in saor on cubes of polenta – plus there’s a restaurant upstairs if you want a more formal meal.

Beside the Fenice opera house, this is one of Venice's grande dame restaurants – even the walls are gussied up with opulent murals. It's famous for its risotto, and justifiably so as the creamy, daily special dreamed up by the chef tends to defy description. Don’t miss the seafood cicchetti, though, which push Venetian bar food into an art form. And get ready for the full Italian experience – its slick, top-notch service is what has kept the diners (everyone from Charlie Chaplin to Gina Lollobrigida) coming since 1863. 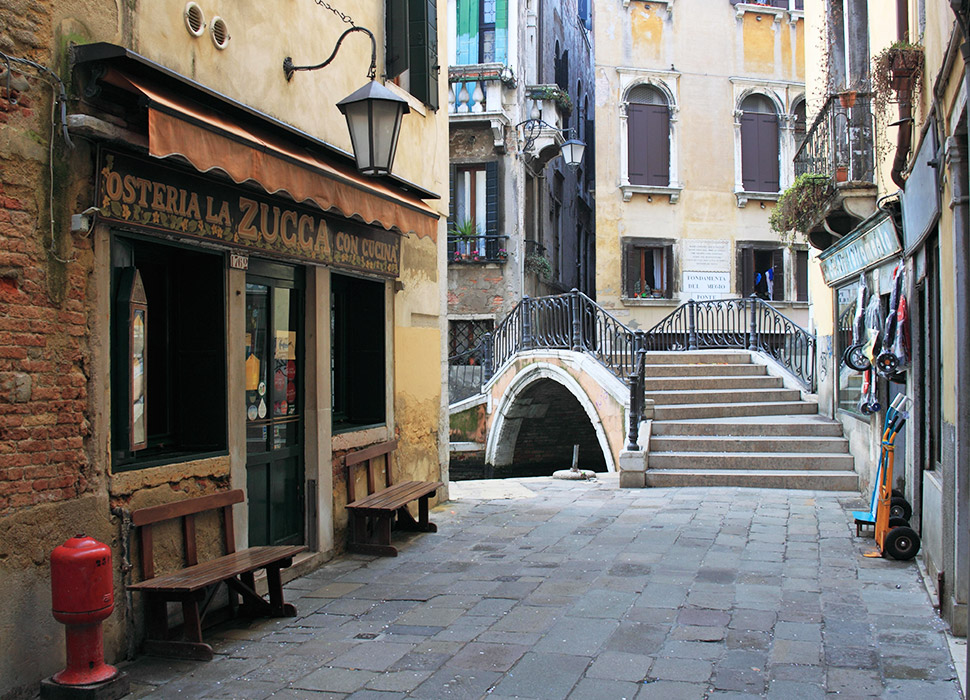 In a city of fish restaurants, La Zucca's veg-heavy menu is a welcome delight. Despite the name ('zucca' is pumpkin in Italian) it's not solely vegetarian, but its superb dishes – think tagliatelle with gorgonzola, pear and pistachio, and a fine veggie lasagna – are the main event, rather than an add-on. Make sure you try the imaginative sides (think prosecco-stewed mini onions, and greens sautéed with chilli), and if it's in season, go for the zucca in saor – their take on sarde in saor, only switching the usual sardines for pumpkin, which is sweet-sour marinated with onion, currants and pine nuts.

Join the queue for pizza in the sun at Oke, perched on the Zattere waterfront, one of the sunniest spots in Venice. That’s if you want to pay the small supplement to sit outside; if not, the industrial-chic interior (it’s a converted warehouse) is pretty special, too. If you like variety, you’ve come to the right place – there are around 80 pizzas to choose from, and various doughs, including spelt and gluten-free. The pizzas are great, but if you want something lighter, the giant salads are sublime, too.

It’s all about the meatballs at this old-timey tavern down an alleyway near Ca’ d’Oro. They’re the stuff of Venetian legend – enormous, delicately spiced but packing a parsley-flavoured punch, and with a super-subtle breadcrumb coating. One per person is enough; wash it down with a glass of wine, served from huge, hand-painted jugs. Most guests cram round the bar or spilled outside into the alley. Want a seat? There’s a restaurant area too, serving pasta and seafood, but whatever you choose, don’t skimp on the meatballs.