Fancy puttering your own way around these classical waters? Now's your chance / Image: Getty Images

Take a punt on gondola school in Venice

An all-female collective is reviving the ancient rowing technique of ‘voga’ on Venice’s canals. We get on board at gondolier school

Fancy puttering your own way around these classical waters? Now's your chance / Image: Getty Images

It’s a busy day on Venice’s waterways, and I’ve got an urgent question for my rowing teacher, Elisa.

“How deep is it?” I ask. “About two metres here on the canal and eight when we get out to the lagoon,” she answers. I’m trying to figure out whether I’d need my nonexistent swimming skills if I were to end up in one of Venice’s famous canals. More worrying is the green-tinged lagoon, with water taxis and ferries jetting across it at full speed. Was that a water ambulance I just saw? Did someone fall in? 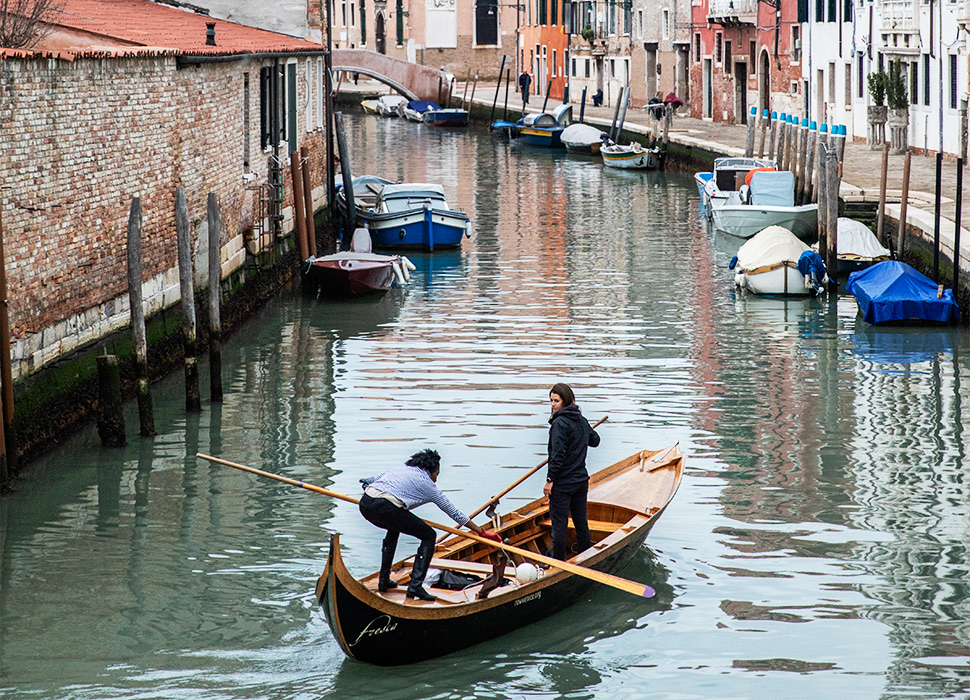 Having an oarful time on a Venetian canal / Image: Tim E White

Elisa works for Row Venice, an all-female crew aiming to keep voga – a traditional style of rowing – alive by offering lessons to the city’s many tourists. Rather than gawping at the Piazza San Marco with the rest of them, I’ve got the chance to experience the sinking city as I imagine you should: that is, wobbling about on the back of a boat, wearing a stripy top.

“I had never rowed before I came here,” Jane Caporal, Row Venice’s founder, told me before my lesson began, “but I took it up to socialise.”

Jane arrived in the city 30 years ago and, in no particular order, fell in love with rowing, Venice and a local, then never left. She was the first foreigner to compete in the city’s Vogalonga regatta – a 30km rowing marathon held every June. Prize money for the race is less for women than men, so now she sponsors members of her 20 strong team of voga instructors to enter. 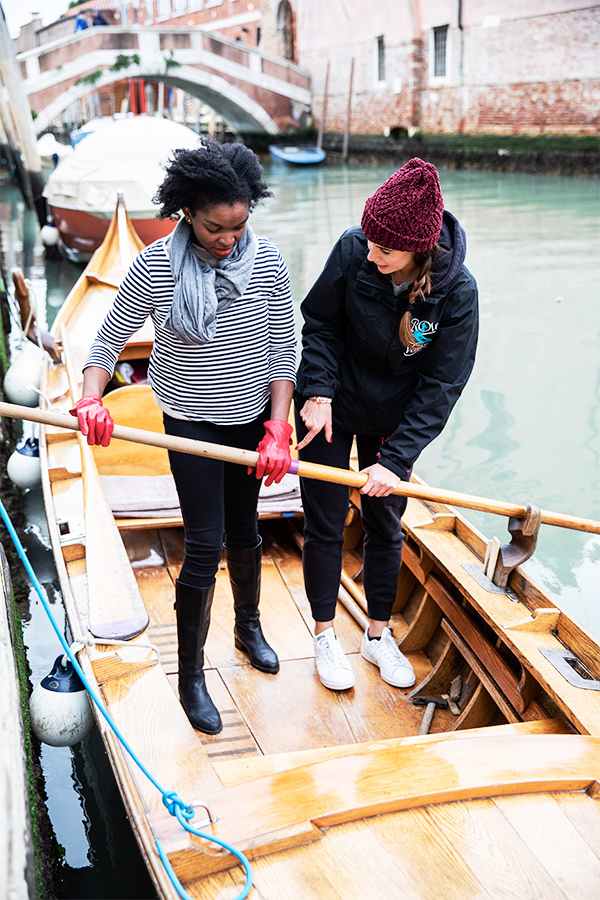 “Row Venice is about keeping a tradition alive while levelling the playing field,” Jane explained – and then introduced me to my boat – a batela coda di gambero (shrimp-tail boat) tied to a striped pole – and instructor, Elisa, who is evidently blessed with a perfect centre of gravity.

We start off with Elisa showing me the forward-backward rocking motion combined with the correct spacing of the arms and feet, and the rotation of the oar. It basically looks like you’re doing the Austin Powers ‘oh, behave!’ cat paws. Easy enough, I think, watching Elisa row with the grace and indifference of someone who’s been at it since she was 10.

“Has anyone ever fallen in?” I ask.

“It happens,” Elisa shrugs. “But only when people don’t listen.” I’m all ears, I assure her.

Voga takes skill, coordination, upper- and lower-body strength and, quite importantly, effort and enthusiasm. With the wind whipping in my face, I fear I might quickly run out of the latter, but when Elisa hands me the hefty oar, I start to feel some of my instructor’s youthful confidence pass to me. Elisa hasn’t said that it’s difficult. In fact, she’s mentioned that she’s had four-year-olds successfully navigate the tight canals, so of course I can, too. 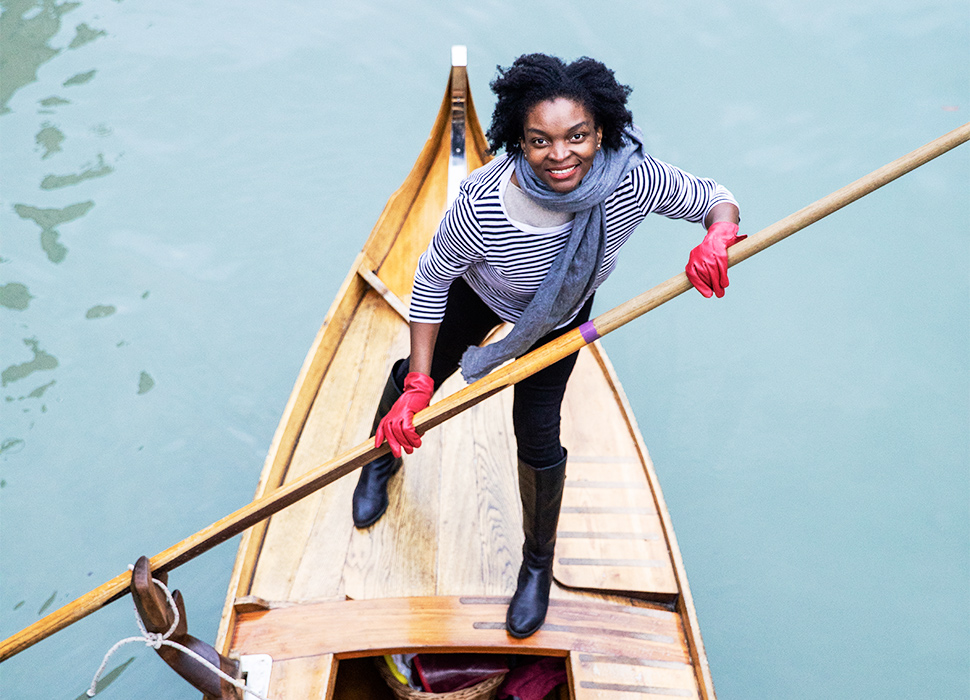 It's just like that Cornetto ad all over again / Image: Tim E White

Once out on the canal and moving, I feel pretty calm, almost relaxed, soothed as the rhythm of the motion takes over. The trick is to push against the canal with the flat side of the oar, then return it to its starting point by cutting sideways through water, steering as you go.

These gondoliers don’t get paid to be lulled to sleep by the Venetian waters, however. Up until this point, I’ve been rowing from the hull while Elisa mans – sorry, womans the stern.

“Why don’t you try your hand at rowing from the back?” suggests Elisa.

Minutes later and I’m sticking my oar in with virtually no effect. I immediately forget about my Austin Powers moves. Did I mention that the oar is hefty? As in, it’s like wrangling a small tree? After having been a star pupil I’m now ashamed of my failure to multitask and yet Elisa is still very encouraging, to the point where I at least start to feel chuffed that I’m keeping my balance, even if we are moving at a snail’s pace. 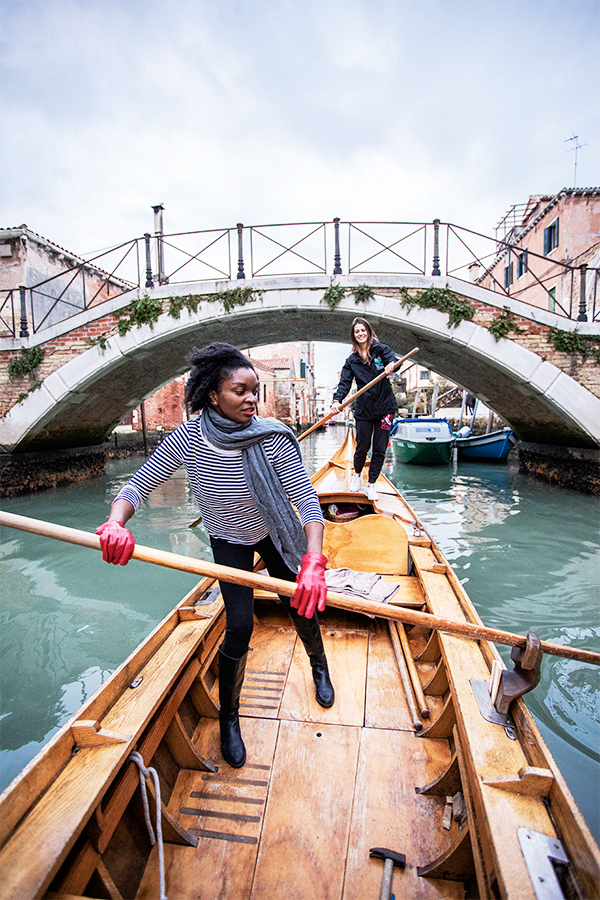 Picking up some speed on these hallowed waterways / Image: Tim E White

I start taking in the views of the impressive surroundings. For instance, Elisa points out Tintoretto’s house and former studio. I quickly side-eye the pink building, before struggling to straighten out a wobble. As sightseeing tours go, this one feels unique.

At the end of our 90-minute session I step back onto dry land feeling exhausted, elated and, above all, relieved to be dry. I didn’t make it out to the lagoon – I only waved at it as we took a left and bypassed the area – but I didn’t fall in, which earns me high fives all round.

I hope my lesson and other visitors’ participation has an impact on Jane’s plan to level the field for women like Elisa. The idea is not only to raise funds, but also awareness. Gondoliers are required to pass a tough exam, much like London’s black-cab drivers. Shockingly, only one woman has ever passed and been granted official recognition as a gondoliera.

“The idea of Row Venice is to open things up,” Jane says, as I ready myself to rejoin the flow of regular tourists. “If we want the tradition to expand, we can’t rely on the dwindling local population. We need to share it with the people who want to know more about the city.”