The largest island in the Mediterranean is surrounded by smaller specks of land that are equally worth a look – these are the very best on the Aeolian archipelago, all just a short ferry away from Sicily 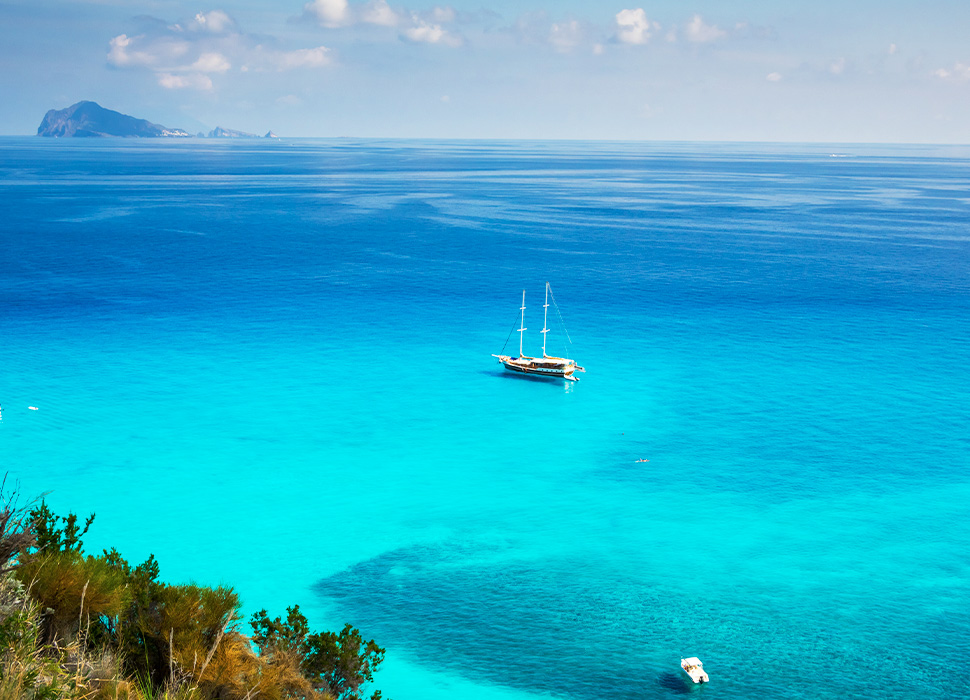 It's impossible to be blue in Lipari / Image: Adobe Stock

The biggest of the eight Aeolian Islands just off the north-east coast of Sicily, lively Lipari is the gateway to the more remote, low-key volcanic islets in the cluster, but is definitely a destination in its own right. OK, the town might be a bit too 'developed' for some (read: touristy) but, hey, that means more restaurants and bars than on Salina or Panarea. Plus, it’s super easy to escape to the island’s quiet, secluded bays: take the rugged coastal walk to Valle Muria and refresh at a no-name cave-bar (return via a €5 taxi boat), or head to the east coast where the clear, turquoise water of Spiaggia Bianche seriously makes the Maldives look meh.

3hrs 55mins by ferry from Palermo 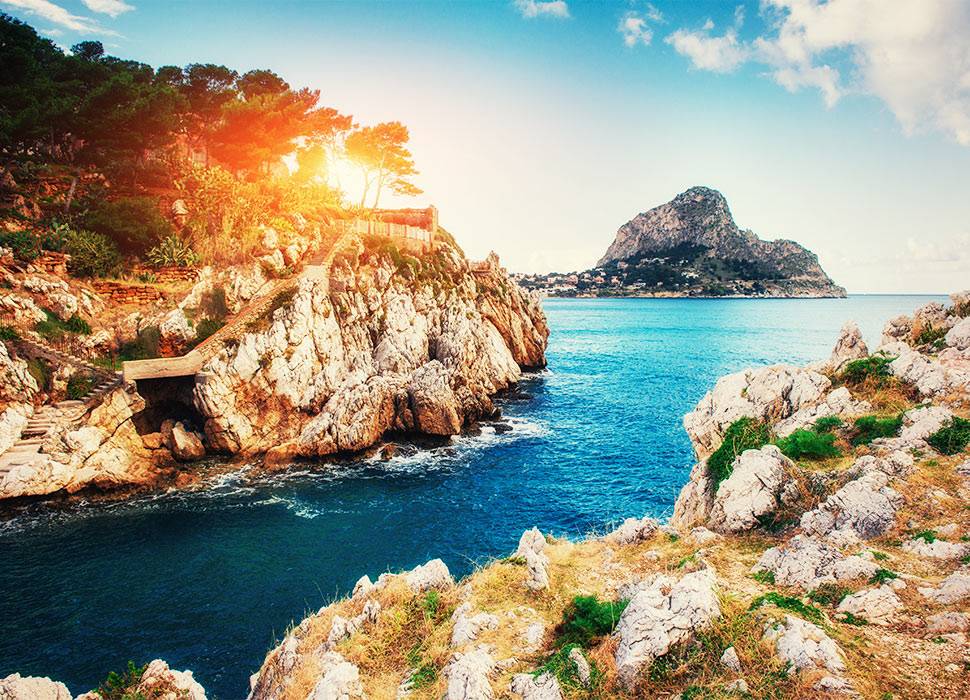 Salina is second-largest island in the archipelago, but first in looks / Image: Adobe Stock

Gorgeous, unspoilt Salina is the second-largest Aeolian island, but feels far away from nearby sibling Lipari. It’s less busy, for one thing, but there's still no shortage of excellent restaurants (for dreamy seafood try Porto Bello at Santa Marina). Or there’s an epic mountain hike to the island’s highest peak, Monte Fossa delle Felci, plus beautiful remote beaches such as cliff-backed Pollara, as well as four pretty coastal villages to explore (make your first stop super-chill Malfa, known for its own itty-bitty secret bay).

3hrs 20mins by ferry from Palermo 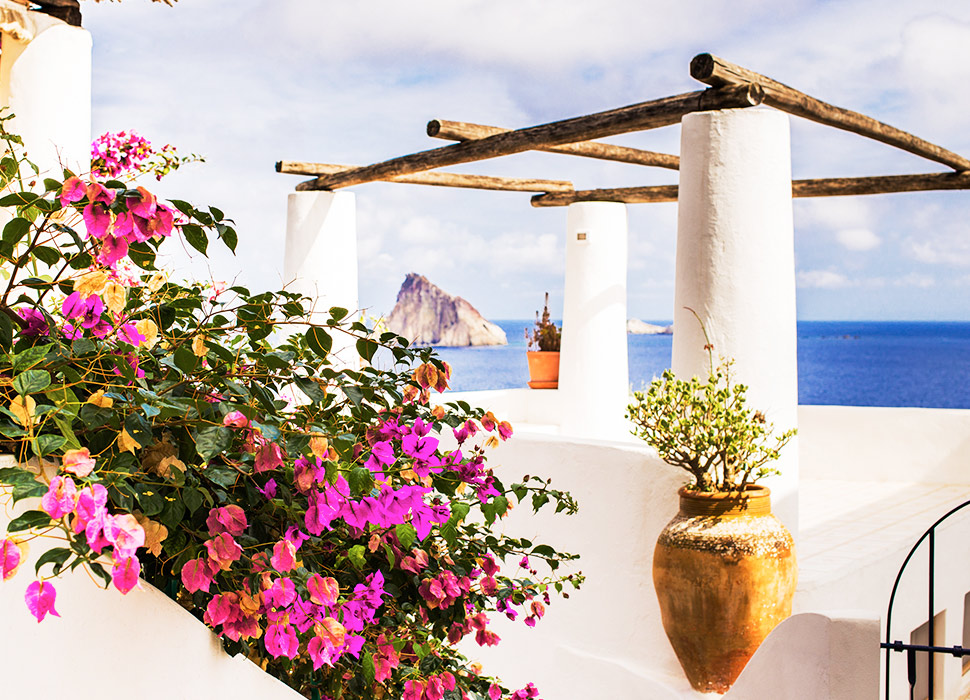 Take in sweeps of the sea from pretty Hotel Raya / Image: Adobe Stock

Tiny party isle of Panarea might be to the Milanese what the Hamptons are to New Yorkers – a chic, exclusive escape for a spenny fashion set to decompress in the summer. But, hey, if you’re got the budget, check in to Hotel Raya, the island’s splashiest hotel and one of the best-known nightclubs in Italy. But even if you don’t, the island has many other charms, like the petite, car-free streets of San Pietro, or the secluded bays on the south of the island (we recommend Zimmari or, further along, the always-empty Cala Junco).

4hrs 40mins by ferry from Palermo 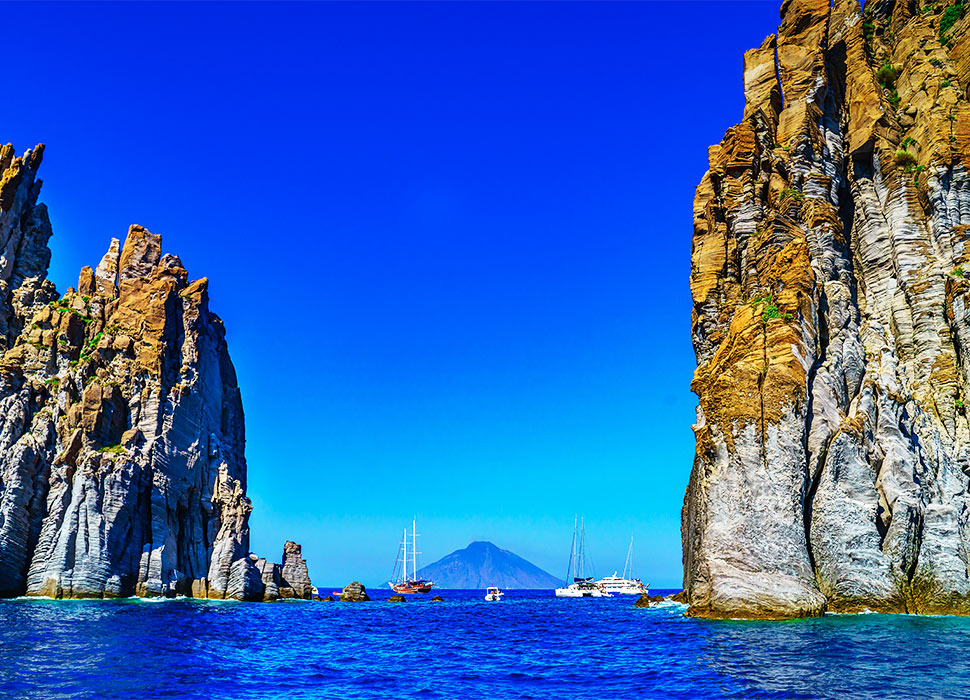 This volcanic island is word-famous for its pyramid-esque shape / Image: Adobe Stock

Ask a five-year-old to draw a picture of a volcano, and it will likely look like Aeolian islet Stromboli: a triangle-shaped mountain with smoke and lava streaming from its top. Yup, it really does constantly spew hellfire into the sky, as it's one of the world’s most active cones (that can be reached via a tough, four-hike to the island’s summit). Still, fortunately, there are easier-going excursions on the rugged island that designers Dolce & Gabbana call home – head for the chill black sands of Spiaggia Lunga or spend the day at the seriously secluded but so, so gorgeous village of Ginostra, only reachable via boat.

5hrs 25mins by ferry from Palermo 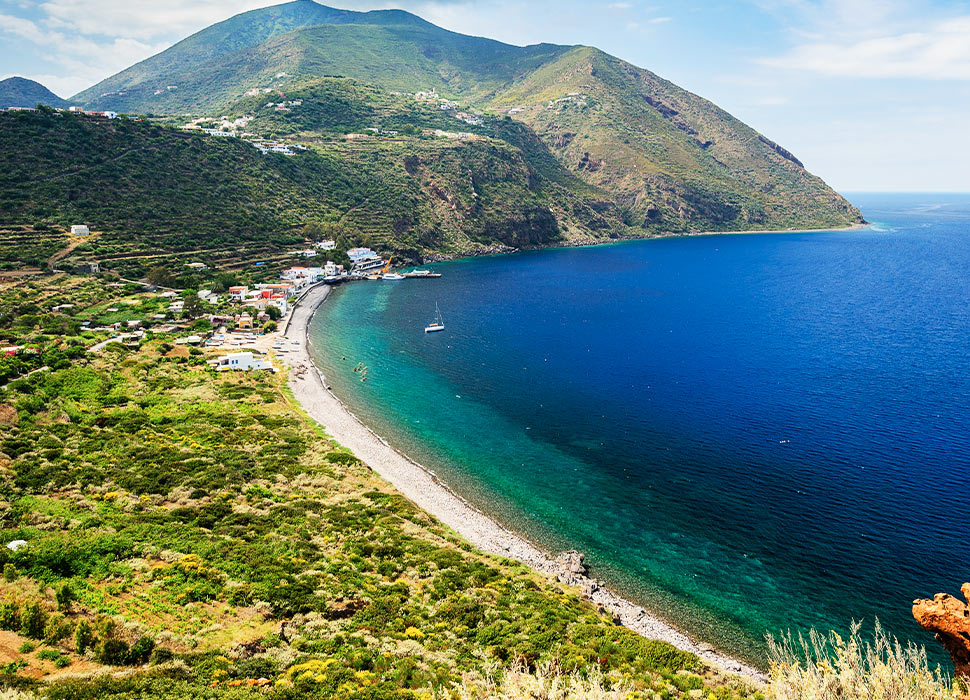 The least-visited Aeolian island is truly away from it all / Image: Adobe Stock

The least-visited, least-developed island in the Aeolian archipelago, tiny Filicudi is home to only 300-odd people, but is slowly getting a rep as a cool retreat thanks to its chic stays. For big budgets, there’s stunning, style-mag fave Filicudi Secret Villa, or the less-spenny Pensione La Serena in Pecorini has a tumbledown, seaside swag all its own. Either way, don’t expect to be busy. This is the back-to-nature island with not much to do but forget and unwind. Bliss.

2hrs 30mins by ferry from Palermo 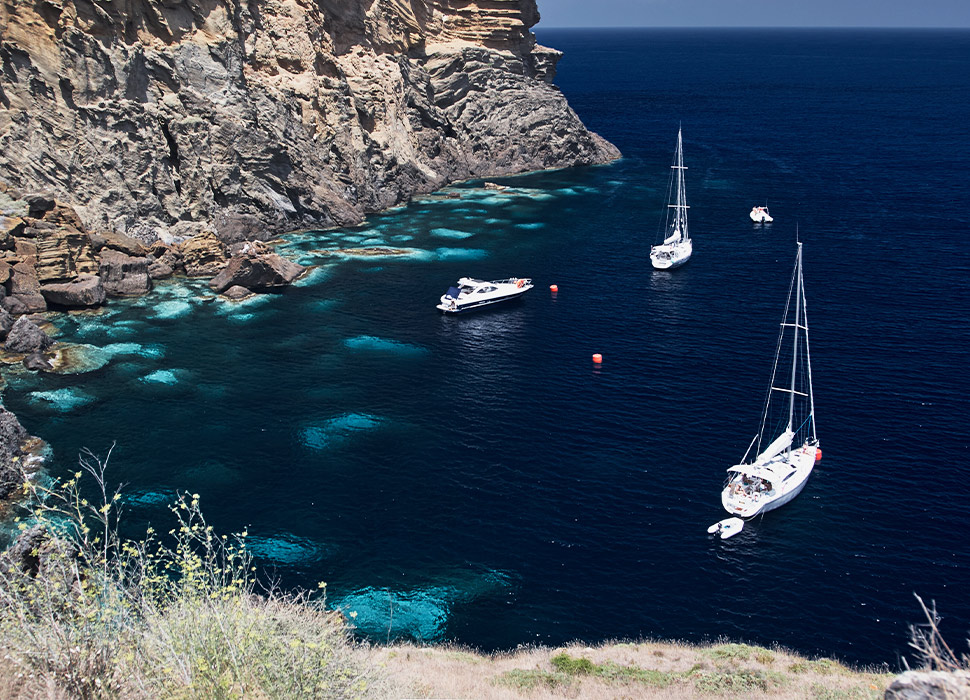 Around 50km off the north coast of Sicily, tiny, broadly unsung Ustica is part of the Aeolian chain, but often overlooked in favour of its splashier, more popular Tyrrhenian Sea siblings further east. Which is mad because, like them, it’s stunning – expect wild, remote hikes along well-kept coastal paths, and some crazy-blue coves (including Piscina Naturale, a natural rock pool on the island’s south-west coast close to Punta Cavazzi lighthouse). Oh, and, given its marine reserve status, there’s also some of the most rarefied diving in the Med (hit up Blue Diving Ustica if you want to take the plunge).

1hr 30mins by ferry from Palermo 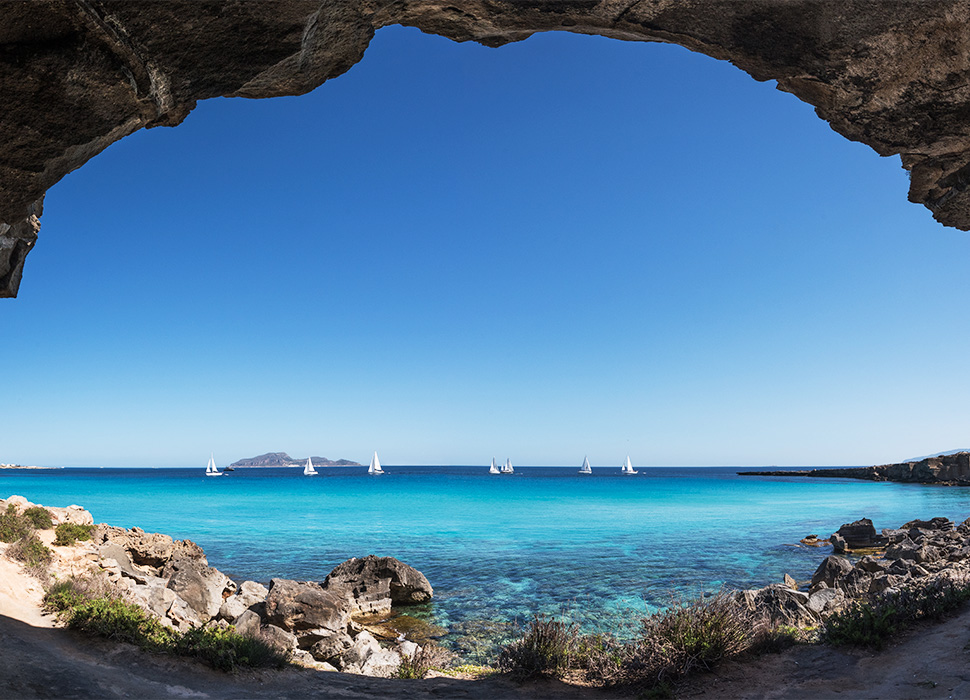 The largest island of the Egadi archipelago just off the north-west coast of Sicily (take a direct ferry from Trapani), butterfly-shaped Favignana has a pretty Old Town with a pleasing number of trattorias (definitely try at least one pasta dish with local bottarga). There are also some absurdly blue bays, including the epic Cala Rossa (yup, those pictures are real) and a totally flat western side that makes the perfect landscape to explore by bicycle. Take it slow, but wind up at Cibo Chiacchiere e Vino, a restaurant-bar with outdoor cabanas and easily the best sunset views on the island.

30mins by ferry from Trapani 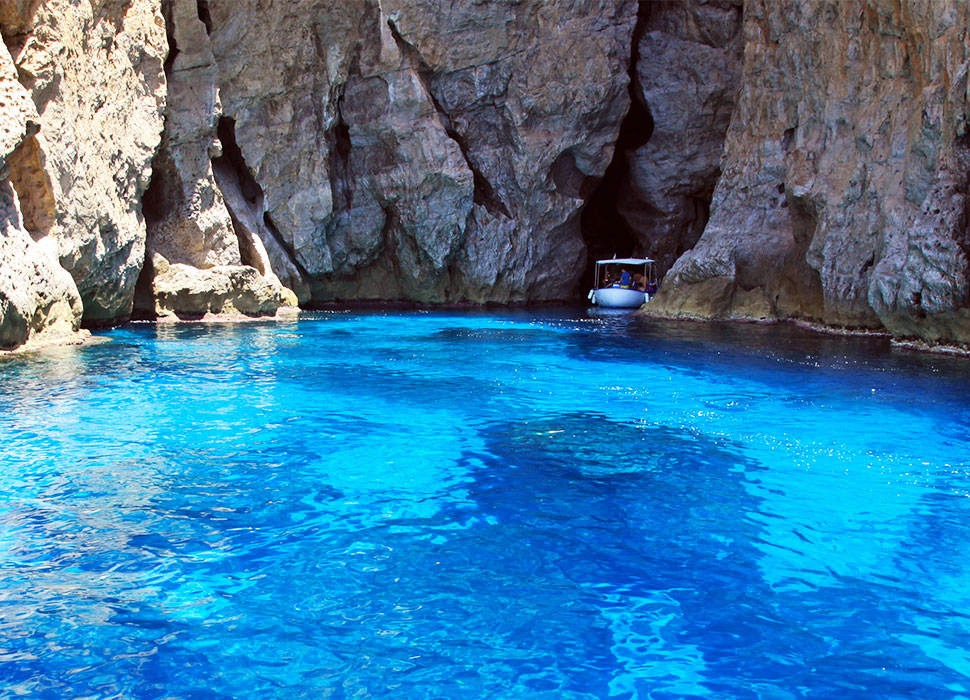 The Marettimo caves are a must-visit / Image: Adobe Stock

Repeatedly dubbed Sicily’s 'secret island', and for good reason – it doesn’t get a whole lot of press and, even in peak season, the Egadi archipelago’s tiny, back-in-time Marettimo feels happily lost to the world. Still an active fishing hub, there’s a couple of restaurants and some secluded bays for swimming, but its bigger draw might be hiking. Take the coastal path to a Norman castle set on an isthmus on the north-east coast, or take the well-signposted route up the 686-metre-high Monte Falcone, where the Tyrrhenian Sea is never out of view and the day ends come spritz o’clock at friendly Caffè Tramontana.

1hr by ferry from Trapani 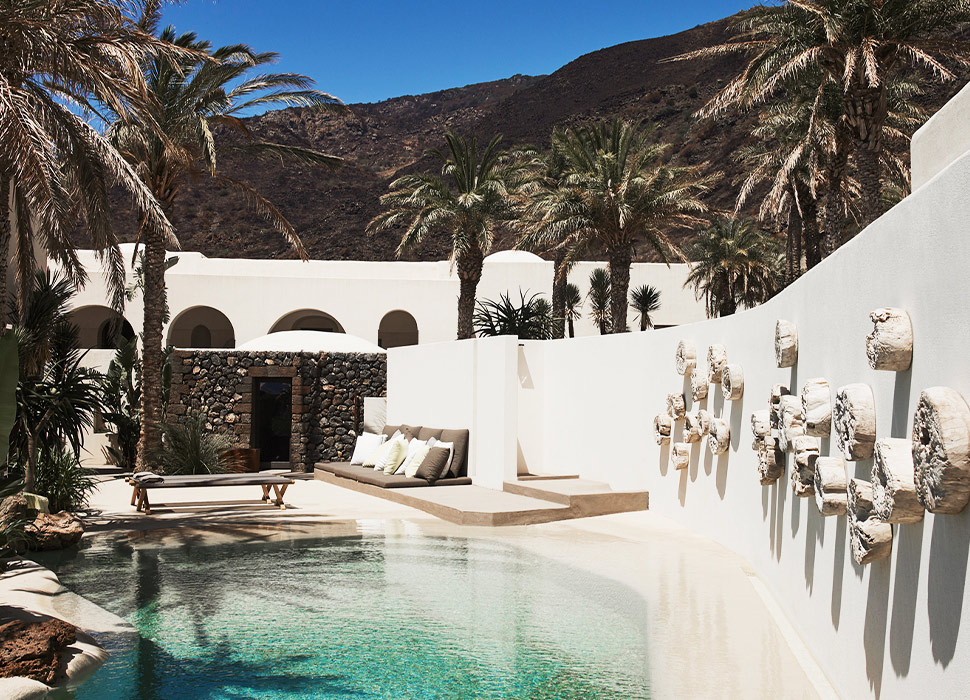 While director Luca Guadagnino’s 2015 movie A Bigger Splash inspired a wave of first-time urban escapees to make the schlep to Sicily's largest offshore island, it still feels remote and undisturbed. The Sikelia Hotel has given the jagged landscape a new, swanky allure but, even so, Pantelleria is big enough to do any budget. Start with a morning mud bath at Lago di Venere, then head to Pantelleria Town for lunch and finish the afternoon at Balata dei Turchi, a hard-to-access, lava-rock bay on the island’s south tip.

2hrs 10mins by ferry from Trapani

These are the most incredible travel experiences of 2021