All Images by Kim Lightbody

Meet the village people of Sardinia

It’s open season in Sardinia, where locals throw wide their gates to share their way of life. We step through the threshold

All Images by Kim Lightbody

Sardinians are a tough bunch. Even the Roman Empire found the heartlands of this Mediterranean island too challenging – they called it Barbagia, ‘land of barbarians’, a name that lives on today in its mountainous interior region – and went off to conquer somewhere easier.

The mood in the mountains is a lot mellower now, but this bit of Italy moves at its own pace, with people who do things their own way. Their welcome is warmer than it was in Roman times too, and as the leaves brown and the grapes ripen, that mood turns festive. ‘Autumn in Barbagia’ is an ambitious event that grew from a simple idea to unite 32 villages and within it is the concept of Cortes Apertas, ‘open courtyards’. This was introduced a few decades ago to encourage residents to share their houses and gardens with others to showcase skills, flavours and fashions. 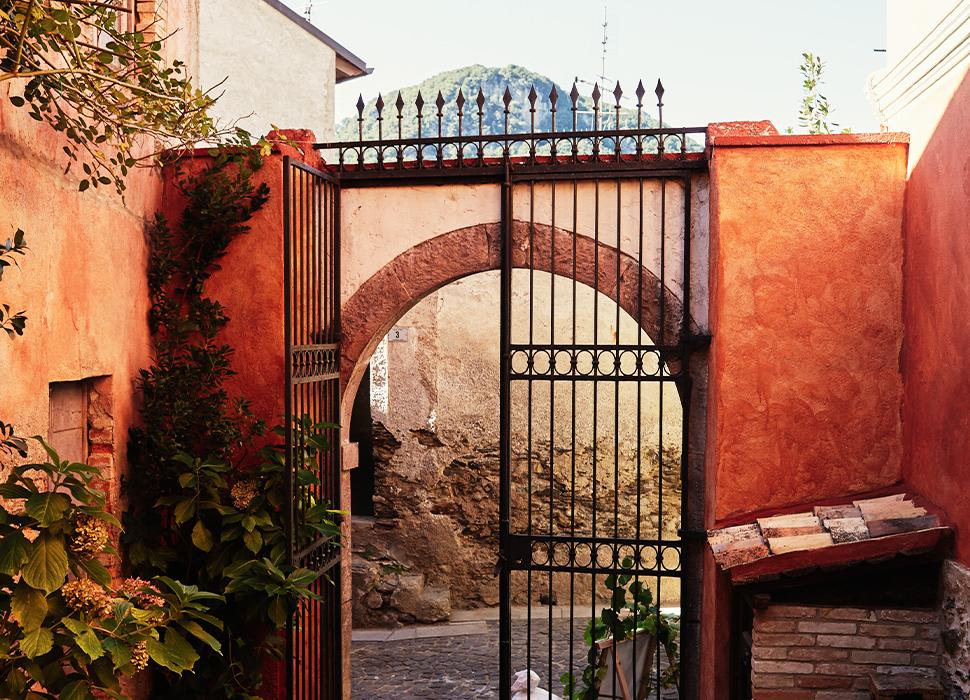 Now this three-month-long festival attracts visitors from across the world every weekend. It’s not a hard sell, though: as one organiser says, “People’s houses are usually open here anyway.”

The festival moves from village to village and in December 2019 I visited its final destination of Orune, a breathtaking mountaintop town. These are the local characters who welcomed me to their alluring, rugged and still slightly wild island. 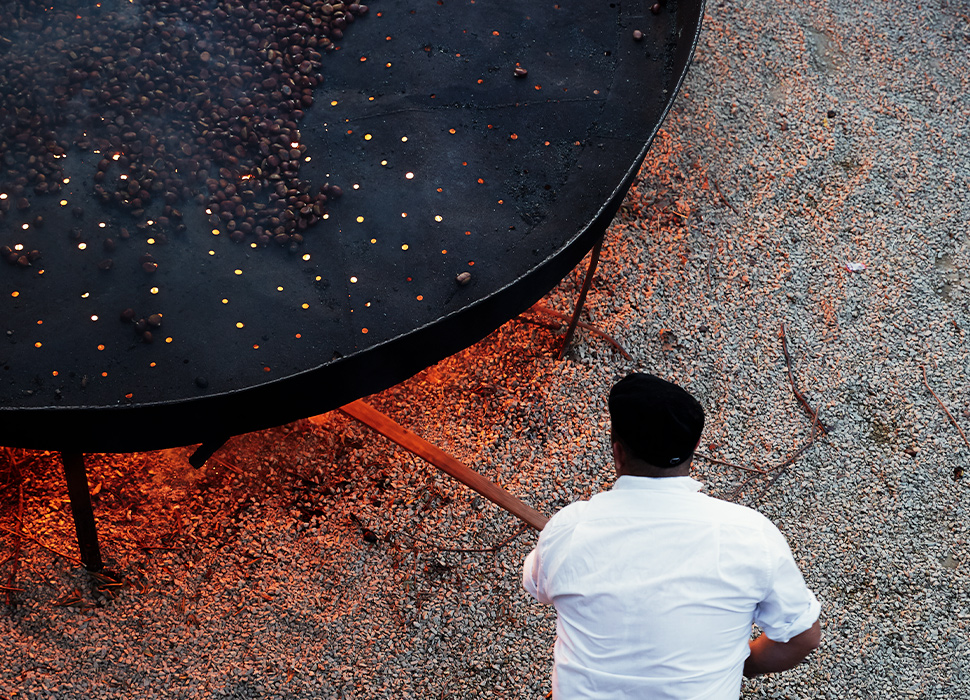 The food in Sardinia is lit

It came as no great surprise to Giampero Ortu when his son decided to enrol at culinary college. Cooking for strangers has become a family tradition, albeit for just one weekend a year. Up a cobbled side street in Belvì, their home-run restaurant is now a well-oiled operation.

“For 15 or 16 years we have opened our house,” says Ortu, leaning out of his window-turned-serving hatch. “The town asked the people here if we wanted to open our houses. Then, do we want to cook something to eat?” 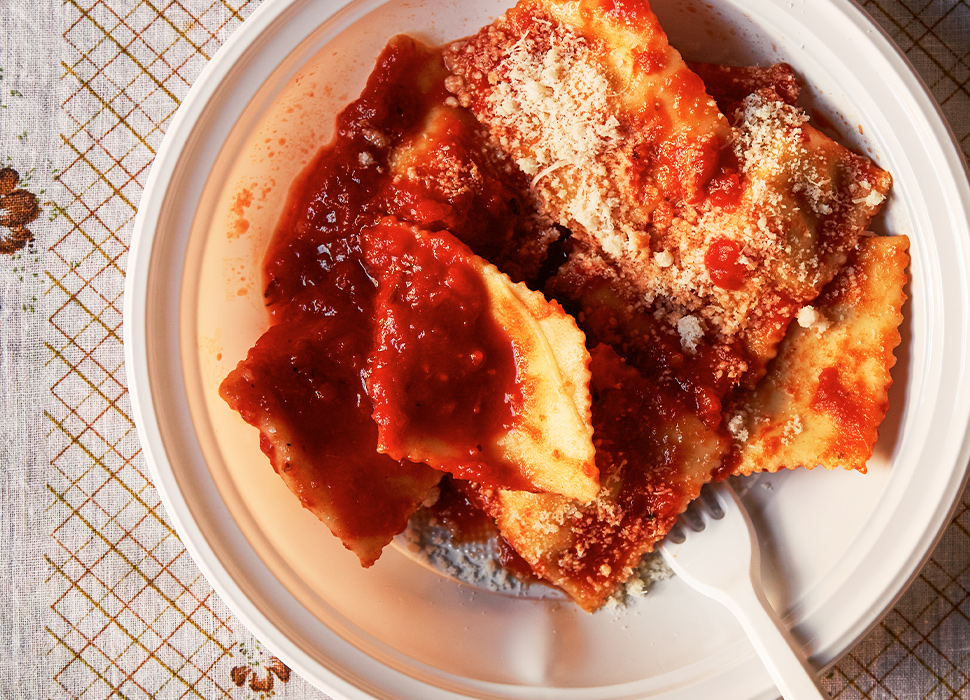 Their pop-up eatery is popular with everyone from older ladies to leather-clad bikers, both filling their garden benches on this sunny late-autumn afternoon. The whole family gets involved – the children serve while Giampero’s wife puts a sumptuous spin on the local ravioli: pecorino, potatoes, mint and saffron. Plate spotless, I got a taste of his home-brewed liqueur, mirto, which isn’t on the menu, but should be.

“First of all, we do this so that people understand the culture of the town,” says Ortu. Then he smiles. “And, also, we start to make a little money for our son.” 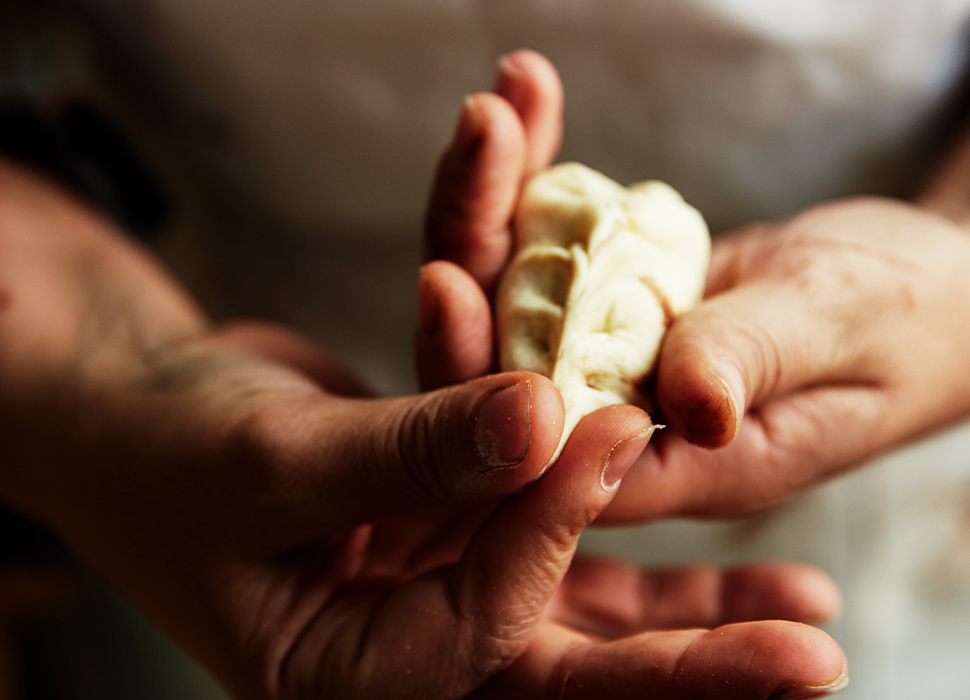 Barbagia’s mountain communities were hard to access until relatively recently, so distinct variations in language, customs and flavours remain. Pieranna Sanna is from Austis, a 10-minute drive north of where she has set up a makeshift kitchen with her husband in an unused shop in his native Sorgono. The big draw for visitors is seada, a famous Sardinian pastry filled with cheese and drizzled with honey, although the pair are making fried, filled bread when I arrive.

“Each of the villages has different peculiarities,” Pieranna says. “In Austis, we are farmers, so we have these with cheese. This village makes more wine. So…” With that she proffers a pork-and-wine fritter, fresh from the pan. It’s like a hot dog went to heaven. Then there’s a similarly tasty chocolate-filled chaser. This is hot work on a hot day, though. Why do it?

“For love!” laughs her husband, who’s beavering away behind her.

Which regional variation of seadas does Pieranna prefer? “They are used in different ways,” she says diplomatically. “In Sorgono, it’s a sweet. In Austis, it’s a starter, with potatoes and cheese.”

My translator, a well-travelled architect, looks thoughtful. “I only live a few kilometres from Austis,” he says, “and I had no idea they did that.” Open courtyards, open minds. 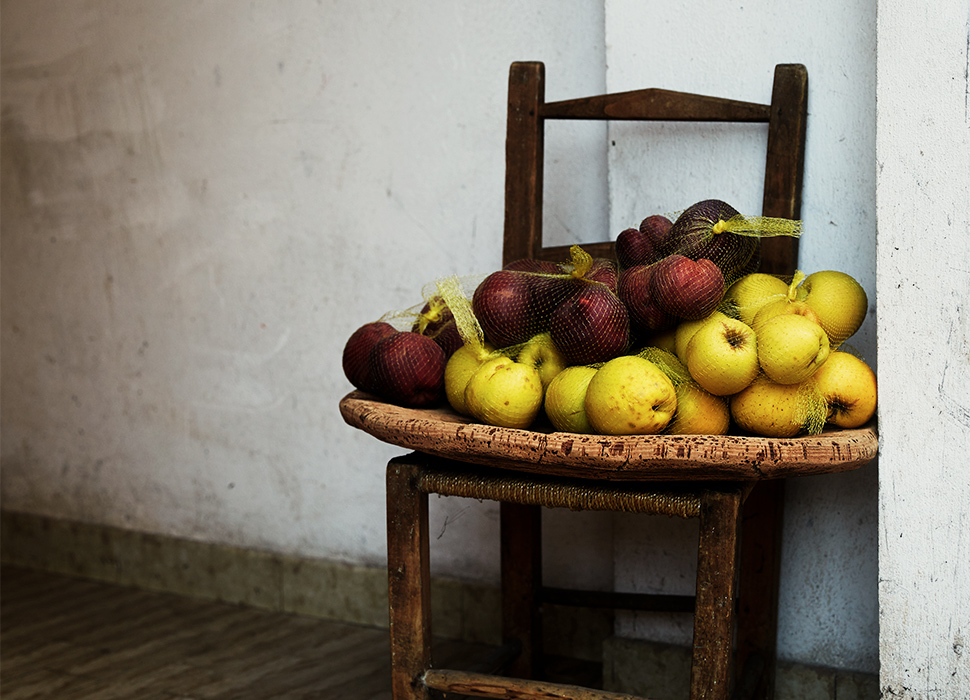 A corker of a fruit bowl

Sorgono is one of Barbagia’s most storied villages: DH Lawrence devoted several pages to its artisans in Sea and Sardinia. Today, visitors come for the local three-grape Mandrolisai wine and producers peddle their variations in the festival’s wine tent.

Giovanni Meleddu’s cork bowls and boards catch the eye, carved from the local sughero tree, but his prime passion is what fills the bottles. Why is Sorgono such potent wine territory?

“The terrain, the land, but mainly the weather,” muses Meleddu. “We are not sea level, we are in the mountains, so the grapes are aromatic. The grass, the vegetation around the grapes, is good for them.” And good for the people: the wine’s high polyphenol count is another potential reason for the locals’ famed longevity.

The Bell and Belt Maker

Remaining relatively vigilant is heartily recommended as you saunter along the winding lanes into Belvì. The high-road vistas are stunning, but beware the flocks of road-blocking sheep.

“That was my first job: sheep,” says the rugged Rinaldo Schirru, astride a stool on Belvì’s main thoroughfare, as he finishes a leather belt. “When I was a child, I started making things for my own sheep, then carried on. Now, for 15 years, it has been a job.”

Schirru’s stall is bedecked with leather and bells, made for both livestock and people. His busiest period is February/March, and the island-wide Carrasegare carnival, where the locals make elaborate masks and costumes strewn with bells, celebrating Pan-like goat devils.

“Every village has its own mask for it,” says Schirru, who is originally from San Basilio, further south. “I love going around Sardinia. This work also takes me to Italy and Switzerland. Of course, I spread the culture, but I am still a shepherd, so in the winter I sell cheese.” Sheep rustler, cheese hustler: that’s the village way. 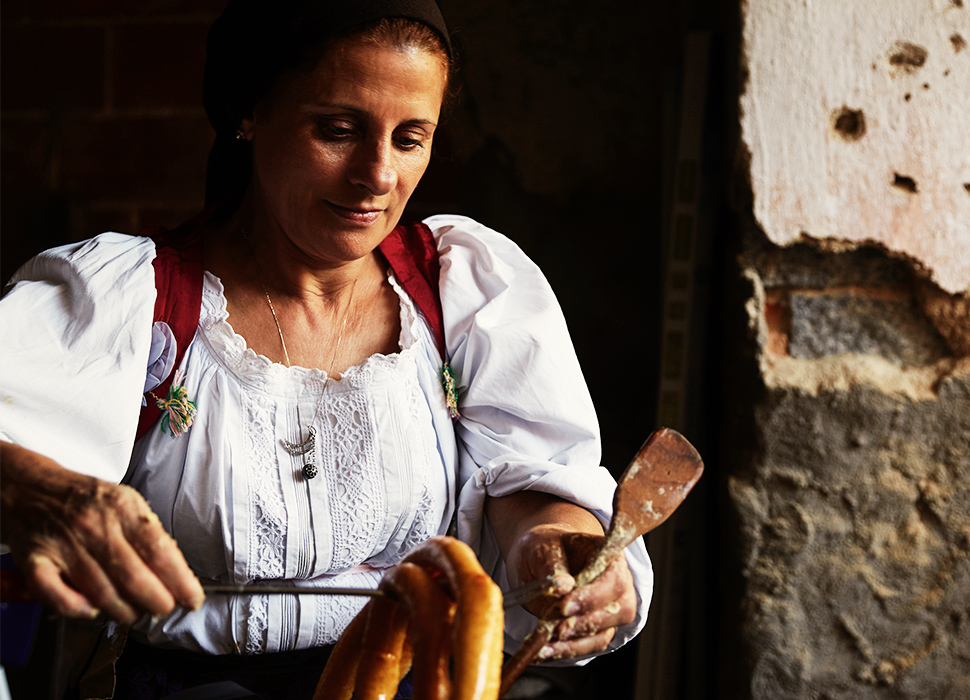 Barbagia’s three-month festival has evolved from the original ‘open courtyards’ idea and now brings a weekend street party to each participating village. Off Sorgono’s main street, Marianna Carta, who is sporting traditional costume, has borrowed a courtyard for a pop-up of her popular bakery, Su Tzicchi.

Several generations are on board. Marianna and her sister Giovanna are making what look like churros. “This is zippulasa,” she says. “In other parts of Sardinia, they call it something else and make it differently.”

"Is Marianna’s version the best?" I ask Riccardo, who is translating for me.  “I would have to say yes,” he says, then whispers. “She is the mother of my girlfriend…” 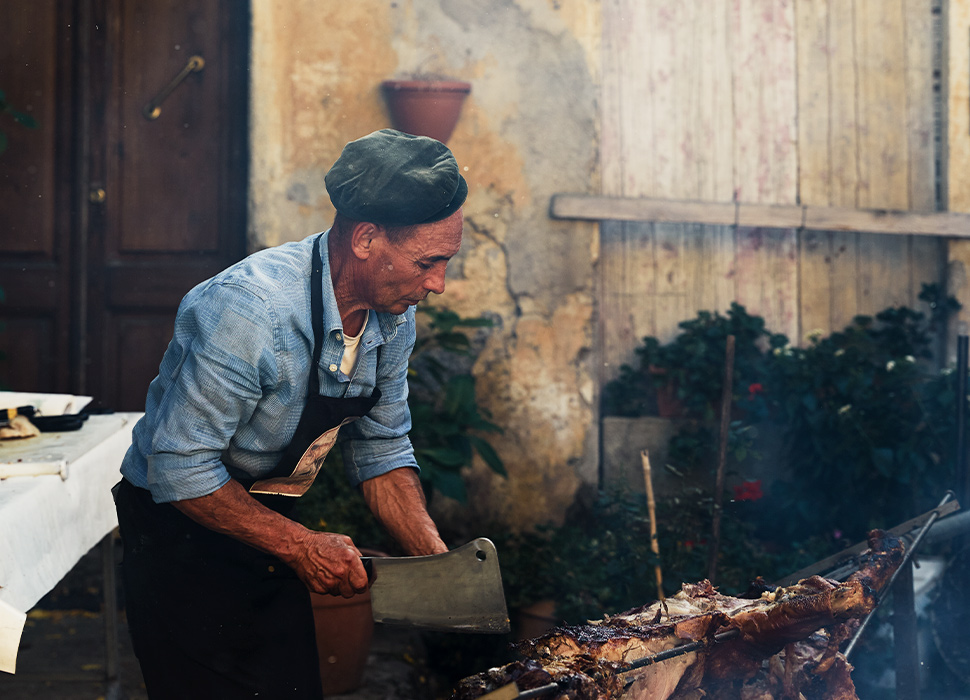 His partner and her father are selling the bakery goods at a stall nearby. Marianna’s Aunt Maria quietly supervises from behind the pan.

Zippulasa is a winter staple from October to January. We tend to think of these sort of doughnuts as Spanish, and Sardinia was ruled by Spain for 300 years, but “this type of cooking is from Morocco,” says Marianna.

Orange trees abound in central Sorgono and her zippulasa are pleasingly zesty. Is that her secret ingredient? Riccardo just smiles. Not everything needs to be shared. 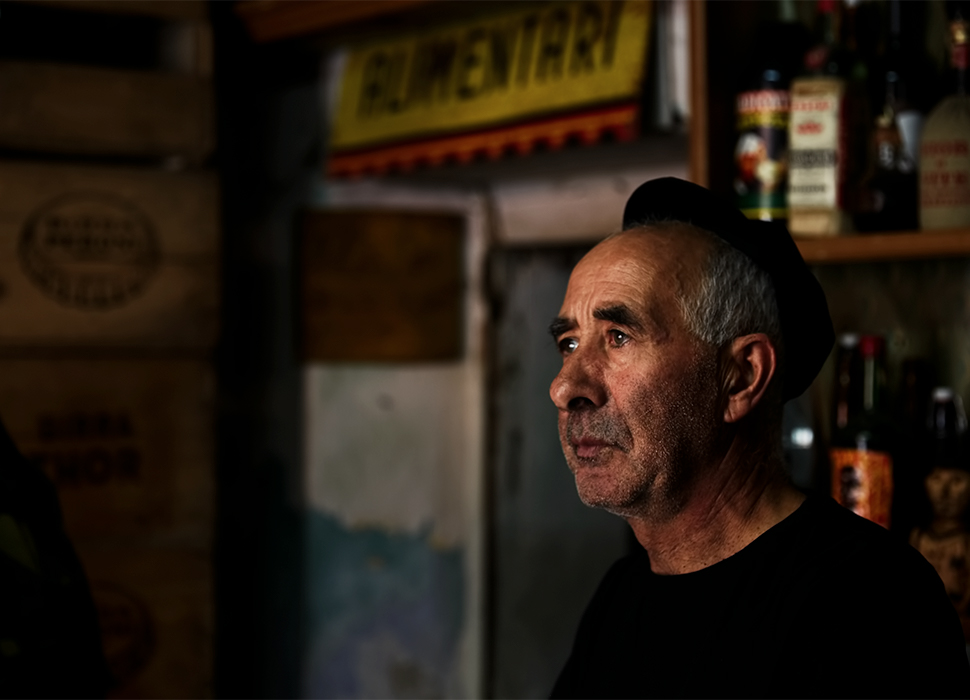 Sardinia is considered a ‘blue zone’ – a place where people live to a ripe old age. Could it be something to do with the particularly ripe cheese they eat?

“Only in Sardinia can you get this,” says Andrea Marotto, one of Belvì’s best-known faces. He runs one of this small but lively community’s oldest bars, Sa Buttega, plus a craft shop/museum directly opposite. “My wife makes cushions and traditional costumes,” he says, having donned one for the festival. “I am an iron-worker by trade.” And a raconteur by reputation.

After a quick tour, we’re confronted with the contentious concoction casu marzu. “It translates as ‘rotten cheese’,” Marotto says. “It’s very controversial. It’s not legal. It doesn’t respect the rules.” He explains the process: flies are encouraged to lay eggs in a pecorino cheese, which then softens as the subsequent larvae eat its fats. Tasty grub indeed. My host fortifies me with wine first, then offers the formaggio.

And… it’s actually perfectly agreeable, really quite subtly flavoured, if you can conquer those maggoty misgivings.

“People in Sardinia live to 100 years old: it’s the food we eat,” Andrea says. “No one here ever had any problem with casu marzu. Actually, some of the oldest people say it’s good for you – and an aphrodisiac.” 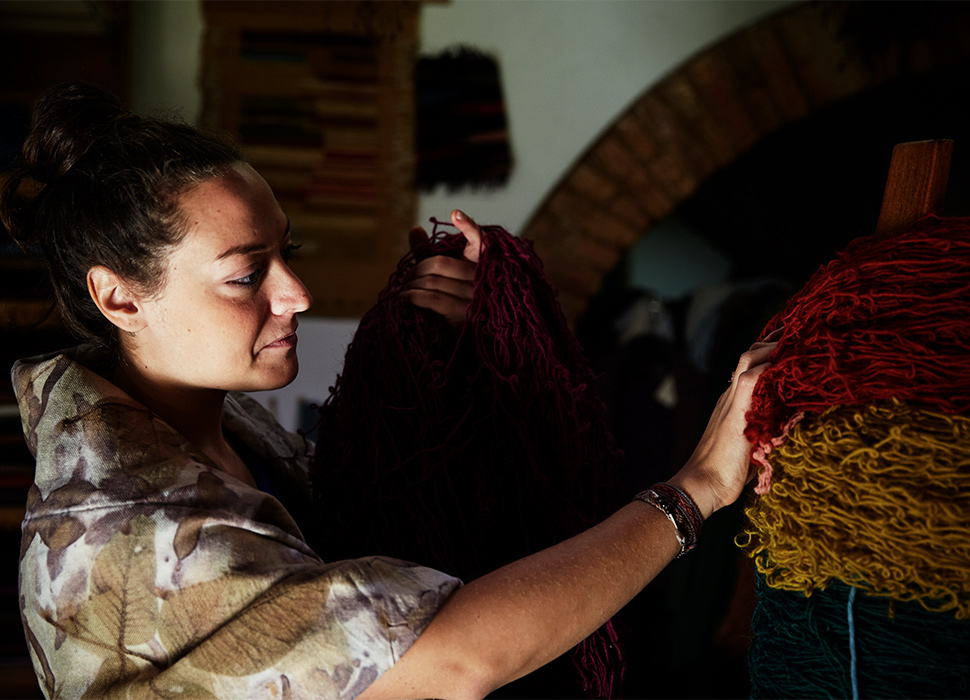 In sleepy Atzara, Federica D’Amato and Maurizio Savoldo’s unassuming high-street ‘laboratory’, as they call it, contains vats of dye, albeit good, natural stuff.

D’Amato holds the fort at home while Savoldo mans a stall in Belvì. The couple pick local flora, soak it for days, then dunk in woollen clothes. “As far as we know, we are the only people still doing this,” says D’Amato.

Their company, La Robbia, started in 2005 and came about through Savoldo interviewing veteran Sardinian clothes-makers and being moved to keep the tradition going. “Before the Industrial Revolution, they only dyed with natural colours,” says D’Amato. “Our entire goal is to continue this.” 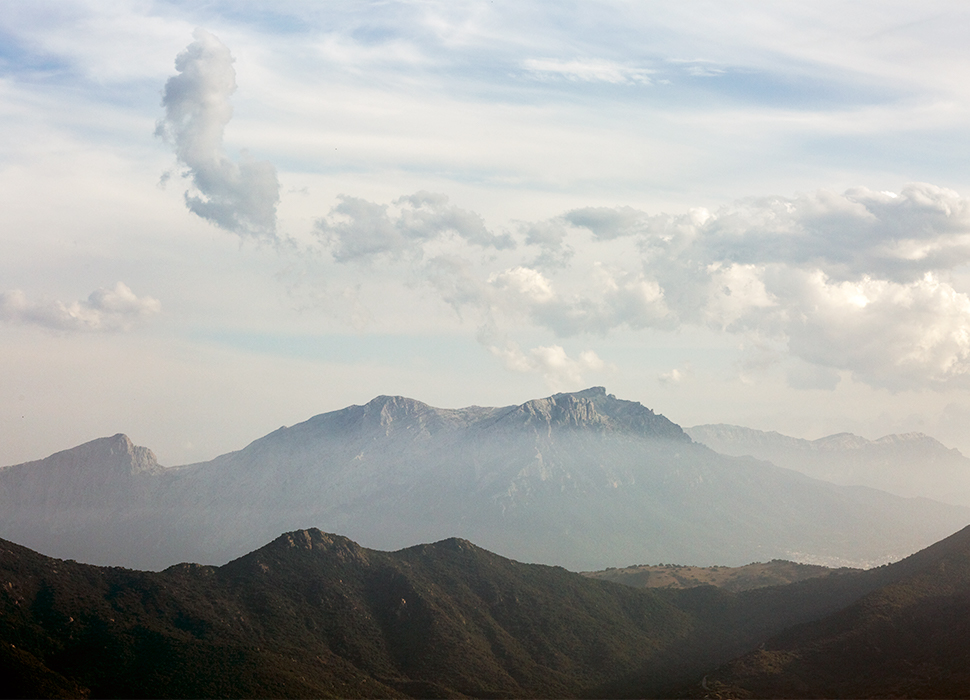 Sardinia has a breathtaking landscape

It’s a romantic novelty in many countries over the festive season: chestnuts roasting on an open fire. In Belvì, though, the process was always more important.

“These get conserved for the whole winter,” says Lino Murgia. “You know you have chestnuts, even if everything else fails.”

We meet Murgia on the main street, working a lovely old device, a sort of nut-filled tombola. Ask him what makes Belvì special and there’s a grand sweep of his arm towards the distant, green-fringed mountains. “The panorama, the landscape,” he says, “the chestnut and hazelnut trees.”

Belvì was once Barbagia’s main town. Now, just 600 people live here, but it’s bustling on this festive Saturday and the village is known as an Autumn in Barbagia highlight. “In this village, chestnuts are a part of life and part of a good diet,” says Murgia.

What does he do at other times? “A bit of everything,” he says. “Chestnuts are not always enough.”

The best hotels on Sardinia

The best restaurants in Sardinia

The best things to do in Sardinia