Above ground, Matera is a charming hilltop town. Below ground, it holds a secret history. We follow in the footsteps of the world’s most famous spy and gets under the surface of the most intriguing city in Southern Italy

“In Matera the roofs are streets, and the streets are roofs,” says local guide Giulio Cappella, which sums it up nicely. Behind him, a vast, topsy-turvy backdrop of churches and canyons, streets and homes, carved into a honeycomb hillside. We quickly discover that a smartphone cannot do Matera justice. Hollywood film crews are still trying.

One of the world’s most ancient sites, Basilicata’s ‘Subterranean City’ is built around a crop of paleolithic cave dwellings (Sassi, meaning ‘stones’), dating back as far as 7000 BC. A UNESCO World Heritage Site, the Sassi housed thousands of people right up until the 1950s, when the government declared them unfit for habitation – disease-ridden, poverty-stricken, archaic. For years, the caves sat empty.

Feeling filmic? Find a world of cinematic magic in the shadow of Morocco's Atlas Mountains. Or if that's a bit of a schlep, why not take a cinematic tour of Rome instead? 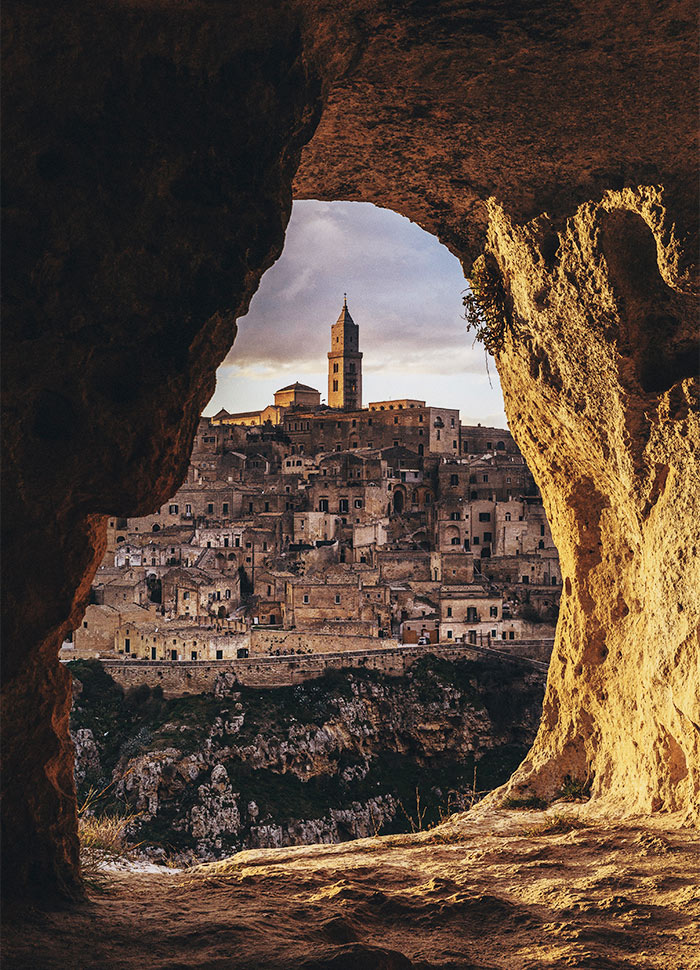 The evening sun strikes the spire of the Cattedrale di Maria Santissima della Bruna e Sant'Eustachio, illuminating one of dozens of ancient cave dwellings that look out over the town

But gradually, over the past two decades, life has trickled back in and the Sassi’s lights have come back on. Now hotels and AirBnBs are spawning at pace, nightlife is swinging, and the city once branded “the shame of Italy” is becoming a star attraction; first as the European Capital of Culture in 2019, and now as the setting for this month’s hotly awaited James Bond installment No Time To Die. After years of pretending to be Bethlehem or Jerusalem in big-screen biblical epics, this is the first time the city will depict itself. Matera is ready for its close-up. 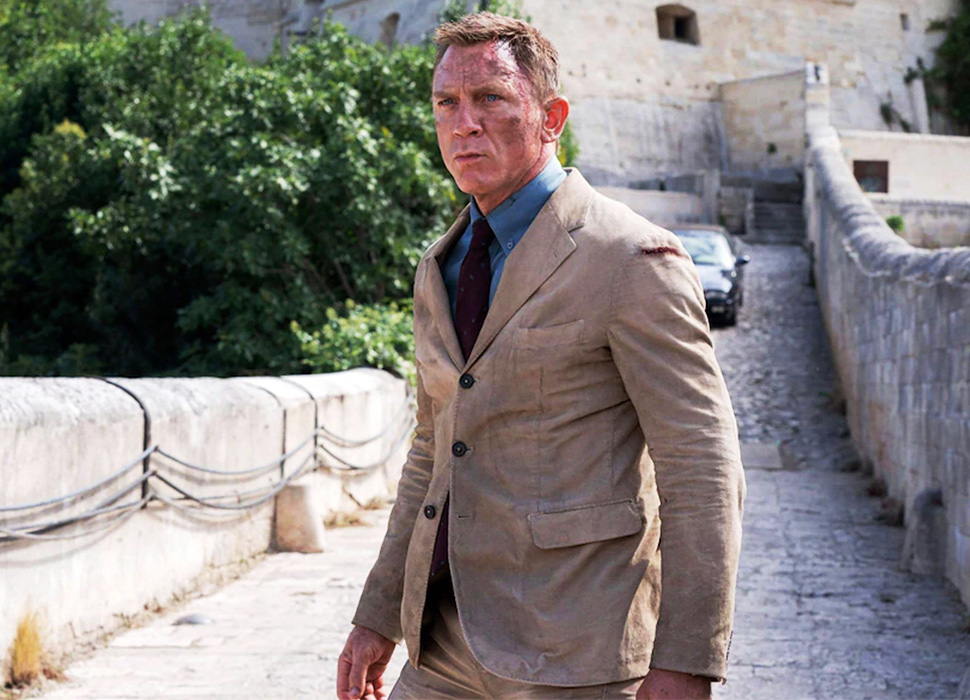 James Bond having an invariably stressful time in Matera, from 'No Time to Die' / Image: Alamy

Mystery and intrigue have been at home here since long before 007 burned his Aston Martin down the Via Del Corso. “Matera is small,” locals shrug, and yet it has an inexhaustible quality. The winding streets play tricks on the mind. Landmarks that looked to be miles away will suddenly loom up in minutes. Things aren’t ever quite where you remembered them being, and the same besuited stranger will appear around every corner, like a glitch in the holidaymaking Matrix. Explore for weeks and there will still be nooks and crannies left to discover; a hollowed-out chapel, a ceramics boutique, a speakeasy that looks like a Fellini set. Empty streets are filled with disembodied piano, floating on the breeze through open windows. 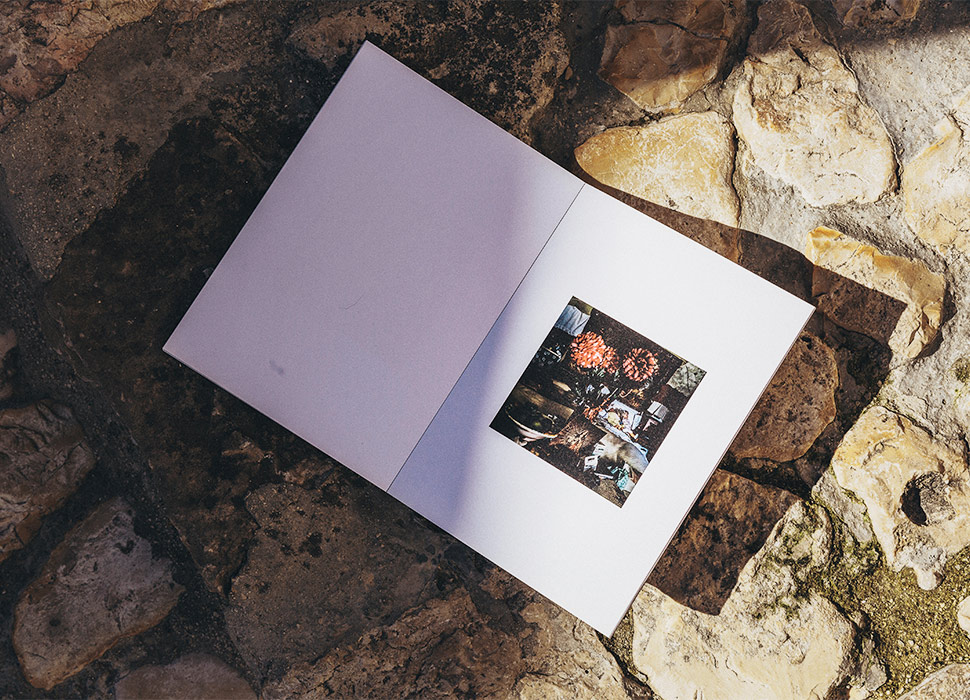 Art simply happens here, too. At Caffe Tripoli, a dark, glinting galley of a coffee bar, we meet Mariano Silletti, a local policeman and award-winning photographer, who began combining his work and his hobby while investigating the sudden disappearance of a man in a nearby village. Ever since, Silletti’s brooding images have dug deep into the stories he uncovers on the beat. “At a certain point I realised that street photography wasn’t enough for me,” he says. “I felt the need to investigate more.” 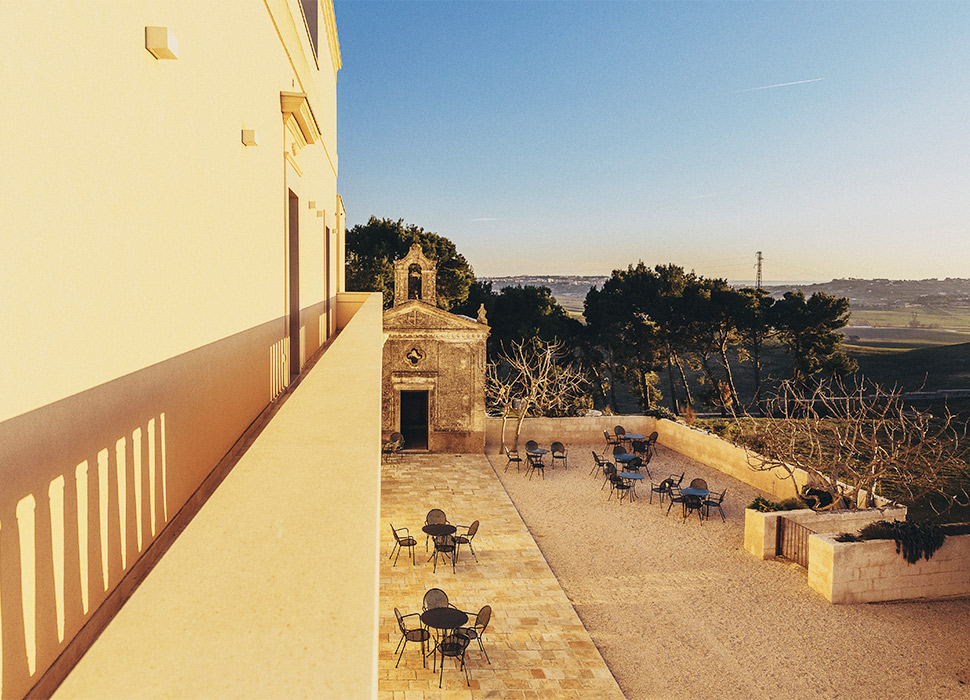 A few kilometres outside the city, a blood orange sun is setting over Masseria Fontana di Vite, a boutique hotel that wouldn’t look out of place in a John Le Carré adaptation. The cool white cube of an 18th century manor house is set in acres of undulating farmland, where horses roam, lentils grow, and co-owner Fausta Bolettieri has been hosting an artists’ residency programme since 2018.

The results are a delicious old/new world collision. “I like that the artists leave traces of themselves everywhere,” she says. Above the coffee table, Canyon Castator’s painting of Renato, the family donkey. Inside the old chapel, a ceiling of psychedelic flowers daubed by artist Austin Lee, and a box sculpture depicting the murder of the tyrannical Count of Matera in 1514. Fausta’s artists are inspired by the legends of the region, and by the gilded landscape itself. “The colour of Matera is really special,” she says. “It’s creamy, gold, amazing.” 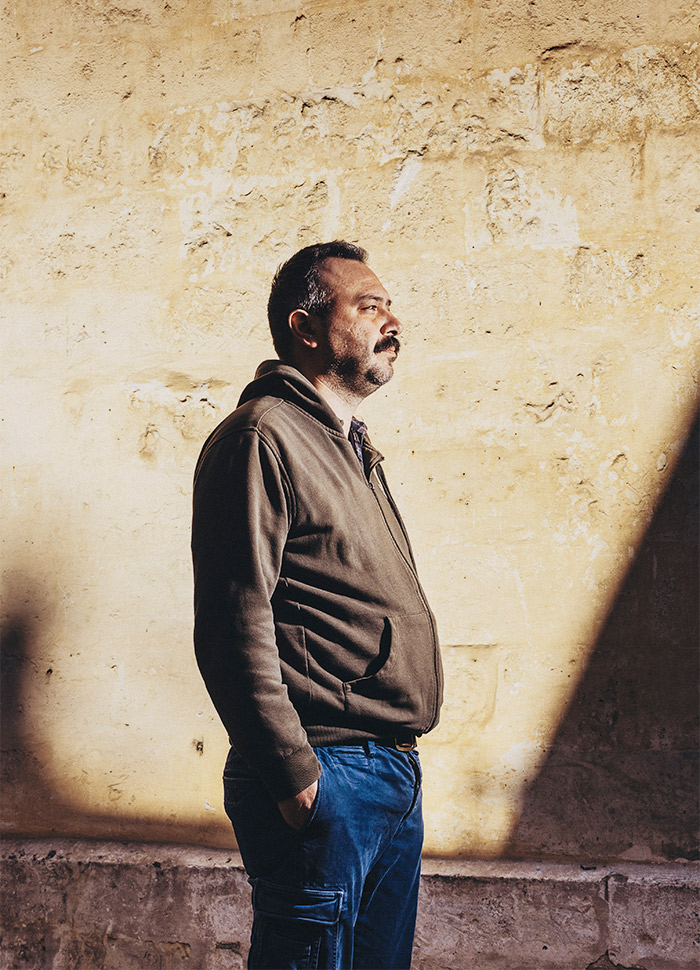 Meanwhile, the gilded labyrinth of the Sassi is filled with workshops – although rents were lower before the “2019 money”, as it is drily referred to among locals, came to town.

“For artisans, a little community has been created in Matera over the last 10 years,” says Raffaele Pentasuglia, a fourth generation artist whose papier-mâché and clay work is a contemporary twist on Catholic and pagan folklore. His bestellers are sculptures of monachicchio, impish figures said to guide people to hidden fortunes.

Every souvenir here has a story. There are the chicken-shaped cucù whistles, which have been carved in the region to ward off evil spirits since 400BC. Wooden bread stamps, now curios for visiting foodies, were once a crucial tool for distinguishing each family’s loaf in the giant communal ovens of the Sassi. 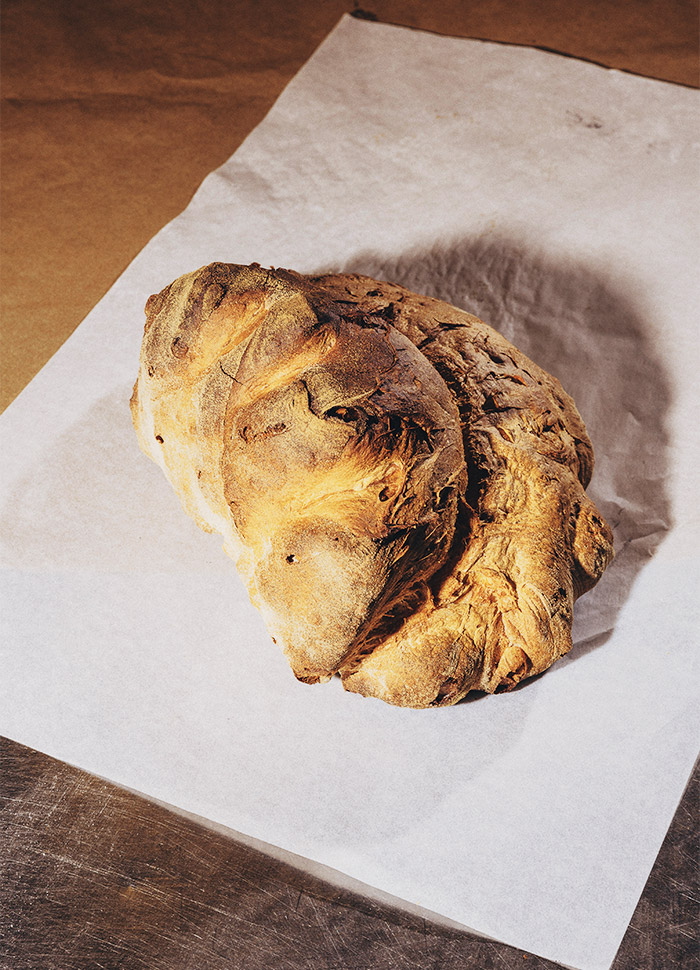 A loaf of 'pane di Matera' from Il Forno de Gennaro, one of Matera's oldest bakeries

Which leads us to Il Forno di Gennaro, an acclaimed bakery run for generations by the Perrone family, where the air is sweetly yeasted and glossy wheels of stuffed focaccia call to us from behind the counter. The bakers begin at midnight, working seven days a week to produce the city’s iconic loaves. Semolina gives the moist crumb its Midas hue, while customers can choose between wood-fired or electric ovens, and several degrees of chewy crust.

But it’s the shape that really sets Materan bread apart. A great stegosaurus hump of a loaf; gnarled, golden, cut into three rocky peaks. These represent the Holy Trinity, but they could easily be a tribute to the gnarled, golden landscape of the old town itself: Sasso Barisano to the north, Sassi Caveoso to the south, and Civitas hill rising majestically between them, crowned by its Romanesque cathedral.

“When people are very poor they become religious and superstitious, because they don’t have anything else to cling to,” says translator Claudio Latorre, who grew up a few doors away. “At one time, bread and religion were all Matera had.” 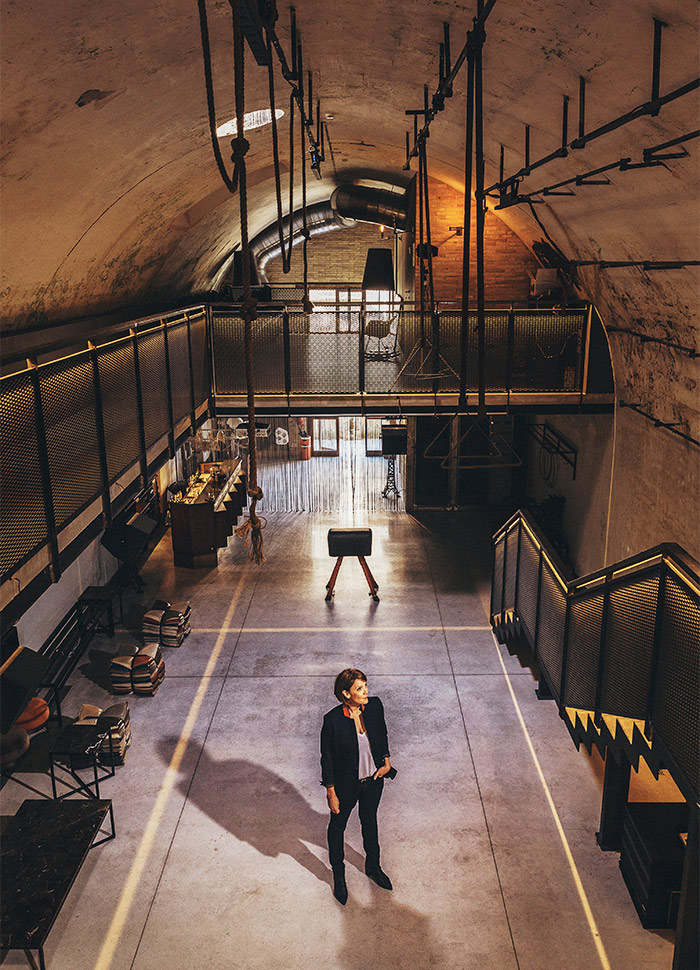 No surprise, then, that both are everywhere. More than 150 rupestrian churches can be found across Matera; opportunistic grottos, chipped out of the rock and decorated with ancient fresco paintings. Stale bread, meanwhile, is found in the region’s signature pancotto soup, cialledda salad and fried ‘bread balls’ in tomato sauce, a decoy from times when meat was scarce and not a crumb could be wasted.

Thankfully, modern Matera has a little more decadence on the menu. Especially at Area 8, the glamorous bar/restaurant/arts space owned by dynamic entrepreneur Mikaela Bandini. Named after the part of the brain responsible for handling uncertainty, it was born as a happy accident – Bandini held a spontaneous drinks party in her office one night, and it escalated quickly. “Sometimes the most incredible things happen when you have absolutely no control over them,” she says, summoning up more cocktails. 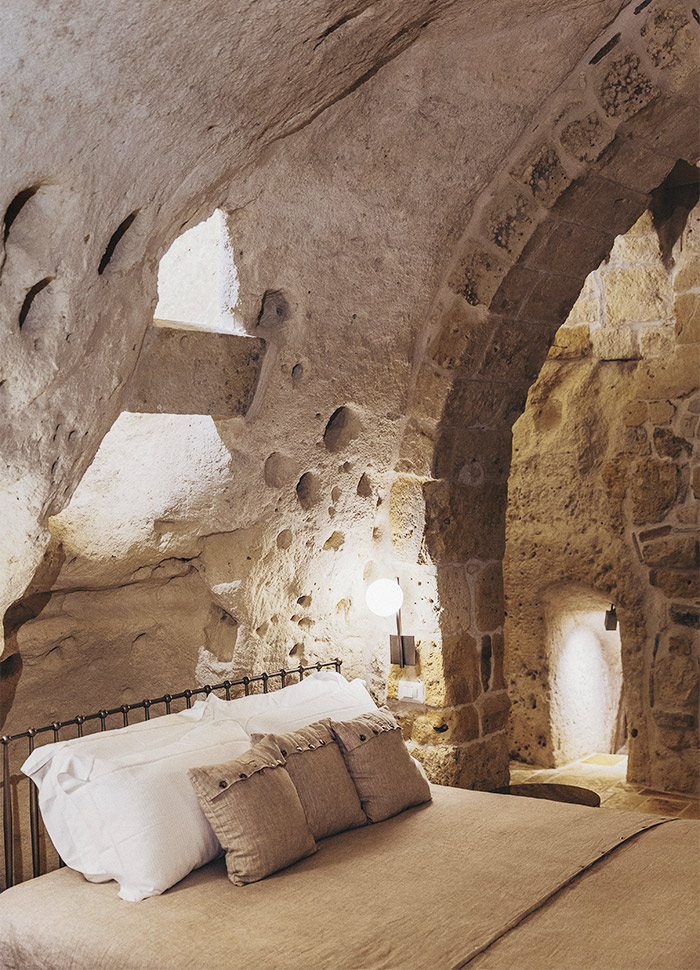 A bedroom at Cenobio Hotel, built in a network of caves in Matera's old town

Now Area 8 is a space to rival gin joints in Shoreditch or Kreuzberg, furnished with salvaged theatrical scenery, and peopled with an eclectic cast of characters. In recent years Bandini has helped coordinate Sofia Coppola’s wedding, hosted a birthday party for Joaquin Phoenix, and worked as a liason for the Italian Secret Police. At the next table, she points out the owners of Cenobio Hotel, a luxury cave restoration which recently hosted members of the Bond entourage. “I’ve got all the secrets, I know them all,” she says. I believe her.

Bandini’s is an unlikely tale itself; originally from Capetown, South Africa, she moved here 28 years ago after falling in love with a man from Matera. “The first time my mother came over, she said ‘what the hell are you doing here?’ It was a completely different place.” The marketeer used to travel all over, but these days she can be found nurturing homegrown projects – such as Palestra, a converted 1980s gymnasium that now functions as a hip venue for local and visiting revellers. “The world comes here now,” she says. “Let’s take advantage of that.” 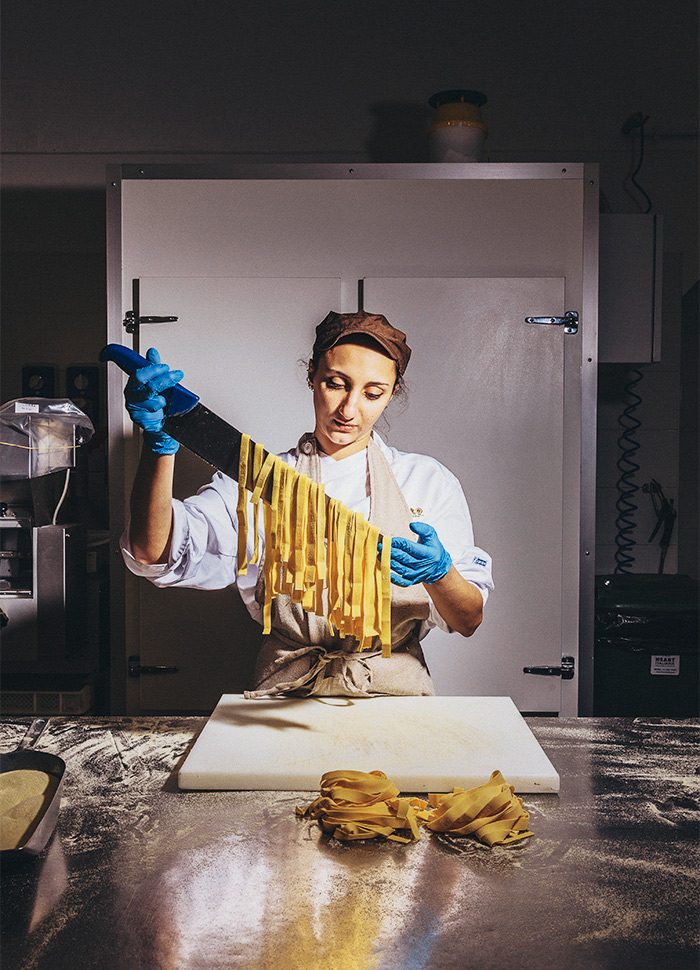 Fresh pasta is prepared at Kapunto

Like all cities in the grip of a rebirth, locals are in two minds about change. “Things are happening so fast for Matera; we have to digest everything,” says Tommaso Perrucci, chef-founder of Kapunto, a fresh pasta shop and dining spot, loomed over by the sturdy turrets of Castle Tramontano. Rejoicing in what Perrucci calls “that timeless dance” of pasta craft, with an open kitchen where customers can watch sheets of silky dough being cut and shaped by hand, Kapunto is gently pushing against the tide of tradition, with dishes like passionfruit and mascarpone ravioli – guaranteed to raise an eyebrow among purists. “To change a mentality needs at least three generations,” he grins. “It takes time.”

“I would describe Matera like sparkling water,” says Rita Orlando, an architect and part of the committee that oversaw the area’s transformation as 2019 European City of Culture. The challenge now is to maintain that effervescence without risking the purity of life here. “This is really a resilient city. It has reinvented itself many times, and found ways to adapt.”

Ultimately she says the power lies not with Hollywood but Materans themselves, who have been carving out their own legacy for millennia. “A place is not just architecture,” she adds. “A place makes sense if you know the story behind it.”