In the hills of Tuscany, life is pasta and pasta is life. especially in May, when the Italian region’s favourite ‘pici’ pasta is celebrated in a 50-year-old festival. But can carbs can keep the community together for another 50 years? 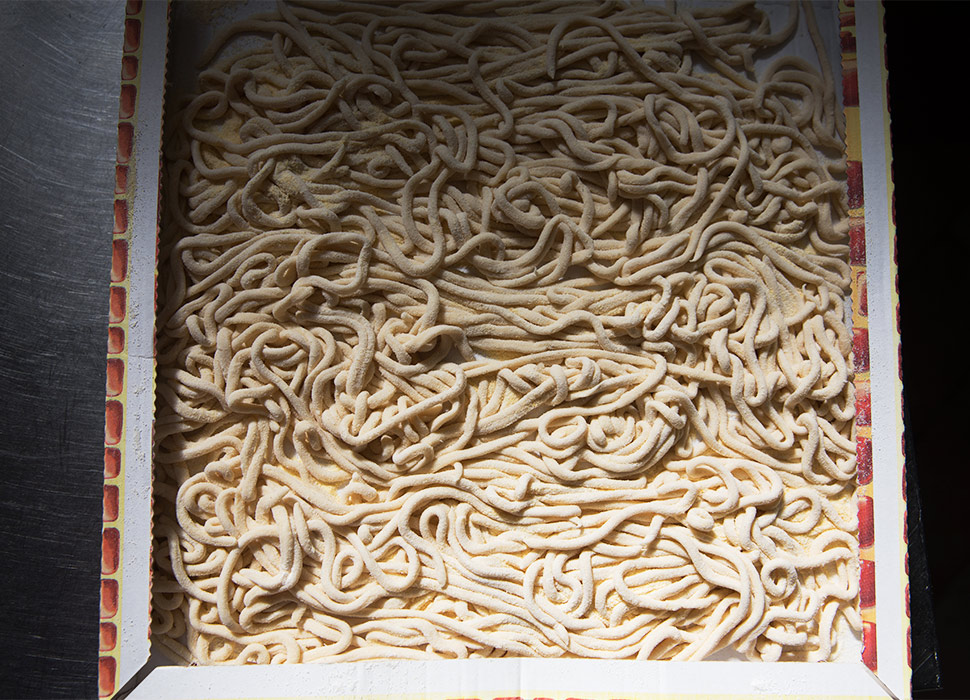 It’s a Saturday morning and the tiny, tidy Italian village of Celle sul Rigo is deserted, looking like a doll’s house that’s lost all its toys. But just as I step foot in the piazza grande, it turns midday, the church bell tolls loudly above my head, and a small collection of local residents appear to greet me with smiles and handshakes.

Thousands of visitors flock to the narrow streets and this square in Celle once every year – partly for this hospitality, but mainly for some pasta. But pici (pronounced ‘pee-chee’) is no ordinary carbohydrate. It stands out for its simplicity in a country known for golden, glossy, egg-based pasta dishes. For the residents of the village, it’s their lifeblood. Each year since 1969, on the last weekend of May, they have hosted the Sagra dei Pici, serving up countless steaming bowlfuls of it. As they celebrate the 50th anniversary of this annual festival, and the population of their village continues to dwindle, they want you to come and try it too. 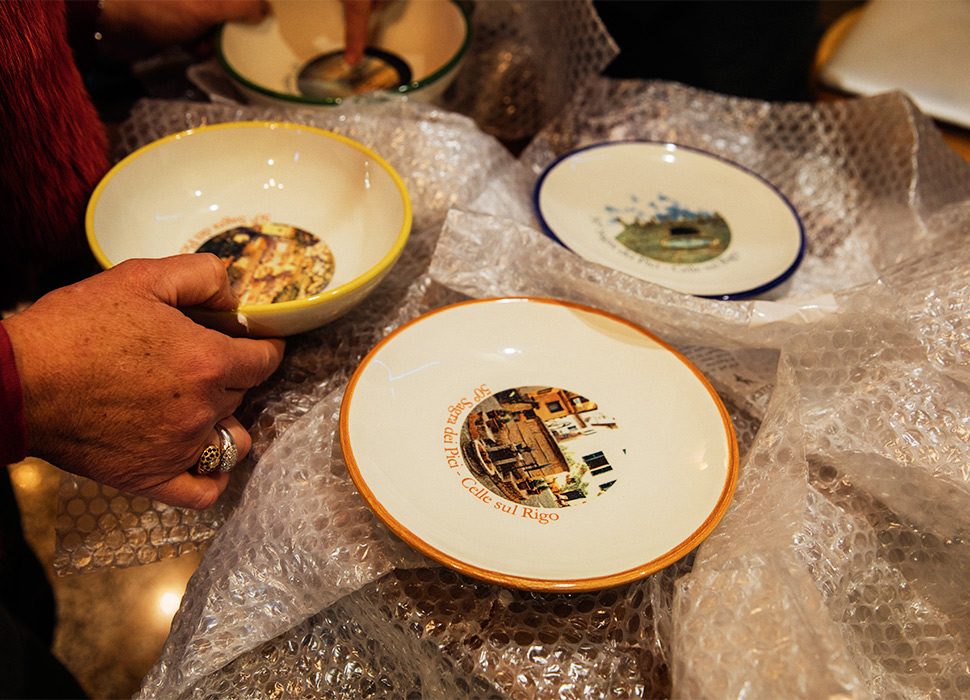 Souvenirs of the Sagra dei Pici

Pici is an ancient tirati a mano (handmade) pasta, dating back to the Etruscans, who made it using only flour and water. Now made with the addition of extra virgin olive oil, and sometimes a dash of egg, it’s described effusively by the area’s tourist board as “laces of flour and water connecting Val d’Orcia’s hamlets of Pienza, Montepulciano, Monticchiello, Montalcino, the borders of Umbria along the Val di Chiana and climbing the slopes of Amiata”. Being so intimately tied to the region, its story tells us a lot about Italian cuisine and culture.

To me, it tastes like heaven on a plate. Thick as a pencil, firm and slightly chewy, it’s a long-lost cousin of the udon noodle – with ridges and indentations in the dough to capture a rich all’aglione sauce (garlicky tomato) or an indulgent cacio e pepe (cheese and black pepper). It’s boiled fresh for only a few moments, until it floats to the top of the pan. When it’s served, it somewhat resembles a chunky, wriggly worm. 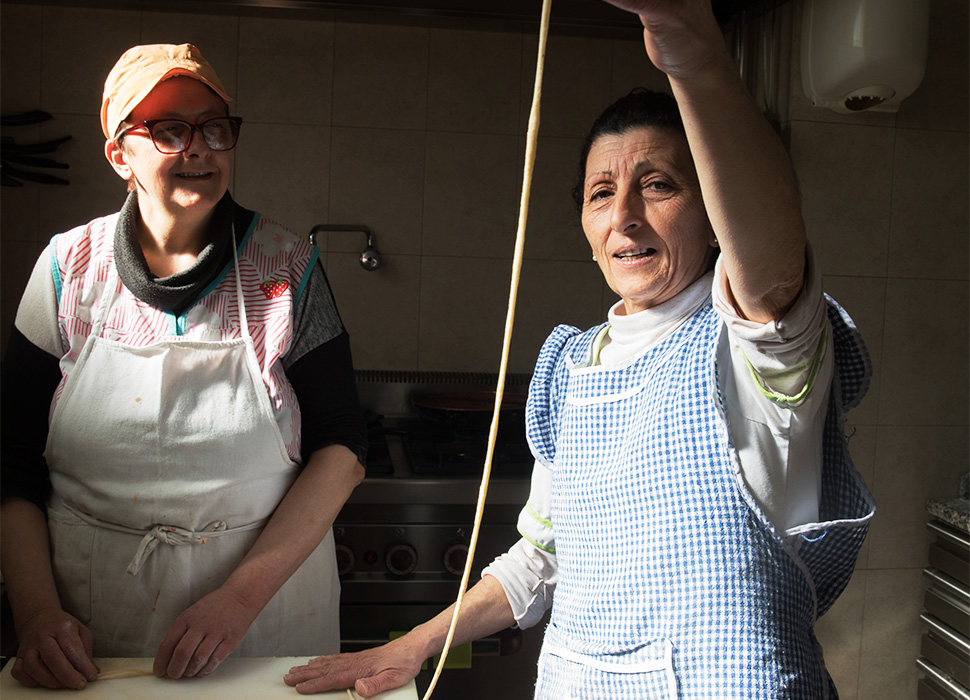 Pulling the pencil-width pici to shape

The first time I tried pici was at Padella, a popular, affordable, hipster-turned-tourist pasta restaurant in London, which comes with constant queues. But while Padella might until relatively recently have been one of the only places you can try the dish in the UK, pici is picking up elsewhere. Pasta Grannies is a viral YouTube sensation with 733,000 subscribers, in which the host, Londoner Vicky Bennison, meets adorable pasta-making Italian nonne. Locals in Celle tell me that Vicky even stopped by a couple of years back to film an episode.

“Pici was a poor dish that everyone could make,” says Alessio Banini, an anthropologist and journalist who has been working since 2017 to get pici recognised by UNESCO. “Big families of as many as 20 people used to make it all together – women, men, old and young – so this is a tradition of our land.” 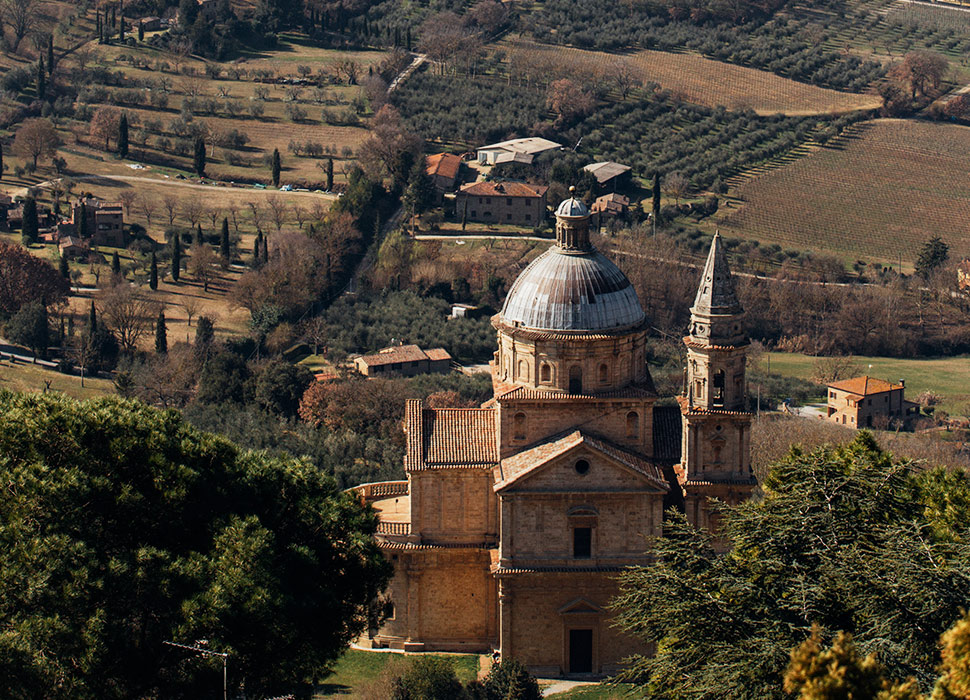 The church of San Biagio, Montepulciano

I’ve driven an hour and a half from Rome to the medieval, sandstone hilltop town of Montepulciano – in the heart of pici land – to meet Alessio, a cheerleader for the festival.

“I studied the land of this area, where my grandfather worked 50 years ago,” he says, as we sip on Vino Nobile and munch taralli crackers in a sun-splashed courtyard. Hand-rolling pici is a Sunday tradition for families here, Alessio explains. “It’s not just about pasta-making,” he says, “it’s a social activity of telling stories and passing down oral history.” You won’t hear it in local restaurants, but you absolutely will at the annual festival.

“People who lived in Celle and emigrated all over the world now come back for the festival, and talk about the other cities and their new lives,” says Alessio. “They carry on the identity of the village and at the same time they teach others to make pici. It is a very democratic system. It’s the old women who know the recipe, but it’s not a secret.” 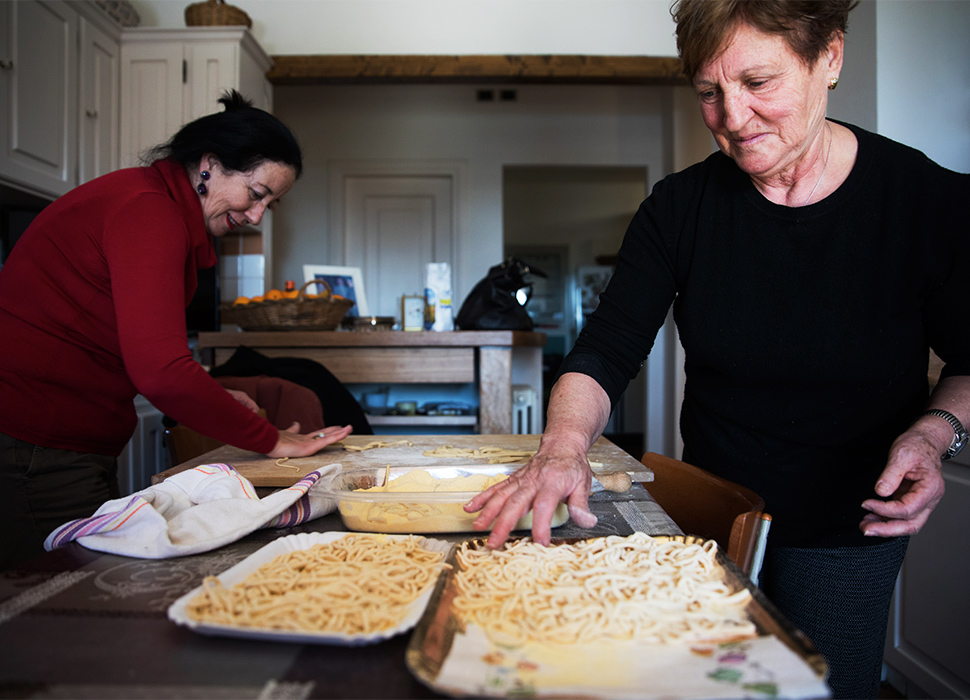 He finds the idea that a fancy restaurant in London has started selling pici hilarious. “It was very funny even when they started selling it in Florence,” he says. “In London, I know there’s everything, but it’s weird because pici is not well known in Italy either.”

Back in the village of Celle the next day, I’m finally ready to try the real-deal pici for the first time. Stefania Gori is the local doctor and the current president of the Società Filarmonica, which runs the pici festival. She wears big amethyst earrings and a red fur coat while she tells me the history of the Sagra dei Pici. It was her father who started the festival to sustain the Società Filarmonica’s musical ambitions. “I used to make the pici as a child,” Stefania says, “but there were no food festivals at that time. This was one of the first, before the trend exploded. Fifty years ago, Italian people were looking for more refined foods.” 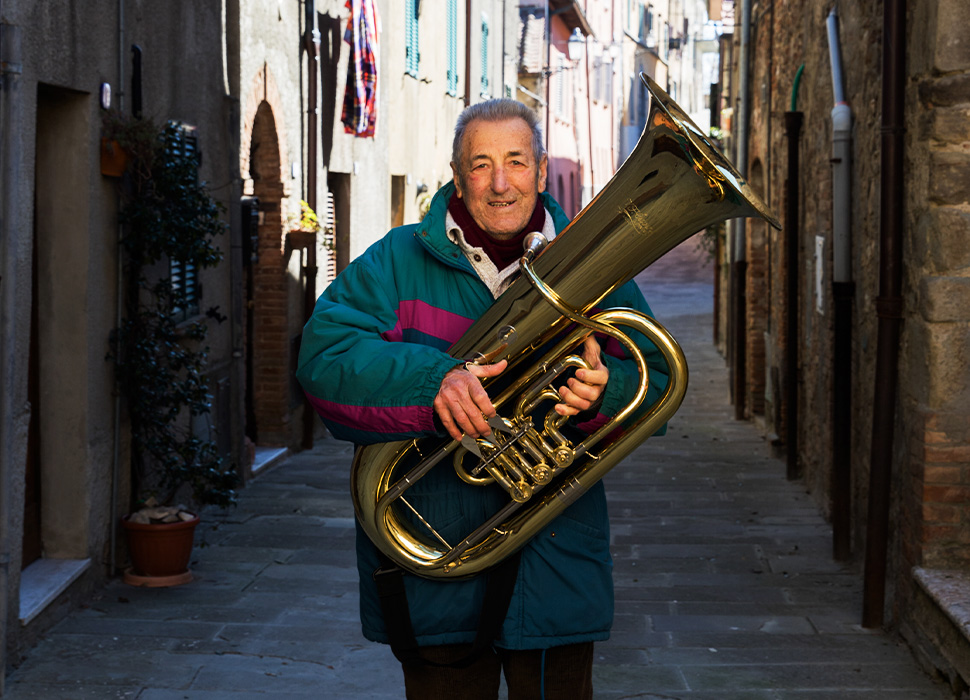 For the villagers, it’s an afternoon of memories. Giovanni, an 82-year-old brass player (pictured above), is the oldest member of the Filarmonica band and was at the first pici festival. We pore over pictures from the 1960s, showing young women at the festival in traditional garb. “They were all beautiful girls,” he says with a twinkle. Then, sadly, “We have lost so many important people through the years and the number of people living here has diminished.” There are now only 300 inhabitants in the village.

There is music, of course, and dancing and drinking. There is a traditional dessert of zuccherini di magro, a wine and olive oil biscuit, served with sweet dipping wine. In 2018 they plated 5,000 pastas with the help of 100 people. For the 50th anniversary they were keen for even more people to attend.

“This festival requires the help of many people – it’s the heart of the village,” says Stefania. “The world is increasingly mixed and this is a form of integration. Being a small town in Tuscany, we do not have many foreign people living here. But they are starting to come: Filipinos, Romanians, Danes, Greenlanders. During the Sagra dei Pici, everyone works together. Even people who have gone, they come back to make pasta.” 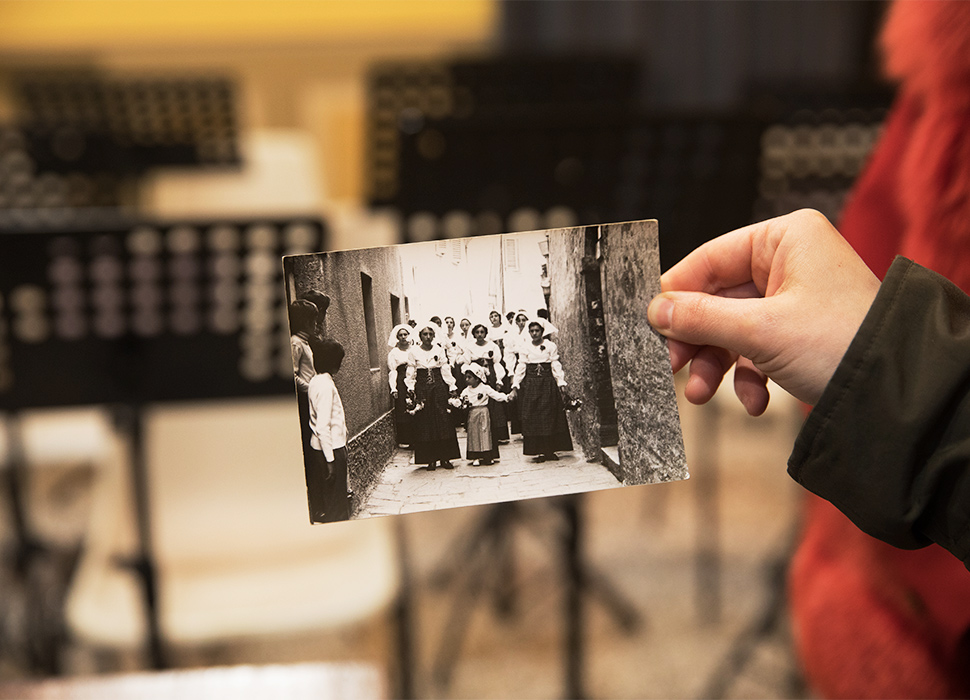 Tangible memories from festivals gone by

At Stefania’s home in neighbouring San Casciano dei Bagni, a white dog greets us and a fat cat lounges under the table. Like many of the villages and towns in the area, it’s not much more than a square, a church, one or two restaurants and breathtaking views over the Tuscan hills. Stefania has brought me here to meet her friend Meloni Nara, who’s going to show me how to make pici.

The dough is warm, well-kneaded and elastic, made with typically Italian, extra-white 00 flour, plus semolina, extra-virgin olive oil and water. Meloni cuts it into strips and starts rolling with two hands, joined by Stefania to speed up the process. Her pici are much smaller and neater than any I’ve ever clapped eyes on before.

“This is why we always have so many people who come to eat our pici – because they are 100% handmade,” Stefania says. “Often, in order to increase the incomes, semi-finished products are sold, pretending to be handmade. At Celle, it’s only real handicraft. The sauce is made every day by women in the kitchens. They make it in the morning to eat it in the evening, fresh.” 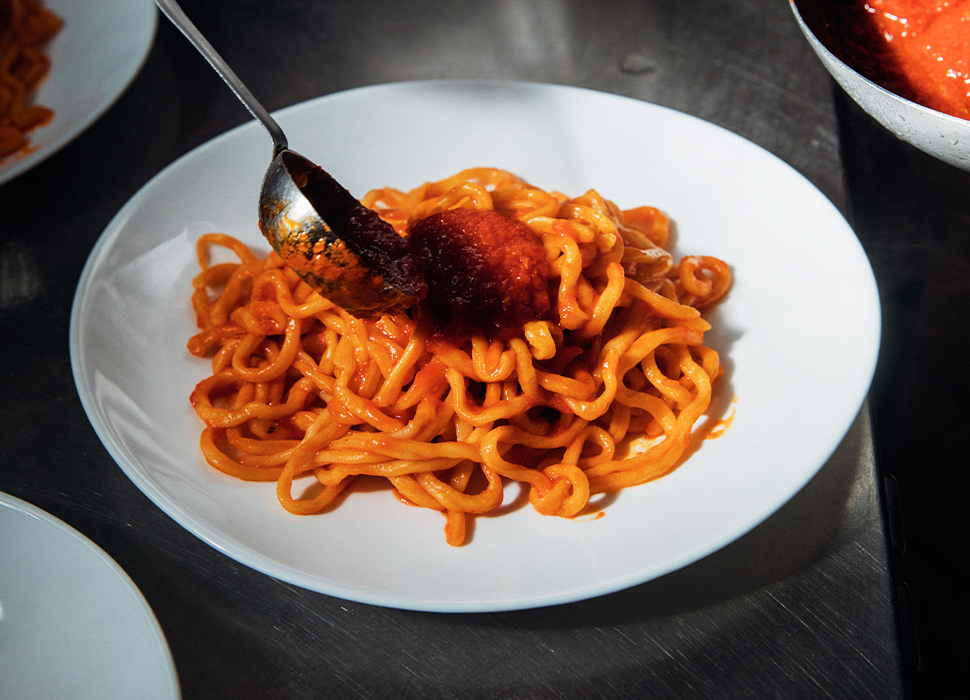 A bowl of fresh pici all'aglioni

Stefania tells us we need to visit Al Chiaro di Luna, a restaurant just outside the village, where owner Giorgio Seriacopi and his cooks make pici for the festival each year. Today they’re whipping up pici all’aglione – one of two dishes served at the festival (the other is a beef ragu). Aglione is a type of giant garlic with a milder, sweeter taste, known appropriately as ‘kissing garlic’.

After popping fresh pici on to boil, one of the restaurant’s cooks, Maria, tends to the tomato-based sauce on a low heat, using  a bit of pasta water to loosen it. Adding the pici itself, she tosses the pan to mix it with the sauce, plates it up as it’s steaming and puts a little extra sauce on top with a swirl. When I try to put Parmesan on my pasta, it’s almost snatched from my hand – this is not the way. 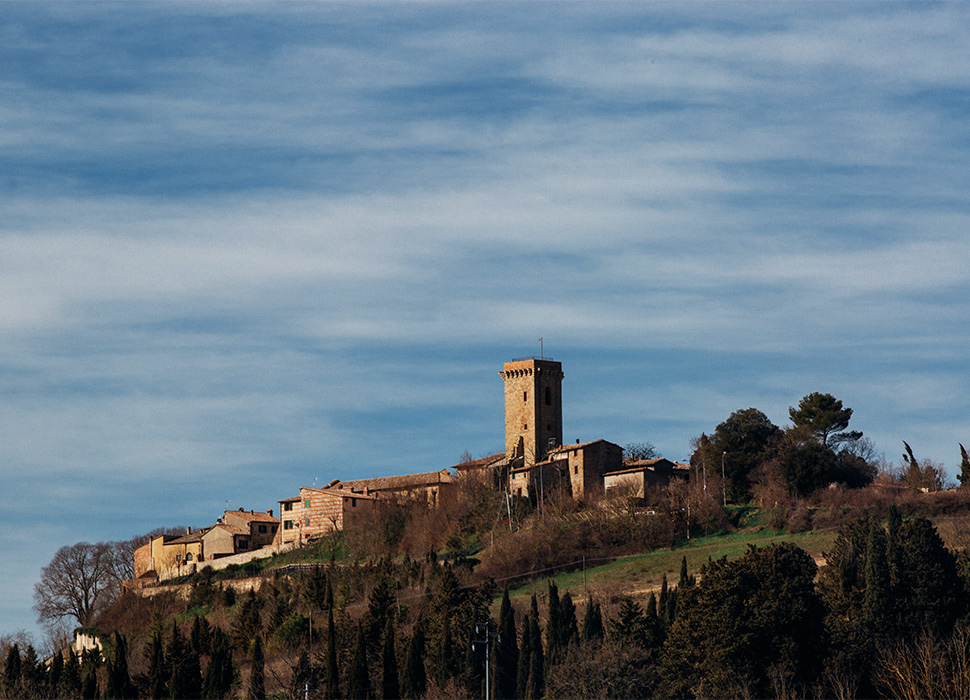 On a Saturday night the restaurant gradually fills up until it’s packed with pici fans. The dish still brings the community together, even as that community diminishes. A third of Italy’s villages are at risk of depopulation and even extinction. But they’re quiet, postcard-perfect and welcoming. Even if you’re not a wine connoisseur or a foodie, you’ll find a lot of love in  the Tuscan hills.

“In the province of Siena, each little town stands up for its pici, but ours is undoubtedly superior,” Stefania says. “We’re trying very hard to get recognition for Celle. This is not easy, because in Italy there is so much bureaucracy. For the moment, the best recognition comes from our guests.”

I’m beginning to see just what pasta means to the people in this region, but it’s best summed up by Agnese Carletti, the mayor of Celle sul Rigo. “For us the festival is everything,” she tells me back in the village’s sunny square. “We are pici.”