The Dolomites include some of Italy's most famous cycling climbs / All images: Tim E White

Easy rider: why e-biking is on the up in South Tyrol

In the north of Italy, an e-bike sharing scheme puts the sky-high peaks of the Dolomites in reach of the everyday pedaller. We plug in and ride out

The Dolomites include some of Italy's most famous cycling climbs / All images: Tim E White

It’s a hot Italian summer’s day, and I’m cycling 100km through the Dolomites of South Tyrol. Roads go either up or down here. They’re never flat. So the route includes 2,900m of ascending some of the sharpest climbs in European cycling, like the famous Passo delle Erbe and Passo Falzarego. It’s probably the hardest thing I’ve ever done in my life, and I’ve tried to return a rental vehicle to the car hire terminal at Naples Airport. The scenery, when I have the energy to look up now and again, is as breathtaking as the effort. The Dolomites are nature showing off: meadows of colourful wildflowers, forest-clad hills, snow in the winter and sun in the summer, and rising above it all, those massive craggy peaks, awesome in their bulk. 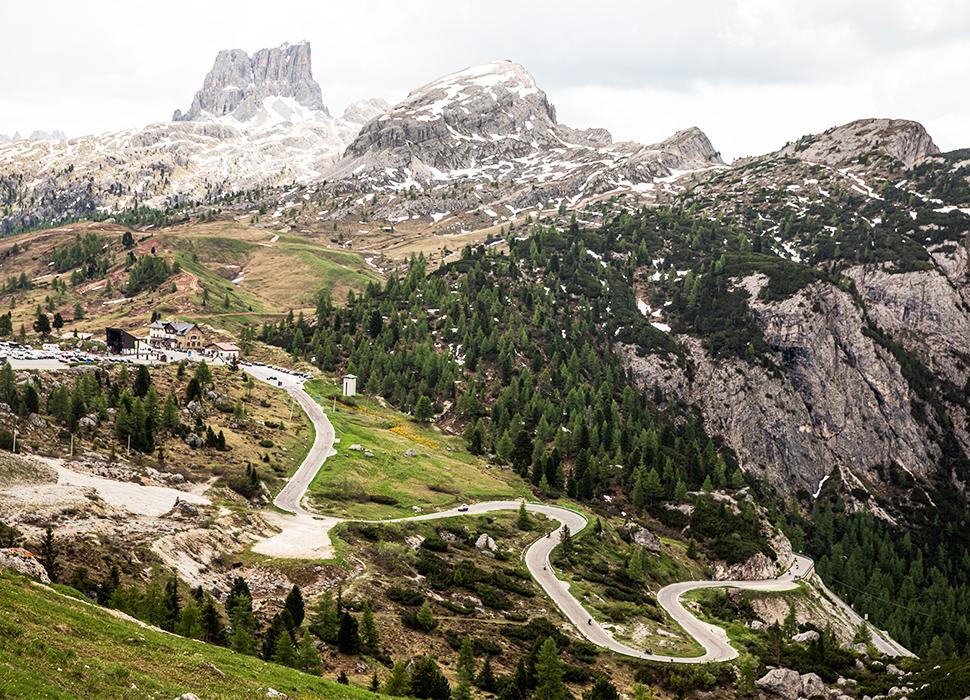 There’s something else, though, making the struggle even greater. As I grind my way up the slopes, cursing myself for attempting this, I’m passed again and again by gently humming bicycles, their chatting and smiling riders barely breaking sweat. There’s a revolution going on – people are going electric.

Not so my riding companions, two iron-thighed men of the Dolomite Biking guide team, with crisp tanlines and shaved calves, the embodiment of sprezzatura on two wheels, making molehills out of mountains. They know every gradient and curve of every road, and are there every time I’m ready to turn back to the hotel. “It’s not far,” one of them, Rene, tells me. “Just over this hill and along the valley.” Which actually means about 30km and another hour-long slog upwards that has me wondering if it’s OK to cry in front of him. The idea of electrical assistance seems very appealing at this point. 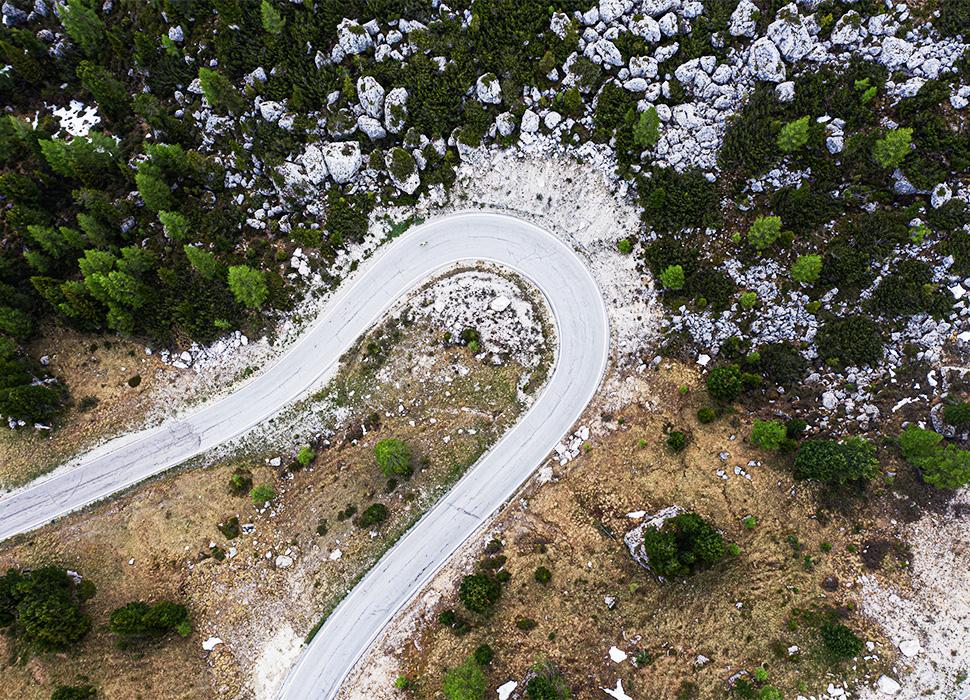 Being so close to the Austrian border, South Tyrol isn’t like the rest of Italy. The culture’s a curious mixture of Italian and Germanic, which means, if you don’t mind a cliché, passion and efficiency. Or, more prosaically, good food and good beer. And it’s a cycling paradise, in particular the Alta Badia valley – at least after the snow melts in May. This is the start and end point of the annual Dolomites Bike Day, when roads are closed to vehicles and cycles of all sorts are given free reign.

As well as the high passes seen on numerous editions of the Giro d’Italia race, South Tyrol is crossed with superb mountain-biking trails and there are miles of gravel paths too. Those guides are on hand for any routes, and bike-friendly hotels offer secure parking, hearty breakfasts, local insight and all-important post-ride massages. And now, summer visitors can jump on a gondola to the grassy plains 2,000m up and take advantage of a new local e-mountain-bike sharing scheme. It’s the perfect opportunity to see what handles the inclines of the Dolomites better – my legs or a motor. (Though by now I have a good idea.) 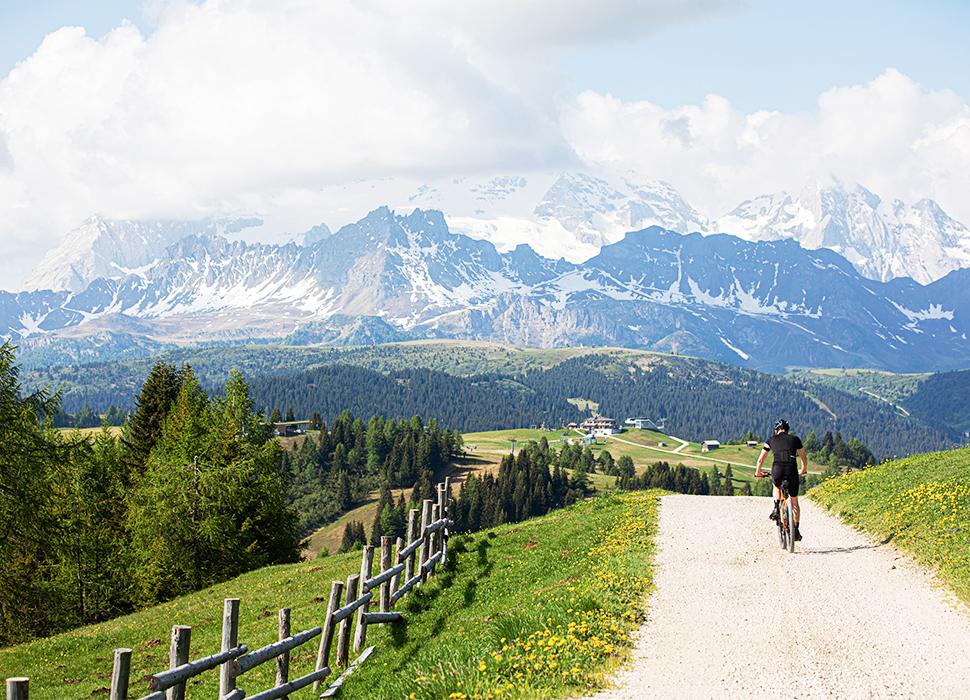 The scenery in South Tyrol is stunning

The next day, on the e-bike, as I rocket up gravel tracks and over steep ridges above the village of Corvara, thrilling at the speed while actually being able to take in the sublime scenery, it’s clear there is no contest. There are three pick-up/drop-off charging points across the area, meaning a day could easily be spent rolling around the peaks, stopping for a coffee and strudel (that Austrian influence) and drinking in the views. The Alta Badia e-bikes are made by Trek and are indistinguishable from normal models save for the giveaway bulges holding the powerful movement mechanism. They’re ‘pedal-assisted’, meaning you still have to actually do a bit of legwork before the Bosch motor kicks in, but their 500 watt-hours battery is enough to tame even the jaggiest Dolomite (especially on the turbo-charged ‘POWER’ setting) – and they’re enormously fun. 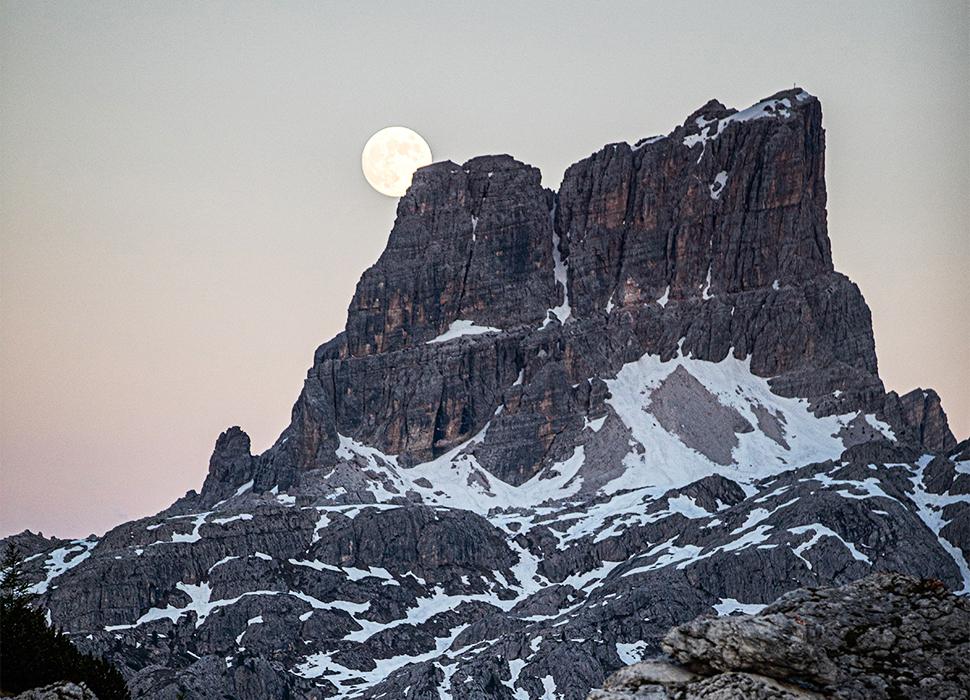 E-bikes have been around for decades, but in 2021, a few factors are combining to send their sales charts up, up and up – better battery and motor technology, friendlier prices, the need for greener modes of transport. Increasingly, they’re finding their way out of cities and on to mountains like these. What’s more, you don’t even have to buy one to get involved. From Scotland to the Balearics, new schemes are letting the e-bike-curious hop on a saddle and get physical with a lot less effort. And 2019 saw the first Verbier E-Bike Festival, in the heart of the Swiss Alps. Another first is cycling’s governing body – the Union Cycliste International – hosting an e-bike category in its MTB World Championships the same year. 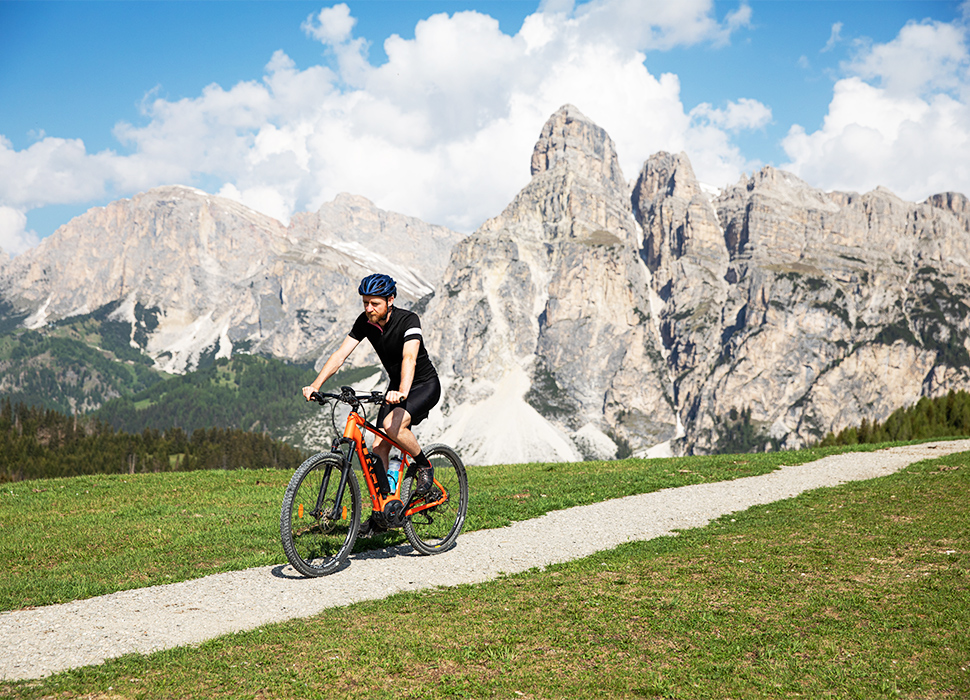 There’s one word that crops up most often when someone mentions electric bikes – ‘cheat!’. There’s an assumption among purists that, because riders are delegating some of their work to a machine, they’re breaking unwritten rules about how people should behave on a bicycle. But I see plenty of e-bikers savouring the Dolomites in a calm and bearable way, with hardly any grimace or toil. If fitness or lack thereof is an impediment to this kind of activity, what’s wrong with a helping hand? 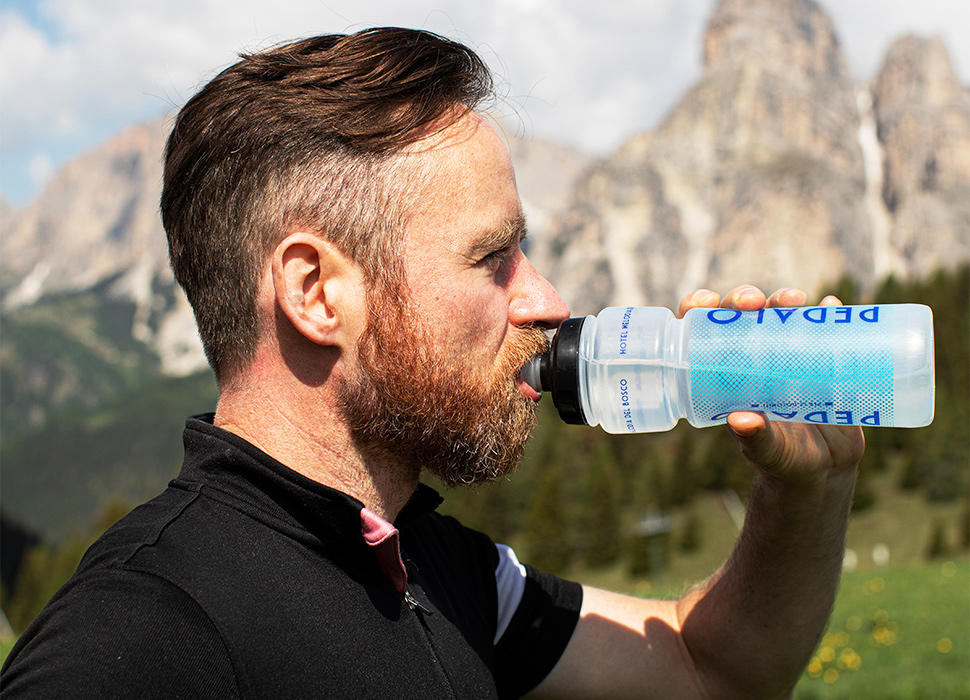 Our writer hydrates in front of another rugged peak

After I reluctantly return the e-mountain bike and gondola back to ground level (which around here is still 1,000m above the sea), I decide to have one more pass at the Passo Falzarego, only this time on a road-specific e-bike hired in the village of San Cassiano. They’re available to rent in several of the shops in the region, alongside the traditional type. Is it easier? A lot. Is it as much fun? Almost. Maybe the satisfaction that comes from willing your body up a mountain isn’t there, but the enjoyment from breathing the Alpine air, taking a bit of moderate exercise, spending time surrounded by some of the most dramatic nature in Europe – there is masses of all that. If the revolution will be motorised, I’m in.