A slab of lasagne at Sfoglia Rina

The best restaurants in Bologna

Italy is, obviously, a top-tier eating country – and there'a an argument to be made for Bologna being its finest foodie city. These are the best restaurants in the capital of Emilia-Romagna

A slab of lasagne at Sfoglia Rina

‘The Fat.’ ‘The Red.’ ‘The Learned.’ Known by many names, Bologna is the enthralling capital of Italy’s northern Emilia-Romagna region. But it’s as a culinary cradle that the city is most readily renowned, and a history of food runs richer than ragù through the ancient porticoes and trattorias of Bologna’s Medieval streets.

By all means put food first, but there's loads more to see in this city. Here are the best things to do in Bologna.

Or focus on your stomach in an even more specific way, by taking a pasta crawl in the home of bolognese. 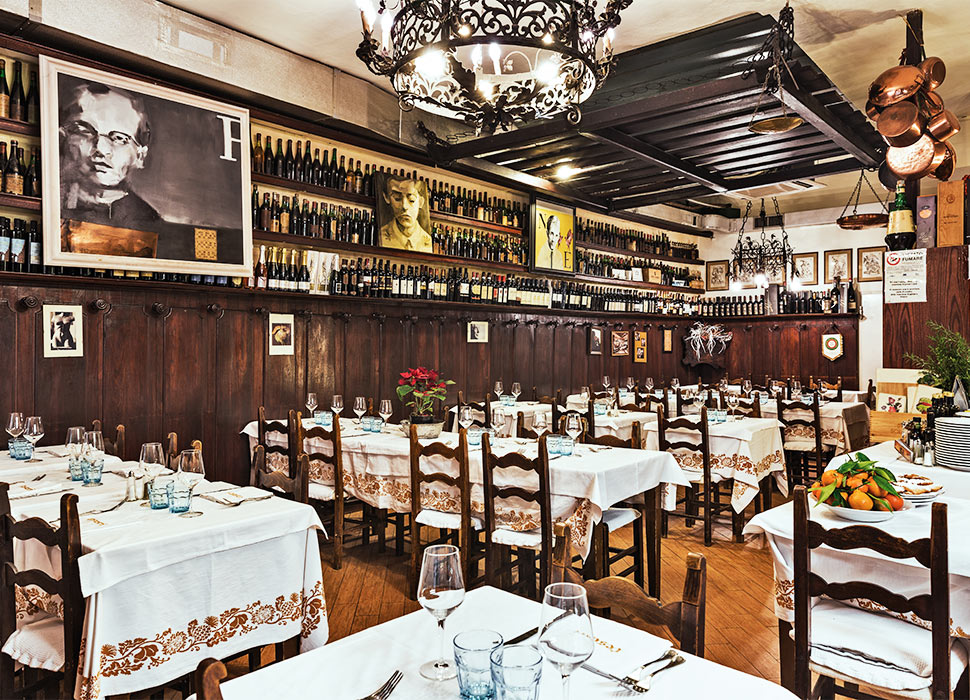 The Cesari family have owned and run this site in the historic centre of Bologna since 1955 – decades later, the kitchen is still fired up with traditional recipes and a relaxed, modest atmosphere. With 60 seats in its main dining room, the emphasis at Da Cesari is on quality not quantity. Though the wine list is long, the menu is compact but rich – full of seasonal, time-honoured pasta dishes, marked by local ingredients and complemented by a toothsome selection of dolci di casa. 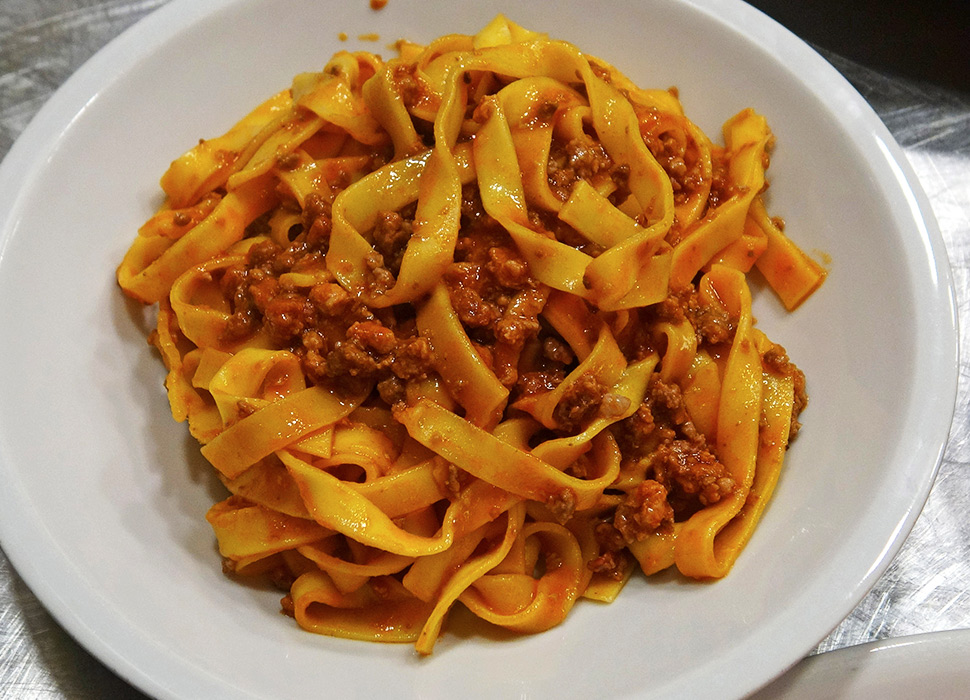 Tagliatelle al ragù alla Bolognese is a must order

It’s no frills eating and seating downstairs with an authentic, tavern-style vibe at this local classic. It goes without saying that if the homemade tagliatelle al ragù alla Bolognese is on offer you go for it (when in Bologna and all) but save space for a traditional secondi piatti. If you’re drinking, wash it all down with a cold birra alla spina to soak up the convivial, osteria spirit.

A quintessential Bolognese bistro, Antica Trattoria “Spiga” serves classic food in an intimate, family-run setting. The primi piatti here are arduous to choose between: traditional tortellini in brodo comes highly recommended, but if you’re after something from the wider Emilia-Romagna region opt for the gramigna con salsiccia, a pasta dish featuring deliciously sautéed sausage. Don’t forget to order the fried Parmesan to start, and finish with the fritelle di ricotta with forest fruits, made fresh in the kitchen. 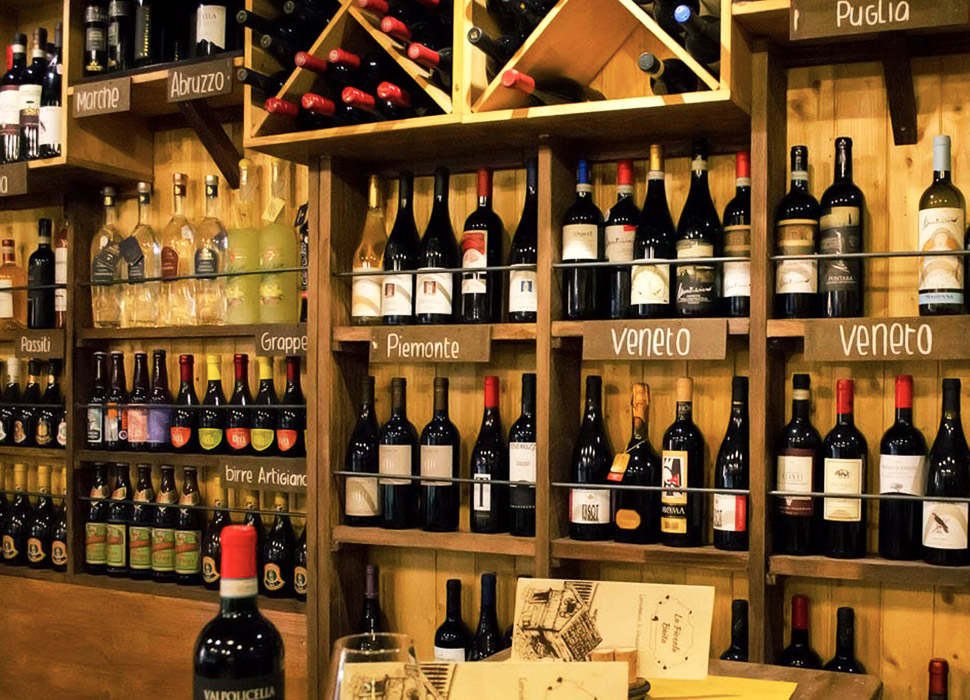 Cushioned under the porticoes on Via Saragozza, just outside the city walls, this quaint but formidable ‘small hut’ is anything but. A deli-style café specialising in local meats and cheeses, it’s the perfect place to replenish yourself on the descent back from San Luca. Share little tigelle breads and other rustic delicacies al fresco on the little terrace for a traditional aperitivo experience and definitely try some of the Lambrusco Frizzante – a sparkling, regional red with body.

If gelato were a prescription for the soul, this is one of Bologna’s greatest dispensing pharmacies. Arguably the best place for ice cream in town, this eponymous gelato laboratory on Via Santo Stefano serves up carefully crafted scoops with inventive flavours. With its apothecary-like interior, Cremeria has the charm of an emporium and the craft of an atelier. Try the Crema Libanese of orange blossom water, almond, and pistachio, or the Crema delle Zitelle, made with mascarpone and pine nuts.

Another traditional eatery and, as the name suggests, it’s an unpretentious spot serving homemade fare alla Bolognese. To open, plump for an antipasti plate of little crescentine, mixed cold cuts, pickled vegetables, and squacquerone – a regional soft cow’s cheese with a full-fat salty-sweetness. Try the lasagne or the maccheroni with wild boar ragù for the primi. Be brave with the trippa gratinate or the bollito misto (boiled meats, including tongue and cheek) for local-style secondi piatti if it’s on offer. 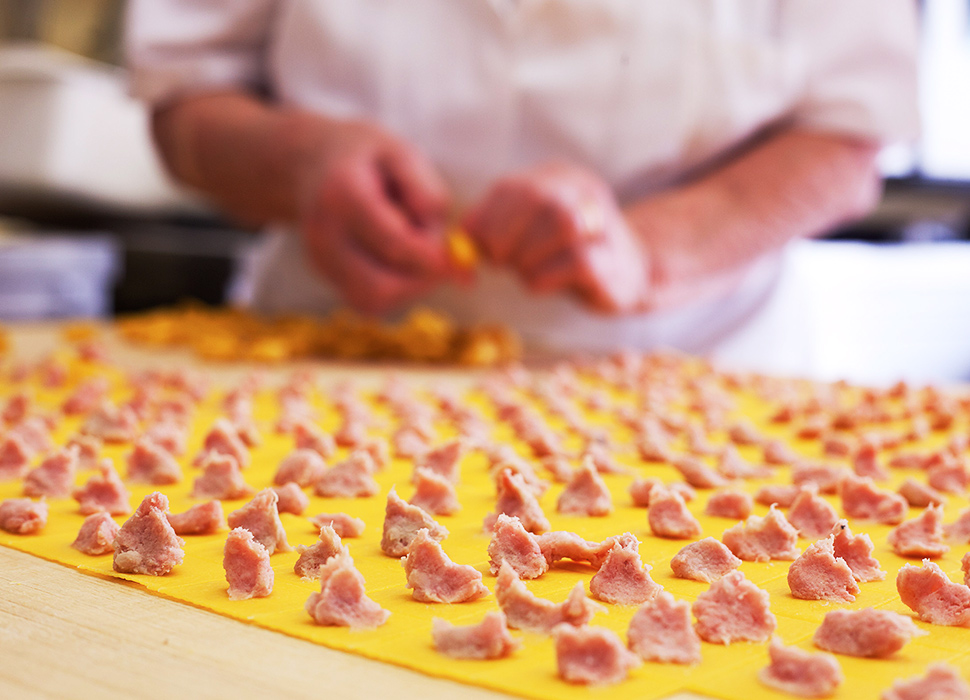 Pasta in the making at Sfoglia Rina

What began as a fresh pasta shop in the suburbs of Casalecchio di Reno in 1963 is now a casual, canteen-like place, run by founder Nonna Rina’s grandson Lorenzo and his wife. Here the blackboard menu is split in two: between classics of the Bolognese tradition; and weekly, rotating and more innovative, seasonal  dishes. You can order pasta fresca straight from the counter if you’re self-catering. There’s no reservations, so be prepared to queue.

Take another bite out of Bologna’s celebrated culinary history and book a table underground at Osteria dei Poeti, situated in the wine cellar of a 14th-century palazzo. Snug with vaulted ceilings, a huge stone fireplace, and subterranean charm, the cosy setting is half the fun. Classic Emilian cuisine is the order of the day here, with fresh pastas and gloriously pairable wines. Some evenings, the resonant catacomb-like space hosts live music, too.

Situated within Bologna’s pentagonal centro storico, lies the “ristorArte” of L’Arcimboldo. Sharing the Milanese artist’s talent for arranging edible ingredients into elevated compositions, this restaurant has a creative palette and a modern sense of taste. Choose from nine delicate antipasti, including the sfera vegetale with truffle tallegio and crema di cavolo nero. But it’s the main courses that really stand out: pigeon and scallops with whiskey blueberries and celeriac cream is just one example of the artistry on display. 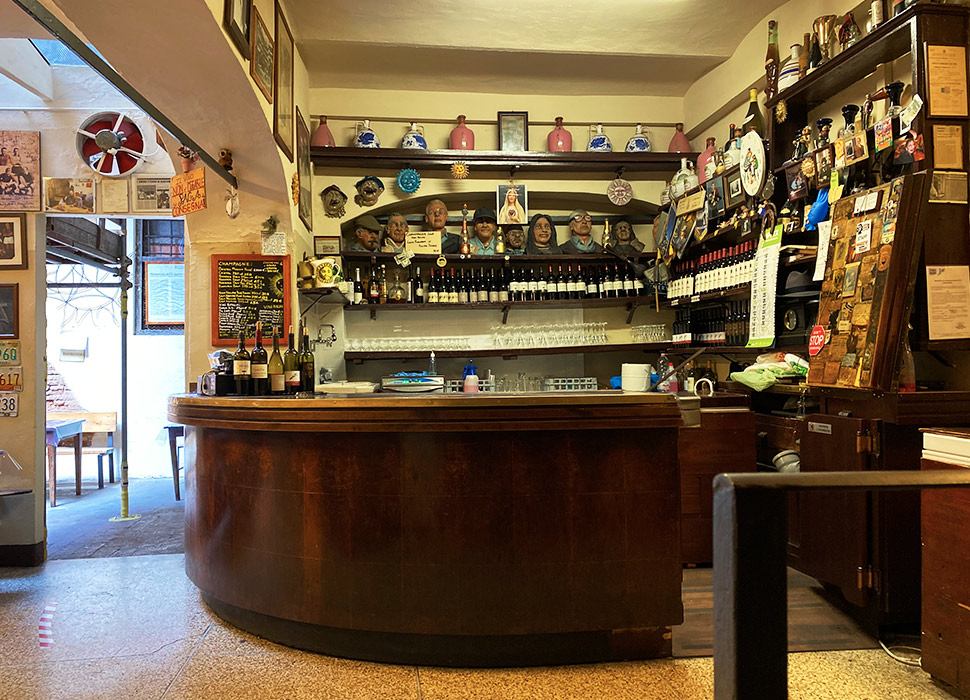 Food for the sole at this BYO Osteria

OK, this one is cheating, as it’s, er, not a restaurant. But you can eat here: you just have to bring your own food and, crucially, they’ll serve you the wine. Open since 1465, it’s the oldest osteria in Bologna; grab anything you want at the amazing Mercato delle Erbe, or from the Quadrilatero, and devour it in old-world ambience. The Chianti Gineprone suits most palettes, but if it’s a white you’re perishing for then pour out a glass of the Vie de Romans, a Pinot Grigio with coppery, floral notes.

Italy
Learn how to cook (and eat) like a real Italian nonna in Rome
Italy
Where chefs eat: Ombra's Mitshel Ibrahim on Rome
Italy
The best things to do in Bologna
Italy
Venice's best venues for when aperitivo hour arrives
Italy
Pull up a stool at these super stylish Milan bars
Sponsored

Italy
Learn how to cook (and eat) like a real Italian nonna in Rome
Italy
Where chefs eat: Ombra's Mitshel Ibrahim on Rome
Italy
The best things to do in Bologna