A typically classic scene in the old town of Modena / Credit: Adobe Stock

The capital of Emilia-Romagna is great – but its satellite towns have enormous appeal to Italophile travellers as well. We suggest five of the best day trips from the Red City

A typically classic scene in the old town of Modena / Credit: Adobe Stock

Bologna may be the capital of the area, but the beautiful north Italian region of Emilia-Romagna has an absolute abundance of cities, sights, and sensory banquets to offer visitors. The Italian train network is impressively swift and seamless, connecting Bologna with a host of prized destinations nearby. Here are some of the best viaggi di un giorno – just don’t forget to stamp your ticket before boarding.

All that schlepping got you hungry? Then take a pasta crawl in the home of bolognese.

And don't leave yet! These are the best things to do in Bologna. 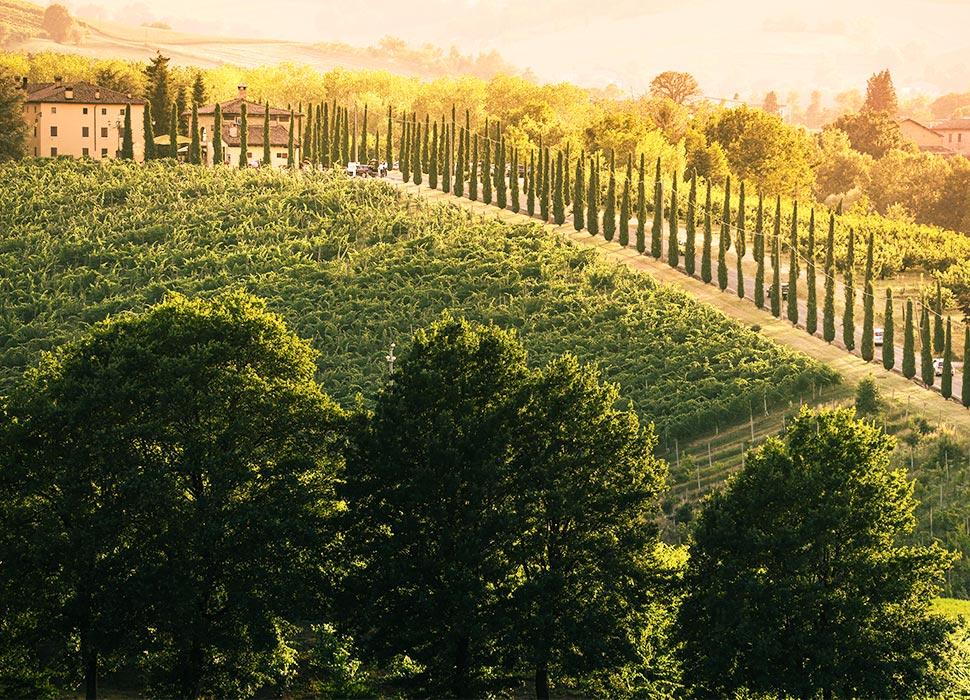 The city of gran turismos – home to such heritage car brands as Ferrari, Lamborghini and Maserati – Modena is the one of the core engines of Italian motoring. It's a little segue out of town, but for automotive afficionados, a visit to the Museo Ferrari in nearby Maranello is a must; and the Museo Lamborghini is less than an hour away in Sant'Agata Bolognese to the east. If you make it to the former then behold, too, the curvilinear structure of Maranello’s town library, opened in 2011 with the architectural panache of its Japanese and Italian designers.

But Modena is famous for more than just cars. The city's beloved balsamic vinegar has a rich lineage dating, apocryphally, from the 11th century. But it wasn’t really until some 700 years later that the word ‘balsamico’ first appeared, registered in the dynastic cellars of the royal House of Este. Since the 19th century, Modena’s “black gold” has been internationally appreciated and it was at this time that some of today’s leading producers set up shop. Check out the museum in Spilamberto to discover more. There are two types, but the aceto balsamico tradizionale (TBV) is the ultimate version: the grape is cooked, and must then be aged in barrels for at least 12 years.

Beyond cars and condiments, the Ducal Palace and the 11th-century Duomo di Modena are both well worth visiting, while the Galleria Estense houses work by Tintoretto, Velázquez, and El Greco’s 1568 Modena Triptych.

And then – more food. Modena is home to Massimo Bottura’s world-beating, three-Michelin-star restaurant Osteria Francescana, once ranked top of the World’s 50 Best. Or if you’re after something less exclusive (and eye-poppingly pricey), head to the Mercato Albinelli to see Modenese gastronomy at market-level. Look out for Bar Schiavoni and sample a peerless panino di cotechino (a kind of ace pork-sausage sandwich). 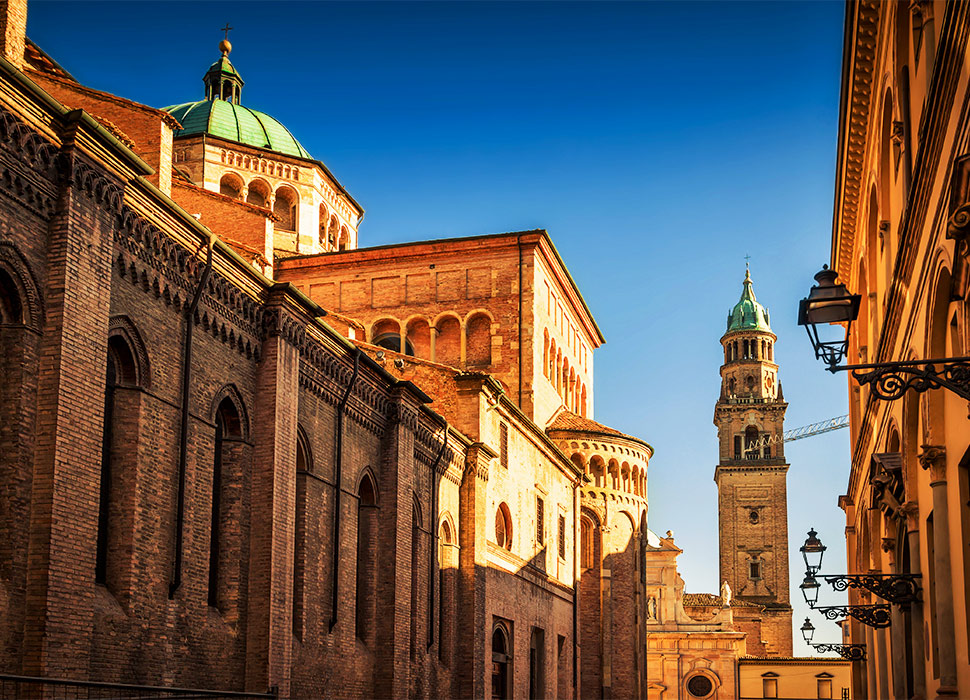 A gastronomic metropolis, Parma is both the city of prosciutto and one of the key players in the story of that king del formaggio: Parmigiano Reggiano. In fact, the cheese is named for a couple of its exclusive producing areas: Parma (hence Parmigiano) Reggio Emilia, Modena, Bologna (but only west of the river Reno), and Mantua (but only east of the Po) – it’s a tight inner circle.

There are over 300 dairies eligible to produce the cheese and at just under half of them are in the province of Parma: book a visit to one of them to learn more about the process and, of course, a tasting tour of high-grade, many-months-matured white gold.

Back on the streets, though, Parma is also a fashionista’s delight, and boutiques line the cruciform centre of Strada Giuseppe Garibaldi and Strada della Repubblica. Parma’s central cathedral is one of the most beautiful in Italy: don’t miss catching a glimpse of its heavenly, illusionistic vault fresco. Before you leave, consider seeing the all-wooden Teatro Farnese, built in 1618, and pay tribute to Parma’s native son, Giuseppe Verdi, by visiting the Teatro Regio – the city hosts an annual autumn festival to celebrate his operatic achievements. 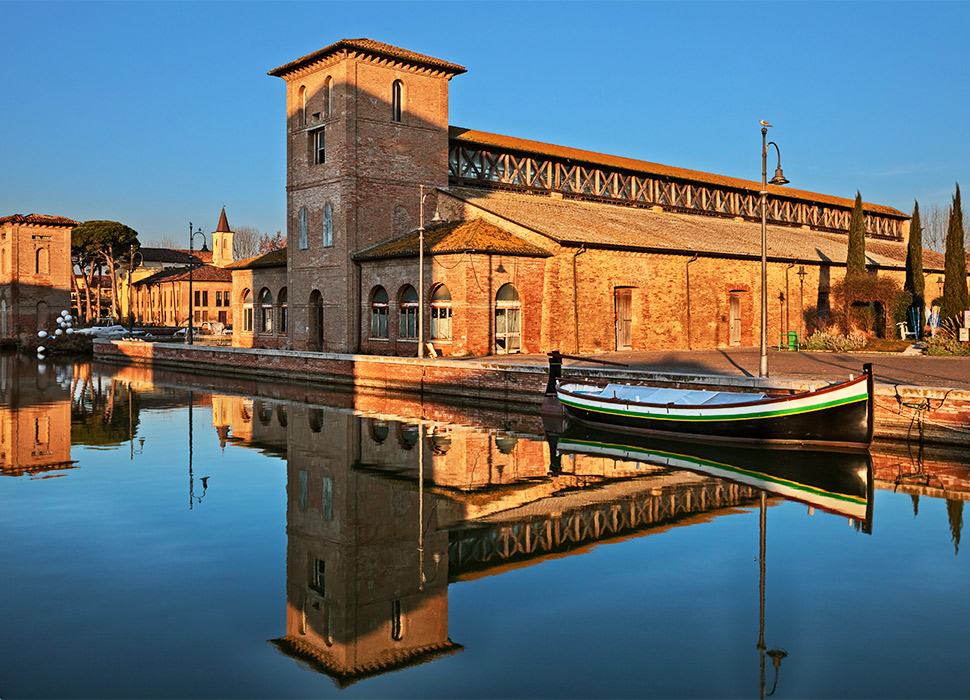 Historical splendour is hard to avoid in Ravenna / Credit: 123rf

Famous for its early Christian mosaics – which have UNESCO World Heritage status – Ravenna has existed as a city for thousands of years, ruled variously by the Romans, Ostrogoths and Byzantines over the eras. Beyond sightseeing through the mists of time, this compact and classically elegant city also hosts an annual summer festival of music and the arts. Since 1990, the Ravenna Festival has showcased modern performing arts, jazz, dance, classical music, ballet, and sounds from all over the world, studded into its ancient backdrop.

Beyond its shopping strade and piazze are eight monuments on the World Heritage list dating from around 430 AD to 549 AD. The octagonal Basilica of San Vitale is one of the picks of the bunch: the sublime ceiling and arch mosaics of the presbytery are truly a sight to behold. Check out the stellar ultramarine mosaics at the late antique Mausoleum of Galla Placidia – both Carl Jung and Cole Porter were inspired upon visiting this tomb to a dead empress.

Piadine are a traditional Romagnola flatbread and Ravenna is one of few places that will serve you authentic example – for a day-trip snack, make sure to refuel at La Piadina del Melarancio. 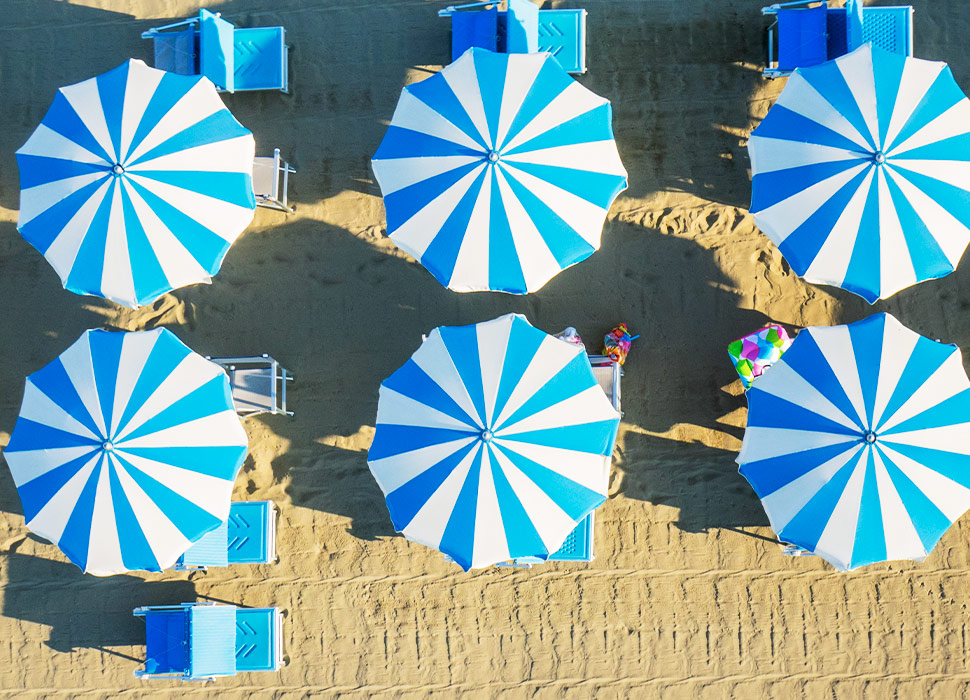 Rimini might be the classic Adriatic resort / Credit: Adobe Stock

Less than an hour by train from Bologna Centrale, this small city on the Adriatic coast is well worth the trip. The birthplace of prodigious filmmaker, Federico Fellini, and a cradle of Roman and Renaissance art, Rimini is full of culture. Housed in a centuries-old fortresses, a museum and exhibition space dedicated to the five-Oscar-winning director has been unfurled in the city: the Fellini Museum is a multimedia extravaganza.

As a destination, it’s perhaps best known as a seaside resort – the first bathing establishment opened in 1843 and the appeal of its amenable waters and wide, 15km beaches made Rimini a popular haunt for Belle Époque bathers. From elite vacationing to mass tourism, today Rimini is still in huge demand as a sandy retreat with waves of people flocking to its Blue Flag bays and hundreds of hotels every year. If you’re visiting in the summer, the Marina Centro and the Lido San Giuliano are at the vibrant heart of the promenade.

No trip to the seaside of old Romagna is complete without, again, a piadine. Fold up a warm wrap – filled with burnished leaves of salami or prosciutto, oozing with typical cow's-milk squacquerone cheese, and forested with green sprigs of rocket – and take a walk along the shore.

Full of Renaissance-era cultural elegance, almost every street and building in Ferrara trumpets its status as a UNESCO World Heritage hub. The fortress-like Castello Estense – the seat of the noble Este family – sits resplendently in the centre of the city with its moat, drawbridge, and fabulous interior. Under the patronage of the House of Este, painters and artists of all colours flourished here for hundreds of years.

Unsurprisingly, Ferrara also has its own culinary traditions. Don’t leave without sampling cappellacci di zucca – fragrant parcels of pasta stuffed with butternut squash, Parmigiano Reggiano, and nutmeg, served tossed in a sage-infused butter. The city is also home to the world’s oldest tavern: Enoteca al Brindisi has been serving since at least 1435, and probably even earlier.

When you get hungry from wandering around the architectural beauty of the strade, clamber aboard the Sebastian Pub – a floating, converted ship-as-ristorante that serves delicious pizza to the Ferrarese. Plump for the ship’s most-selected pizza, the 'Barbados' of prosciutto crudo, nuts, honey, wild rocket and burrata.

If you’re visiting in the autumn, the town hosts the annual Internazionale a Ferrara at the start of October, celebrating the Italian-language magazine’s staggering array of culture, politics, and current affairs.